28DL Full Member
So I had to throw this one up ASAP as I was bloody thrilled to have found this location!

The history for this report is mostly going to focus on the US Army’s logistical efforts in the UK during WW2. I could go into detail regarding the specific location & the local surrounding area due to it being a relatively popular spot for various US depots, POW camps etc during the war but I am going to be keeping everything quite generalised as I am not comfortable with giving any hints in regards to where this train is located due to the spotless condition it is in - there is no signs of vandalism, graffiti, or anything - apart from a fresh looking Costa coffee cup, whoever that was, if you are reading this, have some respect and take your rubbish home you dirty animal.

Okay so about a week ago I caught wind of a WW2 era US Army train crane that was supposed to be located around my local area. After doing some initial research, asking people familiar with the land, trains & railways etc, I had basically turned up next to nothing. I was surprised to had not heard of this train, and even more so when no one I had spoken to with knowledge had any idea of it's existence either.

I spent all weekend inspecting old train maps, researching the history of US Army Quartermaster depots around the area (there are lots!), cross referencing against Google Earth & speaking to locals to create a list of potential spots where I could find it. I spent an entire day walking old train routes, crawling through hedges and overgrown pathways, crossing off places from the list as I gave up at each location. Eventually I was starting to lose hope, and wondered whether the rumors I had heard about it being in this specific area simply weren't true.

So I made one final attempt at investigating the specifics of this crane - the model, the company etc, and looked to see if there was any mention of it within one of the local towns or villages etc. I finally found a very small mention of what I hoped to be the train I was looking for - I hadn't checked this area yet, and although it seemed like a slightly unlikely spot, there was still a possibility that i'd be able to find it there, and hey, I was starting to get a little desperate by this point!

It was getting to late afternoon on Sunday, and with my newfound hope & determination I set off to the place I was hoping I'd find this beast. So after crawling through more hedges & plenty of fields, and glancing at my phone occasionally to check I was still going the right direction, I appeared to have arrived in the area where I suspected it would be. And without going into too much detail, I almost accidentally ran into the train, as it was just the other side of a tree line I was walking parallel to! I had finally found the damn machine!

The US Army Quartermaster effort against the Rome-Berlin Axis began in the late spring of 1941, when American staff planners assumed that in the declaration of war, small ground & air forces would be established in the UK ASAP. Original plans contemplated a force of 107,000 men, including 87,000 ground & air troops, and 20,000 service troops. The British were (generally) prepared to let the Americans select Quartermaster sites, and to provide them with all the necessary facilities in full operating condition. However, it was impossible for the Americans to ignore local conditions - supplies had to enter British ports, and move over British railways and highways. Depots were to be located in existing buildings as far as was practical.


With the US entering the war in late 1941, time became the most important element in Quartermaster plans, which currently only contemplated support to one army corps, who were deployed in defensive positions. The US War Department announced as early as January 1942 that a 60-day level of supply, except ammunition, would be sent to the UK for US troops stationed here. Apart from the exploratory planning and prep that had taken place before 7th Dec 1941, little else had been accomplished for the reception and storage of 60-day levels. After the beginning of May, 1942, the US Quartermaster Corps had an expanded range of higher ranking staff, who would be responsible for overseeing the various main responsibilities, such as subsistence, administration, and supply.

Operation Bolero was the name used for the US military troop buildup in the UK, in preparation for the initial cross-channel invasion known as Operation Roundup, which was planned for mid 1943, or for it’s lesser alternative, Operation Sledgehammer, which was set to be executed in the fall of 1942 in the event of German setbacks, or to ease Axis pressure on the Eastern Front.

The entire operation began work in early May 1942 - it consisted of building hundreds of bases, airfields, warehouses, depots, hospitals, and storage tanks that would support the 3 million U.S. military personnel eventually coming overseas. The logistical planning of supporting such a large number of troops, machinery and equipment for the D-Day Normandy landings, and the continuance until the end of the war was crucial, and no easy feat. Materials such as soldiers uniforms, ammunition, food, fuel, medicine, vehical parts etc would all need to be supplied at the right time, the right place, be well maintained and readily available for military or auxiliary services.

General Quartermaster depots were spread all across the country, with some of the larger ones being in London and Liverpool. Most, if not all of them had rail links to the main railway network, making them very adaptable. There were also POW camps, ran by the US Army which were spread throughout the country too. From talking to some of the older locals, I was told that it was quite a sight seeing the mountains of supplies, especially the jerry cans all stacked up on one another. And then one day, everything was suddenly gone - turns out this was D Day.

Okay, so back to the explore - once I had arrived, there wasn't exactly a huge amount to see. There is the single train with it's carriages, and that is about it. No buildings around it etc. I still spent a good 2 hours practicing my photography and trying to capture as much of it's beauty as I could. I'm probably going to stop narrating/writing from here and just drop some of my favourite shots from the trip. So, without further adieu... here he is! 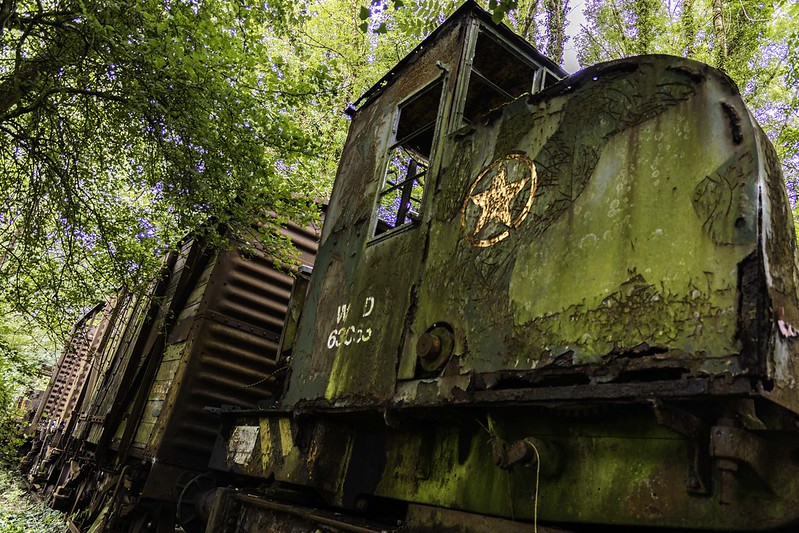 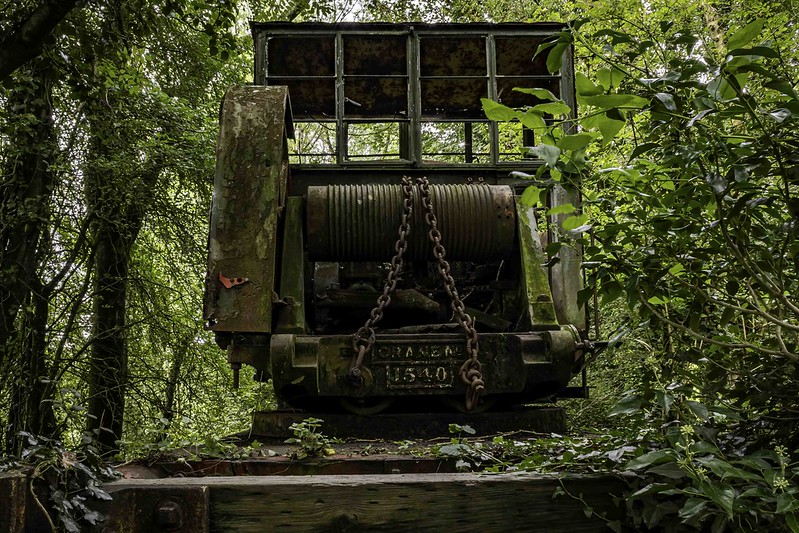 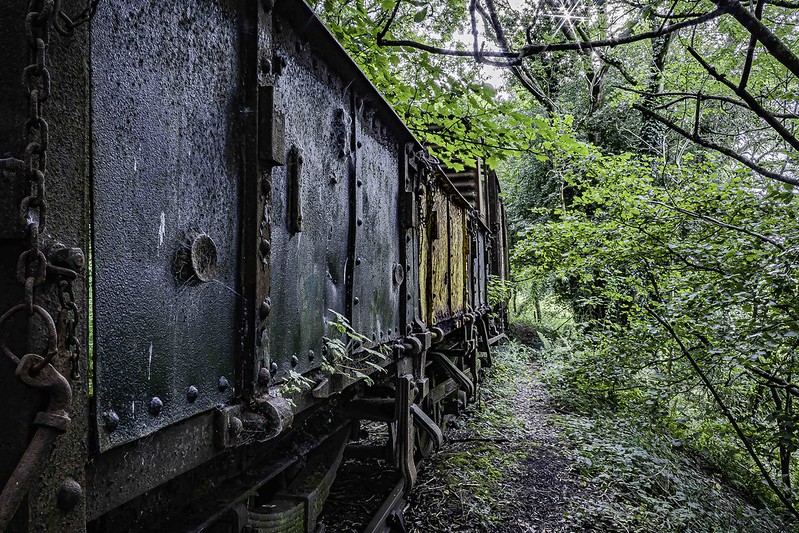 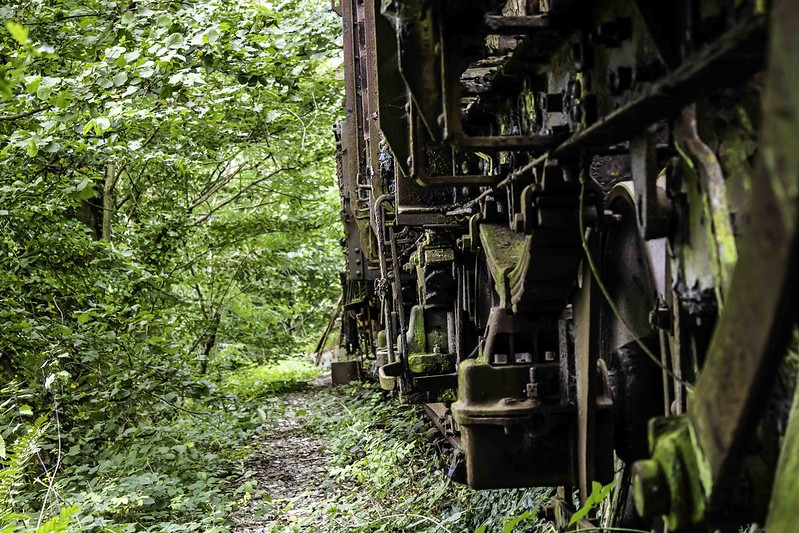 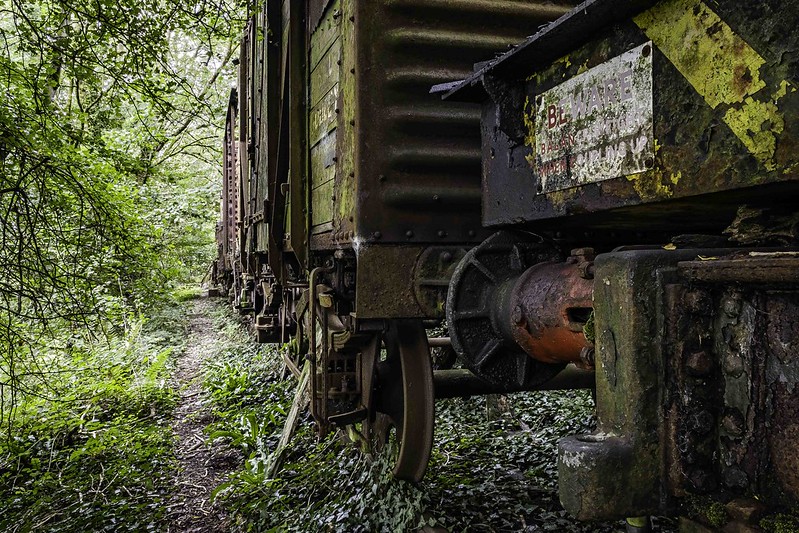 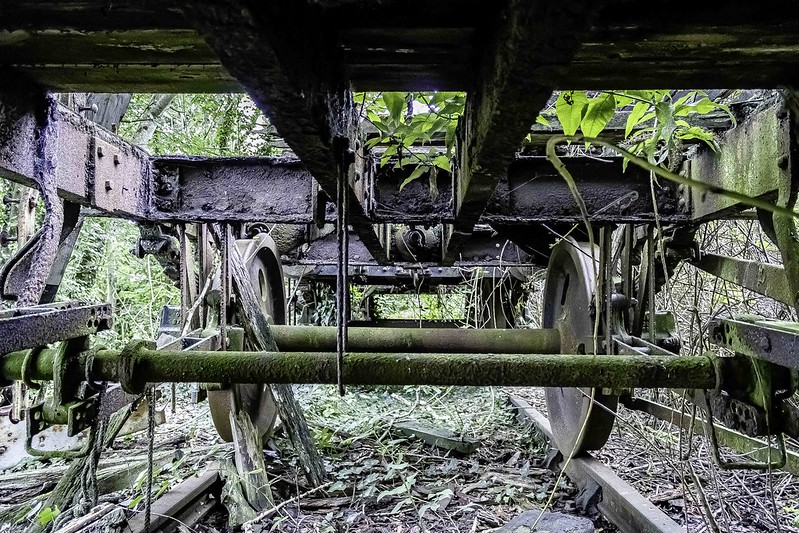 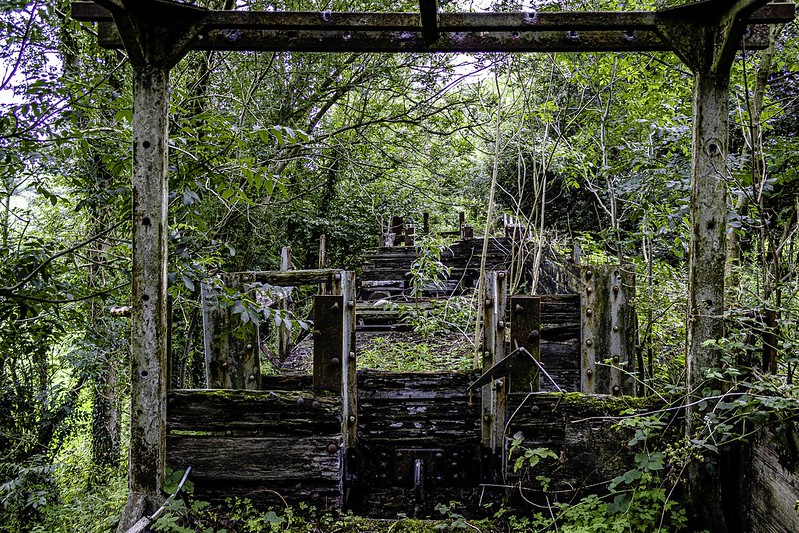 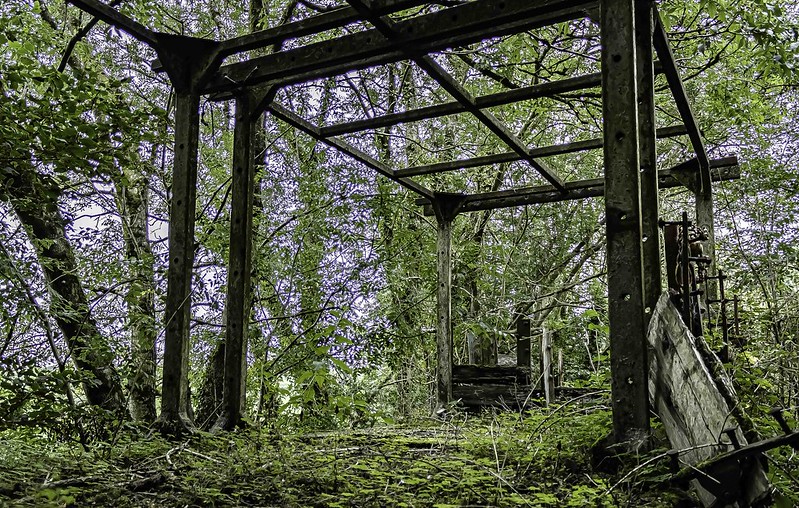 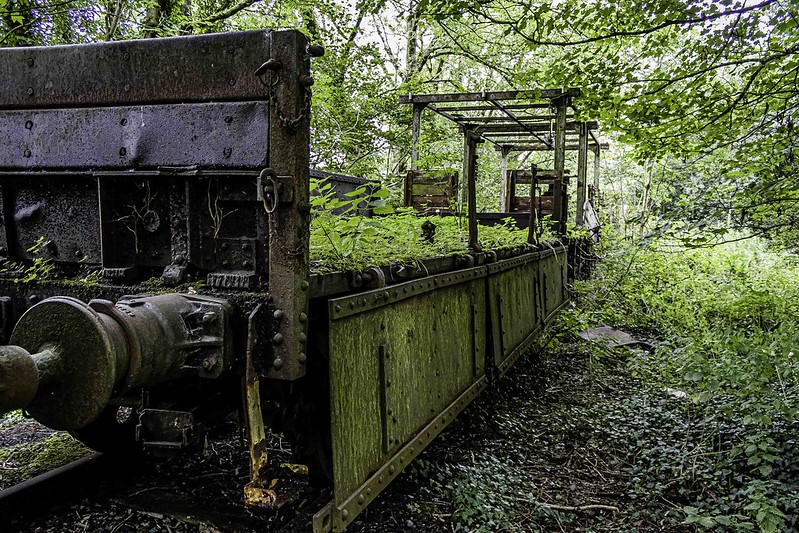 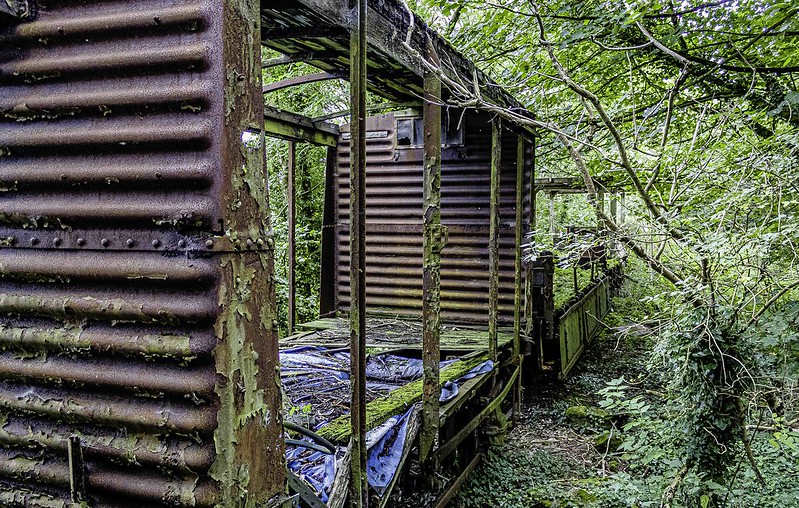 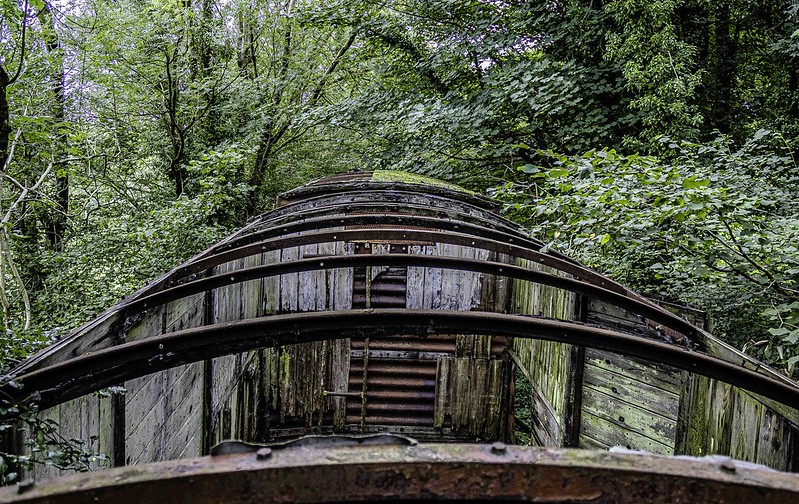 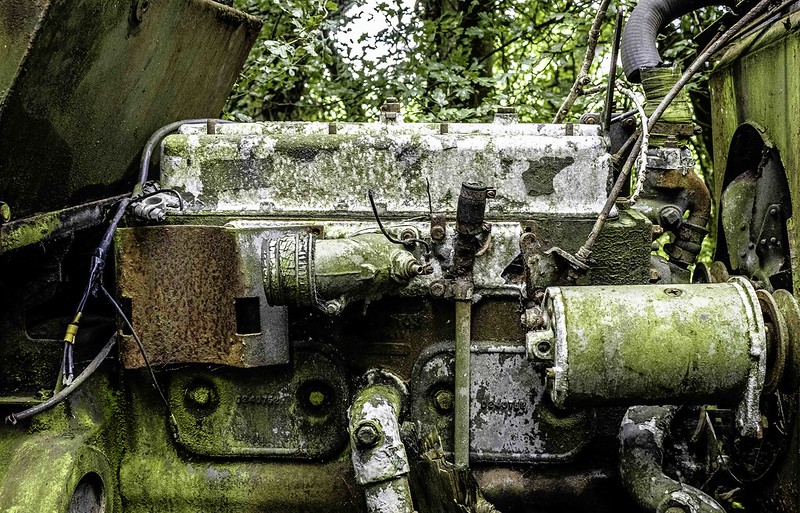 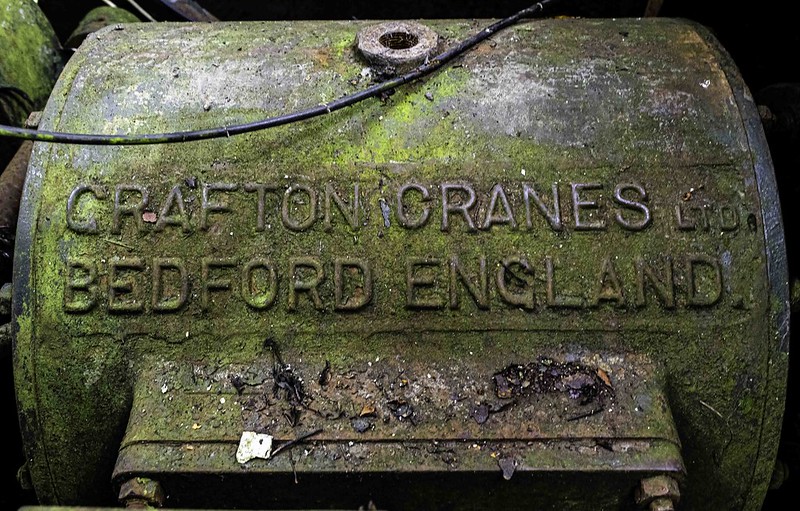 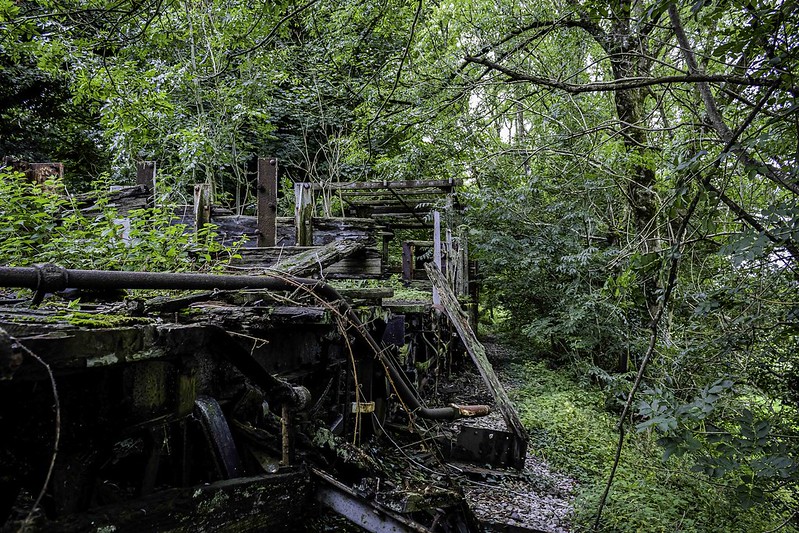 Okay, so I think that wraps up this report now! A very big thank you to anyone who has made it all the way through this, I hope I was able to convey my excitement & try and do this beast some justice! Again, I am fairly new to the site, and still honing my photography skills so any feedback in these areas is always super appreciated

28DL Full Member
This looks amazing!! I'm definitely going to have to find it for when I'm SW way next month!

Also I have to say, your write up is quite possibly one of the best I have seen on this site. Very extensive and history heavy which is right up my street!

On the astral plane

Regular User
Need to give it a proper title, but fab report...

HughieD said:
Need to give it a proper title, but fab report...
Click to expand...

What needs changing with the title? I was hesitant about putting anywhere more specific than SW UK as I'd like to protect the location
Instagram
Spotify
​

Regular User
A+ for effort on the report
Razorwire.rip

Imba said:
What needs changing with the title? I was hesitant about putting anywhere more specific than SW UK as I'd like to protect the location
Click to expand...

If it's a 'remote' location, it's normally the biggest nearby village/town/city

HughieD said:
If it's a 'remote' location, it's normally the biggest nearby village/town/city
Click to expand...

HughieD said:
If it's a 'remote' location, it's normally the biggest nearby village/town/city
Click to expand...

Imba said:
I mean, I've already had a lot of interest on the location, and a quick google search of that info above narrows the location down massively, whether your interested in railways or not! I tried to put effort into not leaving clues in my report, and I'd appreciate people doing their own research if they want to find the spot
Click to expand...

I wouldnt worry too much, Im all for protecting places but dont think there is a lot anyone can do in terms of damaging or stealing from something like this!
Stop The Planet, I Want To Get Off!

28DL Full Member
That is impressive, love old rusting infrastructure being overtaken/surrounded by nature. Your persistence paid off!!!!
W

28DL Full Member
More information about the crane - enquires were apparently made with Grafton some years ago about this crane. Grafton refused to accept they had manufactured this machine, on the basis that this crane's build number matched a crane which had been built for a ship which then sunk. The belief is that this crane was retrieved from the ship before disaster struck, and rebuilt for rail use. Further investigation suggests that it was rebuilt from a Steam Crane. Ex MoD - Bramley ammunition depot. It's been at it's current location since at least 2013 and probably some years before that.
You must log in or register to reply here.
Share:
Facebook Twitter Reddit Pinterest Tumblr WhatsApp Email Link