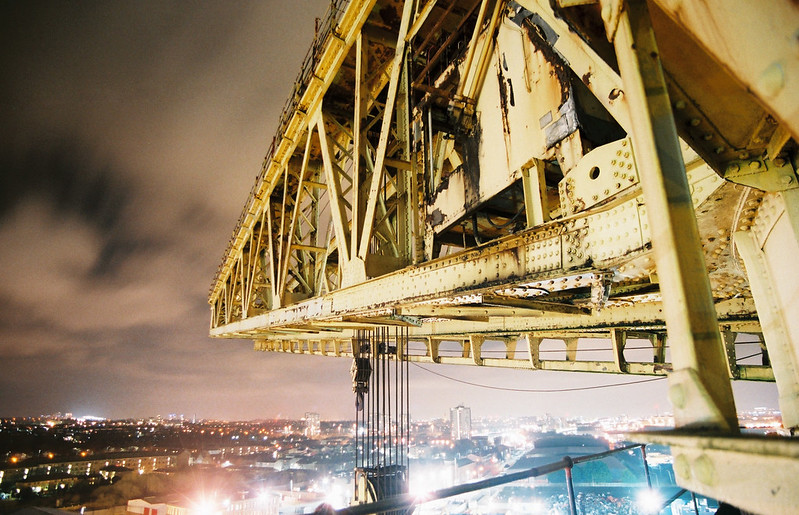 After checking out Longannet power station one damp evening last autumn, we agreed to head back over the border to Glasgow. With a straightforward plan to climb any/all of the huge cantilever dock cranes on the River Clyde we set off when the nights were darker and temps ice cold!


First, the titan crane at Barclay Curle’s Clydeholm yard. This has been described as a tough one to reach as it’s inside an operational scrap yard and next to a bus depot – it took us an age to get through the various yards – avoiding dogs, cameras and a dunking in the Clyde.


Of all the cranes we stumbled on the toughest first and set out climbing up the concrete base in search of the stairs. We managed this easily enough but marooned ourselves on the base for a good few hours, early on a security guard from the dock opposite was shining a torch at the crane waiting for a huge ship to load. After the security fella had left we heard the familiar drone of a helicopter and seconds later it flew directly over us with the search light putting out mega lumens – we didn’t say much when that happened. In the end we sat it out and waited for all the bus drivers to shuffle around, the cleaners wiped sick off the seats and we headed up the knackered staircase – shitting bricks as we’d had enough time to get the fear.


All the history is available on wiki so I’ll add a bit from each entry. Seawind Barclay Curle is a British shipbuilding company that was founded by Robert Barclay in 1818 and in 1876 the company relocated its yard to Whiteinch where the crane stands today. In 1920 the titan crane was constructed by the engineering company Sir William Arrol & Co – responsible for the Forth Bridge, Tees Transporter, Warrington Transporter & Jubilee Bridge. 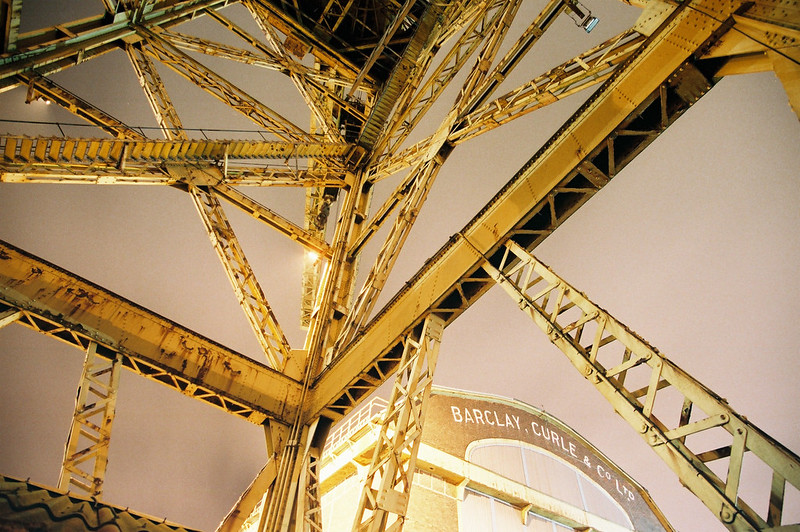 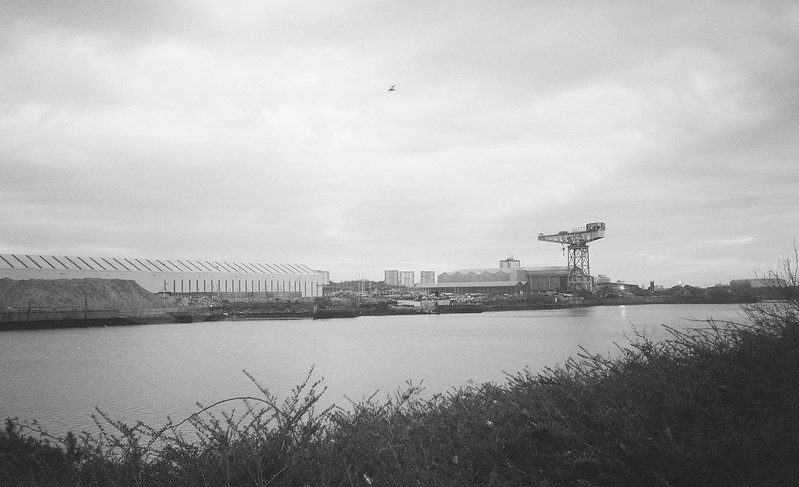 After the Barclay Curle and with time to burn we headed over to the Titan Clydebank. Completed in 1907 with a bill of 24 grand, the TC was again built by the engineering company Sir William Arrol & Co. It managed to survive WW2 only to fall into disuse in the 1980’s, luckily it was restored and opened to the public in 2007.


As this one is full of lights its quite hard to get it wrong but you do have to climb from the ground as the stairs have been chopped and lifted. It was quite a contrast to the previous crane as it didn’t fall to bits when you walked and every 10 seconds it changes colour! 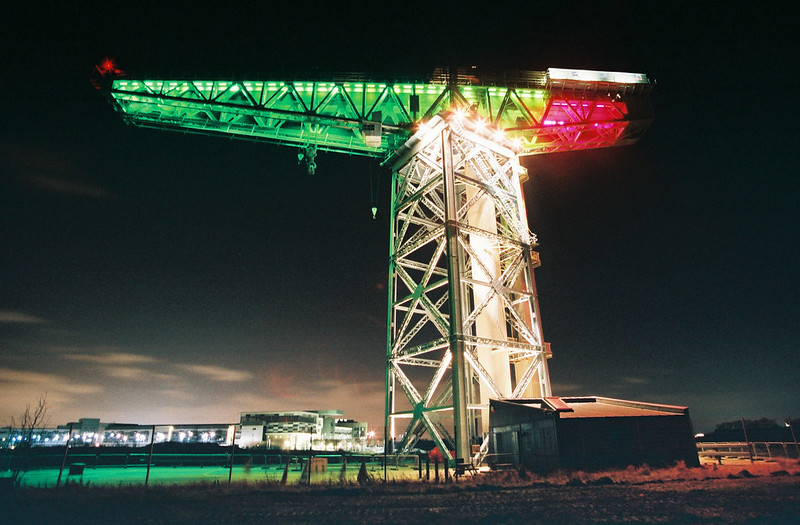 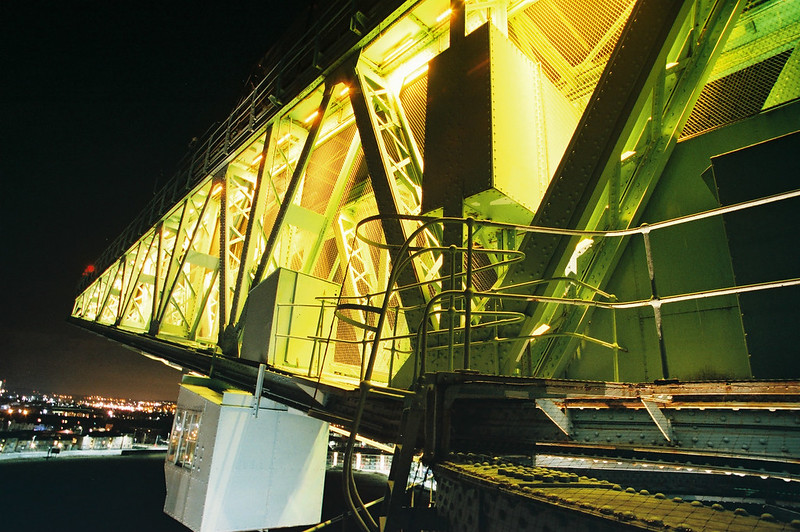 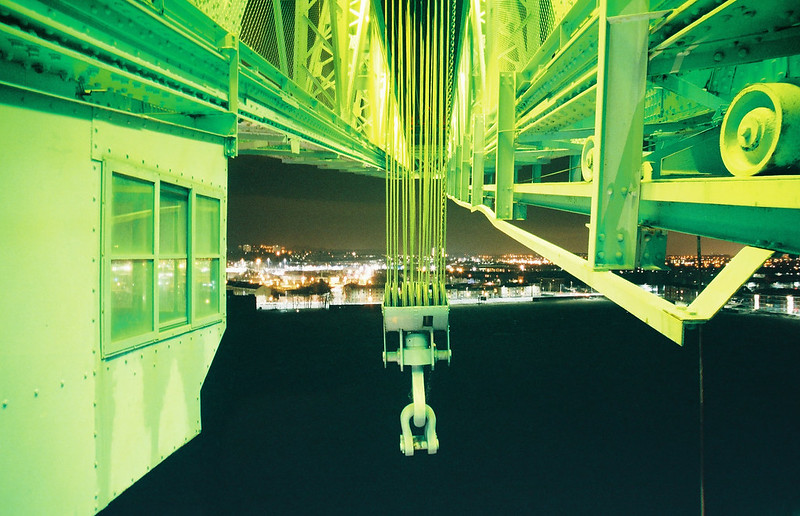 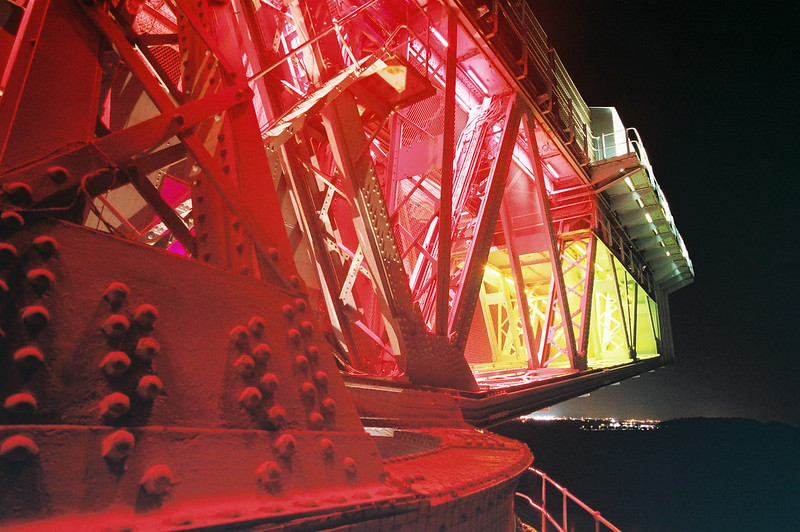 We crashed out after TC and with two cranes under our belts we could have headed home. Instead, we drove out to Greenock the following night and hopped up to the top of the James Watt dock crane. It’s category A listed, can shift 150 tonnes and was built in 1917 – like the others by Sir William Arrol & Co. I’m sure Nick’s are the same but the 400 speed fuji I had loaded struggled with the low light! 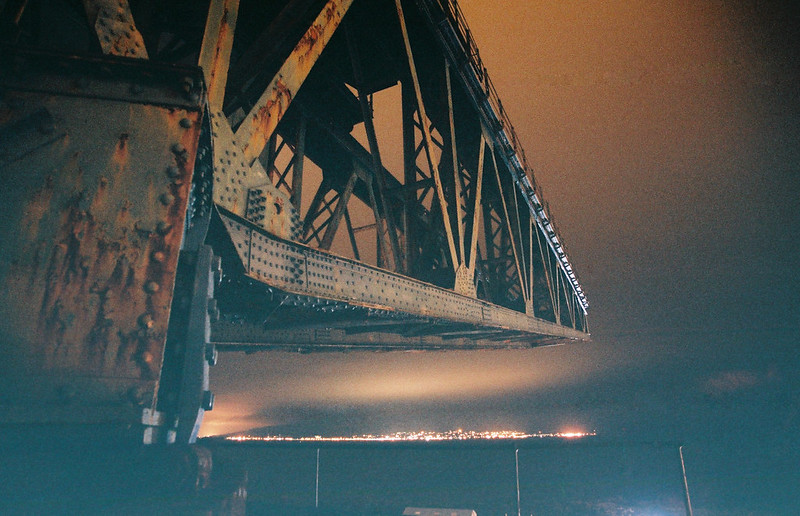 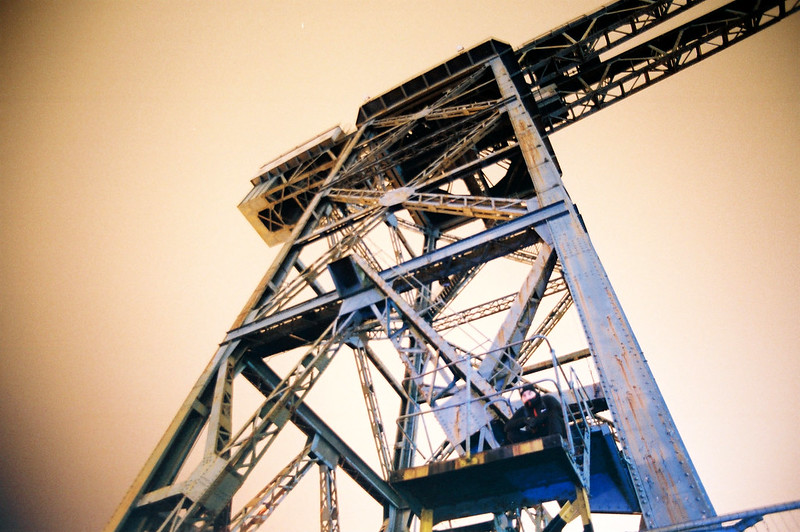 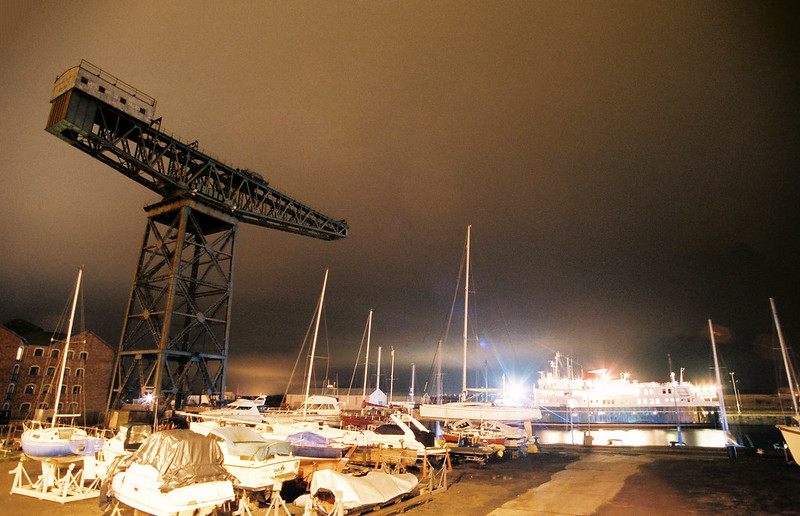 Finally, we came to the Stobcross/Finnieston crane. Its TV appearances with dopey protesters and trials riders has tightened the old girl up, sitting right in town next to a hotel doesn’t help. After rolling around in a jungle run challenge at the base we were sat at the top of the stairs but not atop of the jib due to some nicely fitted steel, loosing interest we grabbed a few photos and disappeared!


Surprisingly the Stobcross wasn’t built by the engineering dons Sir William Arrol & Co, someone at the office must have been having a bad day. Operating from 1932 the crane was instead built by Cowans, Sheldons & Company of Carlisle and Cleveland & Bridge Engineering Company. 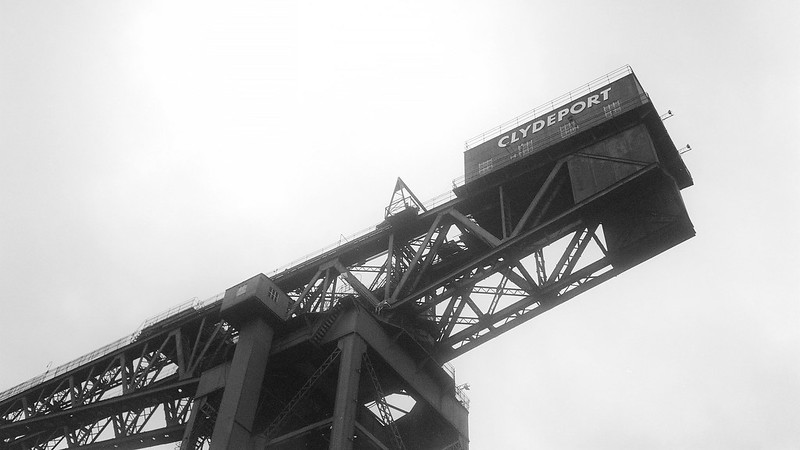 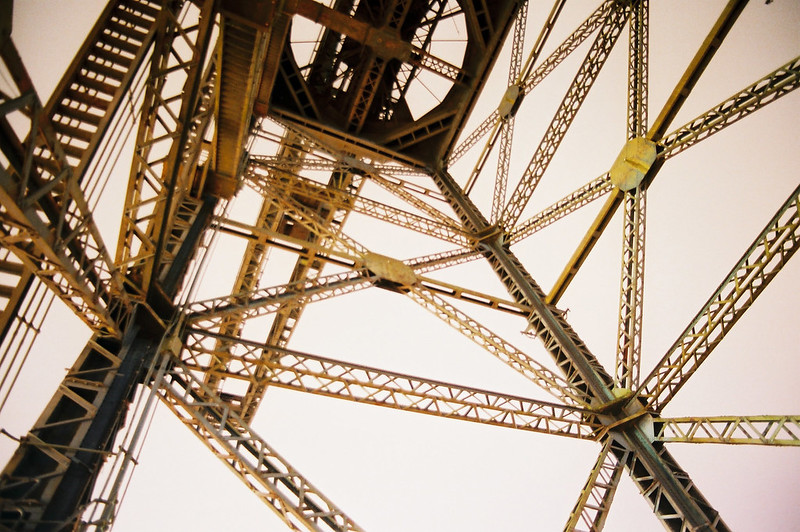 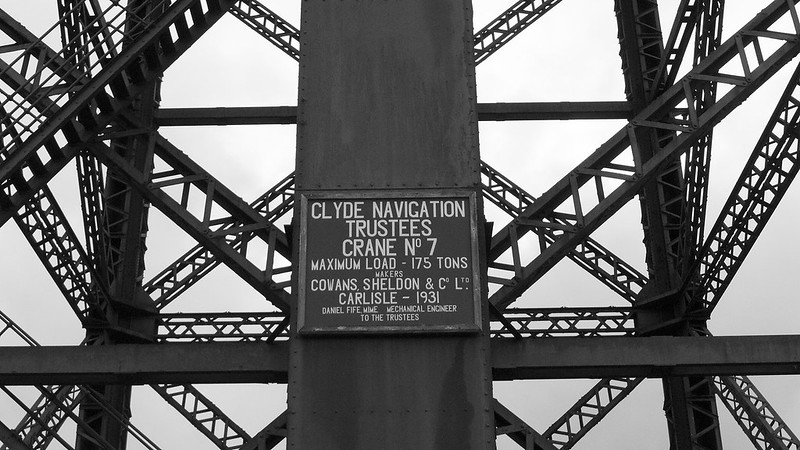 Sorted. The Fairfield Titan was another giant canti crane at BAE systems, even though category A listed it ‘hindered development of the yard’ and within a three week period was dismantled back in 2007. Catch ‘em while you can.


All shot on 400 film and the CNT sign on digi. Massive shouts to Nick, he’s been on it for time and knows the score <3

28DL Full Member
Fantastic that's what you call a night out.
ㄥ丹∨工れ◯

Regular User
It's known as a "cranathon" when you tackle them in one night.

I Go Where The Drains Are

Regular User
Had the same issue with Stobcross, around the same time. Gave up after drunk chix started flashing tiddays at me.

In Search of Lost Time

Regular User
Excellent report and some amazing photos!
Thanks for sharing!
<3 mraukot
my blog ​

28DL Full Member
Brilliant work. Loving that chameleon crane especially!
"Ok I have a plan. My plan is to make it up as I go."