Regular User
Another industrial archeological wander with the dog on a very sunny afternoon, shortly after revisiting the New Sedgwick Gunpowder works.

Background. There were three gunpowder works on the River Kent, all close together: New Sedgwick, Old Sedgwick (of which little now remains) and Basingill.
Basingill was unusual in that it was not a complete works but was built (1790) to supplement the incorporating mills at Old Sedgwick (incorporating mills were where the gunpowder ingredients were ground together).
When Old Sedgwick closed in 1850 Basingill continued to supply another factory at Gatebeck a few miles away.
After all the gunpowder works shut in 1935 the wooden-framed mill buildings were burned to remove traces of gunpowder, leaving just the stone lower storeys, blast walls and the water supply system.

There are three blocks of mills, A-C on the map below, each of which had a water wheel.
Water was channeled to B and C by a tunnel from A. The site is in a quarry full of trees and scrub although part of it was once (1820) a formal garden for Sedgwick House.
The land belongs to the Environmental Agency, who maintain a fish monitoring station here. 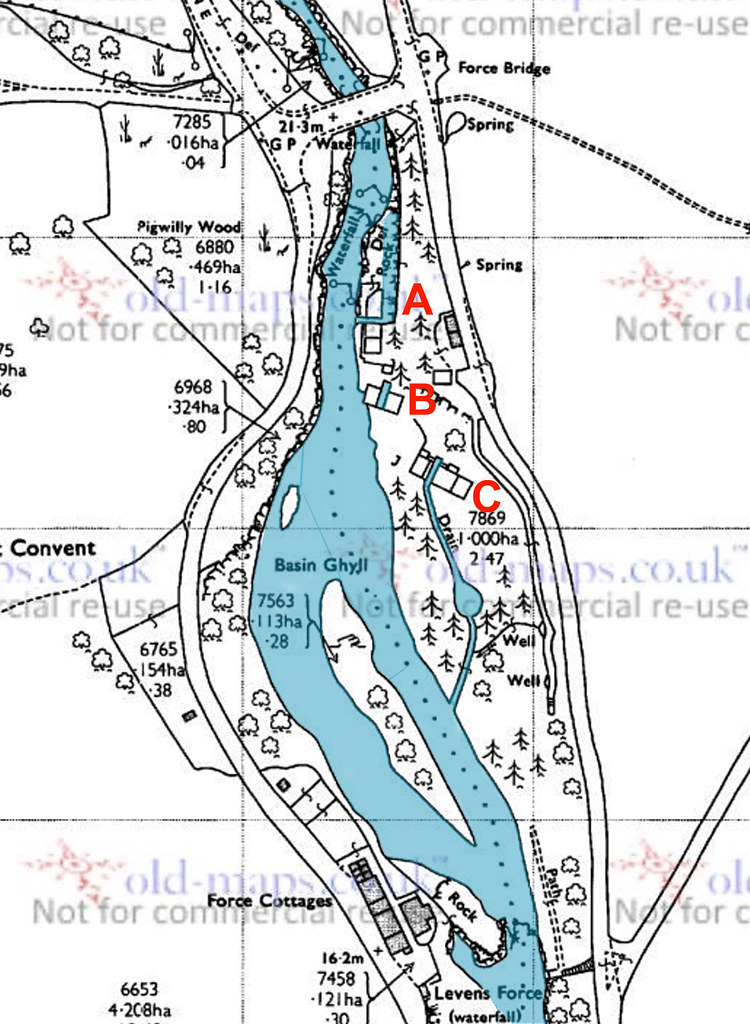 Looking downriver towards A, there used to be weir at about this spot to channel water to the left of the rocky platform. 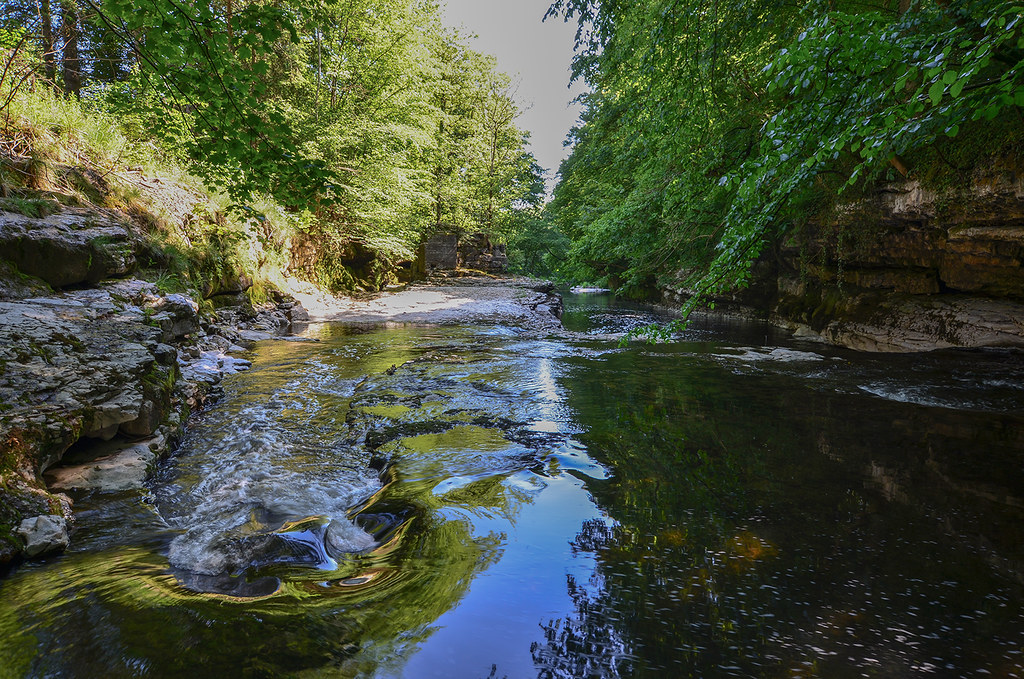 Getting closer, some of the water went down the tunnel in front, now blocked…. 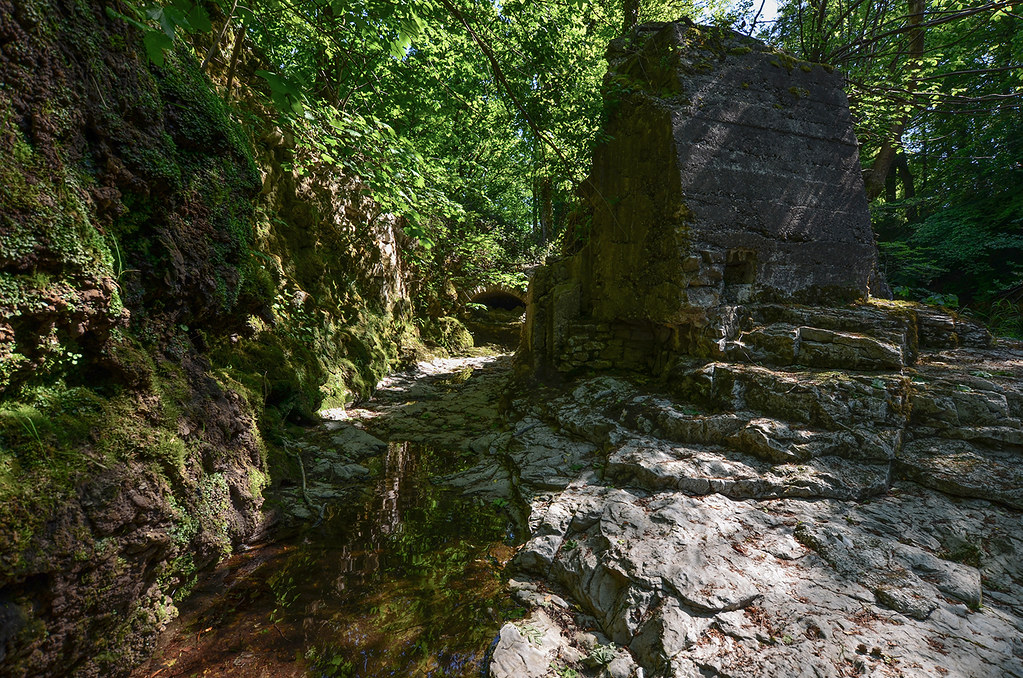 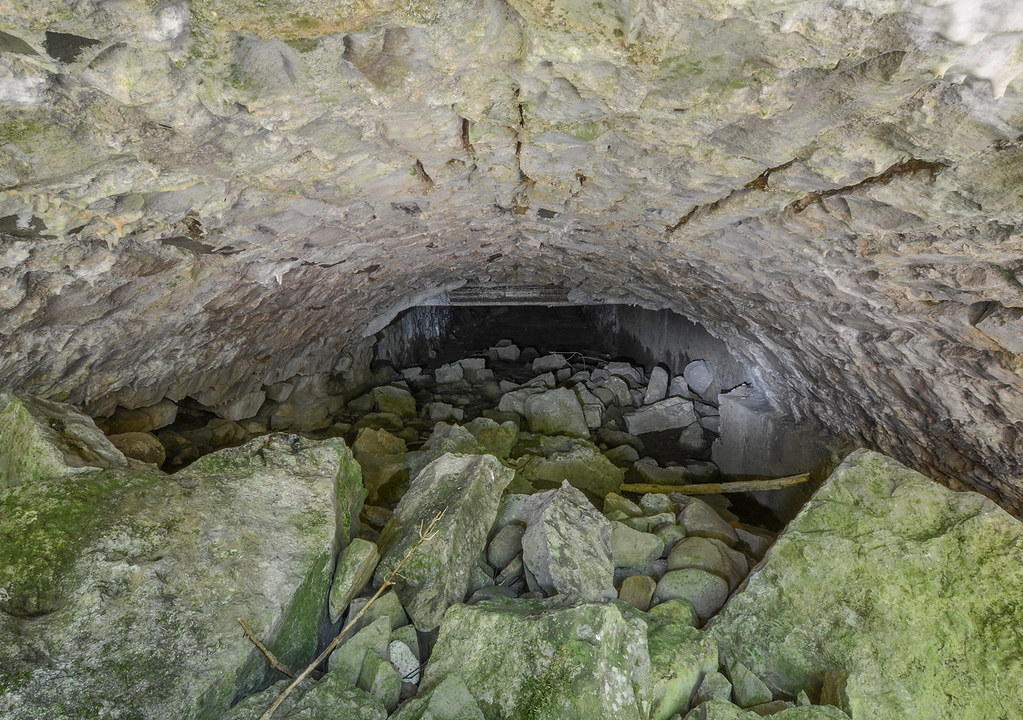 …the rest made a right turn between two outcrops.
I initially thought there must have been a ginormous wheel here, but an English Heritage reconstruction shows that a couple of walls on either side of the channel are missing.
The large stone bases on either side were for mounting mill machinery, not the wheel axle. 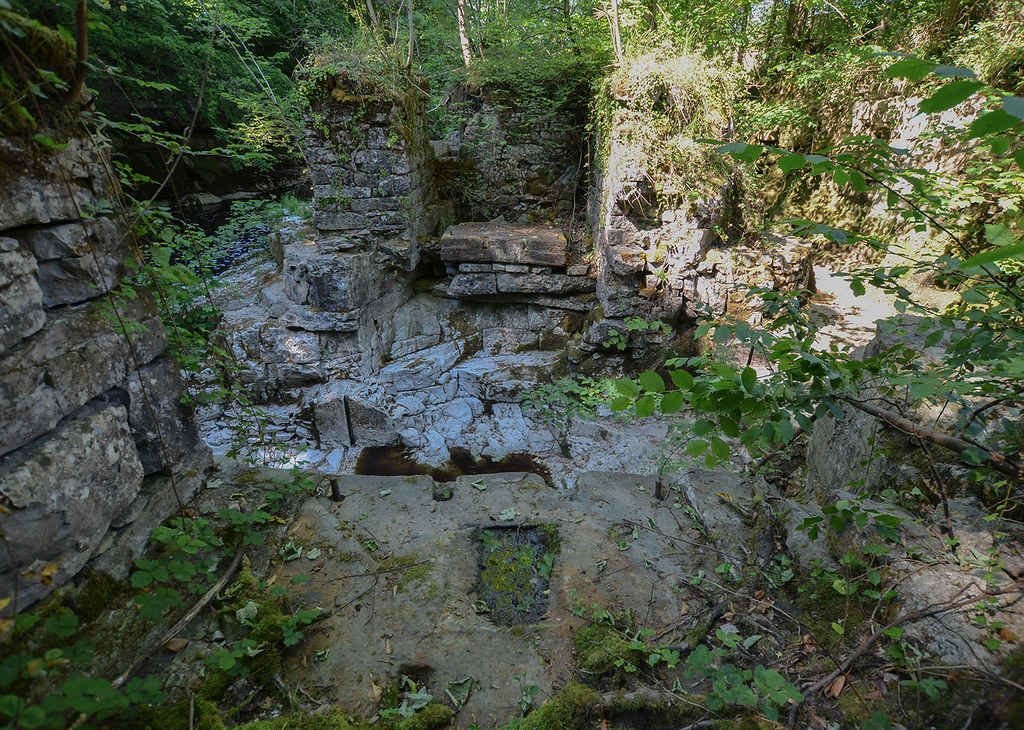 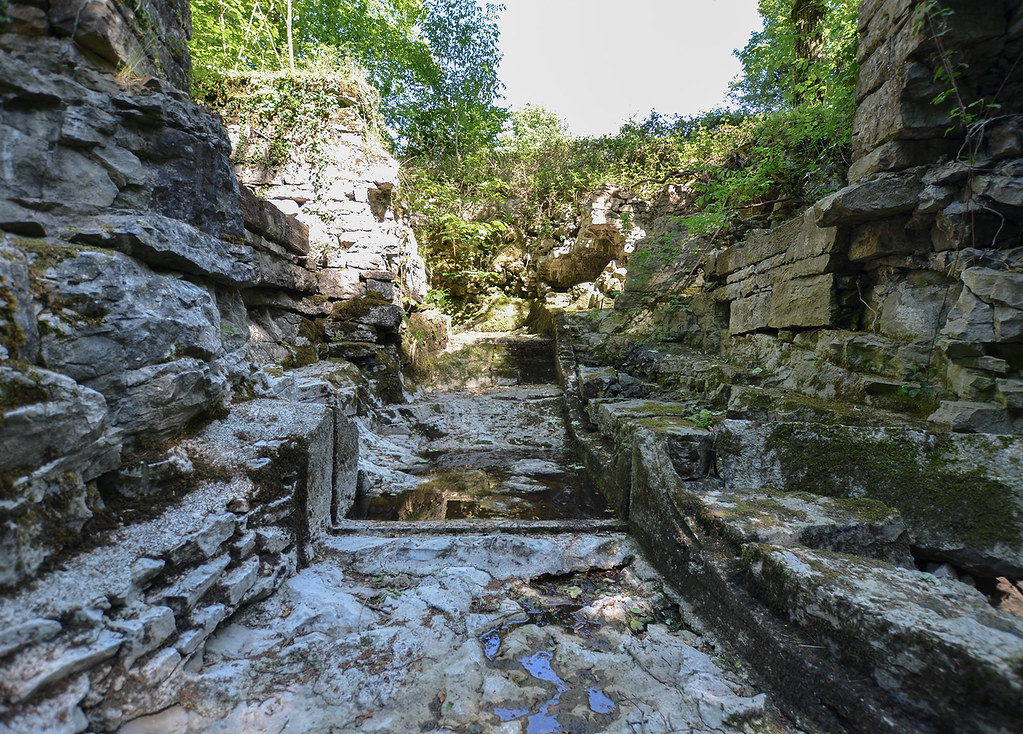 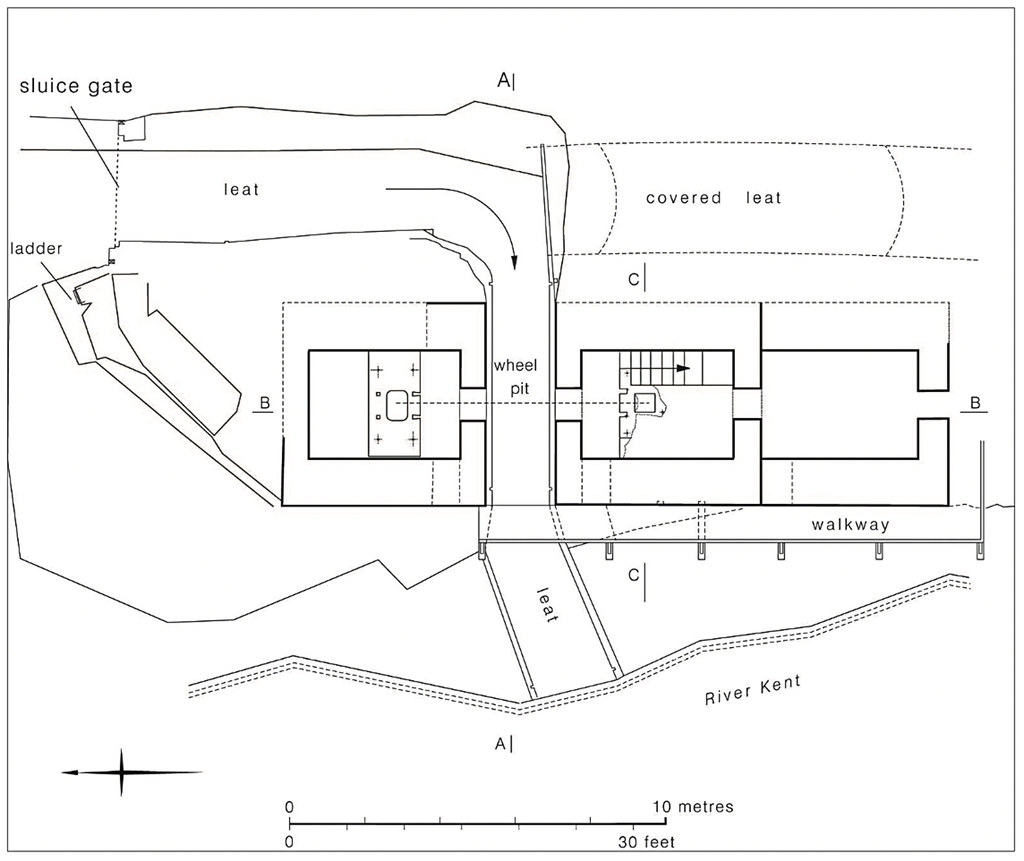 Moving on to B, the wheel pit in the middle is partly filled in but has a curved profile at the back to fit the wheel, with openings either side for the axle.
The water tunnel at the back is blocked off after a couple of meters. 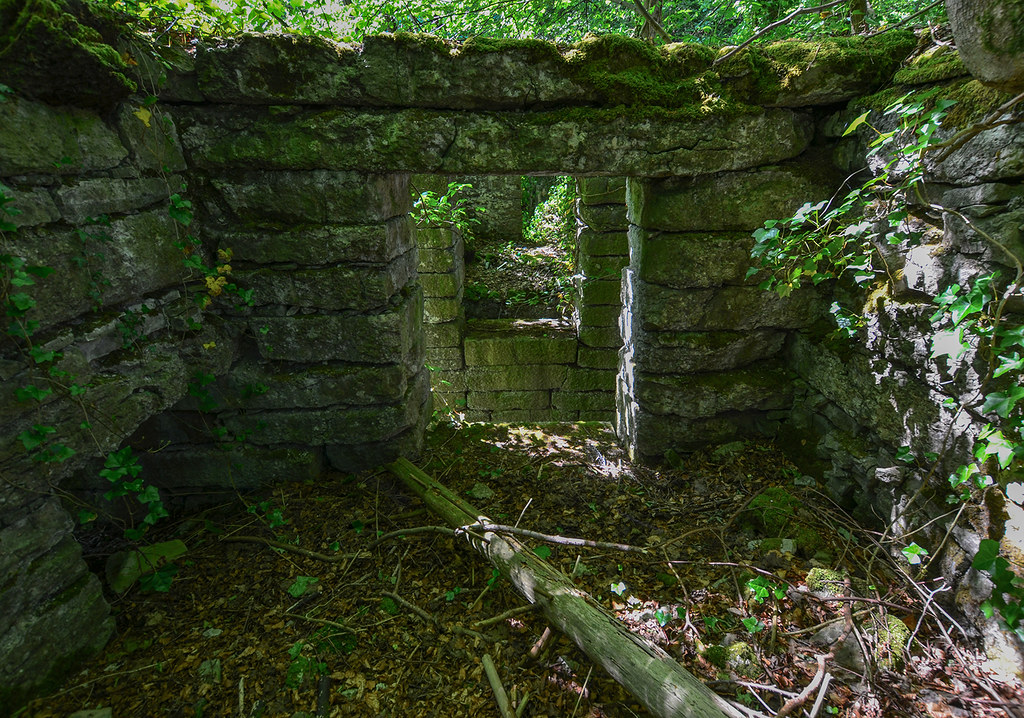 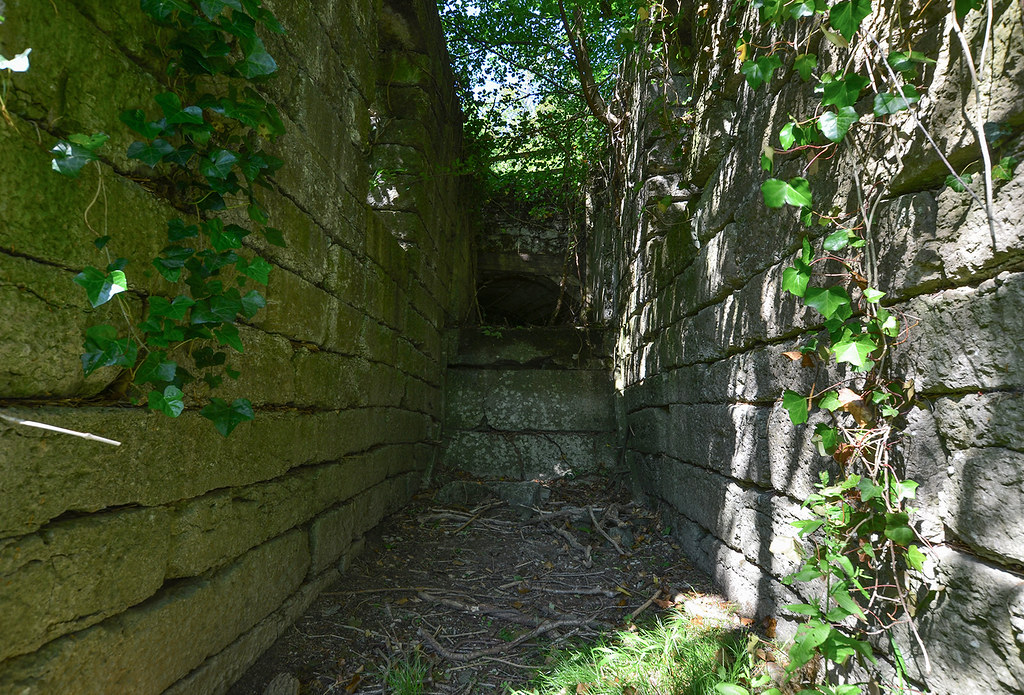 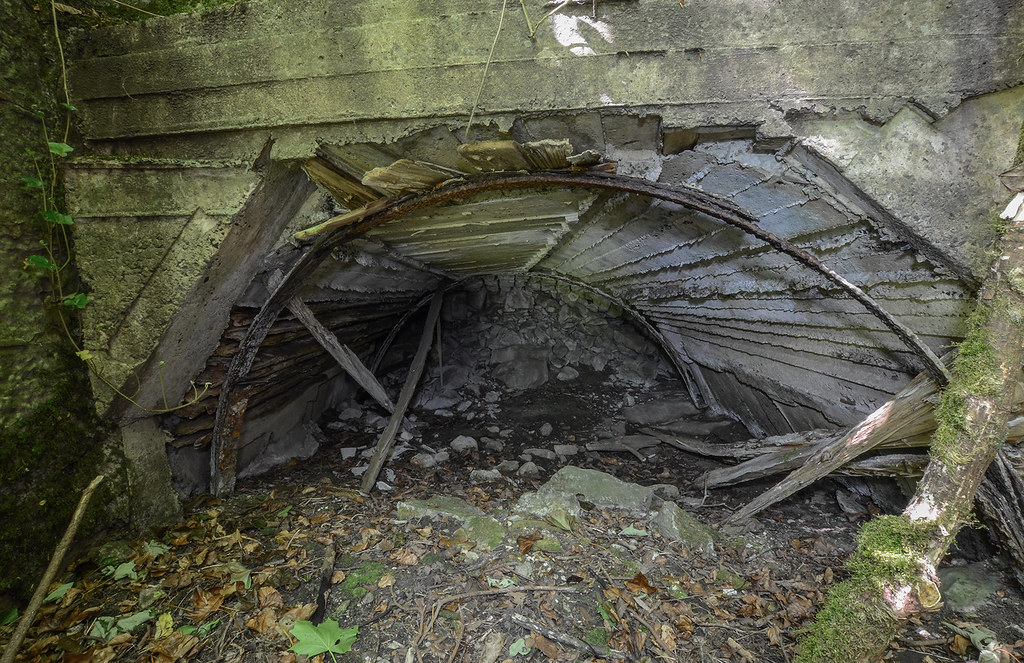 Block C is the largest, and like B has axle openings and a profiled wheel pit. 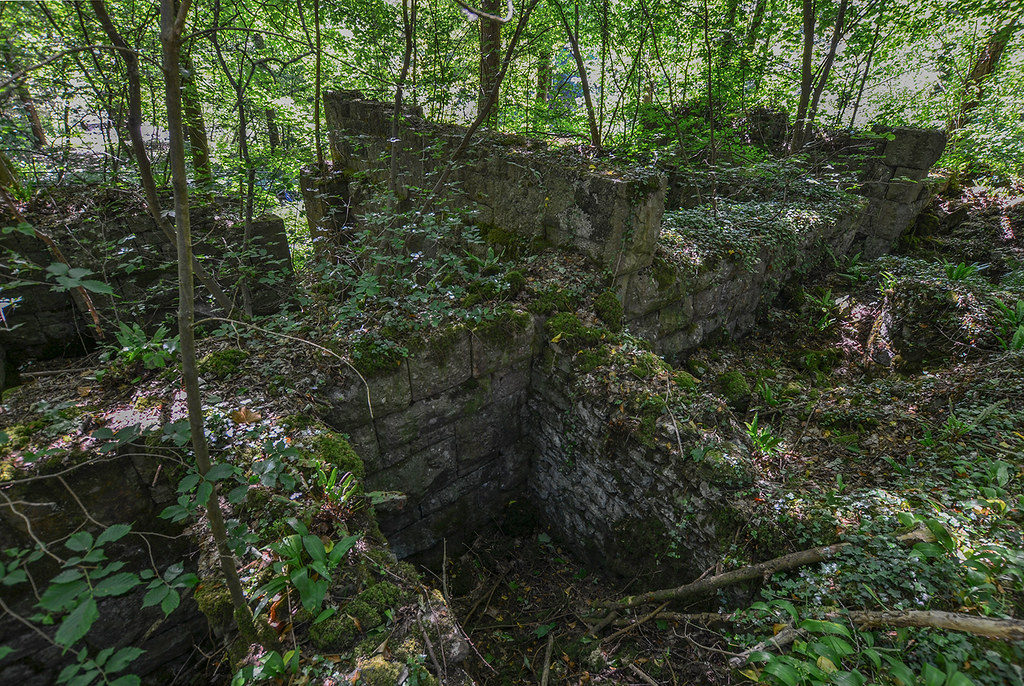 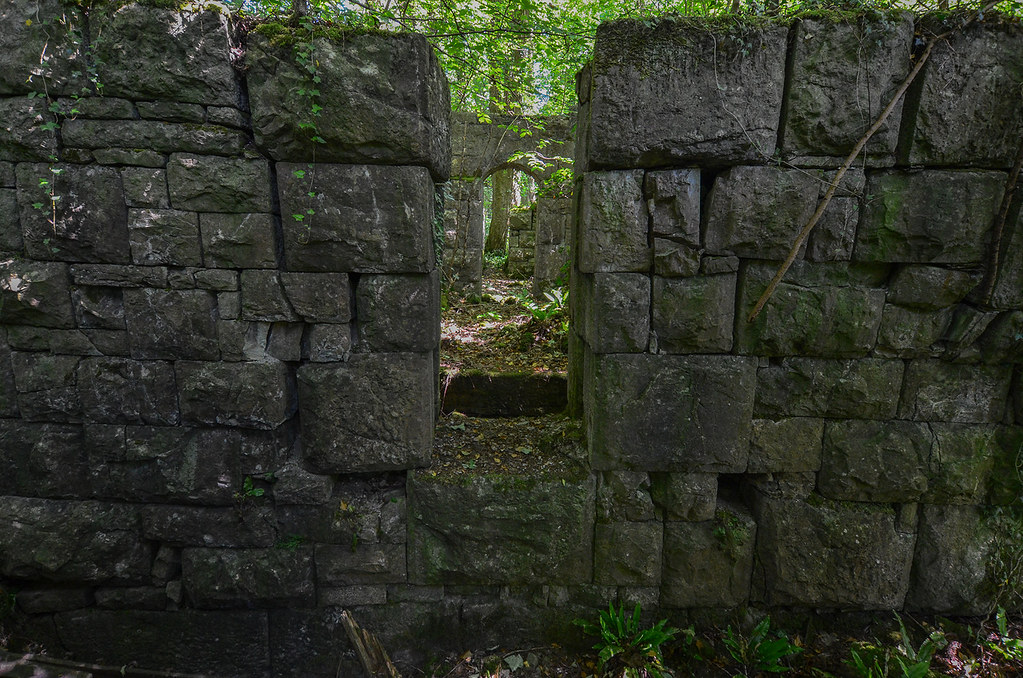 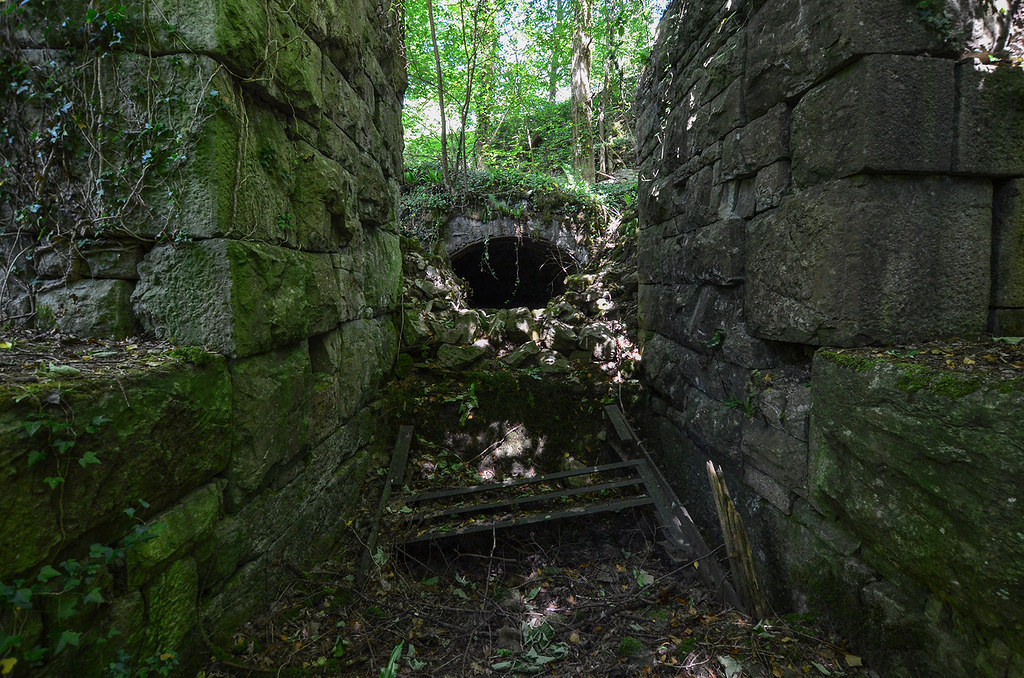 The most interesting feature here was the slatted object on the ground, part of a Rennie’s Hatch.
This was a type of overflow sluice used to increase the efficiency of breast-shot water wheels.
The iron slats - some of which are missing - were mounted vertically in front of the sluice to direct the water flow. 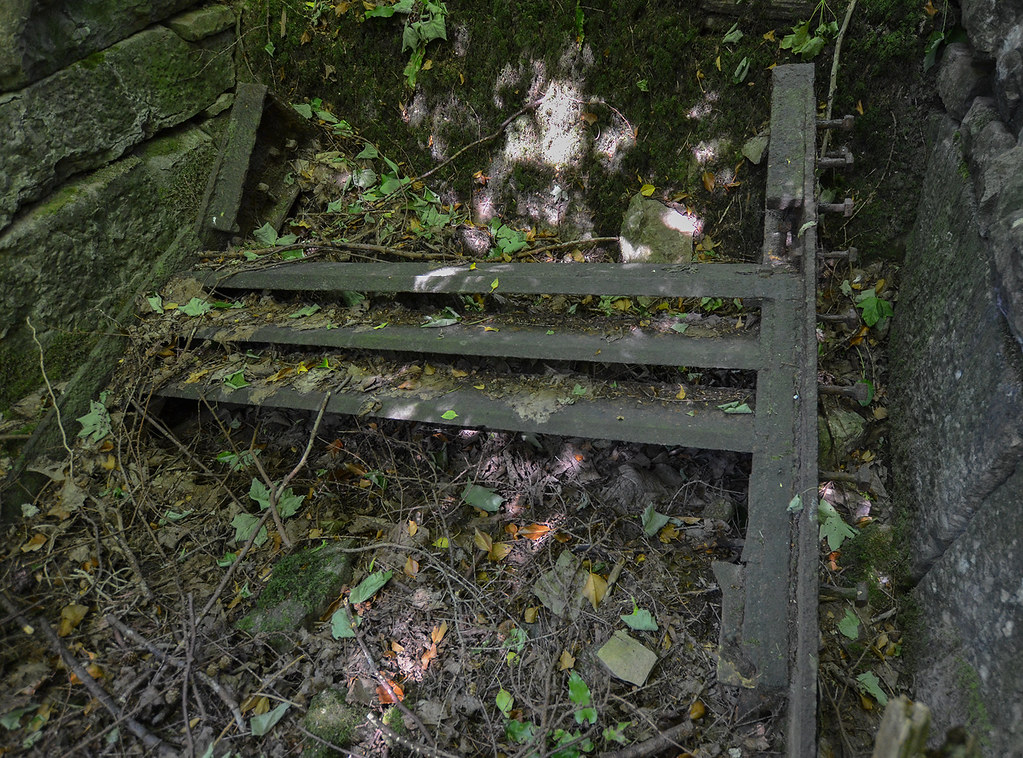 An illustration showing a Rennie’s Hatch with two movable sluice boards - these were sometimes used in large textile mills with a feedback mechanism (governor) connected to the sluice to produce a steady power output. 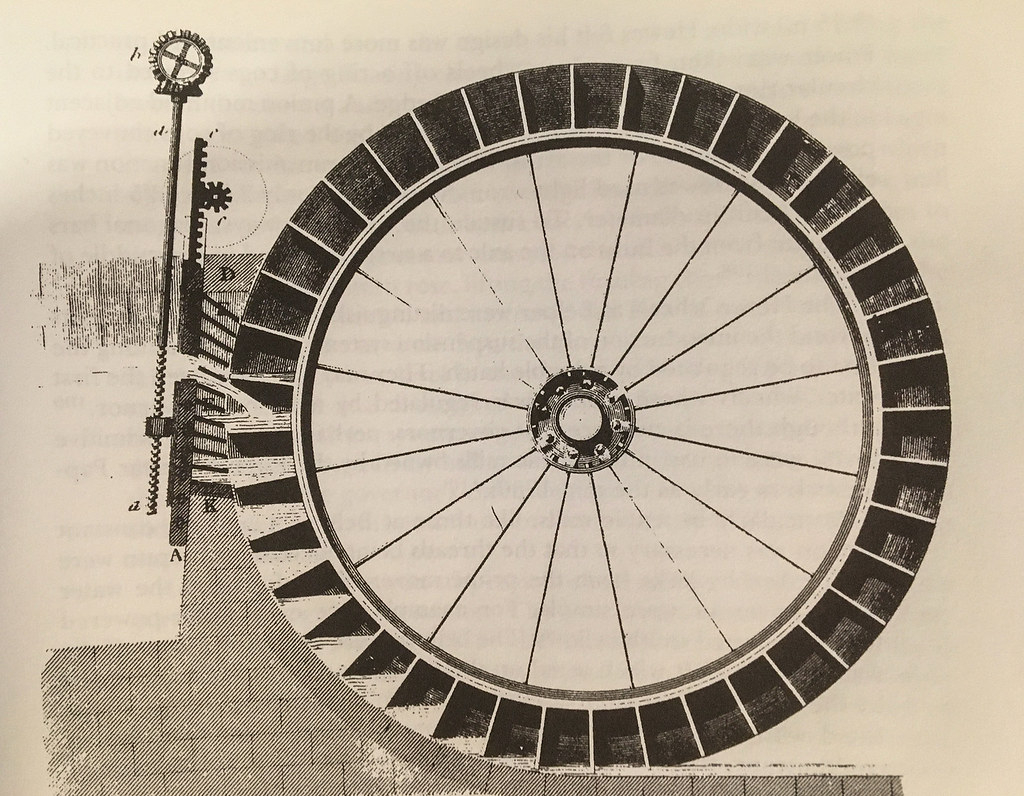 The tunnel at the rear leads round to the blockage at B - concrete was apparently poured in when part of the tunnel collapsed during heavy flooding. 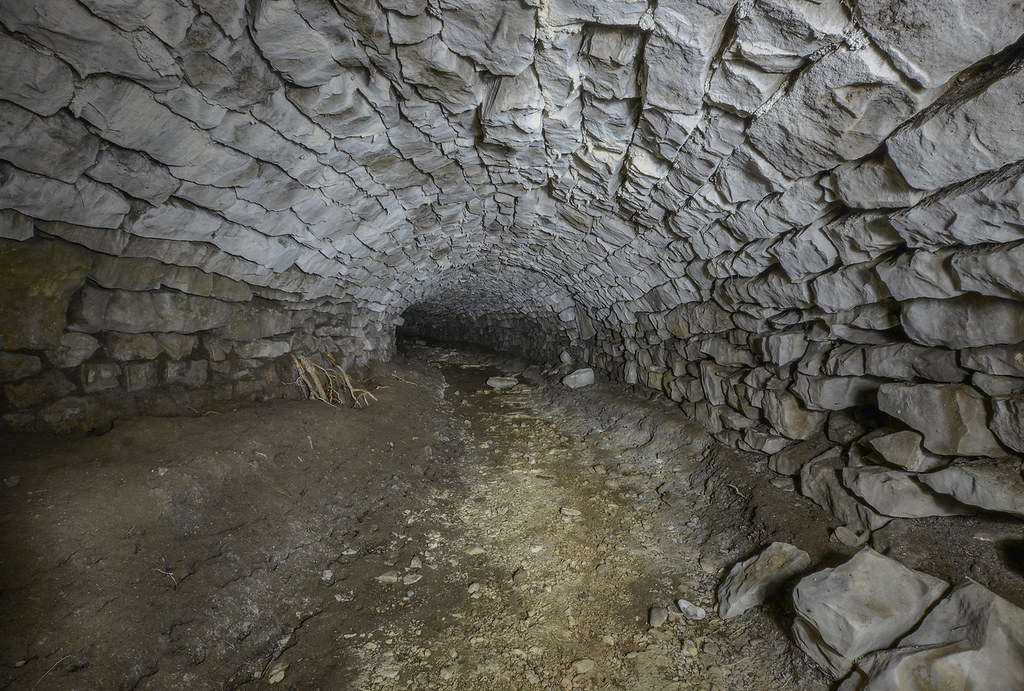 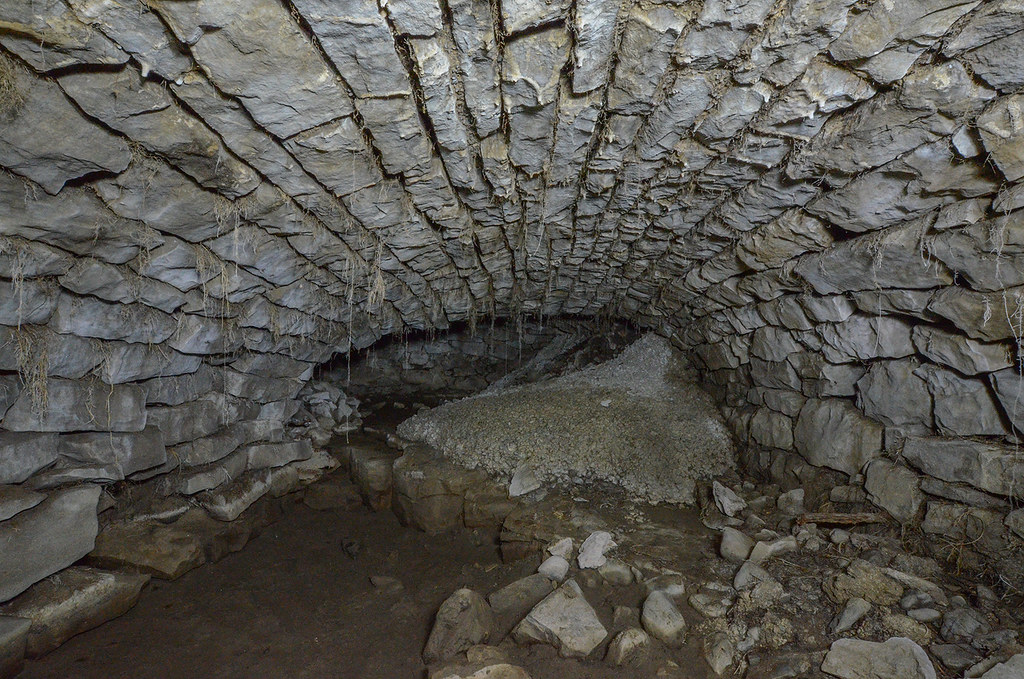 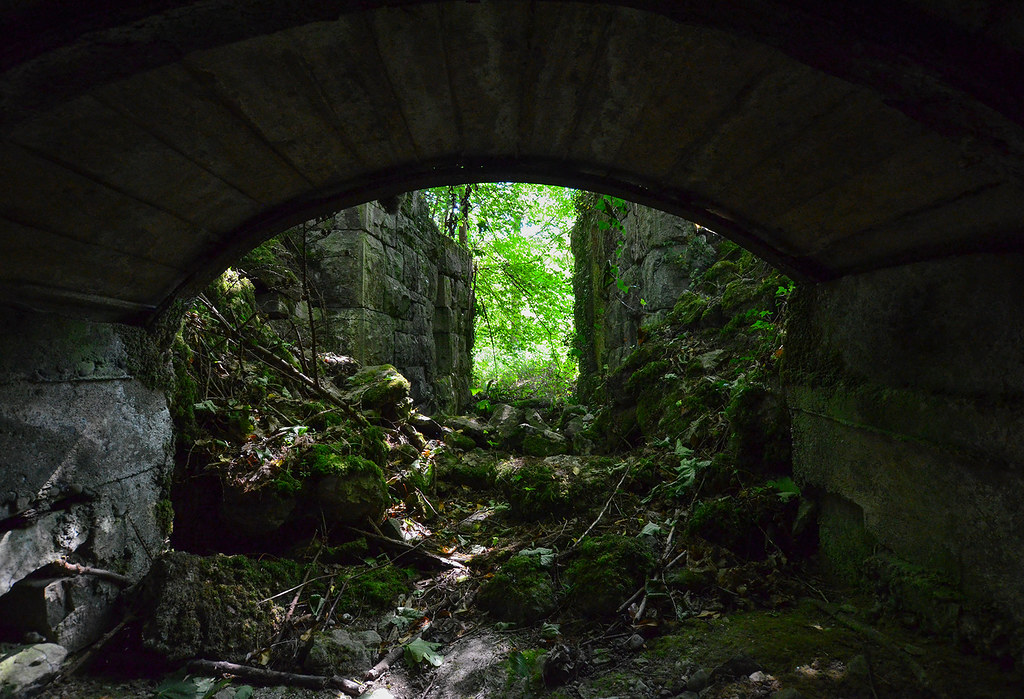 A final view upriver towards Force Bridge - the water level was low when I visited, although there was apparently always enough for the three wheels.
In winter this gorge can be a bit of a torrent, popular with whitewater kayakers. 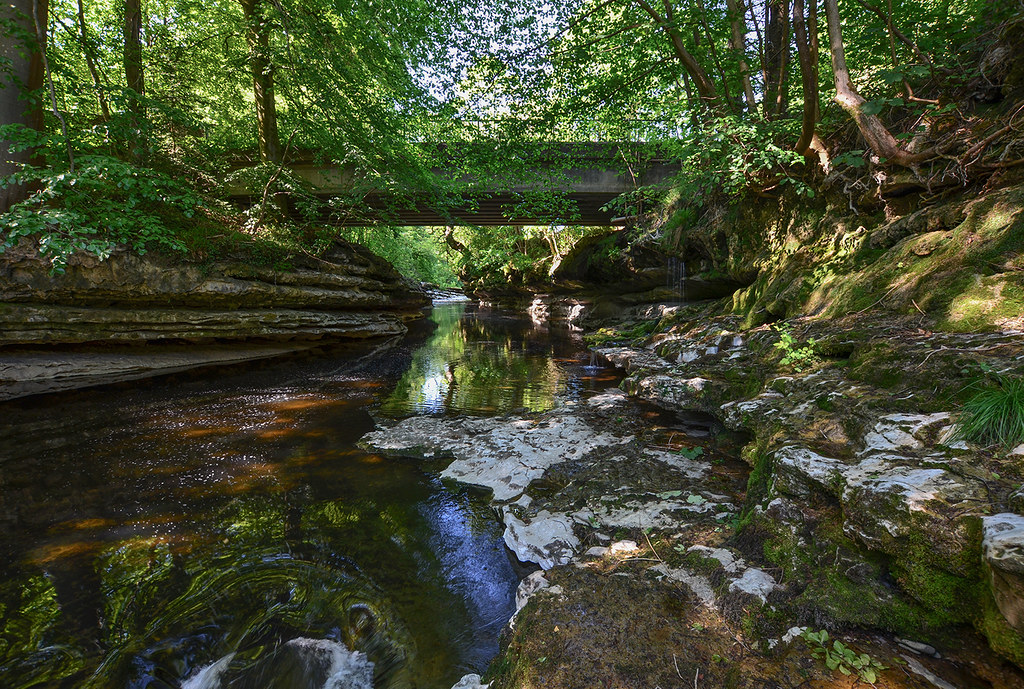