Regular User
Travelling through Worksop one evening I remembered seeing a post about this pretty building - actually there are two posts but one had no internals so doesn’t count.

There were a couple of hours of daylight left so I climbed in to have a look for myself.

History: The pumping station was built in 1881 following a cholera epidemic and was capable of pumping 400,000 gallons every 12 hours.
It was powered by a pair of coal-fired beam engines, with the coal arriving by barge along the Chesterfield canal.
The steam engines were replaced with electric pumps after the war, and the plant eventually shut with the building of a new sewage treatment works at Kilton.
All that remains is the empty pumping house, the boiler house chimney and a couple of treatment tanks.
The boiler house itself was demolished sometime after 1970 according to old maps, and the pump house got a new roof in 2003.
In February 2006 planning permission was granted to convert it into 24 residential apartments, but nothing has yet happened. 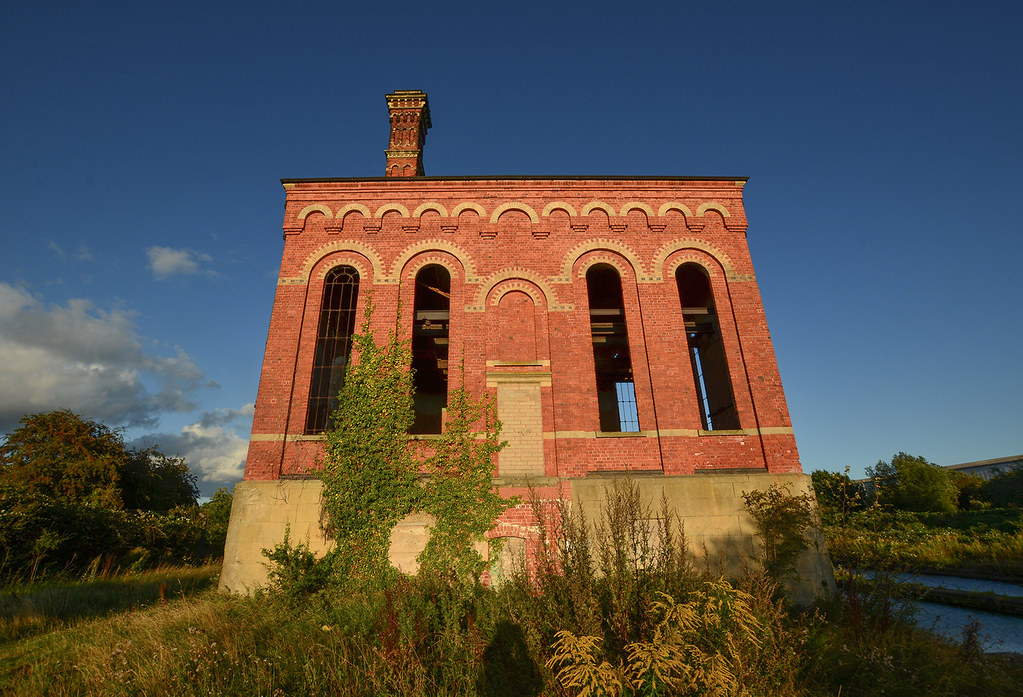 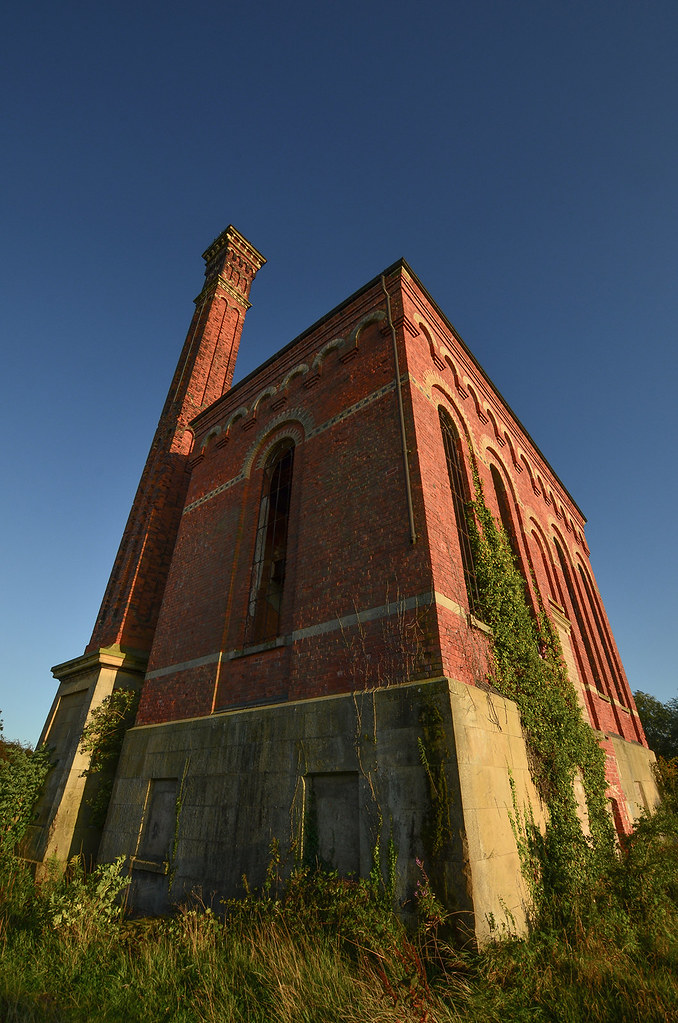 Rear view showing where the boiler house was attached. 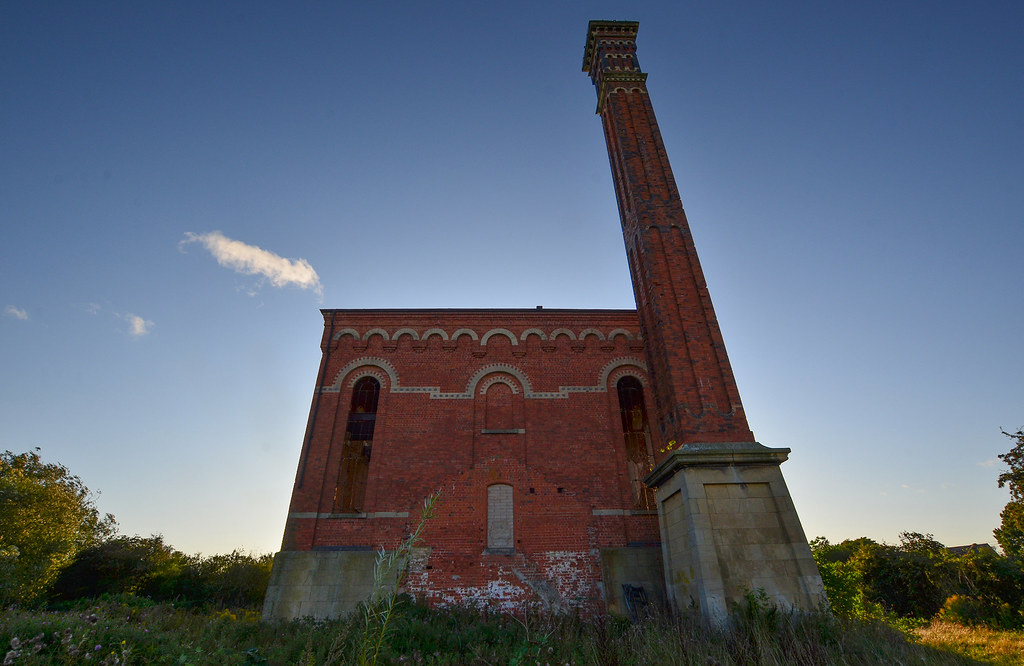 Some pictures of the little partly flooded rooms ground floor. The dome-capped cylinder is presumably some sort of air ballast. 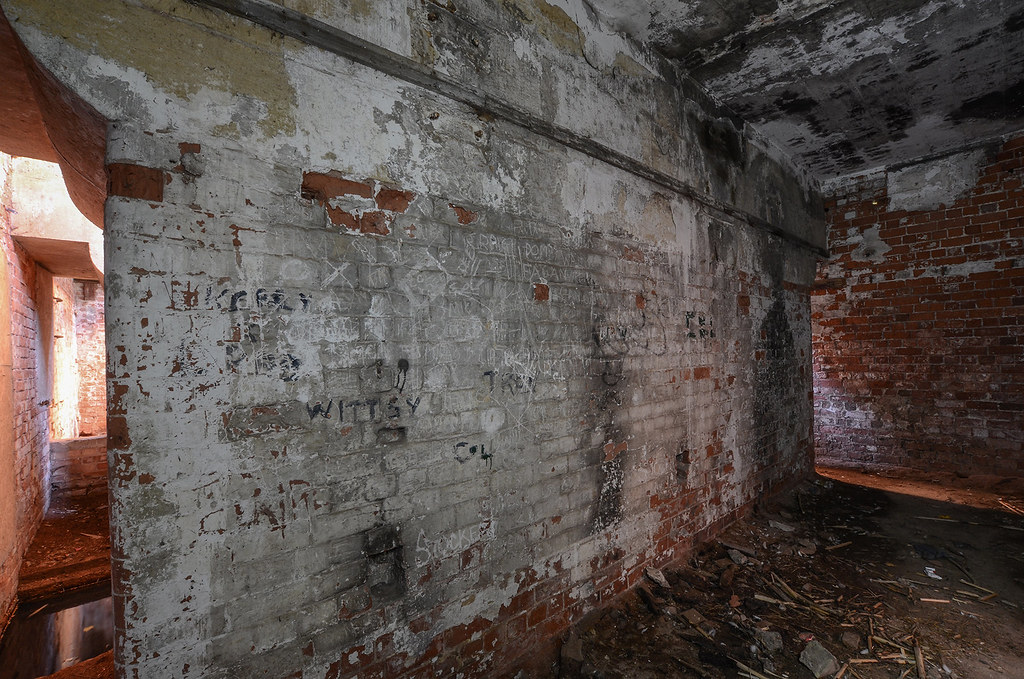 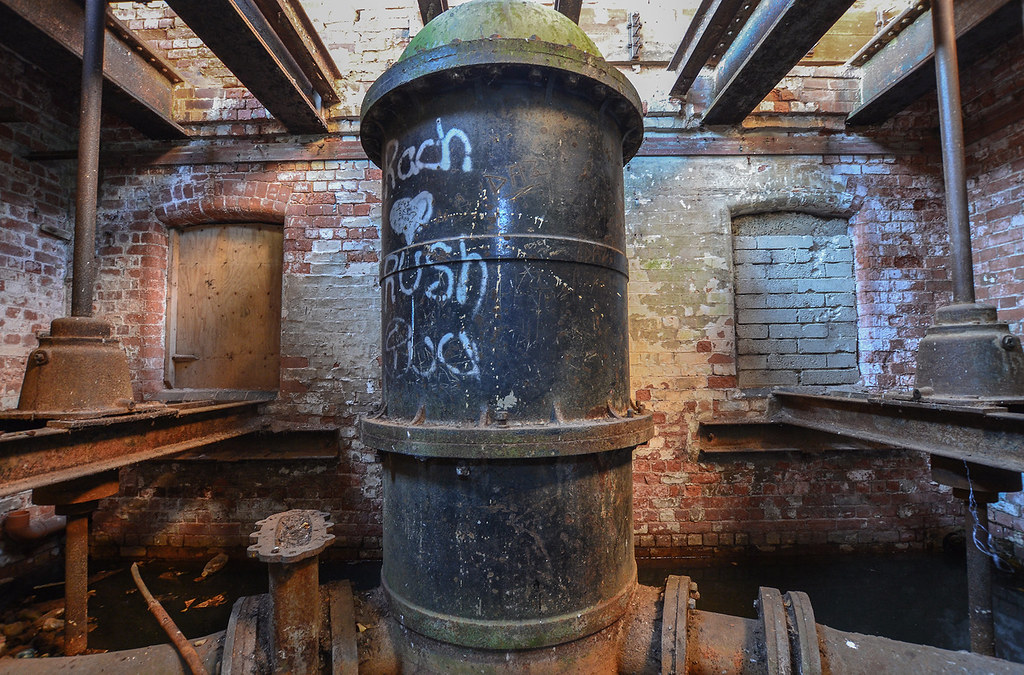 A bit of one of the electric motors lodged behind the axle bearing. 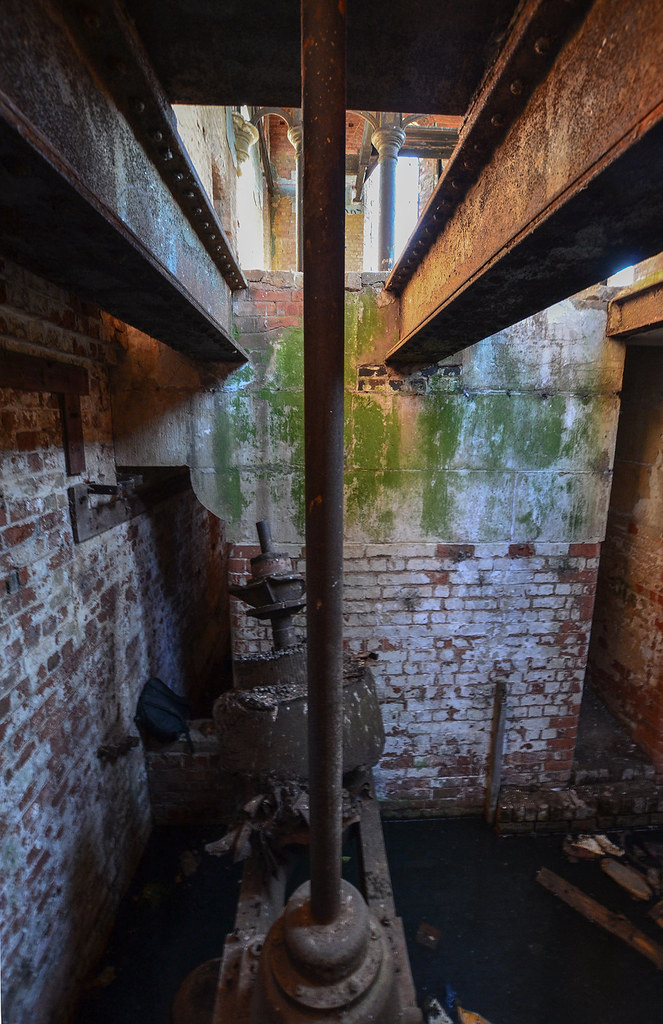 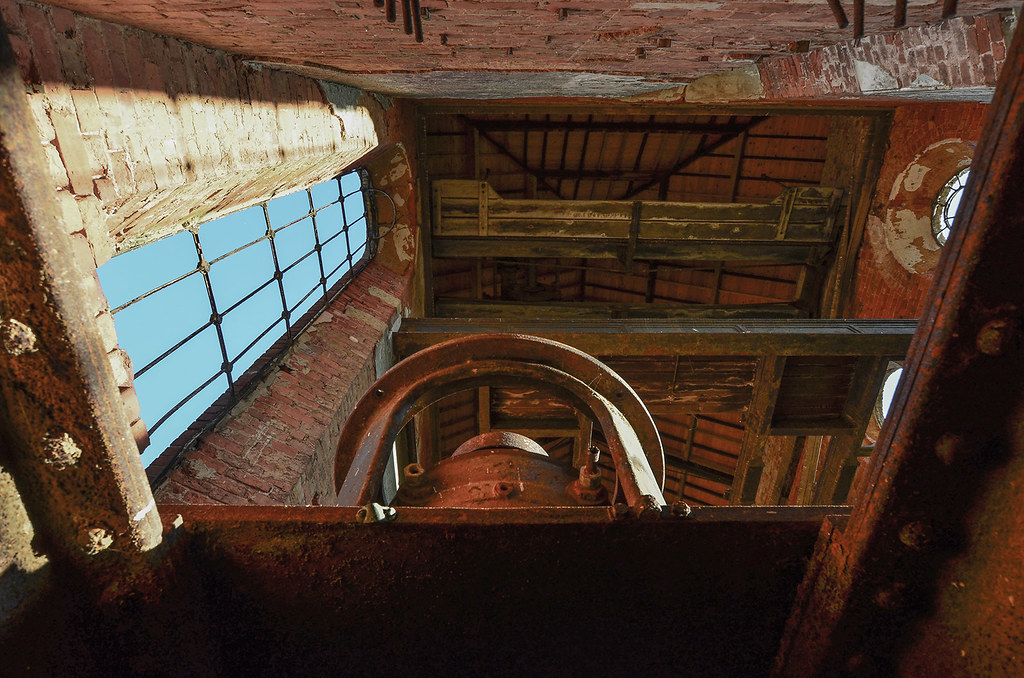 The beam engines were on the first floor. 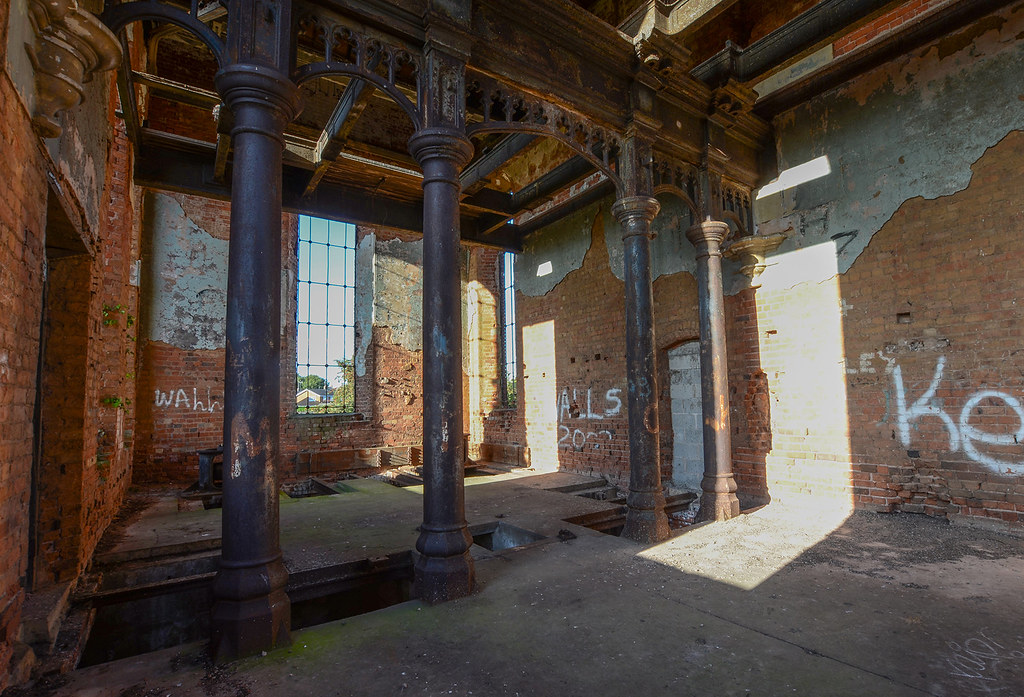 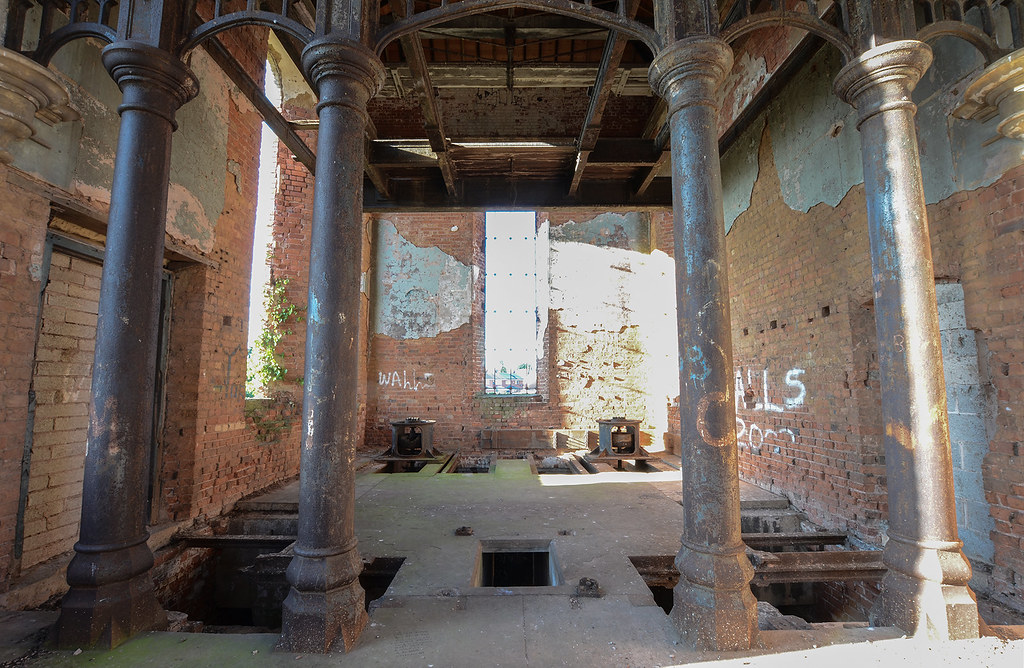 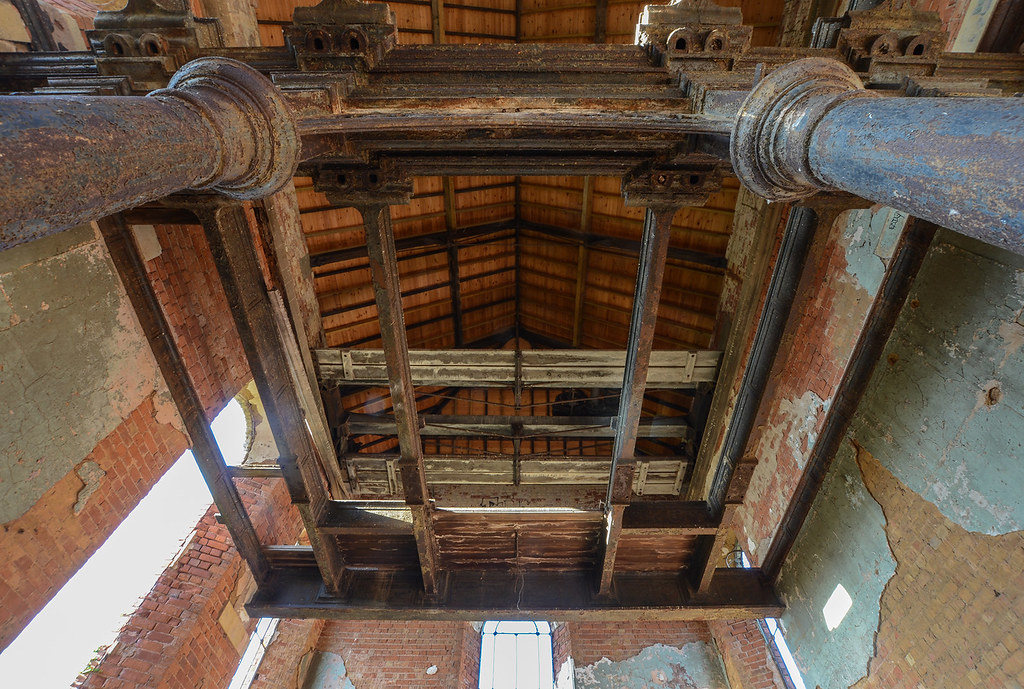 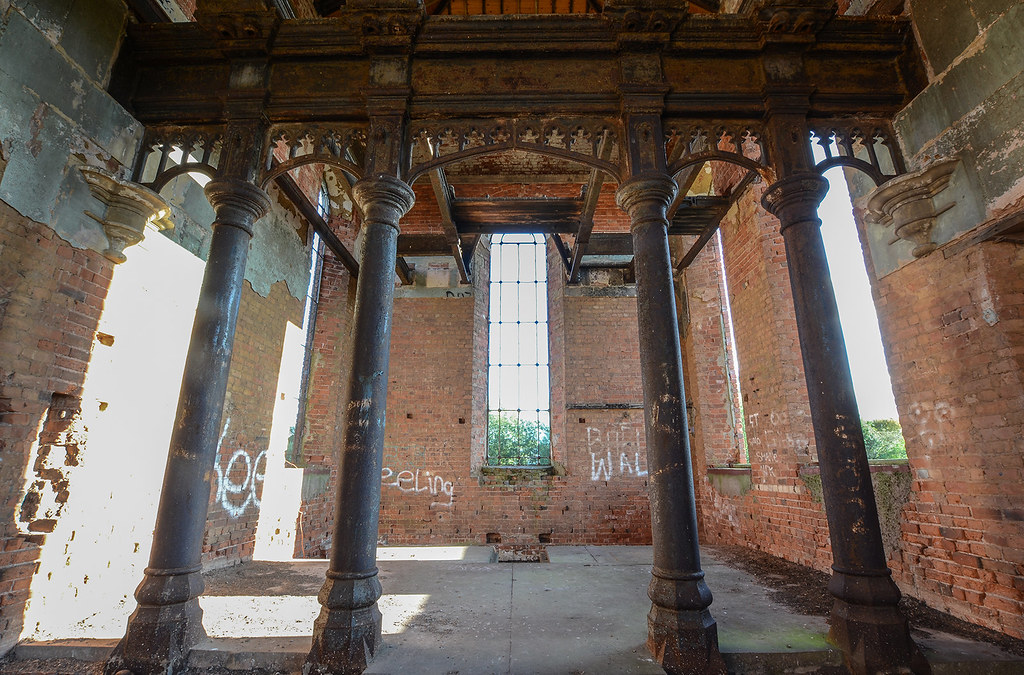 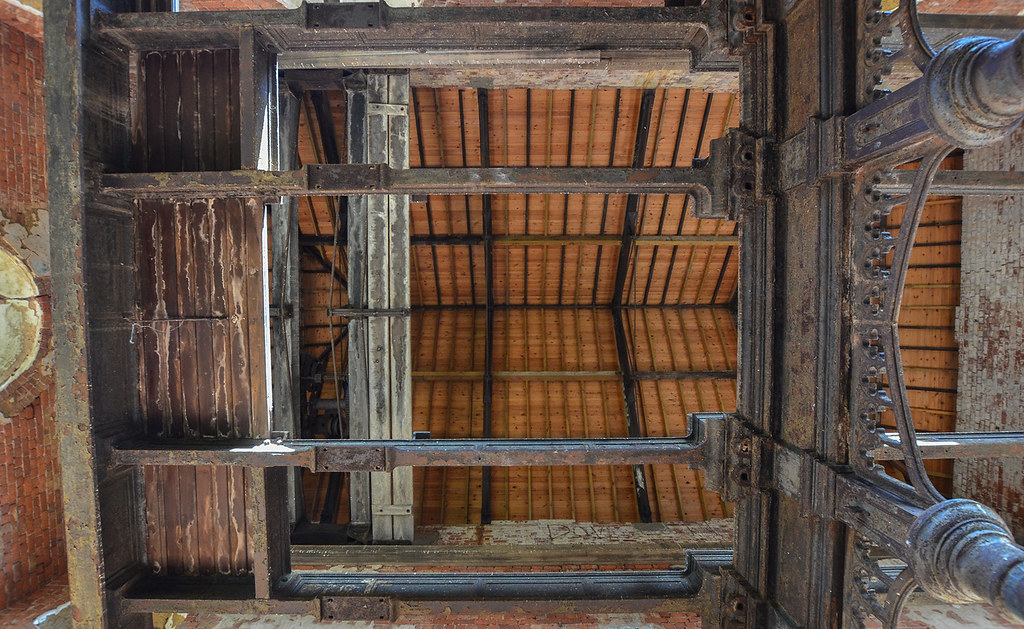 At this point several local youth climbed in, probably 15 or 16 years old. This is apparently their regular den but they didn’t seem too put out by my presence.
In fact, seeing that I was interested in the travelling crane up near the roof one of them kindly volunteered to climb up and take some pictures for me.
Up goes young Kieran with my camera bag… 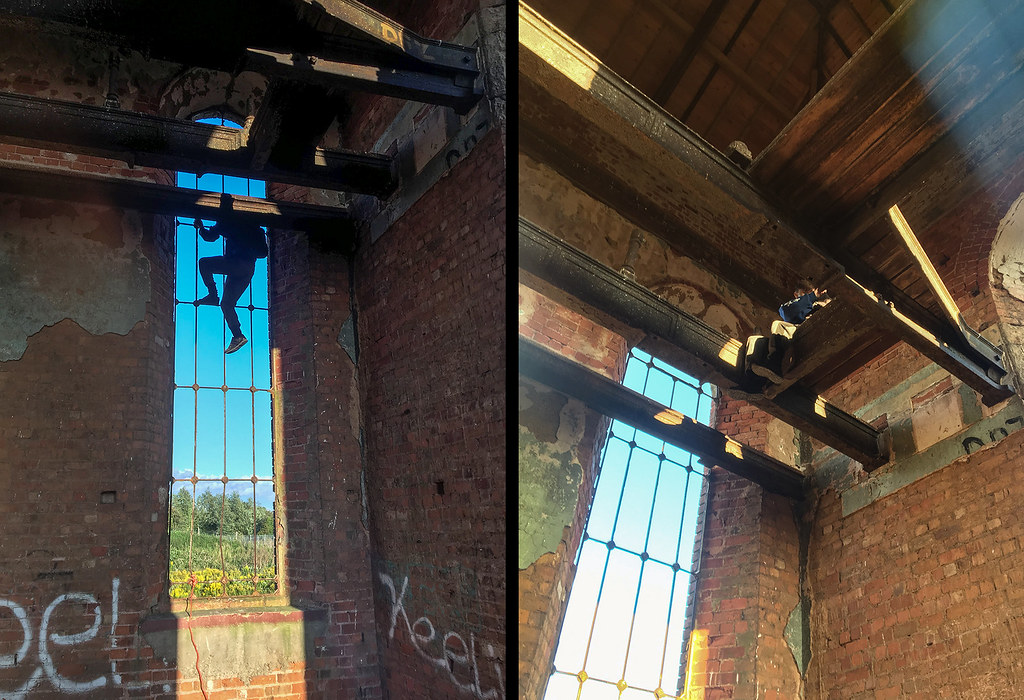 …and he did a pretty good job. Pictures reproduced without permission, but I don’t expect he cares. 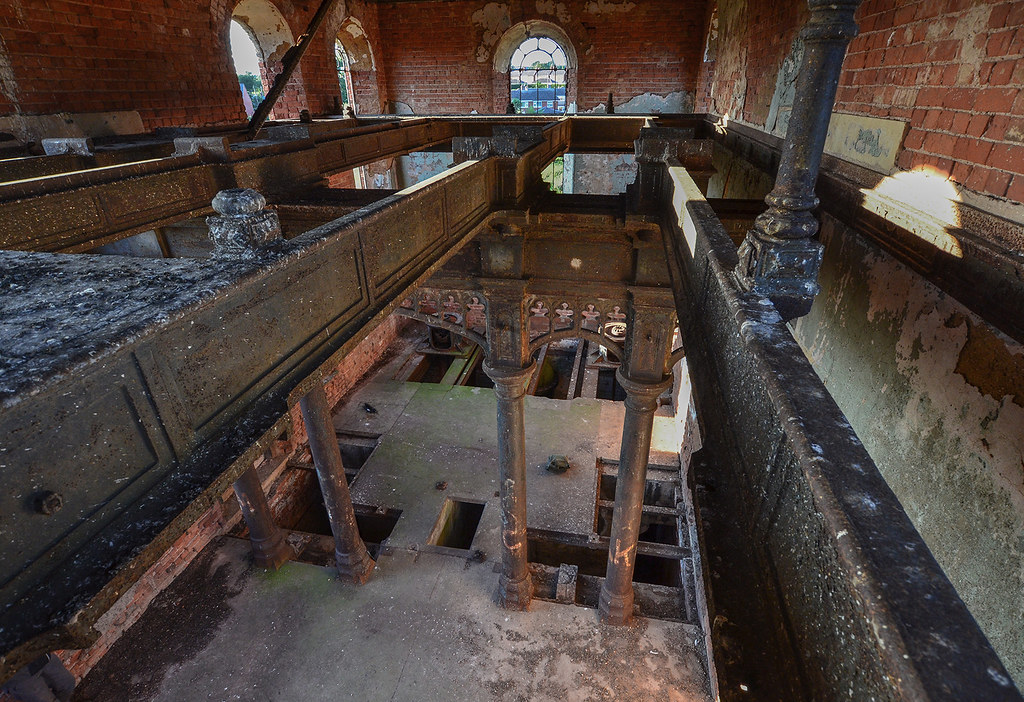 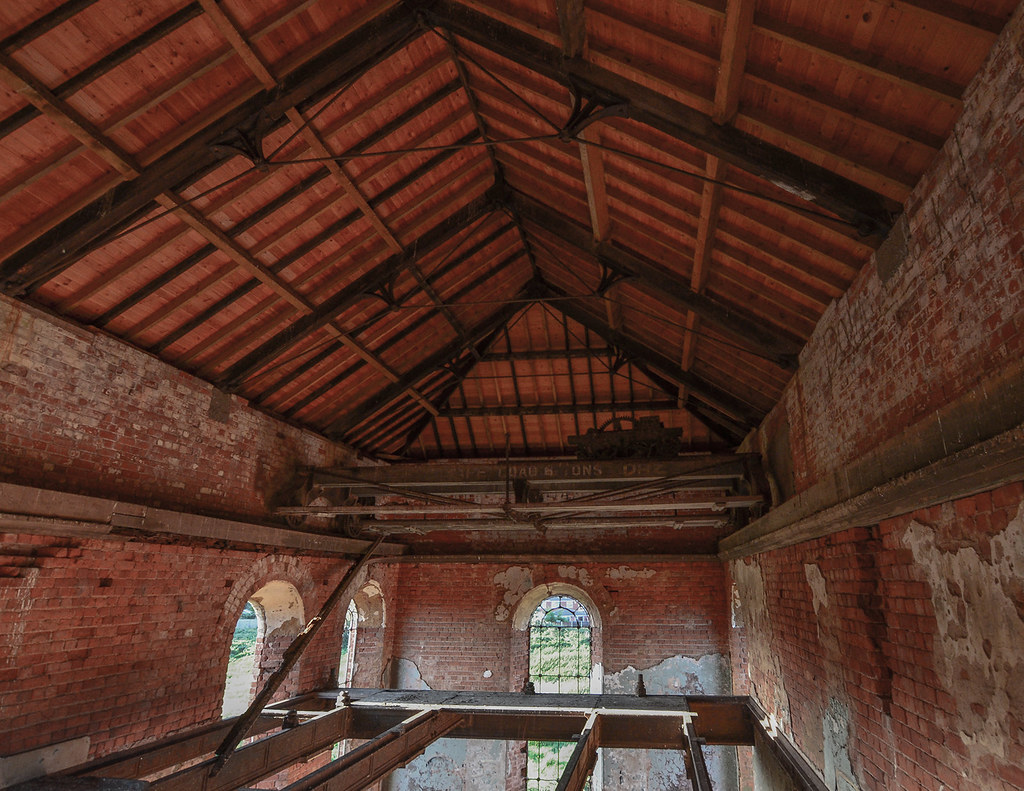 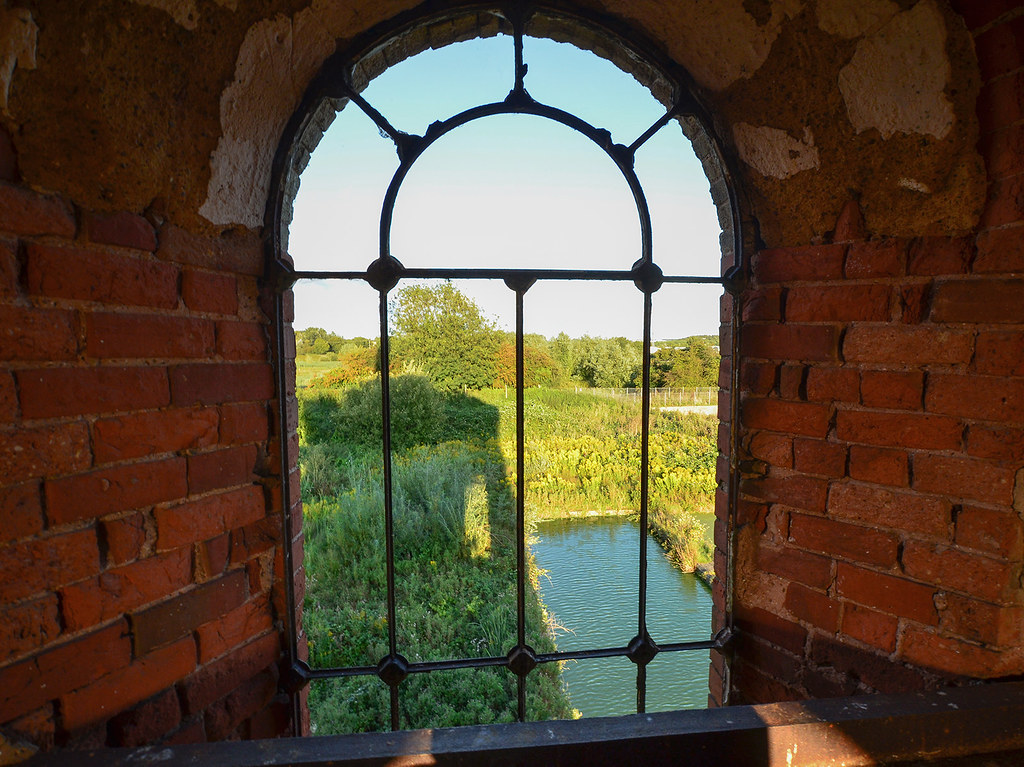 The sun was now starting to set so I left the lads to get up to whatever they really had planned and took a gratuitous up-chimney shot and a couple more externals. 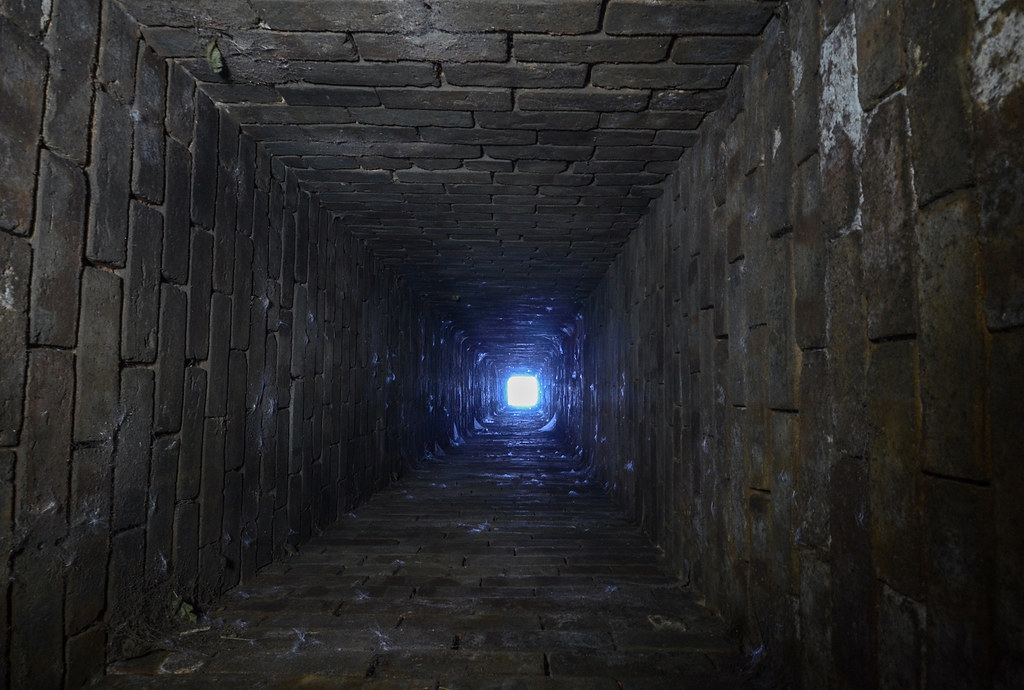 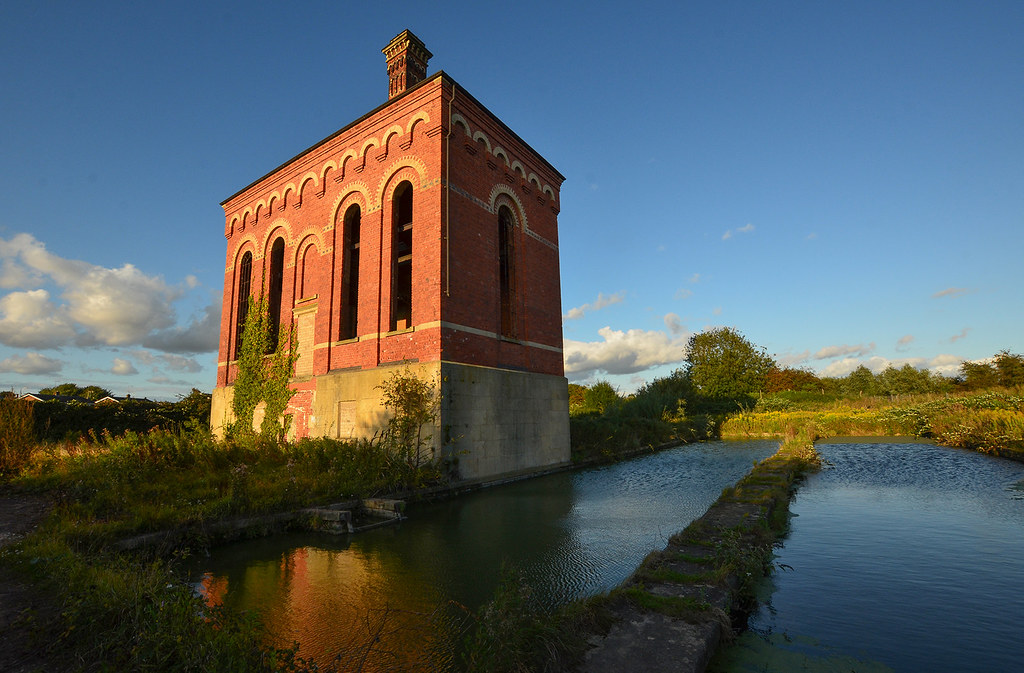 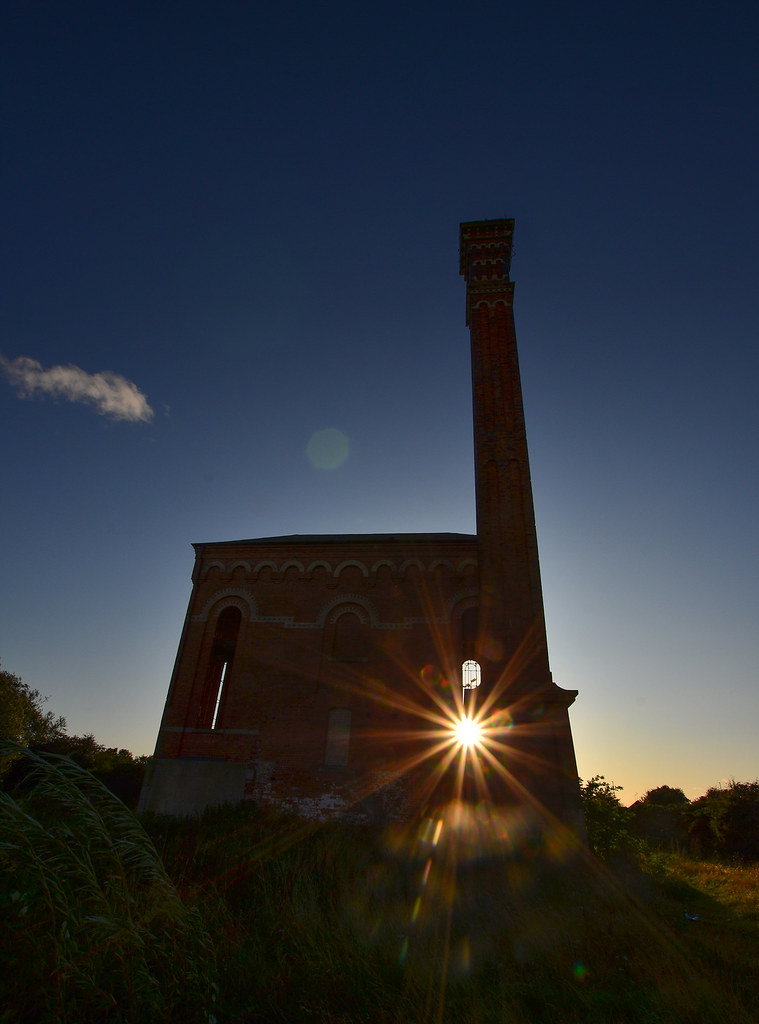 Regular User
Mint. Had to work in worksop once and duely paid this place a visit - cool innit. Didn't climb up the window though jeez. Kids eh

Regular User
This place is a little jem. Fab set. Must revisit as didn't get in last time.

28DL Full Member
Nice building and some good shots.
And you got your camera(s) back..

Regular User
I love this building, and great to see some nice photos from inside. Love how you had help too! Nice one.
https://analogparalysis1978.com​

Regular User
Another nice report. You wouldn't think it would have all those nice features inside

Regular User
I did a very similar one in Coventry years ago, almost identical to that. However it did have an added bonus of being a dumping ground for the water boards drawing archive! I spent so long looking at the stuff I barely photographed the building!

Cracking little gem this. Love the features. That free climb shot, what a great photo

28DL Full Member
im the lad in the photo
K

Snowhead said:
Nice building and some good shots.
And you got your camera(s) back..
Click to expand...

i wasn't gonna steal his camera