Regular User
Woke up early Sunday morning in a warehouse sort of mood but it was raining, making the local one I had in mind too difficult.
Then I remembered the canal warehouse in Altrincham - I’d done a long range recce of this about six months ago, and it looked like it might be doable without too much of a climb.
It’s been reported on here once before, in 2007 https://www.28dayslater.co.uk/threads/bridgewater-canal-company-warehouse-altrincham-cheshire-31-01-07.8482/, and there didn’t seem to be much inside.
Nevertheless, I still liked the look of the place.
Entrance did indeed prove straightforward even in the dark and rain - climb up, shine in the torch and duck as a hoard of pigeons swarm out.

History. The warehouse, which is listed, was built in 1833 to a square plan, with extensions added to either end sometime after 1954.
The building is called ‘works’ or ‘bridge works’ on later maps. Like the Bankhall one in Liverpool it was designed so that barges could enter from the canal and be unloaded inside.
A 2004 planning application for conversion into apartments seems to have lapsed.

An aerial photo from 1926 and a map from 1936 showing the warehouse surrounded by other factories. 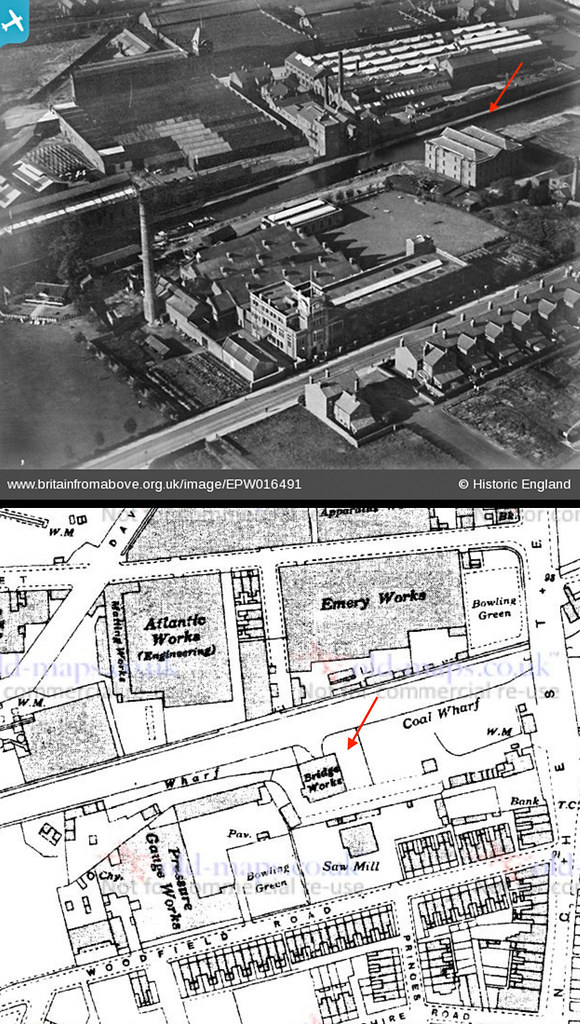 Front view showing extensions to the original Georgian-style block with the yellow cornice - a shed-like extension attached on the right, and a three storey addition on the left with a one-and-a-half height ground floor and loading bay.
The original building had two loading bays on the right with the projecting hoist canopies still visible. 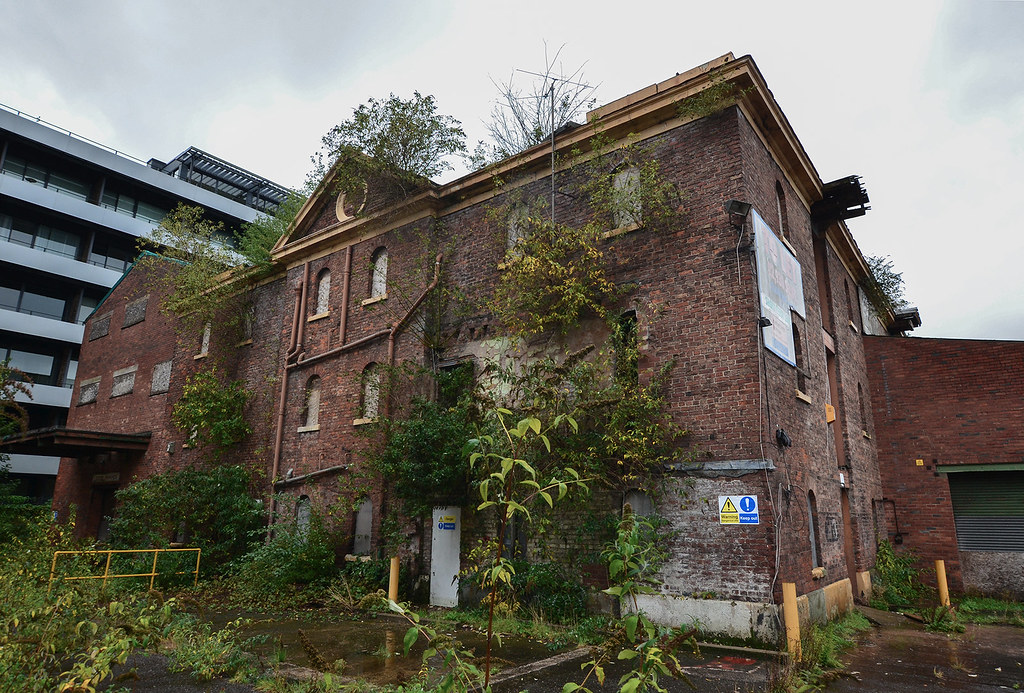 View of part of the original building from within the shed-like extension on the right. 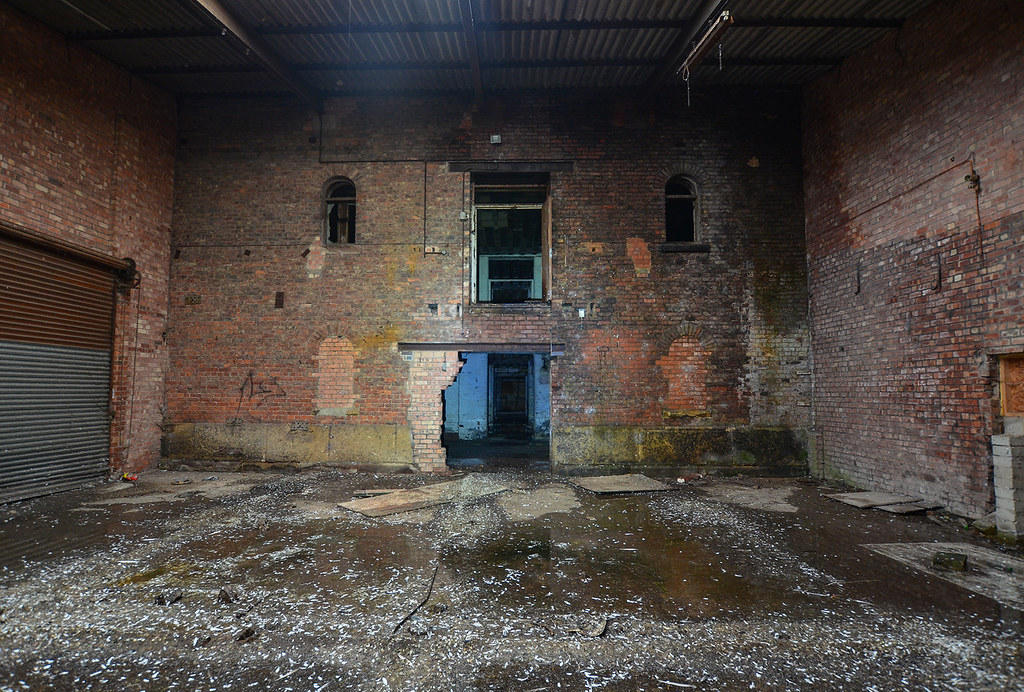 Ground floor of the extension at the other end, and one of the original windows which now look into it. 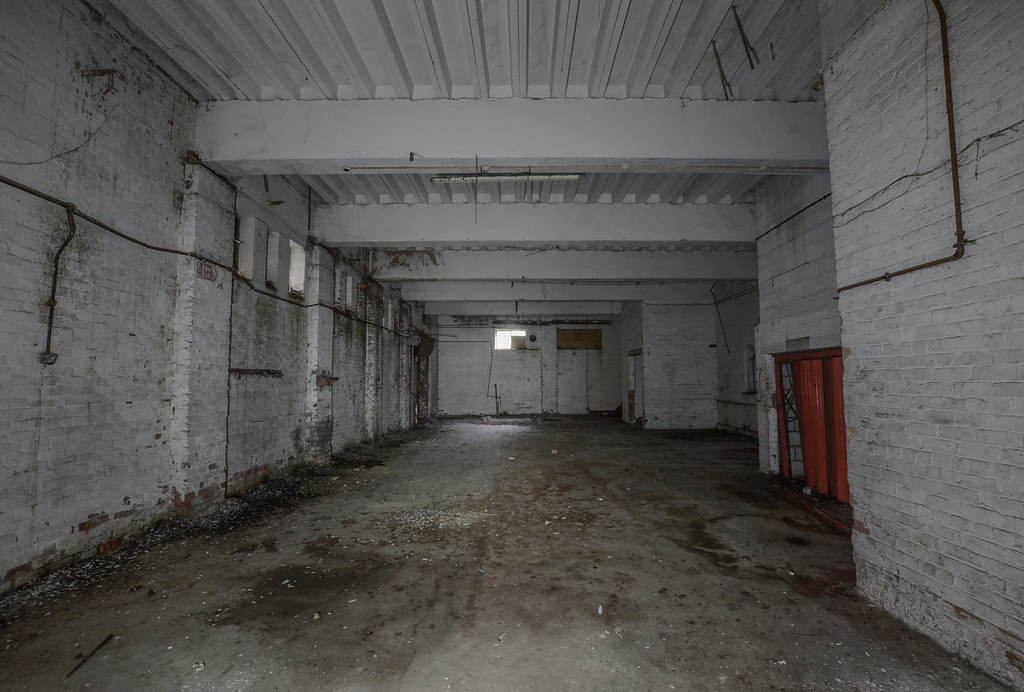 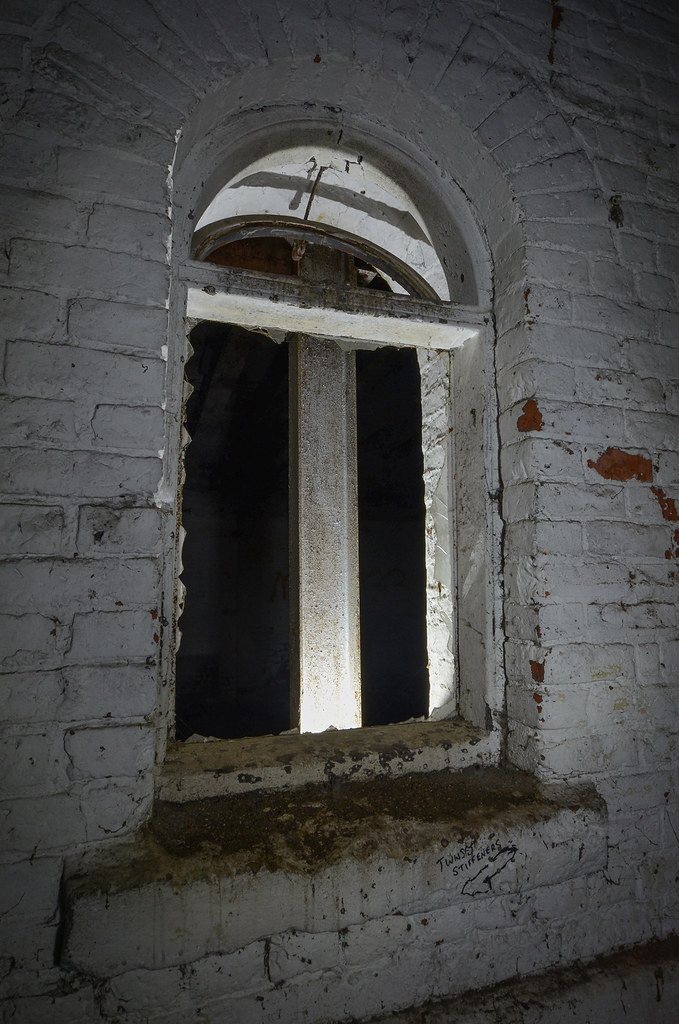 Moving upwards the rest of the place is just empty warehouse spaces, with water dripping through the floors where part of the main roof has collapsed. 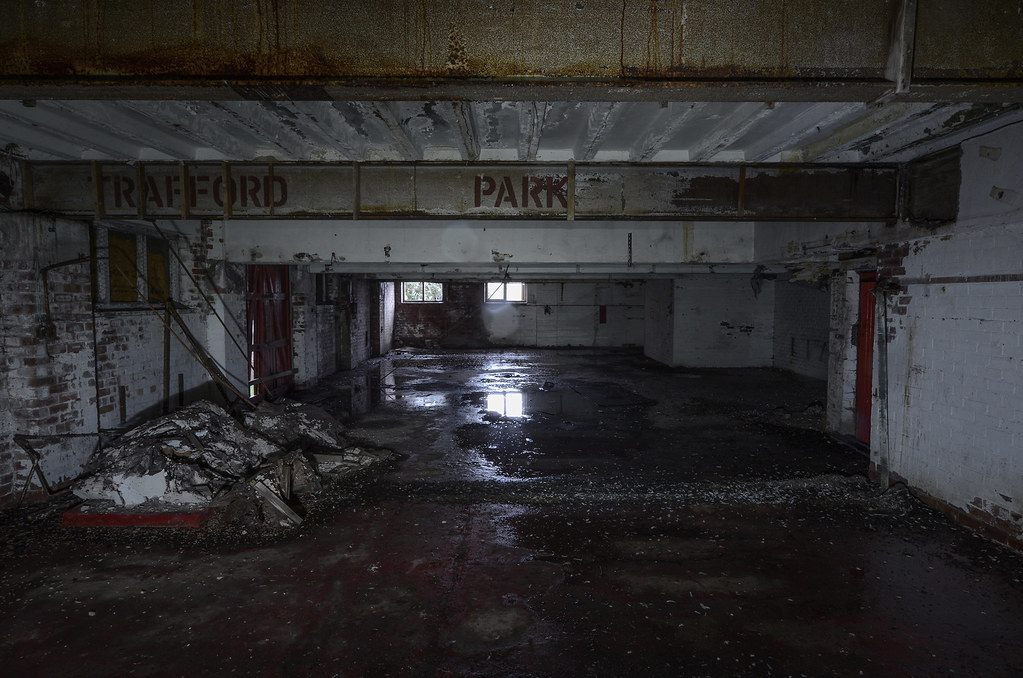 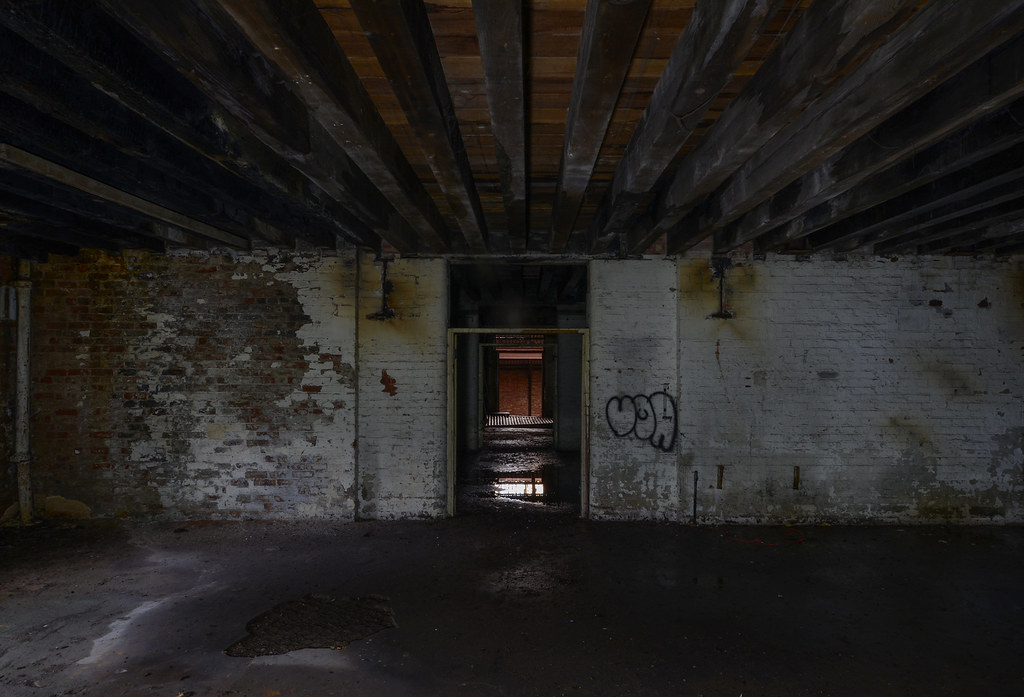 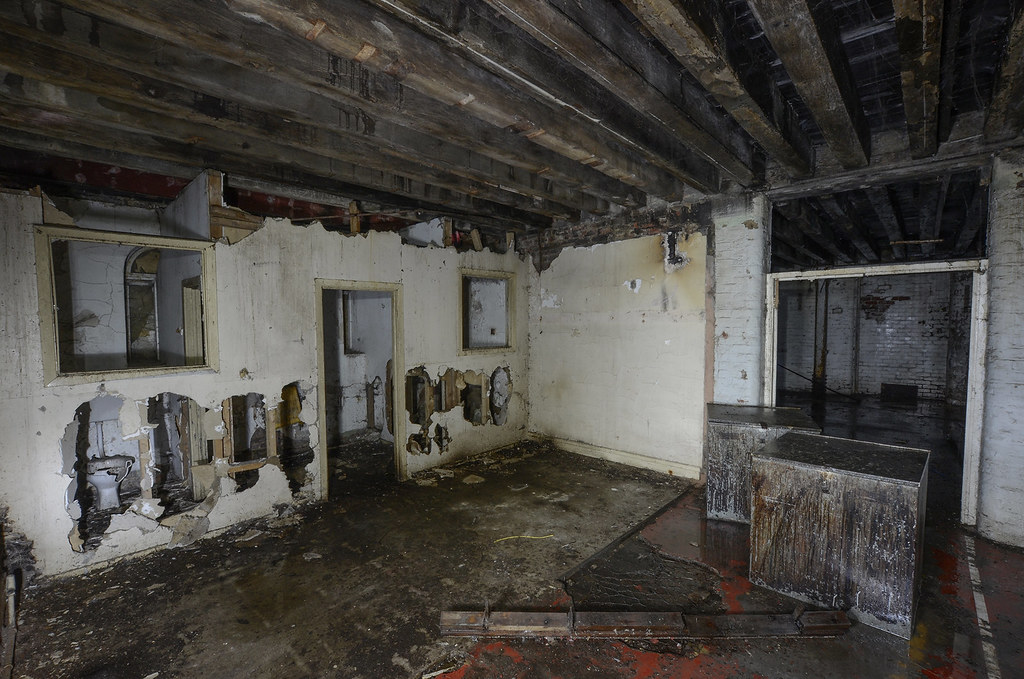 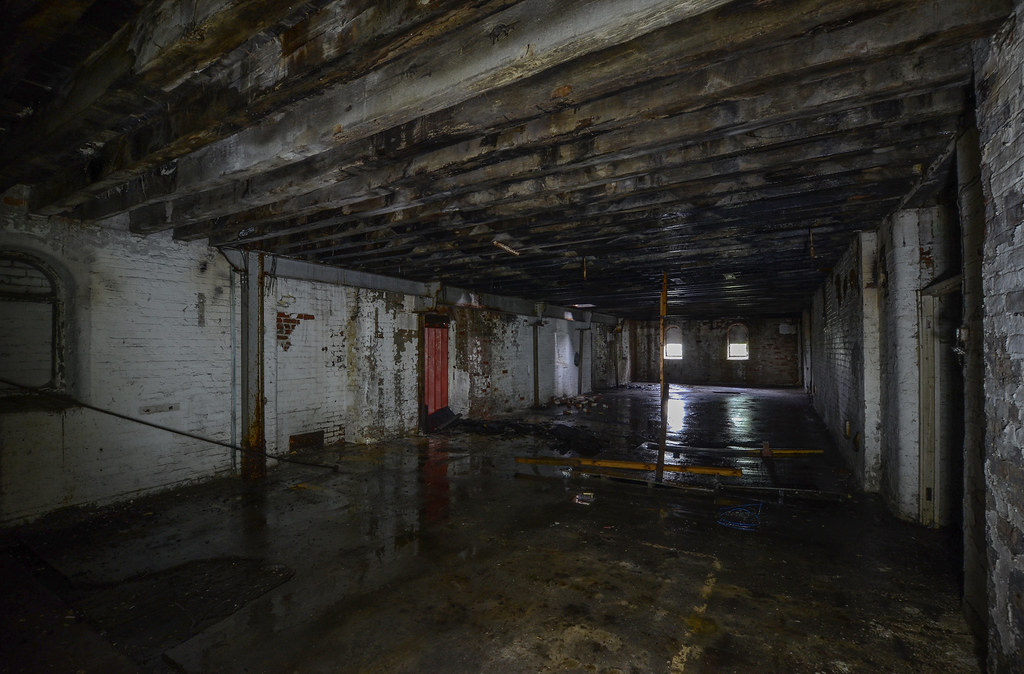 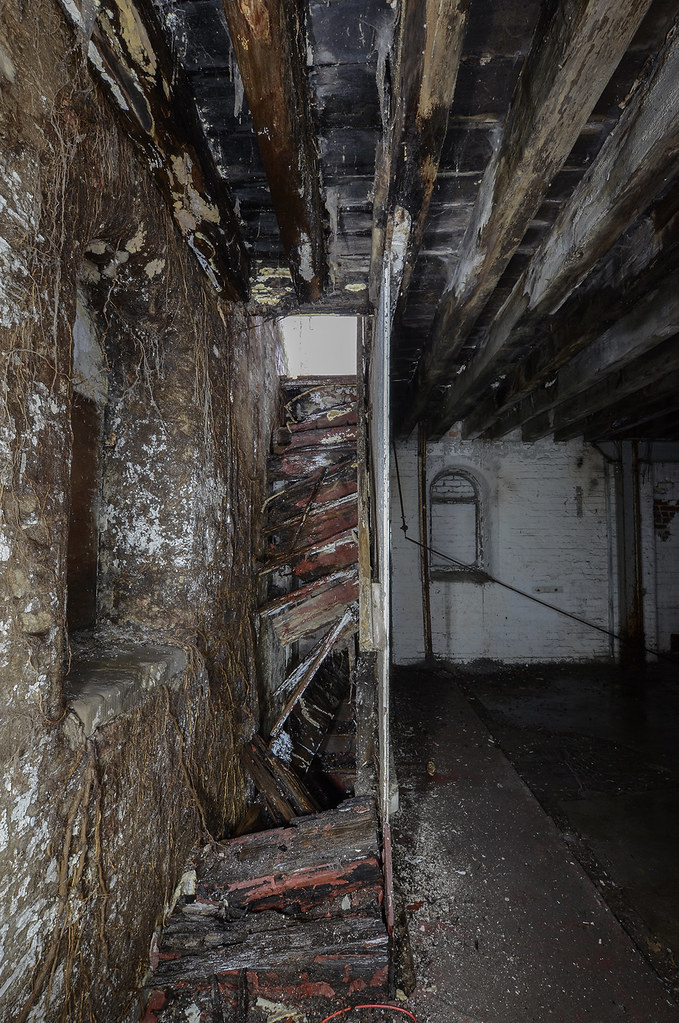 Top floor of the taller extension - the cornice of the original building can be seen running along the right wall. 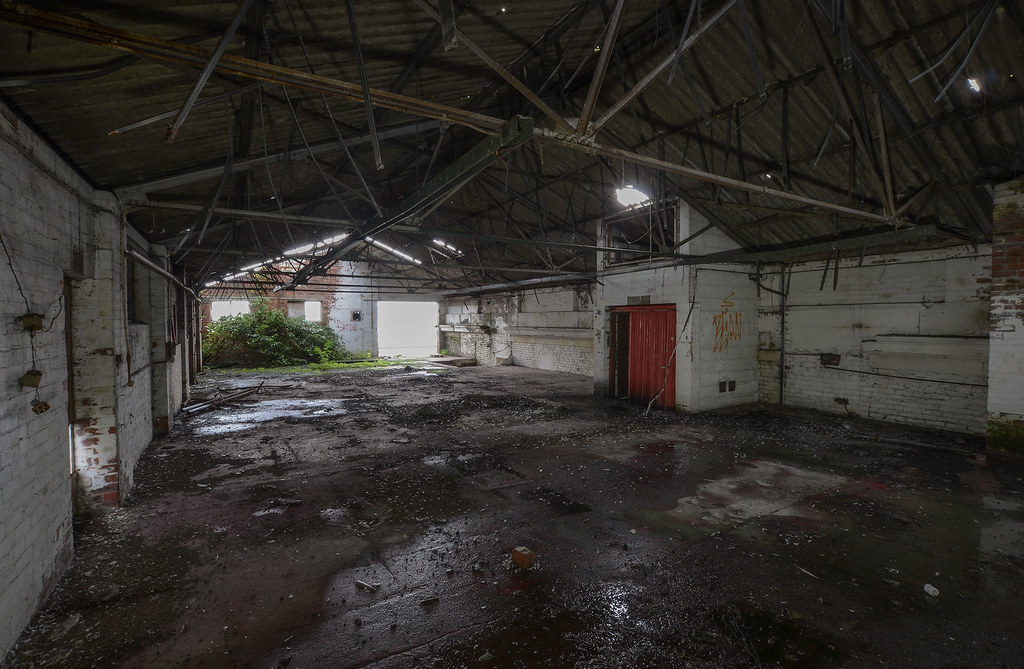 Collapsed roof on the top floor of the main building. 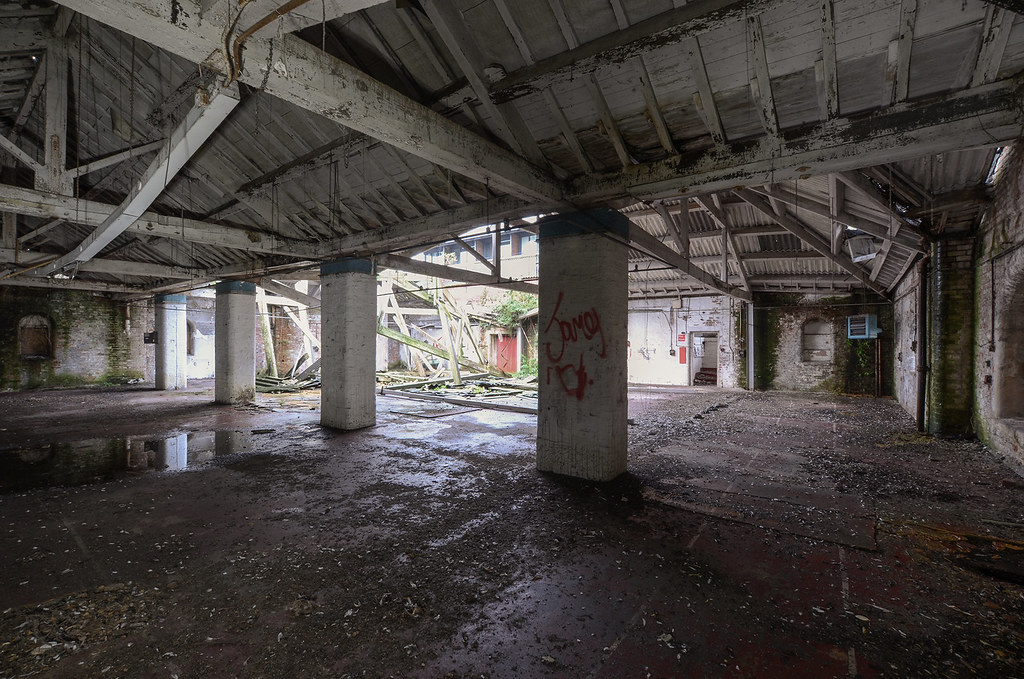 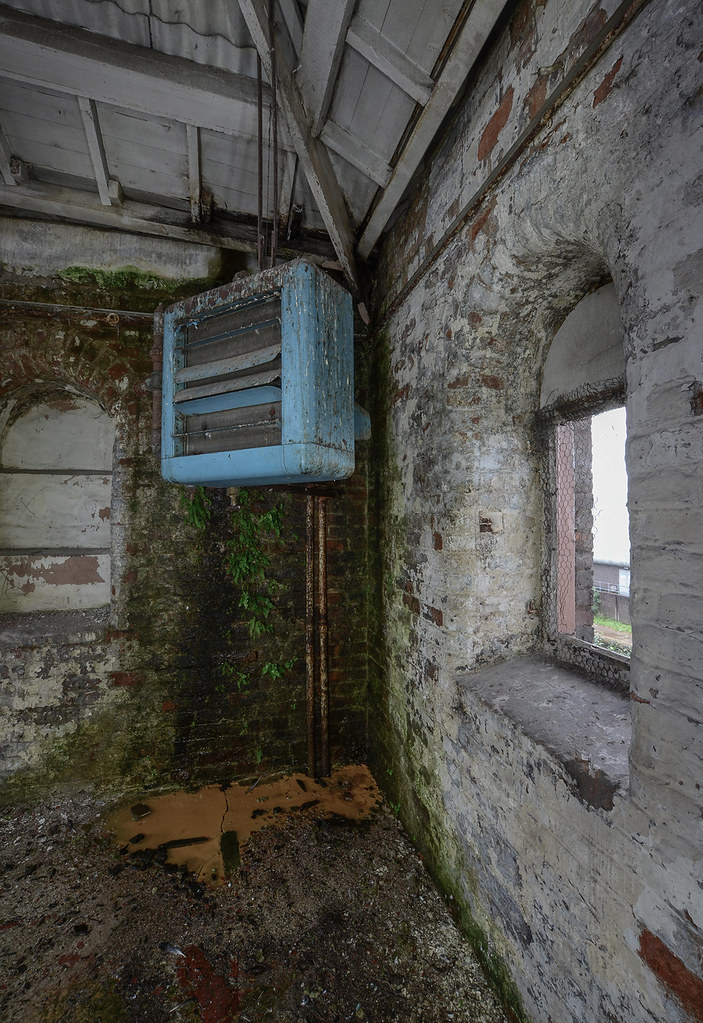 A lightweight lift and a hoist over one of the loading bays, both electrically powered. 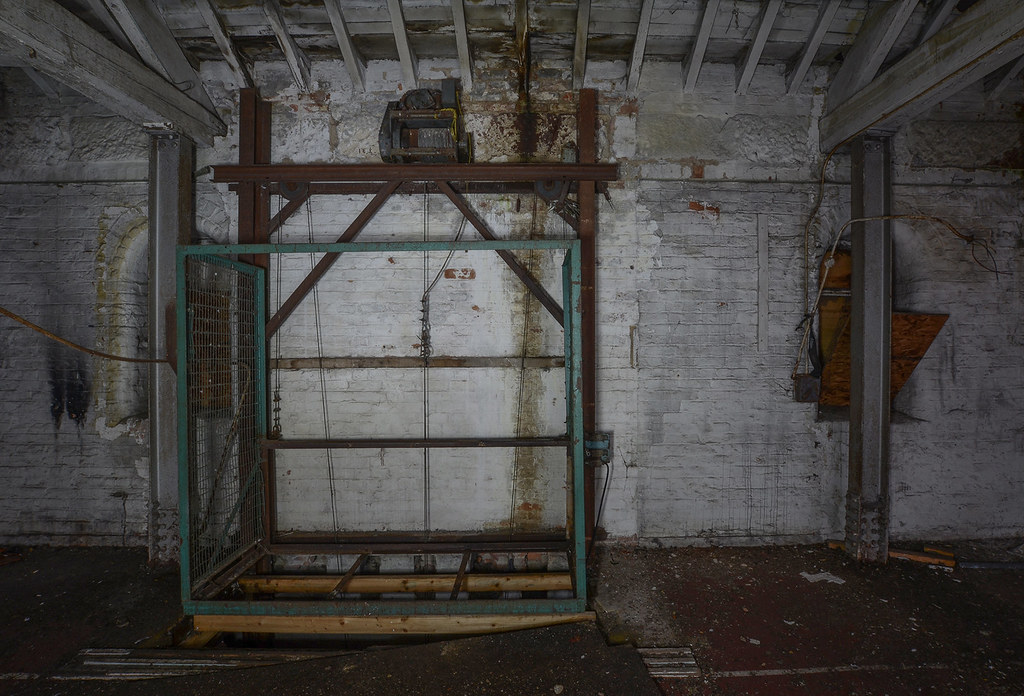 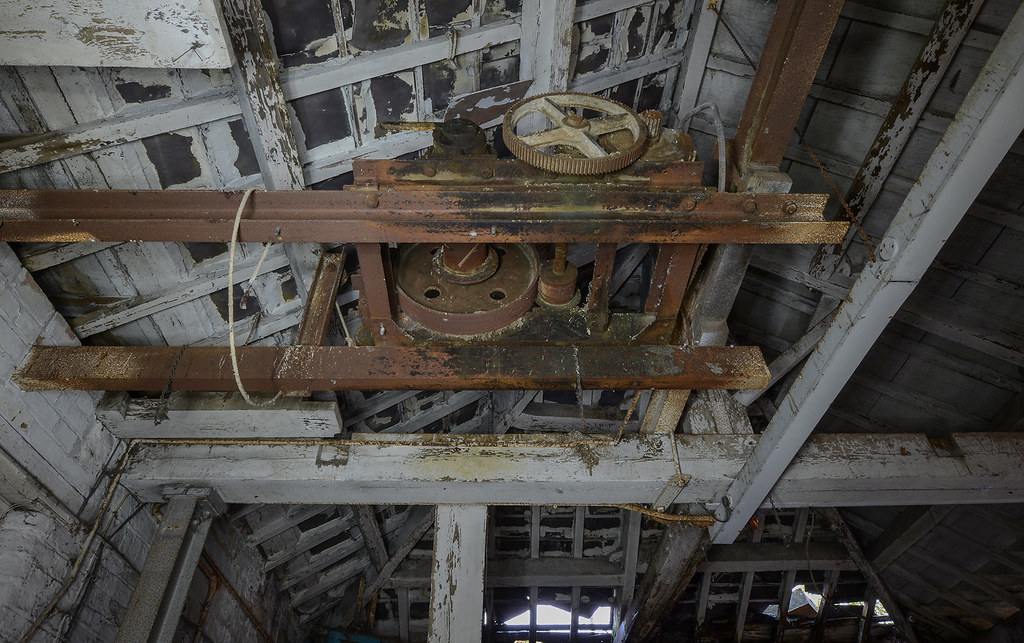 An uninspiring early morning view of Altrincham in the rain. 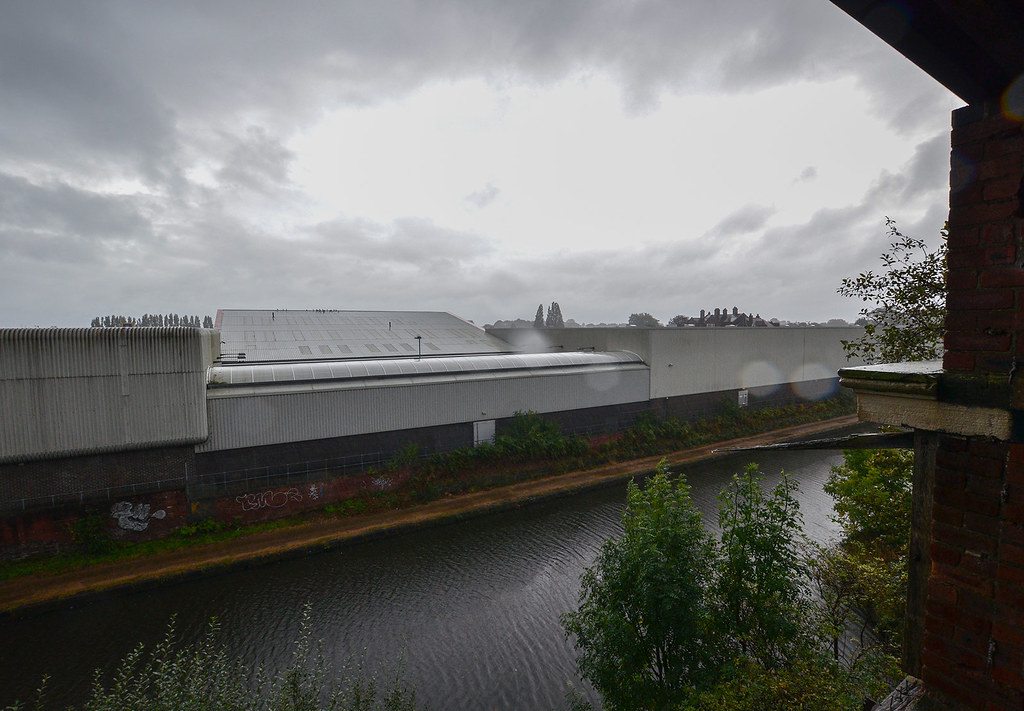 Views from across the canal showing the double height arched opening, now bricked up, where the barges went in. 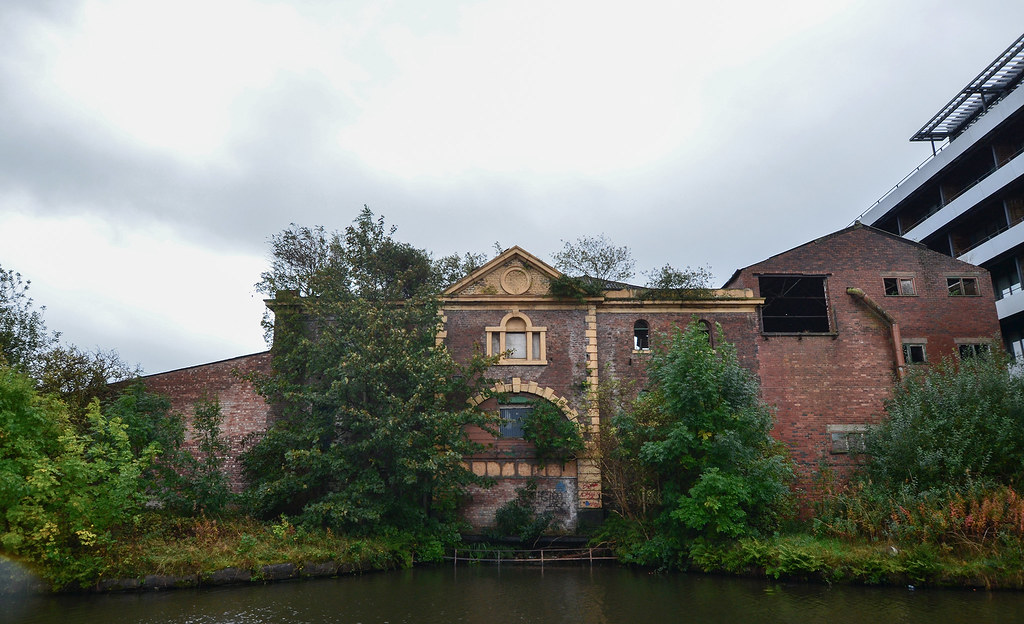 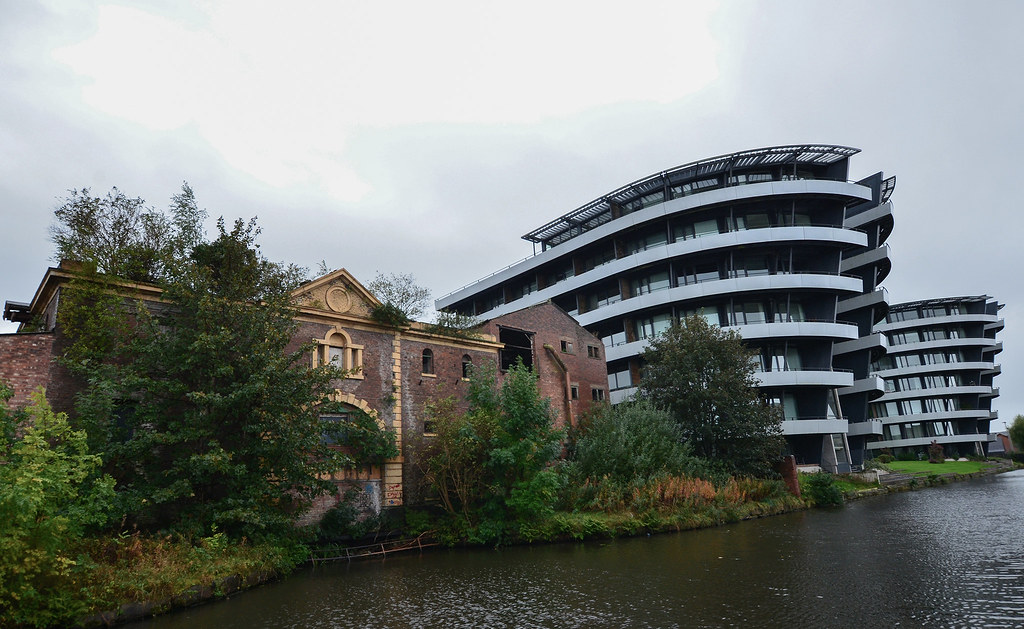