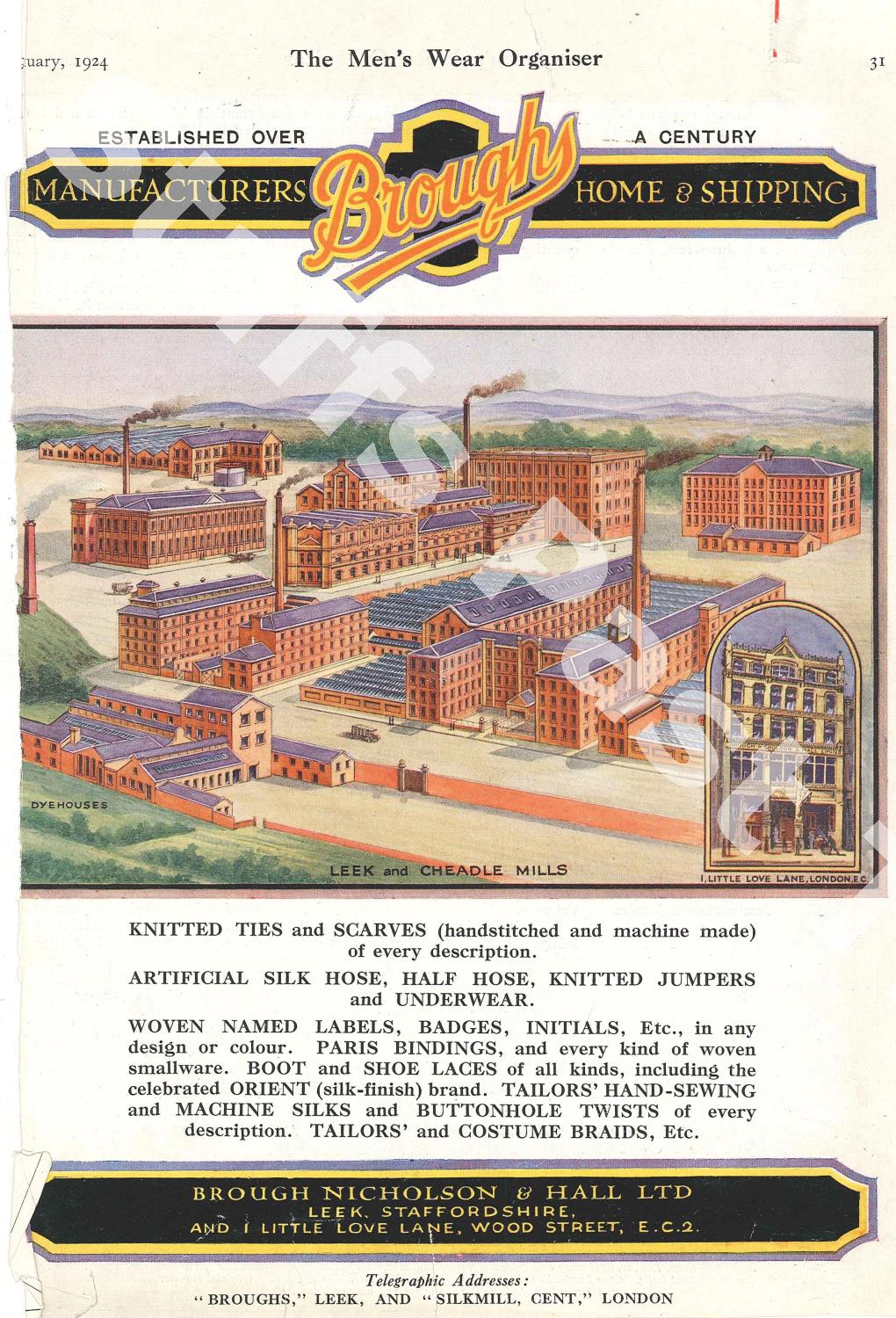 Brough Nicholson & Hall were once one of the major employers in the milling town of Leek, the above image shows the vastness of their factories. The Royal York Mill is the tall, rectangular, flat roofed one shown towards the top of the image. A number of the other buildings survive to this day in various states; some derelict and some converted in to apartments. Well Street Mill which is the small one below the York Mill chimney is currently undergoing conversion, whilst the large London Mill on the top right of the image lays derelict but currently inaccessible (It's supposedly very empty).

The business was founded by John Brough, a silk manufacturer in about 1812. After his early efforts, his sons, Joshua, James and John took over the mantle. The brothers had a factory built on Union Street in 1844 and later took on partners, Joshua Nicholson and B.B. Nixon to became J. and J. Brough, Nicholson & Co. in 1863. Soon after a warehouse was built on Cross Street in about 1865, close to Hope Mill on Fountain Street. In less than ten years this mill had been acquired and extended to twice its original size. The partnership was employing 630 workers in 1891. Following a series of changes in the partnership due to deaths and retirements, the firm became Brough, Nicholson & Hall in 1891. The partners soon embarked on a new scheme of development involving the extension of the Cross Street building, and the building of a new mill on Well Street (known from 1900 as Royal York Mill). Around this time the firm also took over the Cecily Mills in Cheadle. In 1968 many of the firms' buildings were demolished, and in 1983 Brough, Nicholson & Hall sold their only remaining premises, Cross Street Mill, to Berisfords, the Congleton ribbon firm.
Click to expand...

In 1898 as part of a wholesale expansion of their operations the Royal York Mill was constructed, I'm not sure of it's original name but it was renamed to this in 1890 following a visit from the Duke of York. After the B N & Hall empire declined the mill changed hands, various companies appear to have occupied the building; York Mill Silk Knitters Ltd, Carina Sportswear Ltd and at some point Italiana Neckwear Limited (incorporated in 1958, seemingly ran by the same people as YMSK) took over the mill, they were in operations until at least the early 1990's, and I presume the majority of the items in the place related to this era, given that there are countless neckwear items. Coincidentally Italiana was in the 1980's ran by a G.R. Hine, presumably of no relation to the asylum architect.

From around about the 1970's the top floor was out of use, and since then seems to have been used purely as storage. On the ground floor there is a small annexe that's inaccessible but was formerly the engineers store and later another stock room, could hold some interesting items. One of the more interesting discoveries was found in the basement. In one corner were a load of what I can only assume were components of the old machinery that would have once been installed in the building, and also a tunnel under the road to the adjacent London Mill. Sadly on the London Mill side this has been partially back filled and boarded over at some point. A calendar in one of the offices from 2011 suggested that at least something was still being undertaken until that point, exactly what remains a bit of a mystery though.

I had wanted to have a look at this one for some time after seeing some reports on here, maybe about 6/7 years ago. Obviously quite a bit of time has gone by since then, but the place is still in very good condition, the roof doesn't appear to be leaking at all but the top floor in particular has become home to a large quantity of pigeons who've made a bit of a mess. There a number of nice old machines as well as literally tonnes of raw material as well as all of the ancillaries needed for production. I would imagine that with the decline of this industry in the UK a lot of these companies will have simply gone out of business. It's a similar case in Stoke on Trent where along side the pottery manufacturers there were all of the companies that made other necessary items; kilns, refractory products etc.

The building is unlisted, but hopefully it has a future, it could make some awesome apartments if done properly. Regular User
Nice report not seen this in a while. Looks more a less the same to me.

Regular User
That’s really nice, somehow not seen this one before.

2 mills for the price of one with that one!

Regular User
Good to see it worked out! mans office is a lot less lived in now by the look of it.
flickr

Speed said:
Good to see it worked out! mans office is a lot less lived in now by the look of it.
Click to expand...

Any ideas what the office was being used for back then? According to the plans I found back in the day it was the Steam Room.
http://www.ravenwing93.co.uk

Regular User
I dont know really. I just remember opening the door and the guys broadband router was still blinking away on the desk and i thought that seemed a strange thing to see in a otherwise derelict mill. The room was pretty untouched too so i didn't poke about too much..
flickr

Speed said:
I dont know really. I just remember opening the door and the guys broadband router was still blinking away on the desk and i thought that seemed a strange thing to see in a otherwise derelict mill. The room was pretty untouched too so i didn't poke about too much..
Click to expand...

Does seem odd that it was in use so recently, everything bar the calendar looked at least 20 years old! Who knows
http://www.ravenwing93.co.uk