Regular User
Whilst looking up the location of a canal warehouse on old maps I couldn’t help but notice a short disused railway tunnel next to the building
(for a report on the canal warehouse itself see https://www.28dayslater.co.uk/threads/bankhall-street-canal-warehouse-liverpool-may-2019.118146/).
This tunnel starts in a cutting about 400 yards inland (east), running past the warehouse and then under the Leeds and Liverpool Canal.
Map (1908) and current satellite view of the area. 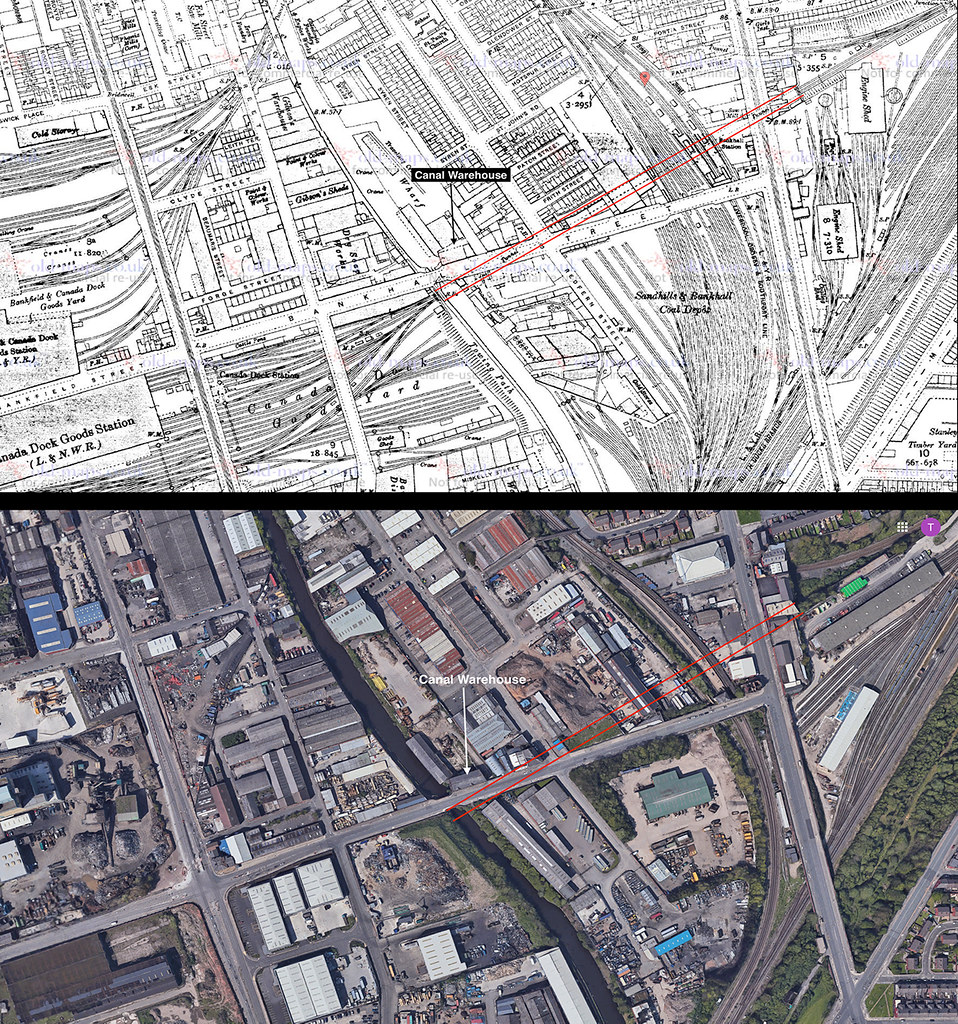 There was no sign of a tunnel portal near the canal and the location of the portal in the cutting is such that it’s not easily seen from surrounding roads.
Google satellite view was ambiguous so the only way was to go and have a look in person.
The tunnel did turn out to be accessible - it’s actually called the Canada Dock tunnel had I been bothered to do any research beforehand - and it’s just your typical rail tunnel with nothing much to see.
The photos aren’t great because it was quite humid and misty down there and as usual I only had a small torch. 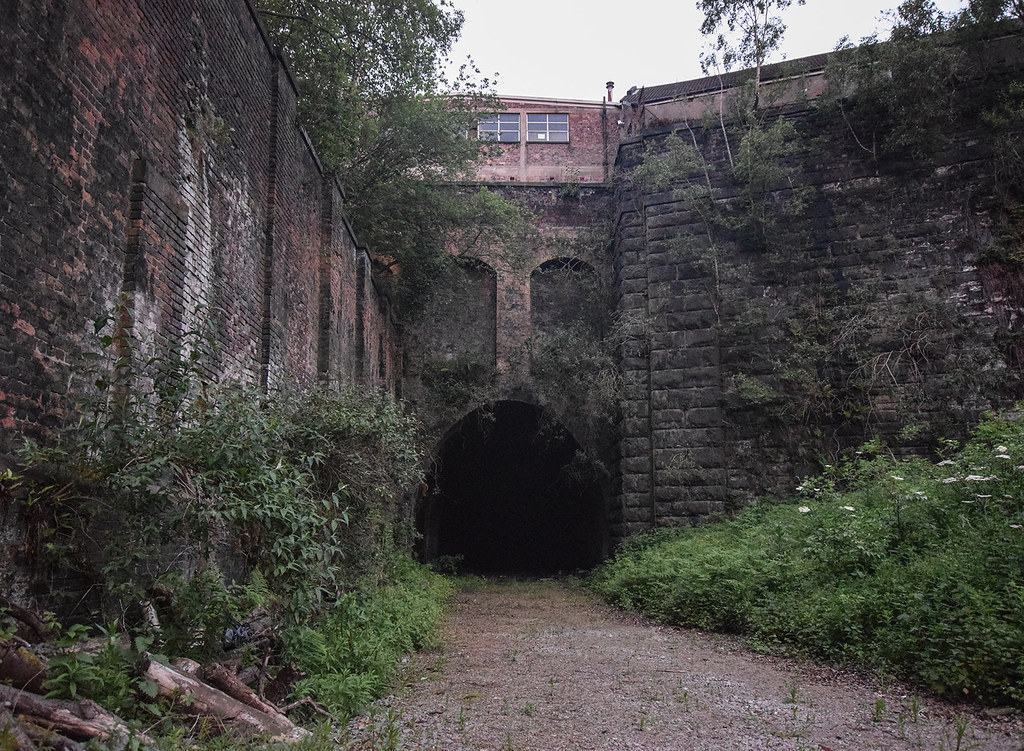 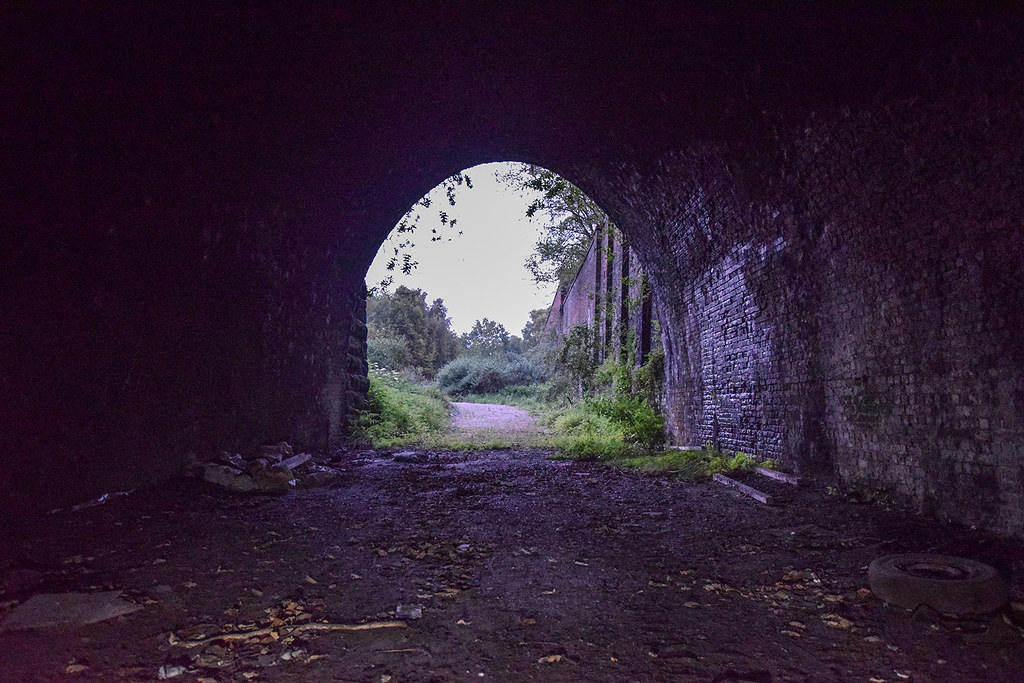 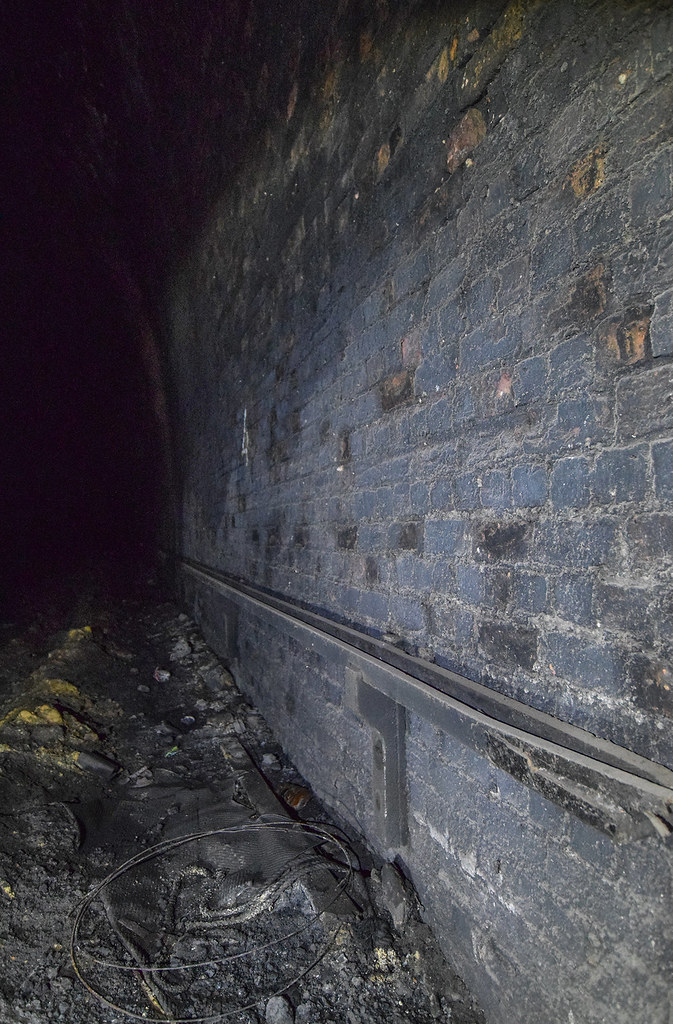 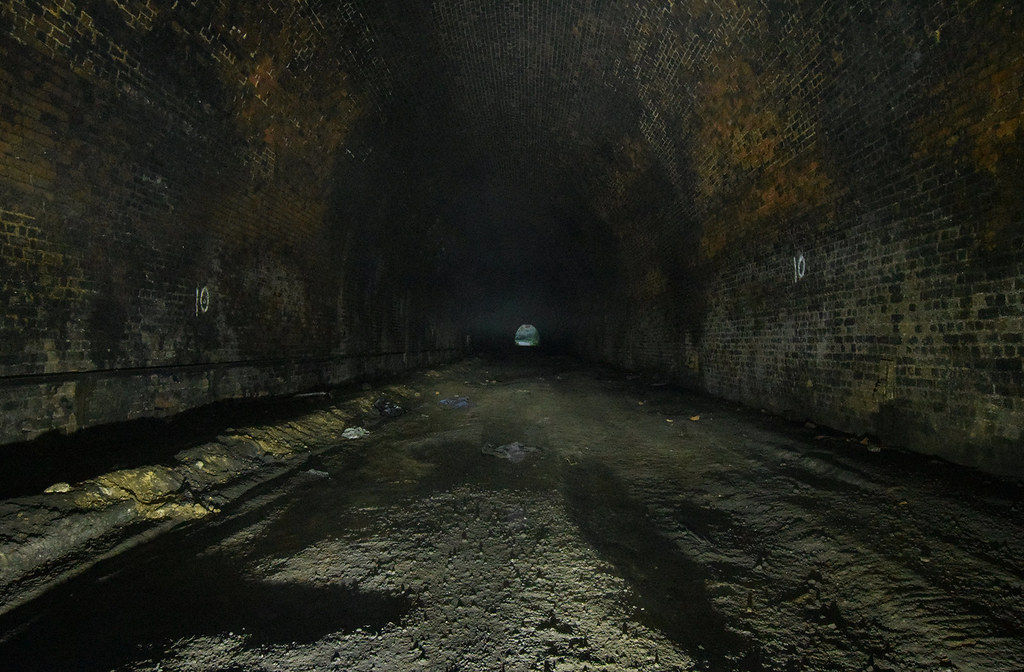 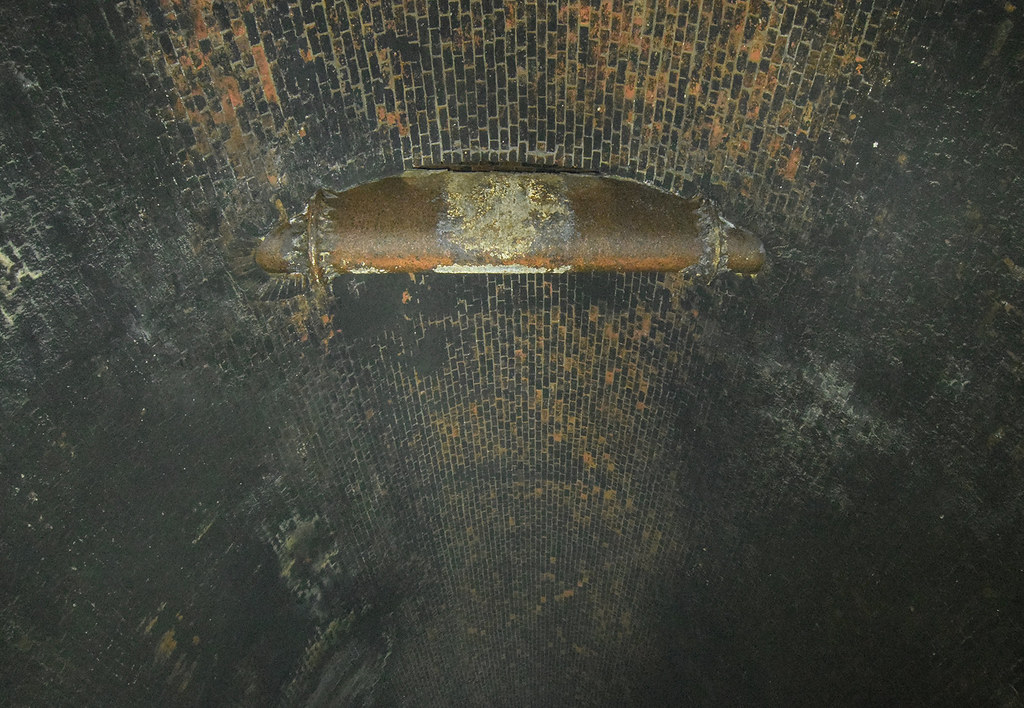 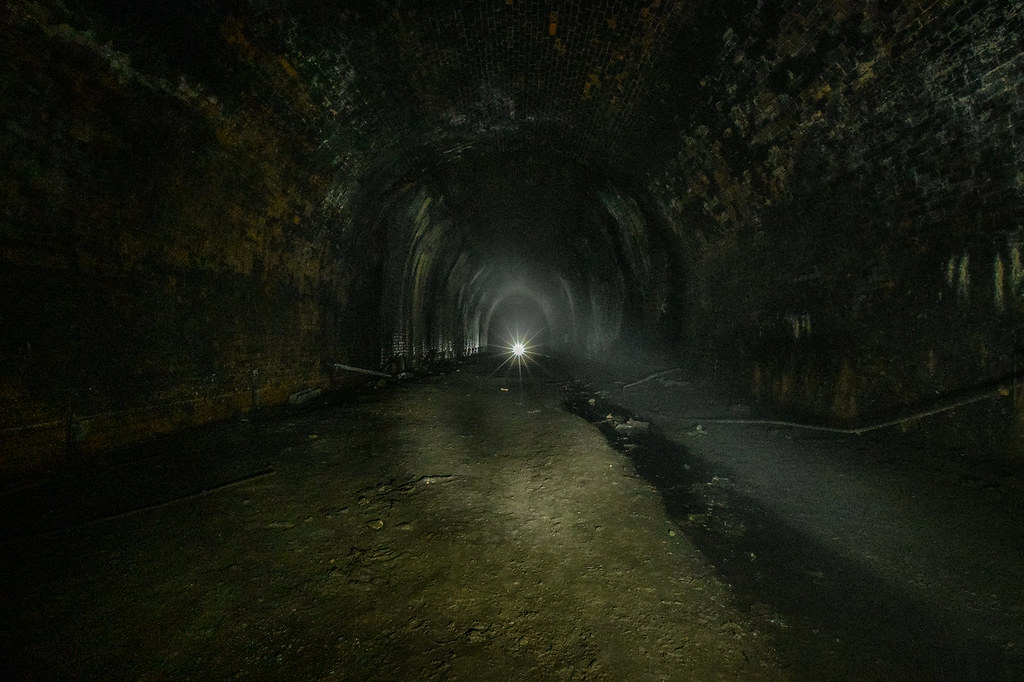 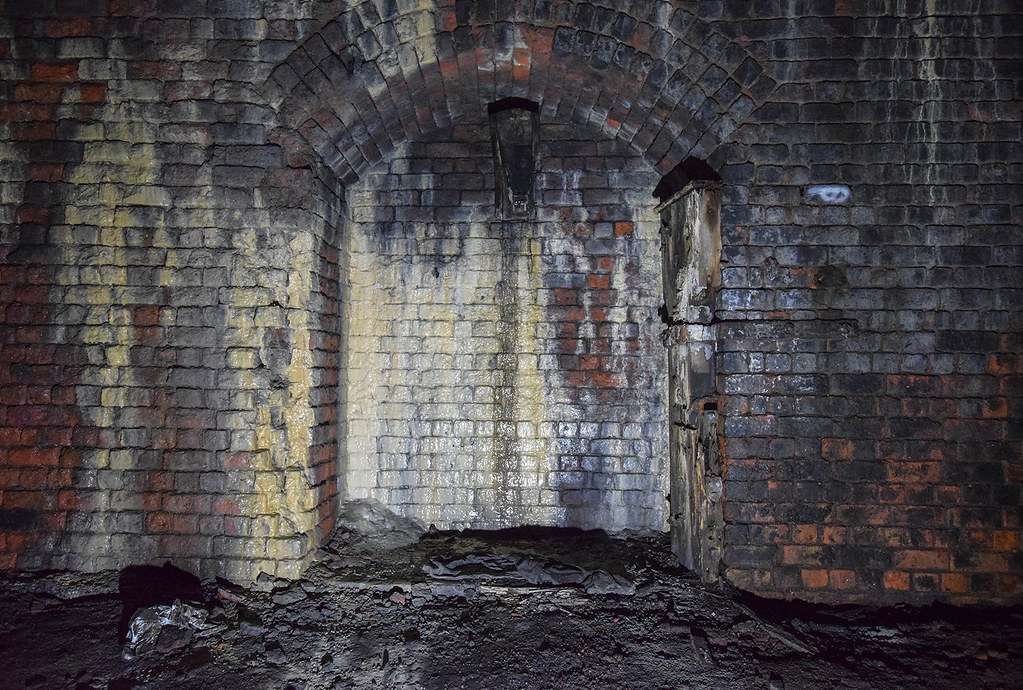 The end - you can’t quite see because of the haze, but it finishes in a neat wall. This is under the seaward (west) side of the canal, presumably the source of the water running down the walls in this section. 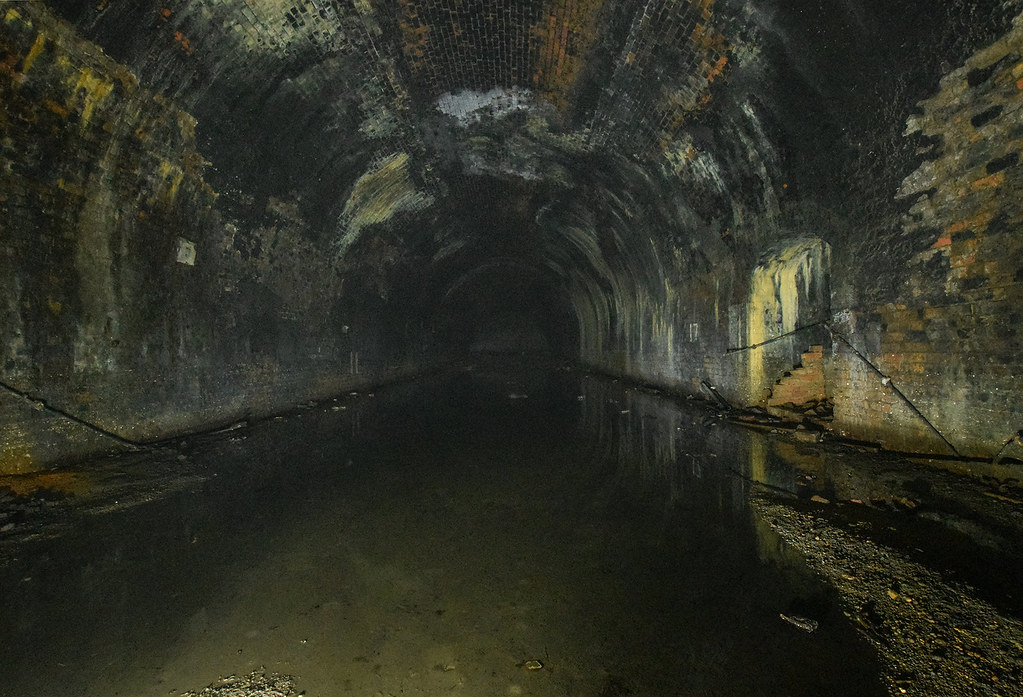 The reason I couldn’t find the portal near the canal is because the ground level was raised by several yards in that area, which used to be sidings.
A couple of old photos looking back into the tunnel - the canal is immediately above the portal on the top one (1930s).
The bottom one (1980s) shows the portal from further away in the sidings, with the roof of the canal warehouse just visible over the wall on the left. 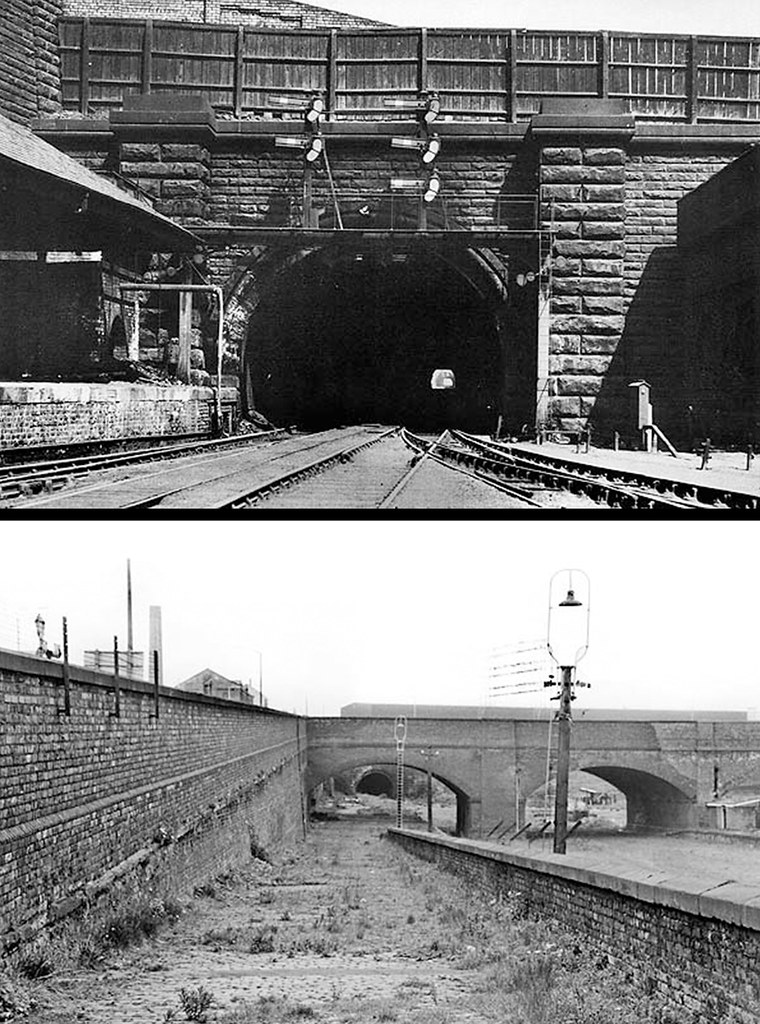 Some after-the-event history, mostly from http://www.disused-stations.org.uk/c/canada_dock_goods/index50.shtml, which is also the source of the old photos.

The tunnel (427 yards) was built in in 1866 to connect the Liverpool and Manchester railways to Canada Dock via a large goods yard and station, as seen in the early map above.

“On 4 May 1941 Canada Dock goods station was so badly damaged (by the Luftwaffe) that it was put out of action. The goods station building was completely destroyed and the yard flooded as a bomb hit the Leeds & Liverpool Canal.
A locomotive managed to escape into the Canada Dock tunnel just as the water level was about to reach its firebox….The last trains ran from Canada Dock goods on 3 September 1982…marking the absolute end of rail traffic…
The yard area and passenger station remained in a derelict condition until 1992 when the whole area was filled in burying the eastern end of the site and the western portal of the Canada Dock tunnel.”

The remains of the goods station on the dock road were only finally demolished about 6 months ago https://www.28dayslater.co.uk/threads/sidings-shed-liverpool-1016.112615/#post-1201385.

I initially thought my pictures might be the only ones of this little tunnel but I’ve subsequently found some by somebody who must be a local rail enthusiast judging by what he takes pictures of
https://s153.photobucket.com/user/oldliverpoolrailways/library/Canada Dock Tunnel?page=1.

As with all of the derelict Liverpool rail tunnels, there has been some discussion about reusing this one, particularly since it could help ferry people to the new Everton stadium planned for Bramley-Moore Dock
https://www.liverpoolecho.co.uk/news/liverpool-news/could-new-sergeant-pepper-rail-12765049.