Sadly there's not too much to be found on this spot in terms of history. Cave Adullam Church was opened in 1860 by the Particular Baptists, who had formed in 1845.
The Cave Adullam Church, of the Particular Baptists, opened their Sunday school in 1860, after the Chapel was constructed in 1859.
Haslingden has had a conservation project outlined to restore and conserve the historic buildings in the area.
The chapel is not within the Conservation Area boundary but it is considered to contribute to the variety and interest of the area, especially in the context of other ecclesiastical buildings in the town.
For that reason work began to strip and renovate the property. 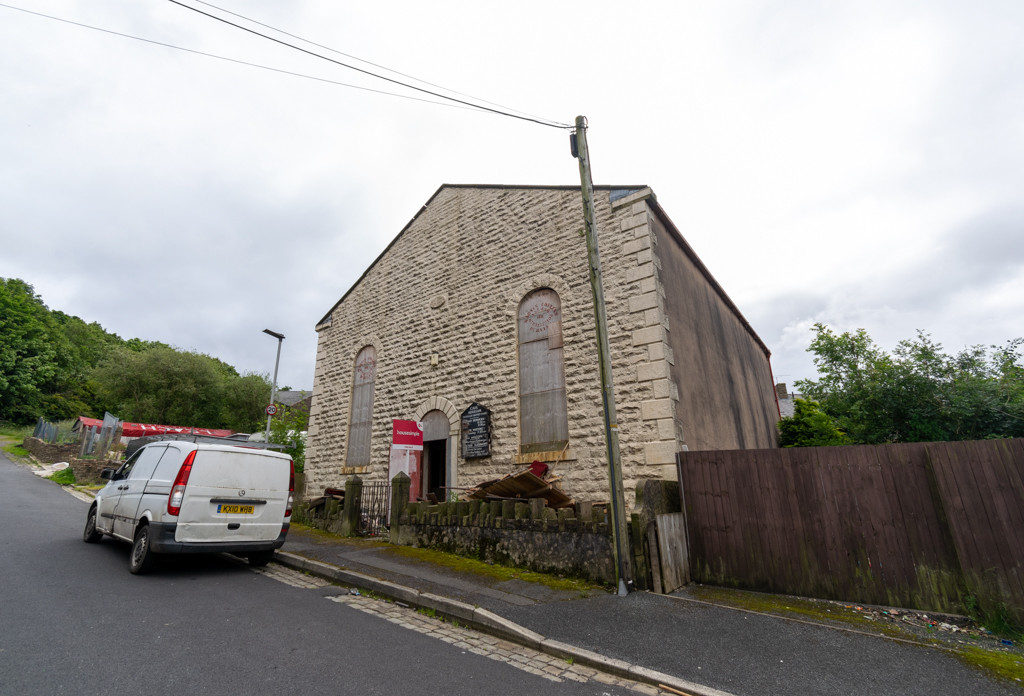 During a mini two day mission checking a number of churches around the area, we came to this one on our second day.
We had checked the church for a way in months and months ago with @UrbandonedTeam but the low number of possible access points meant we had no luck.
However, during our recent visit alone we arrived outside to see the door wide open and a white van sat at the front of the chapel. Loud banging could be heard inside and it didn't take long to realise people were stripping it.
Curious about the decor inside, we asked if we could get a look around. The two guys working on site were very kind and allowed us in; we had caught it at the right time.
The pews still sat upright in the centre of the room, the kitchen space to the back of the property was still full and the roof was mainly intact with the amazing light fixtures still hanging and glass-work in place.
In one of the corners work lights shone giving the main room a golden tint. The workers spent 20 minutes or so inside before leaving us to it as they went off for lunch, so we had the chapel to ourselves which made it more like a typical explore.
They were happy with us going in any part of the church including the roof space (which was becoming a walkway of beams as they had began to kick it through, so we left that part to them) which allowed us to capture the whole site before it was all gone. 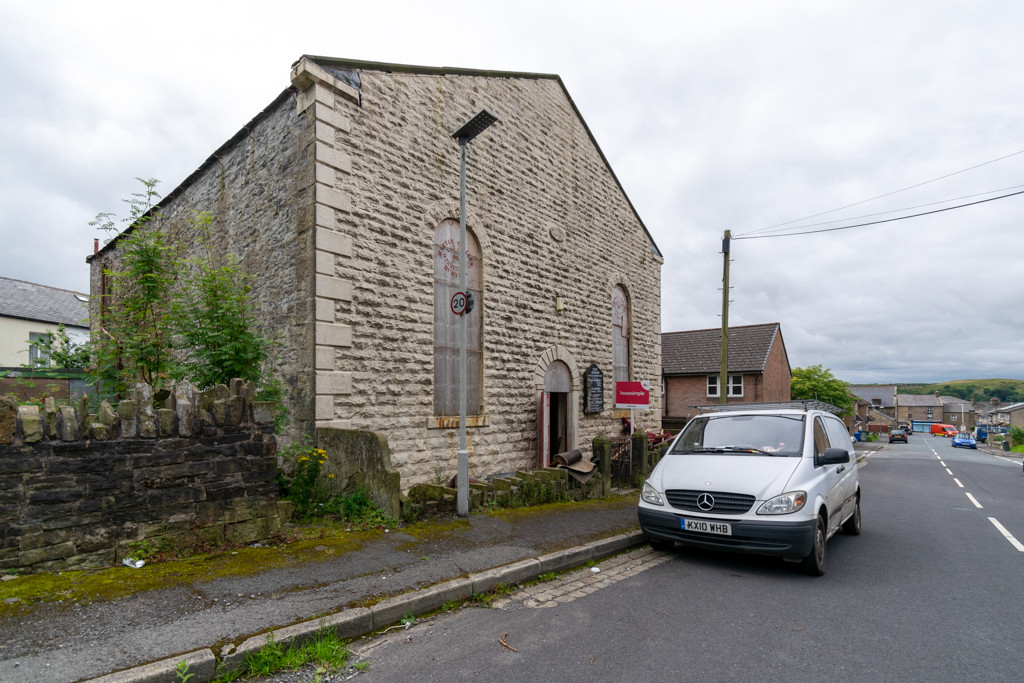 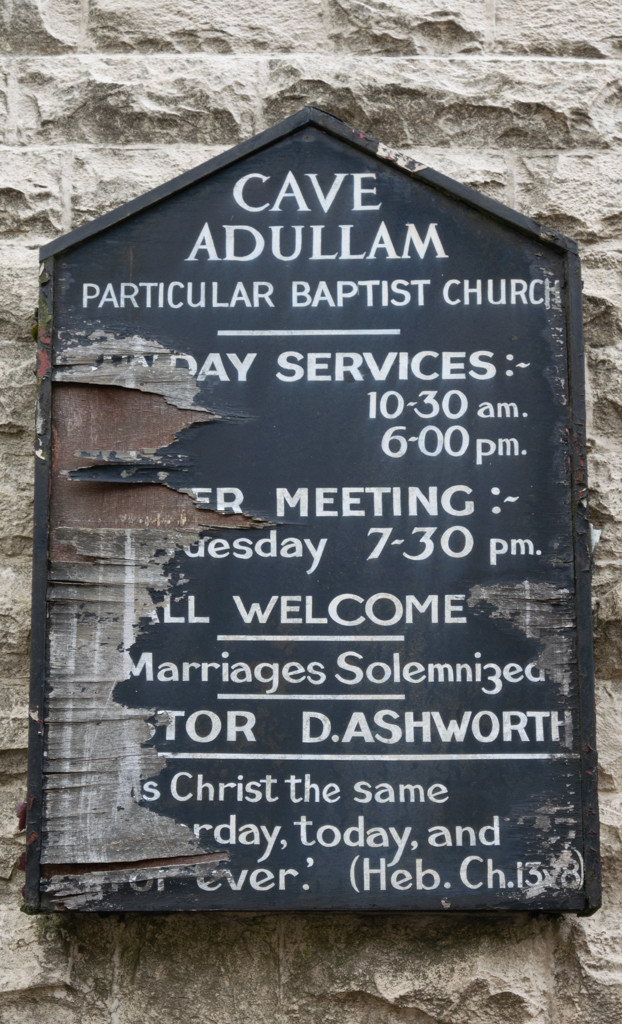 The entrance to the church. 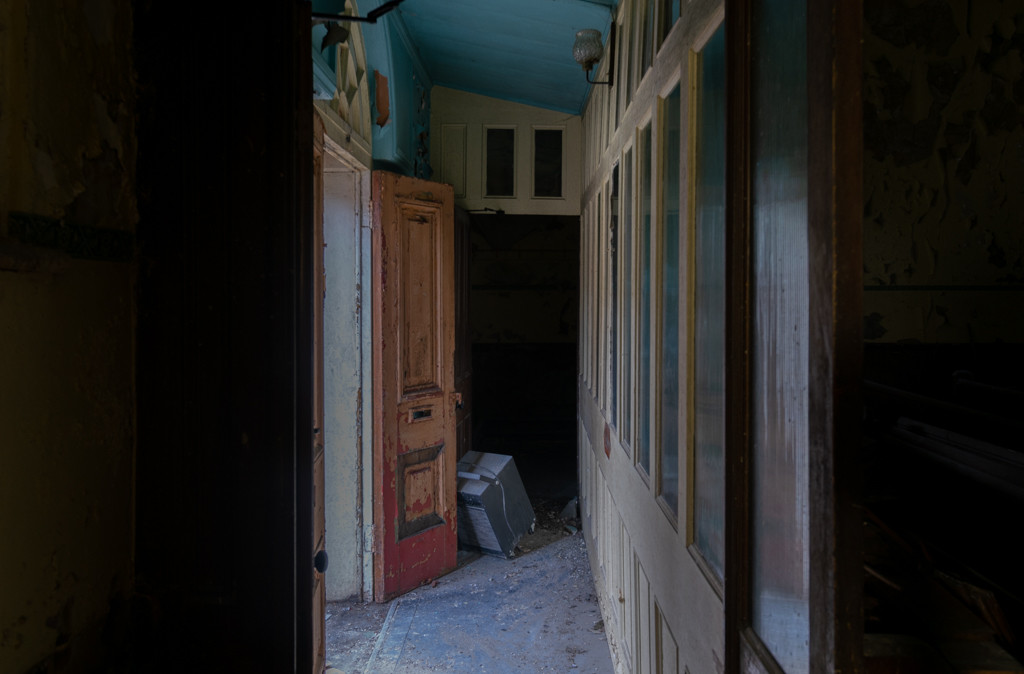 You can see what effect the work lights had in creating a great set of colours inside. 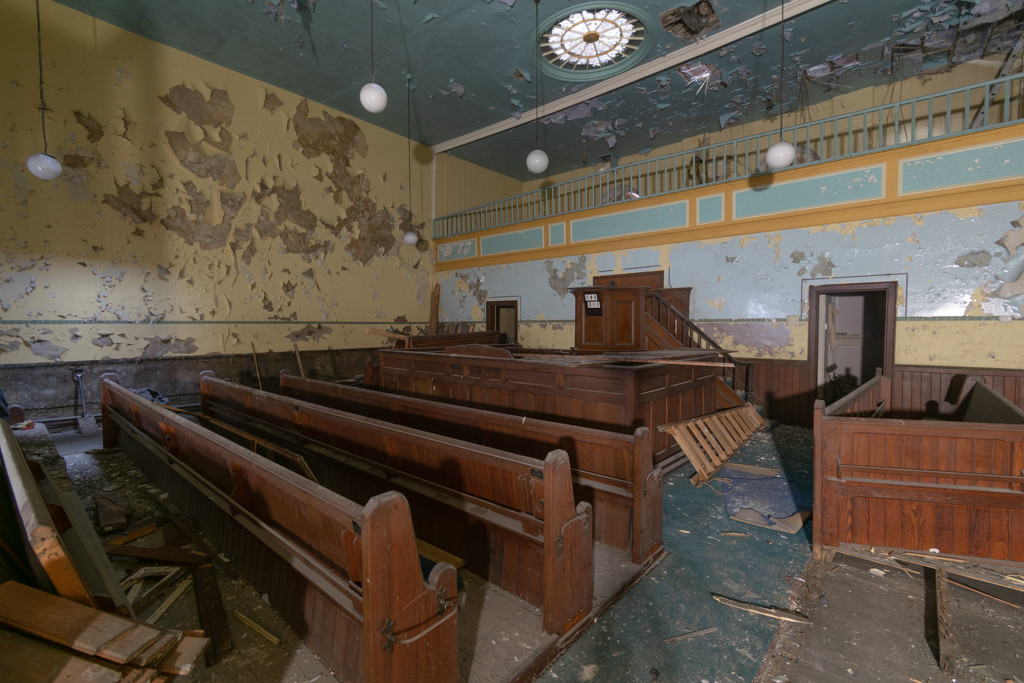 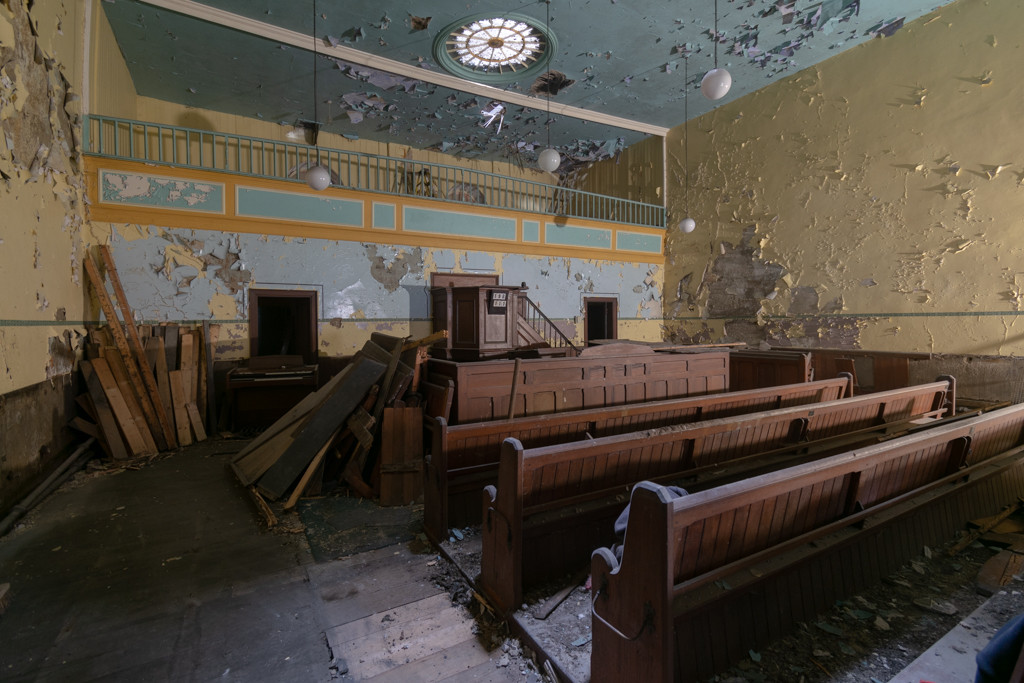 Brooms, spades and other equipment could be found around the main hall along with small piles of debris from the collapsing roof and things they had moved out prior. 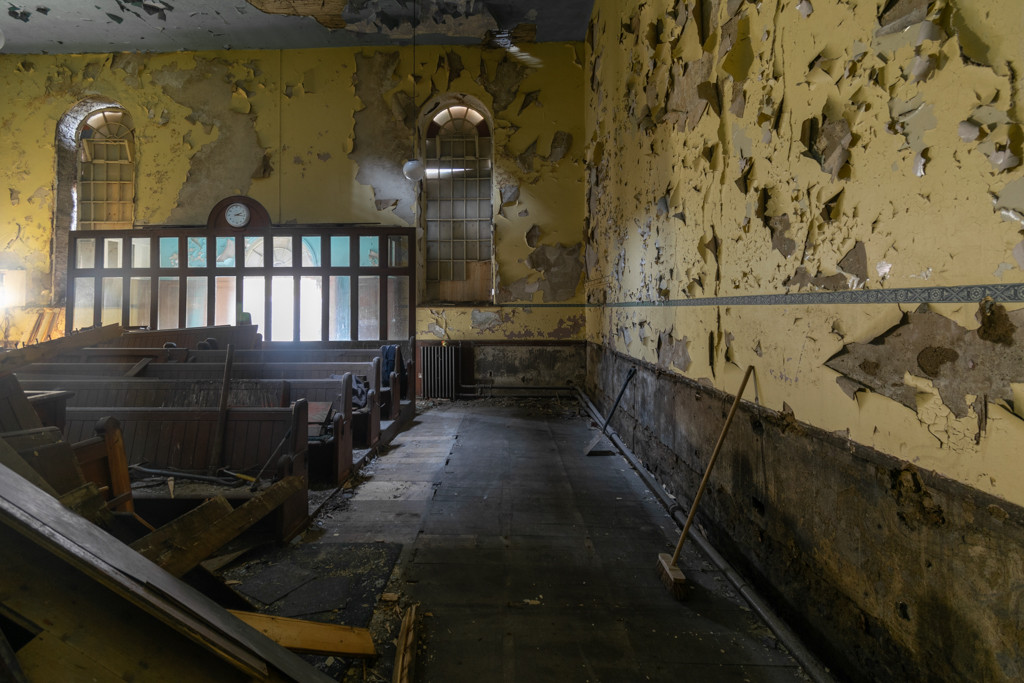 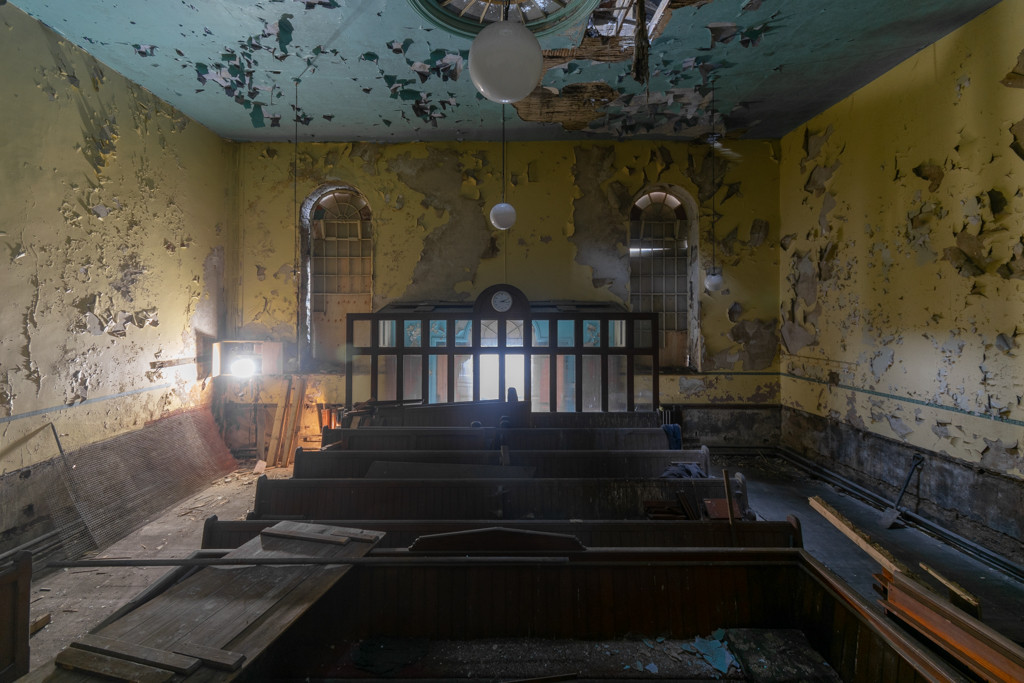 This is annoyingly off centred but I thought it is worth including anyways :) 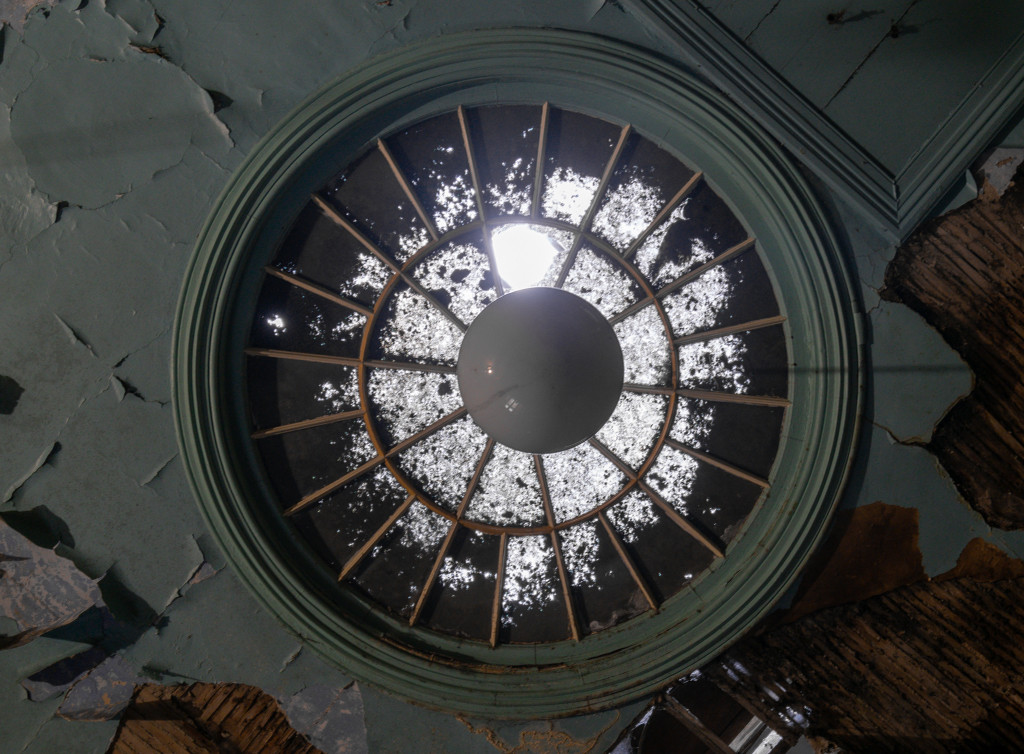 A room with full cupboards at the back of the hall, used as a sort of kitchen space, with coat hangers and other storage. 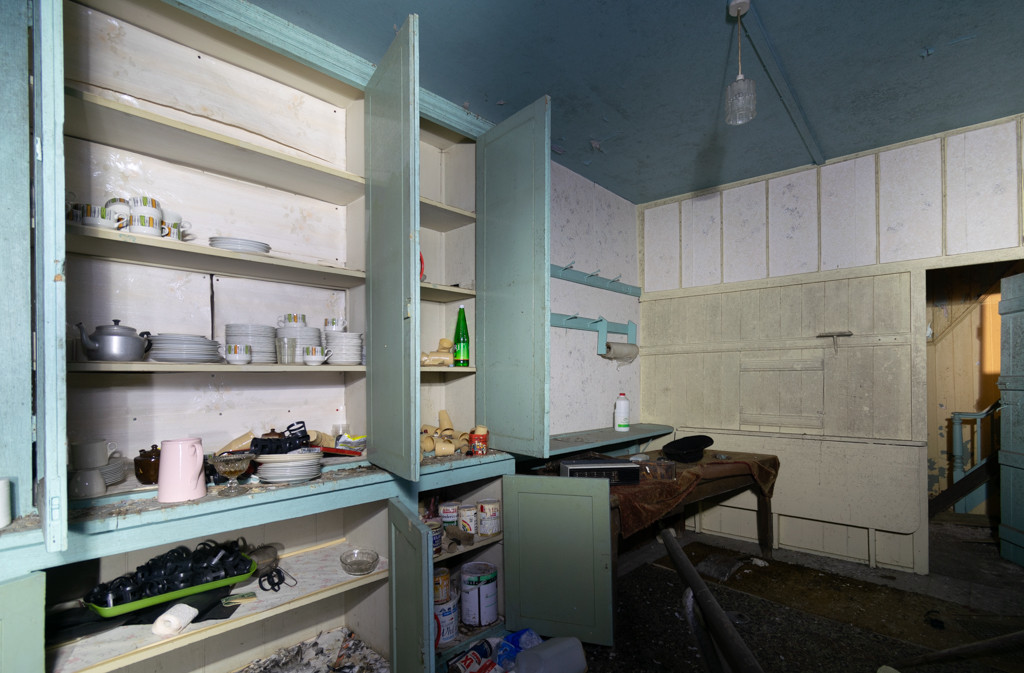 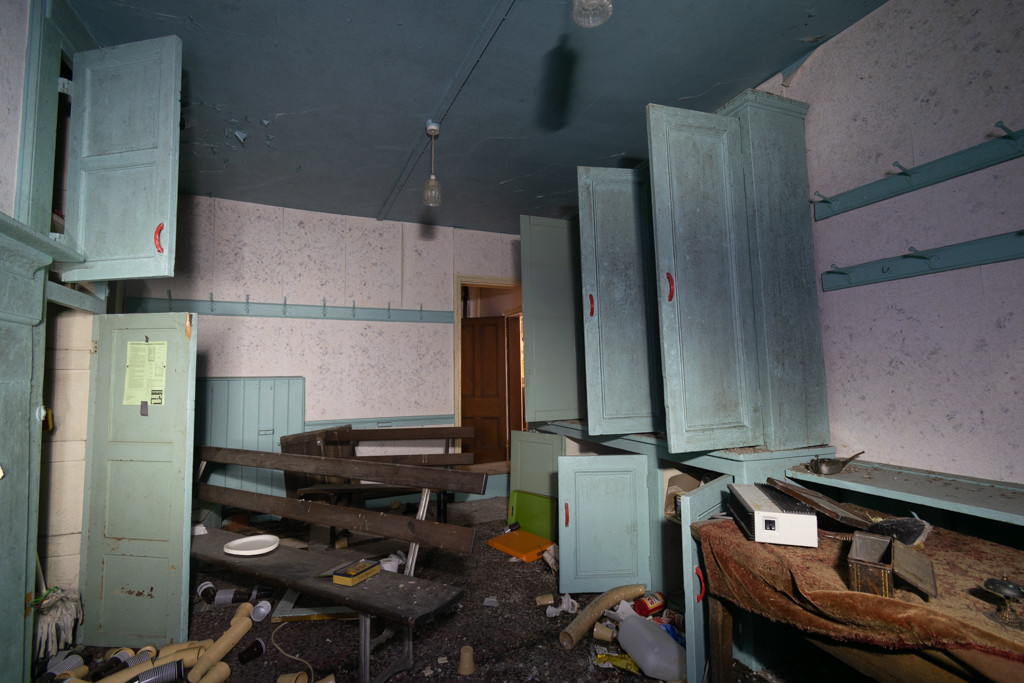 The work lights shone through the doorway to light up the staircase leading to the balcony. 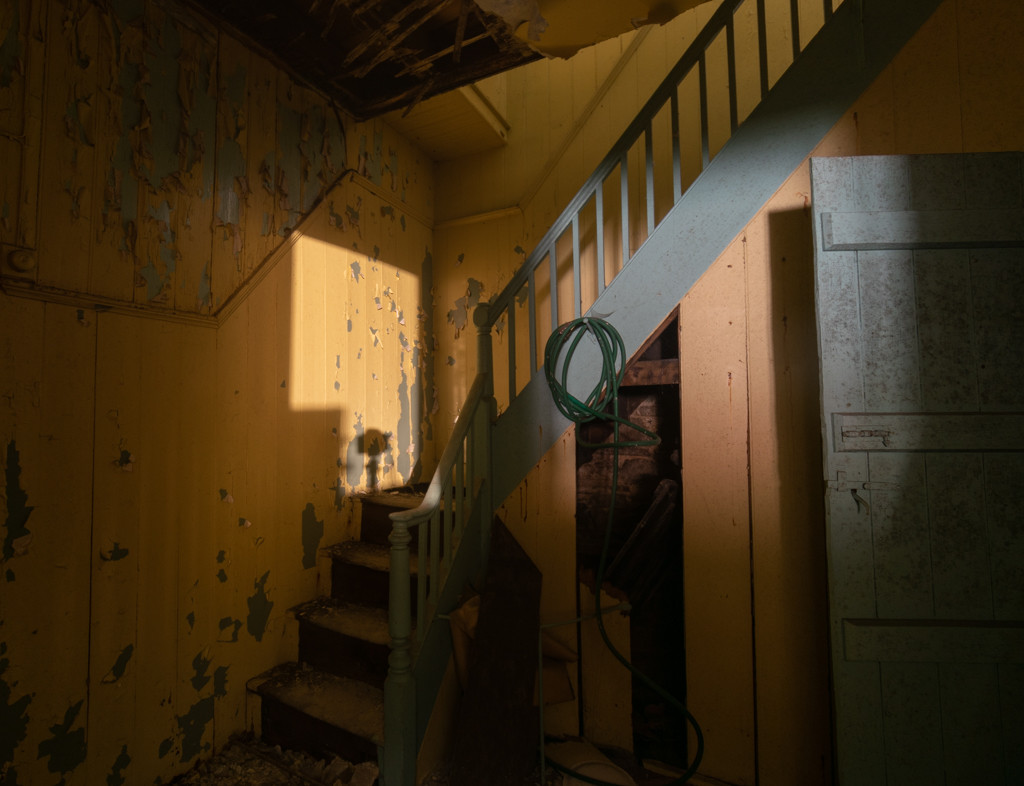 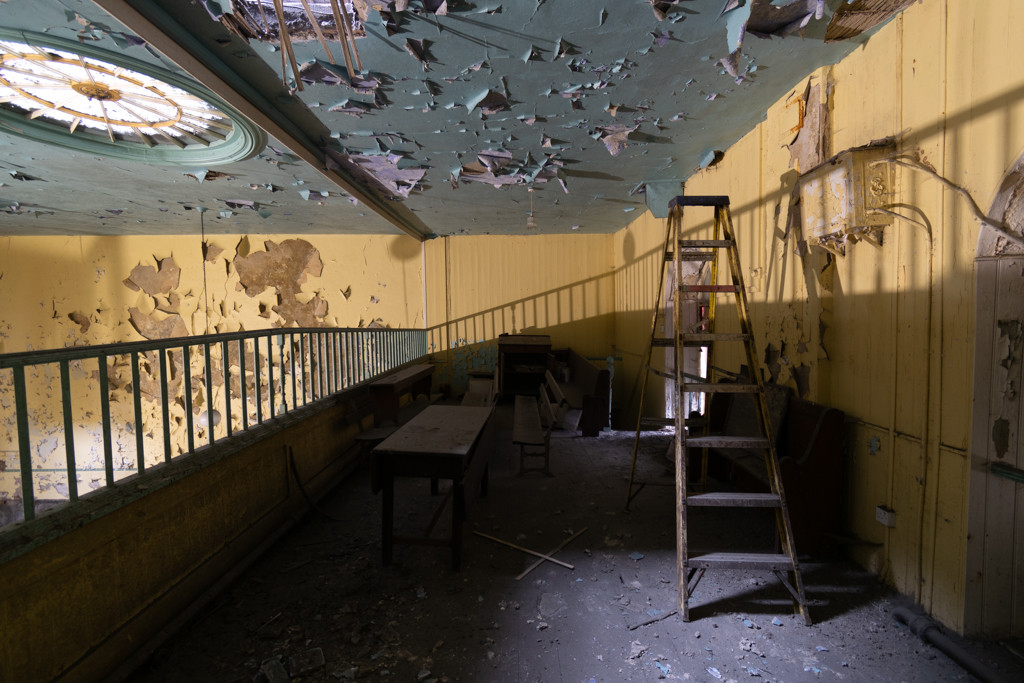 A final overview of the hall. 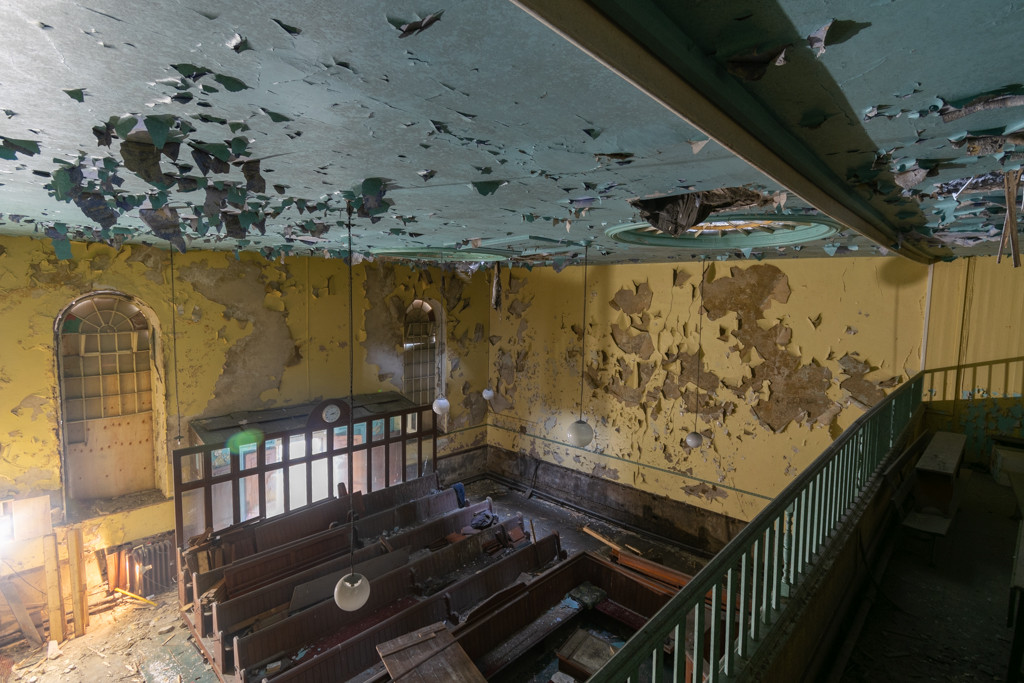 At this point, we left satisfied with what we had seen and captured. The workers said we could return anytime to track its progress over the renovation period.
Two days later and @UrbandonedTeam fancied a visit hoping it wouldn't be too late to see some of the original features.
So we returned to see what work had progressed. Unfortunately for Urbandoned, a lot had changed. 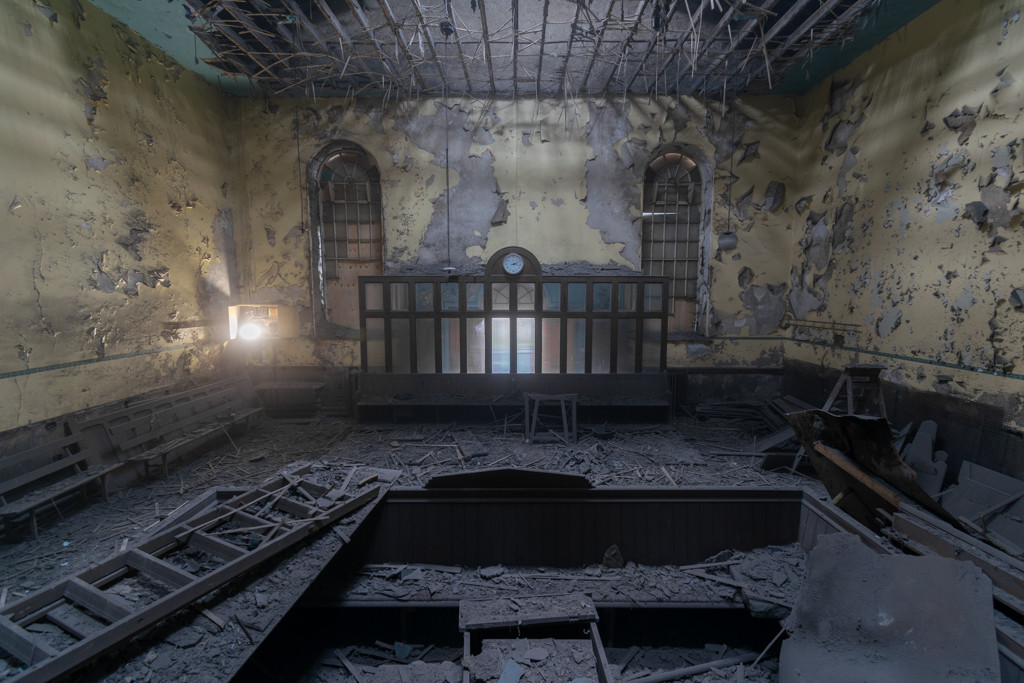 In just two days time, the two workmen had shifted nearly everything out the hall and kicked through the majority of the roof. Most of the globe lights had gone and a thick dust filled the air. The only room that remained the same were the rear storage rooms. 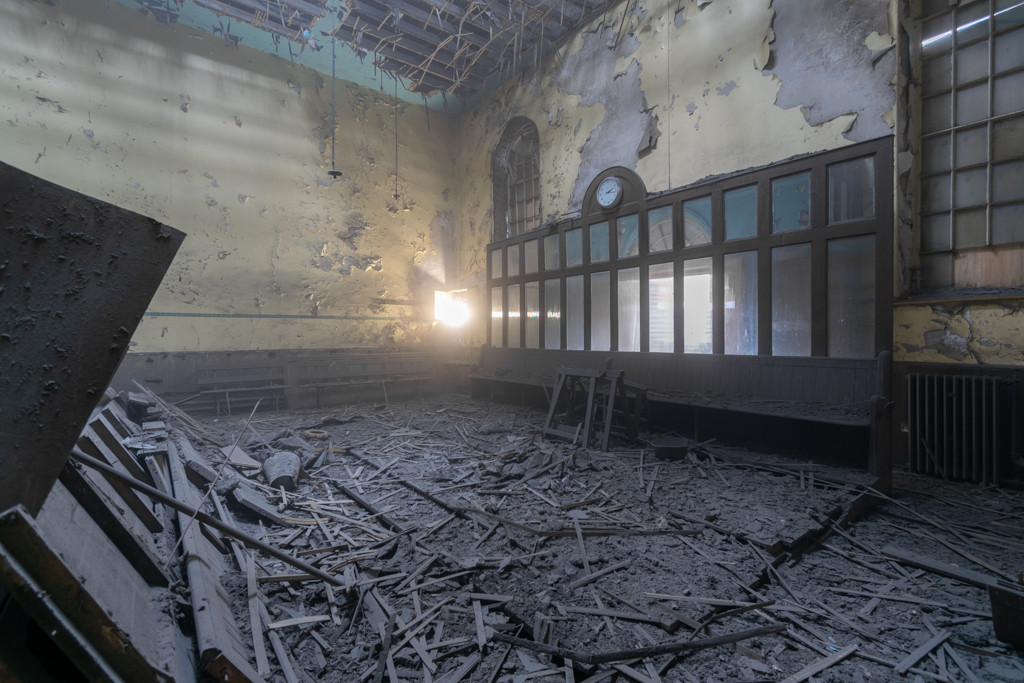 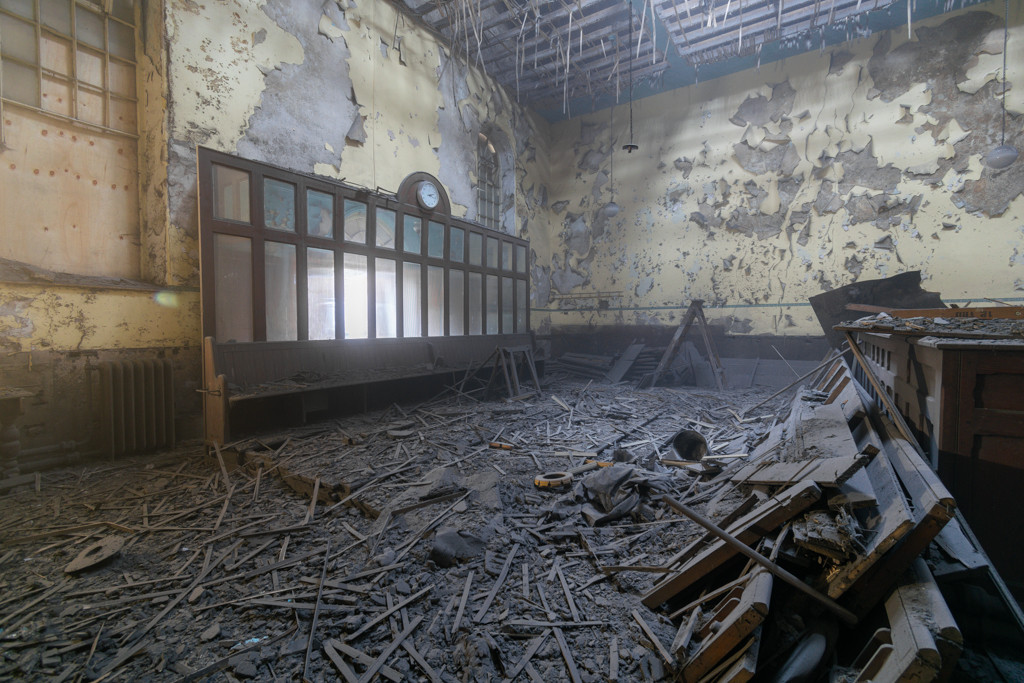 Sadly the glass-work in the ceiling had been kicked out, leaving gaping holes to be replaced. 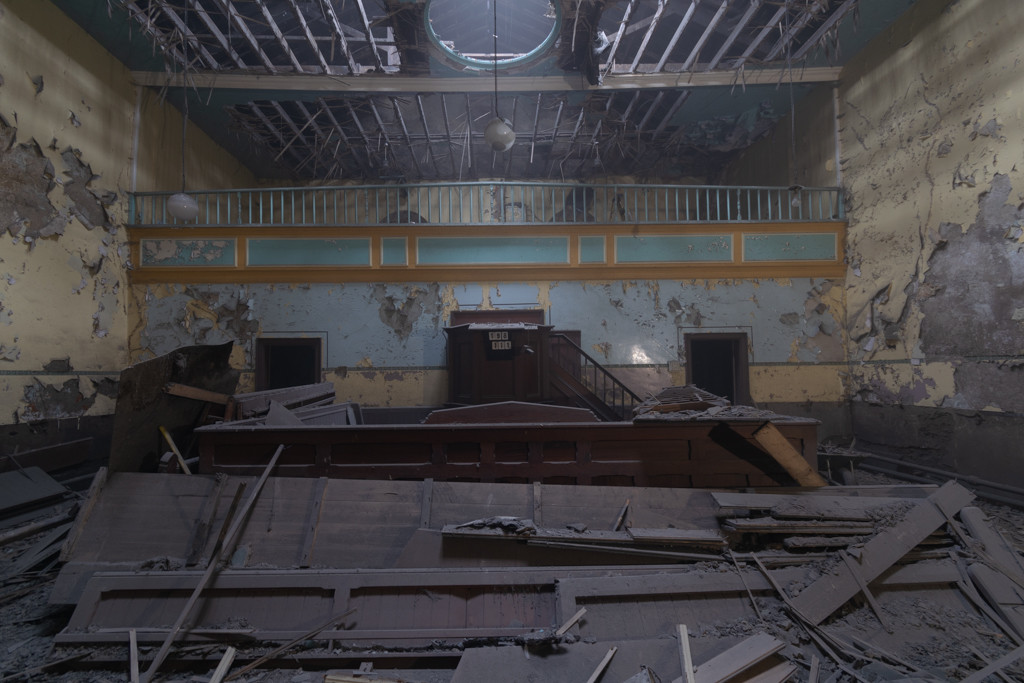 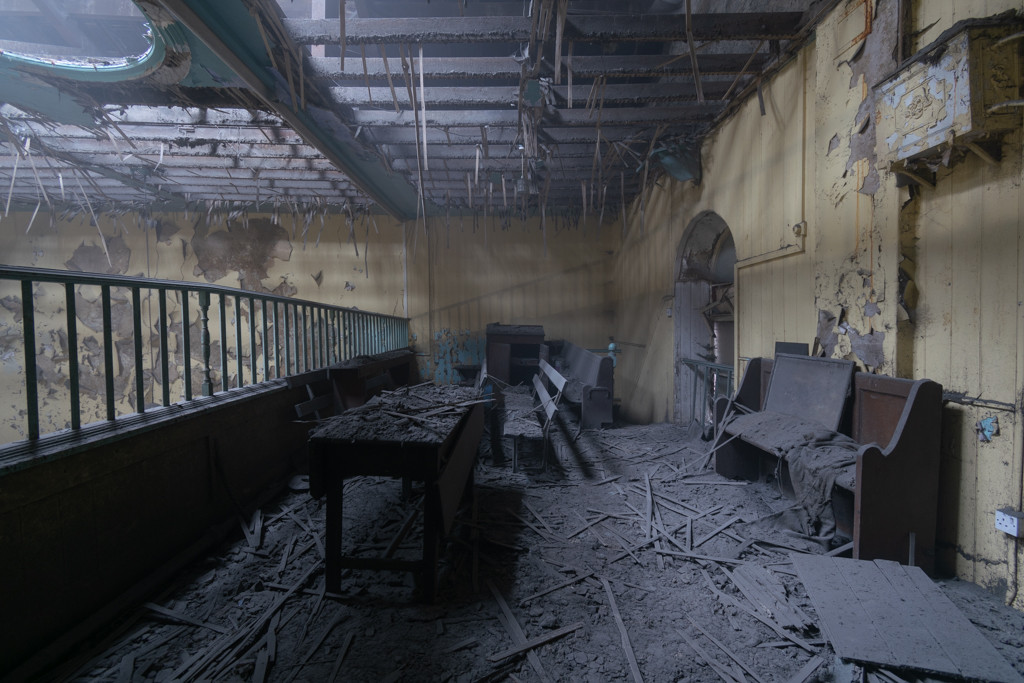 From speaking to the workers, the site is going to be used for apartments, but there isn't anything official online. At this point there will most likely be nothing left to see from the buildings past use as a chapel.

We produced a video combining this site and St Hilda's Church where we cover the comparison between renovation and pure abandonment; feel free to watch below:

Regular User
Wow! That place is fantastic. Timing is everything innit? I had a similar experience with a church while I was in Wales as you'll see in a forthcoming report.

HughieD said:
Wow! That place is fantastic. Timing is everything innit? I had a similar experience with a church while I was in Wales as you'll see in a forthcoming report.
Click to expand...

It truly is. Just one day later and it would have been completely different. Looking forward to your upcoming report