Only a quick report this. It's another one from the archives, but this one was special as it's such an iconic structure. It's pretty much THE thing that people know our city for (along with a big ol' boat). It's the commuter route into Bristol from North Somerset (woop) and further afield for those who are happy to part with one of their finest British pounds for the privilege.

The Clifton Suspension Bridge is a suspension bridge spanning the Avon Gorge and the River Avon, linking Clifton in Bristol to Leigh Woods in North Somerset. Since opening in 1864, it has been a toll bridge, the income from which provides funds for its maintenance. The bridge is built to a design by William Henry Barlow and John Hawkshaw, based on an earlier design by Isambard Kingdom Brunel. It is a grade I listed building and forms part of the B3129 road.
Click to expand...

Work to restore each tower took place a few years back. The Clifton tower in 2015 and the Leigh Woods tower in 2016. A quote from the bridge website regarding the restoration works of this tower, and why the scaffolding was needed:

The two majestic towers which support the Clifton Suspension Bridge are set to undergo important restoration works. The masonry will be cleaned and repointed, and repairs carried out to the roof structure, the drainage and the access ladders.

David Anderson, the Bridge Master, said: “a detailed inspection was carried out several years ago, which revealed that the walls of the towers – and the red sandstone abutments which support them – were in need of repair work. The repairs to the abutments were done between 2010 and 2012, and it has now become a high priority to tackle the towers.

“The most efficient way to go about these works is to erect scaffolding around the towers. This in itself is a major operation, but will provide safe conditions for stone masons to carry out their work, which has to be of the highest quality on this Grade 1 listed structure. It also enables protective sheeting to be installed, to prevent debris and dust causing any danger to people using the bridge or contamination of the Avon Gorge below - a Site of Special Scientific Interest.”

The works are phased so that each tower will be repaired in turn. The Clifton tower will be tackled first – starting in March, and programmed to be complete in October. Works to the Leigh Woods tower will follow on in 2016.

“It is unfortunate that the bridge will not be looking its best during the next two summers due to the scaffolding obscuring one of the towers, however the works must be done during the summer months because warm temperatures are needed for the repointing and painting works” said Mr Anderson.
Click to expand...

I didn't take too many photos here sadly – I was using a borrowed camera and wasn’t very accustomed to using it. In addition to that, it's sort of one of those places where you just go to admire it and take it in, not be permanently clicking away on a camera.

Following a usual, fairly common gathering in the local pub, we headed across to the bridge to see to business. We all agreed we’d been putting this off for far too long, so knew that there was nothing to it but to do it.

As we approached the bridge, we could see the familiar glow of a CCTV monitoring screen in the security office on the Clifton side. We knew that throughout this escapade we would be featuring on at least one of these monitors, but dwelling on that fact doesn’t do the nerves any good whatsoever. Being nearly midnight, there was next to no one around, and cars were a rarity so two people loitering would be sure to attract attention from one of the night guards? Well we’d find out soon. 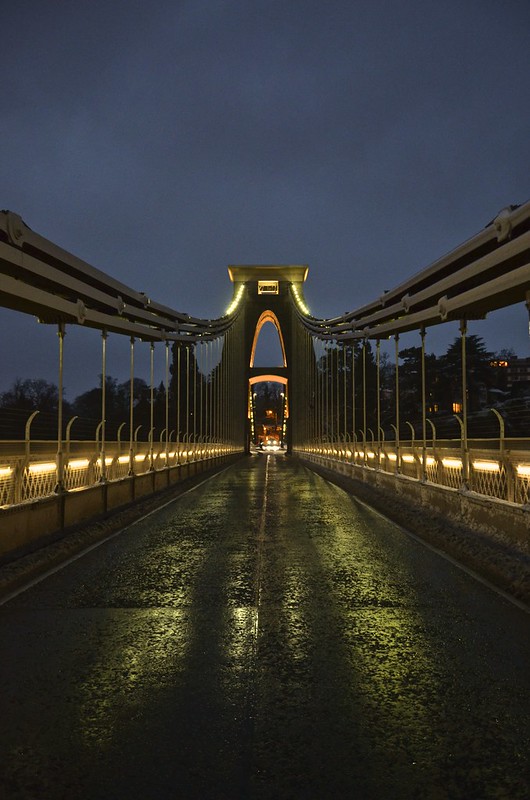 The Clifton Tower - from 2013 during the snowy period 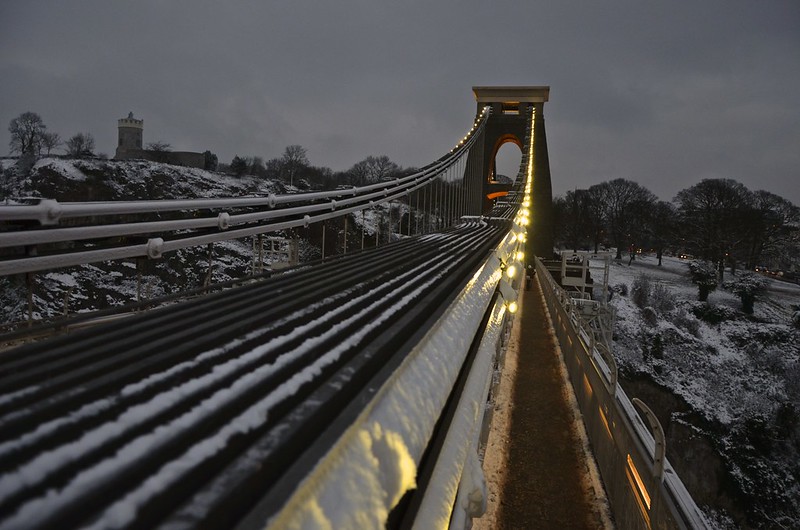 Looking down towards security office 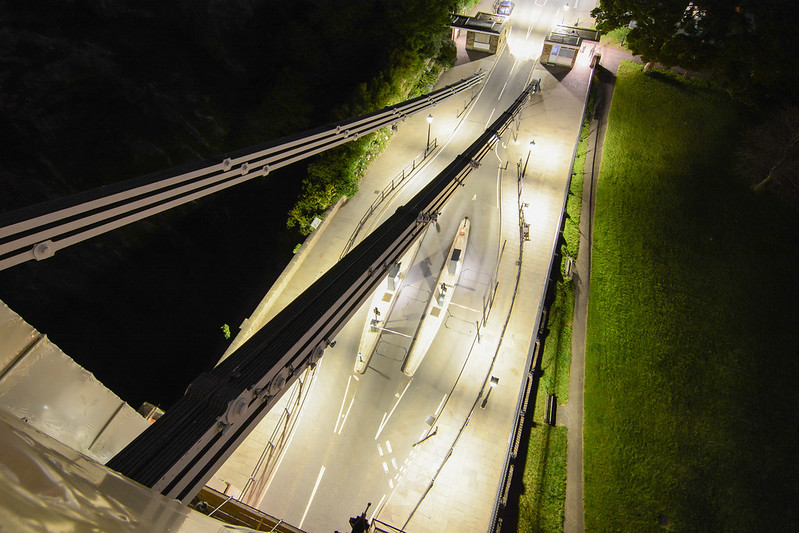 The door to the bottom of the scaffolding had one simple code lock on. Whilst it’s fairly easy to crack these locks, we couldn’t afford to spend minute after minute stood by the door doing so. We tossed a coin, and loser would bolt over the top of the door and open it for the other one. I won (for once), so stood nearby keeping an eye on the hut for movement whilst the deed was done. 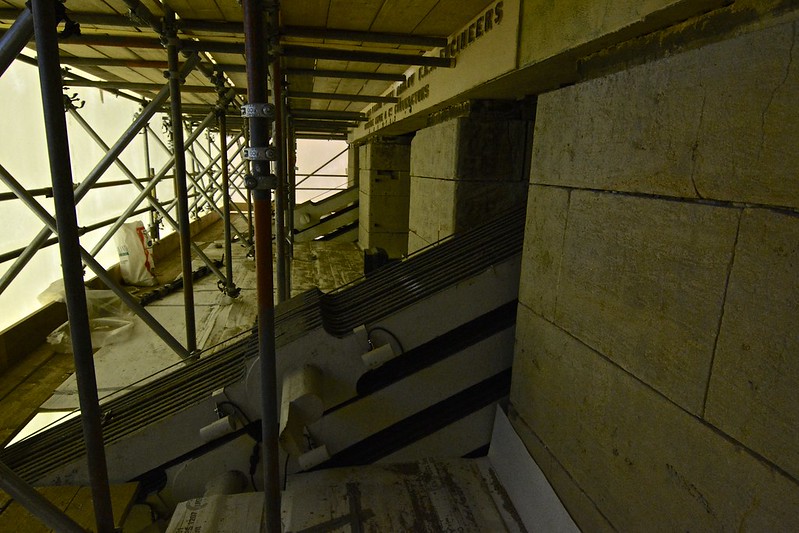 It was all over in a matter of minutes, and before we knew it, we were at the top. Well executed – just how we like it. That being said, it was nigh on impossible to keep quiet once at the top, as there were bits and bobs lying around everywhere, just waiting to be kicked. 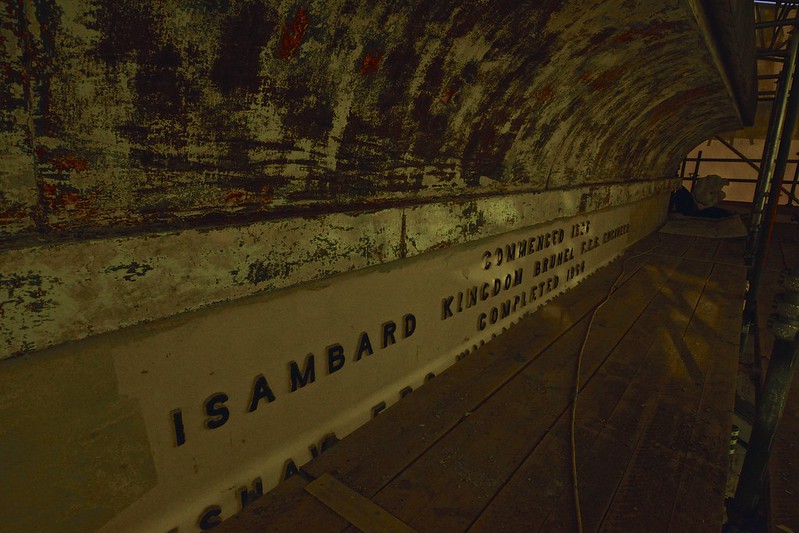 The security guard did come out for a cigarette whilst we were at the top. Luckily we noticed, so were able to get to a more discreet position and observe him as he did so. He looked up a couple of times; was he suspicious? We’ll never know, but after five minutes he was safely back in his office so business could resume. 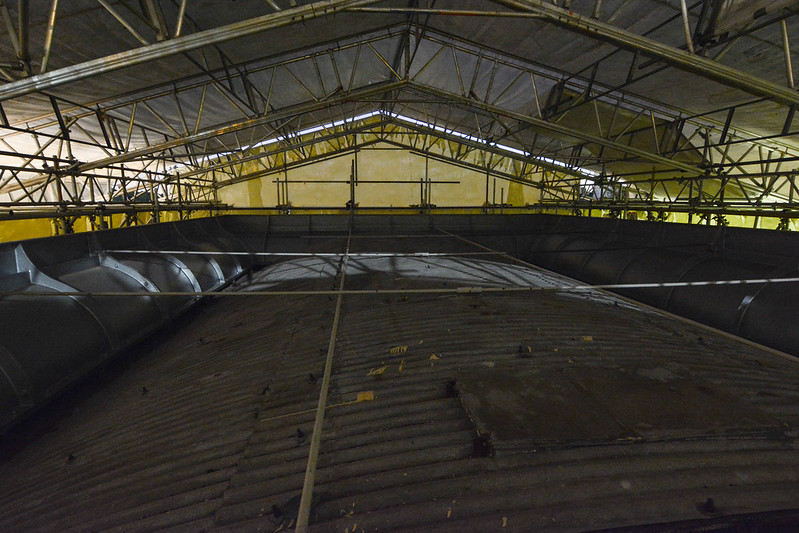 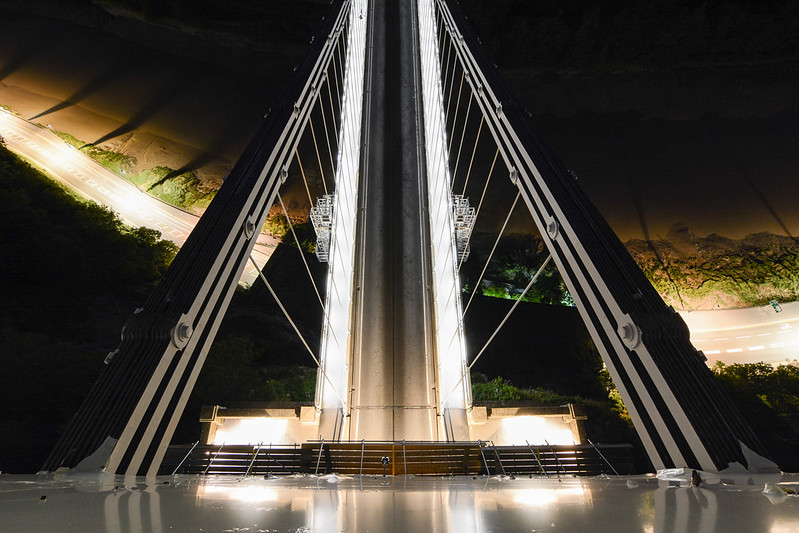 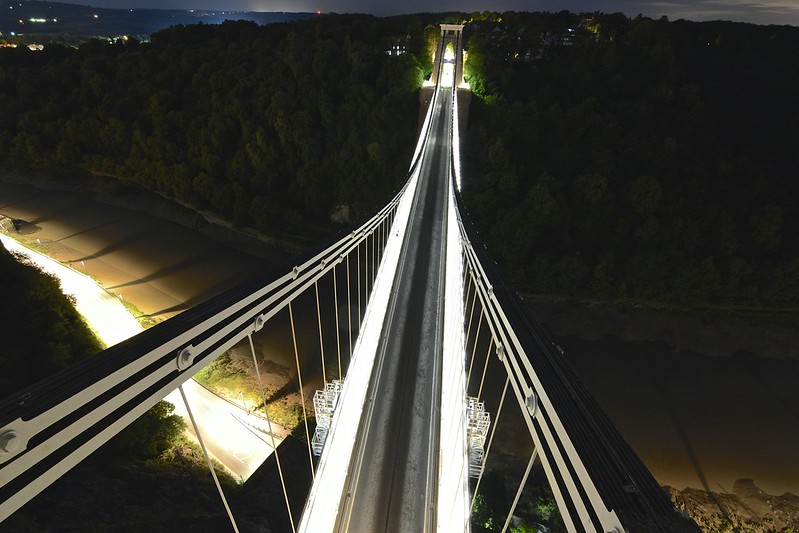 Regular User
That is pretty darn ace. IKB built them to last.

Regular User
It’s a beauty of a bridge and it sounds like you had a good night! Great shots too mate.
eating seeds is a pastime activity.

Staff member
Moderator
Wow, that's impressive, love the views from the top. Looks like you took good advantage of a rare opportunity to do this. Nice detail with the Isambard Kingdom Brunel sign up close too
My Website -> Behind Closed Doors

Regular User
I always love blowing peoples mind when I point out the towers are completely different. Its amazing the things you never notice about them on a daily basis.
Website: www.whateversleft.co.uk - County Asylums: www.countyasylums.co.uk​

tumbles said:
I always love blowing peoples mind when I point out the towers are completely different. Its amazing the things you never notice about them on a daily basis.
Click to expand...

I only first realised this when we did it, so 2015. It's actually quite obvious when you know and look at the bridge - proper interesting though!
Blurred Boundaries - 'busting Bristol wide open' - Louise 2012
SERVE CHILLED, LIKE SOMERSET​

Regular User
Nicely timed. Gotta say that last shot is a cracker. The views looking down are pretty great too.