Regular User
Counters Creek Combined Sewer Overflow
into Hammersmith Storm Relief​
Not a full report on the Counters Creek this one. From what I’ve seen it’s another long drain, though for the most part quite featureless and not exactly dry or easy to traverse along! It does have a lovely overflow chamber about halfway along its length, though, which is one of the nicest ones I’ve seen anywhere. Bit of a bold statement but I’d go as far as to say this is as enjoyable to photograph and ‘study’ as Lucky Charms is across the river. In fact, there’s more going on here than Lucky Charms so it’s probably better! It’s a sod to get to though, well, it is if you don’t have chesties!​
Two notable drain0rz helped me with this one – I didn’t just stumble across it by chance (or go lid lookin’) and I’ve not seen it appear on 28 before. I won’t mention you’s by name, I’m sure you know who you are! Thanks guys​
I’d been in London with the Vicar, looking down various lids but as it had been raining we didn’t get anything done. As I’d got me van I stayed the night in town and decided on a couple of solo missions the following day – the upper Tyburn being one of them, this being the other.​
Having checked my map, I knew my lid was a short distance upstream of the interceptor and overflow so I’d have a bit of wading to do to get to it. Being a combined sewer, this takes sewage and wastewater from houses all the time and rainwater too, when it rains. As it’s just upstream of the Low Level No.2 Interceptor, as well, it’s pretty deep and pretty rank. Now, when I read other people’s account on a drain I generally understand it pretty well but forget some of the finer details until I get there, which makes for a nice surprise. What I did remember, though as I walked downstream waist deep in shite, is that it’d be worth it if I could cross the interceptor.​
As I approached it I realised exactly where I was and that I was gonna have a good time down there! Here’s the Low Level No.2 that you have to cross. The flow is fairly mellow but you can’t see what's underfoot so you have to feel carefully with yer feet. The invert of the Counters meets the invert of the Low Level and its very slippery and stodgy here. And slightly deeper too. Don’t slip now!​
The shiny new metal weir sits directly on top of the old one allowing more flow to continue around the corner than previously. The old penstock winders and gears are still above and I suspect they can still be used to raise or lower the weir​ 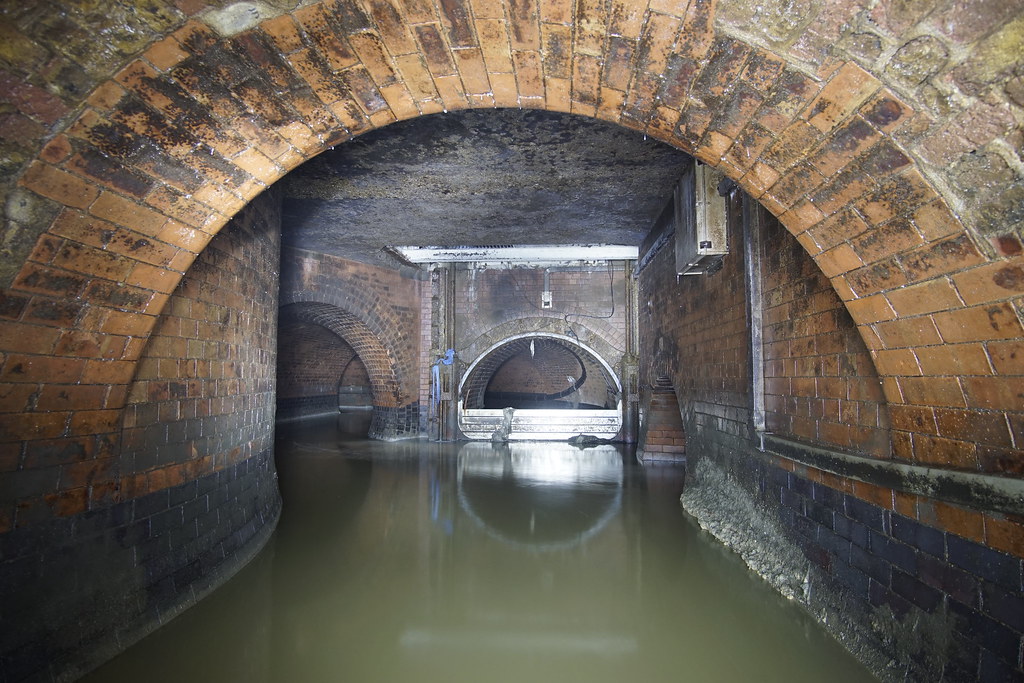 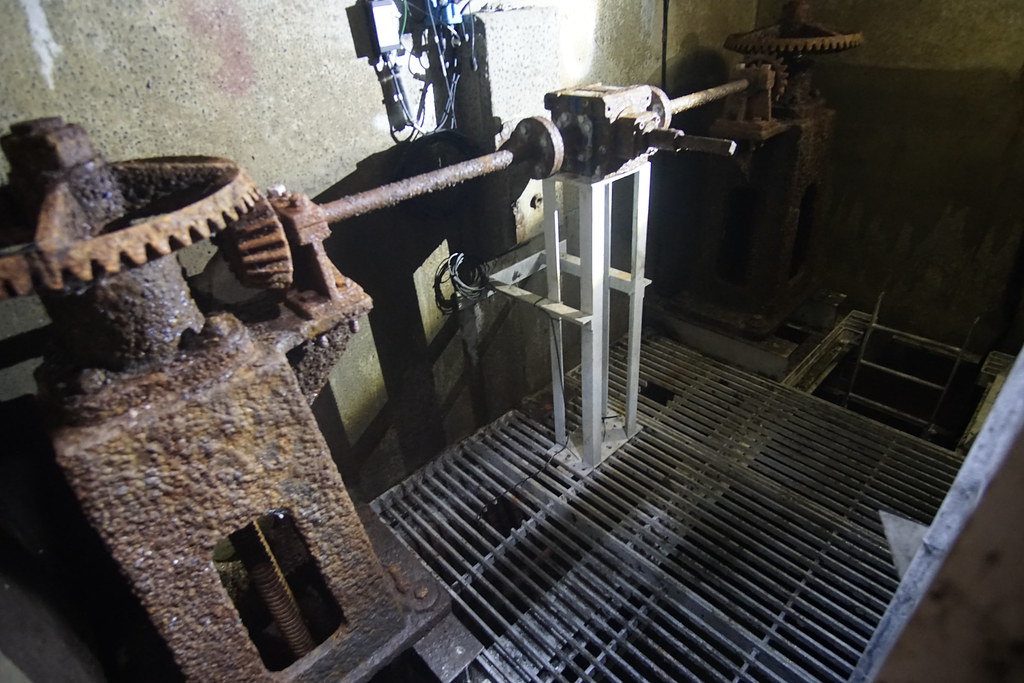 This is looking north back up the Counters Creek Combined Sewer having just crossed the Low Level No.2 Interceptor​ 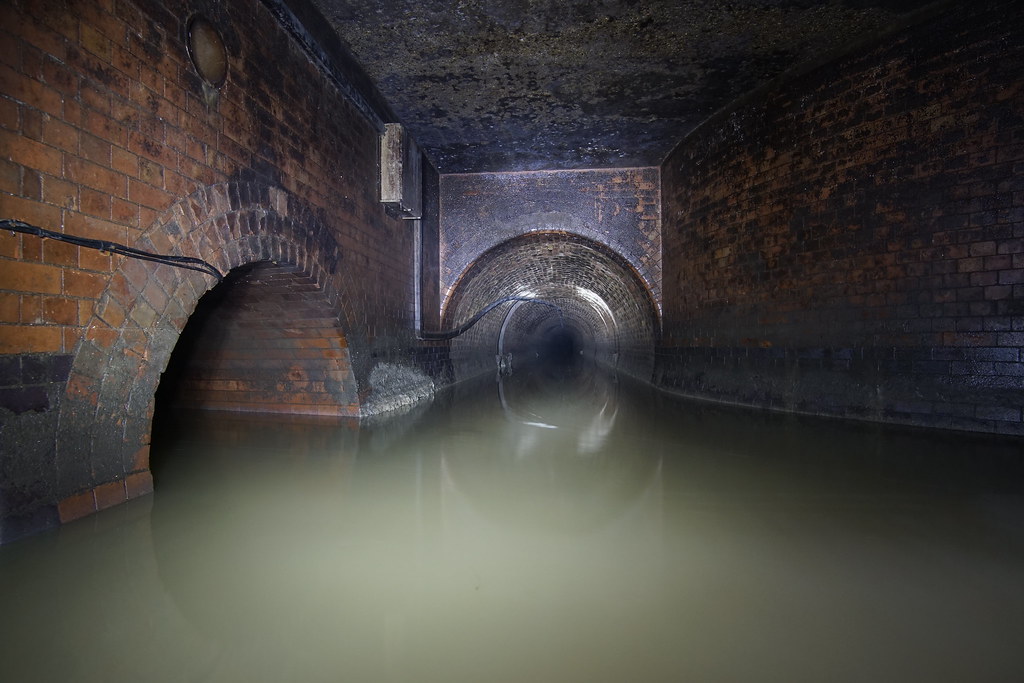 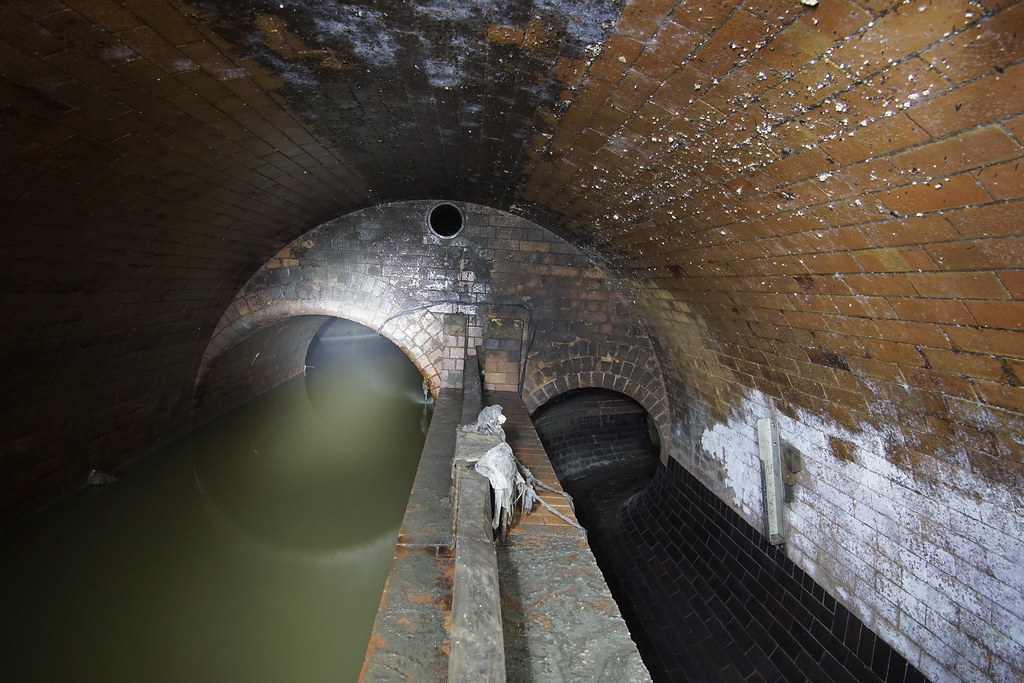 There’s a total of three weirs. The two described above and the long main one partially seen on the right here. The first overflow pipe from the Interceptor (above) enters the main overflow on the left​ 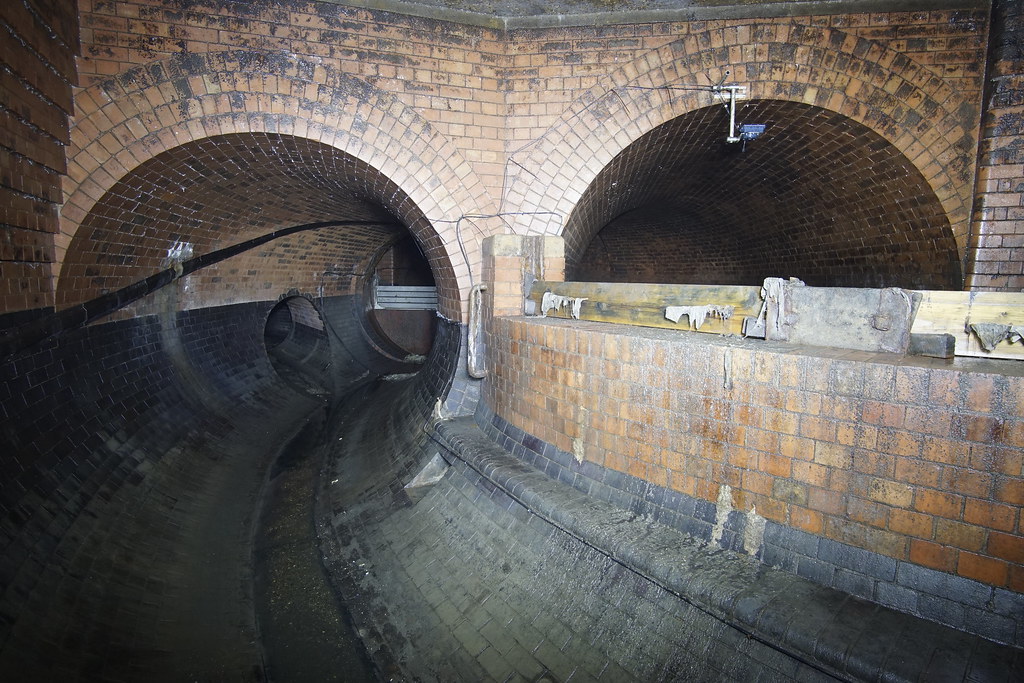 Turning around, the Low Level and normal Counters Creek flows disappear off to the left, the Counters Creek continues down the pipe in the middle, now largely empty and storm flows drop into what is the start of the Hammersmith Storm Relief, through the two small arches on the right, seen from behind in the next pic​ 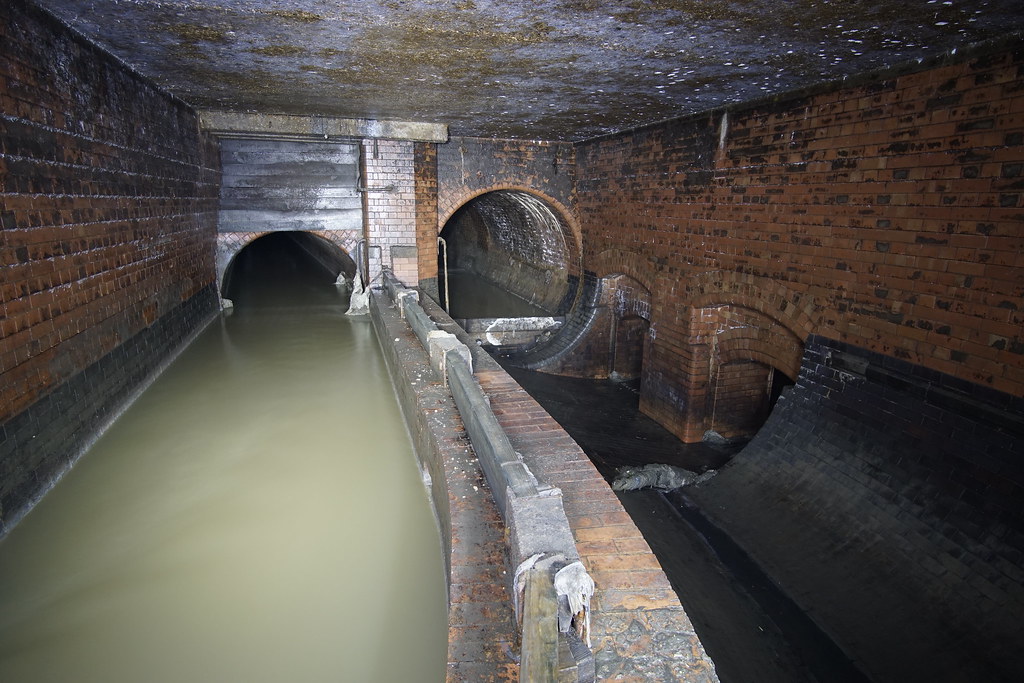 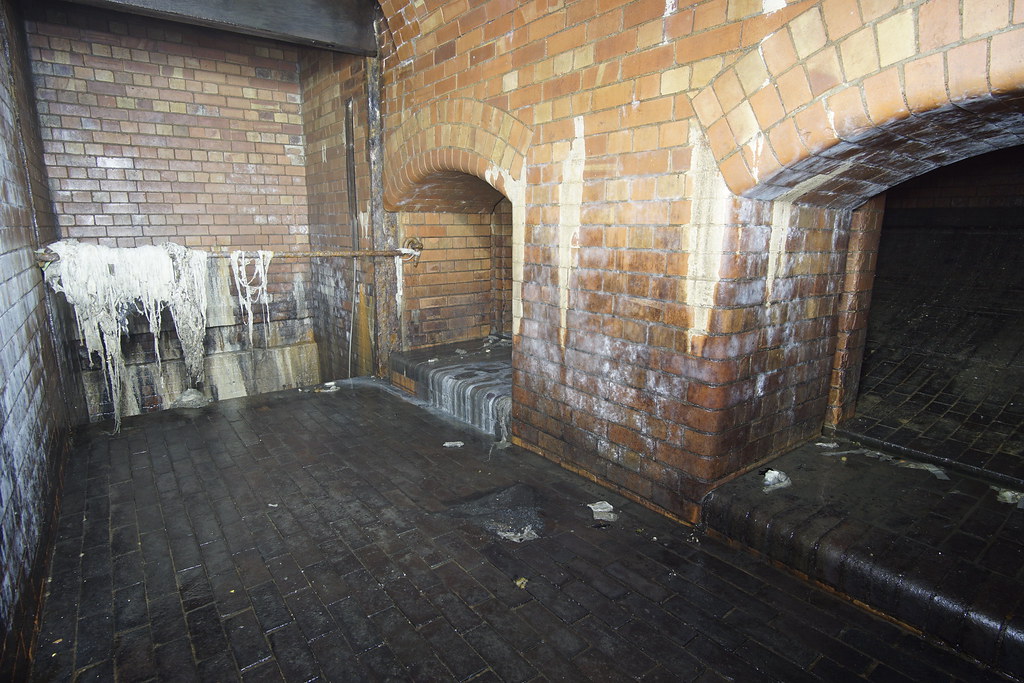 This is the shot I wanted, lookin back upstream at it all. This is about as good and as grand as London chambers get. If only the roof was arched like Lucky Charms. I’ll hopefully return one day, with more people and more torches, to light this thing up properly!​ 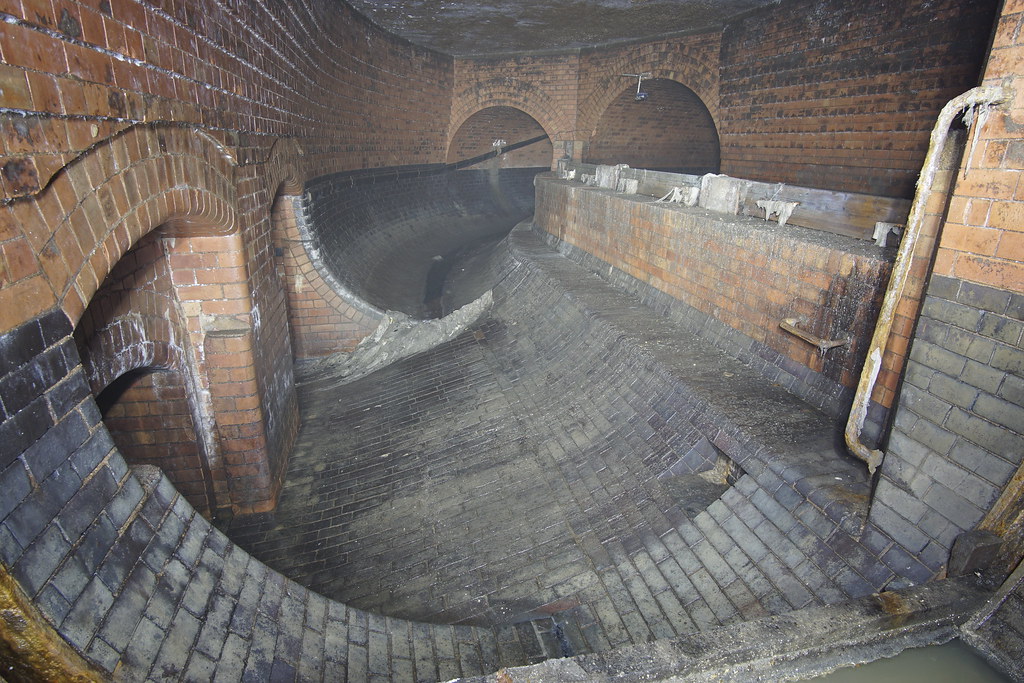 The pic below, taken just slightly further back shows where the newer works joined the older ones. The Counters Creek was originally a river and like many of the lost rivers it became an open sewer and was at least partially culverted before Bazelgette and the Metropolitan Board of Works came along, so pre 1856. The Low Level No.2 and Hammersmith Storm Relief were built by the London County Council (1889-1930) so are considerably newer. You can see the age difference in the type of brick used and the difference is most notable here where old meets new. 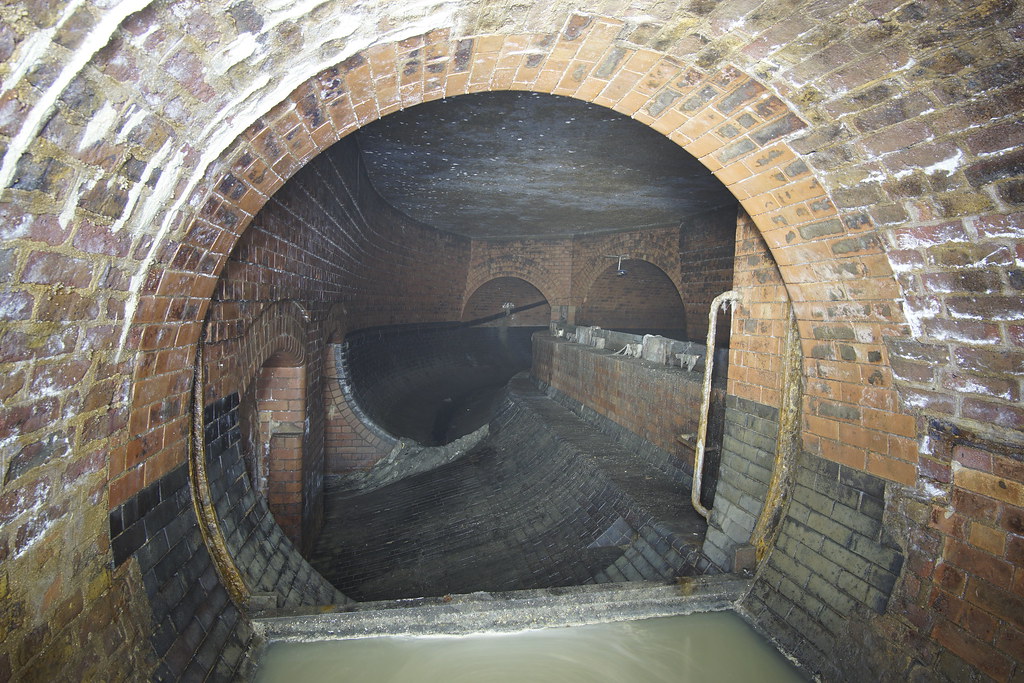 One assumes this chamber was built while the Counters Creek was still live and in use as a combined sewer. I’ve still some work to do to find out which came first, the Low Level no.2 or the Hammersmith Storm Relief but somehow they’d have had to divert normal flows past the area they were building until it was completed. Trying to figure out a construction timeline for what got built, how and when hurts my head but I love it! These things don’t just get built overnight and the weather won’t wait. There’s a lot of combined waste coming through here all the time – you can’t just dam it, it’ll back up and flood somewhere else! What’s obvious looking at the map, though, is that the site was chosen at a kink in the course of the Counters Creek where a change of direction would make an overflow more effective. There’s plans to build a storm relief for the Counter Creek – for those that are interested a link to the PDF is below​
https://www.london.gov.uk/sites/default/files/PAWS/media_id_285815/Counters Creek Consultation Phase 2 comment.pdf

I might complete this report, one day, if/ when I see the rest of the system
In the mean time, though

Regular User
That chamber really is the money shot!

Staff member
Admin
It's grim as fuck that place!

Also we went to the 'consultation evening' for that last lot, I've got some funny GoPro somewhere of me and adders taking the piss!
Ojay@28dayslater.co.uk‏​

Regular User
Great report and lovely shots!
It's only after seeing these photos that I can now finally understand what is happening at this rather complex junction and marvelous piece of civil engineering.

Regular User
Love this TG - the grimmer the betterer...
https://analogparalysis1978.com​