28DL Full Member
So I've had a comment or so on previous reports of excited waffling nonsense I guess i could blame the mild autism or the fact i only write reports when I've had a few to drink and quite honestly when i view reports i scroll past all the jibber jabber straight to the photographs, I cant claim my photos or even my short film i made on site are any good but scroll on see what you think and just think .... its an hours hike up a steep gradient roadway some rich mine owner had built so he could drive his car upto the adit in the 1920's he also had a small hydro plant build to make it one of the first if only working slate mines to be electrically lit.

Our visit was on foot with no rope kit or boat so this report is based on what you can see with your feet on firm ground, if you know the mine you will know theres more to see if you have SRT (single rope technique) or can be bothered to carry an inflatable boat up. Looking into the chamber that requires an abseil you can observe large blocks the size or double decker buses that have fallen from the ceiling.

Every now and then i shoot a clip or so on my phone and along with some stills from the SLR i make a youtube video No talking no clickbait just a few clips and slides stuck together to help create a bit more of a three dimensional feel for the mine. Just scroll past for regular pic dump... 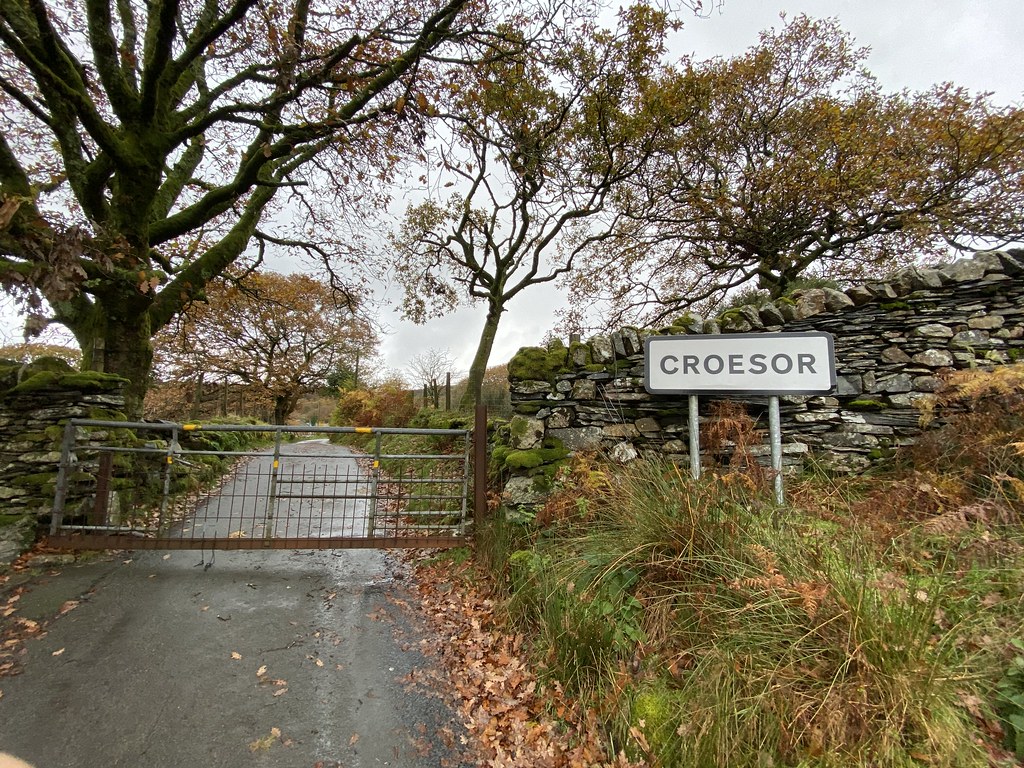 
Croesor Quarry is a large underground slate mine in north Wales which was served by Croesor Tramway. Small scale quarrying began in the 1840s, and by 1861, there were two companies in operation. They amalgamated in 1865, a year after the quarry was connected to the newly opened Croesor Tramway. Much money was invested in development work, but volumes of useful slate produced were small, amounting to just 226 tons in 1868. Access to the underground workings was by a single adit, and the surface mill was powered by two water wheels. A change of ownership in 1875 did little to improve the profitability of the quarry, and it closed in 1878 or 1882.

In 1895, the quarry reopened under the direction of Moses Kellow, a fearless innovator who set about modernising working practices and methods. The two-man teams working in the mill were no longer tied to a two-man team working underground, which enabled the mill to operate more efficiently. Following trials with air drills, he decided instead to electrify the mill, building a large hydro-electric station, which generated three-phase alternating current, rather than the direct current recommended by British manufacturers. He obtained motors from Prague, which were used to drive winches and an electric locomotive, the first to work in Wales. The water wheels were supplemented by Pelton wheels, supplied by Gilbert Gilkes of Kendal. His greatest innovation was the Kellow drill, a hydraulic drill for which he obtained six patents between 1898 and 1915. It could drill a 7.5-foot (2.3 m) hole in the slate in under two minutes, much less than the day required using hand drills. The mine was ventilated by a Guibal fan, housed in a fan-house near the entrance to the adit. Peak output under Kellow's direction was between 5,000 and 6,000 tons per year, though it declined in the later years, until the quarry closed in 1930.

The chambers were used by Cookes Explosives to store propellants from the late 1940s until the early 1970s. This ceased when the Central Electricity Generating Board became aware of it, and feared that an underground explosion would damage the dams of the Ffestiniog pumped storage power station. Both lakes were drained until the explosives had been removed. The quarry was worked on seven levels, but the three below the adit level are now flooded. There was an underground link to the nearby Rhosydd Quarry, and the Croesor Rhosydd Through Trip is a well known, if somewhat dangerous, route for mine explorers.
Click to expand... 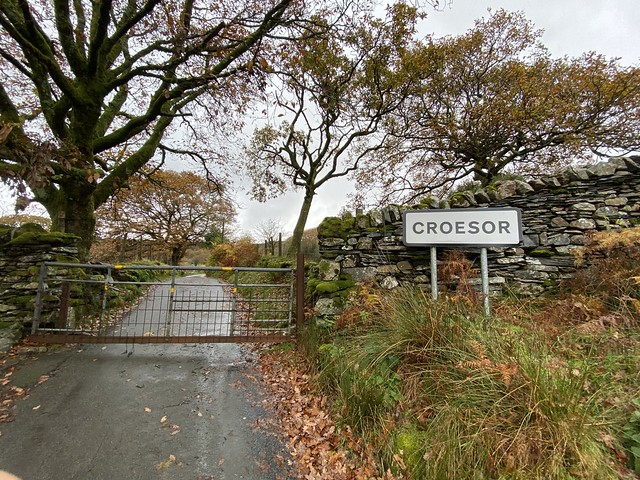 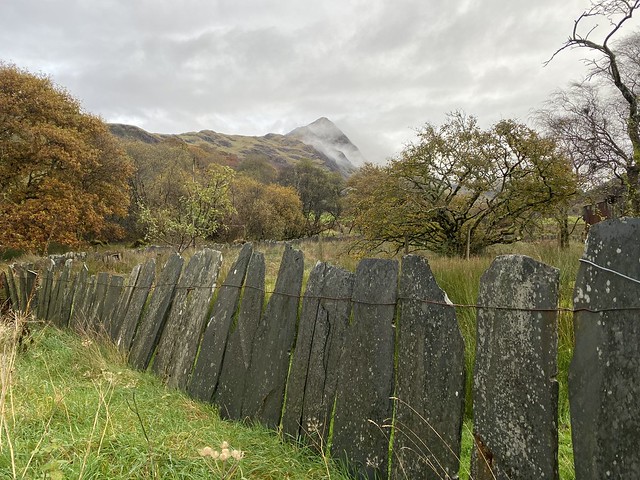 central to the village is a Snowdonia national park official parking area a thunder box (porta loo) and a well marked path, the fence line is literal slabs of slate with a view of THE WELSH EIGER 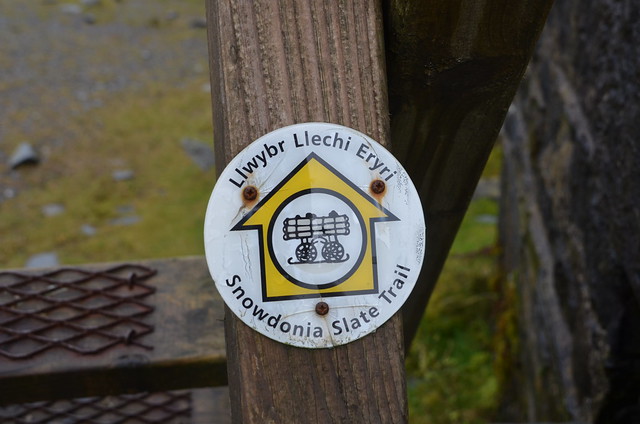 a footpath crosses the surface features 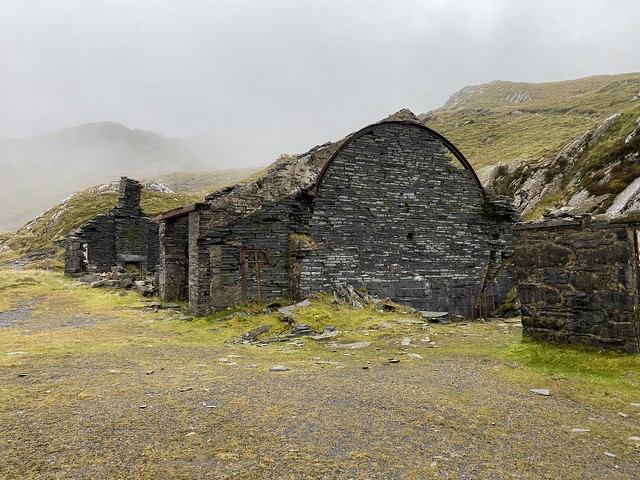 the fan house is hard to miss. the large circle would once have been the inner wall to a big drum fan providing positive ventilation to the mine 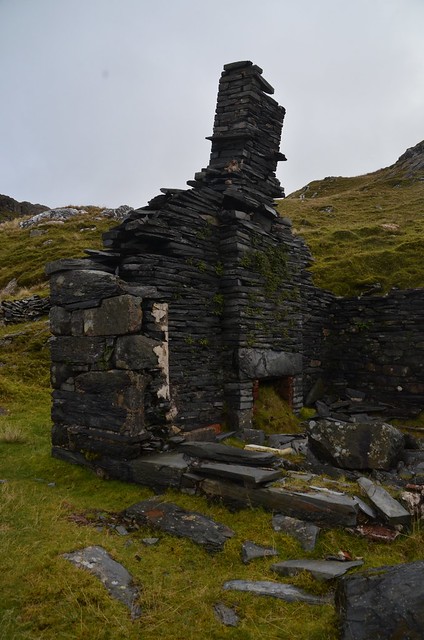 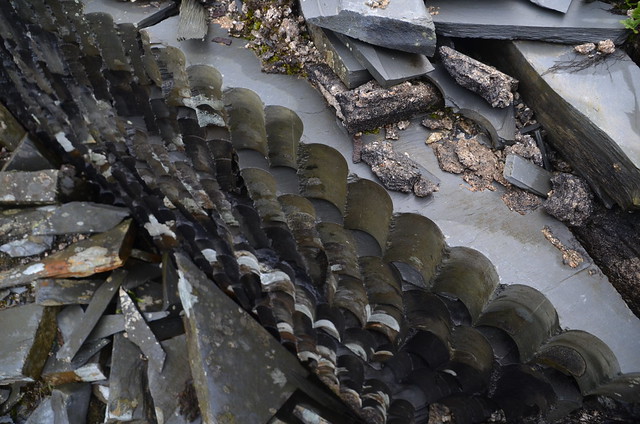 one of the surface buildings made from drilled rock 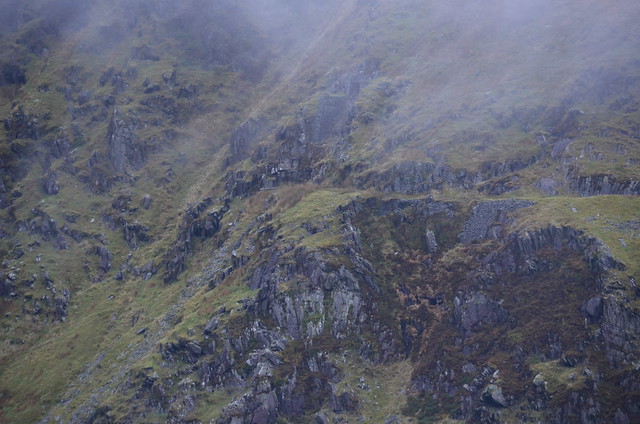 Looking across the valley to the Rhosydd Incline

A day before my 31st birthday and i get a reminder of how un fit i am, The walk (mountain climb) to Cwmorthin Lake level is a killer and then it goes up even more to Rhosydd. We made the most of the sunny weather seeing surface features while we had daylight then ventured into the adit and... 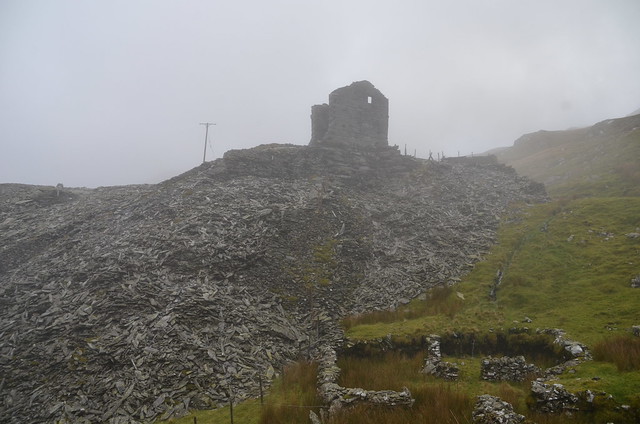 we got lucky with the weather so far but it was turning,the inline drum was disappearing into the clouds and the valley floor was no longer visable 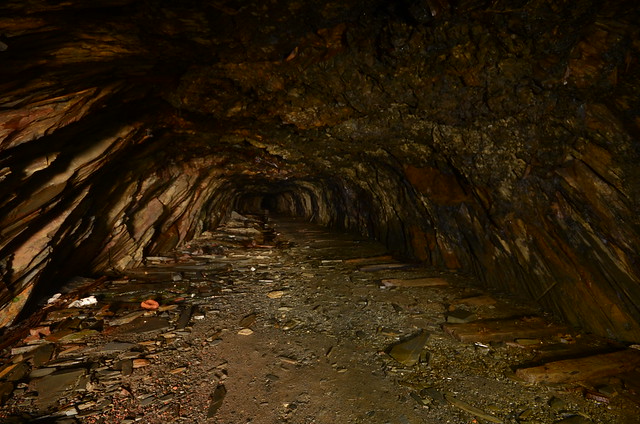 looking in the adit it seemed to be a double tramway 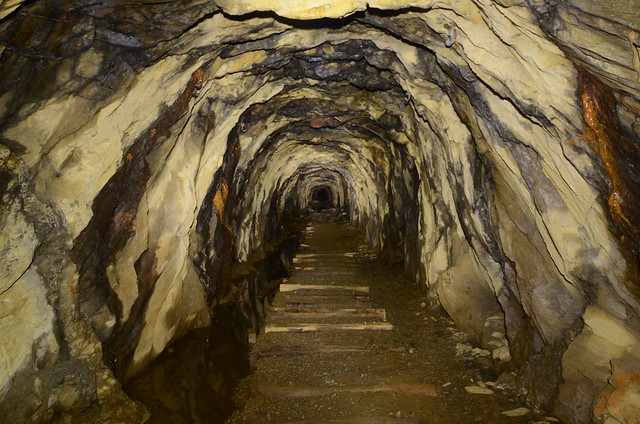 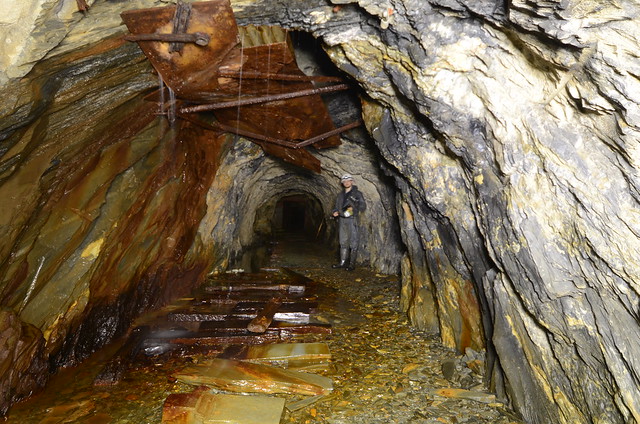 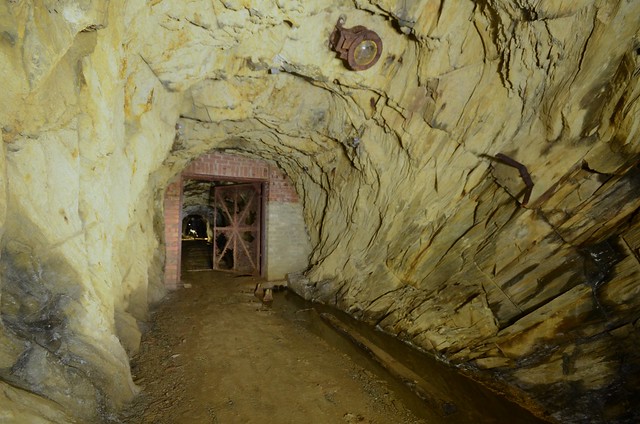 there is explosion proof lighting throughout this lever we figured this was a later addition when the mine was used as explosives storage. If you look around you can find some of the earlier 1920's lighting filaments 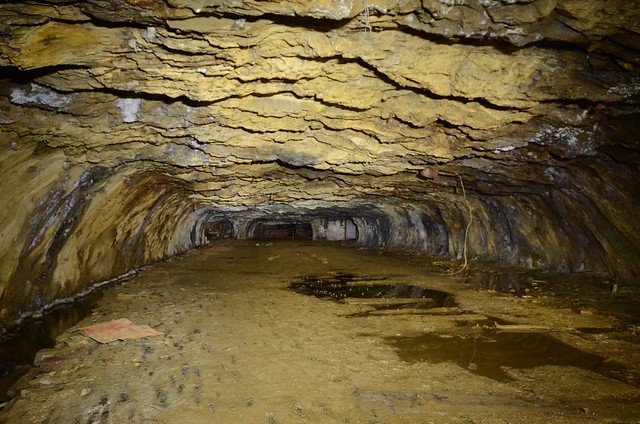 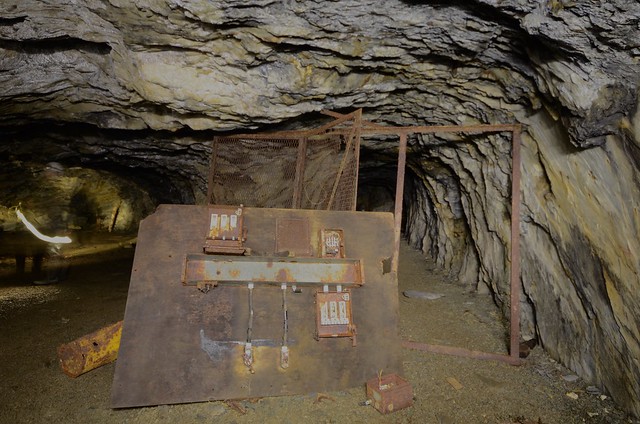 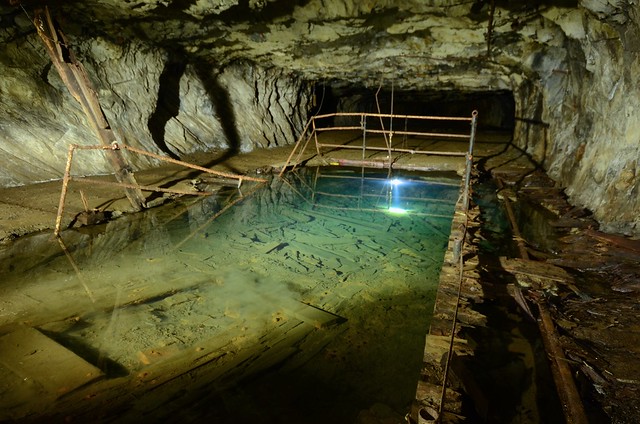 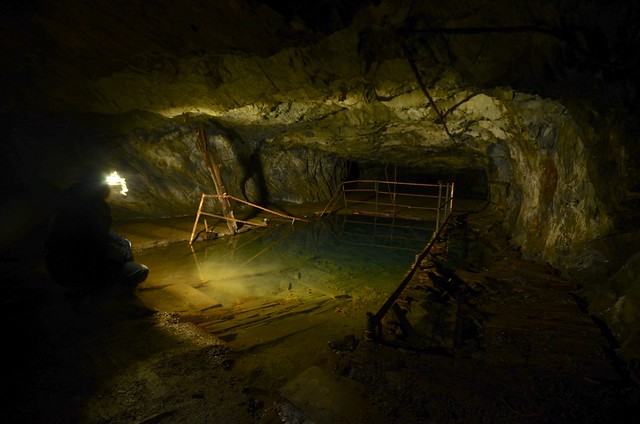 double track incline leads deeper into the flooded sections of the mine, the lower levels can be reached by cave divers and theres plenty of videos on youtube 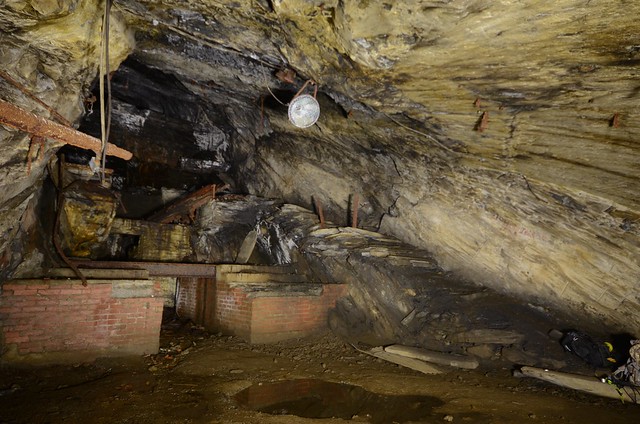 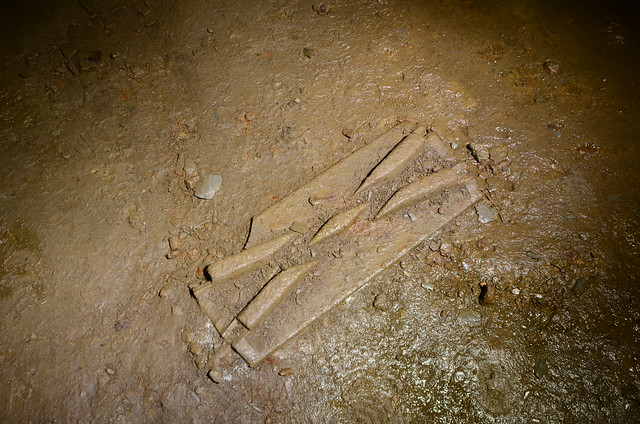 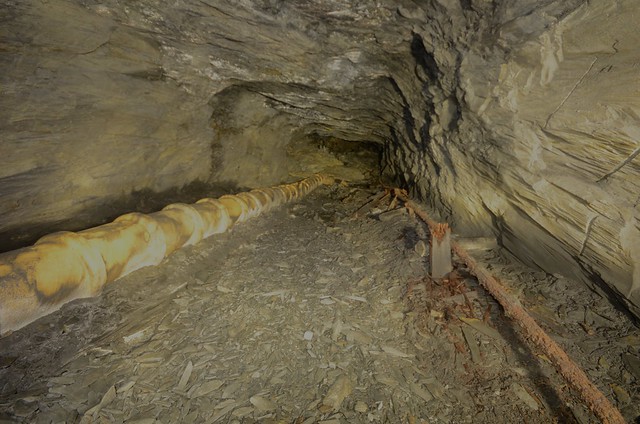 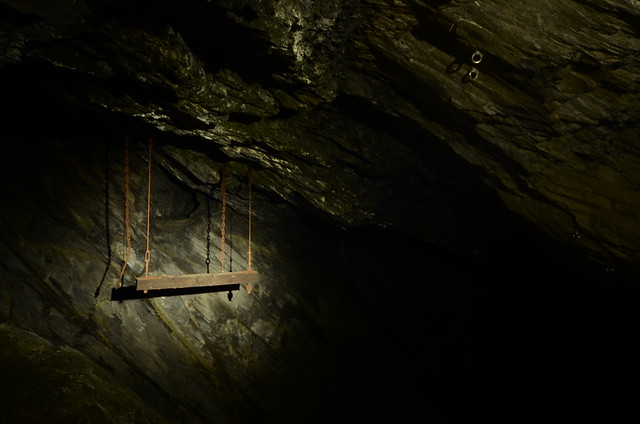 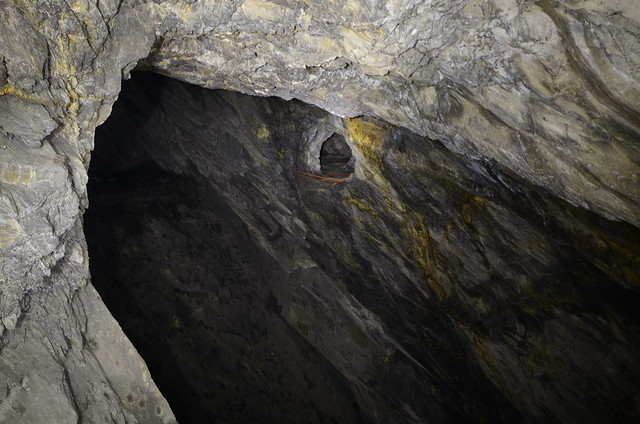 looking across chambers, there is literally no way of telling the scale in these pictures 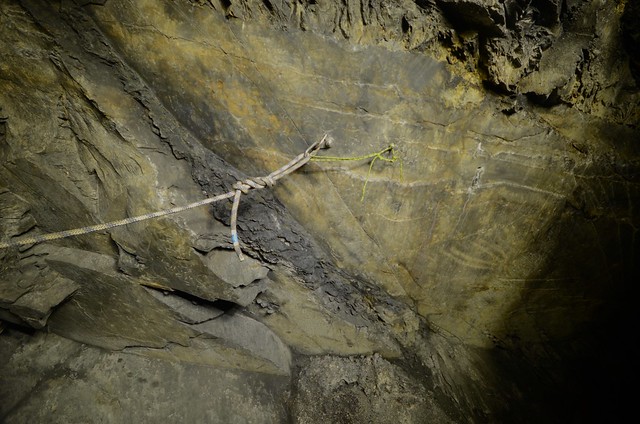 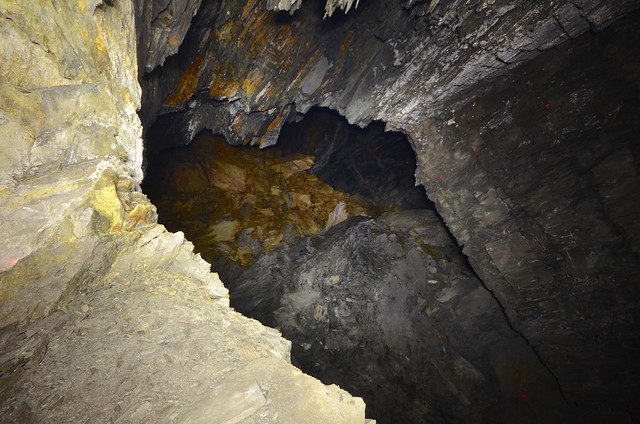 If you so have SRT skillZ you could intrust your life upon this rope with its safety paracord, looking across the chamber you would depend too you have to imagine those chunks of stone are double decker bus sized pieces that have fallen from the roof 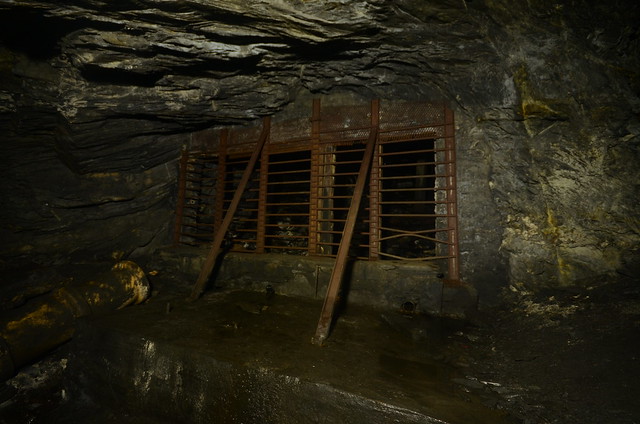 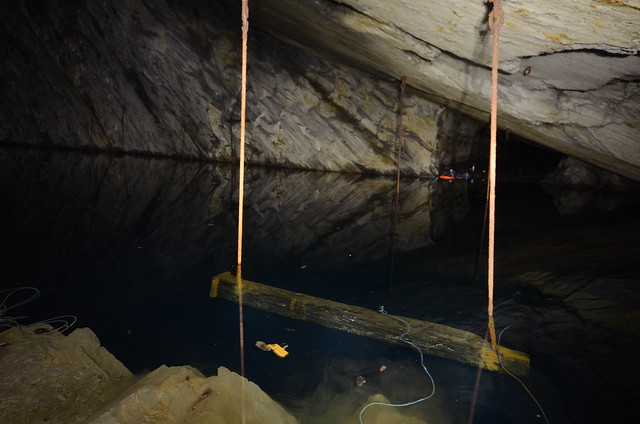 moving back down to the main lever this is looking across a flooded chamber, it can be crossed by boat to other flooded chambers
https://www.flickr.com/photos/mr_sam/sets

28DL Full Member
Cnicht is the Welsh Matterhorn you tit