28DL Full Member
I first stumbled across this place year ago when flitting about Google Earth looking for things; at the time it was being used as a car storage yard by a farm and I ignored it. Fast forward a number of years andI found it it is up for redevelopment, so having a day to myself I decided to head over and have a poke about. Not a lot to see in all honesty, as everything is stripped an empty.

A short history (stolen from here):

Equipment Ammunition Depot Magazine No. 116 had been established as part of a nationwide defence initiative at the outset of preparations for WW2, where the storage of weapons for a large number of mobile gun sites and associated equipment was necessary. When war was declared, the national requirement for these stores amounted to one hundred and eight buildings, the largest of which would include Command Ammunition Depots (CAD) such as that at Bramley near Basingstoke. The support infrastructure for these depots included nine Intermediate Ammunition Depots (IAD) and thirty-four Equipment Ammunition Magazines (EAM), which comprised the smallest, most numerous type of depot in the system. Once operational, ammunition was distributed to these smaller units via the CADs and transported via rail or road by the Royal Army Service Corps, also trained as Ammunition Examiners. These troops would monitor ammunition in the depots for deterioration. Typically, such monitoring would consider a sample batch of 5%; should faults be identified, all batches were subject to inspection.

The site at Banstead represented one of the thirty-four EAMs and was one of three depots constructed between 1938 and 1939 to store and supply ammunition for anti-aircraft batteries surrounding and defending London. A depot at Mill Hill supplied North London, a site at Sevenoaks supplied East London and the Thames Estuary, whilst Banstead supplied the southwest London sector from Dulwich to Raynes Park. In addition to its usual catchment, in 1940 the Banstead depot was briefly tasked with supplying the southeast. Locally, the War Department’s 1937 purchase of farmland attached to Banstead Place formed a part of wider defence proposals in Banstead. By September 1939, the Banstead Urban District Council had set up an Air Raid Precaution Committee in line with nationwide civil defence measures. Trenches were dug in the Lady Neville Recreation Ground and by 26th August 1939, council telephone wires were under constant monitoring in anticipation of government instruction. Traffic lights were masked and warden posts established.

The site’s construction was overseen by the Royal Army Ordnance Corps and its principal function was to store shells for 3.7” and 4.5” aircraft guns and rockets, with a maximum capacity of 960 tons of ammunition. The depot was fully stocked by mid-August 1939 and its first distribution effected in September 1939, four days before the declaration of war. Between March 1939 to August 1955, the foreman in charge there was a Mr. Trusler, a civilian previously employed at the Bramley CAD. His role was supported by local employees comprising eight civilian staff and four night watchmen, all of whom began service in March 1939. Following the declaration of war, the site was first defended by a detachment from the Honourable Artillery Company, and then by detachments of the East Surrey Regiment and Royal Pioneer Corps. The Honourable Artillery Company were accommodated in tents during their early billeting, but as operations increased, these were replaced by wooden huts with sanitary and cooking facilities, establishing the site more firmly. The Pioneer Corps were to become responsible for both guarding the depot and ensuring the site’s daily operation. By the war’s end, the site was occupied by No. 28 Group and No. 80 (Indian) Company, then based in Wimbledon. Both were withdrawn in August 1945, after which time, no troops were engaged at the site. This was formally closed as an active storage and distribution centre in 1953. The wooden huts were utilised as temporary housing for returning servicemen until 1955 however, due to the general shortage in housing.

The site was sold off as surplus in 1966, since then it has been used as a farm yard and storage yard; the earth berms were removed at some point since the sale. 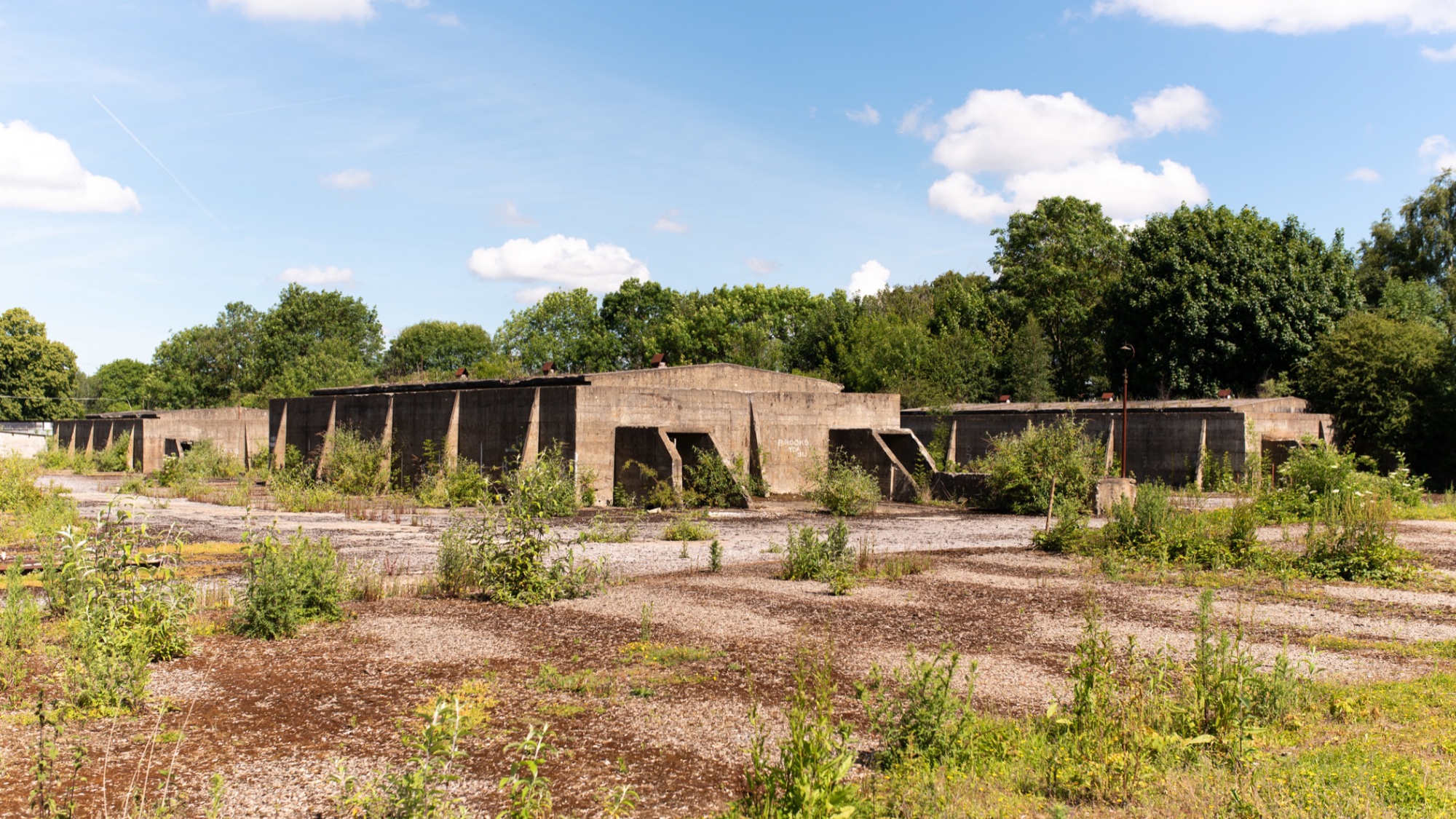 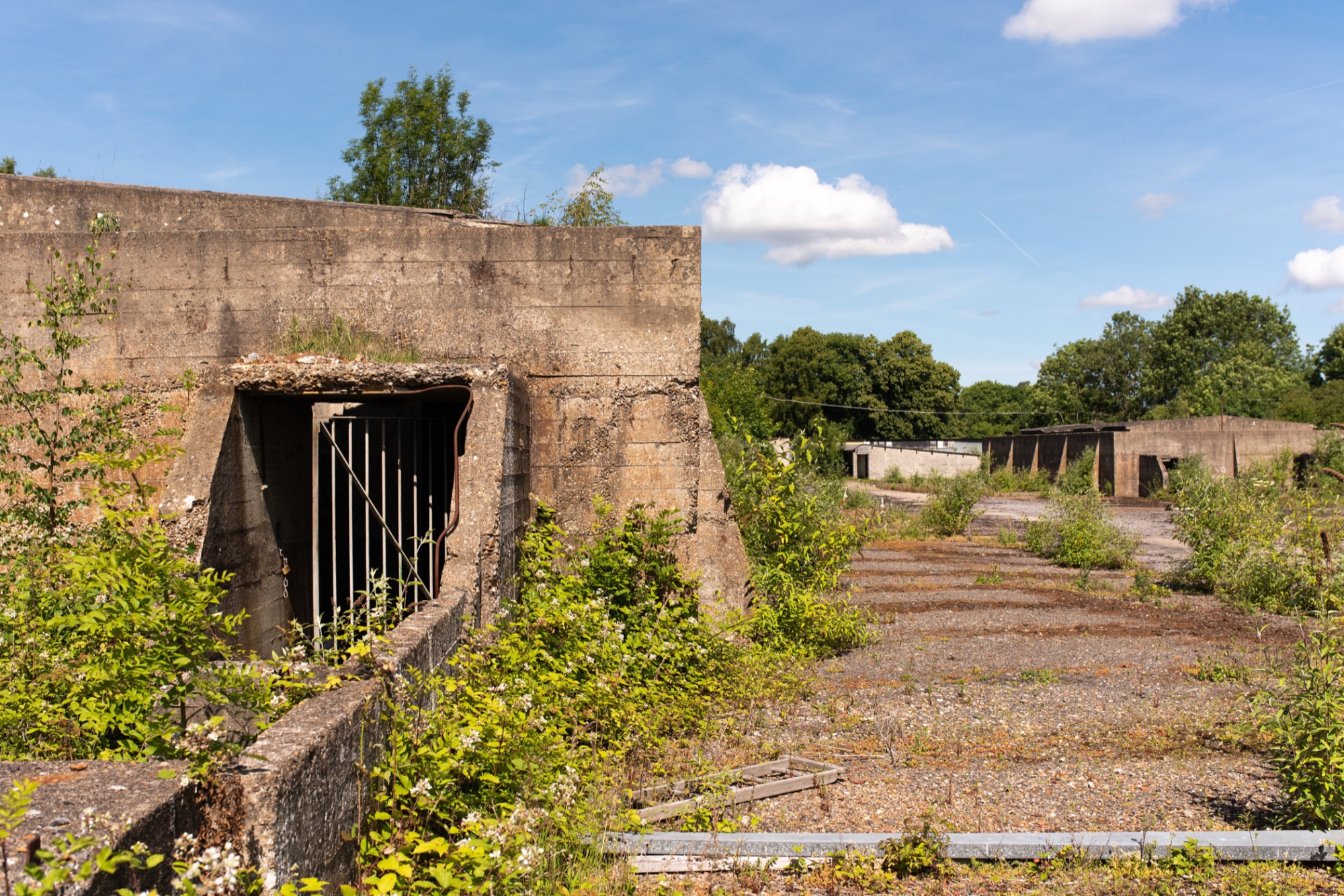 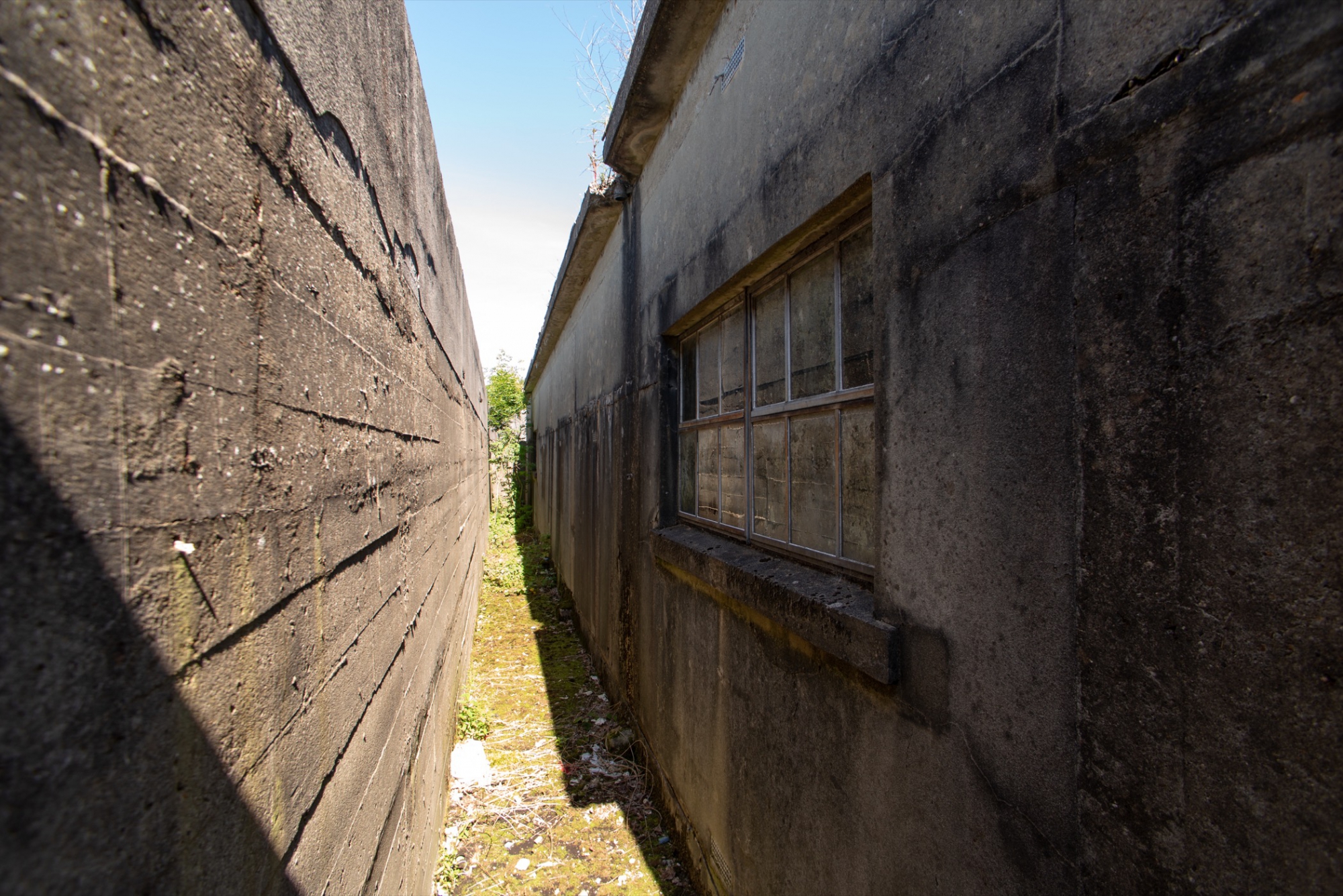 You can understand why a farm wanted the land, the ammo pens make for great animal pens lol 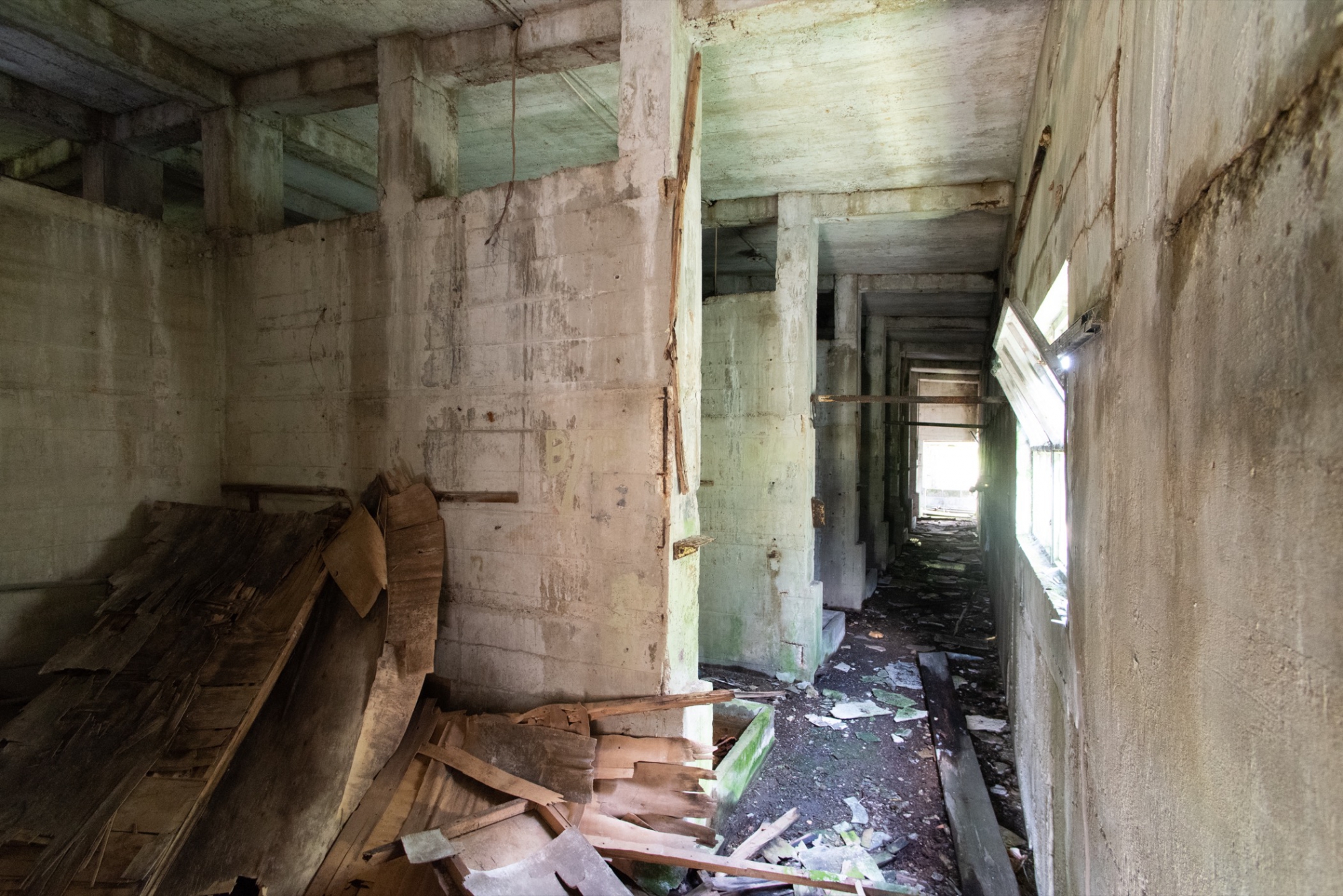 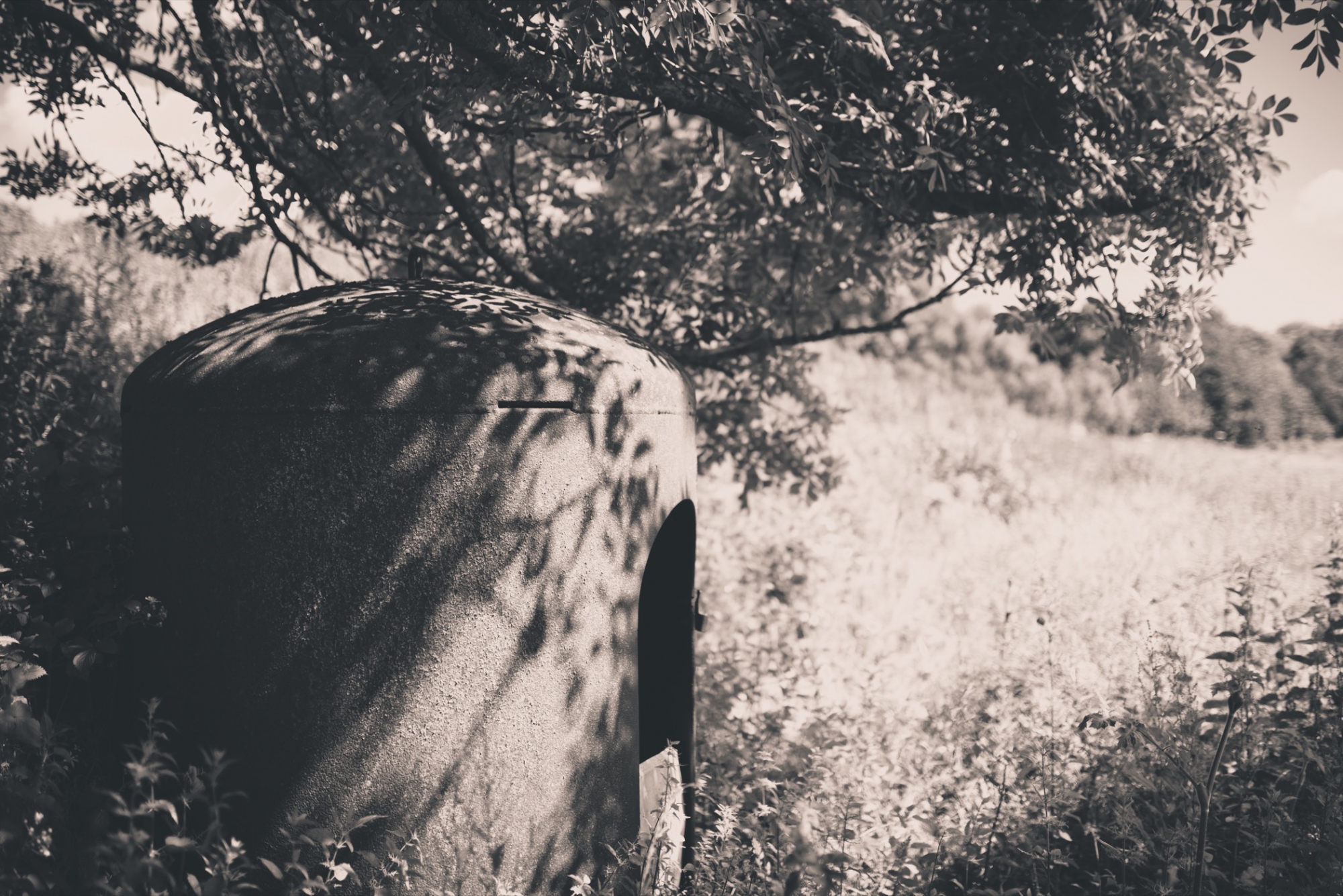