While the main accessable workings are Lefel Fawr, there are still plenty of other workings that were once accessable and still are dependant for one, on such mundane factors such as the weather and two, on who has decided to go for a dig to see what can be opened up. Many of these other workings are named after the lessee who held the original lease and went chasing the galena so you end up with an array of Bonsall's, Herbert's, Pugh's, Burrell's, Alderson's, Taylor's and John Oliver's, among others, dotted all over the site.

With all that in mind, this was a look to see what else is and possibly could be, still accessable.

Gills Upper Adit (and Rosa Level and Pugh's Adit)
Gill's Upper eventually became part of the bigger Pugh's operation along with Rosa Level and Gill's Lower Adit. While now banged up after a short way, the other side of the collapse can be accessed by SRT from above in Rosa Level. And technically, Pugh's should also be accessable. Rosa Level open but not much to see while Pugh's is still spewing out the lovely orange muck down at the road. Nice brickwork though in Gill's Upper - 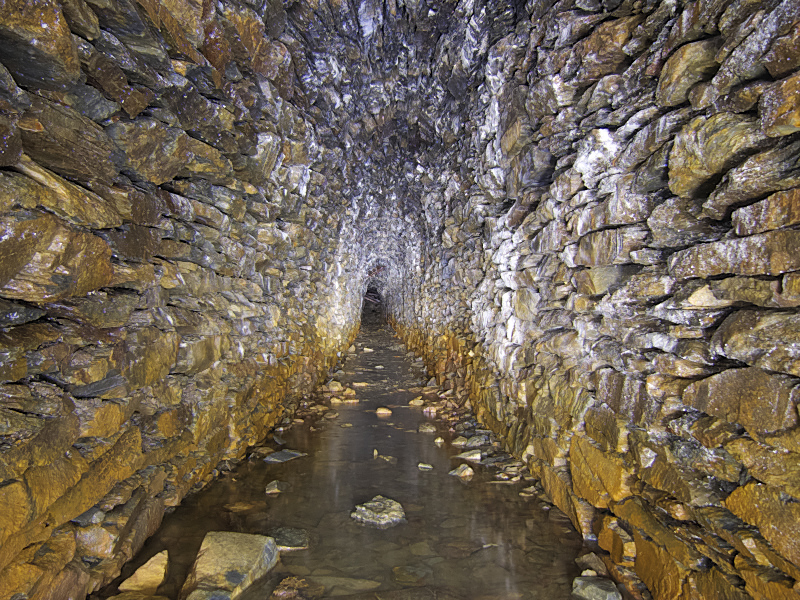 Day Level and Jackilas Adit
Jackilas is completed gone on the surface but Day Level, a short 50m drive just below and to the left of it, is open. It simply appears to have been an access drive to an ore chute (still in situ behind a tight crawl) that connected to Jackilas. A small Victorian child sent up the ore chute might be a go-er (I didn't bother !).

Alderson's Adit
Thought to have been driven in the 1820's-30's when the Alderson brothers from Swaledale had an involvement with Cwmystwyth. This level aided natural drainage to avoid any need for pumping. However, the Alderson's period of ownership coincided with falling lead prices and they were declared bankrupt in 1834. Some nice drivage in here and the main level is driven beyond the Kingside lode but does not intercept anything else. Eventually reaches stoping that gets larger with significant stemple rund and tonnes of water coming down on top. Blind drive with ends about 20m after this point. 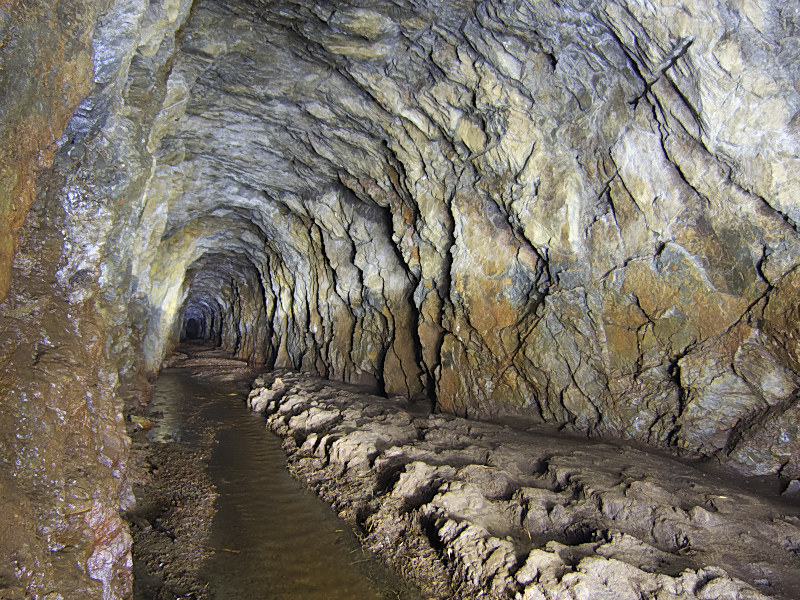 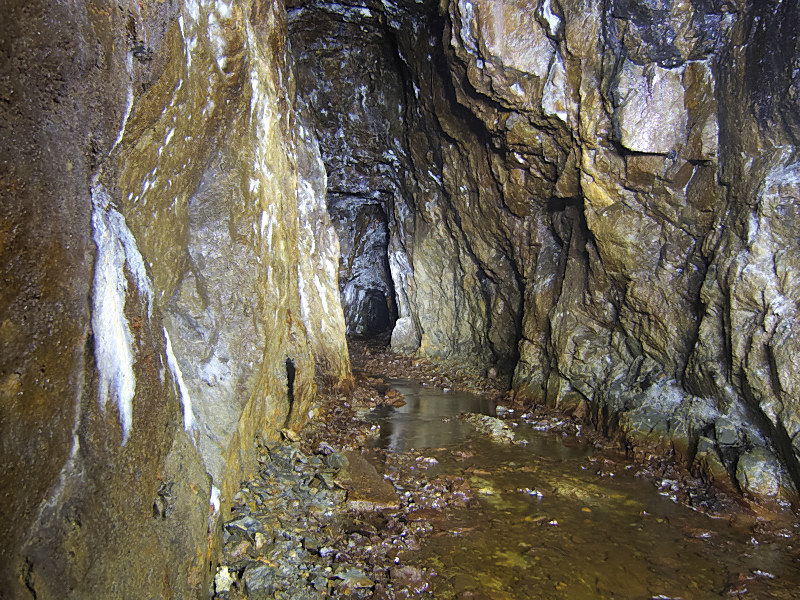 Stoping and water from above 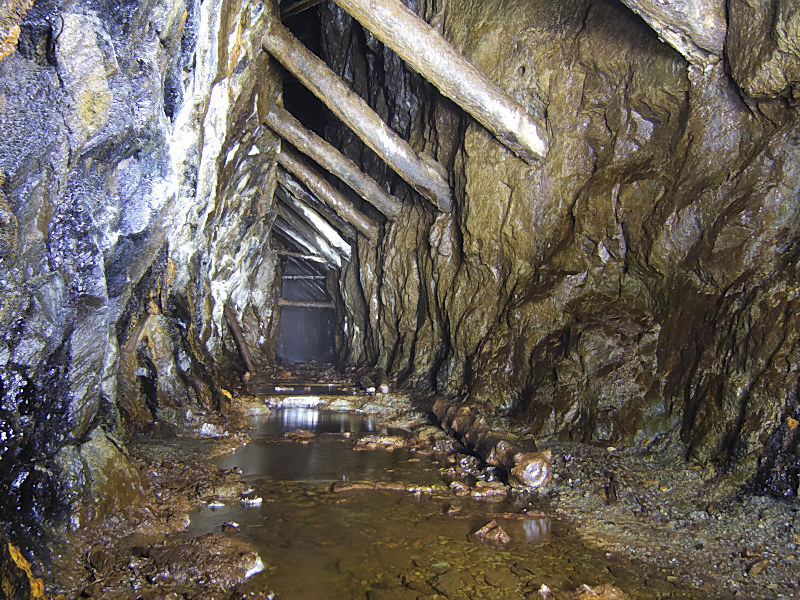 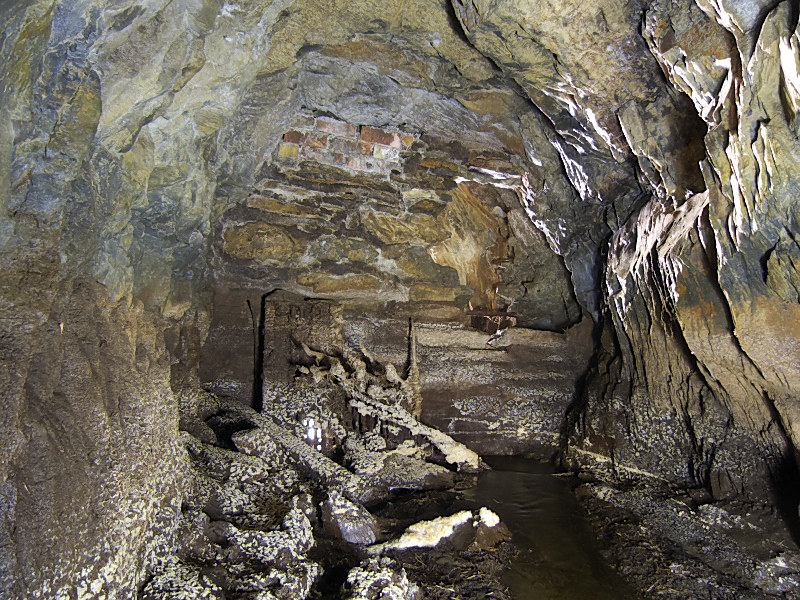 Pengeulan East Adit
Possible 19th century working. Open through a short squeeze but currently flooded to (at least) waist level so not pushed on the day.

Herbert's Adit
The workings around Herbert's stope, possibly date to the late 17th century. The Kingside lode ore body was over 6m thick at this point. The adit was driven north westerly to intercept the lode about 40-50m below the outcrop and provided drainage and a tramming route for the worked ore. The adit is perhaps 20-30m vertically above Alderson's Adit and the source of all the water in Alderton's comes from Herbert's. The majority of this water flows through a tight hole in the floor below the stope directly onto Alderton's.

On entering, you continue about 50m to a T junction. Take the right and not the left. Going left, it is not immediately obvious (but soon becomes very clear) that you are actually on a false floor packed with mining debris and large rocks. A quick way into Alderton's but not a very nice way. 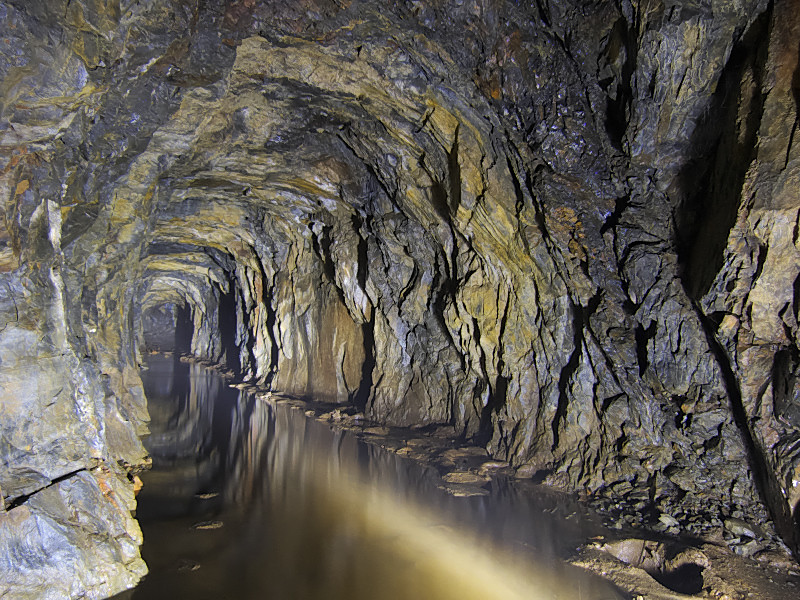 Drive down to false flooring 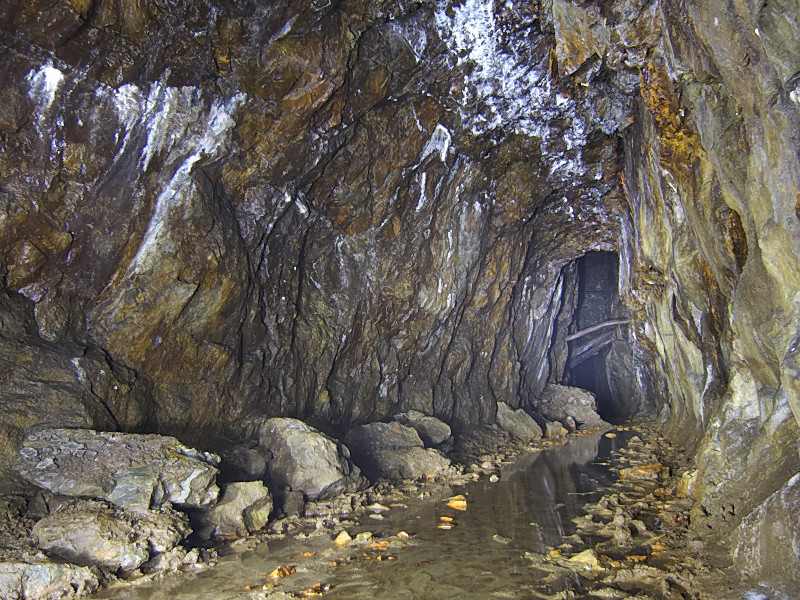 Herbert's Shaft and Stope from afar 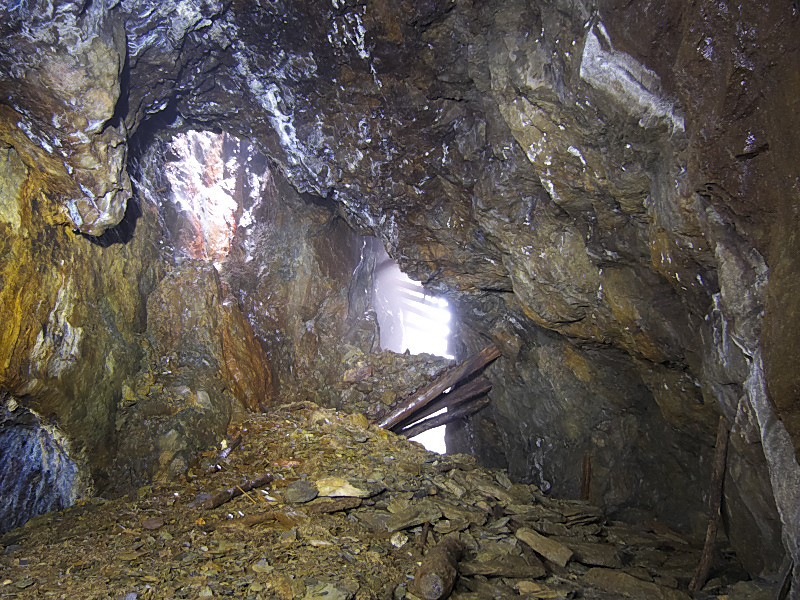 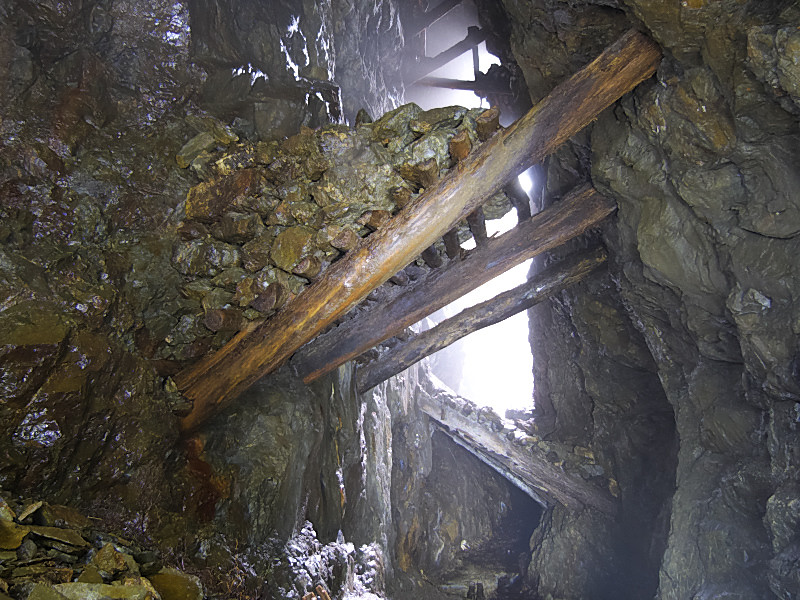 Tramway to the ore bin 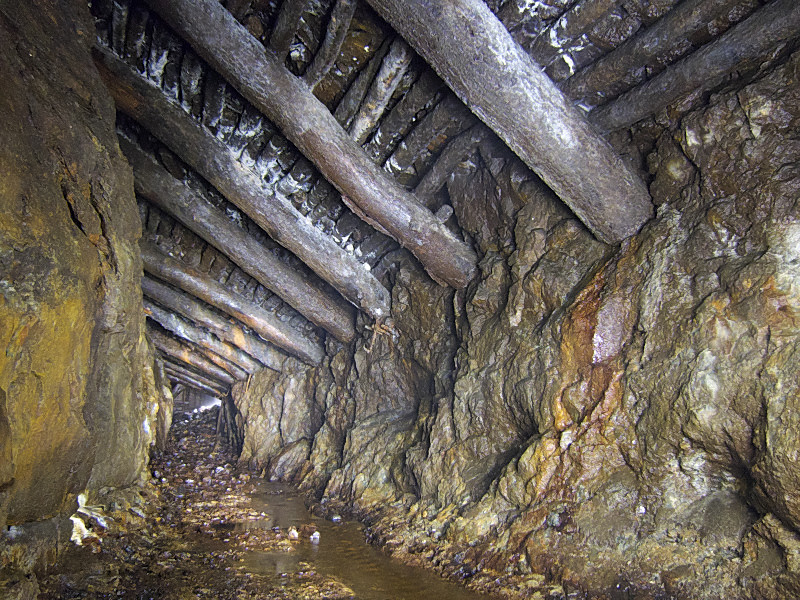 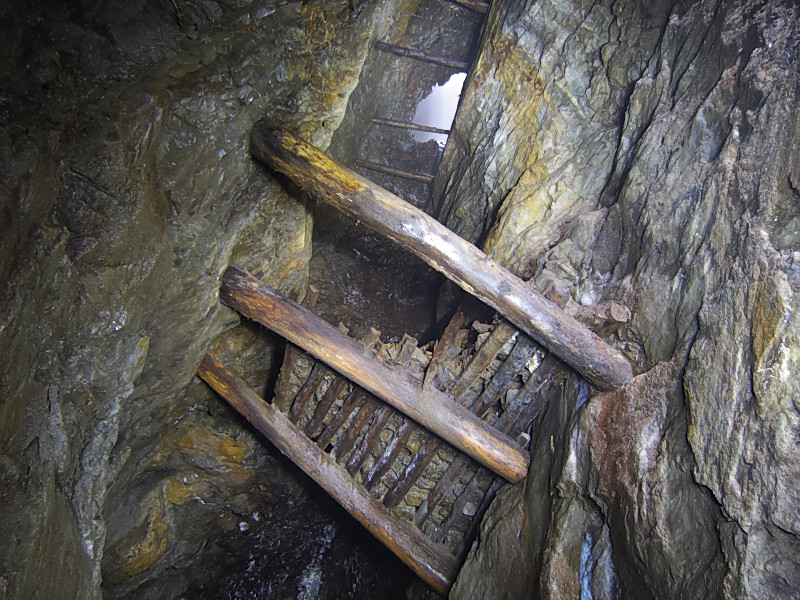 King's Adit
Due to the rather roundabout route I took, I found myself well below King's Adit and on the other side of the river and was not going back up again after 5 odd hours. From having a quick look through the bins, adit is open and from what I remember, was flooded to welly level, with an open winze on the right hand side before the heading goes blind. Access to Queen's Adit through the winze via SRT. One for another day. 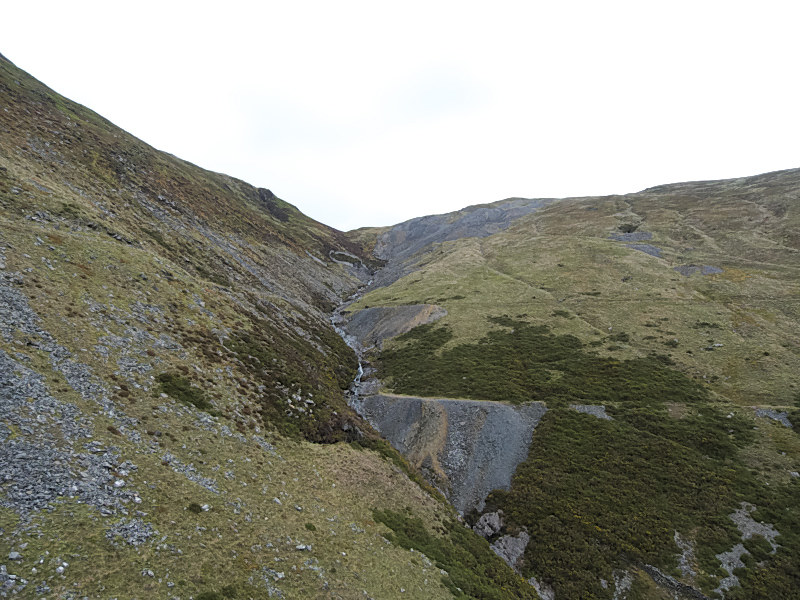 Thanks for looking !
You've got to dream big. What are we here for if we don't make our mark ? It's the buzz, building a team, finding the job, planning the job, carrying it out. It's the camaraderie, trusting other men with everything you know. With your life.

Regular User
Stunning pix. Wales has so much to offer in this department...

Regular User
Interesting stuff from someone who clearly knows their mines ( 'stemple rund' ?)

Regular User
Nice images there Matt, some interesting bits there

urbanchemist said:
Interesting stuff from someone who clearly knows their mines ( 'stemple rund' ?)
Click to expand...

Should have read 'stemple runs'...the smaller timber supports in a stoping which were used as steps.
You've got to dream big. What are we here for if we don't make our mark ? It's the buzz, building a team, finding the job, planning the job, carrying it out. It's the camaraderie, trusting other men with everything you know. With your life.

Regular User
I enjoyed that, thanks :)