28DL Full Member
The site is located within the hamlet of Noranside nestled within the heart of Angus in the East coast of Scotland, enjoying some of the most beautiful countryside in the region. Noranside is situated close to the A90 Dual Carriageway linking Aberdeen and Dundee. The site forms part of a large country estate formerly run as a government facility and enjoys a superb elevated position facing south over the Angus countryside. Noranside is believed to date back to around 1830 and Noranside House itself was originally constructed along with later editions added including The Stable Block, Walled Garden and Gardener's Cottage. The site in total measures approximately 53 acres... ...The main focal point of the development is the striking, 'B' listed Noranside House which was constructed and extended in the late 18th century, believed to be designed by Dundee architectural practice, Maclaren, Sons and Souter. There are 4 separate access roads to the development, which provides clear distinctive entrances. (Source: onthemarket.com)

HMP Noranside together with HMP Castle Huntley jointly make up the HMP Open Estate. HMP Noranside is an open prison holding low supervision adult male prisoners serving 18 months and over, including life sentence prisoners, who have been assessed as suitable to serve part of their sentence in open conditions. Noranside holds a small number of prisoners convicted of sexual offences. (Source: thelawpages.com)

The proposal to close Noranside was first announced by SPS in December 2010. Given the strict criteria now applied in the interests of public safety in the selection of offenders before they move to the Open Estate, the numbers qualifying to go to Open conditions have reduced and the facility at Noranside is now surplus to requirements. The facility is not suitable to house any other type of prisoner without substantial investment. (Source: familiesoutside.org.uk)

A dog has been found on the premises in the kitchen. SSPCA has also left a note with todays' date on it, on one of the windows, so they are aware of it.

Regular User
how long did it take you to upload this!
​

28DL Full Member
Not too long. I just attach the files (30 at a time) and then insert all full images.

Why @shaun that kid, you complaining? Too pic heavy?

Why @shaun that kid, you complaining? Too pic heavy?
Click to expand...

no just a question!

Again though, you might want to slim it down a little and loose some of the less interesting pics, other than that good effort
Ojay@28dayslater.co.uk‏​

28DL Full Member
Very nice pictures, always interesting to see the confines of a Cat D Jail, SPS run things a little different though to us down here in England. I remember seeing those Obs Panels become damaged easily, and the windows aswell...You can tell the cons got bored easily lol.

28DL Full Member
The site has now been bought and they have unlicensed guard dogs. Just wait till someone gets bitten. Chinese owners will be dragged through hell

while visiting family couple years back i had a mooch of the grounds the buildings were secure and as you say dogs on site! took a few shots of the areas i recalled and chucked the drone up. 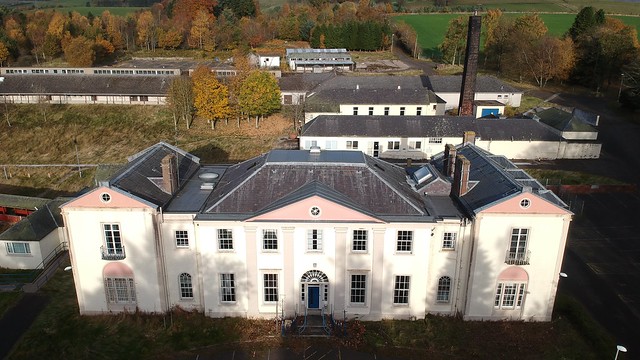 Liz29 said:
What’s happening on this site? Went up the other day & a Chinese man was sitting in a garage on a chair never said a thing to me but as a approach more upto the building someone was setting an alarm off, dogs running about wild, shit in every cell!!! & children playing in the back ground which was closed off to public and a massive gaurd dog going mental!? Had my son with me no reason to tell us to FUK OFF, very interested in what’s going on in here in the middle of no where & the main door now had big under quarantined signs up? Why is that if the building ain’t in use??
Click to expand...