I suppose it's been a little while since I last had the opportunity to follow a few of many leads of mine, never mind finding the time to sort the photos and information to make a report from them! Fortunately given a week away from work I had the opportunity to check out a few of the local flour mills in the east of the Aire Valley of which there are many thanks to the amount of waterways for power and transport and the perfect landscape for agriculture. Having a quick look around it looked as though Hudson Ward on Goole Docks and the Croysdale Mill at Whitley Bridge should be doable, both mills looked rather interesting and both dated from the late 1800's. Having a quick conversation with @AndyK we arranged a visit and managed to hit both mills.

Hudson Ward was the first mill on our list. Unfortunately it appeared as though the demolition lads were almost complete at work leaving just the 1920 built grain silo left to see, although no epic machinery would be available at this stage of demolition the views of the docks from the top could still be a winner.

The picture below shows you what Hudson Wharf looked like back in 1971, I'm unaware of when the original Victorian Mill to the left was taken out of use but from the photos I can find it would have been early to mid 80's. At this point in 1971 the Mill will have been powered by electricity, going back to the 50's though and the steam was powered by a triple expansion vertical beam engine.

It's a little sad to think the mill itself had been demolished in the 80's, but I do remember some of the old parts been kept in use within the modern updated mill that replaced the Victorian one. Here's one of my early photos of a ship getting loaded with grain at Hudson's Ward in 2010. Although not too much if you look behind the new grain tanks you can see a few of the old buildings remaining, pretty sad we missed these really... 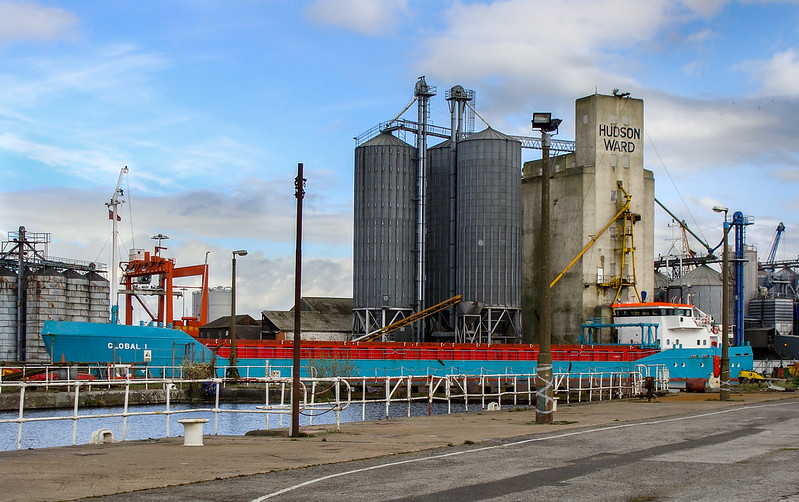 Here's how things are looking today, taken from behind the flooded drydock and the hydraulic No.3 Tom Pudding Coal hoist, we did have a look at the coal hoist whilst there but it was all locked up, I believe it's preserved by the marine museum just down the road. 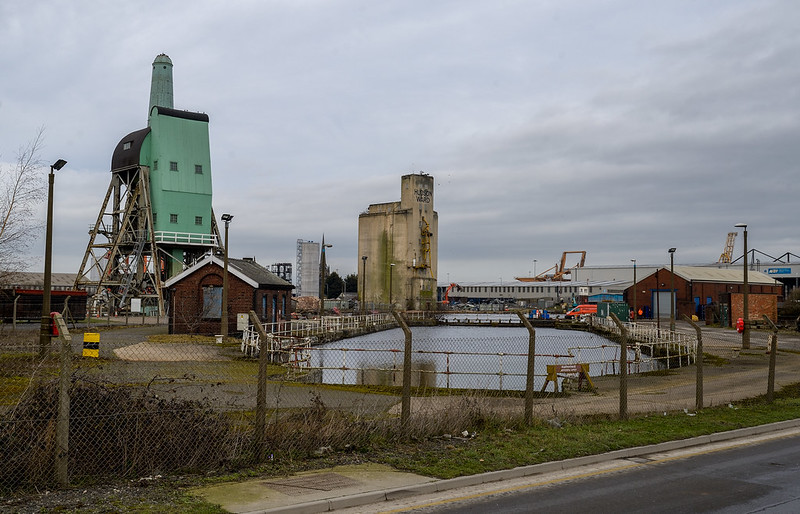 Thanks to @AndyK for allowing me to use a couple of pics he took of the docks from his drone. Really is a little odd seeing the Docks now a massive hole missing where the rest of the mill stood. I'm a little bit disappointed that the grain silo will be removed actually, Goole is a home to the Rail and Tom Pudding coal Hoists both built around a similar time to Hudson Ward, surely the mill is as important to Goole's maritime history as the other two are? 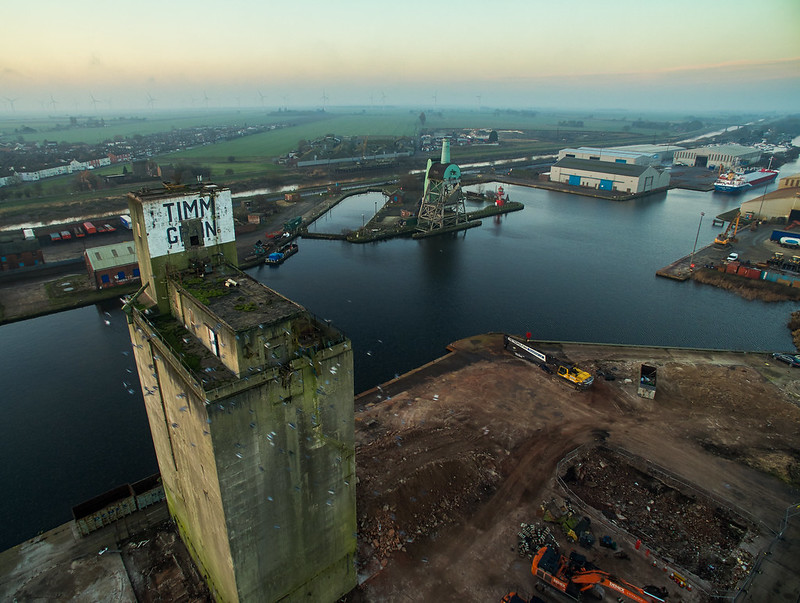 Always reminds me of the Dorman Long Coke Battery and Southbank... You can see St. Johns the Evangeline Church to the right too near the town centre, a Spire very famous to sailors heading home down the Ouse in past days. The rail wagon tippler can be seen also just left of the church, the small building made similar to steel headstocks of collieries. 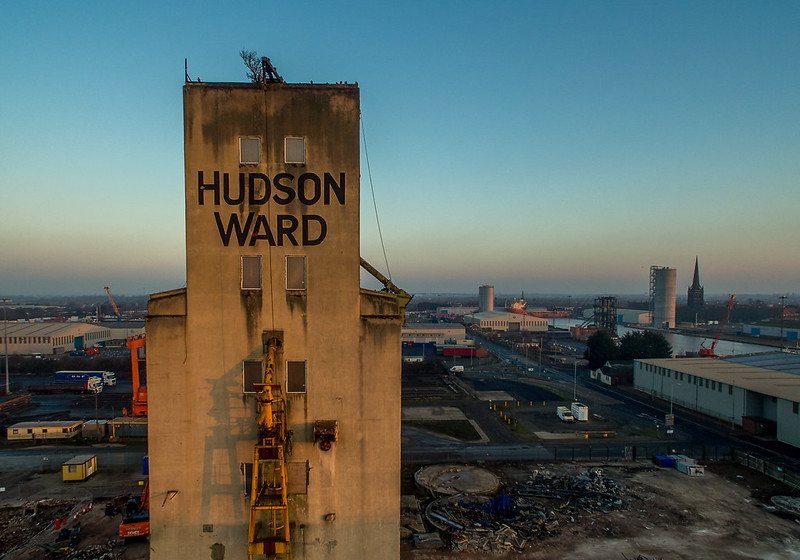 Right let's head on up then...

I have to say getting up here was a bit of a thrill for me, been a local lad it was great to be able to see Goole from the air for the first time and finally hit the mill that I've been wondering about from a young age. What I wasn't expecting from what really should have been an easy walk in explore was the amount of Pigeons we had to deal with heading to the summit. It was ridiculous, walking up around 10 flights of stairs getting hit in the face and shat on for a good 10 minutes was probably the worst thing I've decided to do in terms of exploring! When we got to the top as you can see in the pic below we were getting eyed by the flying rats for waking them up before sunrise... 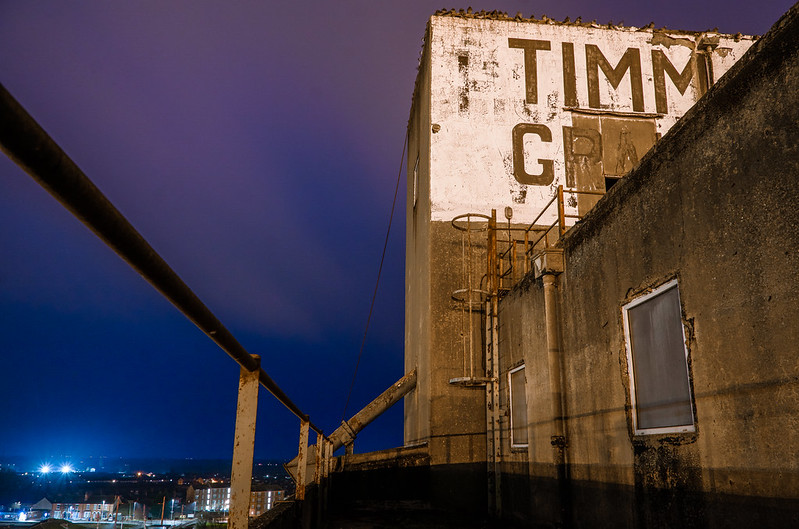 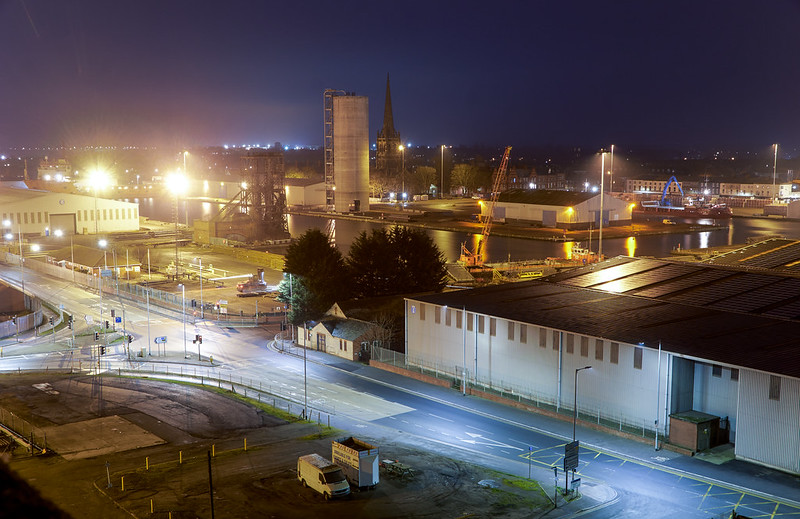 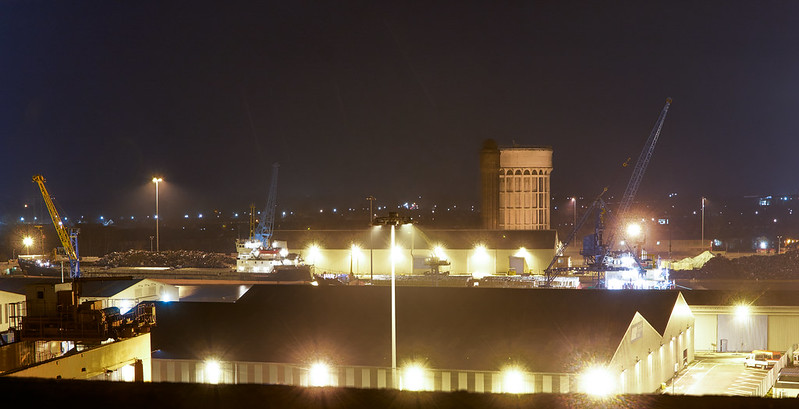 After a quick breakfast at Ferrybridge, Andy and I head towards Whitley Bridge to hit the second location of the day. Croysdale, now known as Bowman's Mill, really is a bit of a strange one. I've walked past this a couple of times since it closed in 2016 and the place despite it is not, looks like it's still in use by someone, upon a closer look though it really is a case of the lights are on but nobodies home!

Croysdale Mill was built in the 1870's by John & Thomas Croysdale's who operated the mill until in later years when John Bowman's & Sons took over the mill. Another flour roller mill that was powered by steam until the late 50's when modernisation of the mill meant removal of the engine and equipment for more modern electrically powered mill machines. More information on the engine can be found here, she was nick named the Old Lady of Whitley Bridge for her just short of 100 years service before been removed in 1953. https://catalogue.millsarchive.org/old-lady-of-whitley-bridge
​ 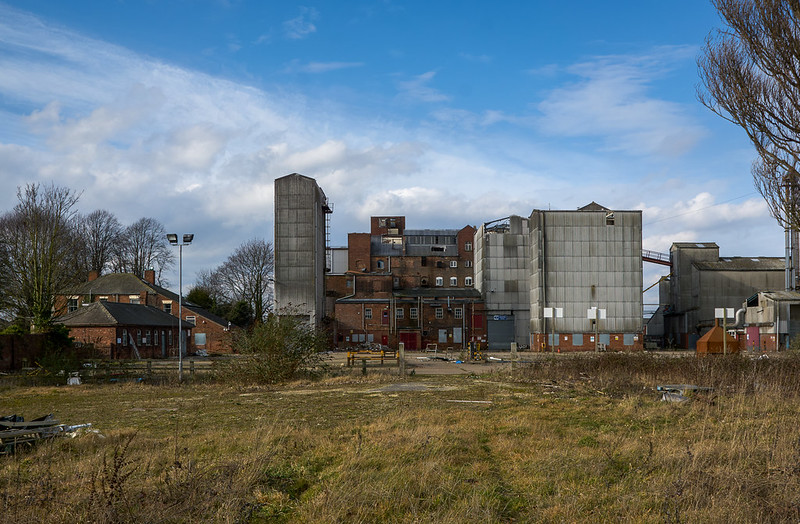 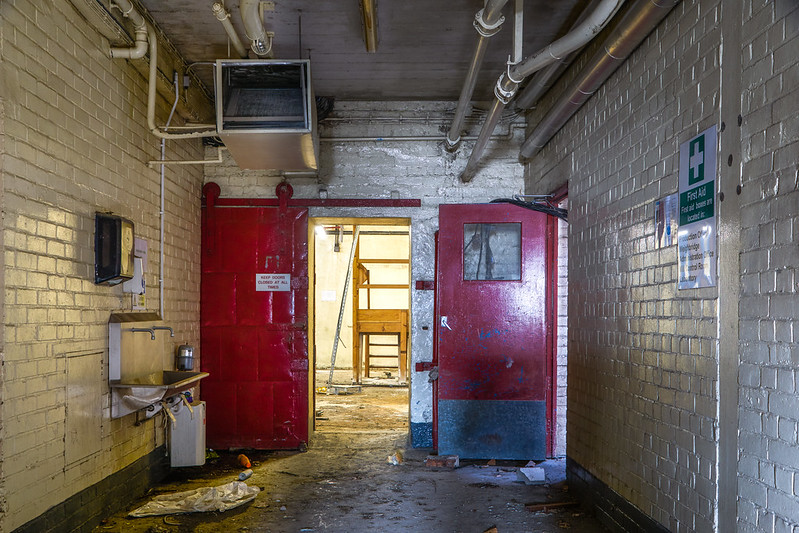 Some parts of it look like they've just been hit by a bomb... 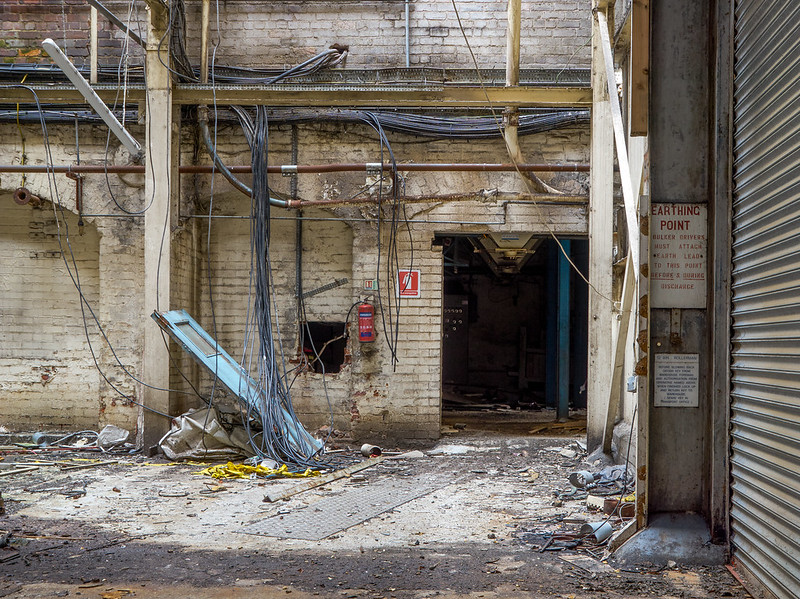 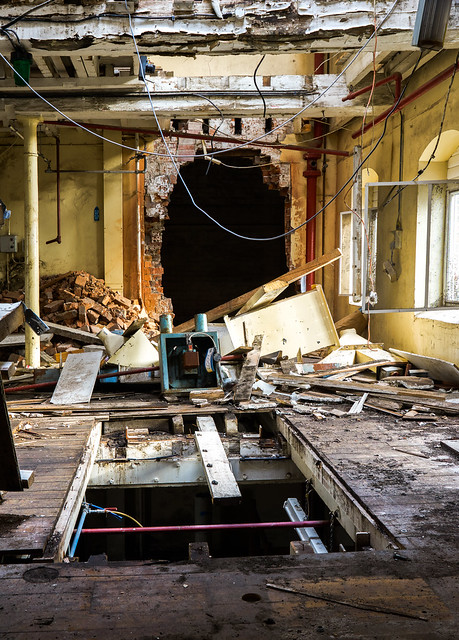 Other parts however are still fitted with machinery and are almost untouched... 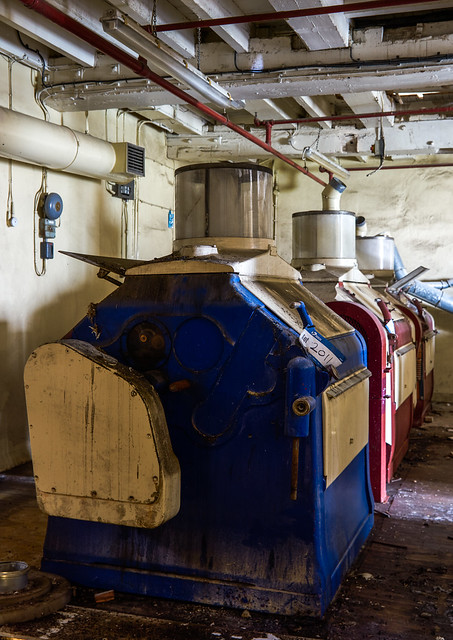 I've got to say seeing these old flour roller machines were probably one of my favourite parts of exploring this site, the character and age of the building is what really made it though. 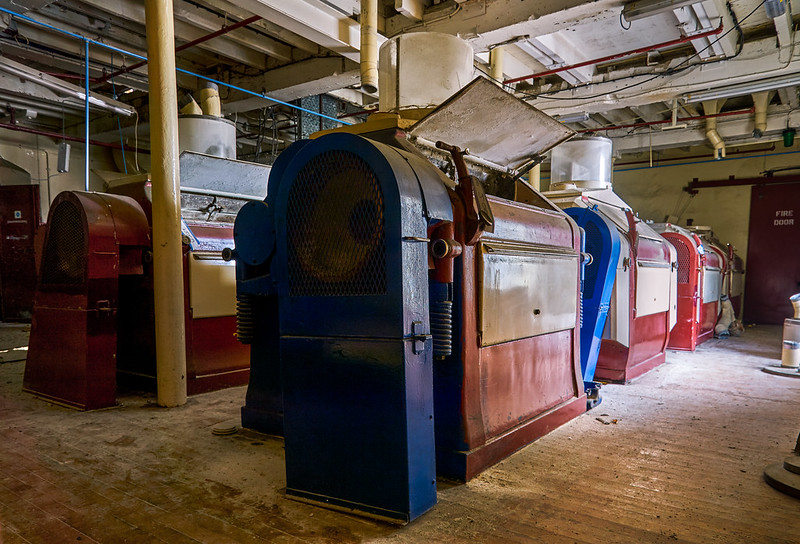 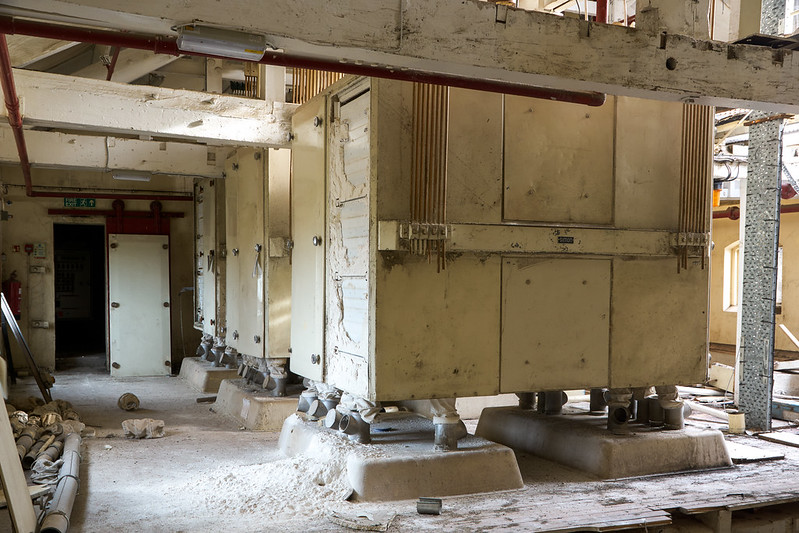 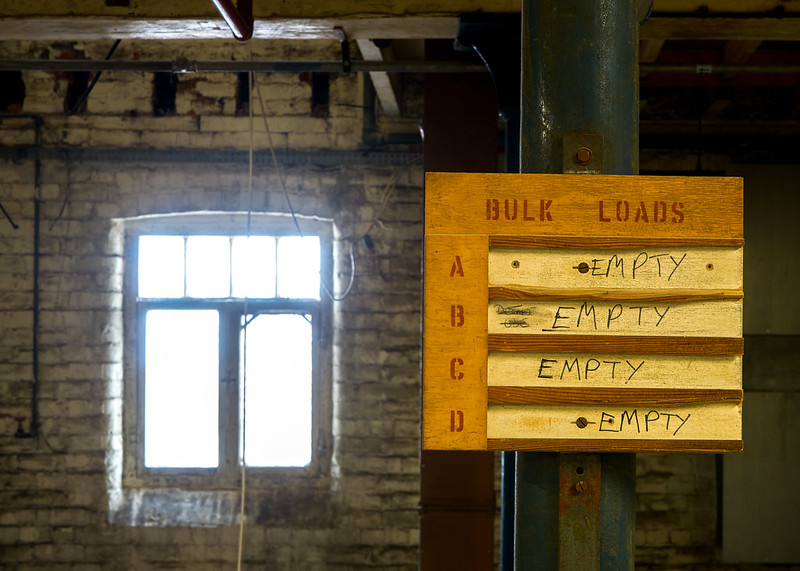 Flour loaders to fill up trucks. 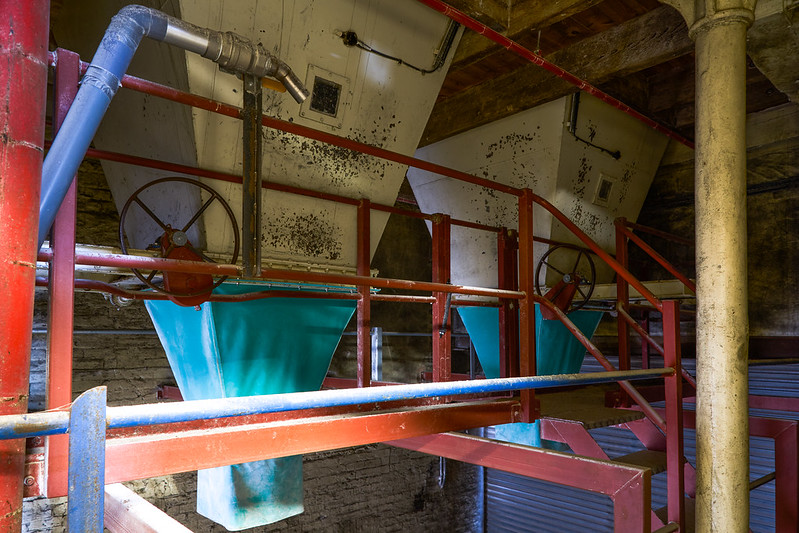 Some excellent architecture showing the age of the 1860 built mill throughout... 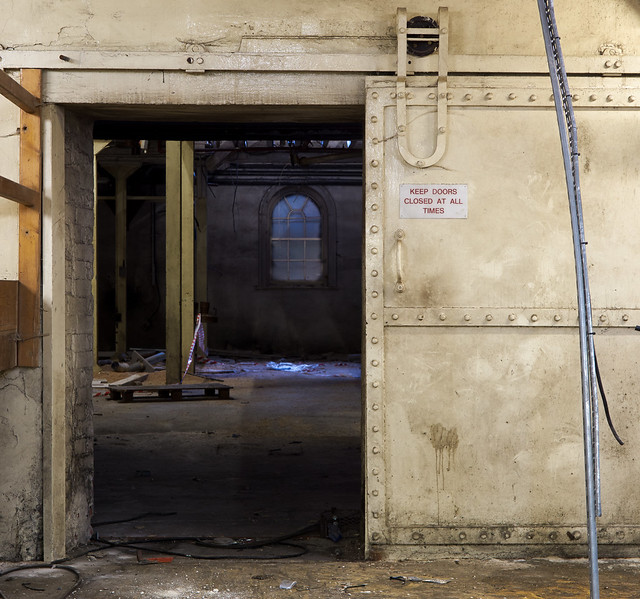 Some parts of the mill do look like the blokes have just left work for lunch in areas, still got 3 year old bags of grain and mix waiting to be used... 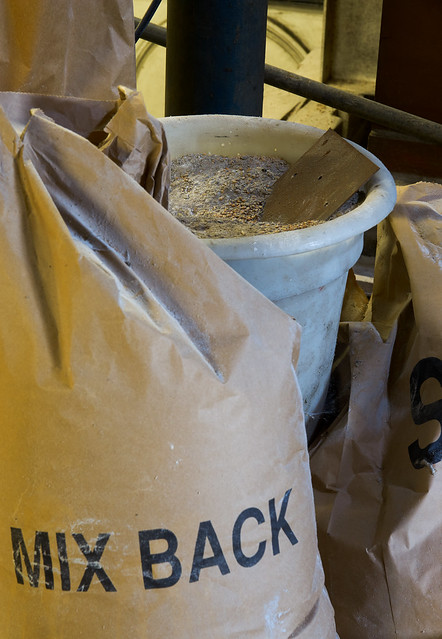 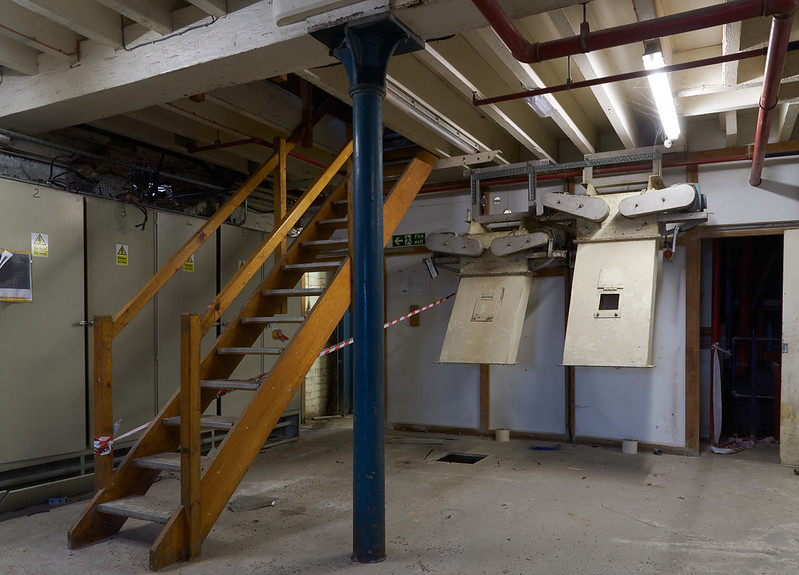 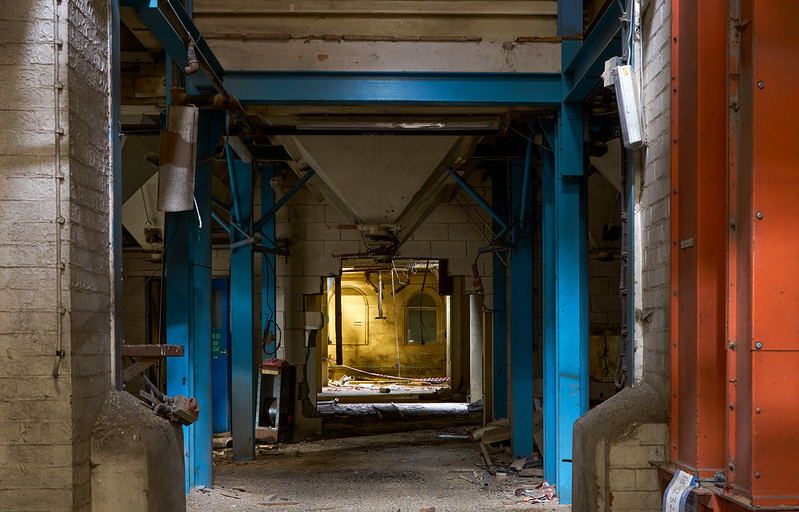 The labs are definitely worth a look as well, certainly an interesting building, one that never seems to end as well! I think we attempted to leave here at least three times before finding something else worth seeing that we'd missed before! 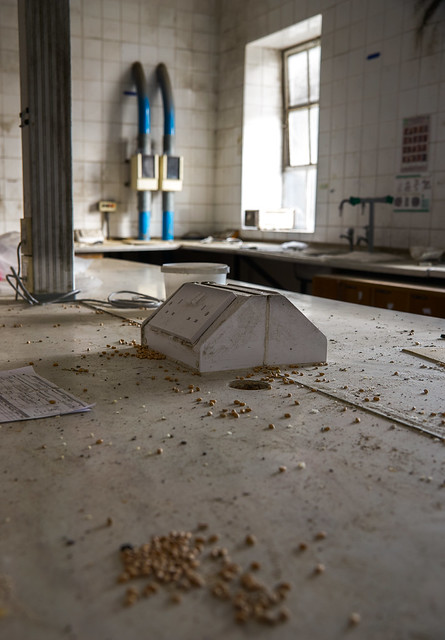 And finally a video showing how a flour mill works, the one in the video is another locally one in Selby that's still at work today, you get a nice clip in there of Ferrybridge 'A' & 'B' stations as well...


So that's the end of a day of flour mill exploring, sure I'll be keeping my eye on others in the area as I did enjoy these two!
Thanks for reading,
TAW

Regular User
what a report... good stuff The Amateur Wanderer

Regular User
Cracking stuff I bet this get a lot of attention now. My kind of place for sure.

Regular User
Been wanting to see Bowmans for some time, was sealed last year when I had a go and we too were a little put off by how many lights were on inside!
MoochsterUEurbexexplorer​

Staff member
Moderator
Wonderful report there, nice job with the bits and pieces around Goole. Really interesting to see your take on the mill too, almost entirely different to mine which is great.
My Website -> Behind Closed Doors

Regular User
Got to love the Goole skyline..
flickr


mookster said:
Been wanting to see Bowmans for some time, was sealed last year when I had a go and we too were a little put off by how many lights were on inside!
Click to expand...

Yeah, it's definitely a bit of an odd one isn't it? Almost looks as if it's still under some sort of use from the front!


Speed said:
Got to love the Goole skyline..
Click to expand...

To say the place is a hole, it does actually look quite impressive from a distance!

Regular User
Yeah always liked Goole, what an odd place it is.

The guy who wandered up to us a few minutes later, pissed out his head, glass in hand, wasn't looking so good by that time of the morning!
My Website -> Behind Closed Doors

The guy who wandered up to us a few minutes later, pissed out his head, glass in hand, wasn't looking so good by that time of the morning!
Click to expand...

That's an epic shot mate, and hahaha that bloke was something else! 'What you lads doing?' 'errr, just sorta looking about mate...' Never seen anyone look so confused!

28DL Member
Thank you for this. I'm local to Goole and found this really interesting.