The monastery of "Huerta de San José" was built in 1620 by Dominican Franciscan monks in the Seville town of Carmona, 40km from Seville. It was built as a large convent on an extensive plot of wasteland. Few documents exist in the Historical Archive of the City Council and only recently two manuscripts that accredit it were discovered.

"Arial",sans-serif;mso-fareast-font-family:"Times New Roman";color:#212121;
mso-ansi-language:EN;mso-fareast-language:EN-GB">
It has been abandoned for over half-a-century now. In the 1940s the monks who lived in the monastery survived by cultivating a garden, raising animals and begging for alms and food on the streets of the town and in the private farms and orchards that were in the vicinity. Post second-world war the monks were suffering from famine and in desperation were forced to go out at night to steal from nearby gardens to survive. Complaints by local gardeners to the ecclesiastical tribunal led to the closure of the convent and in the 50's it was abandoned without notice and sold in 1957 to new owners, possibly from Madrid. Rumours prevailed that the sale was the revengeful result of a Prior who had been transferred to the convent against his will, and, in revenge swore that if one day he ascended and came to occupy a high position in the capital of Spain, he would sell the monastery. It seems that he came to fulfill his threat by selling everything but the building, which remained in the ownership of three monks; Fray Rafael, Fray Luis and Fray Manuel. They made a great effort to rebuild the building but refused to sell it.

An alternative explanation to the abandonment of the convent was given by a police officer and the son of someone who worked in the monastery at that time.

According to this statement, one morning, the bodies of several friars were discovered slaughtered and hung on the hooks on the roof of the basement. The police went to the convent to find a scared friar hiding in a corner, confessing to a massacre which had been “ordered by the Devil”. This story lacked any credibility given the aforementioned friar’s lack of the physical strength in order to carry out such a massacre. Rumours were widespread amongst the inhabitants of Carmona of murders motivated by the quarrels between the friars themselves due to homosexual practices.

Such violent events were no stranger to the convent. Juan Rodrigo Perea became Dominican friar of the convent of San José in 1677. On November 20th of 1680, Jaime Malvidas entered the convent as an aspiring novice. A tall man with an aquiline nose and very bushy eyebrows, he liked solitude and hence was never seen in the company of other novices, even in the chapel. On November 25th, 1680, when the monk woke up, he did not find the door of his cell open as usual. It was the custom to close it with a bolt from outside after ‘Vespers’, when the Dominicans retired to rest. It would then be opened from outside the next day at dawn time. Thinking that was earlier than he had believed, Malvidas devoted himself to his prayers and meditations. He then heard some quiet steps that came from outside in the corridor and stopped just inside the door of his cell, opening it with a bang. Mysteriously, when he peered out there was no one there. Thinking that he was late and that the mass had already begun, he ran to the chapel. When he arrived at the chapel he found no one, but he heard some noises that appeared to come from the kitchen. He then realised they were in fact emanating from the basement. Peering into the basement he saw next to the Father Prior, all the other friars hanging from the hooks that were used to hang the hams and chorizos that the Franciscan brothers cured. There was blood everywhere and ‘small beings’ clustered around the dead bodies feeding on their flesh. The beings were then heard to say "I let you live so you can proclaim my coming to the world". Immediately a fire spread throughout the basement and at that moment the frightened friar came running out screaming "Go and say that Satan is here". No one believed the monk, who was arrested after reporting the incident to the authorities and reporting everything that happened.

According to the then ‘alguacil’, Alonso Sans de Heredia, during the burial of the monks murdered in the basement, in front of many countrymen of Carmona, the sky darkened and two columns of fire appeared, between which appeared the vision of a horrifying face in the form of a rodent. Shortly afterwards a white light descended in a sudden thunderbolt and from the light came another more human figure, causing all those present to flee. The next day, many men armed with crosses and Bibles approached the convent, knocking down the doors and entering the building. The devil was apparently seen on the tower watching and he threw many of the crowd from above “like dolls in a wind” and an earthquake destroyed the convent and the vast majority of those who were there. A voice could be heard thundering "Perish everything and everyone."

All this is recounted in a document signed by the Archbishop of Jerez at that time, which gives some credibility to the events. Rumours began to circulate that in the interior of the ruined monastery, as well as in the surrounding area, Gregorian voices and chants were heard, strange lights were displayed and some who had come there during the night said they had observed ghostly silhouettes.

Since then many researchers, equipped with the necessary instruments, have come to carry out investigation and most of them have found surprising results and atypical and even dangerous situations, for which they have found no explanation. For example, sound recorders have recorded strange sounds and cameras documented unexplained lights. On one occasion, several investigators were checking all the rooms in the place. They recalled that when entering the room of the last wing of the building and descended to the crypt they saw a glow in the room at the end of the wing and headed towards it. However, the glow then disappeared. They also began to hear strange sounds, like the dragging of feet that moved slowly from one side to the other. Their temperature measuring devices recorded -15ºC at the altar and they also observed a luminous silhouette wandering between galleries. One of the investigators ran after the silhouette but was thrown back by an invisible force that left him kneeling on the ground. Other researchers or fans who have come to the place have suffered similar experiences.

To this day the ruins of the “Monastery of the Devil” continue to cast their gloomy silhouette on a sunset sky.

2. The Explore
First report for a while and one of the last of the year. Not really into all this ghost stuff and didn’t feel one bit spooked despite the ‘history’ of this place. It’s no more than a shell now but with the setting sun shafting in from the west, this was a very photogenic wild ruin worthy of half-an-hour of your time. It’s a drive up an unsurfaced road and then a walk up a farm track to the monastery. No devilish goings on. Just lots of arches glowing in the golden sun of an Andalucian sunset.

3. The Pictures
The approach: 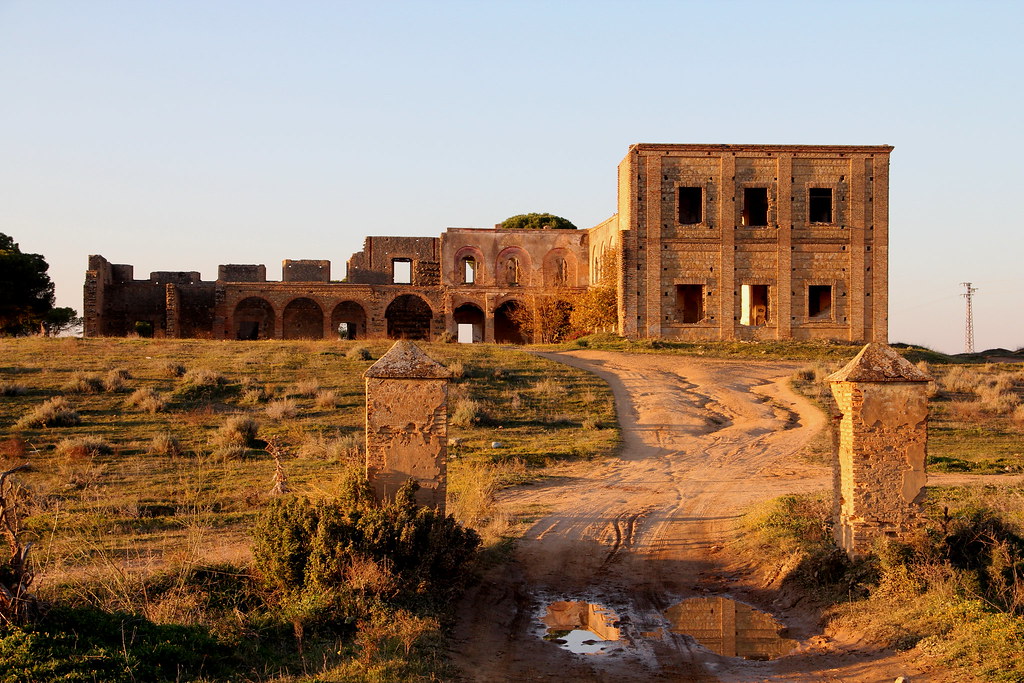 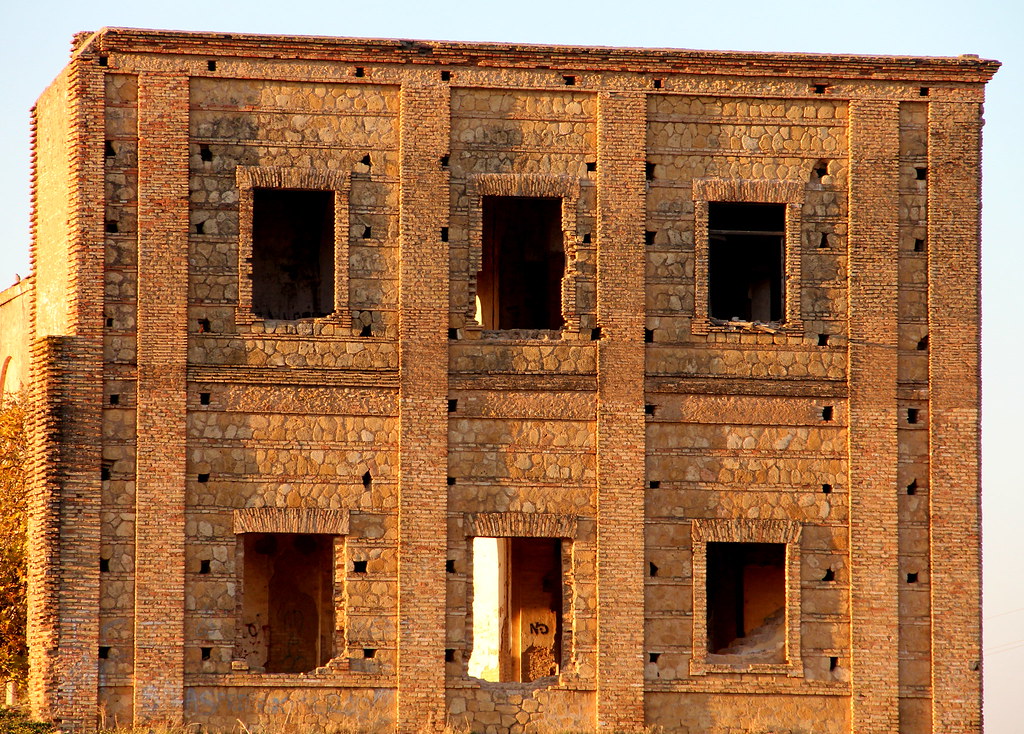 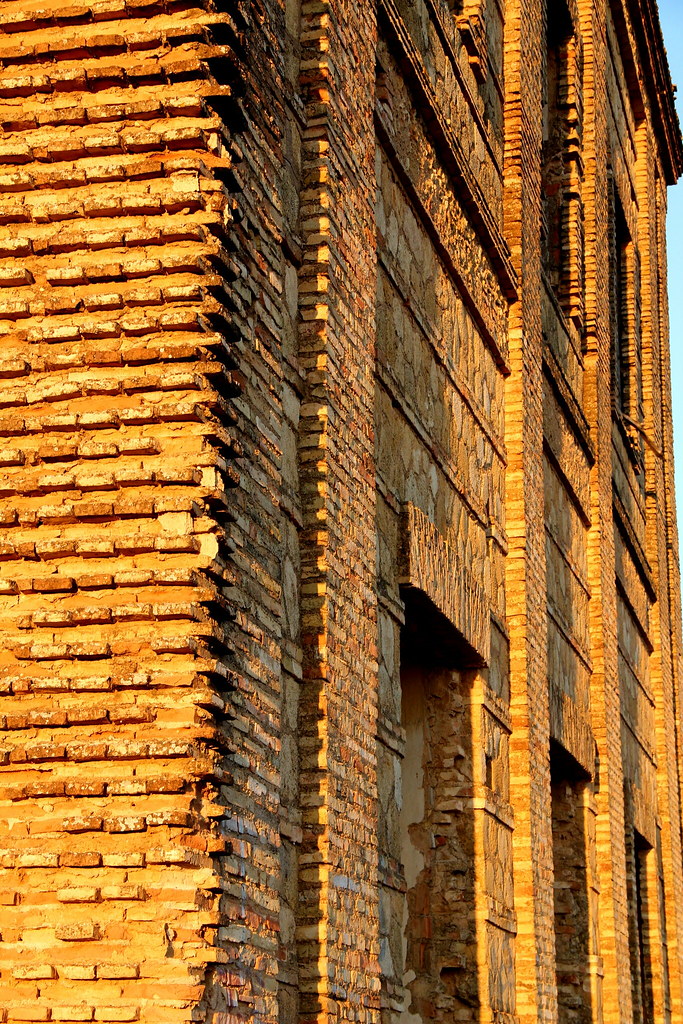 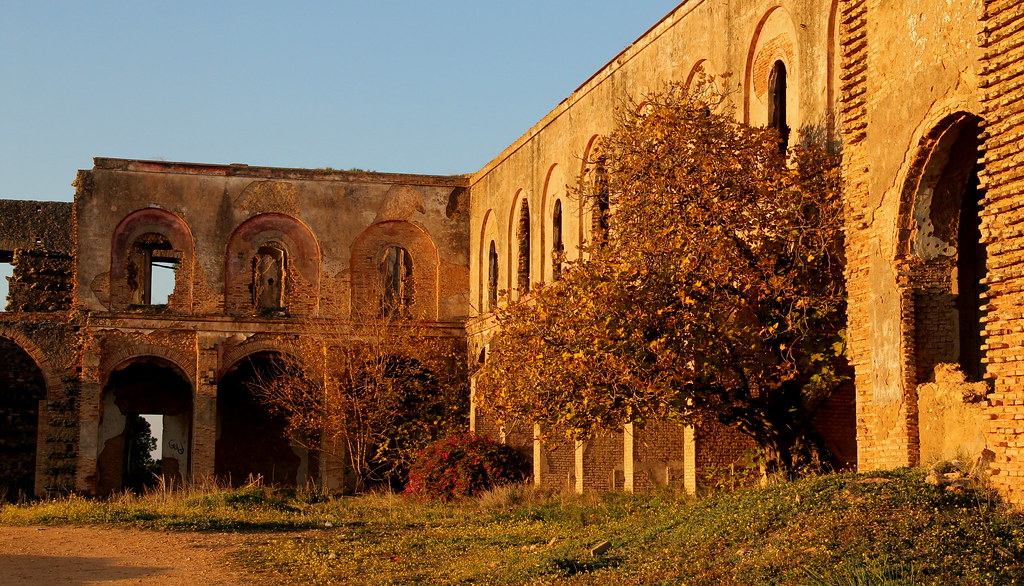 Inside is just a crumbling shell: 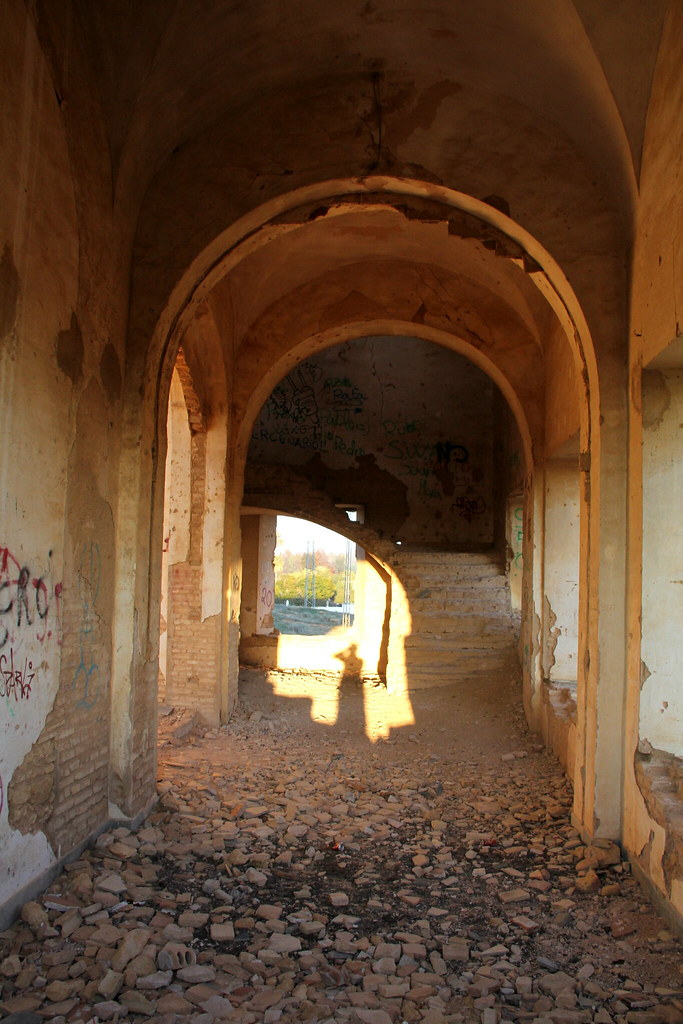 …but photogenic all the same: 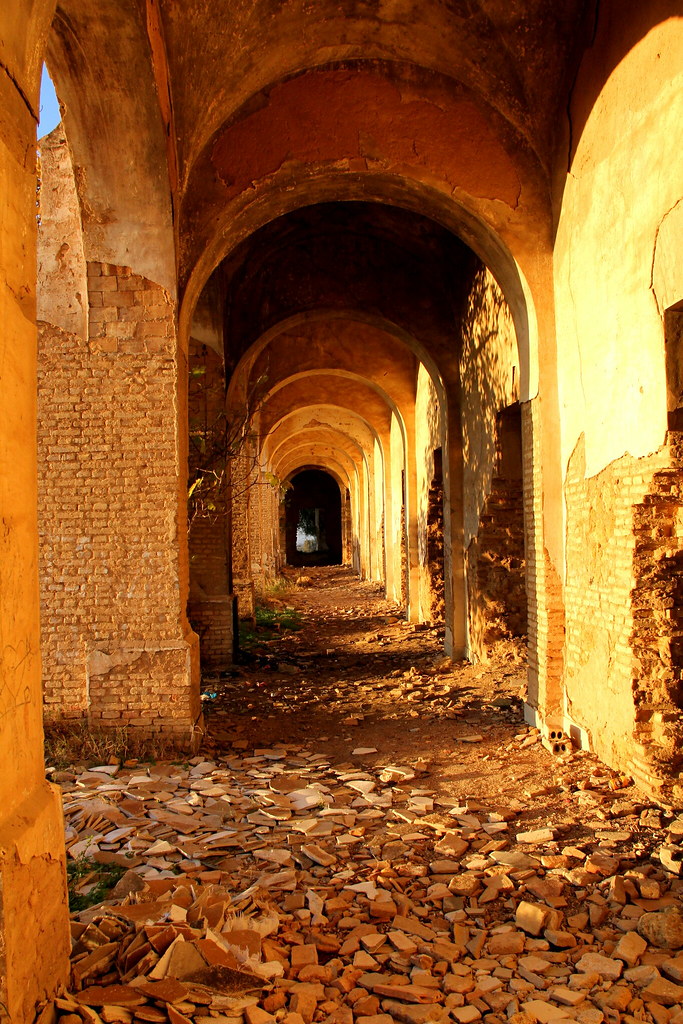 Not sure how this hole got here! 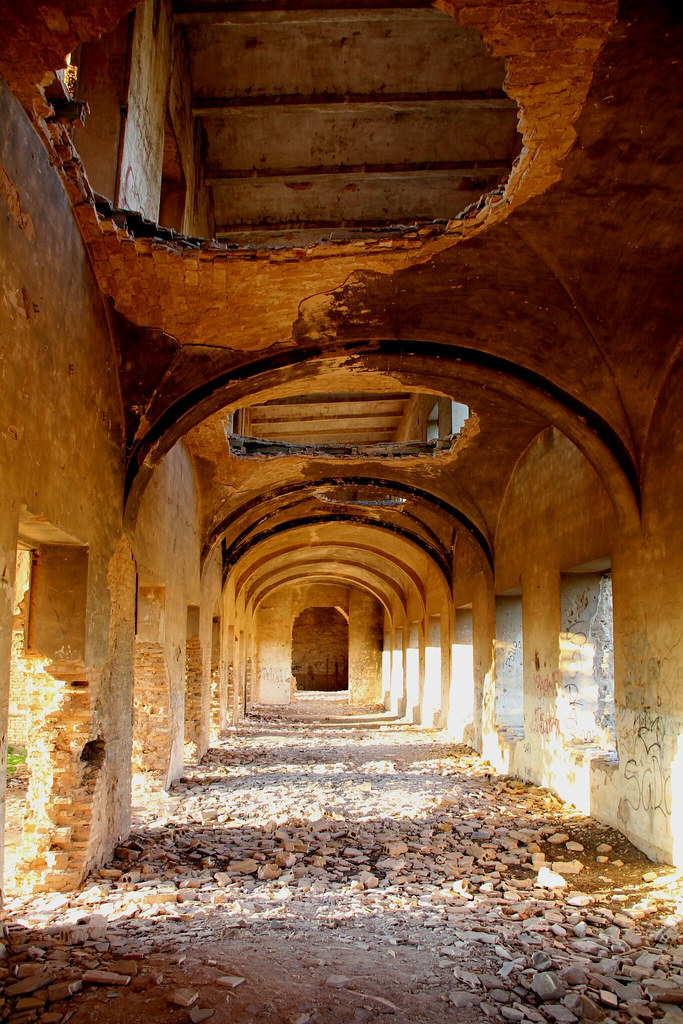 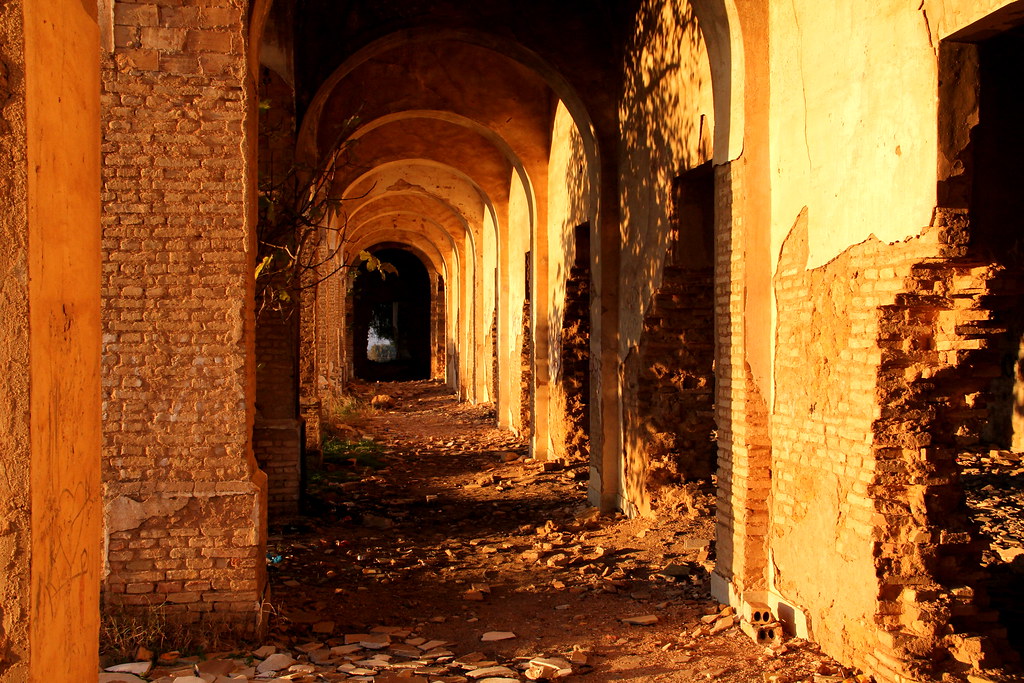 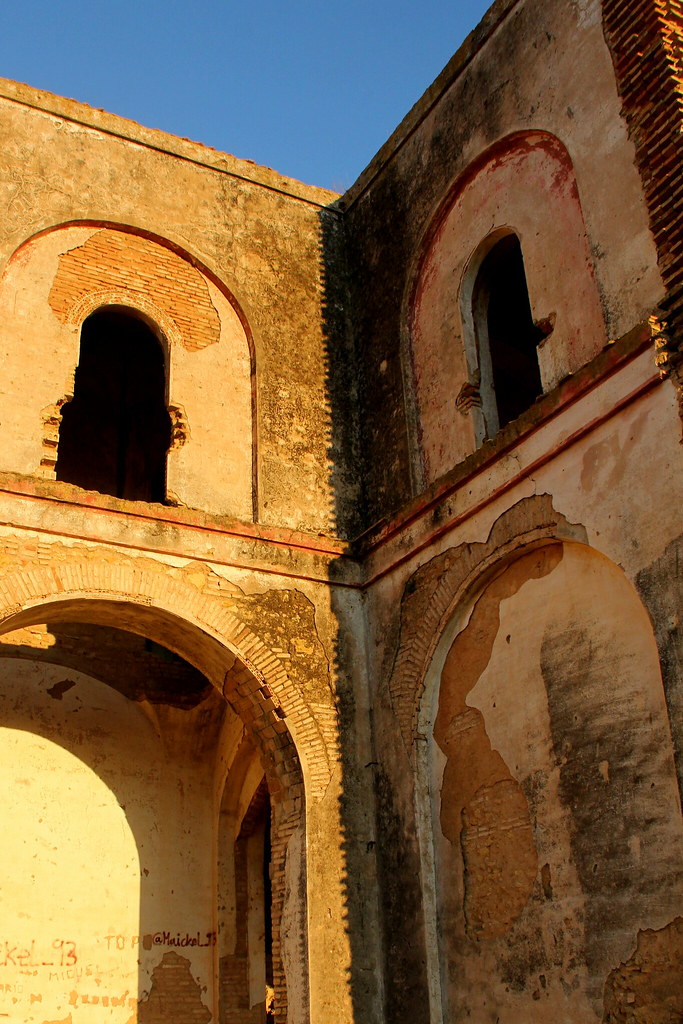 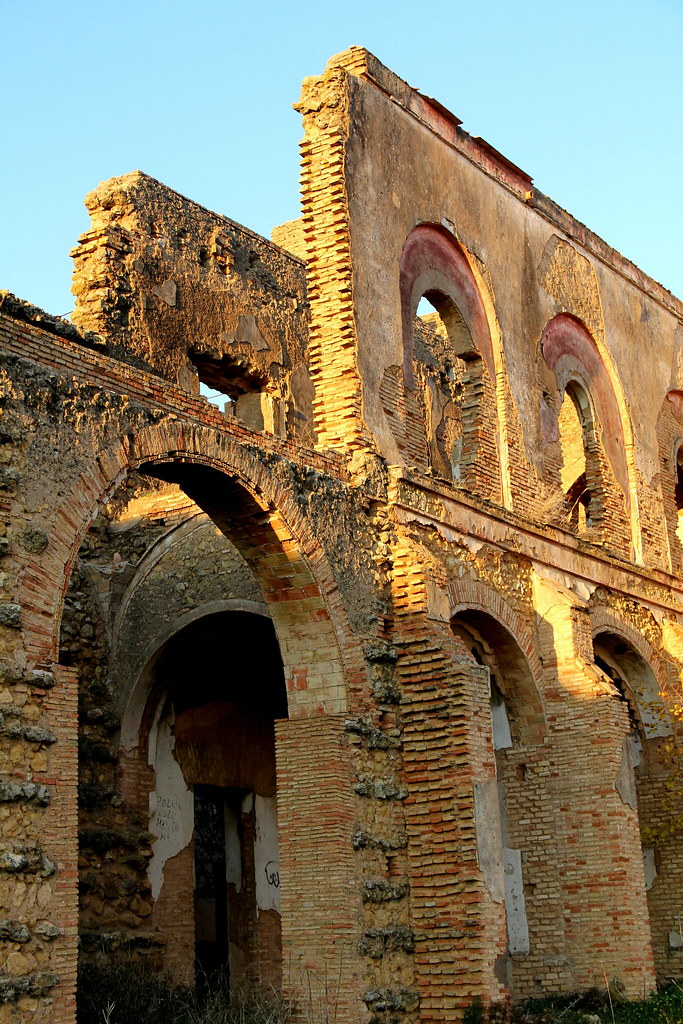 And some of the many arches: 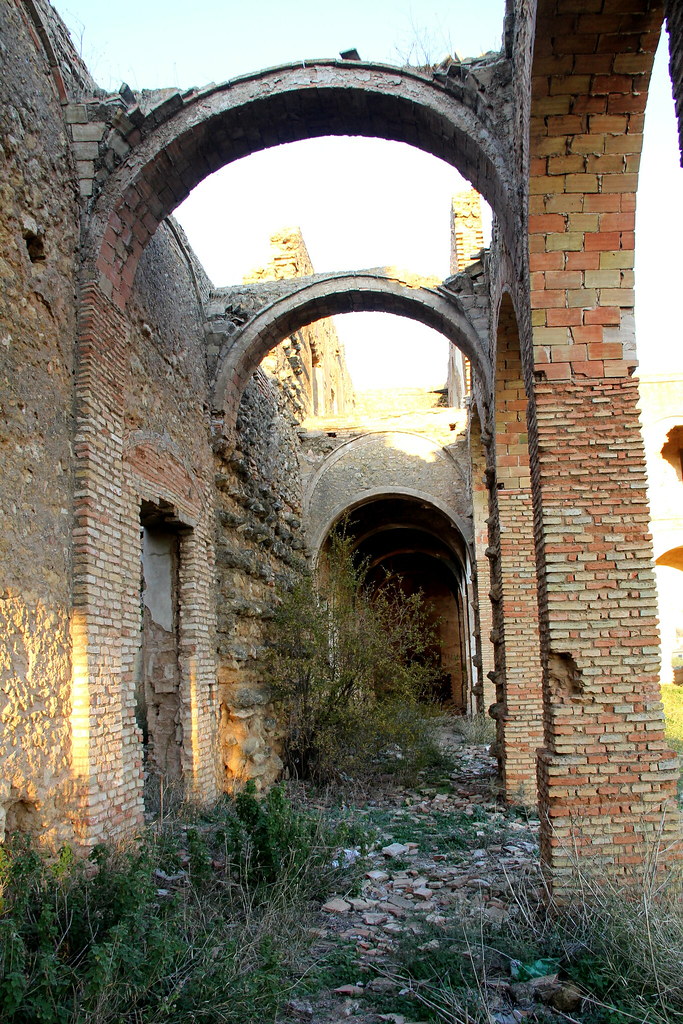 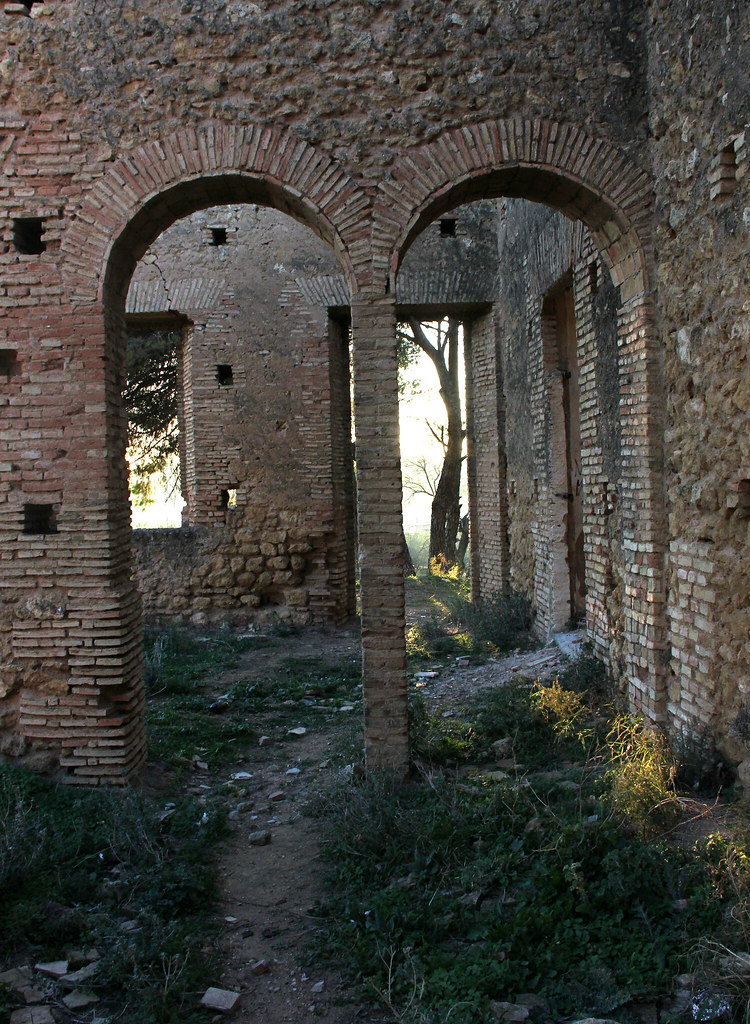 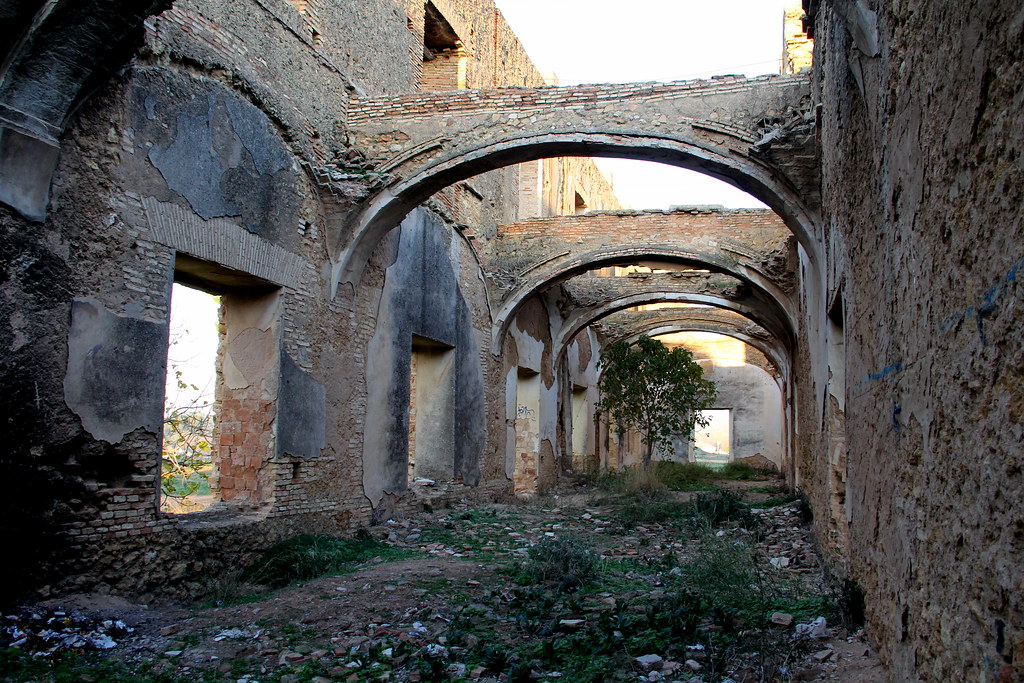 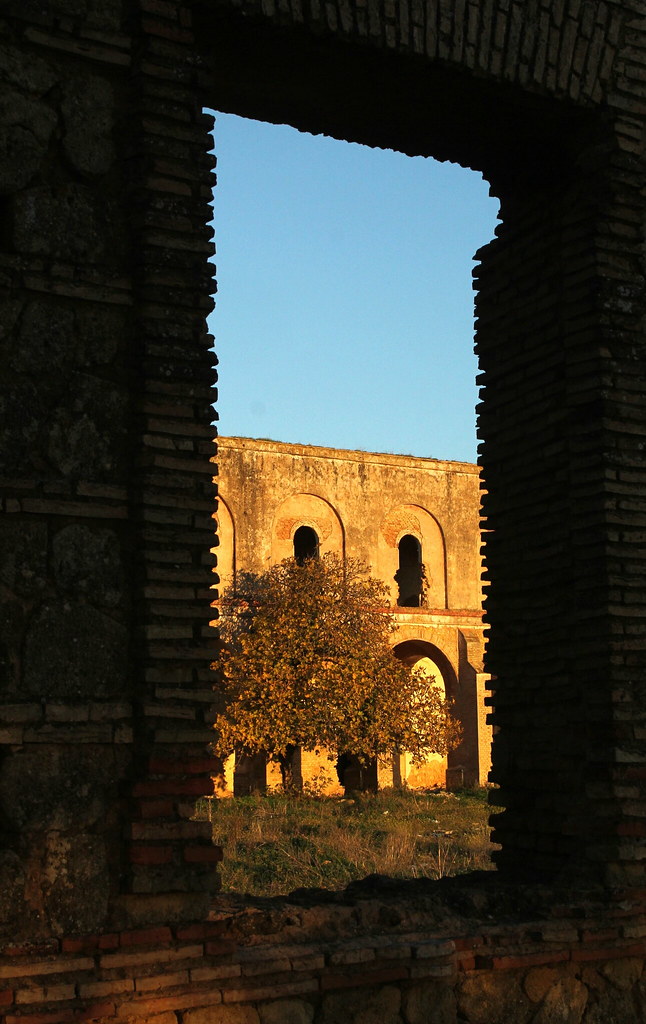 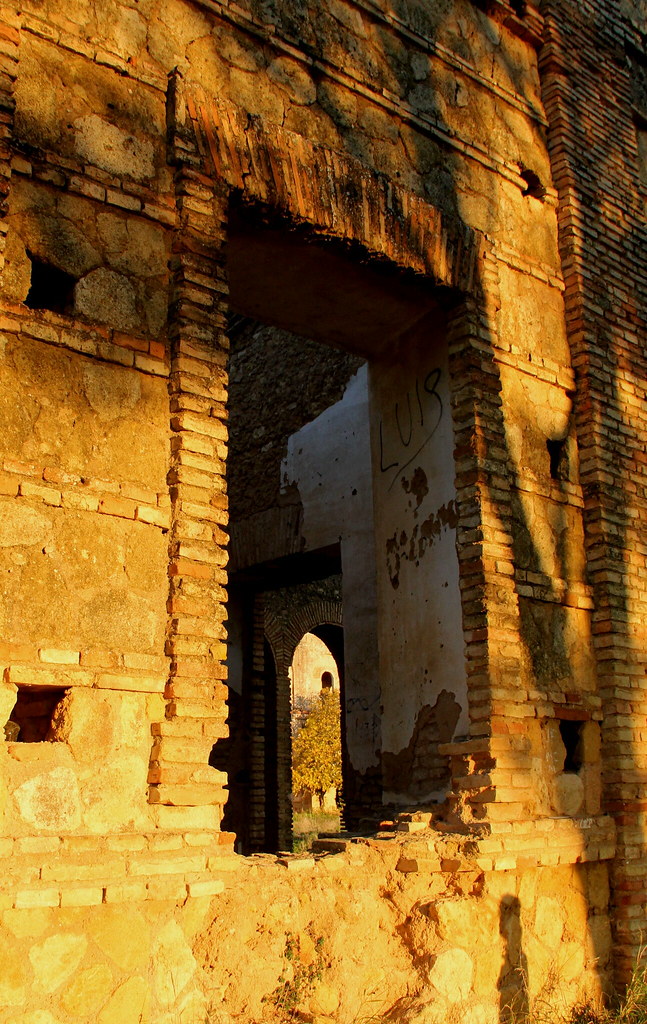 In all its sun-drenched glory:

Regular User
Nice photos and nice light. Im also jealous of the fact that you’ve had some sun while the weather’s been shitty back here!

tarkovsky said:
Nice photos and nice light. Im also jealous of the fact that you’ve had some sun while the weather’s been shitty back here!
Click to expand...

Cheers mate. Ha ha...yup - wall-to-wall sun all week! Bit of a shock to get back to Blighty...

HughieD said:
, which gives some credibility to the events.
Click to expand...

.....and I'm gonna call bullshit. No it doesn't,. You've smashed it with the photos of a cool site but what a load of hocus pocus crap

Yorrick said:
.....and I'm gonna call bullshit. No it doesn't,. You've smashed it with the photos of a cool site but what a load of hocus pocus crap
Click to expand...