Regular User
1. The History
The former Air Ministry bomb store is located near the village of Llanberis, Gwynedd, North Wales. In August 1939, just prior to the start of World War 2, approval was sought to convert the former Glynrhonwy Isaf slate quarry into a 18,000-ton capacity bomb store. The quarry, which had previously closed in 1930, consisted of a number of deep, open pits linked together by tunnels. The air ministry planned to convert the eastern pit of the mine using the same technique used previously at Harpur Hill in Derbyshire.

On approval, the quarry was adapted to provide storage over two floors using eight 24-feet wide, 200-feet long galleries. The lower level galleries were identified by the letters A to H and J to S on the upper floor. These, in turn, were divided in eleven bays, indicated by a red roundel painted on the wall, midway between the numbers. The lower floor had a reinforced concrete ceiling, supported by concrete pillars, 12 feet apart, running down the centre, supporting a concrete beam running the length of each gallery. This, in turn, formed the floor of the upper level with its eight arched roof galleries, with no supporting pillars. The doorways on the ground were square while on the upper floor they were slightly smaller and arched. Three electric lifts were installed so the bombs could be transported between floors. Two lifts connected gallery C and M, one at arch 6 (now next to a brick wall built after the collapse, rendering it of little use) and the other at arch 9. The third lift was in the collapsed section. A single staircase connects the lower and upper levels at C11.

In terms of access to the store, there were three tunnels into the bomb-store. The main access tunnel was part-square/part-arched and 15-feet wide. The quarry’s northern tunnel was adapted to take a standard gauge railway line during the construction of the depot. This ran into the wider, sunken area between gallery B and gallery C, allowing the floor of the depot to act as a loading platform, either side of the line. The smaller 7-feet high southern access tunnel of unlined rock originally took a narrow-gauge tramway into the eastern pit provided an emergency exit and came into the store at the back of gallery D.

Map of the store: 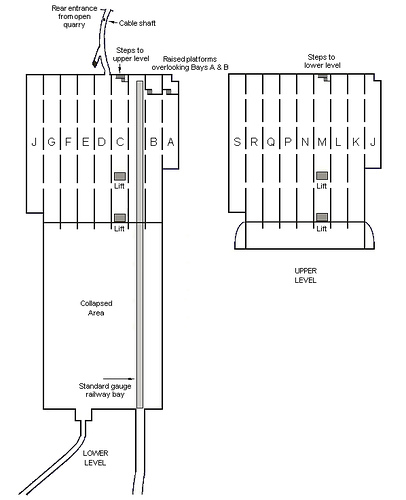 The bomb store offically opened in May 1941 with the first consignment of ordinance arriving the following month. However, on 25th January 1942, with corners having been cut during construction, two-thirds of the store (including bays 1-5) collapsed under the weight of the overlaying backfill. The collapse buried 14,000 tons of bombs (at the time, 14% of the RAF’s total stock!) including a 27-wagon train that was in the process of being unloading (records appear to make no reference to any casualties). This explains why of the surviving tunnel’s bays run from 6 to 11 on both upper and lower levels. The ensuing inquiry concluded the collapse was due to design faults and a subsequent failure to act when cracks appeared, just prior to the store’s completion. 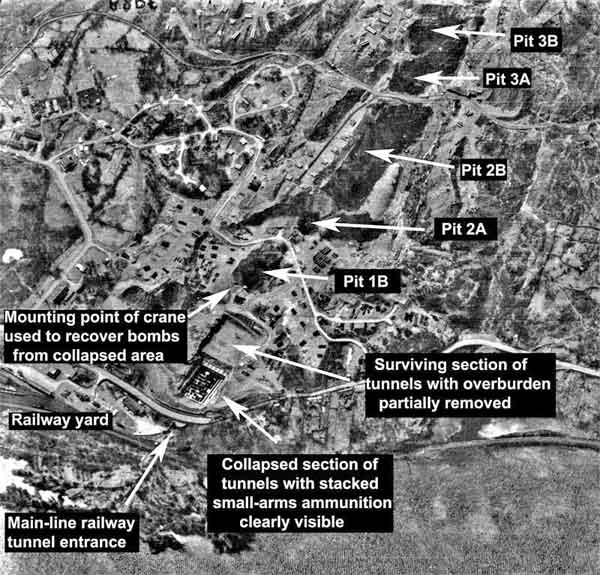 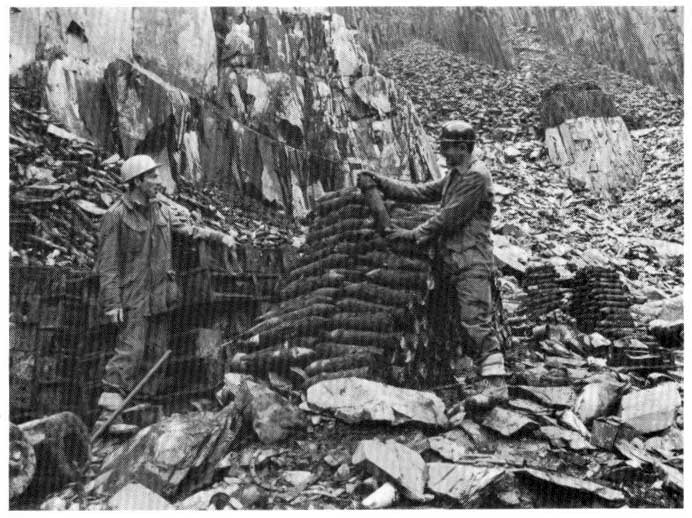 Although the majority of the bombs were recovered and the remaining tunnels cleared of debris, ammunition was not stored underground here subsequent to the collapse. The surviving parts of the eight parallel underground galleries were bricked off and abandoned. However, the now-cleared collapsed section, measuring approximately 60m by 100m (and 12m deep) and referred to as ‘the tank’ was used for open storage of incendiary bombs and other ordinance from June 1943, when the Royal Air Force School of Explosives moved into the site. The school use of the quarry area for the demolition and burning of explosives continued until after the war with their destruction programme including just about every type of bomb in the RAF’s arsenal. Also, immediately after the war, because of its secure storage and rail connections, it was temporarily used as a storage facility for 14,000 tons of bombs filled with tabun (a toxic nerve gas) which had been seized from German ammunition depots. These were transferred to RAF Llandwrog between August 1946 and July 1947. When the School of Explosive's programme finished in March 1955, all stock was removed, and the depot officially closed three months later in July 1956.

Despite leaving the site, the school’s legacy lived on, for the wrong reasons. Not all of the ordinance was completely destroyed, leaving parts of the quarry complex containing significant quantities of un-exploded items. When tossed into the quarry pits, many bombs failed to reach the quarry bottom, instead landing on ledges. Others ended up at the bottom of lakes where parts of the quarry had flooded.

During the 1960s, security at the quarry was frequently compromised. Illegal dumping took place and more critically, ordnance was stolen from the quarry pits. This led to an incident where several people in Anglesey were injured when an item stolen from the former RAF Llanberis detonated.

This led to a decision in 1969 to clear the entire site of explosives. The task was handed to RAF Bicester’s 71 Maintenance Unit EOD Flight in October 1975. This was no mean task with the unit having to learn how to lift tons of explosives from the quarry pits and lakes using special mechanical equipment. Hence, they very quickly acquired the skills of tunnelling and rock climbing as, initially, these were the only ways of gaining access to some of the pits and their surrounding ledges.

This was one of few bomb disposal tasks carried out by any of the service where members of the unit were instructed by a Mountain Rescue Team. Over the space of six years EOD Flight, with logistical help from the Royal Engineers and Royal Navy divers in the lakes, recovered tons of incendiary and high explosive bomb. The divers had earlier confirmed that one large lake was littered with explosive items including a number of large bombs. Hence 200-million gallons of water and sludge were pumped out and when finally drained in April 1973, it took a further two years to recover and dispose of the freshly revealed-ordinance. By the end of their assignment EOD Flight had removed 85,000 tons of slate and debris and recovered and disposed no less than 352 tons of explosives items. Rather worryingly, an official document stated that one member of the 1970s clean-up team was injured by mustard gas. The MOD later confirmed that several mustard gas bombs were found there during the clean-up operation.

In May 2015 Zetica delivered a detailed UXO Desktop survey and Risk Assessment for the site for their client Quarry bank. It makes interesting reading and gives a detailed analysis of the 70s clean-up operation. The full report is HERE. In February 2017, Snowdonia Pumped Hydro (SPH) had hoped to build a pumped storage facility at the former quarry in Llanberis, but it never went ahead. Since then the site has remained empty and abandoned.

2. The Explore
I know this place has been done to death over the years but given it is a pretty unique place with an interesting (if not slightly disastrous) history I thought I’d give it a look. After the 40-or-so minute drive from where we were staying, I arrived at the place with no access info. I parked up south of the store and walked over what looked like to be a former carpark. I soon arrived at the rim of the tank and headed to the eastern corner where it was a scramble down a slate bank on the lower level. Fortunately, the only door in was unlocked and I had the place to myself. The main issue was that I’d left the battery charger at home for one torch and my Lenser had got switched on over-night in my bag. Not great in totally pitch-black tunnels. Step forward the torch on my phone. And although it took a bit longer, fortunately I still managed to get enough decent-ish pictures of the interior. So, an enjoyable way to spend a couple of hours of my time and still worth the visit if you are in the area.

First view of the tank: 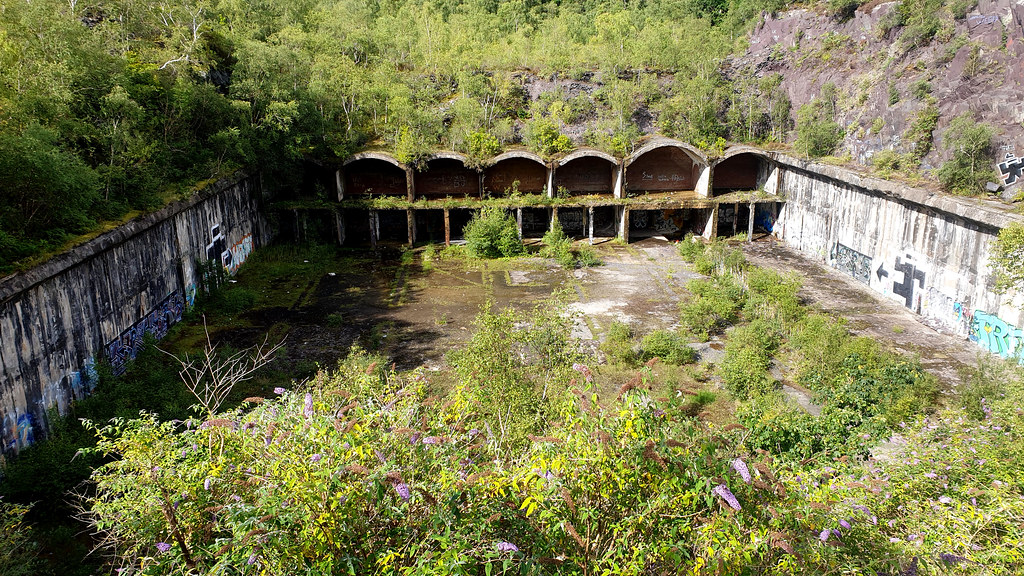 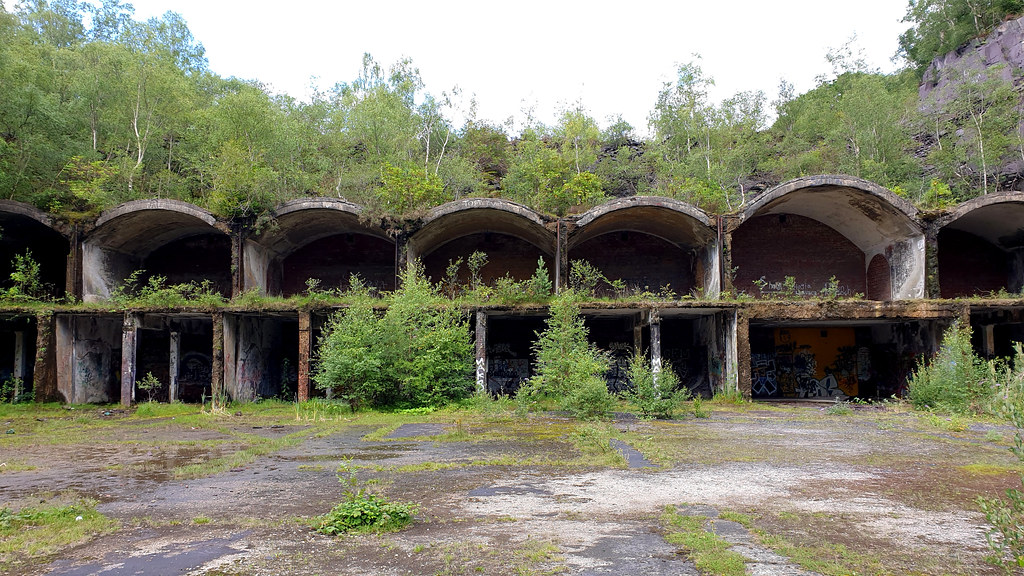 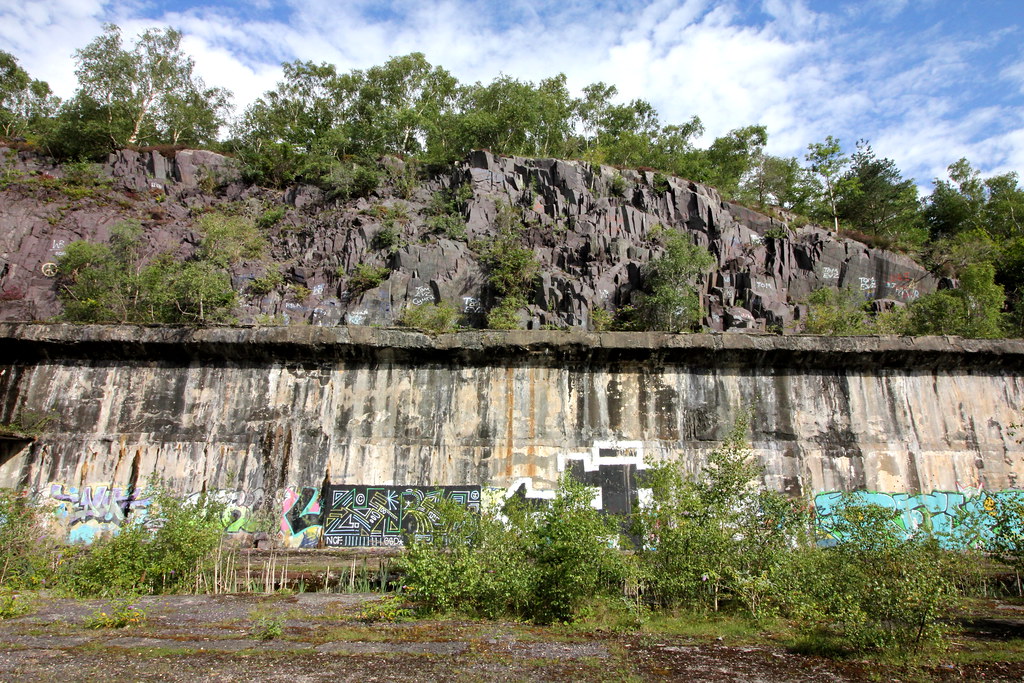 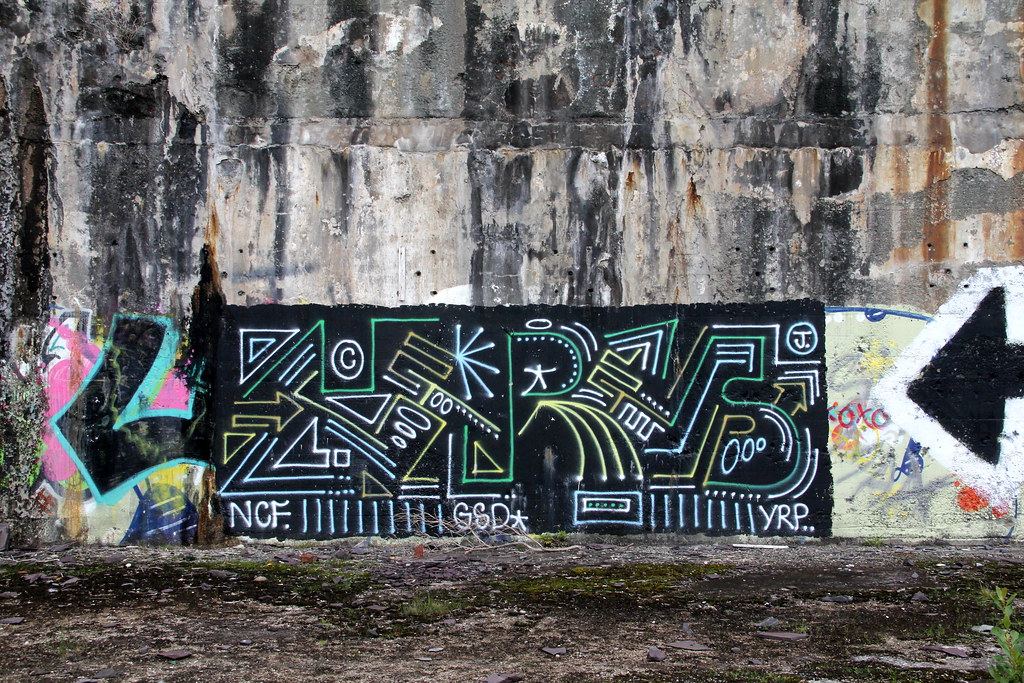 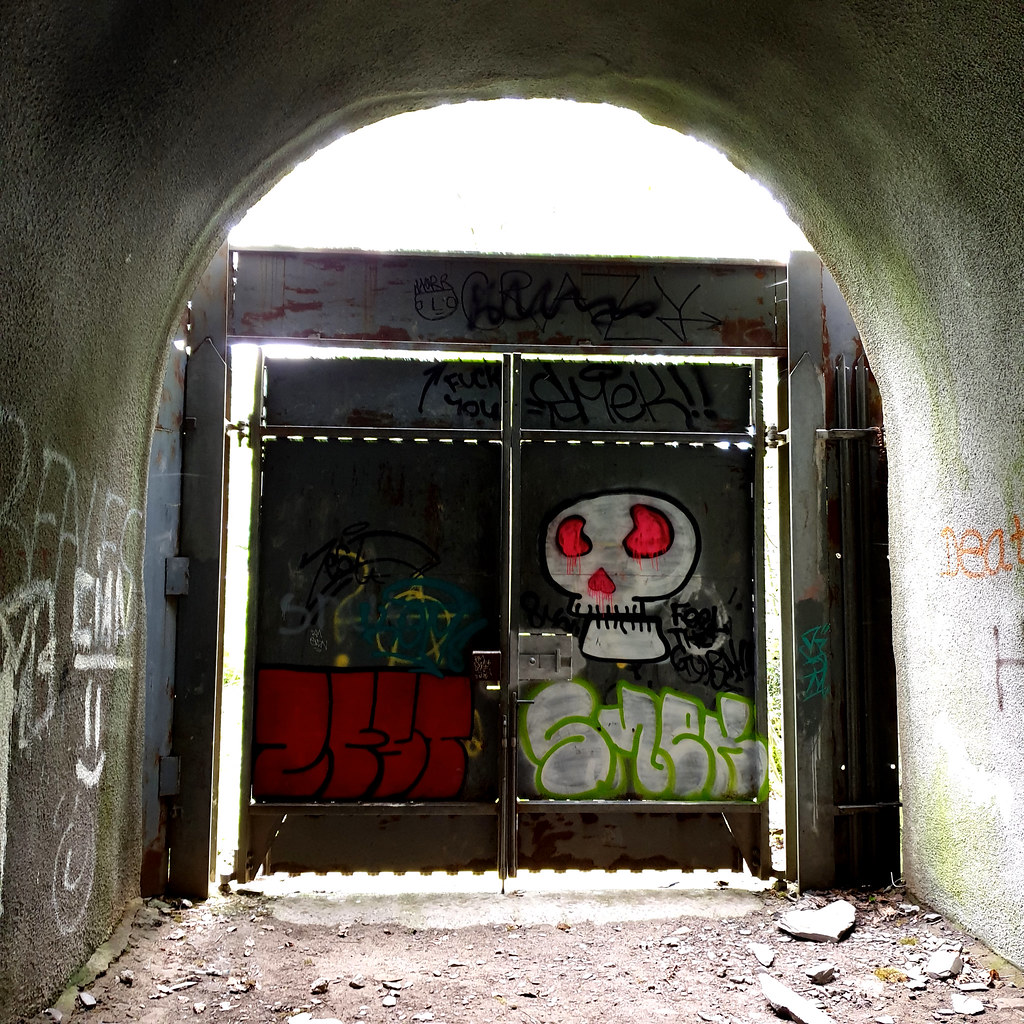 And the standard gauge railway tunnel: 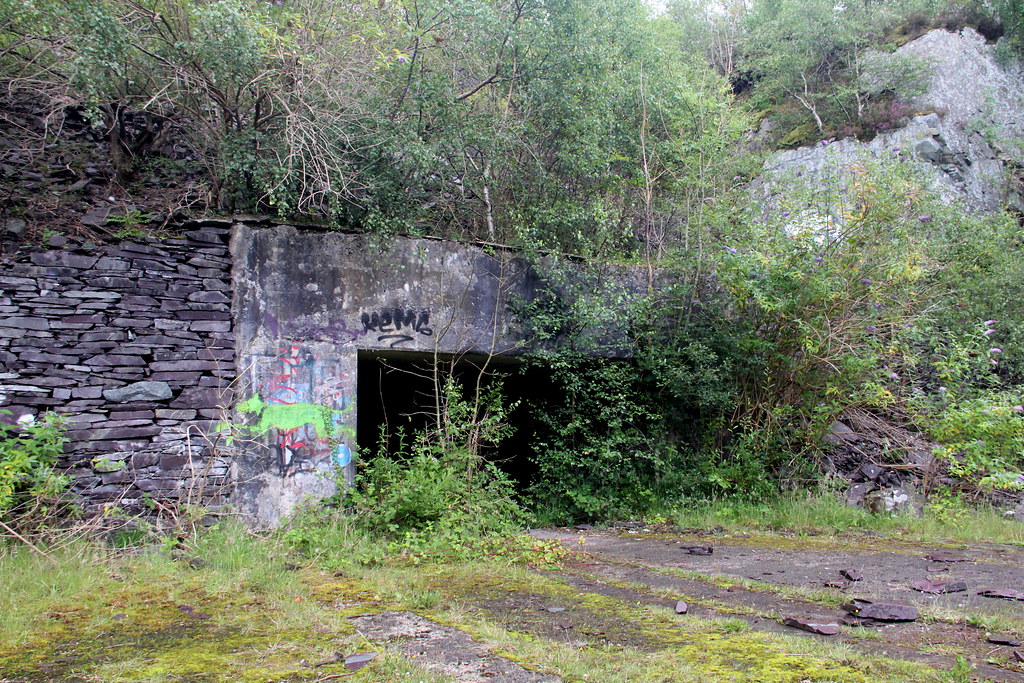 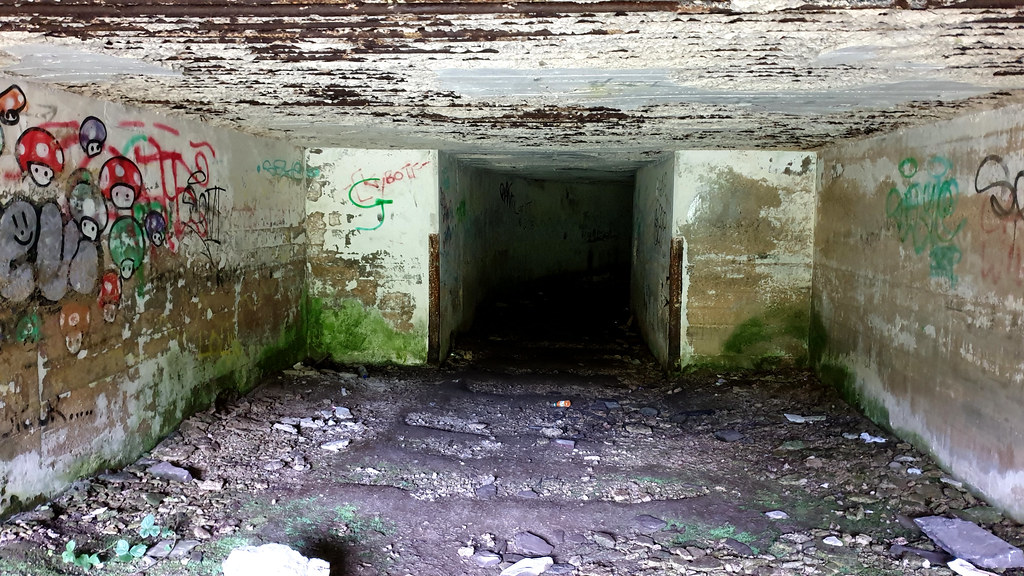 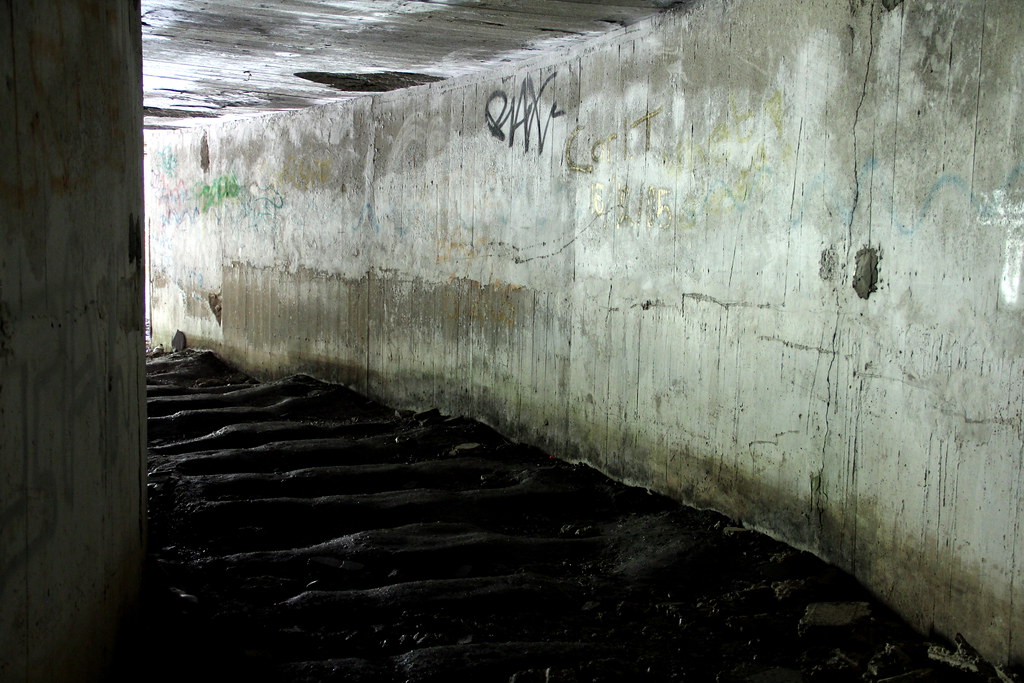 So on to the remaining underground section: 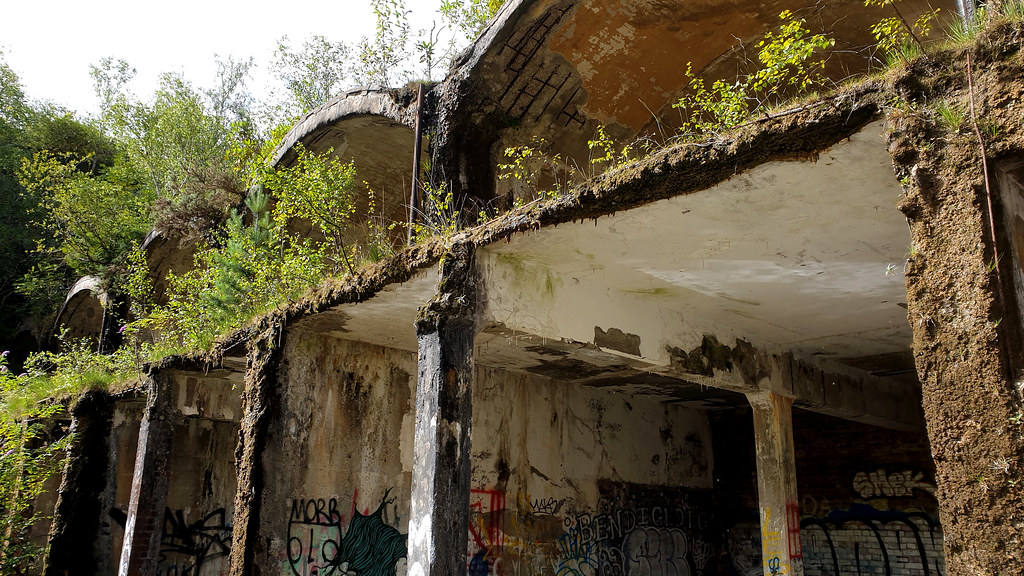 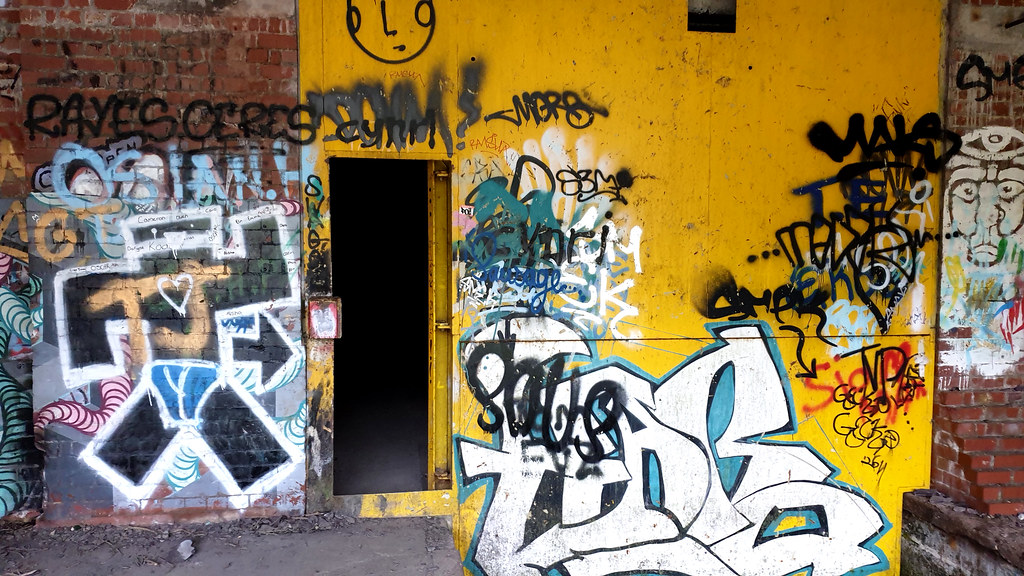 Looking out across the tank: 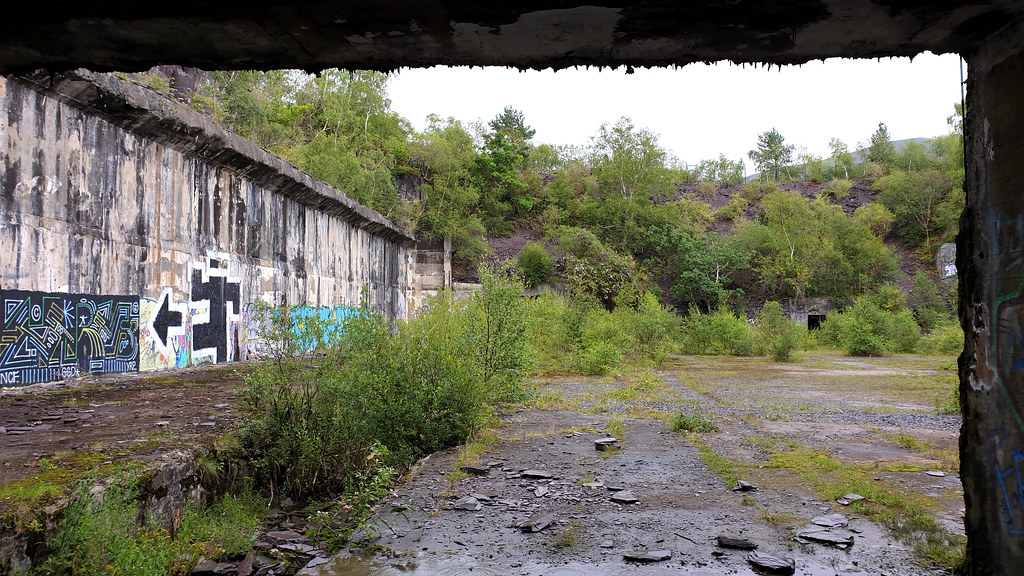 Square doorways on the ground floor: 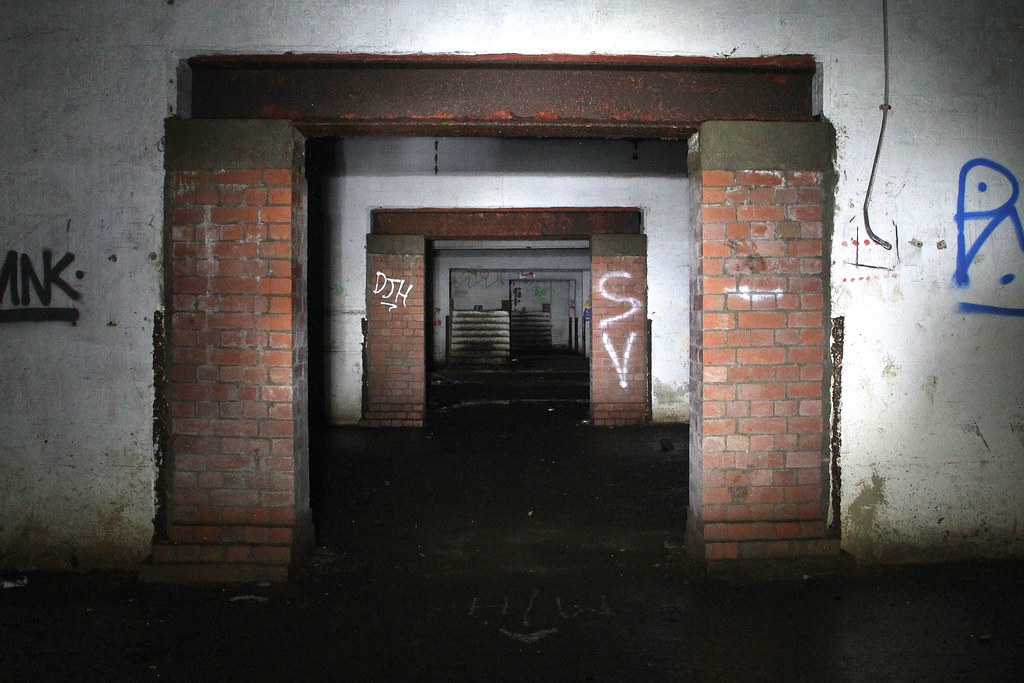 The ground floor concrete support pillars for the ceiling: 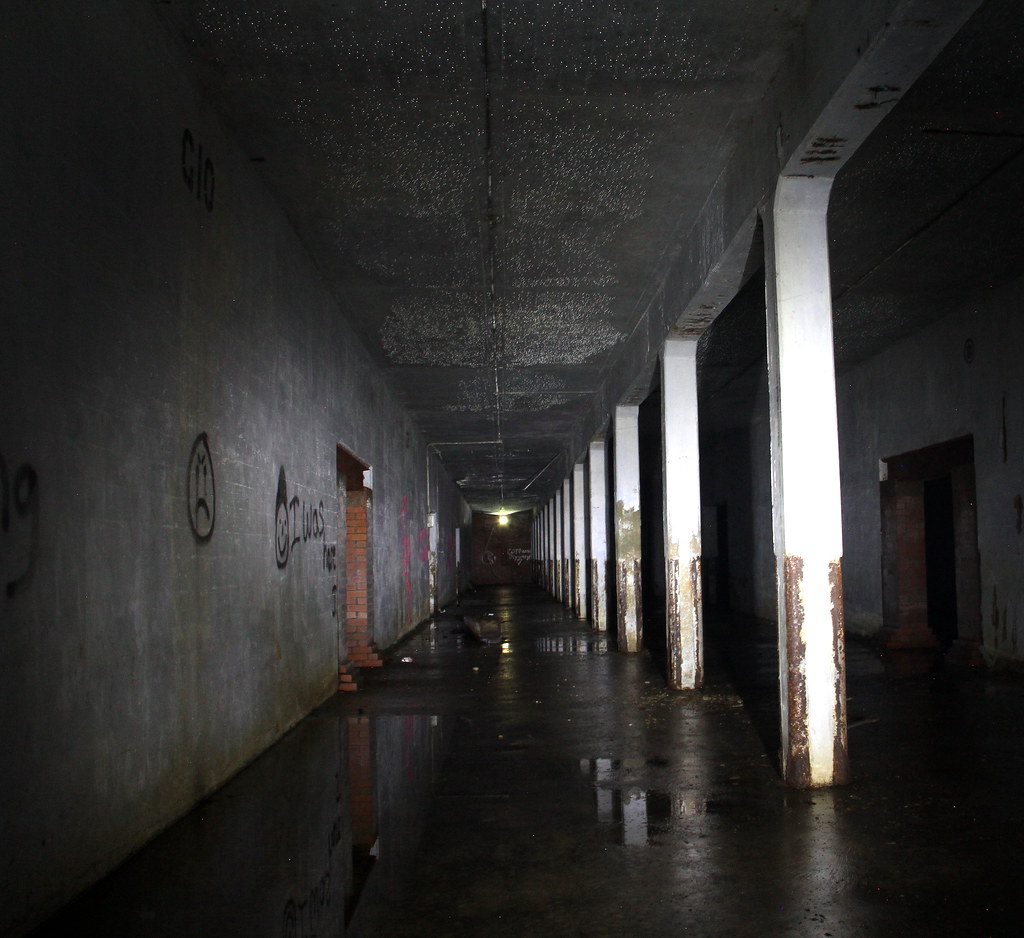 Some half decent graff: 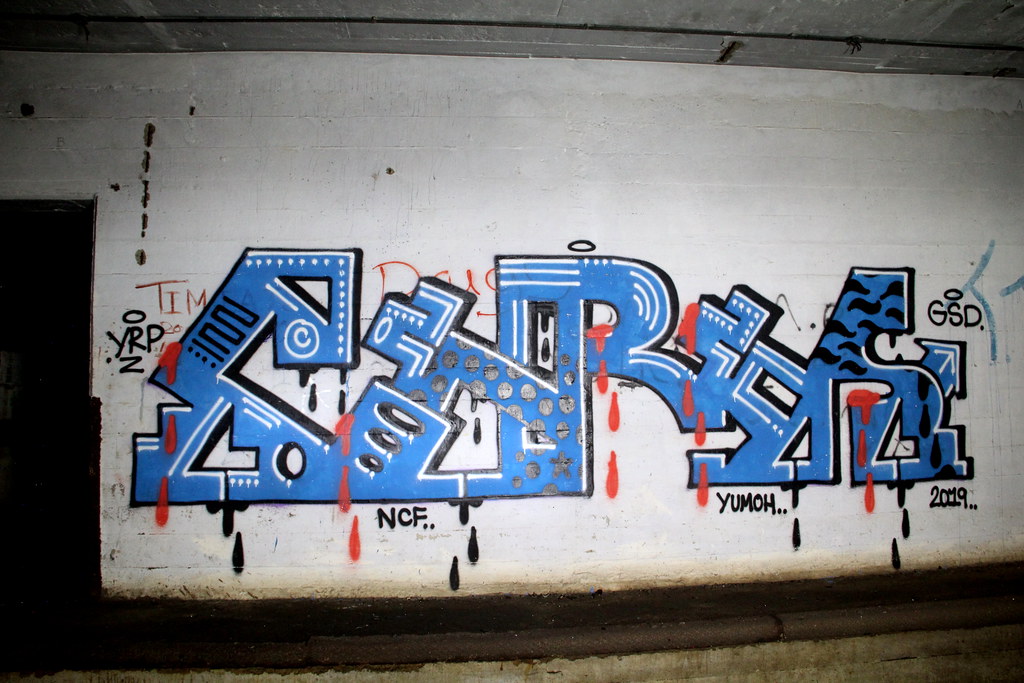 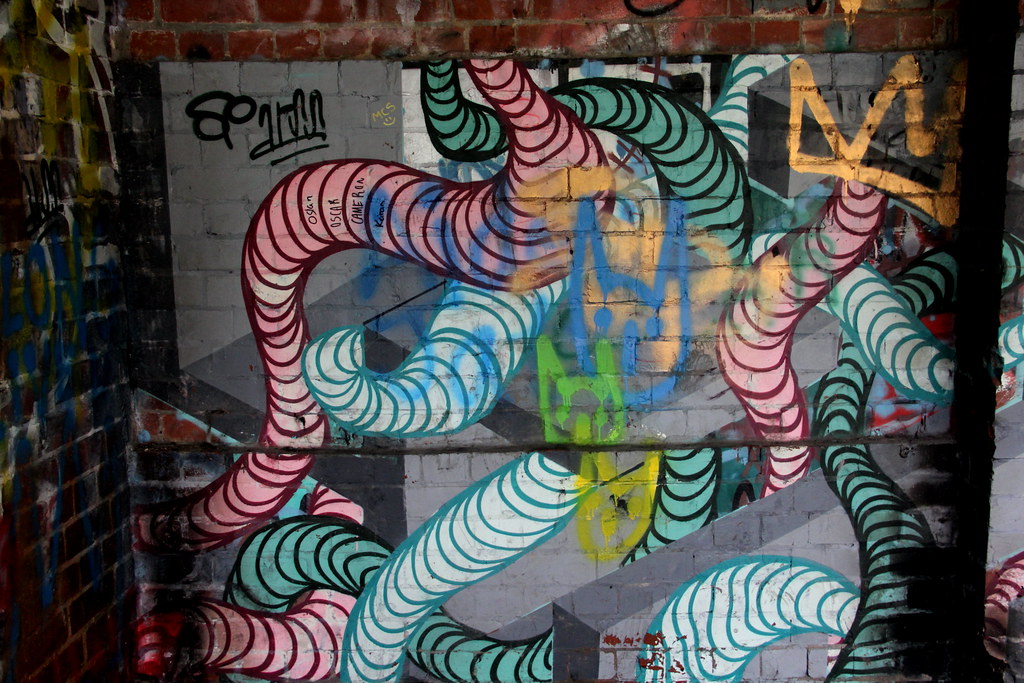 The southern tunnel is locked but still ‘accessible’. Call me a chicken, but I didn’t really fancy it: 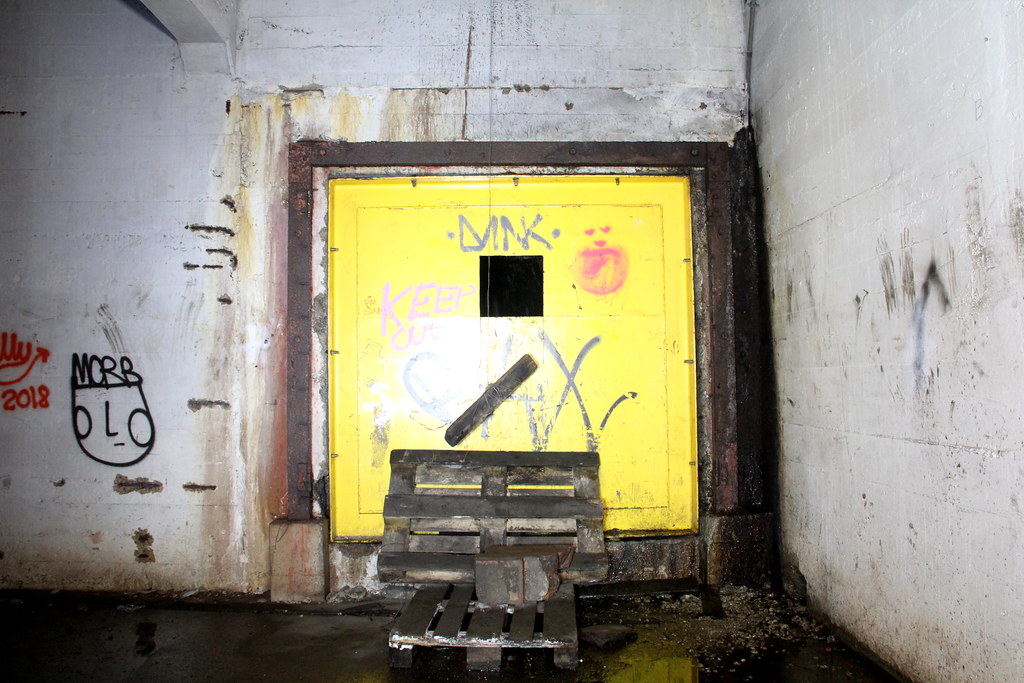 Up onto the upper floor via the staircase at C11: 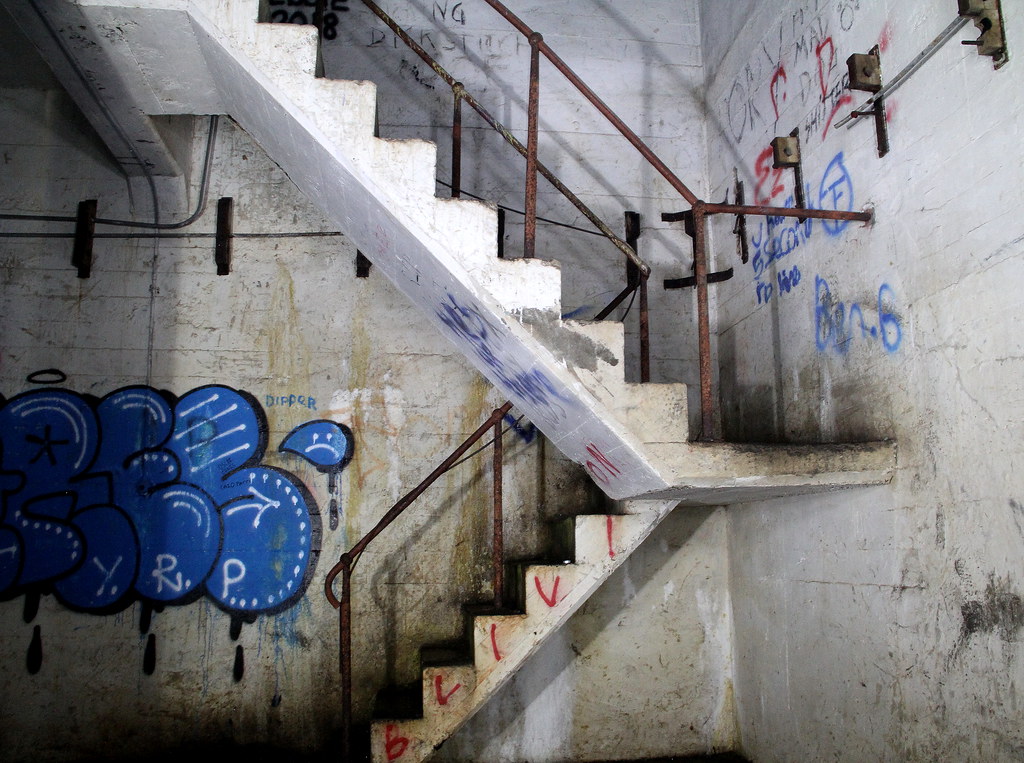 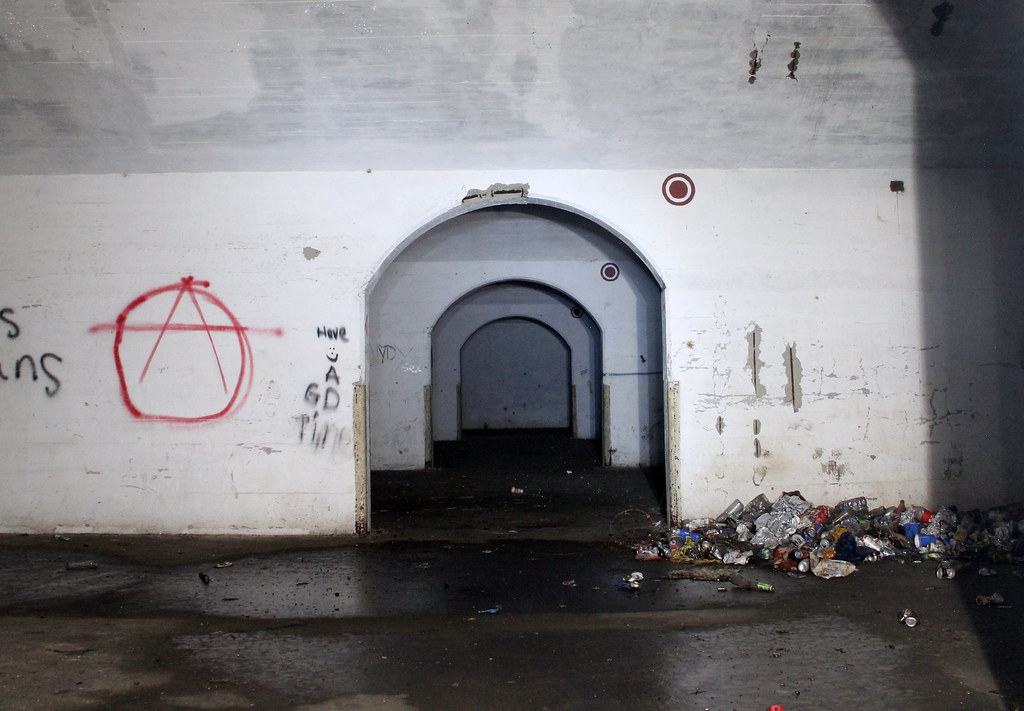 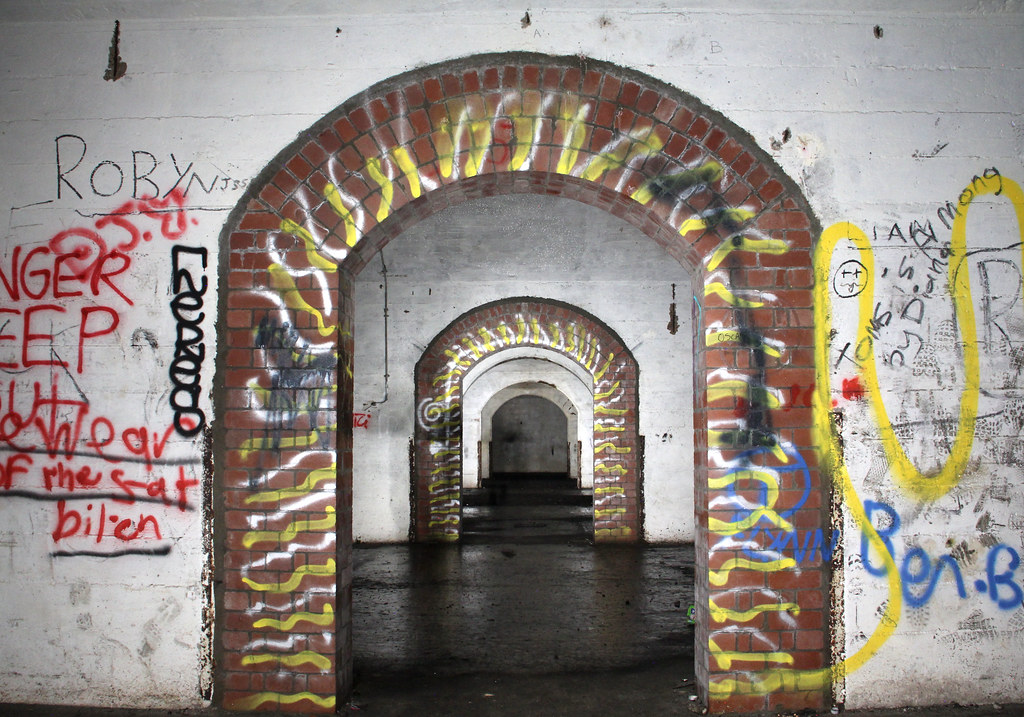 The lift on gallery M at M9: 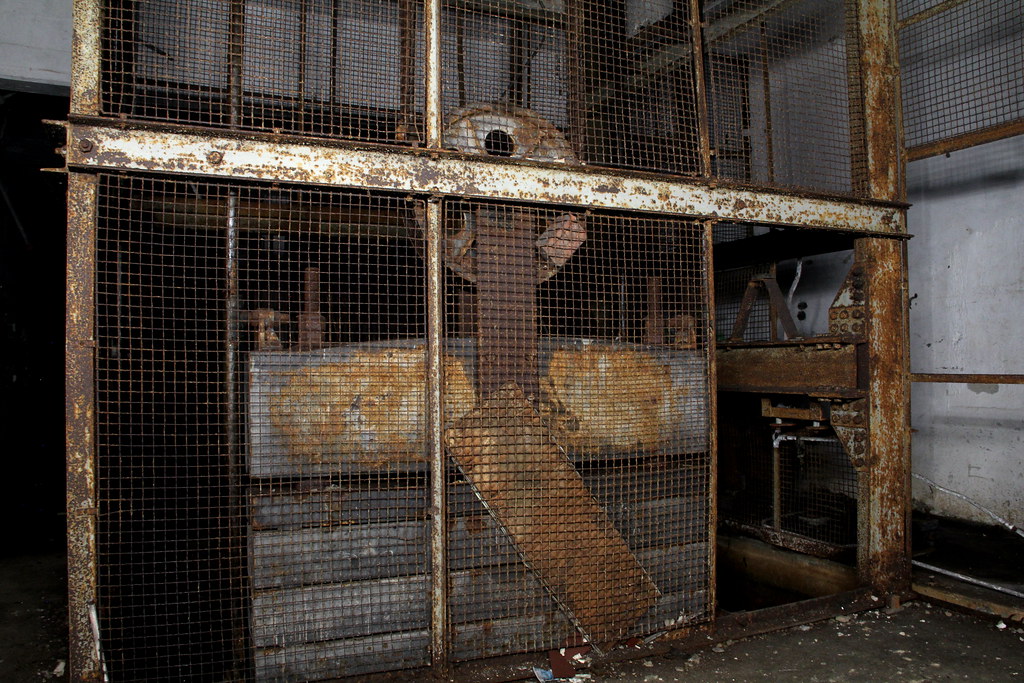 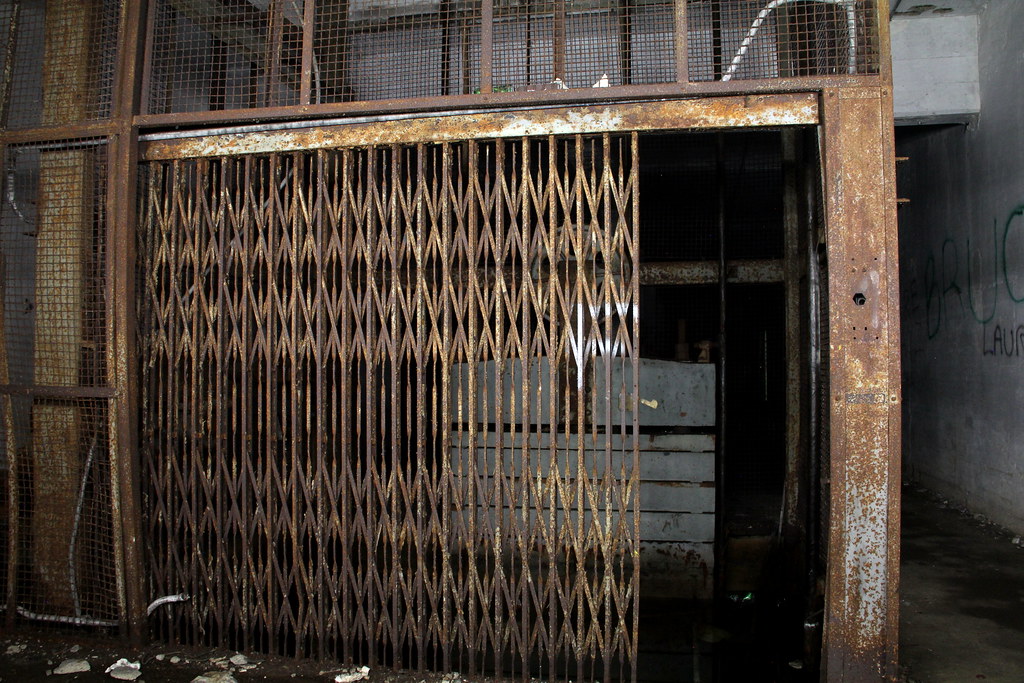 And the lift at M6 (note brick retaining wall): 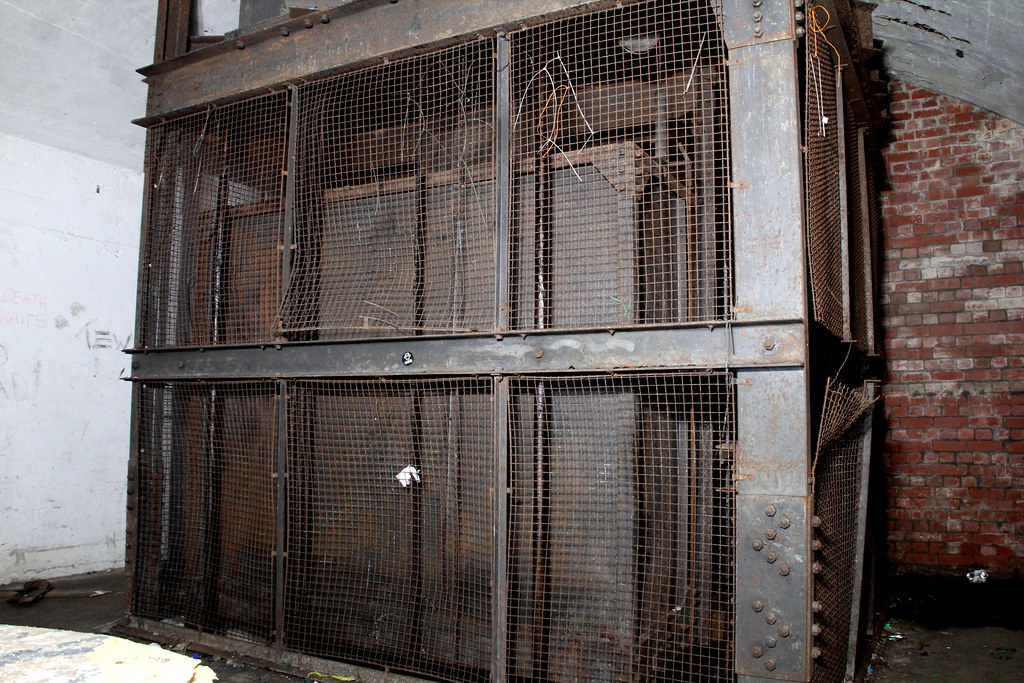 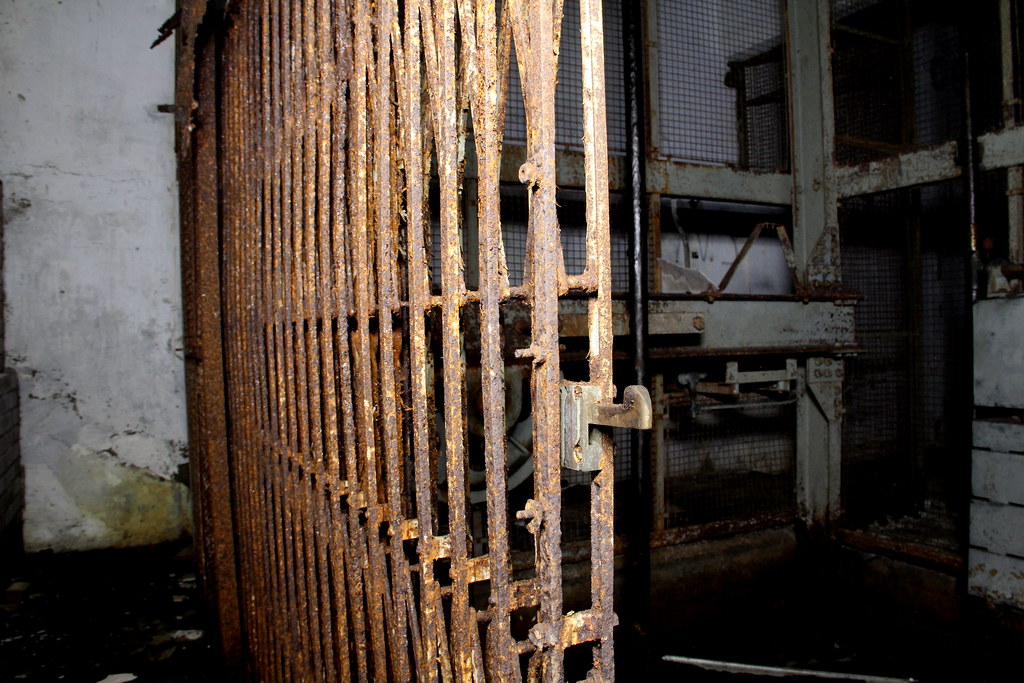 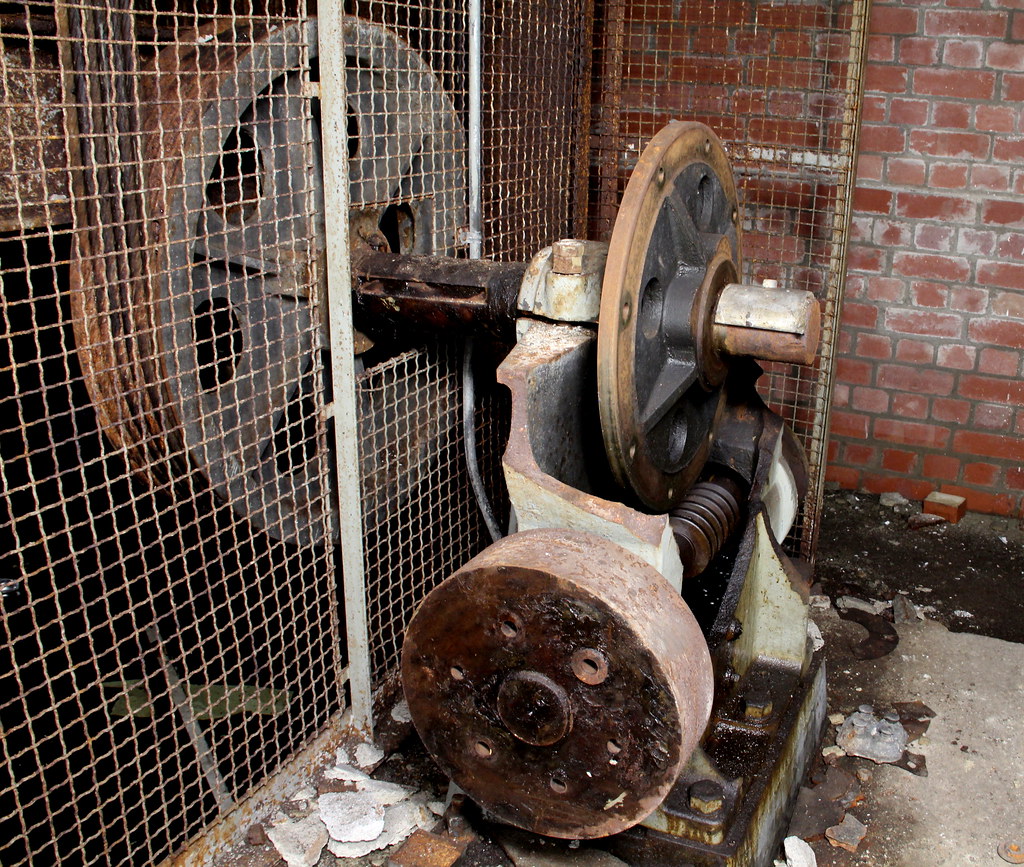 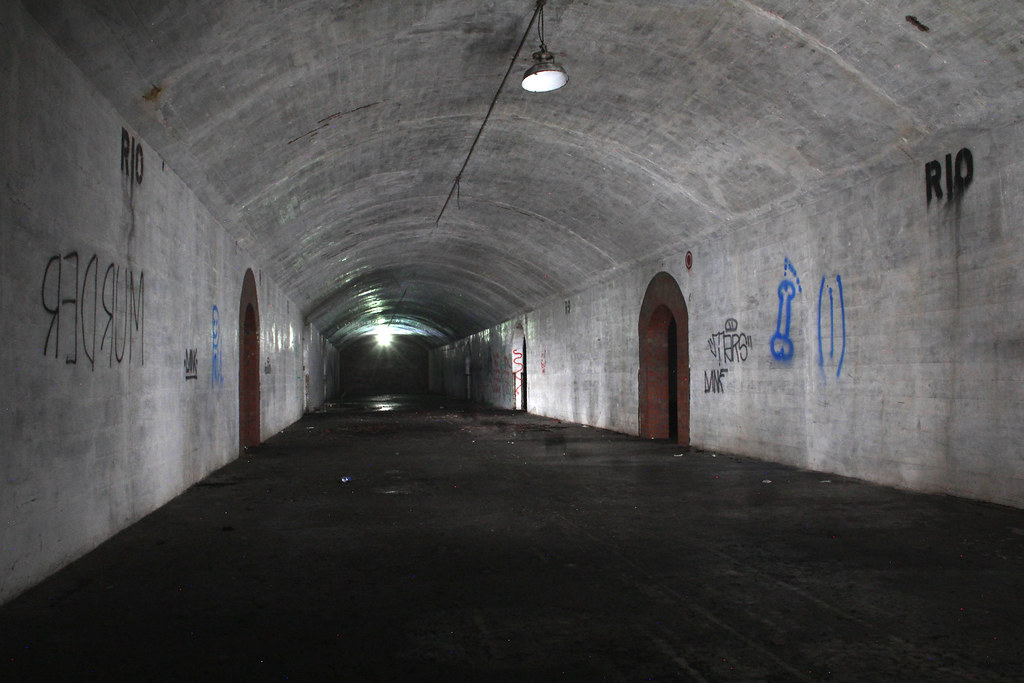 And the far corner of the upper floor at R11: 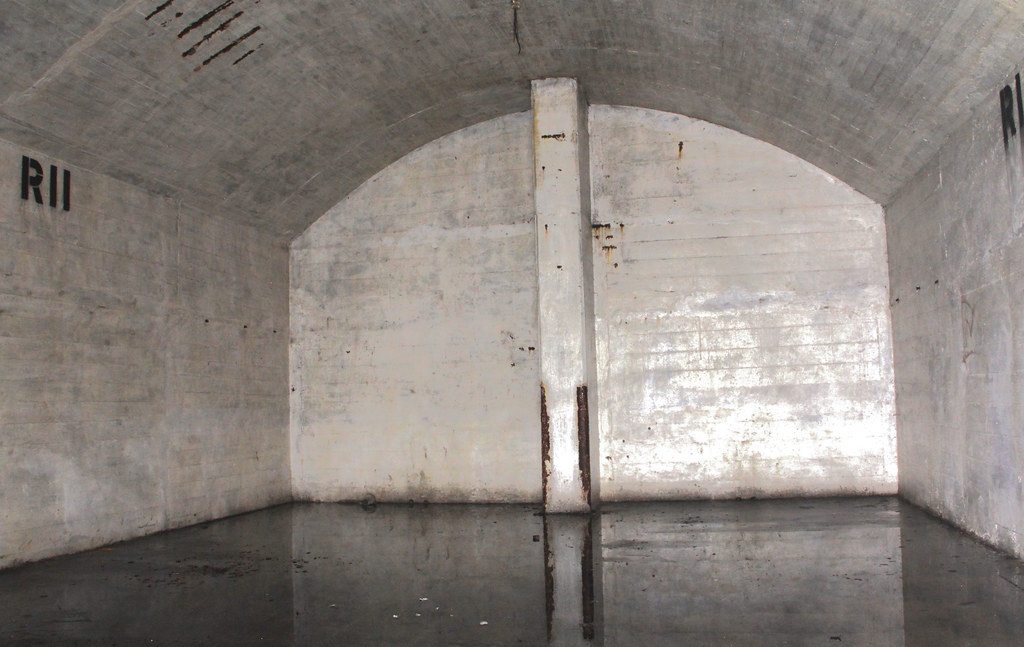 28DL Full Member
Always nice to other peoples photos of this place.
https://www.youtube.com/channel/UCuM1emnLLP6kjjVePijNFSw

Regular User
The southern tunnel I didn’t bother either mate I could of got in but god that steel would of bruised my back of my knees didn’t fancy it lol , I left my bag here with spare torches in done dinorwic quarry came back and they was still here after doing that place the slope down to this felt like just stepping into a car lol
I am just developing the mine by improving access

28DL Full Member
I love those archive shots, great stuff as ever HD!

Regular User
Impressive on a phone light! Looks like the graff has increased last few years. Funny they made all that effort to seal it up then lasted all of about 3 months before it was prized open again.

Defo got to get myself up to Llanberis before end of summer.
Website: www.whateversleft.co.uk - County Asylums: www.countyasylums.co.uk​

Regular User
Fantastic report. So much detail, very comprehensive. loving the maps & photos. Plenty to still see. Liking the curved door shot and the R10 shot. Just so much right with this, winner

Regular User
I've never properly read up on this place until now, its good to actually understand it a bit better. Nice report and pics.
https://analogparalysis1978.com​

tarkovsky said:
I've never properly read up on this place until now, its good to actually understand it a bit better. Nice report and pics.
Click to expand...

Cheers mate. Once you read the history it all makes more sense. I didnt even know the tank was a collapse before I went. Wished I'd researched it before I went.

Regular User
NIcely done, but u missed all the lovely pencil drawings etc!
Stop The Planet, I Want To Get Off!
C

28DL Member
Smashing revisit - and a nice roundup of the history which ties in to an evening spent with my wifes friends other half ,who regaled me with tales of being involved with the clean up (he wasnt military but think he was with ICI or someone )there in the late 70,s or eighties not sure which ! I always wondered if he was making some of it up but apprently not !!

Cablecutter said:
Smashing revisit - and a nice roundup of the history which ties in to an evening spent with my wifes friends other half ,who regaled me with tales of being involved with the clean up (he wasnt military but think he was with ICI or someone )there in the late 70,s or eighties not sure which ! I always wondered if he was making some of it up but apprently not !!
Click to expand...