28DL Member
An amazing place to explore with two main areas, one above ground in the old slate workshop and the other inside a mine. The locations are part of the Talwaenydd quarry which covers a large area however the most interesting section is located in the East section around 2km North East of Blaenau Ffestiniog town. The site has existed since around 1800 and was abandoned in 1998 (if you want more infomation https://www.festipedia.org.uk/wiki/Maenofferen_Quarry ). I chose this location as i saw it on a post by Exploring with Bob (https://www.28dayslater.co.uk/threads/maenofferen-slate-mine-blaenau-ffestiniog-november-2017.110676/) i would definitely recommend checking it out.

This is the main mine workshop which is abandoned however there are still tours that take place in which small trucks travel round, it seemed like they came round every 2 hours but they didn't go inside the workshop luckily as i was hiding inside at one point.

There was a lot to explore in the top section around the large workshop building and in the surrounding area. Could have spent a fair amount of time up here but I was very eager to go underground into the tunnel network.
Finding the mine entrance wasn't t too difficult as if you look around just further up from the workshop you'll find an enclosed area covered up by some waste slate heaps.

This appeared to be the old mine building in which the carts were once transported from, it had started to be demolished or refurbished as there was no way of entering the building.

opposite the building was a steep decent into the mine, there was nothing to really hold onto on the way down and when wet it can be very risky trying to get down but not impossible if careful. Following the route down into the entrance, old tracks left abandoned lead the way down the mine.

Sorry about the poor quality image, but it shows how steep the decent is. around 40m from the bottom there is an opening leading to the tunnel system.

At the very bottom of the slope there was a route over some water with tires to step on to get across. This was the first of many pieces of machinery inside the mine, at the bottom there is a large chamber with a lot to see. I chose to follow a route up a makeshift slate staircase that lead to the tunnel system i mentioned before.

Deeper into the mine I came across another decent into a lower section of the mine, the path lead on for a long way further...

Very deep into the mine i found this section of the mine which i presumed was the last to be used in production. The area had a number of interesting things to see and there was even a working point system. 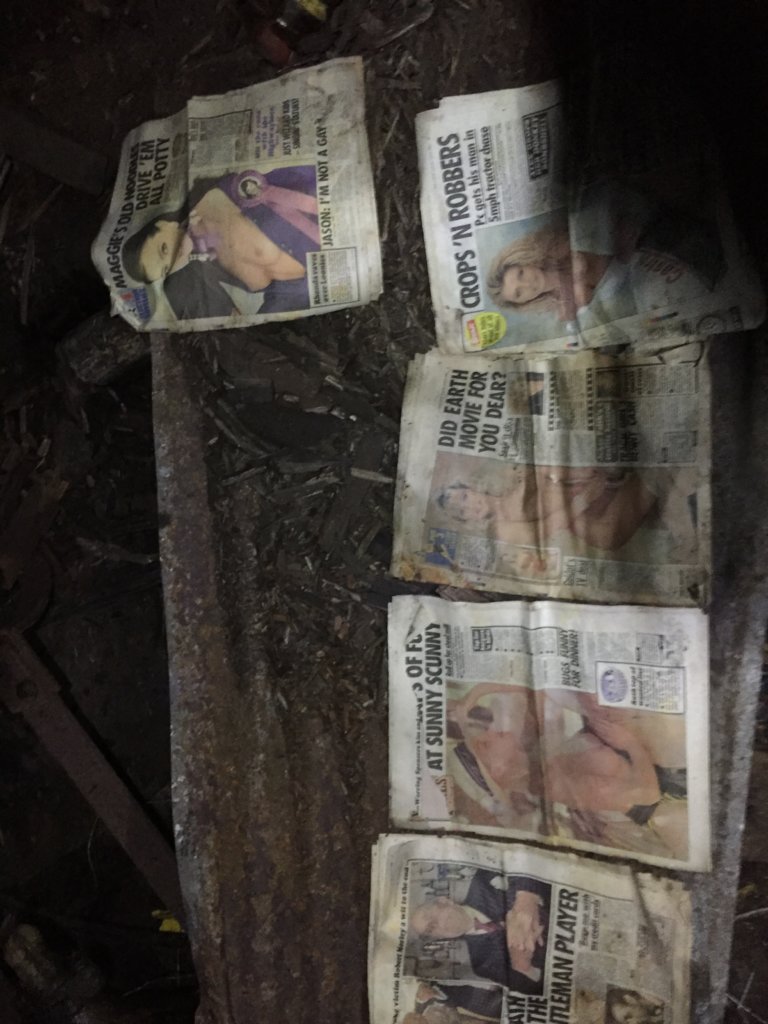 I considered turning back at this point but had already gone far enough not to care about going deeper, I figured that there probably wasn't too much past this doorway but I was wrong!!

I came to a section of tunnel surrounded by corrugated iron

Following the path down further all i found was the similar but older looking tunnels, i followed them for another 20 min but then decided that i should turn back before i forgot the way back

I was pretty happy to have made it back to the entrance to the tunnel.
Message me if you want to know any information about getting to the tunnel

28DL Full Member
Get yourself a tripod, works wonders for underground photography.

28DL Full Member
Ugh the place looks even more trashed than last time!!!
We must be as stealthy as the rats in the wainscoting of society.

Regular User
It’s a good place to mooch about with plenty to see.......I’d ditch the pp3 if I were you and get a hard hat instead.
There’s nothing down there or pretty much any mine I’ve visited that needs a pp3 mask.
.
.

Staff member
Moderator
Some alright things there, as miney things go.
My Website -> Behind Closed Doors

Regular User
Liking the rock formation on pics I can see it. also Ive a weakness for machinery. Good effort. Huge site.

28DL Full Member
Heres a map so you don't get lost

I know the quality is awful, I can just about read my full-res picture.

Regular User
The winch house is being restored, Its a cracking mine and it looks like you've covered a small amount of it so far, lots more to see still

They're running tours into the mine itself at the moment for the public, they know we all explore it and seem quite cool about it at the minute, we met the tour guide on our last visit and he was friendly enough.

As long as we dont fuck around in their or cause them trouble it should stay that way, this mean being careful who you dish out info too, make sure they're responsible and take the right kit, decent torches etc, last thing we need is aload of kids or wanna-be-famous no idea youtube pricks baiting it out & getting it closed up.
http://urbanmonkness.weebly.com
t3emonk@aol.com

28DL Full Member
i believe there are tours taking place this year, started around april time if i remember right, we have visited it a few times slept in the sheds first time round, still not seen it all, but we've been as deep as you can get, few eggy area's too.

Is there a few bacony areas to go with it?

hahaha cooked on a slab of slate over an open fire was actually pretty nice and made toast too!

Regular User
Agree with some of the comments regarding torches etc, but still good effort. Lovely area this!
Blurred Boundaries - 'busting Bristol wide open' - Louise 2012
SERVE CHILLED, LIKE SOMERSET
"I just have you saved in my phone as Mail Rail guy"​

I know the quality is awful, I can just about read my full-res picture.
Click to expand...