28DL Full Member
As it's now been at least two days since there's been a report on Newsome Mills, I thought I'd finally get mine put up.


When the chance arose for me to take a day trip to HudDERPsfield with Fudge as my tour guide, I was on it like the proverbial. On the itinerary were two buildings, both with the added bonus of rooftop viewing opportunities. The weather was fine, which for Huddersfield is a rare treat.

Our first stop on this sightseeing extravaganza was St Peter's building in the town centre. We didn't stop long as I'd only paid for one and a half hours parking at a cost of fifty pence, so it was a case of get to the top, take some piss poor photos and then search for door number 28 on the way back down. There'll be no report from this visit here, although I dare say a nighttime visit is on the cards at some point. 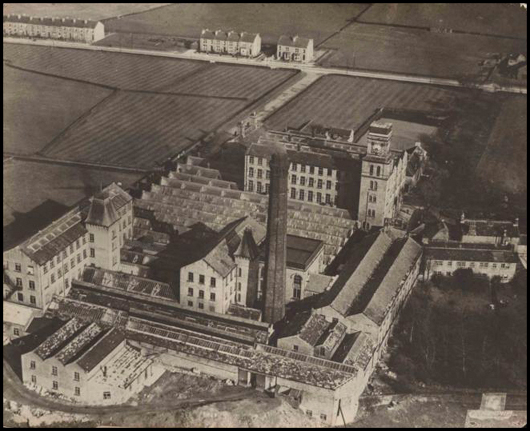 The mill was founded by John Taylor in 1827 and was a working woolen textile mill right up until 1983.
...
This building was constructed in the 1880s, and replaced an earlier mill building that was lost to fire in 1872.
...
The mill is most familiarly associated with the firm of Taylor & Littlewood, formed in 1873 when Ephraim Beaumont Taylor went into partnership with Joshua Littlewood. Under their management, Newsome Mills developed into a â€œSplendid block of buildings, mills and weaving sheds of great extent and admirable arrangement.â€￾* All cloth manufacturing processes were carried out on the site â€“ starting with raw wool and ending with the production of fine worsteds. There were 200 looms and 600 employees making trousers, coats and woolen goods.
Click to expand...

This building has been on my 'list' since before I even had a list. Around 10 years ago, before I'd ever heard of UE, I spent a short time living just a quarter of a mile from this place. Being a fan of historical architecture, I would admire it often. It's position atop a hill overlooking Huddersfield town makes it a well recognised local landmark, visible from many parts of the town.


View of the mill building from atop another local derp, St Peter's building in the town centre 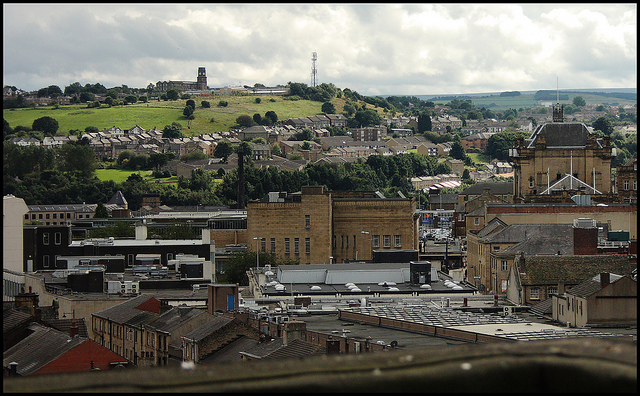 The mill is well loved in the village of Newsome, having provided employment for many generations of locals over the years. Much of the site including a large block of weaving sheds, boiler house and a rather nice chimney have long since been demolished, leaving only the main four storey building, clocktower and a couple of smaller admin buildings. The remains are now grade II listed and there is a campaign within the local community to save them from further damage. Ultimately, there are plans in place to convert the building in to apartments.

As already mentioned, I've had a 'thing' about this particular building for a number of years, so I was really looking forward to this. I wasn't disapointed. 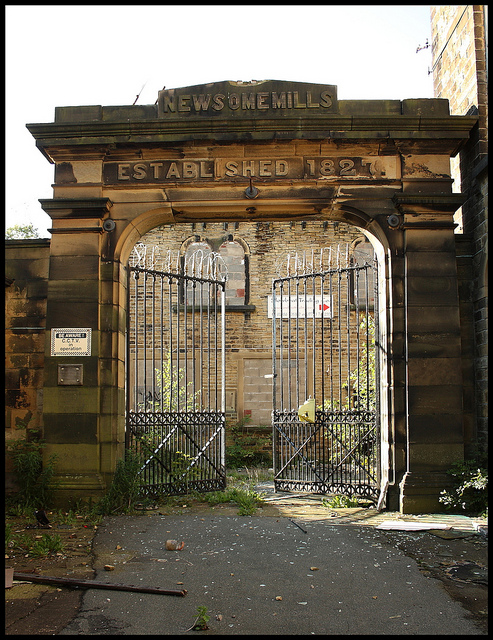 One of the spinning floors 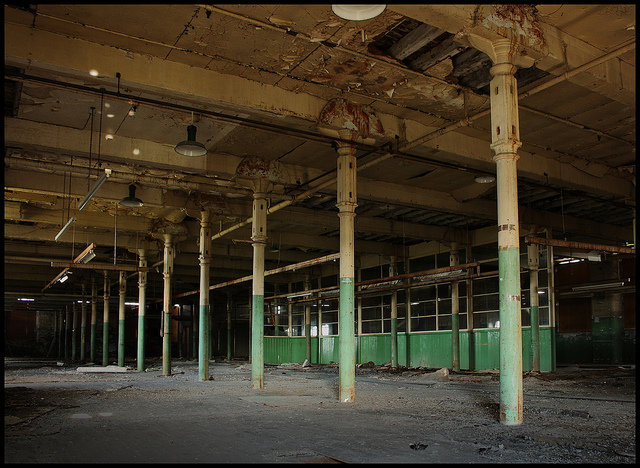 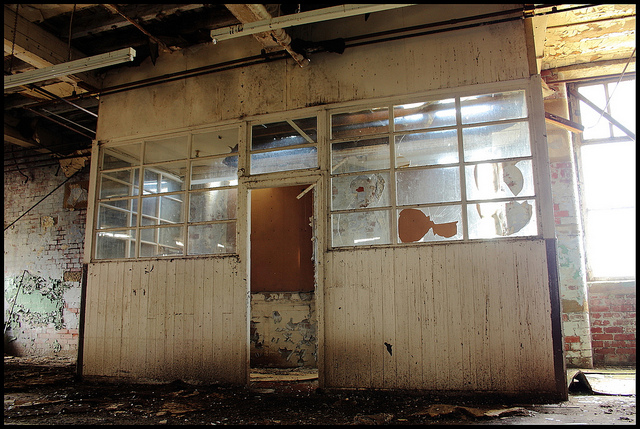 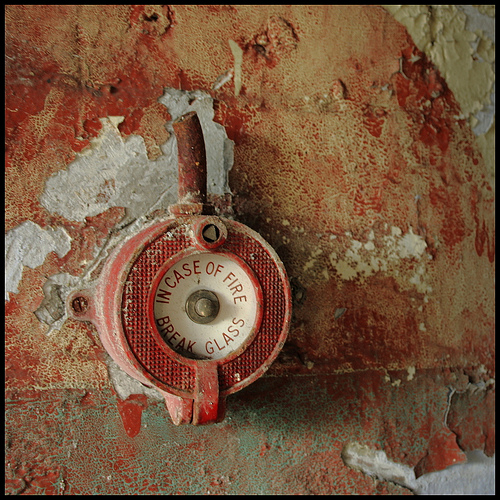 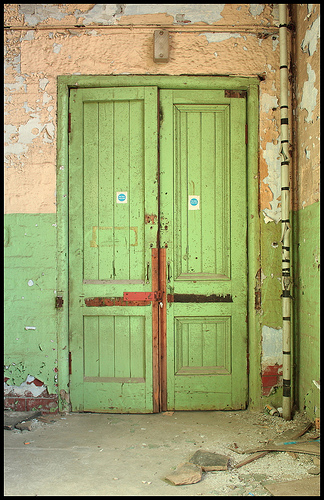 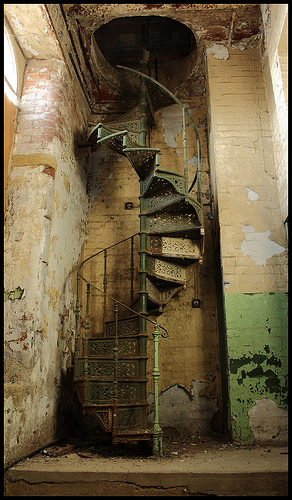 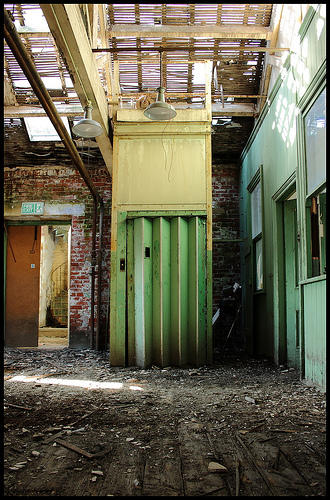 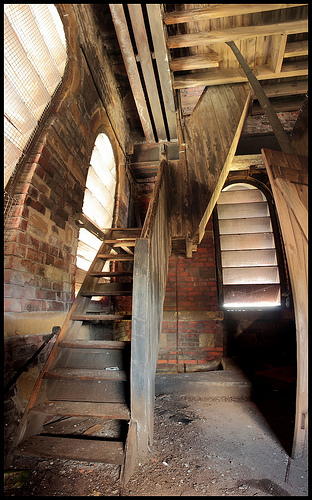 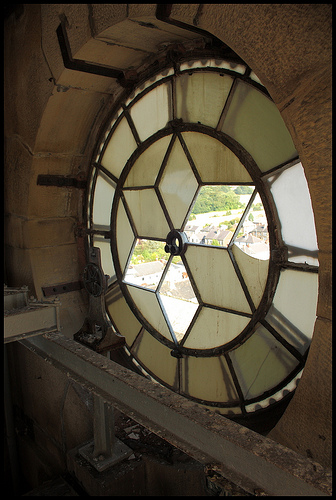 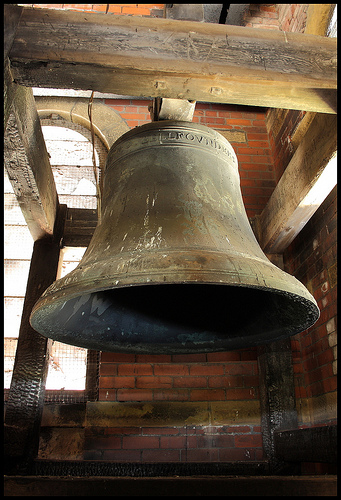 The view from the top

Many thanks to Fudge for accompanying me round the same old sites he's done a million times before. Cheers pal