28DL Full Member
This is the old site of the Salvation Army in the centre of Sheffield near the John Lewis car park.

In 1892 plans were discussed for the purchase of land and the erection of a 'commodious building,' culminating in the site at the corner of Cross Burgess Street being bought from the Corporation by the Army for the sum of Â£7,812. This was regarded as an excellent investment by the business fraternity of the time. On September 12th, 1892 the Foundation Stone was laid by Mrs. Bramwell Booth and the impressive building was opened on January 27th, 1894. Thus began over 100 years of almost unbroken service on this famous and much-loved site.

The total cost of the work on the corner site was about Â£25,000 of which only Â£7,500 was used in the erection of the Citadel itself. The rest was spent on the building of the shops on Pinstone Street, which was to become one of Sheffield's main shopping areas (Incidentally they still own quite a lot of the land in the city centre). There is 'SA' lettering which can still be seen in the stonework above the shops.

The new hall had a seating capacity of 1800 and in many respects resembled a theatre, with a tiered platform at one end and on the other three sides a groundfloor, gallery and a top balcony. The platform could be seen and heard from any part of the building. The walls were sage green with a deep maroon dado. The floor was paved in mosaic style. The ceiling was panelled and finished with specially prepared paper and the walls and pillars - as you might expect - had a lot of yellow, red and blue in them. There were also plenty of downstairs rooms.

Despite the major renovations of 1957-58, the building at Cross Burgess Street was starting to show it's age and maintenance was continuously needed. The early 1970s were marked by discussions as to what should be done. Several options for alternative premises were considered and rejected. As well as questions about if we should refurbish or move, the cost of either option was substantial.

By 1992 the situation was becoming critical and a detailed study was made of the existing building, showing the large amounts of money needed. Whilst recognising that the building no longer met the future needs, many were emotionally attached to this site which had such a significant history.

Eventually the Salvation Army moved to new premises in 2000, and the building has been empty ever since. There have been many plans to convert the building into a pub/club (rejected as the licence was too restrictive), and now a shopping arcade, whilst retaining the original Grade 2 listed features (hopefully!). The building will need a lot of work doing to it owing to water ingress from the badly maintained roof, but it is still generally sound - no chav damage thankfully. What with the work starting up now, I don't know how good access will be - there has been a lot of coming and going of "Yellow Jackets" over the last few weeks - I was hoping I going to get some more shots before posting this but I've waited enough...

OK, so on to the pictures - I apologise profusely for any flash used in the dark bits. Most photos haven't needed flash, like in the main auditorium, so enjoy! 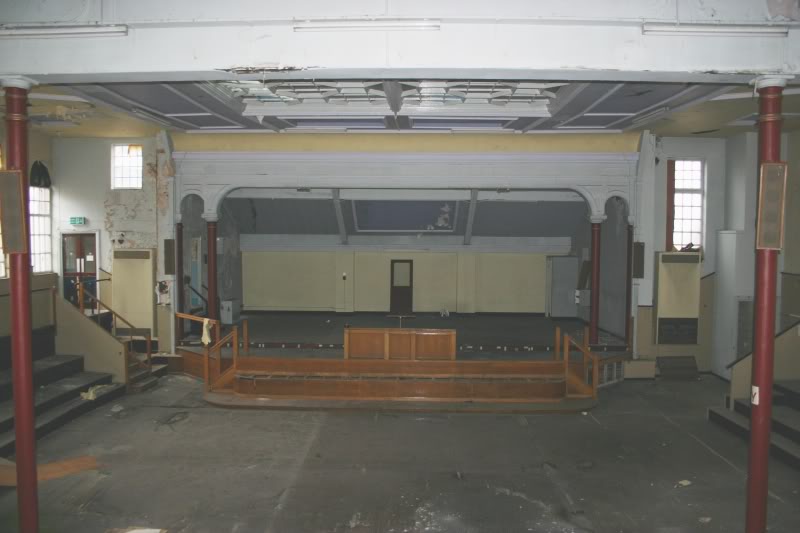 Looking from the top tier towards the stage - I bet there was some "fire & brimstone" sermons from there! 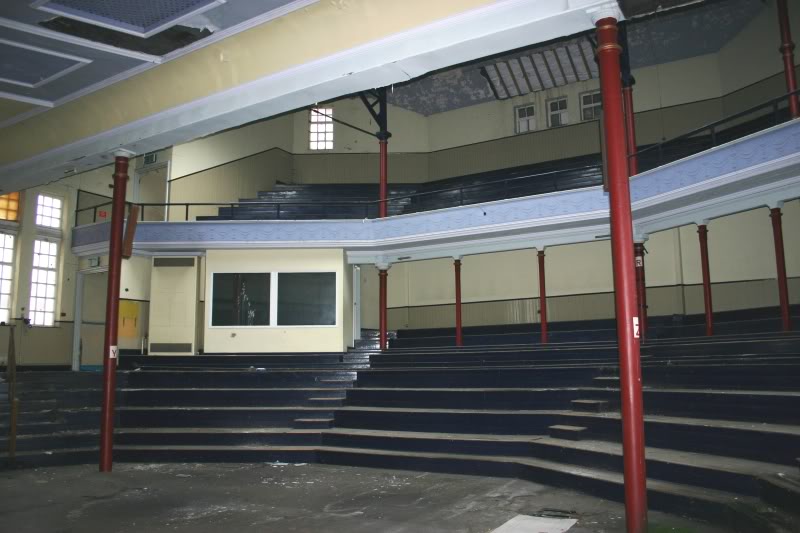 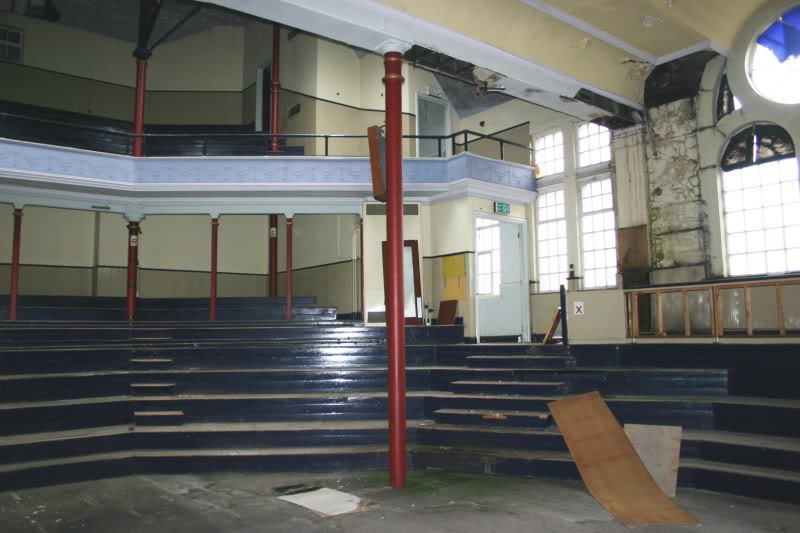 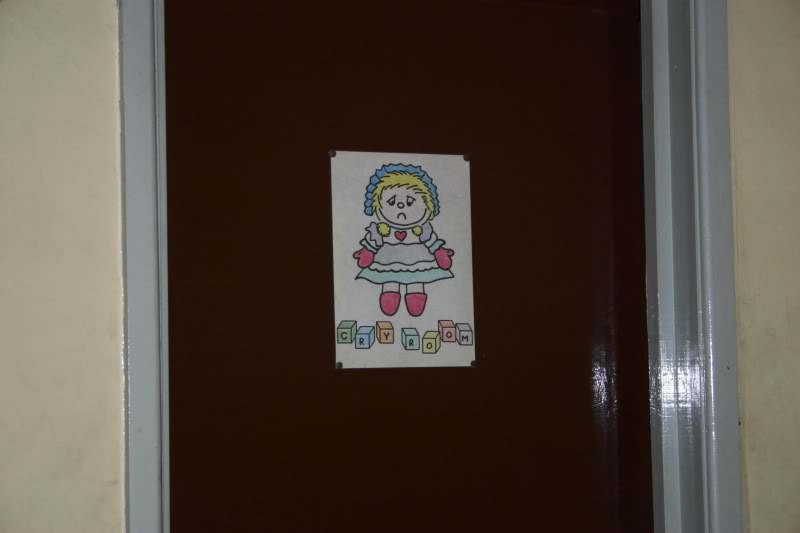 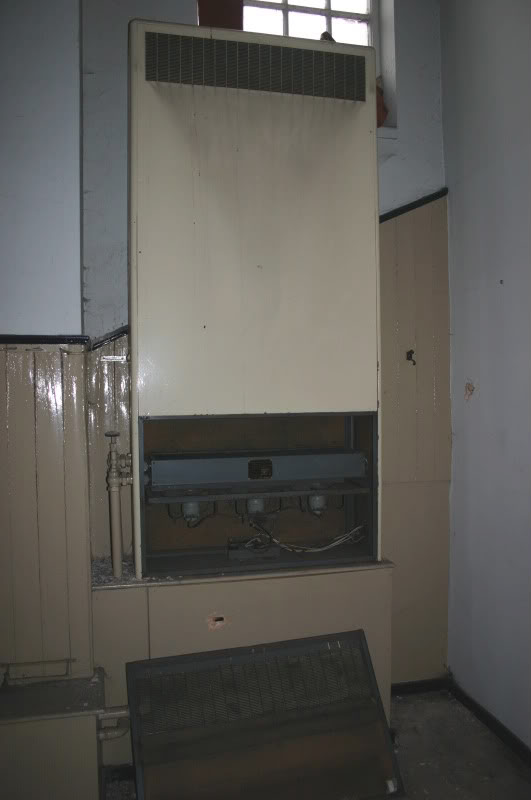 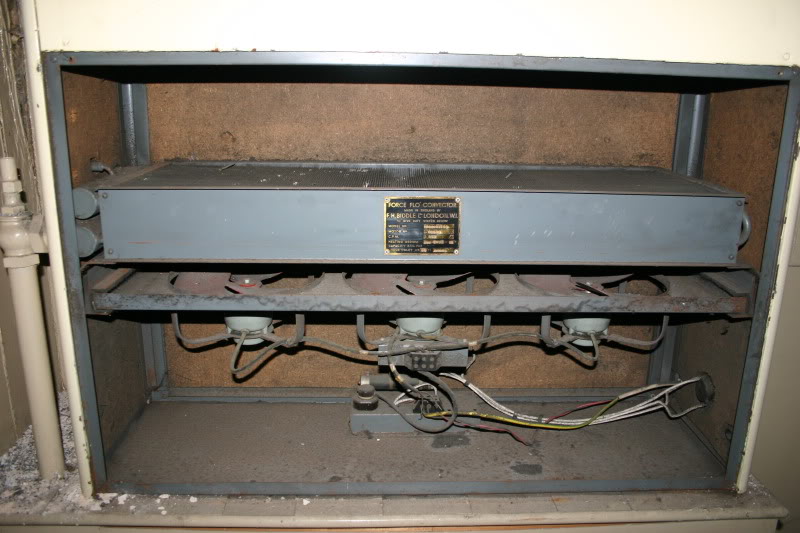 Plenty of these heating stacks around... 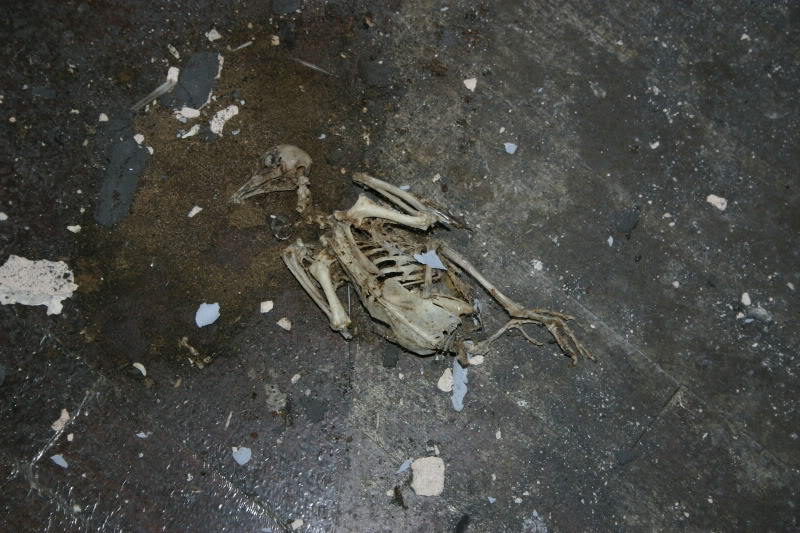 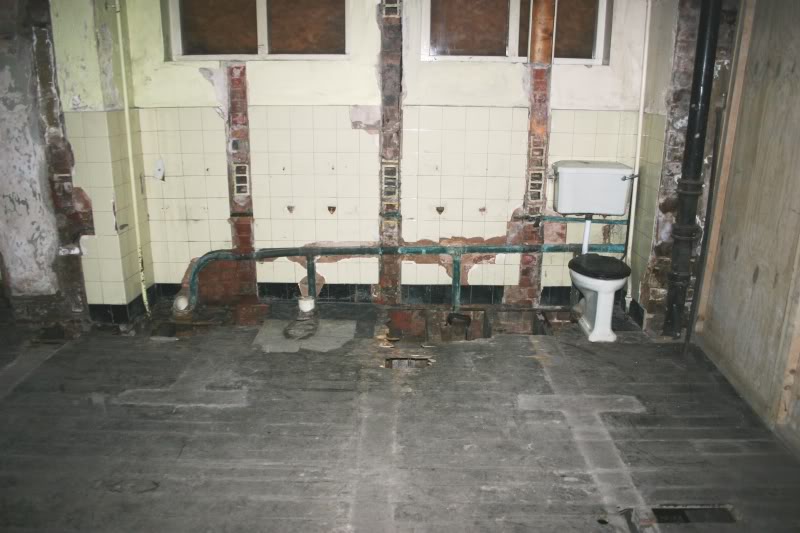 Very public toilets now the downstairs walls have been ripped out 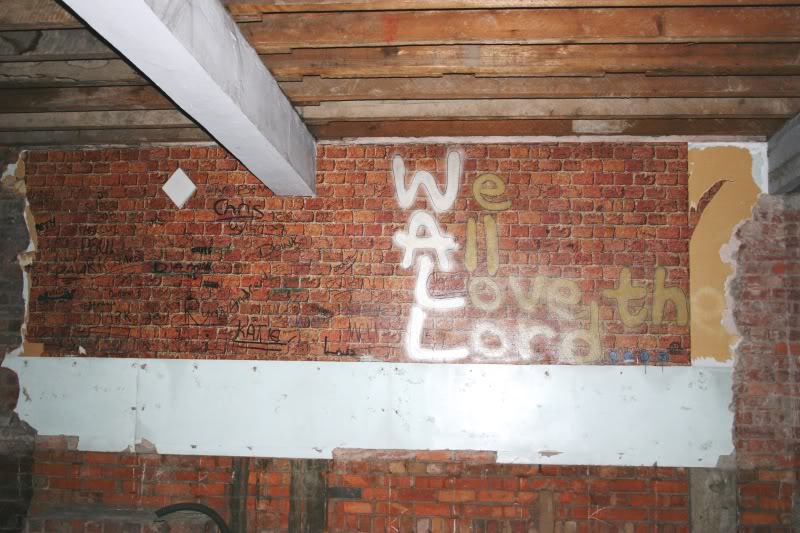 This brickwork is actually wallpaper....:crazy 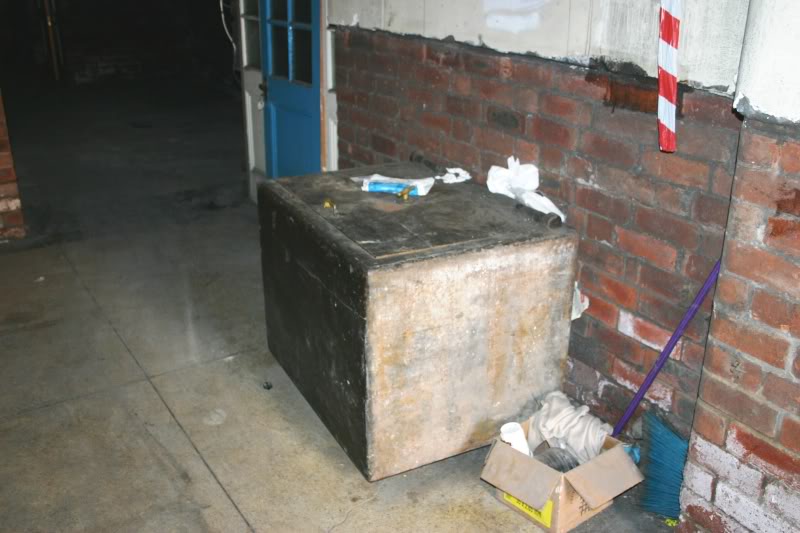 Safe, man... BTW the bag on top still contains a Greggs Sausage Roll - may well have been left there for weeks since the asbestos removers left. 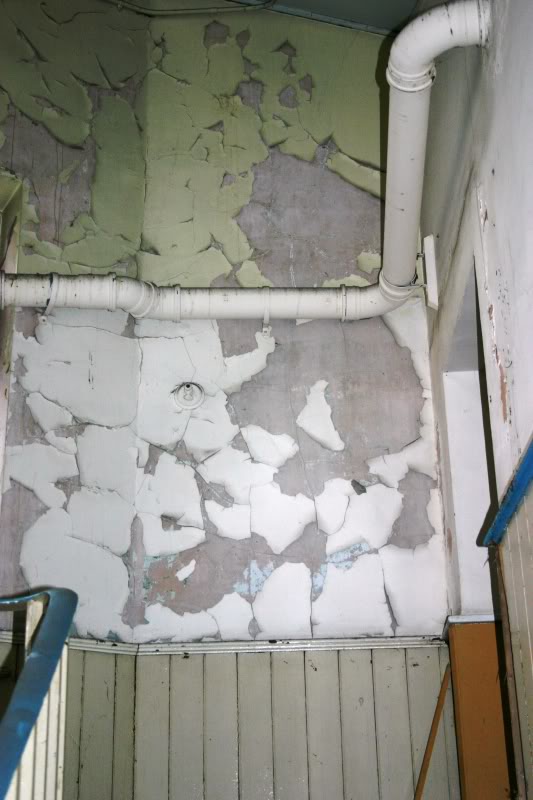 Couple more random images follow (sorry about the flash on the last one (my exposure selector was playing silly buggers at the time...)): 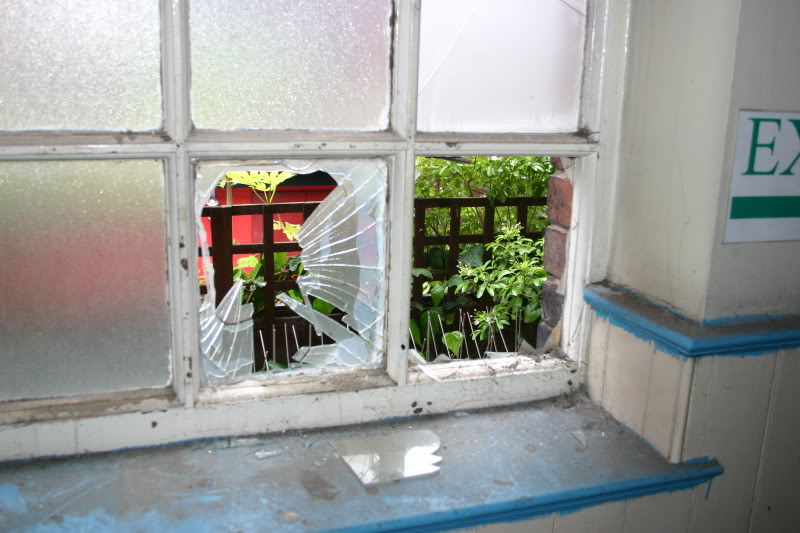 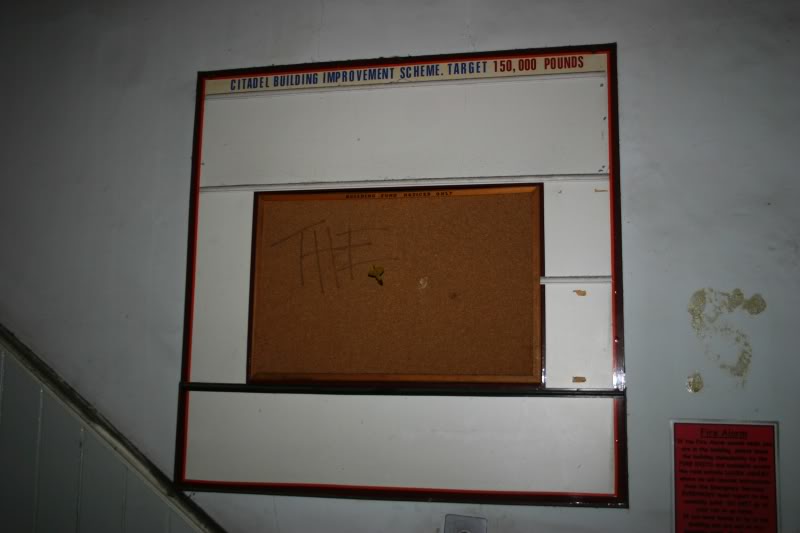 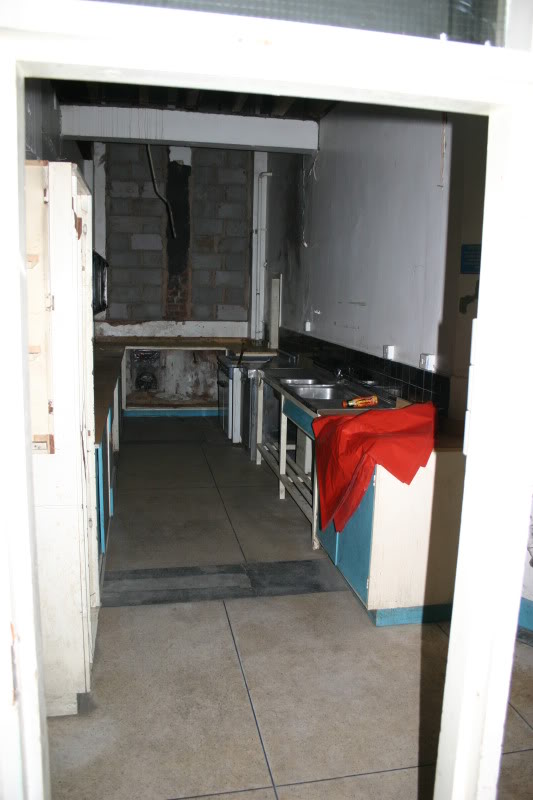