Pear Mill History if you're interested https://historicengland.org.uk/listing/the-list/list-entry/1240634​
Ever since getting into this exploring lark a few years ago I’ve wanted to get up this chimney. We used to have to drive round it every day to get onto the Stringers Weir site we once worked on. It’s a belter of a chimney as far as brick ones go. There’s even an indoor climbing wall inside the mill but I wasn’t there to climb on no plastic. I had been a few weeks previously, though and was delighted to see that after three years of me patiently waiting someone had laddered the chim all the way up. Well nearly all the way – they stopped short at the bottom, which provided an extra challenge.​

Twas in my sights ages ago….​ 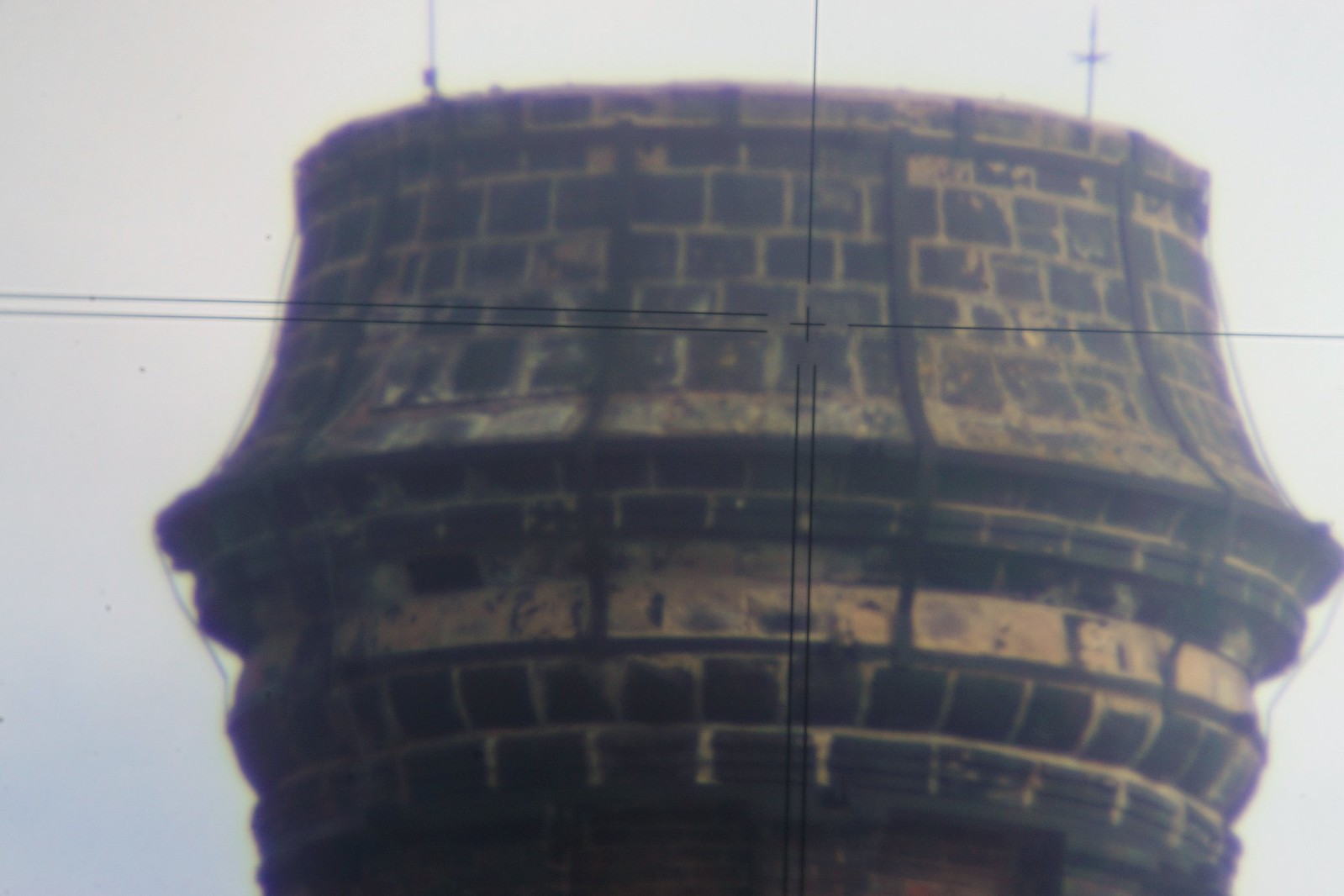 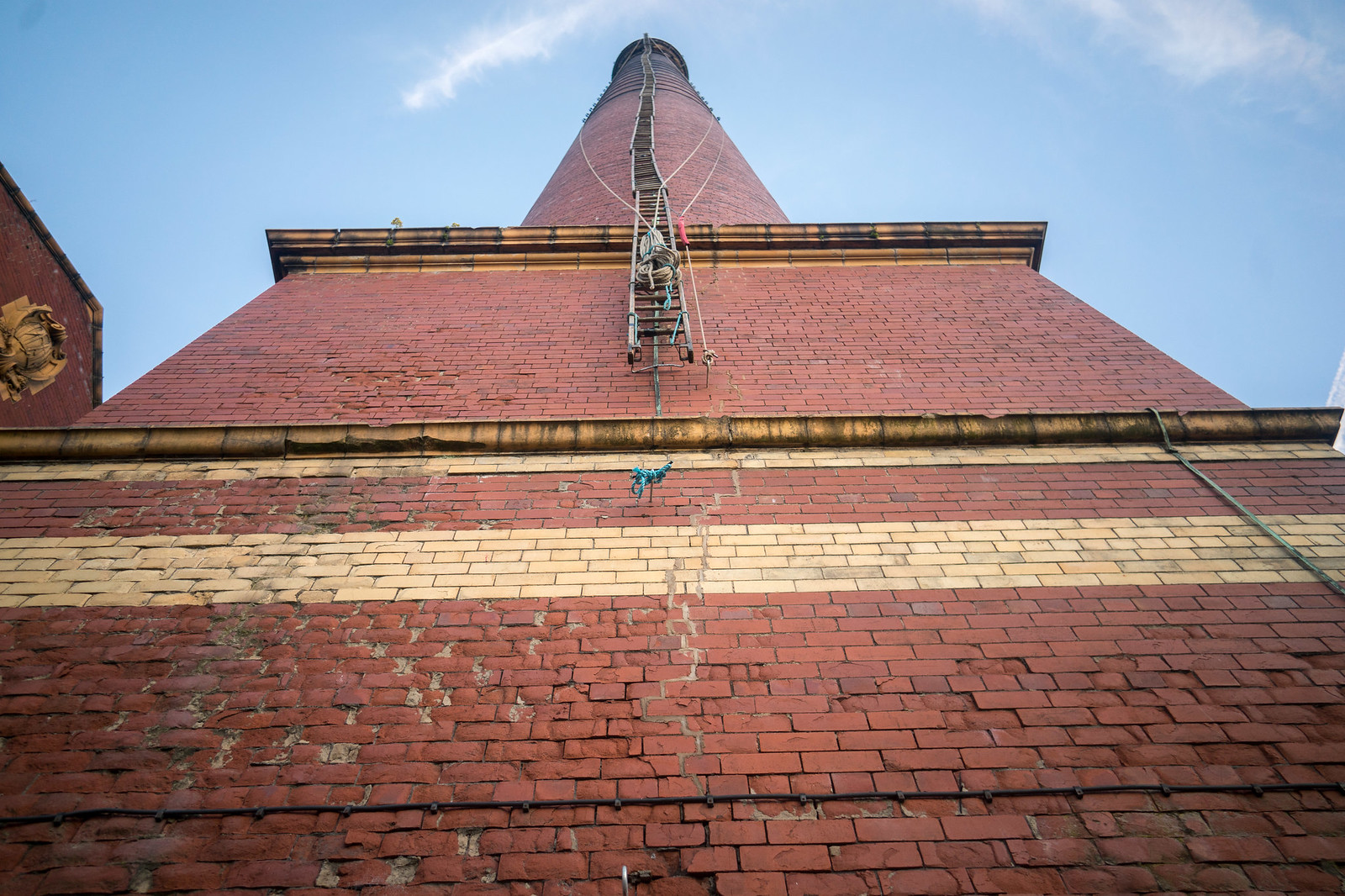 As for the Steeplejacks ladders: they were probably older than Fred himself. There were 13 of them stacked one on top of the other in a wavy line for 200 odd foot and overhanging at the top. They’d been lashed onto eye bolts drilled into the brickwork and to all 10 of the 6” brackets that brace the middle section of the chimney.​
My pics weren’t very good. I took me tripod all the way up and back down again and didn’t even get it out of the bag. There’s not really anywhere to set it up so it was handheld pics only​ 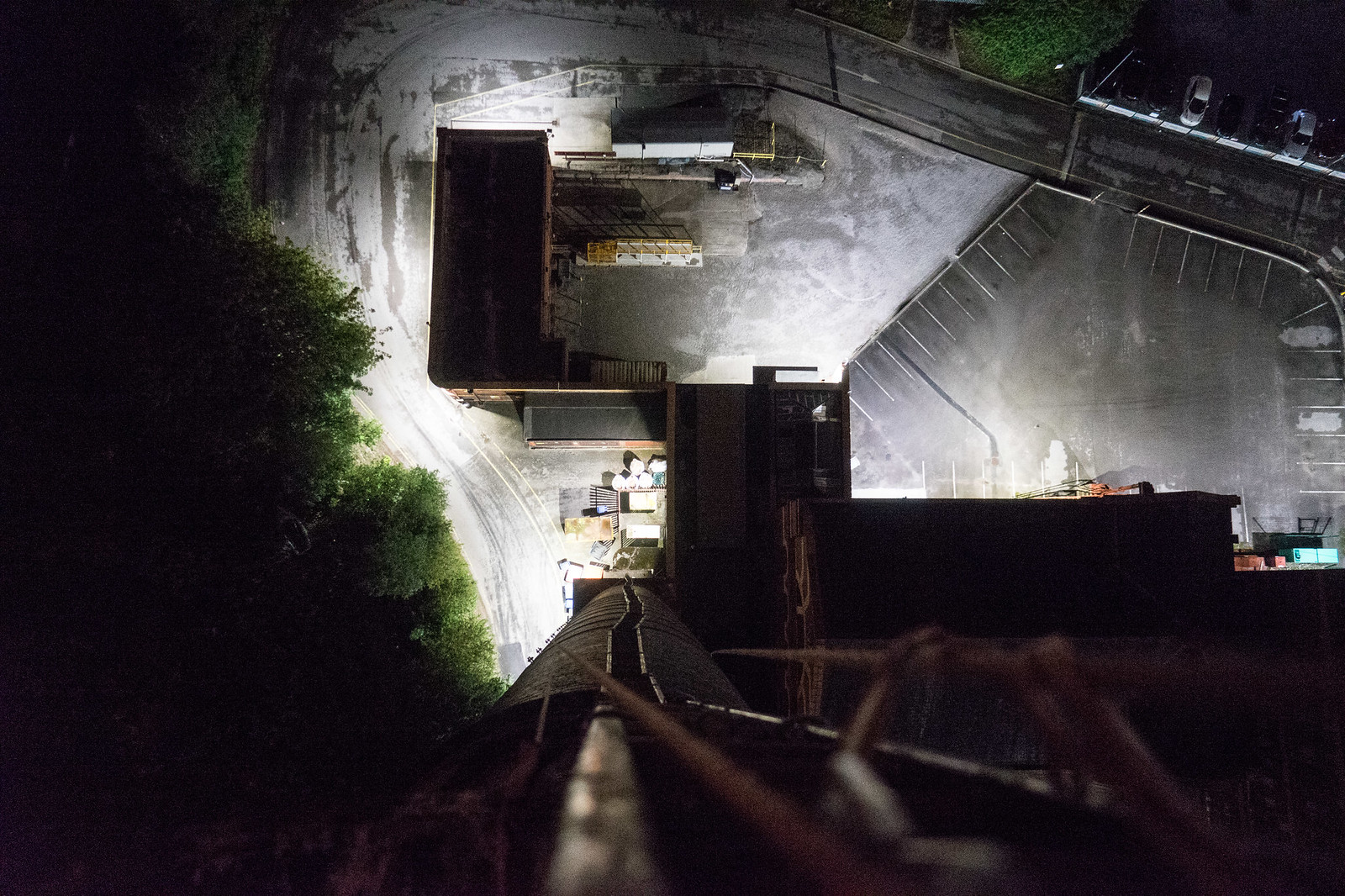 This was the only one that wasn’t handheld. The camera’s resting on the 3” wide lip that separates the inside of the chim from the outside. Manchester’s visible in the background – the security hut isn’t – thankfully. I tried to limit the use of my torch….​ 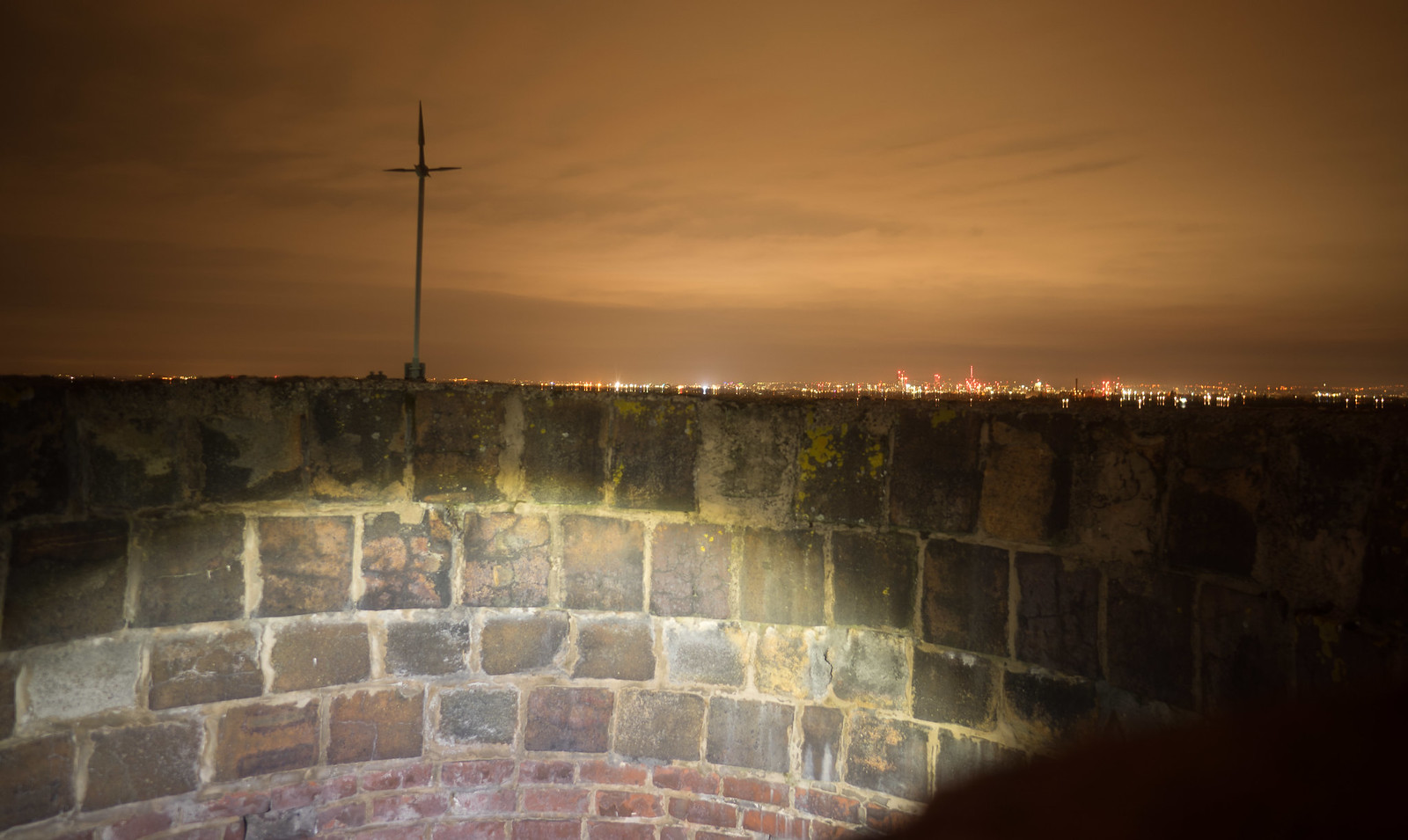 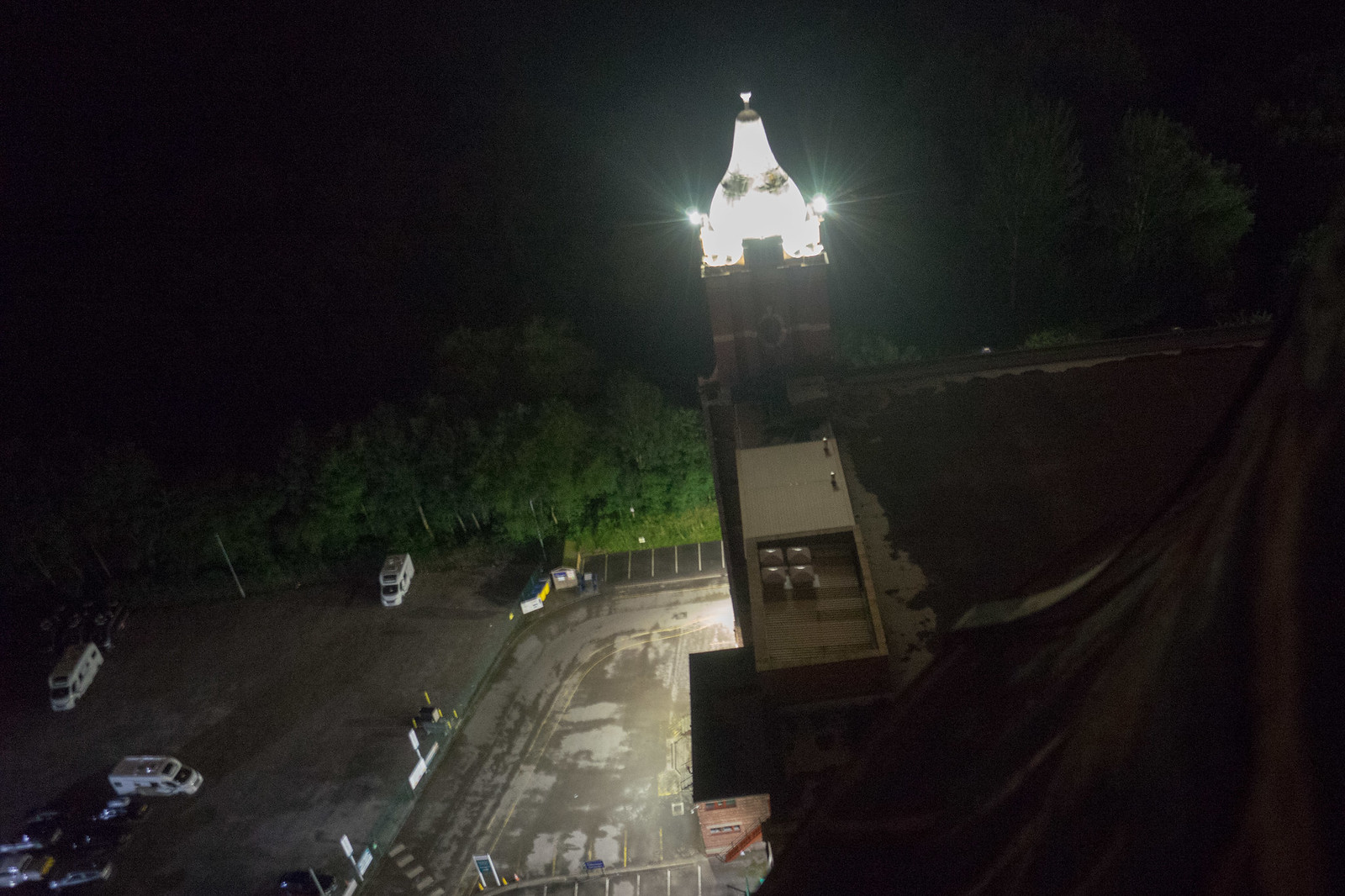 The tiled roof of the chimney. I wondered why old brick chimneys have a tiled ‘bell end’ like this to climb round. I can only think it was to stop the rain and frost getting in, which it would if water ran down it all the time. The ladders are tied in place at the top and the rope restricts movement. The tiles were grippy though at least, which was just as well.​ 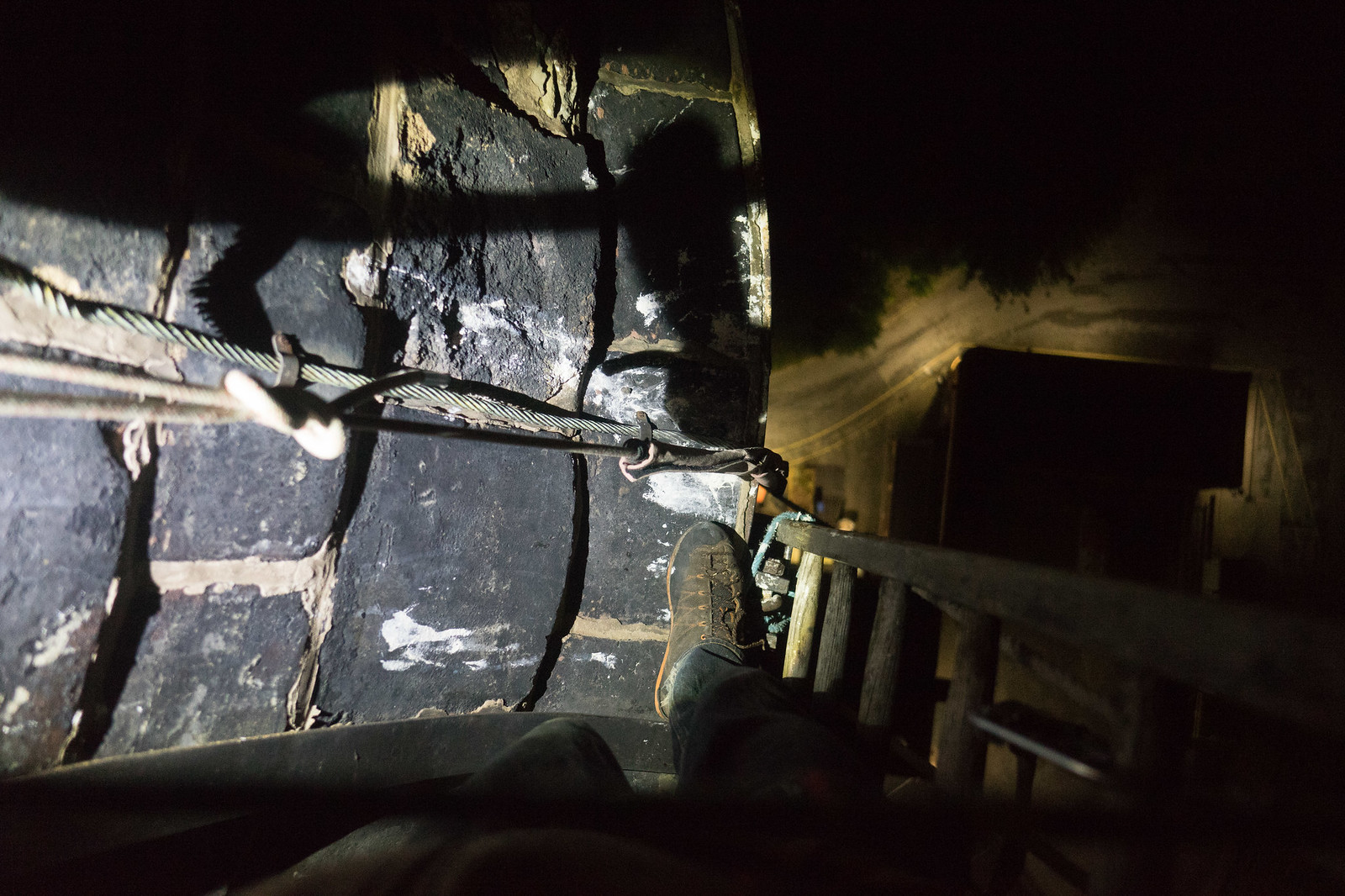 ​
After I’d taken a few at the top it was time to make my descent so I stepped back round on to the overhanging ladder. I’d not really been looking forward to doing this so I was glad when I’d done it and could finally ‘relax’ (a bit) and take some more pics mid route​ 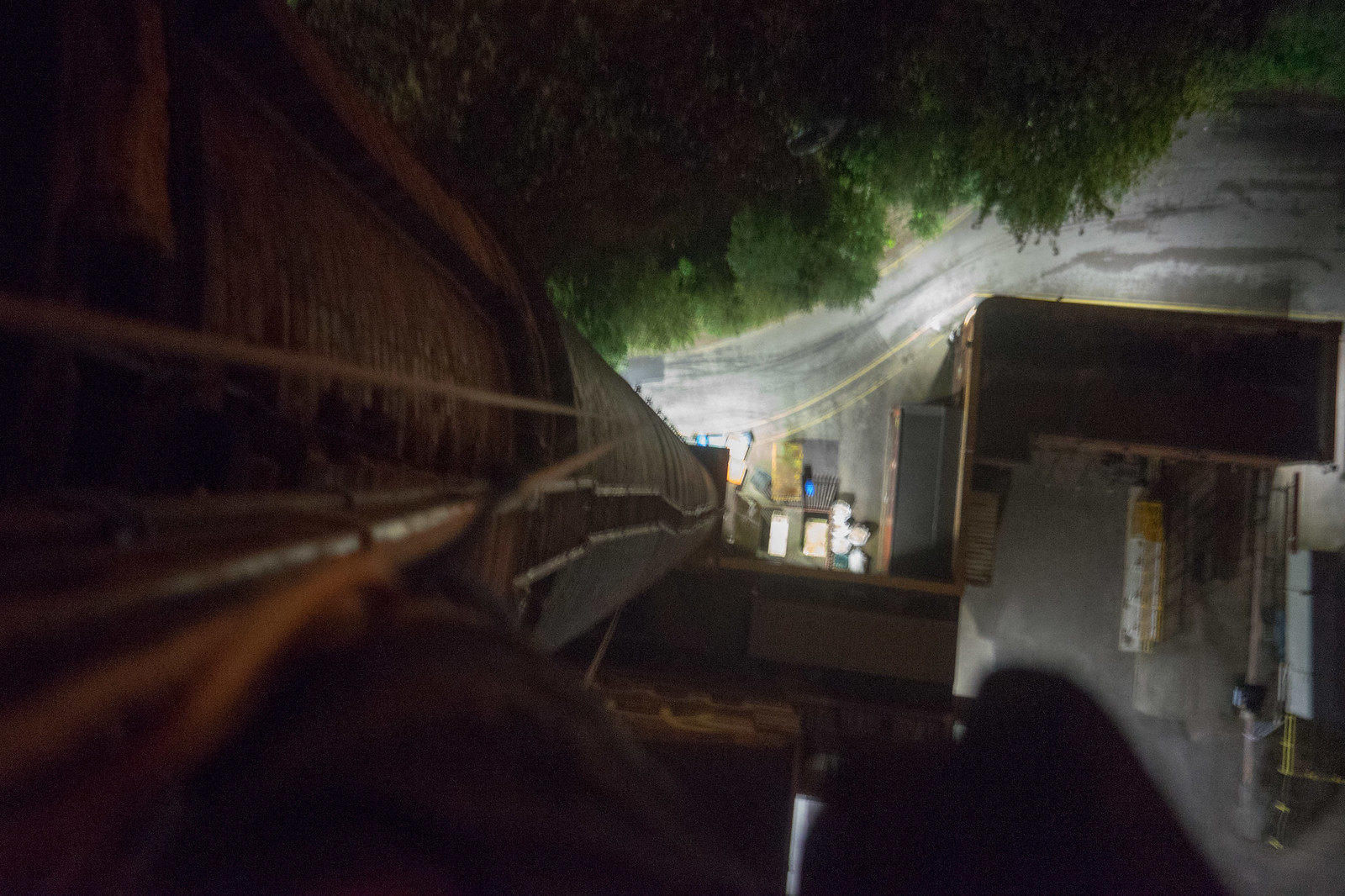 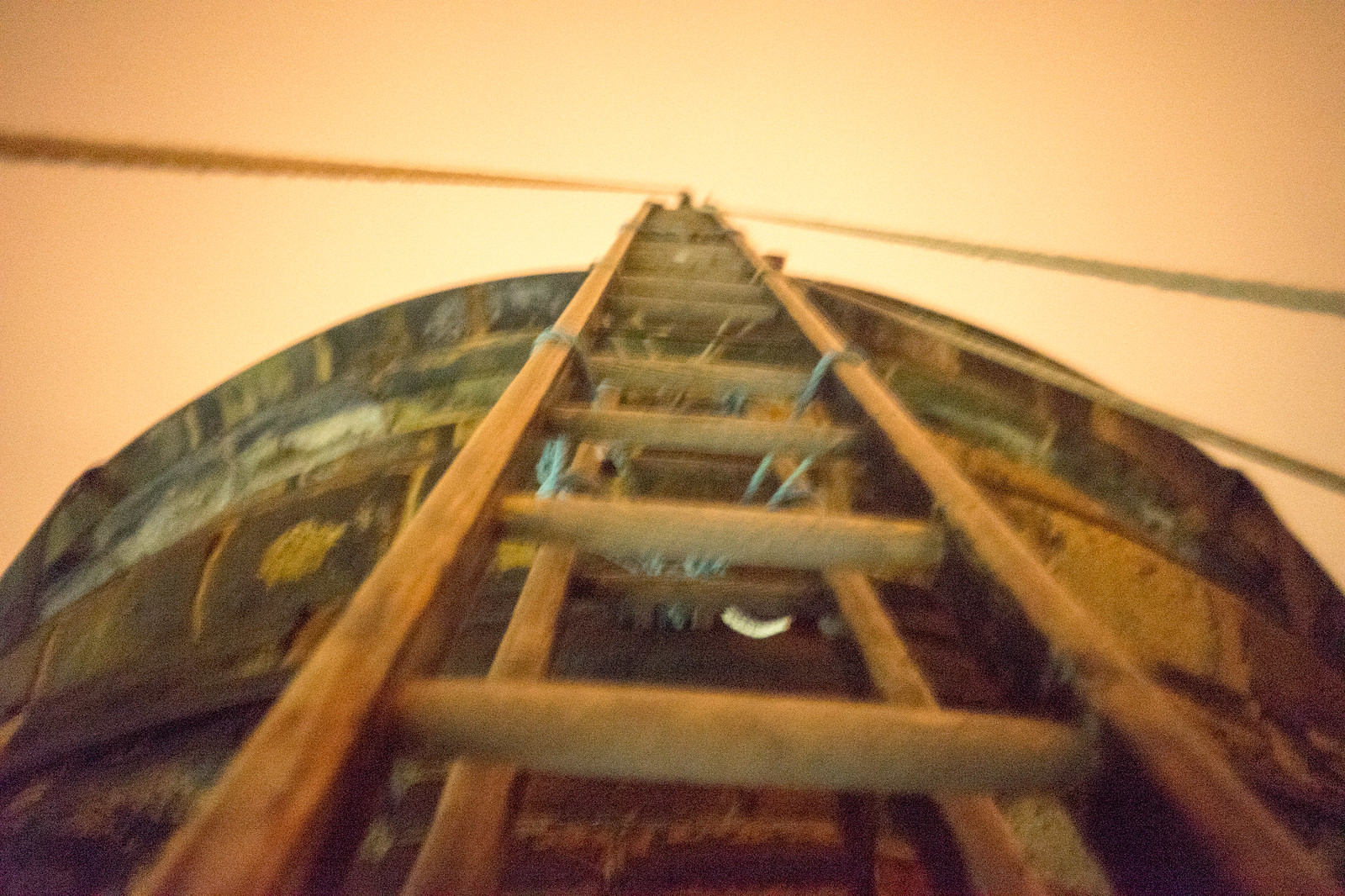 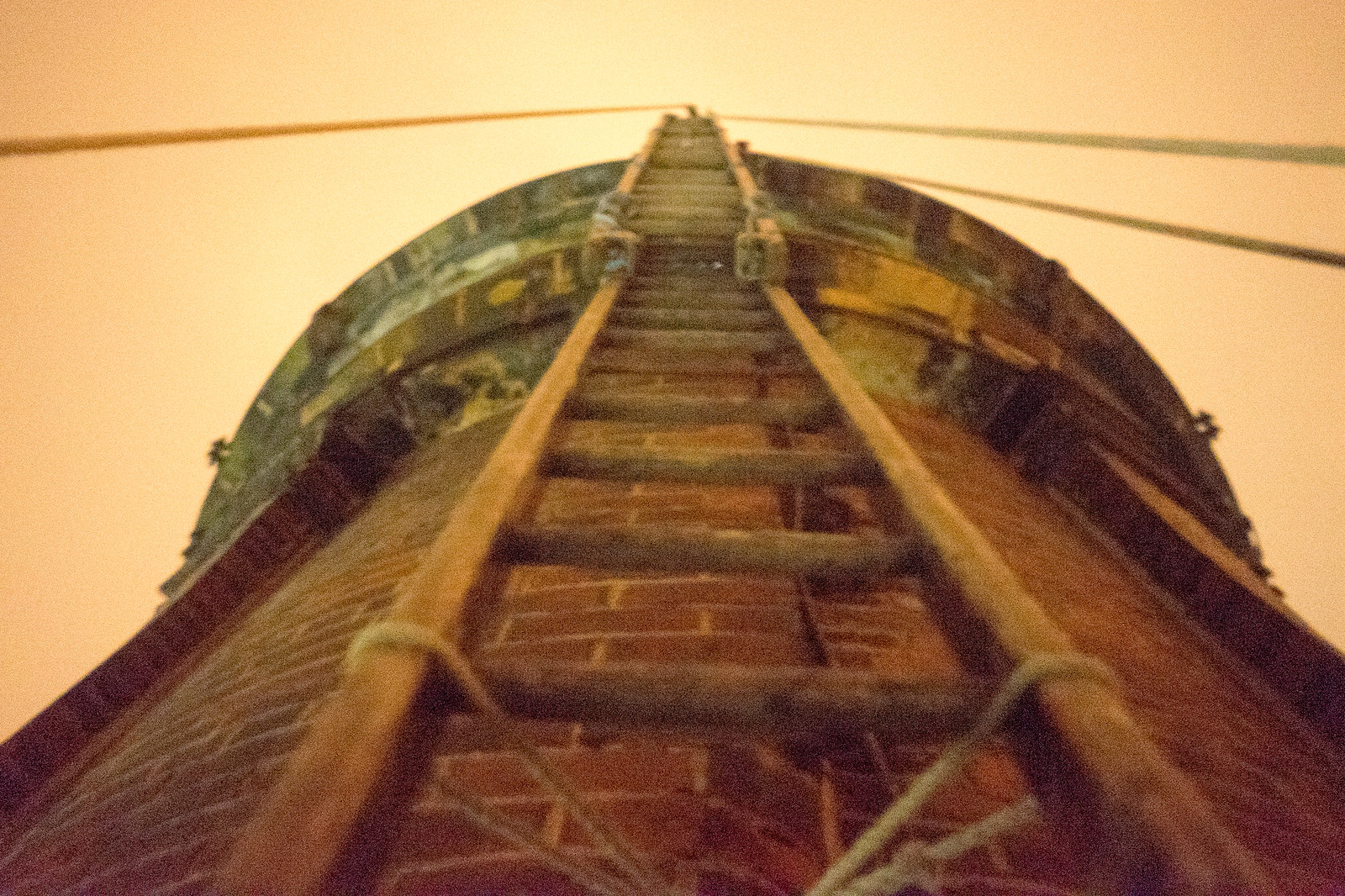 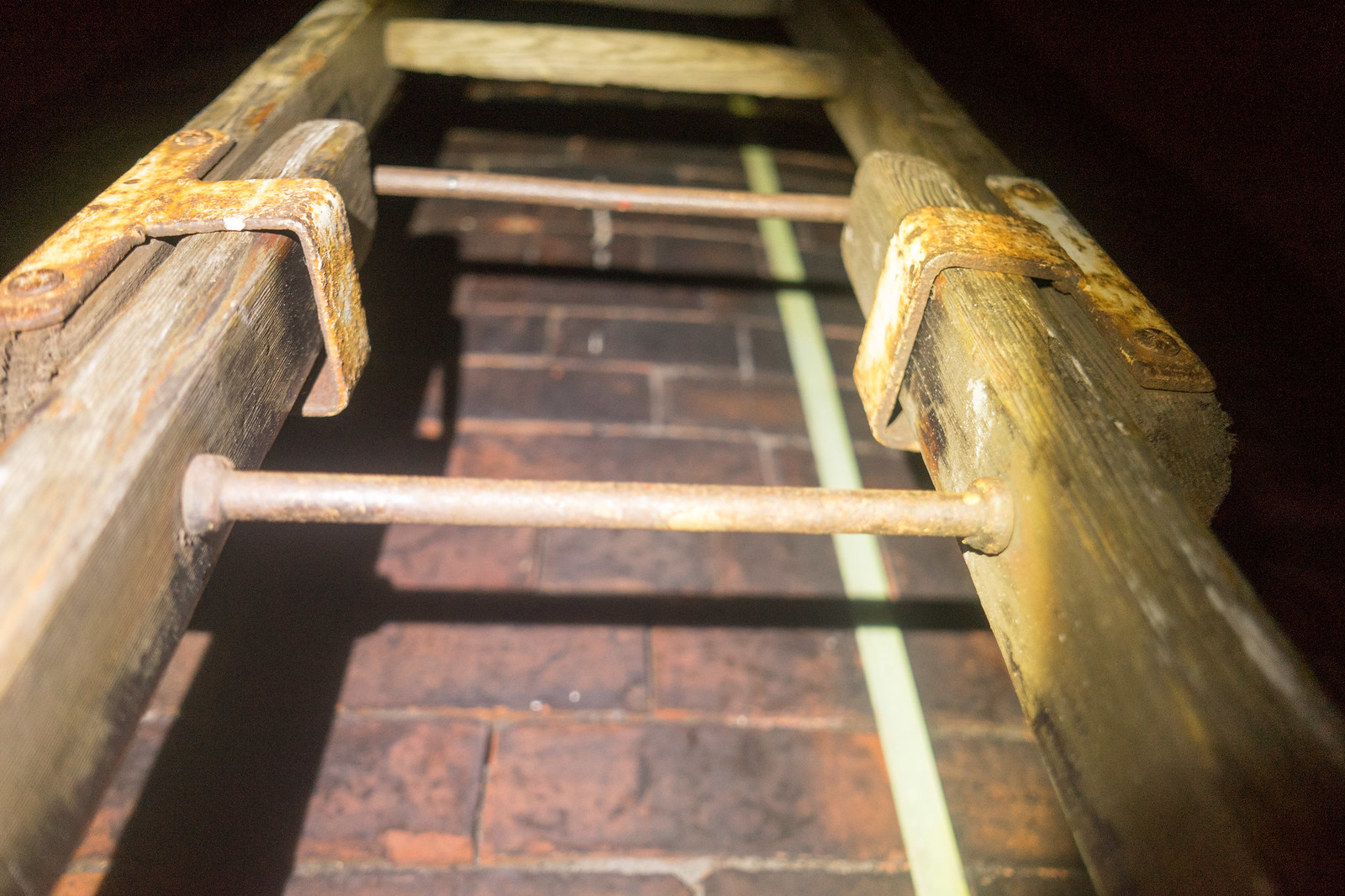 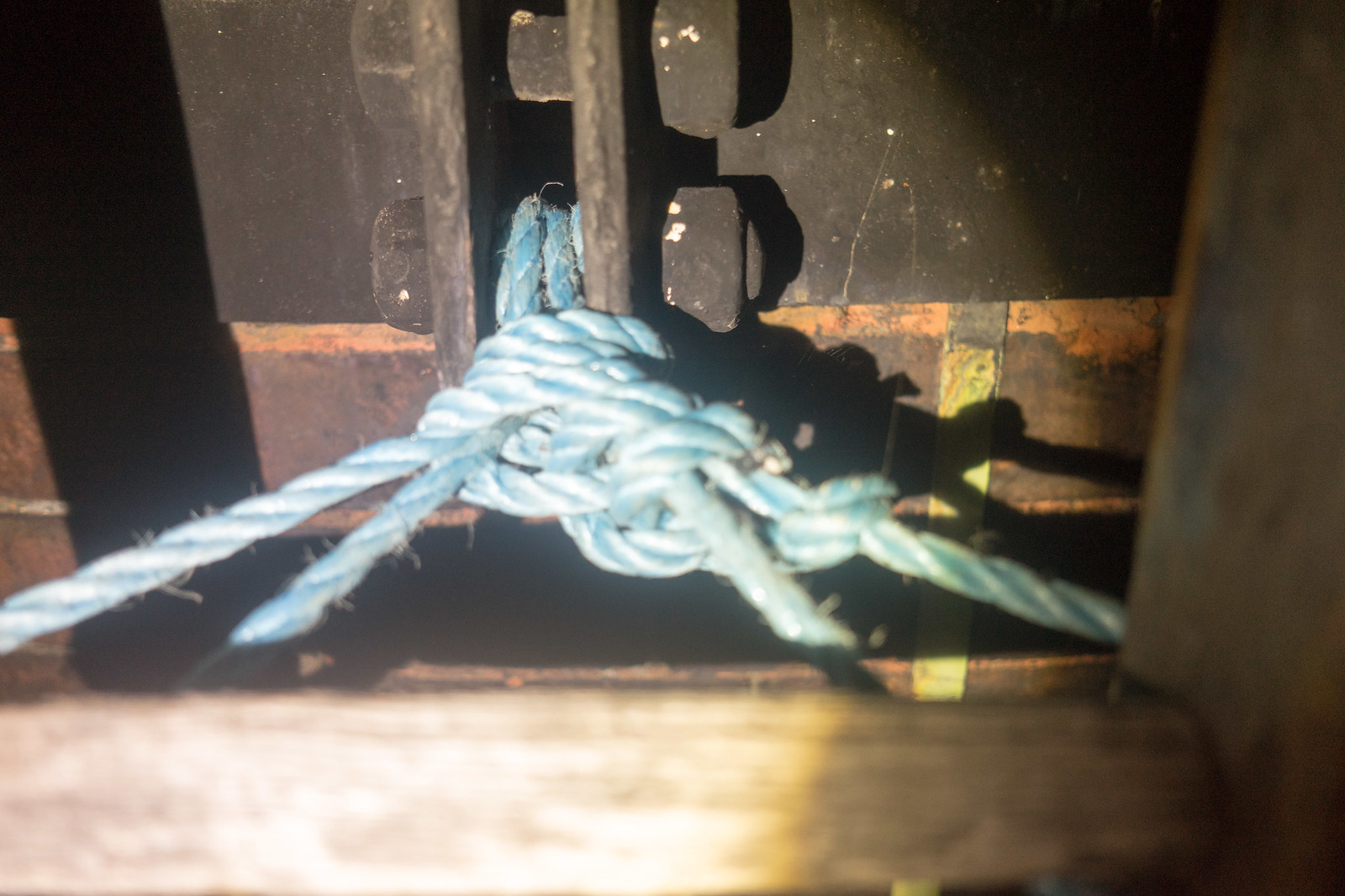 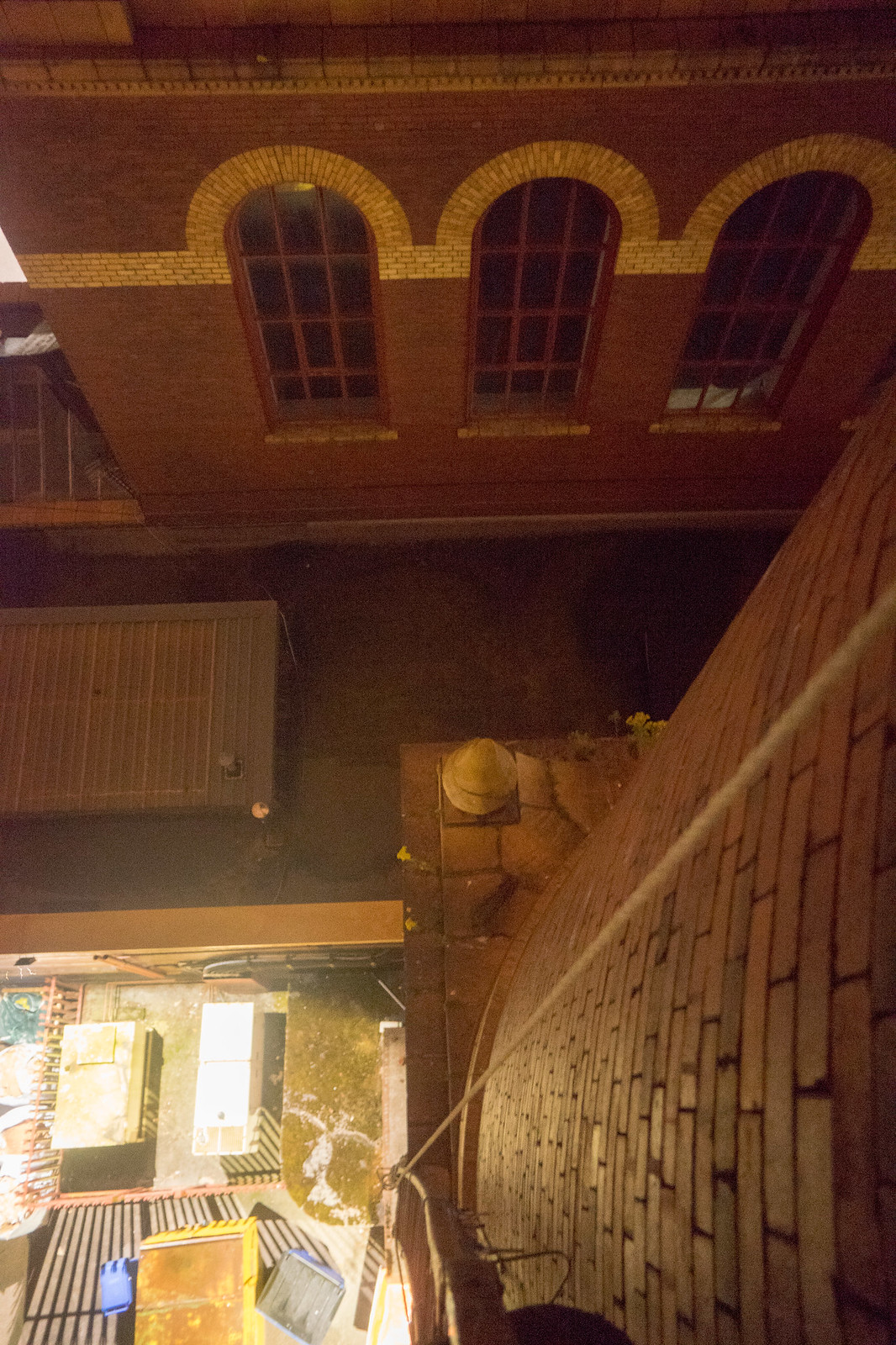 This pear was nearly as rotten as the ladders 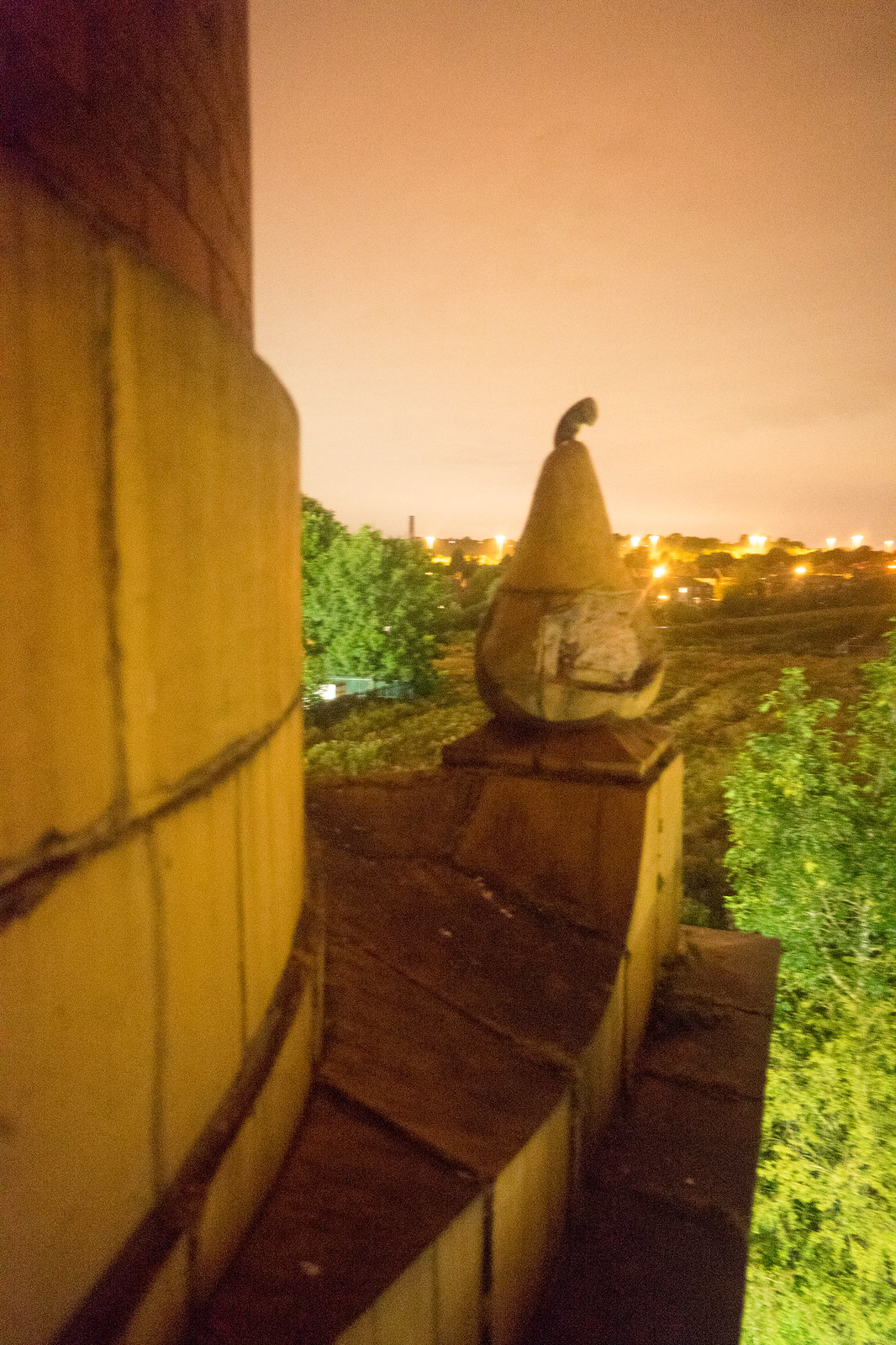 And finally on the walk out I did get my tripod out…..​ 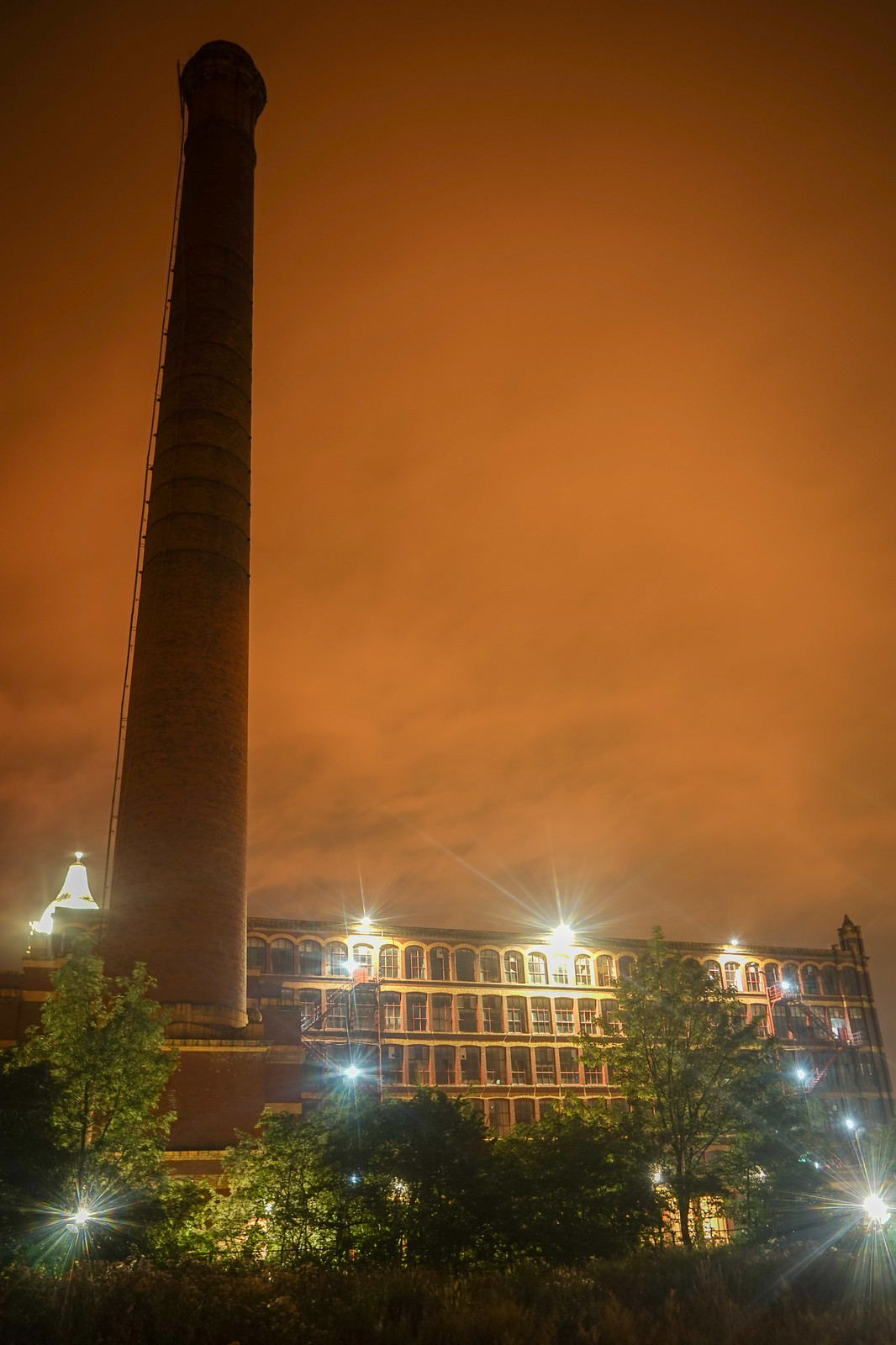 Very glad to have done this and very fortunate to have found it laddered up to the top. Grateful to @albino-jay for the heads up, though

And to Ojay for telling me his heads up was for a different chim nearby.​
Thanks for lookin’​

Regular User
I hate ladders and looking at that is making me feel ill! No problem with using ropes to climb but a ladder with more than four rungs is too tall for me ;-)

Nicely done and good photos for the conditions - thanks for posting.

Regular User
Errr, yeah, you would have beaten me in a race to the top for certain! My brave-o-meter wouldn't have even registered.

Staff member
Admin
Good to see it getting done again and you finally got a break in the weather, after countless trips to the area

Probably spent longer looking for the bouldering mat than climbing it

28DL Full Member
I love a good climb, but my god, you would not see me climbing those ladders!
That must have been horrible haha!

You wouldn't catch me up there, I don't like high things
Free and easy down the road I go, Livin' life like a Sunday stroll

28DL Full Member
This looks terrifying! Hats off to you mate! Enjoyed this

Regular User
Nice work, if your into this go Houldsworth mill in Reddish it’s got ladders from base to top at the moment I’m too chicken. It’s having some work done.

Regular User
Bloody hell TG, I’m glad you got it done but rather you than me on those ladz.

Regular User
Nice one man, but yeah fuck those ladders! Respect for getting it done though mate!

Regular User
That's quality, nice one getting it done. Braver man than I!

Those ladders look old/sketchy as fuck!
Not all who wander are lost

Regular User
Nice one, I really want to do a climb, but im such a klutz, with Rems MS I never know if a limb will fail me, also I dont suppose it would help my vertigo I developed on these meds lol. But I love viewing others climb
You must log in or register to reply here.
Share:
Facebook Twitter Reddit Pinterest Tumblr WhatsApp Email Link