Photographers Rights in the UK

Admin
Photographers Rights in the UK...

Print it off and carry one in your bag !

Staff member
Admin
Cut out, keep and memorise, courtesy of the Daily Mail... 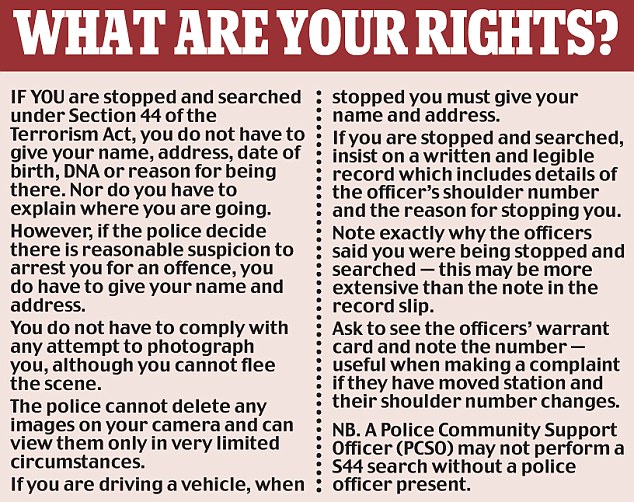 Regular User
just found this which might be a worthy read.....

28DL Full Member
This is worth listening to...
http://www.bbc.co.uk/programmes/b00sm6ct

28DL Member
Some very useful stuff here. Saw the stuff about confiscations, does anybody have any ideas about what to do if security do try to confiscate their camera?

And on a slight tangent, what to do if security take pictures of you? Was caught recently and security took my picture to add it to the list of other UEs they'd caught. Have a feeling this is legal, just want to make sure,

Ushk said:
Some very useful stuff here. Saw the stuff about confiscations, does anybody have any ideas about what to do if security do try to confiscate their camera?
Click to expand...

Report them for theft, or assault (if they try to physically remove it)


Ushk said:
And on a slight tangent, what to do if security take pictures of you? Was caught recently and security took my picture to add it to the list of other UEs they'd caught. Have a feeling this is legal, just want to make sure,
Click to expand...

Taking a photograph of you is not a crime. How they store and use it may be covered by the data protection act.

These were from the Met weren't they ?
The following advice is available to all officers and provides a summary of the Metropolitan Police Serviceâ€™s guidance around photography in public places

Includes such quotable things as
"Members of the public and the media do not need a permit to film or photograph in public places and police have no power to stop them filming or photographing incidents or police personnel."


and of special relevance here
"There is nothing preventing officers asking questions of an individual who appears to be taking photographs of someone who is or has been a member of Her Majestyâ€™s Forces (HMF), Intelligence Services or a constable so long as this is being done for a lawful purpose and is not being done in a way that prevents, dissuades or inhibits the individual from doing something which is not unlawful"

Worth having a copy in your camera bag.

28DL Full Member
For God's sake! Photographers, plural, means that the apostrophe comes after the word photographer, in other words "photographers' " and.....what am I saying? Just to put a counter-point (this is going to make me really popular) but to the best of my knowledge there is an act of "Hostile reconnaisance" at a potential terrorist site, on average, once a day in the UK. As an example, last year at a UK airport a member of the public reported a young asian male as acting suspicously. When the cops turned up to speak to him he was see filming the structure of parts of the terminal building on his phone. All the parts of the building on the phone were potential weak spots where an explosive device would cause the most damage. The young man stated that he was an architecture student studying for a degree in Pakistan. He was not known here and when asked, deleted the film from his phone. Student? Terrorist? Facillitator?

Some parts of the old Sec 44 were ridiculous, such as photographing the Houses of Parliament from the embankment or Buckingham Palace from the Mall, but nowadays with e-mail a recon photo that would have taken 24 hours to process and another couple of days to get to the planners can now be there in a minute or less.

Ironically, instead of treating photographers as potential enemies, it might have been a better idea if the Home Office and police forces had thought about how observant many keen photographers are (almost by definition) and encouraged "them" to use those observational powers to spot the difference; the difference between a snapper and someone who's taking photos that seem perhaps a little odd.

the beard said:
....the difference between a snapper and someone who's taking photos that seem perhaps a little odd.
Click to expand...

the problem with this is that most 'normal' photographers would think pulling on a pair of wellies and going down a drain to take photos is a little odd, so half the people on this site are potential terrorists

Regular User
@the beard - what colour is the sky on your home planet mate?

My last stop under 'anti terror laws' was at 9 a.m, in a sleepy Somerset Town, on a public street, on a Sunday, whilst with my son - I just happened to be carrying (carrying, not using) a camera in the same road as a police station.

Does that make me one of your ""Hostile reconnaisance" (sic) suspects?

Germany is the "wurst"

28DL Full Member
Inane generic comment about how I support photographers' rights because the message I posted somehow ended up in the totally wrong forum and had nothing to do with this thread and this @%)(* thing won't let me delete posts
You must log in or register to reply here.
Share:
Facebook Twitter Reddit Pinterest Tumblr WhatsApp Email Link