28DL Full Member
Ravenmorrow:
After seeing this place online I thought I'd head over to it forthwith to ensure I got my photos before it was inevitably ruined by certain undesirable characters in this community...
The pool has since been graffiti-ed unfortunately by what I can only assume is Banksy's less artistic, more thug like brother. It definitely does take away from the majesty of this place when you get to the pool and see tables chucked in the hot tub and spray can all up the walls, but it always regrettably happens.

The Explore:
My first visit here was a solo explore but ran into many people here (most of which I didn't recognise the names of...). The local security were characteristically bad: never saw a peep of them the whole time though I would expect that will change at some point in the future to compensate for increased graffiti from locals/kids etc.
It was awfully relaxed here considering the amount of people that were there throughout the day and it was in fact the first 'tourbus' place that I'd done at the same time when everyone else was there as well, which I will admit definitely takes away from the abandoned feel of the place to be honest.
I did come back here very recently with a friend who wanted photos for a portfolio but had to surreptitiously leave after about 40 minutes because the family that live next to the mansion had audibly entered the garden which belonged to the abandoned part of the mansion and we did not want to be sighted while getting photos by all the clear windows...

By now I expect many of you have seen this bathroom, and as lovely as it is, I am getting a little sick of it myself... Notwithstanding this, it is a very vibrant if not slightly distasteful when compared to the rest of the mansion. 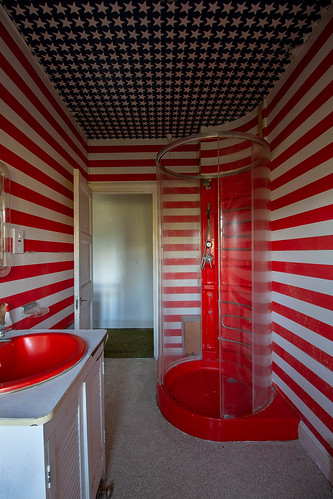 Here's the very dignified swimming pool that the owners would have enjoyed while the place was actually inhabited. It's very deep, especially for a private pool and boasts a captivating lack of vandalism in this photo luckily, though it has since been impaired as I already said :/ 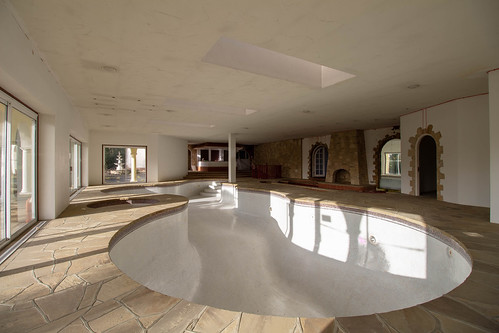 I did like this room an awful lot with its sumptuous carpet and gold-coloured lights but found it awfully hard to actually get a good shot of them because they're not at all straight, but this is a decent idea of the exquisite and grand designs that they had about the house. 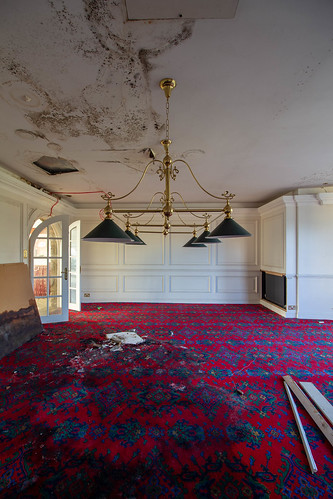 The central staircase as shown here is one of my favourite parts because it shows a much more decaying part of this mansion. It's easy to mistake this place from photos as being mostly pristine but it really isn't; inside the majority of this place is decaying but it's so photogenic you don't see any pictures of it. I also have to tell you with acquiesce that the partition wall on the right hand side of the photo has now also been torn down by some hooligans... 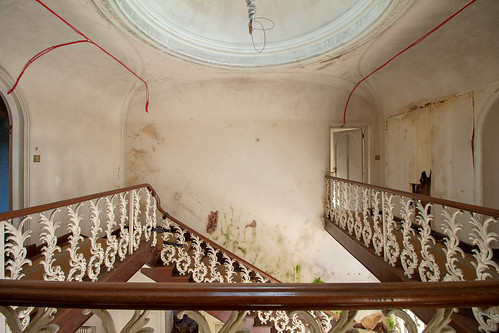 This is the truly pulchritudinous shot which makes this place worthwhile for me; it's definitely my favourite shot of the whole building when tied with the pefect symmetry of the floor and arching ceiling. 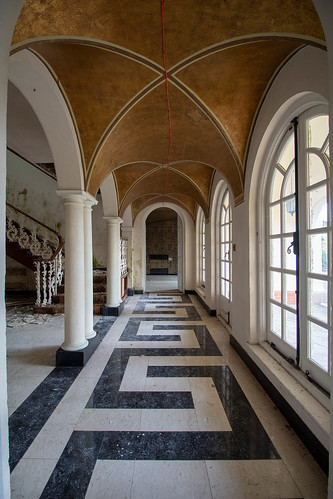 I personally really liked this bathroom and it seemed the most posh of them all to me with it's gold taps, copper-looking bathtub combined with various miscellaneous objects of extravagant nature. 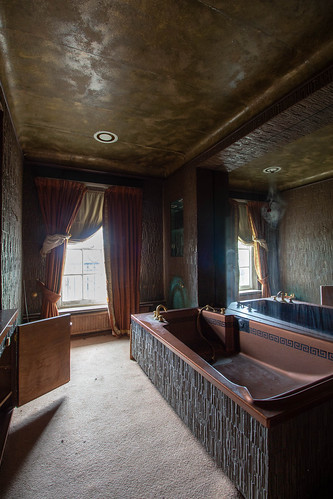 Here we have what I can only assume is their library which is now guttingly barren and void of all books and dissertations. 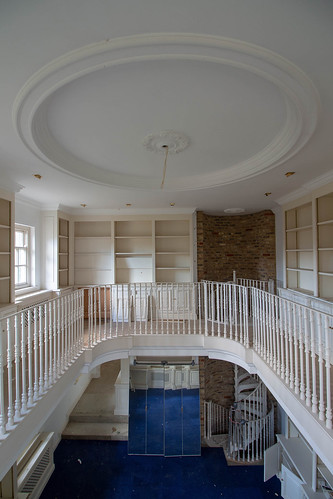 Another marvellous corridor has made it to this report which is nowhere near as grand as the former, but I do love the windows on this bit and how they would look straight out onto the extensive gardens of the site. 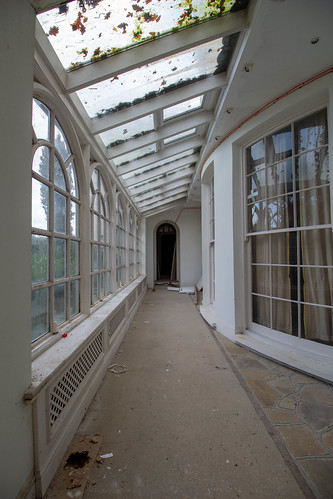 This is the third and final bathroom that I photographed here, though I know there are another two at least but if anyone finds a sixth bathroom I would be very interested to find out! Though it doesn't boast a bath or shower of any kind, the ostentatious ceiling (and indeed a work desk within the bathroom!) really does make up for that as far as I'm concerned. 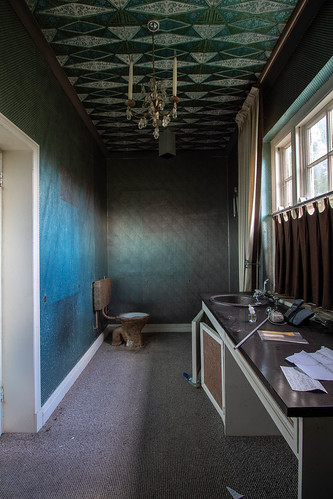 Now I have no intention of plaguing this report with inadmissible photos, but this kitchen really proves to me that whoever designed this house had no taste at all, or that they used different contractors when it came to culinary designs. This kitchen really is a detriment to what is a beautiful mansion, but maybe the owners didn't care because they had servants to do it all for them, who knows! 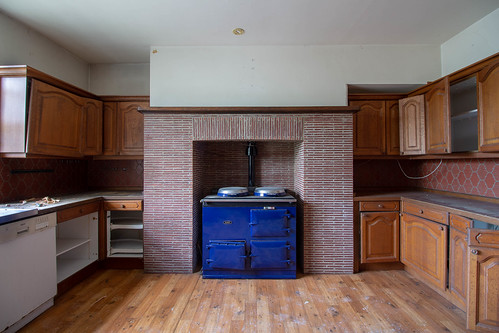 That's about it when it comes to this mansion; thanks for reading! Unfortunately there's very little information I could find online about this place, hence the lack of history etc, notwithstanding that, hope you enjoyed reading

Hahaha had to be done... thanks man

28DL Full Member
it makes me wonder what type of people lived there, great effort on the report btw

RJMmcr said:
it makes me wonder what type of people lived there, great effort on the report btw
Click to expand...

I know man, it’s a different world hahaha - and thanks man appreciate it

28DL Full Member
Thanks for photo of clean pool and the bathroom flag, saved a search after reading about it in earlier post

bungalow-build said:
Thanks for photo of clean pool and the bathroom flag, saved a search after reading about it in earlier post
Click to expand...

No worries dude glad ya liked them