28DL Full Member
The History of RAF Kings Cliffe
The original post was created by HughieD - https://www.28dayslater.co.uk/threads/raf-kings-cliffe-northants-march-2016.103018/ ,many thanks for sharing, I don't want to tread on his toes and copy what he has written

From the additional information below, they also used the runway at Harringworth to store planes at both runways

Exploring RAF Kings Cliffe
As this site was only 30 minutes from my house, I thought I'd go and see it for myself along with the pump house - additional review to be posted on the latter

I went early morning and parked just off the road next to the farmers gate to his field, the site was certainly overgrown, I did try and walk along the runway but was escorted off by an attractive lady who owns the land, from what I was told they now cull deer on the property, I did manage to take a few pictures and snuck back onto the land to take additional shots of a bunker, real shame I didn't get to see the buildings that HughieD took.

Additional Information
@Bekin Glynn - Many thanks for pointing out the error. The air museum is at Harrington, while at the museum he mentioned the airfields at Harringworth and Kings Cliffe
In case anybody's interested, at Harrington about 20 mins away there is an aviation museum - RAF Harrington - Carpetbaggers, it's £5 to get in, we were there over 2 hours, a few air raid shelters and parts of the runway still exists. unfortunately they won't let you take photos of the exhibits inside but is still a good afternoon out

This bunker is on the bridal path so easily accessible, I did climb to the top to take a look around, be careful now as much of it has collapsed due to the roots of the trees

I snuck back onto the land to take a picture of the following, ducking when they drove into the field

Nature has certainly taken over looking at the image below

Just off the farmers field next to the bridal path, this bunker was just visible from the weeds, I could see the big one that Hughie took in the middle of the field but couldn't get close enough to take a picture as they were driving around

As per HughieD's photo of the shelter, it's remarkable how its still intact, although his paintwork is red so assuming it's a different bunker

Regular User
Nicely done.
The control tower is worth a look (& Glen Miller memorial) over the far side

Is there a museum at Harringworth or do u mean the one at Harrington?
The nearest airfield to Harringworth is Spanhoe
Stop The Planet, I Want To Get Off!
R

28DL Full Member
@Bikin Glynn - Many thanks for pointing that out - The museum is at Harrington but during the chat there he mentioned Planes based at Harrington, Harringworth and Kings Cliffe, too many Harring's - lol. Spanhoe also came up.

I couldn't find the Glen Miller memorial, would be good to try and find that
There's always somewhere to explore and photograph

RobertLeem said:
@Bikin Glynn - Many thanks for pointing that out - The museum is at Harrington but during the chat there he mentioned Planes based at Harrington, Harringworth and Kings Cliffe, too many Harring's - lol. Spanhoe also came up.

I couldn't find the Glen Miller memorial, would be good to try and find that
Click to expand... 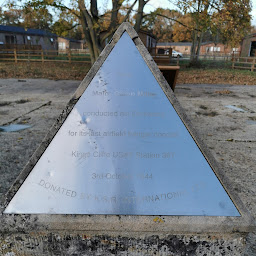 www.google.co.uk
Stop The Planet, I Want To Get Off!

Regular User
Its strangely not actually on a footpath so u have to go onto farmers land to find it, likewise the control tower is a little trek across private land.

I was born & bred about 3 miles from Harringworth, Spanhoe airfield used to be one of my routes I rode regular, I know Mr Connant who owns spanhoe, hes a nice chap, of course they still use that for light aircraft
Stop The Planet, I Want To Get Off!
R

Have a great weekend
There's always somewhere to explore and photograph