Regular User
As well as the outdated medical equipment inside, this huge hospital site features some super architectural details you won't see at many other hospitals in the UK. So, although it's far past it's prime, we were still interested in seeing this one.

The Royal Hospital Haslar was founded in 1753 and was designed and built by Theodore Jacobsen between 1946-1961. When it was constructed it was both the largest hospital and brick built building in England. Britain’s first Naval Hospital which span a huge area on the coastline of Gosport is also the site of a massive unmarked grave site with an estimated 7,785 buried sailors. The Hospital was built on Haslar creek just up the coast from the harbour. After the sick and wounded were delivered to the shore from the main battleships they would be loaded onto handcarts and pushed into the main entrance of the hospital where the original tracks are still present to this day leading from the shoreline. The hospital also included an asylum for sailors with psychiatric disorders, and an early superintending psychiatrist was the phrenologist, Dr James Scott (1785–1859), a member of the influential Edinburgh Phrenological Society. This gigantic hospital opened with enough beds to service 1800 patients and cost £100,000 to construct. Because of the high number of deserters from the navy ranks Haslar was built at the end of a peninsula and was originally planned to have 4 sides and the building was designed to be a prison as much as it was a Hospital. There are many reports of escape attempts through sewerage channels that feed out into the sea and through upper floor windows which lead to guard towers being constructed. In 1758 Haslar’s chief surgeon, James Lind discovered the cure for Scurvy which at the time was responsible for the highest number of fatalities of seamen. Although at the time Lind didn’t quite understand the results of his cure and attributed the recovery to other factors and so the cure was not implemented until 1795. In 1805 Haslar Hospital serviced the wounded from the Battle of Trafalgar and, as a result, is sometimes referred to as Nelson’s Hospital. It is thought that some of the sailors unfortunate enough not to survive make up some of the unmarked graves found within a small grassy area on the site. The Hospital Cemetery was supposedly planned out in the initial design phases but with the amount of bodies buried in such a small area it is clear that capacity at some point was vastly exceeded. In 1902 the hospital became known as the Royal Naval Hospital Haslar (abbreviated to RNH Haslar). In 1966, the remit of the hospital expanded to serve all three services – the Royal Navy, Army and Royal Air Force, after which time, it became known as the Royal Military Hospital Haslar. In 2001, the provision of acute healthcare within Royal Hospital Haslar was transferred from the Defence Secondary Care Agency to the NHS Trust. Haslar was also granted Grade II listed status as a historic park. The hospital formally closed in 2009 and the site has since started to be redeveloped. More recently the owners of the site as well as the Ministry of defence were called for comment in respect of the huge amount of medical equipment and machinery which was left behind and both have issued statements advising that the equipment was outdated and would have been uneconomical to relocate and re-commission them. It is worth noting that whilst a lot of the former equipment has been moved from the hospital, however, there are a lot of larger medical machines which one would assume must hold some useful value. It is reported that some of the equipment was shipped off to help in the Pakistan flood appeal in 2010.

Sadly, one of the most iconic features of this site, the padded cell, was locked up and we were unable to see it. The main building, which is constantly getting closer to rennovation into a large residential complex was fairly wide open once we had manoeuvred around the cameras.

I took a lot of pictures of this site, but the majority is just empty, modernised wards so I'll throw in the interesting bits we found in the time we were inside. 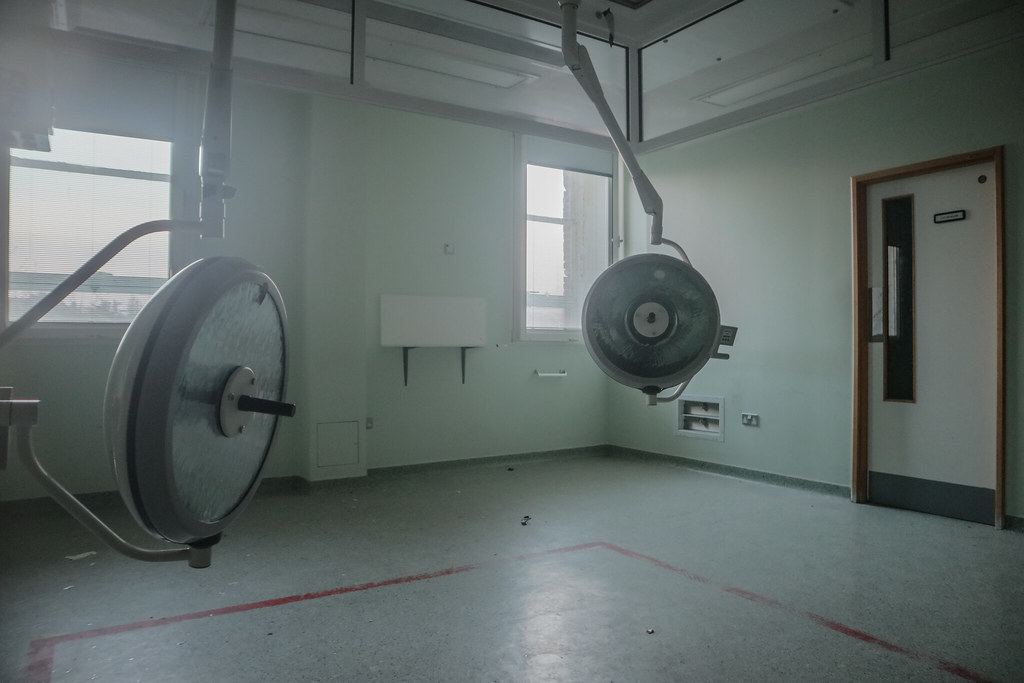 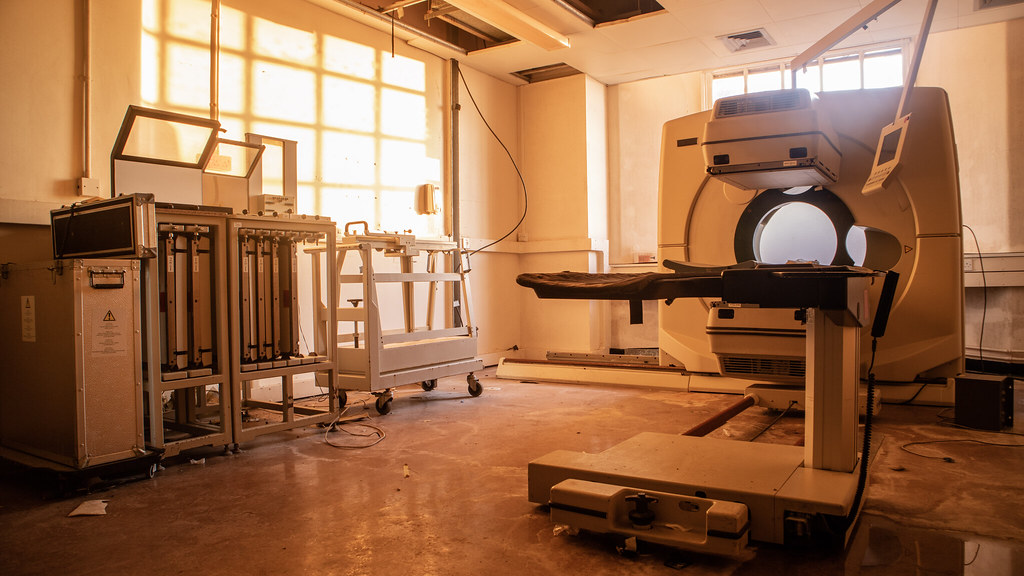 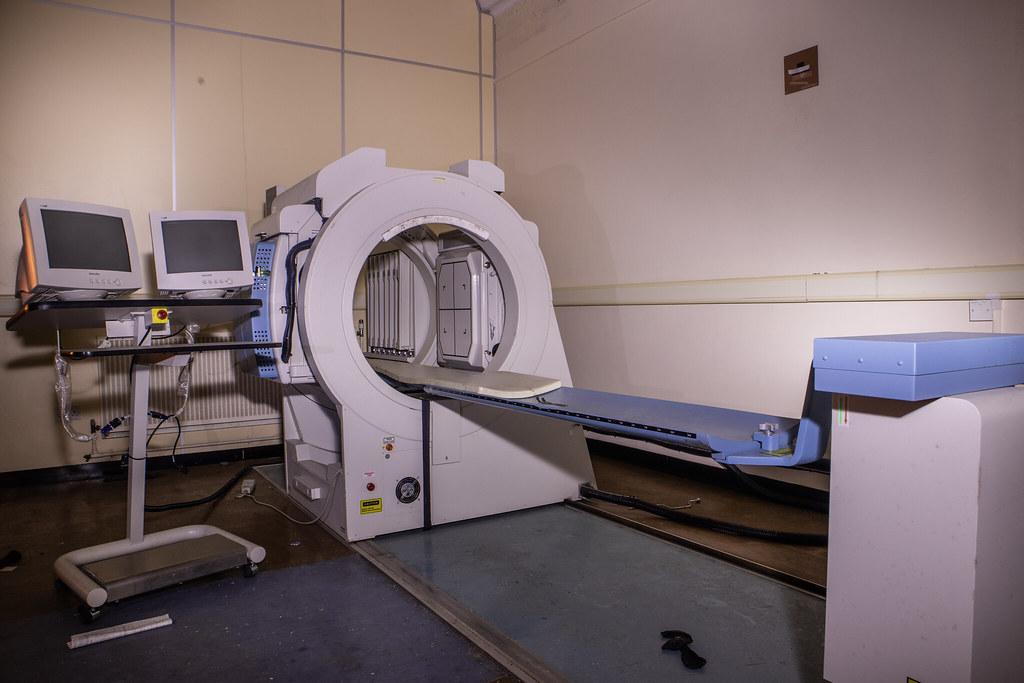 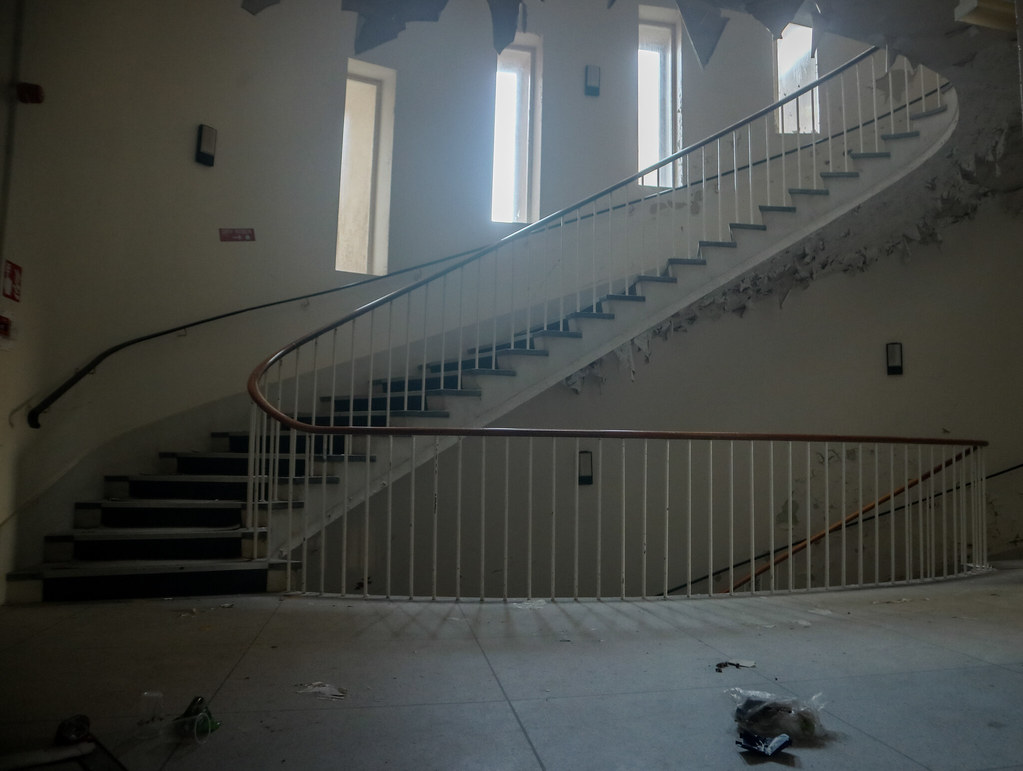 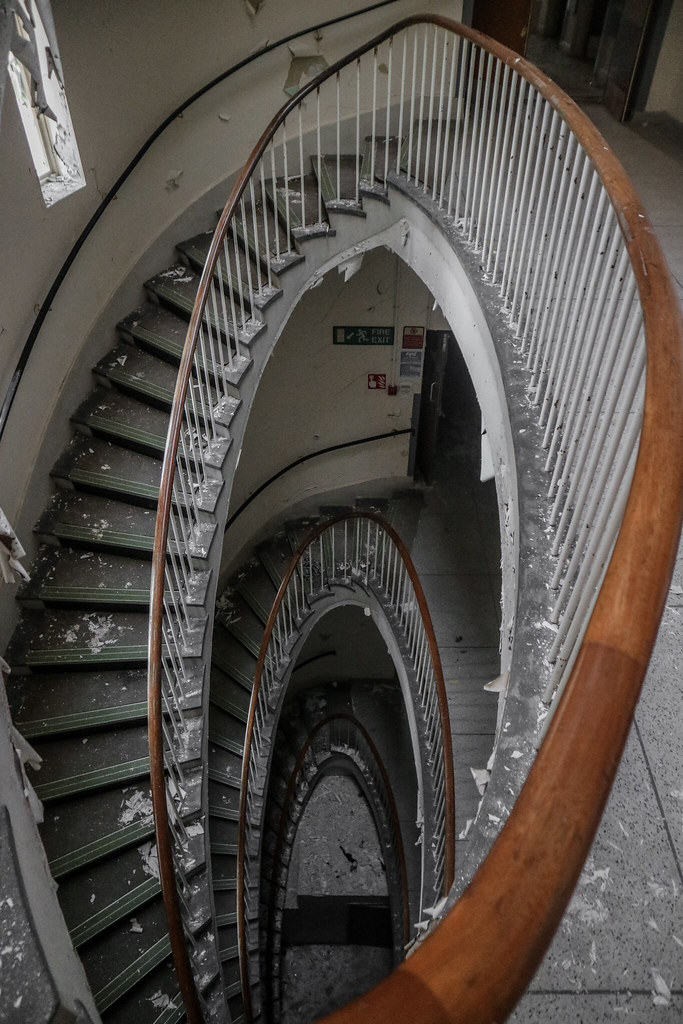 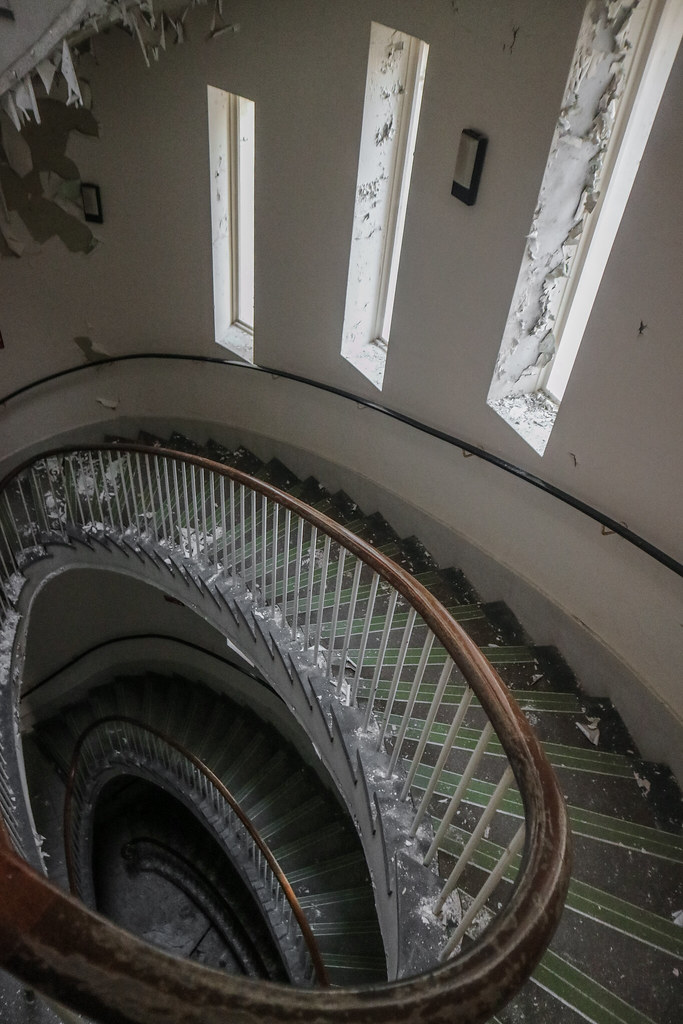 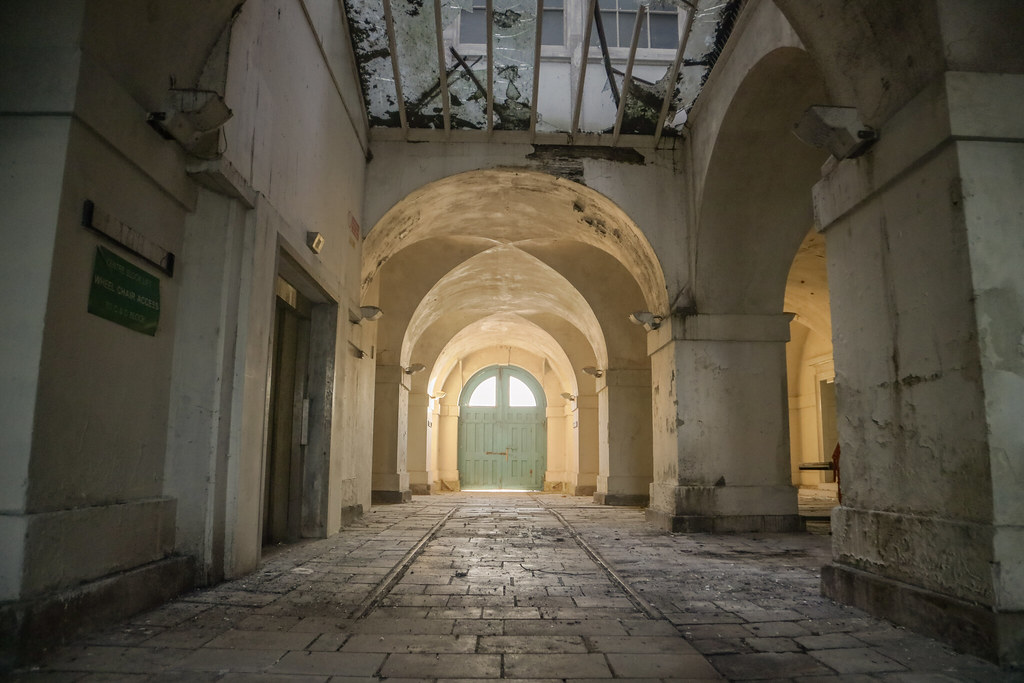 Here's the link to my documentary styled video of our exploration of Haslar Hospital. Thanks a lot to @AndyK for allowing us to use some of his shots of the site in 2014 to present what it looked like back then, and the contrast to now. We cover the property's past, present and future through cinematics and narration:

Regular User
Great to see an update and recent report. Thanks!
eating seeds is a pastime activity.

Over.bex11 said:
is the Hospital still there because me and a couple of friends are planning on traveling to far out of the uk to explore other abandoned things
Click to expand...

The hospital is still there but i dont know how accessible it is anymore..

Regular User
Nice and clean, that stair shot made my head spin, what a great shot

Banned
That's pretty cool are the theatre lights still there then :)
S

28DL Full Member
is the s.e.t.t scuba training tower still there at hms dolphin further down im itching to drone the tower from hayling before its gone. Awesome pics my dad was navy he was treated there for back issues after an accident on base. I wonder if the "source" in that scanner is left in there. A bit worrying if it is they almost never remove it as that alone costs 1000s

Regular User
Great report, always nice to see this one pop up!

Regular User
I'm not happy about that roof. I had heard there was an incident of some kids smashing the roof and explorers got the partial blame. I hadn't actually seen it until now. God I need to go back there
Pictures paint 1000 words - Say no to YouTube.

xexxa said:
I'm not happy about that roof. I had heard there was an incident of some kids smashing the roof and explorers got the partial blame. I hadn't actually seen it until now. God I need to go back there
Click to expand...

only ever done this place at night, need to go during the day, spent a few hours there last weekend I disturbed until we walked out into the middle of a national heritage open day and around 30 old age pensioners giving us disgusted looks lmao

28DL Member
Hey, we are looking to go up here this weekend, however been told that there is security, does anyone have an idea of how we go about getting past them?

Hannah0706 said:
Hey, we are looking to go up here this weekend, however been told that there is security, does anyone have an idea of how we go about getting past them?
Click to expand...