Regular User
Driving back from Chester I saw some dereliction + heras on the left, and pulled over.
Actually I was looking for somewhere to pull over anyway to fix the indicator which had stopped working.
Having switched fuses with a less vital bit of the electrics I then went for a wander, starting with some derelict houses next to where I was parked - a pair of semis and a detached one.
Nothing special - 50s or 60s by the look of them - and had clearly been empty for years. 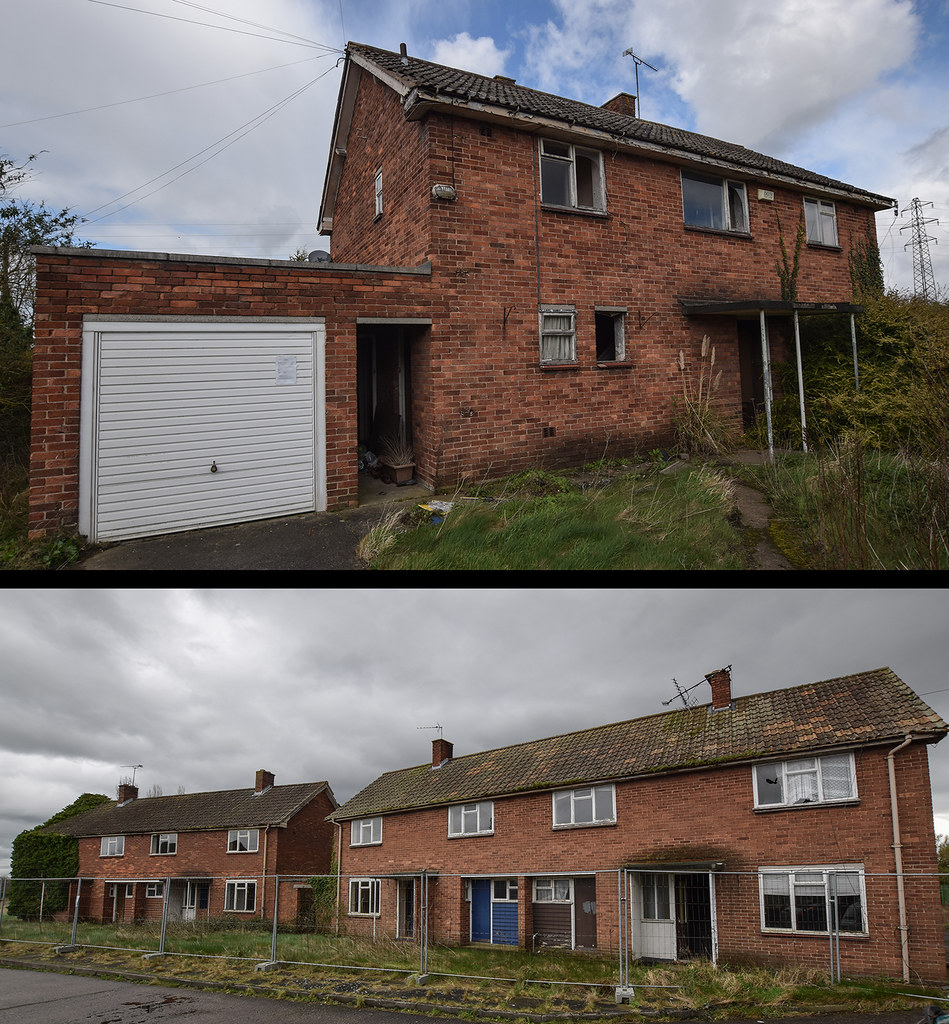 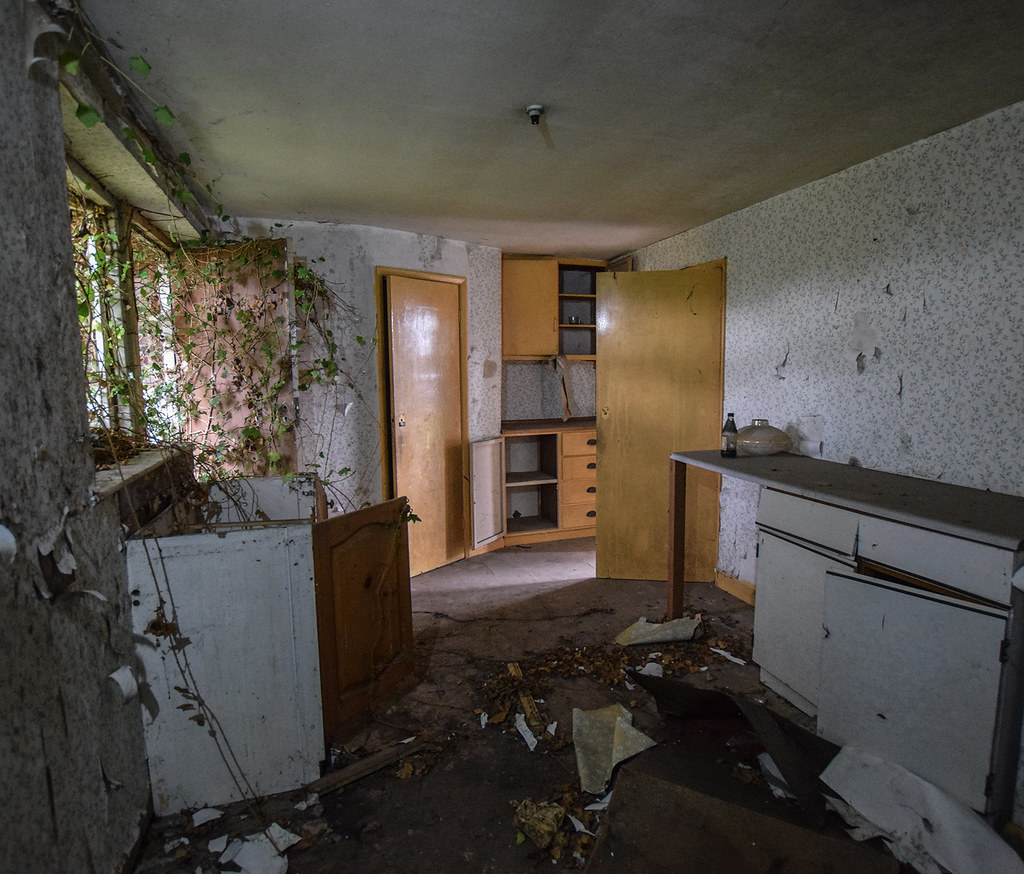 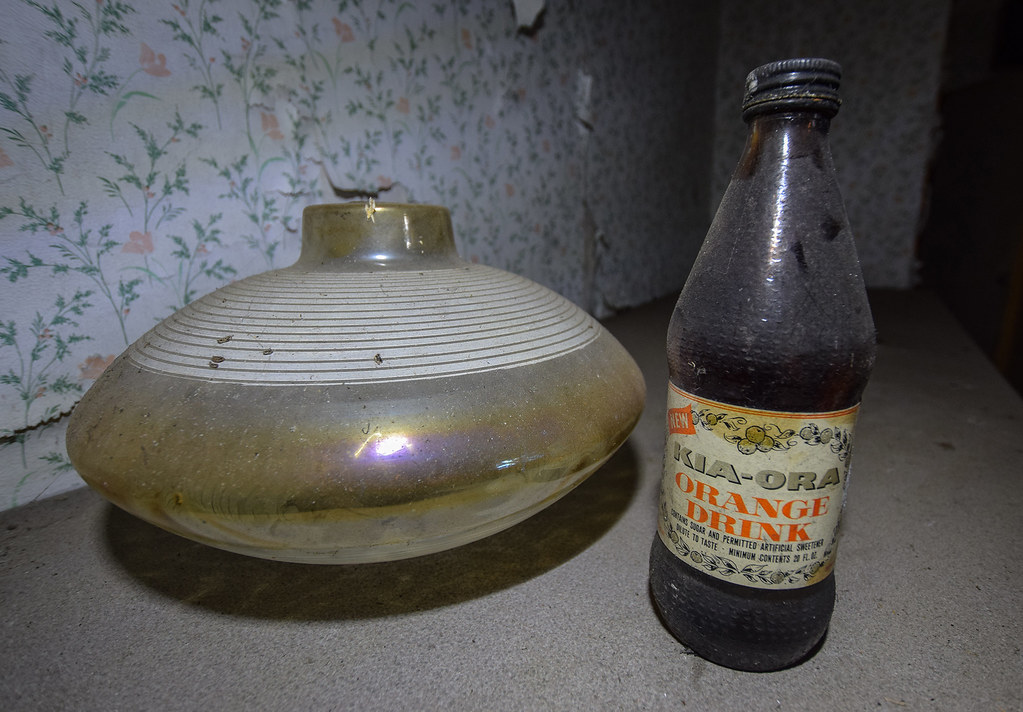 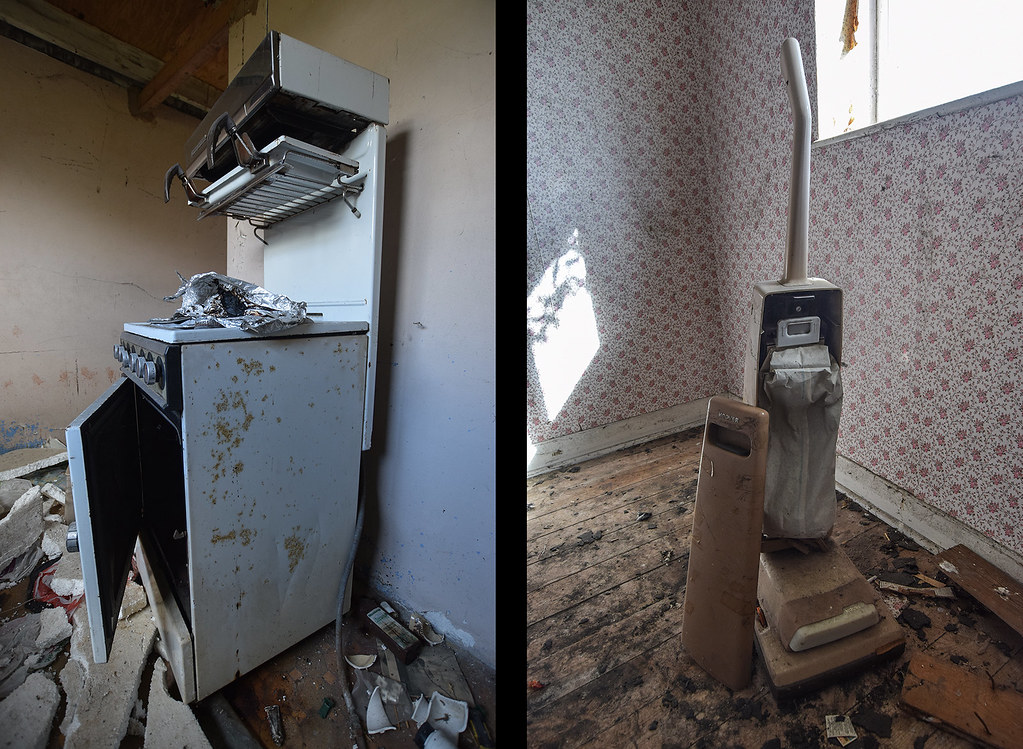 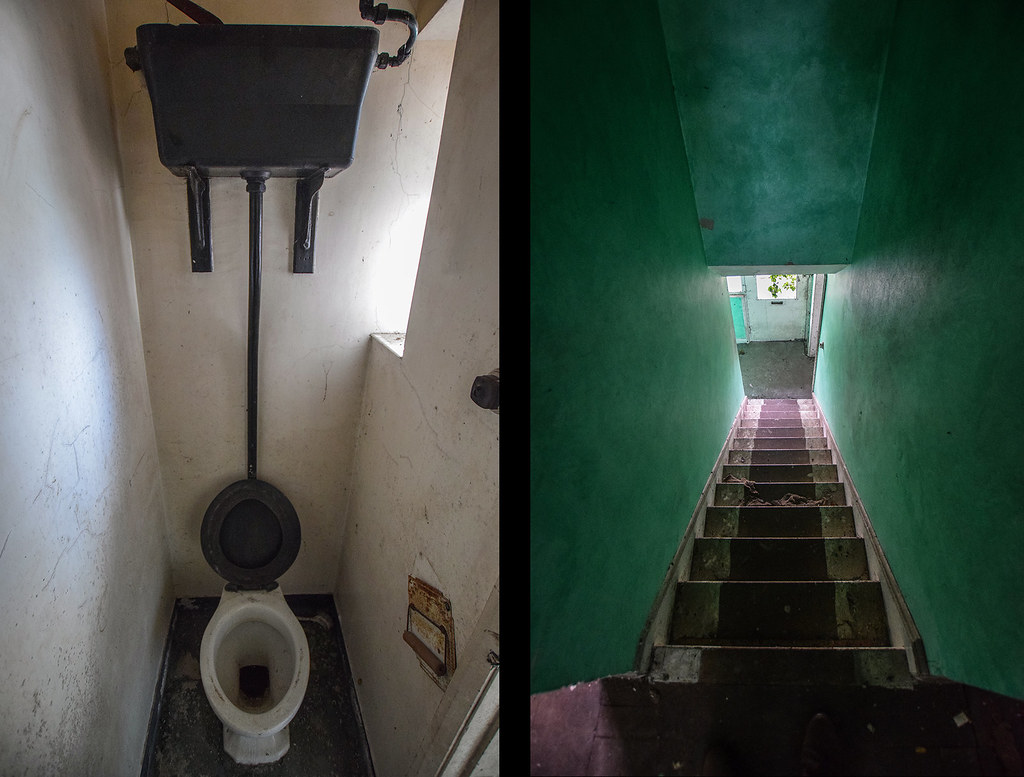 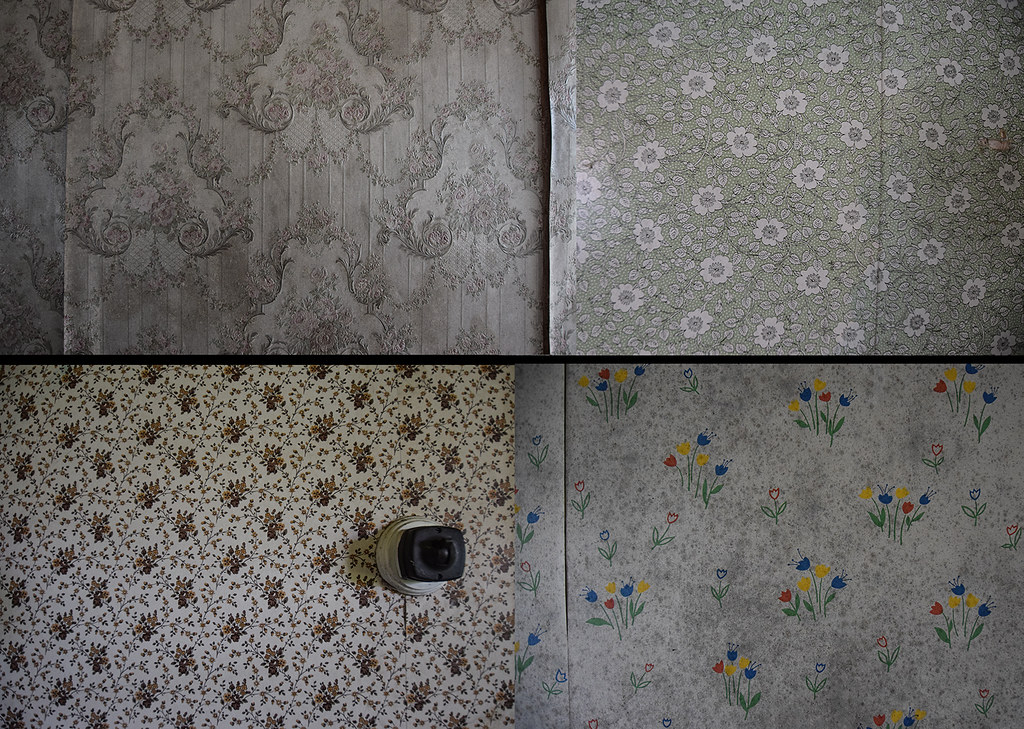 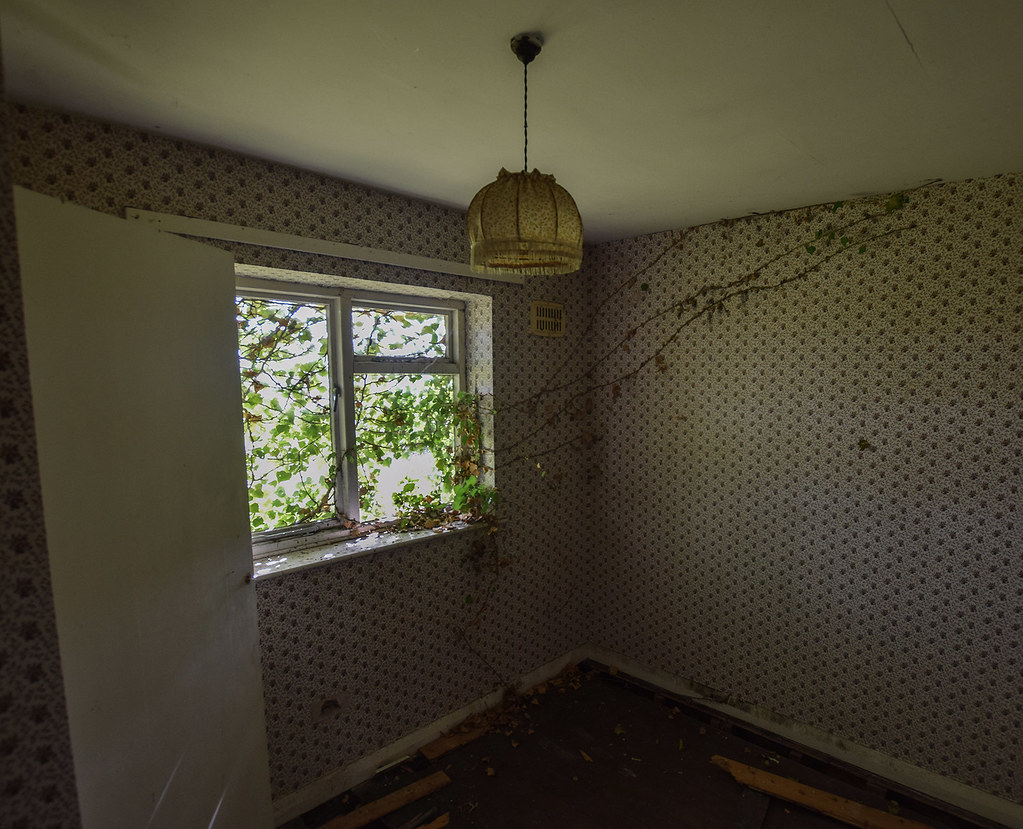 Heading over to a shed in the field next door I assumed this was going to be a regular farm outbuilding.
But after a while it became apparent that it must originally have been something else.
The building is cross-shaped, with three arms of the crucifix containing feeding troughs and the third administrative-type rooms and a little water tower. 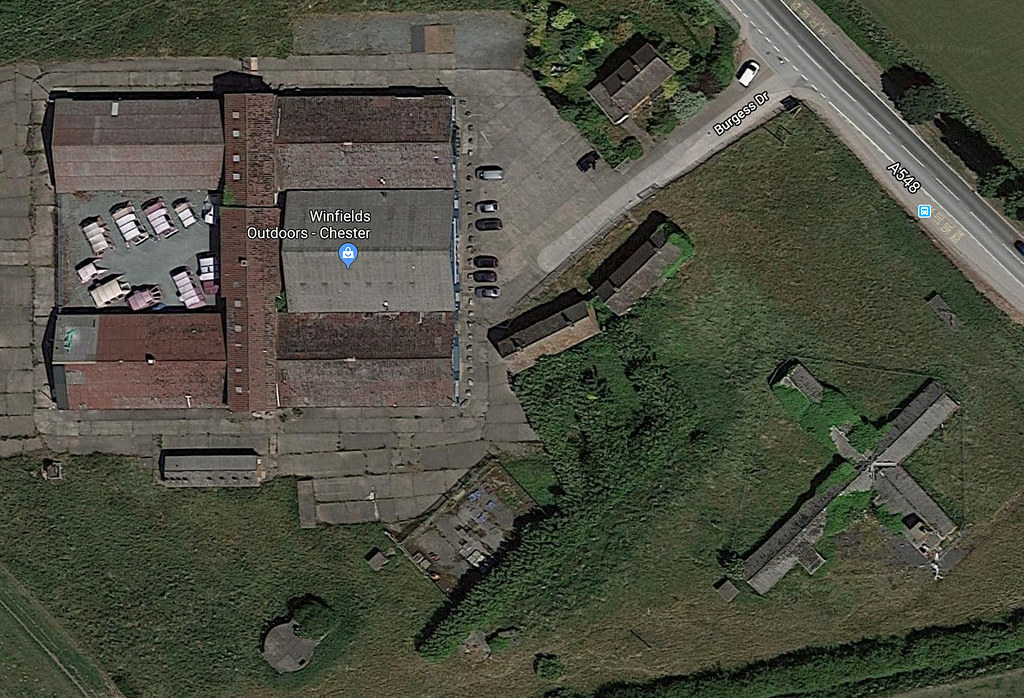 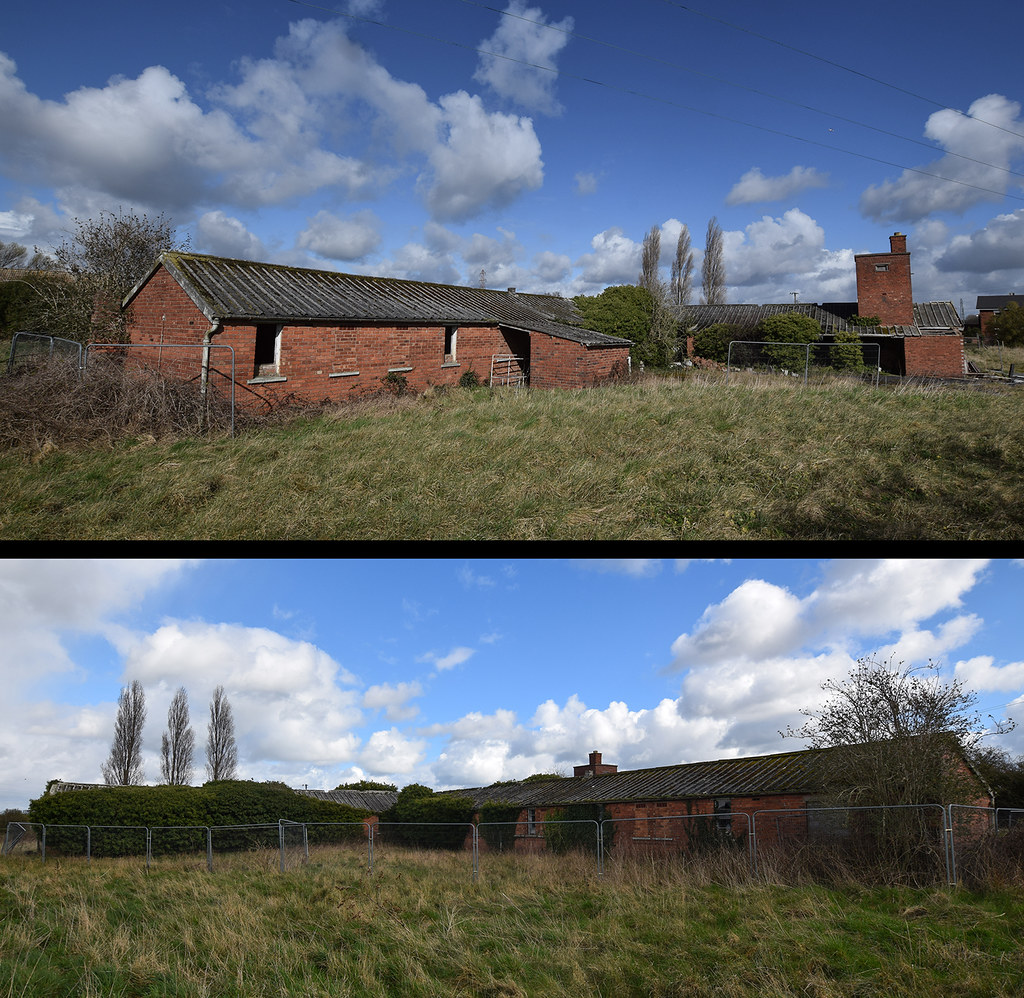 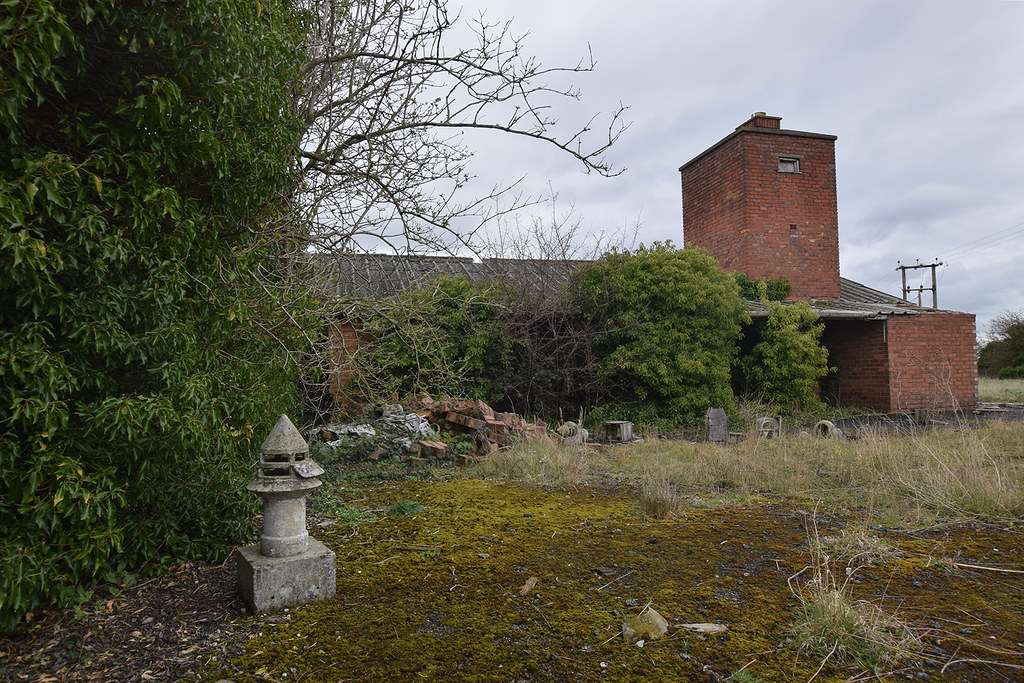 Views down the long arm of the crucifix. 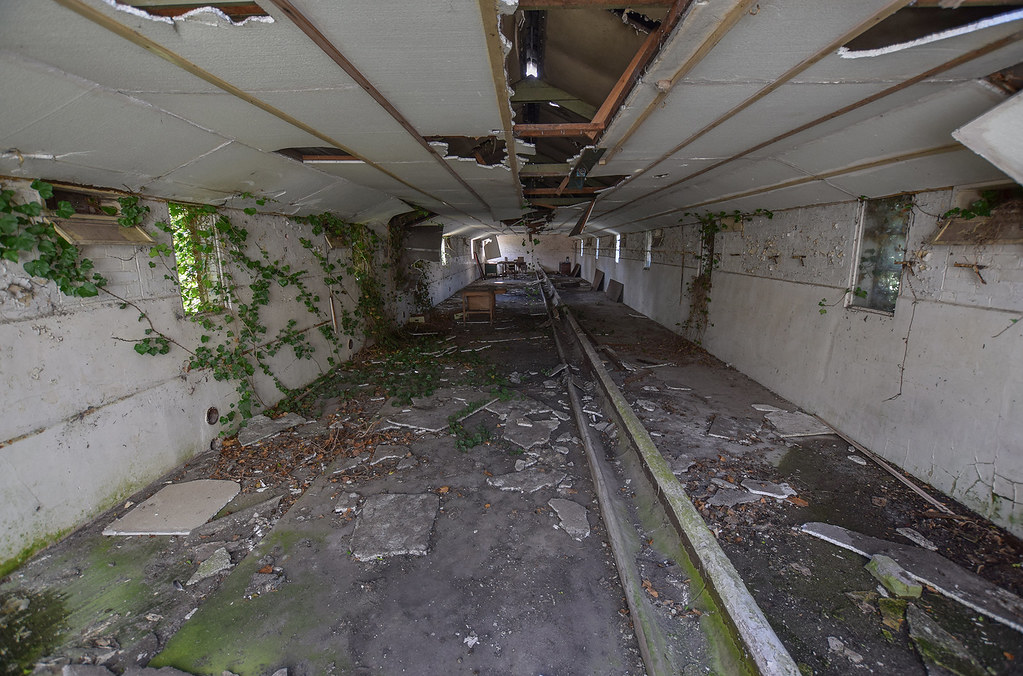 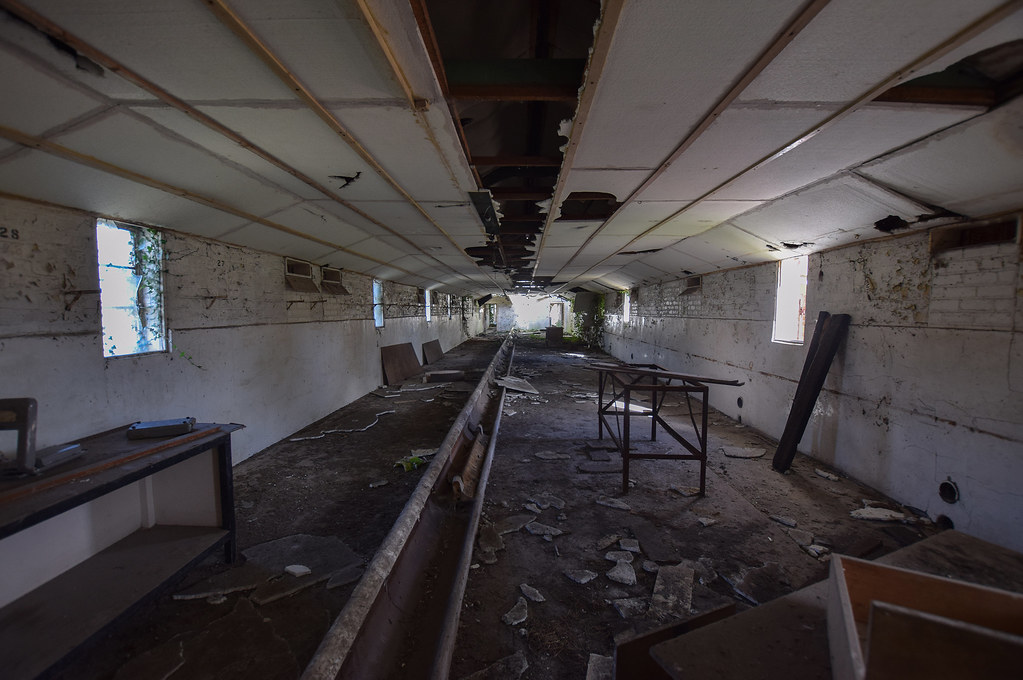 For comparison this is what a cattle shed normally looks like (picture from another derelict farm nearby). 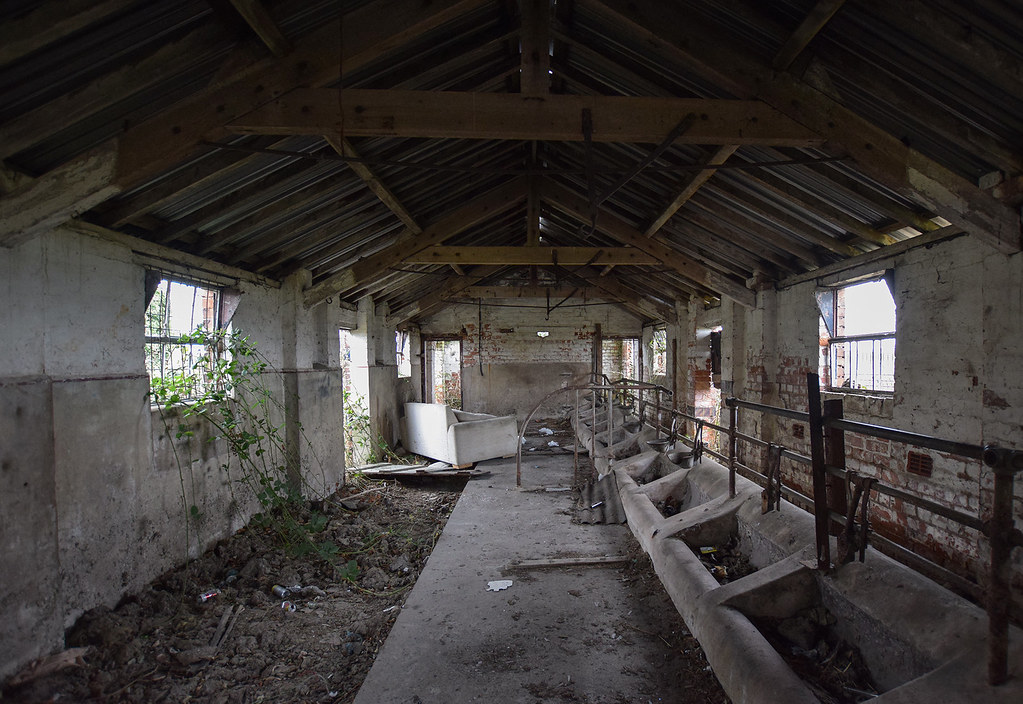 So whatever was fed here was smaller than cows, but the odd thing was the stencilled numbers where the stalls may once have been, with evidence of shelving and ventilation openings. 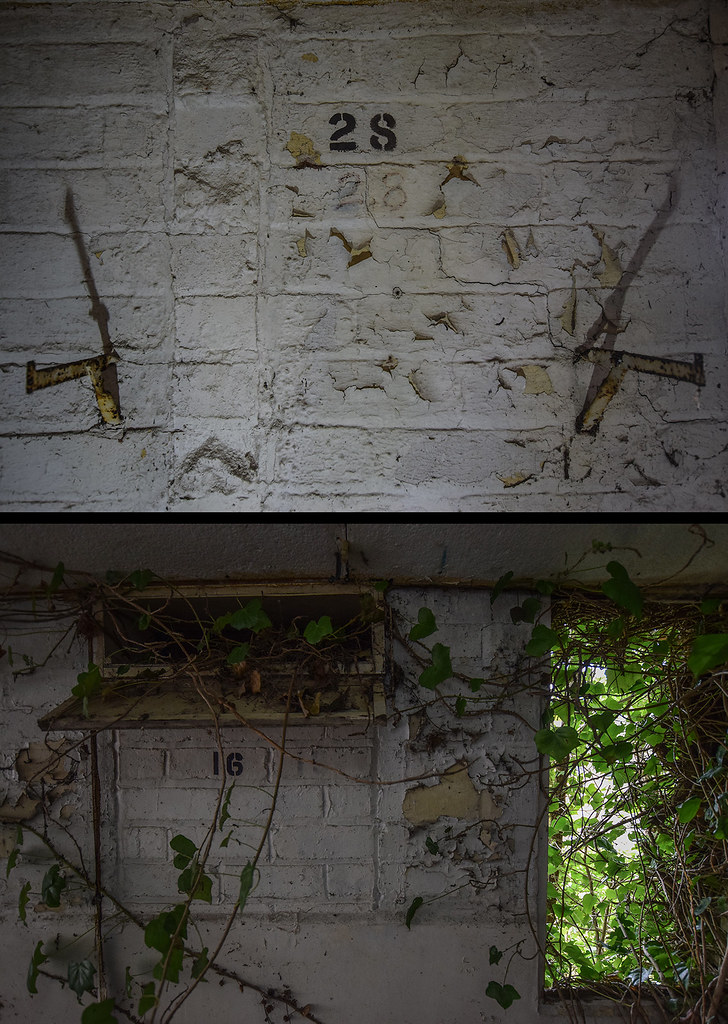 The rest of the place also looked a bit institutional, with more loos than one would expect. 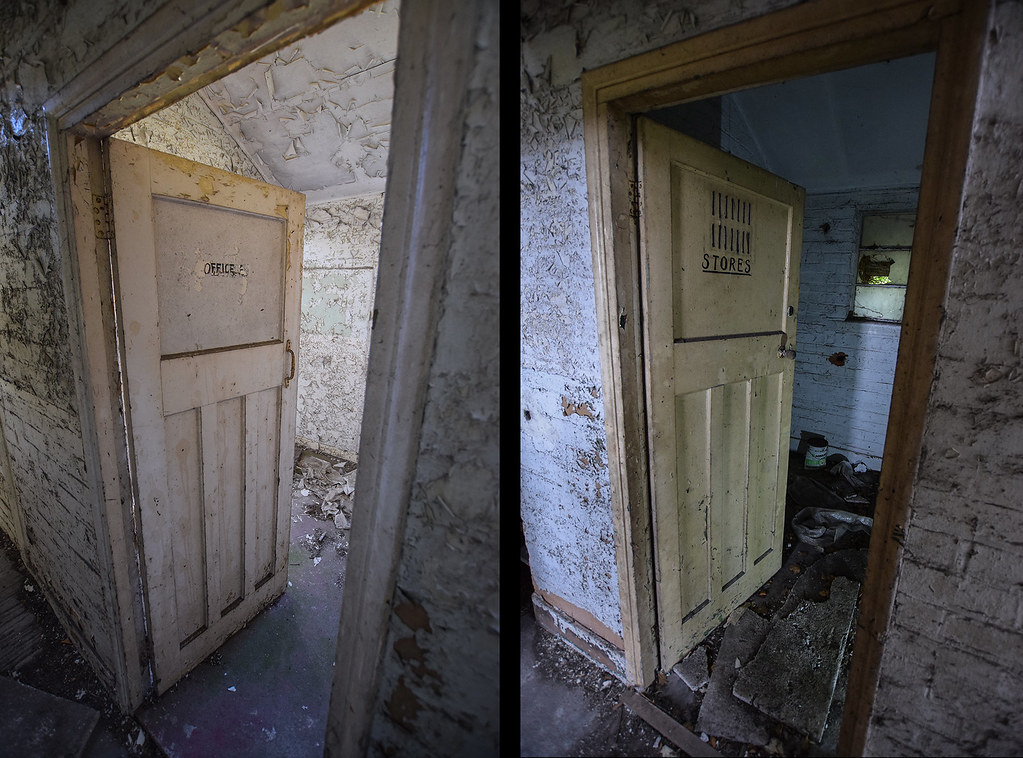 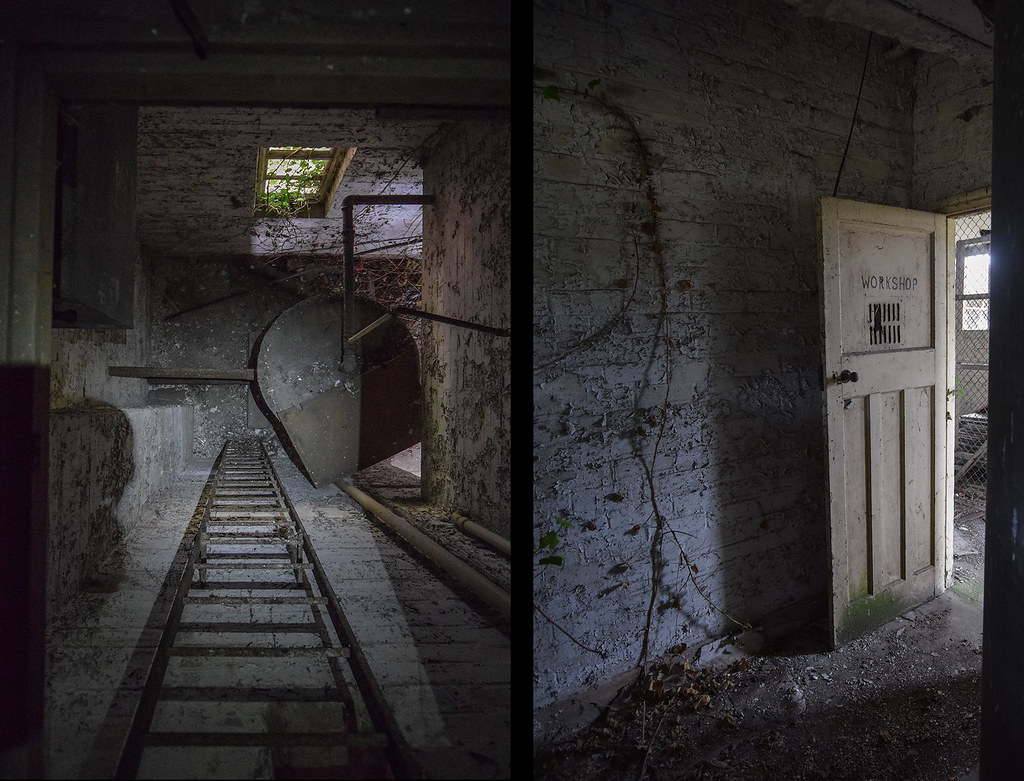 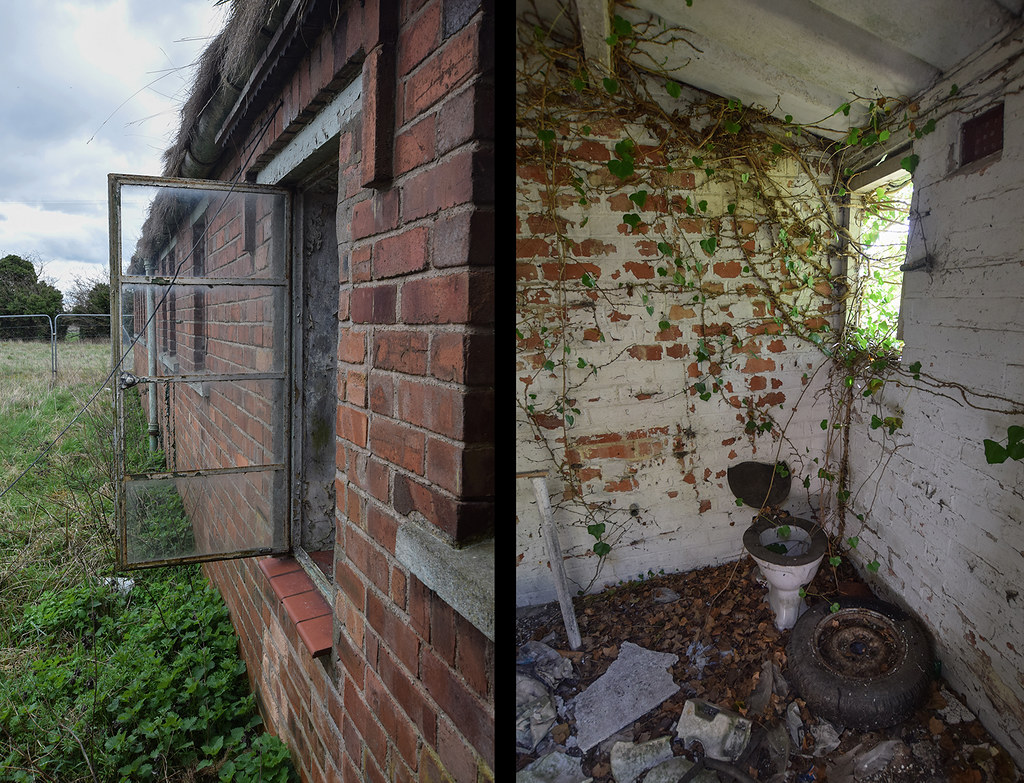 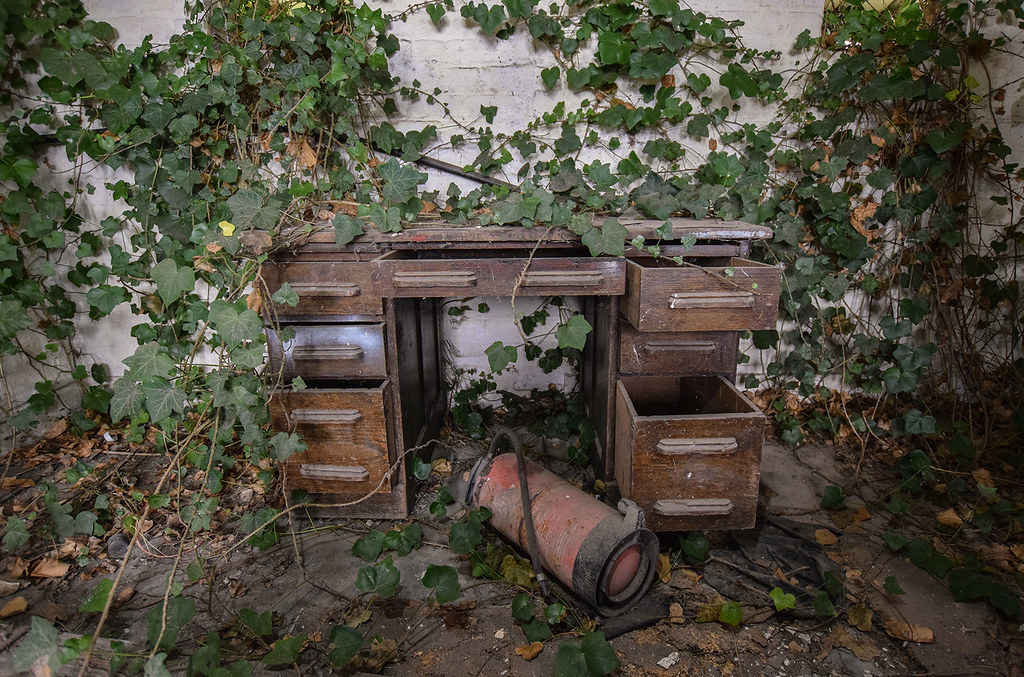 In the field outside there were some more small buildings and remains. The round thing may have been for sewage treatment. 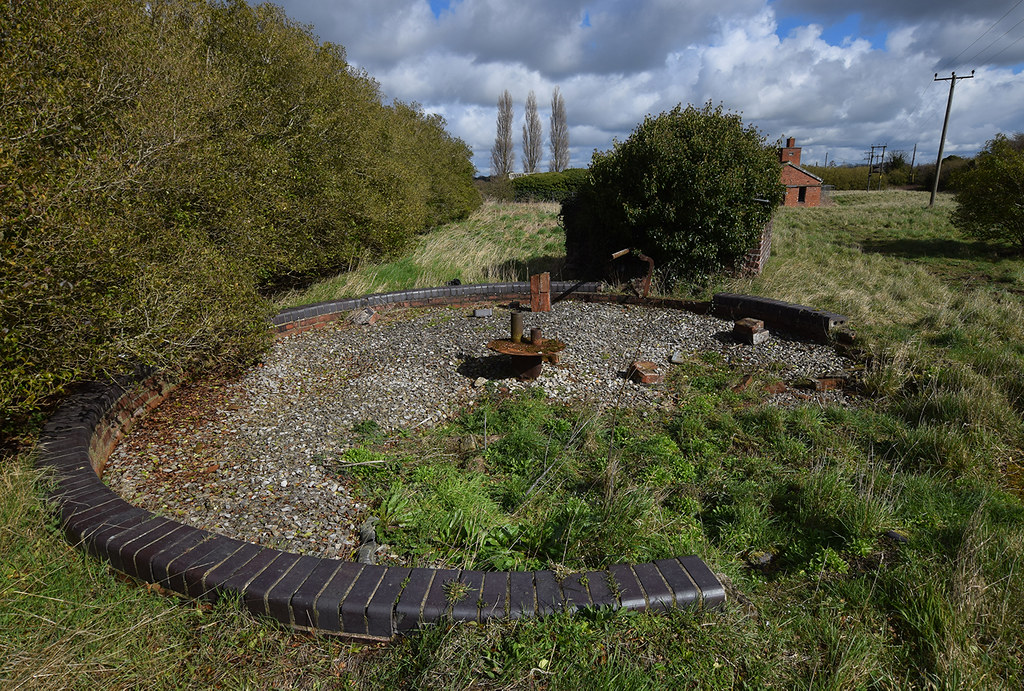 Outside the main building (a Winfields outdoors place) there’s a hut which looks vaguely military. 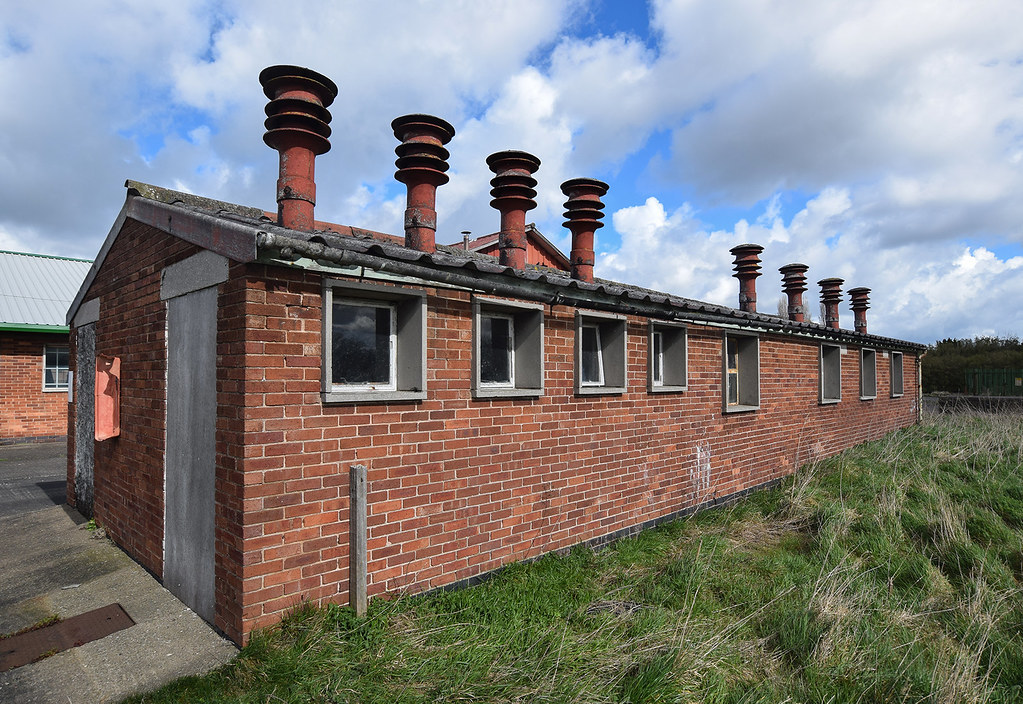 None of this made much sense until I got home and looked it up.
It turns out that the cross-shaped shed was a former Women’s Land Army Hostel and is a listed building.
Site description from https://coflein.gov.uk/en/site/410222/details/former-womens-land-army-hostel-sealand-road

“The Woman’s Land Army (WLA) was formed in 1939 as a response to the outbreak of the Second World War and the need to increase domestic food production and the number of agricultural workers available.
The former Women’s Land Army Hostel is a brick-built, single-storey building to a cruciform plan on a north-south axis.
It has narrow window openings with metal casements, concrete lintels and cills and a corrugated asbestos sheet roof with ventillators.
It was designed in July 1942 by the architect F Roberts of Mold and opened in 1943. It functioned throughout the later stages of the Second World War and closed in 1950. It was later adapted to house livestock.”

It's listed as “…a rare example of a purpose built WLA Hostel, a highly unusual building type, and for surviving in a relatively unaltered condition largely retaining its external appearance and its internal form.” (https://britishlistedbuildings.co.uk/300087601-former-womens-land-army-hostel-sealand#.XI6ZhBP7SQ4)

The main building on the site, now Winfields, is shown as Sealand Station (National Pig Progeny Testing Board) on a 1960 OS map.
Maybe the former dormitories of the hostel were used for the piggies.

The houses, which are due to be demolished, also appear on the map at same time, possibly for housing the MAFF people.
Or they could have been MOD - there’s a large half-empty base (MOD Sealand) at the end of the road.

Regular User
Went opportunity knocks and all that. Nicely broken down lol. Sorry you had car trouble, but glad you fixed it. Some nice photos here. Old semis have a certain look about them, the wallpaper, and fireplaces all very retro or art deco. I quite like them. The WLAs listed buildings are very interesting, I was staring at those troughs for a long time thinking, till I eventually scrolled down and read piggies. What a great history, and impulse explore.

Regular User
Love it when you randomly stumble upon things. Great report and thought that star shaped building looked like it was military. Great finds.

28DL Full Member
Facinating report, i have been meaning to take a look at these for years, your history on the place has filled a few questions for me, thank you

I woke up. The pain and sickness all over me like an animal. Then I realized what it was. The music coming up from the floor was our old friend, Ludwig Van, and the dreaded Ninth Symphony.

"You are young and life is long and there is time to kill today and then one day you find, ten years have got behind, no one told you when to run, you missed the starting gun".
You must log in or register to reply here.
Share:
Facebook Twitter Reddit Pinterest Tumblr WhatsApp Email Link