So first off I should say that this isn’t exactly an ‘ep1c’ or anything, don’t get me wrong. It is, however, something that has been a bit of a thing of conversation over the years as far as talks of Bristol underground go. The only reference/information that seems to be available about it’s existence is a 1/4 page photo in a book. Naturally, this meant we had to find it. This is the one photo I can find of it other than the ones we've taken - just after it's completion: 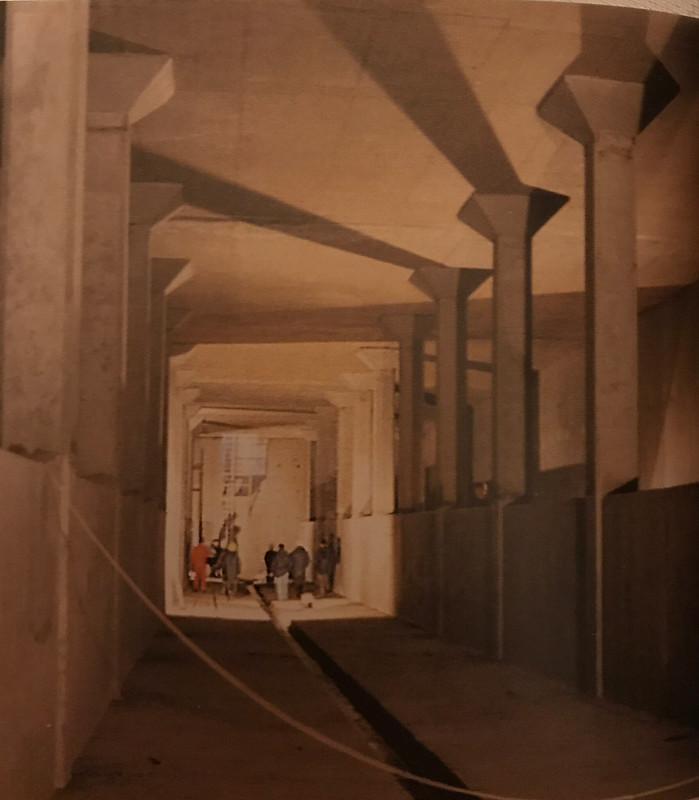 So the tank sits there empty most of the time in reality. It’s only there to control flows greater than the capability of the system. This system is a big one though; a quarter of a million cubic metres of soil and rock were excavated to make it, and it is able to cope with over three and a half million litres a minute.

If more than this needs to travel through it then that is when tanks like this one come into play. Most of the time there’ll be but a mere trickle of water running down the centre of the tank, which means walking around it is dry and easy.

If there is a sudden surge in the surrounding drainage system, a hydrobrake swings into action. The tank will then fill up and the flow is very slowly released, thus preventing flooding downstream in the centre of Bristol. 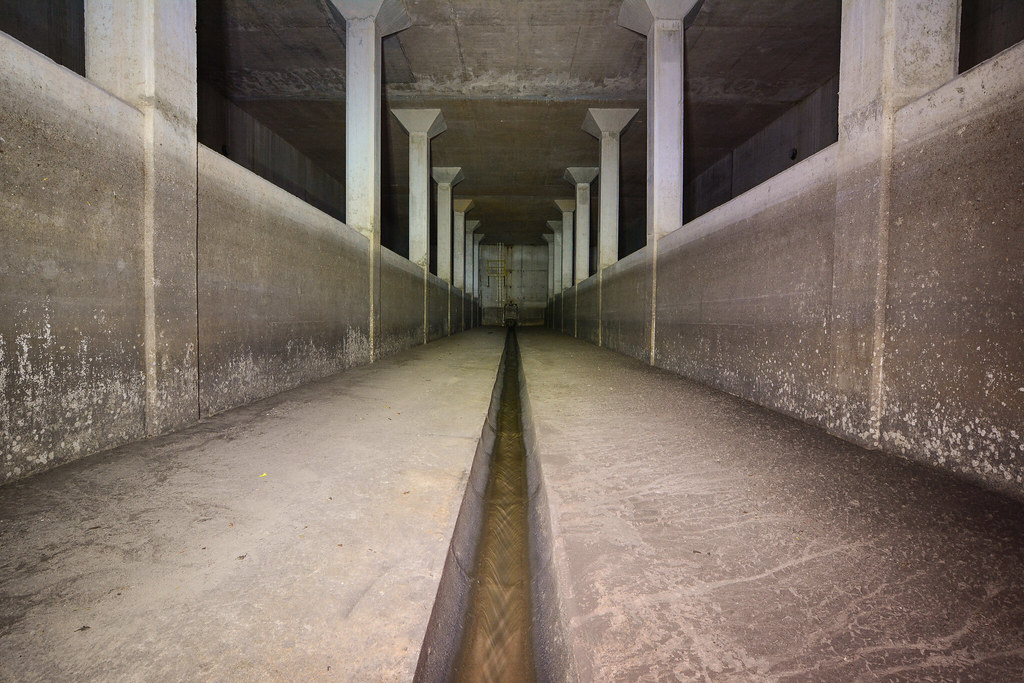 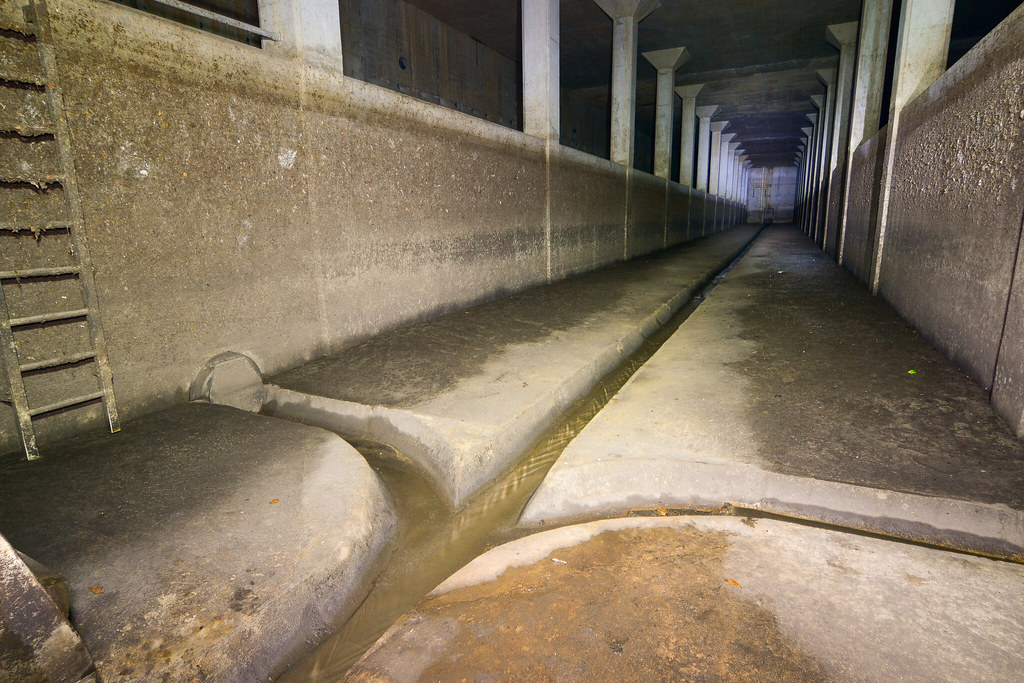 Note the motorised flap. This will open and close as required. One of us did climb into this pipe but weren't able to see much round the corner without wadorz.. 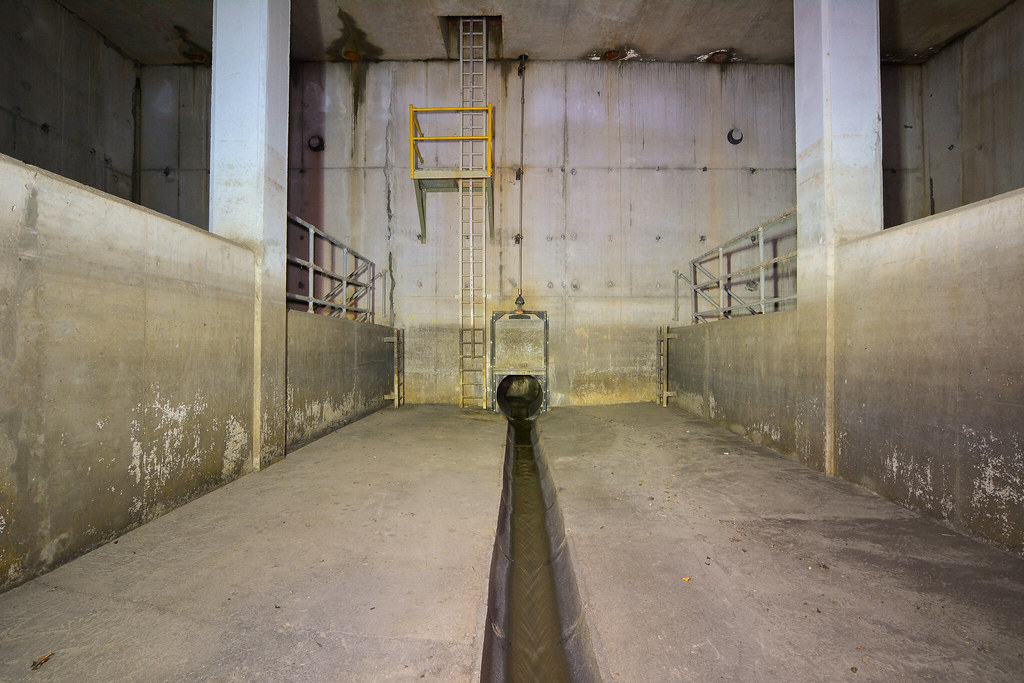 This is looking at the other end of the tank, where it drains out. Note the cone shaped object - it would appear this slows down/stops the outflow accordingly. 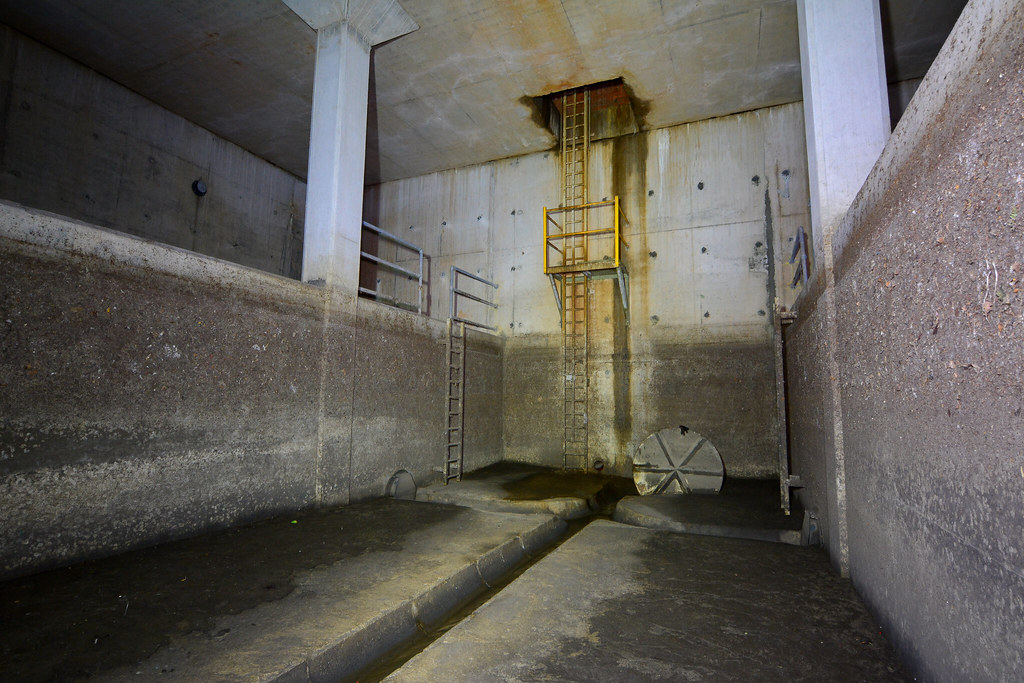 The tank is pretty damn big, and photos don’t do it justice really even with a wide angle. It’s 256ft long, 59ft wide and 21ft high. It’s described in the book as being like a temple, and I would agree. It’s almost kind of eerie seeing it ahead of you when you climb down that ladder and turn around. The echoes are something else!

The tank is split into three sections. This can make taking photos a bit more difficult it has to be said! The sides are used when the flow becomes greater than the height of the partitions running down the centre, and is fed back into the central section through flaps in the floor. This photo is taken looking down from the ladder into one of the side sections: 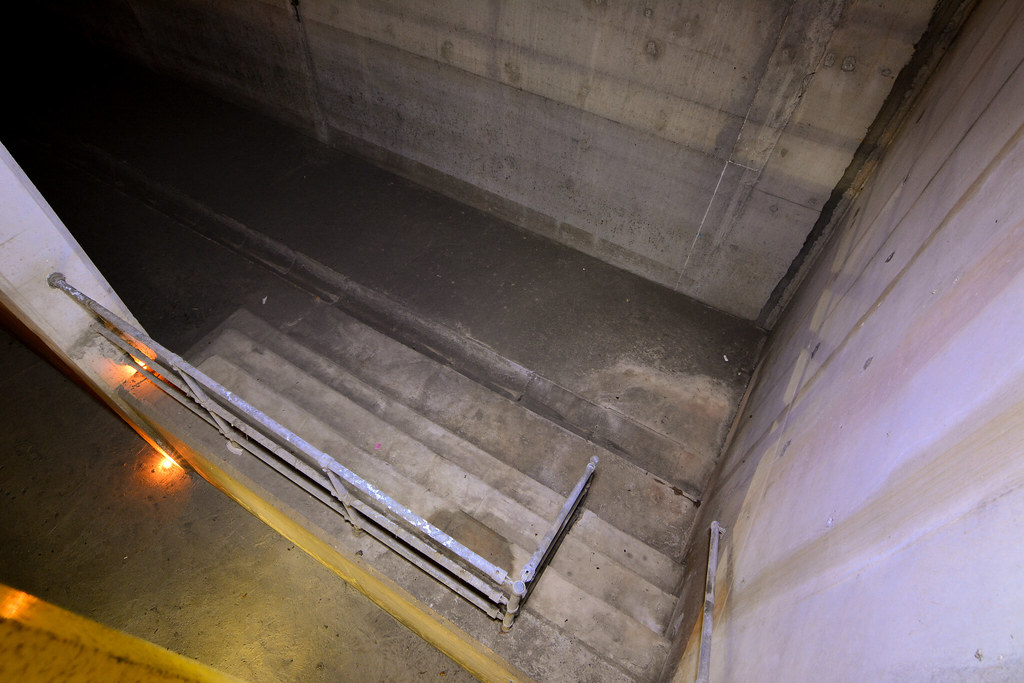 And looking up the ladder at one end: 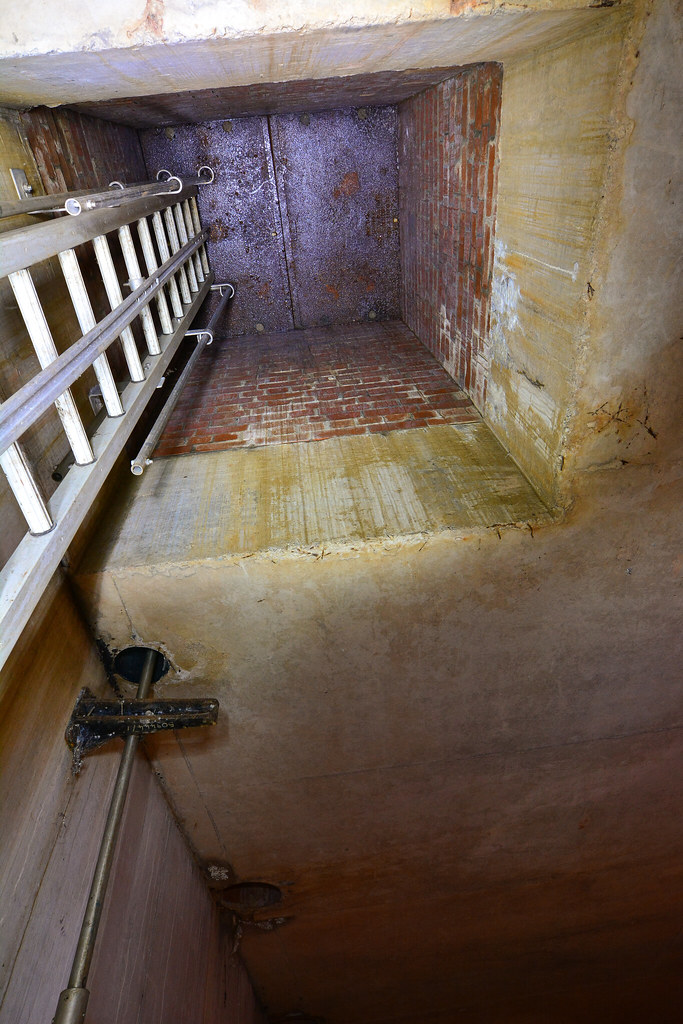 We spent a bit of time wandering around the and lifting lids etc back in 2015, but to no avail. It was only when @wellingtonian messaged me after he read about it asking if I knew anything about it that I remembered it was there. He came up to Bris and we had another look. After a good hour of getting covered in mud and water, we found what we were looking for. May have got a tad excited about finding this if I’m honest… Cue the lumens and tealights 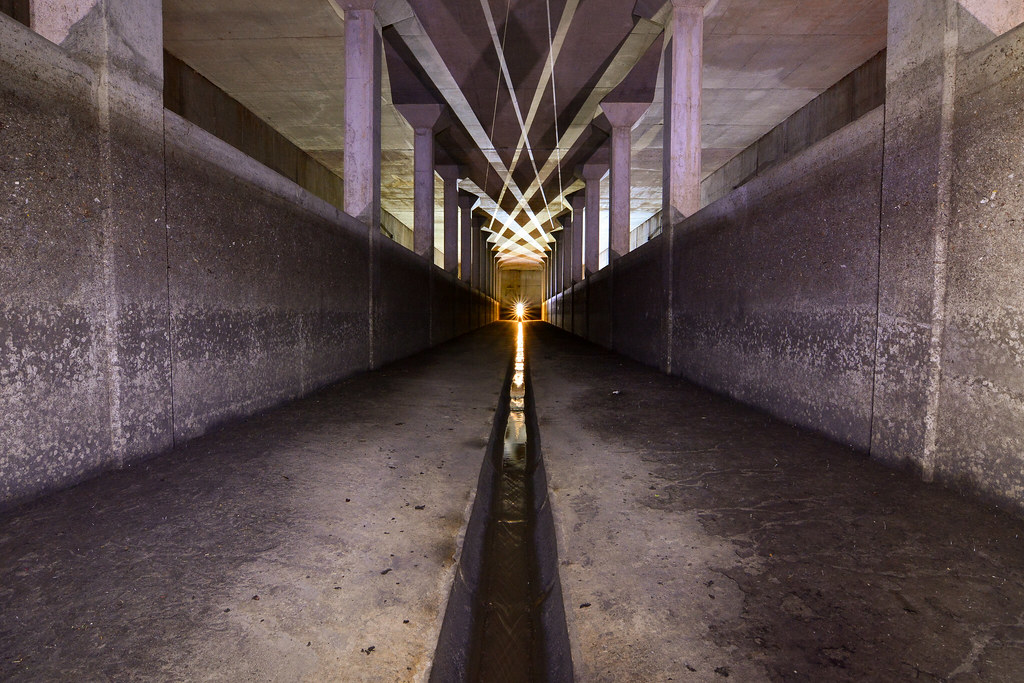 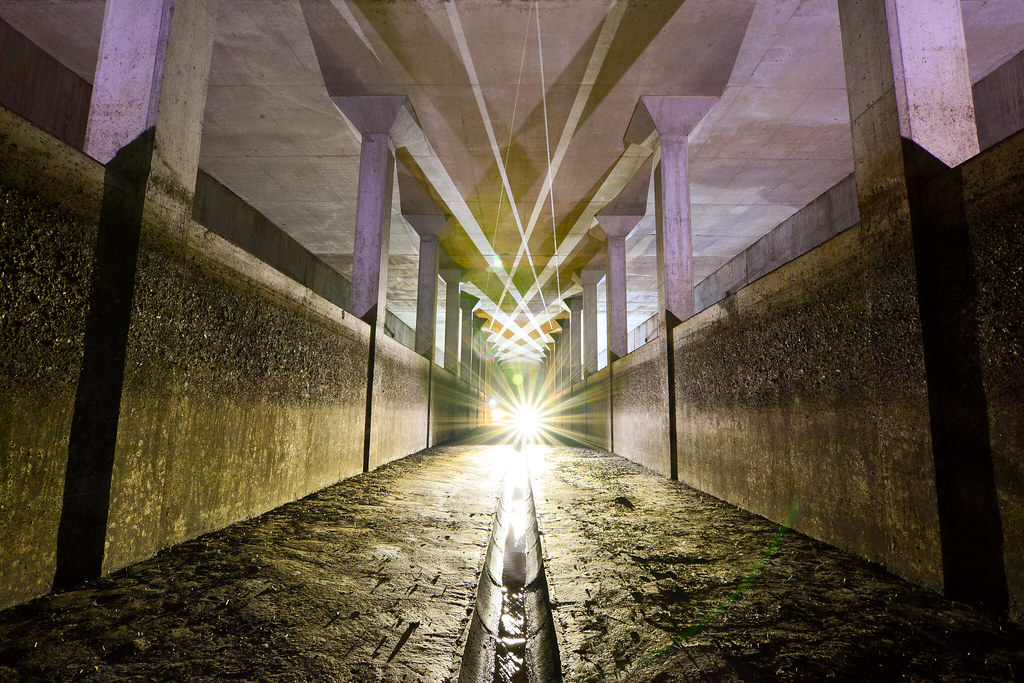 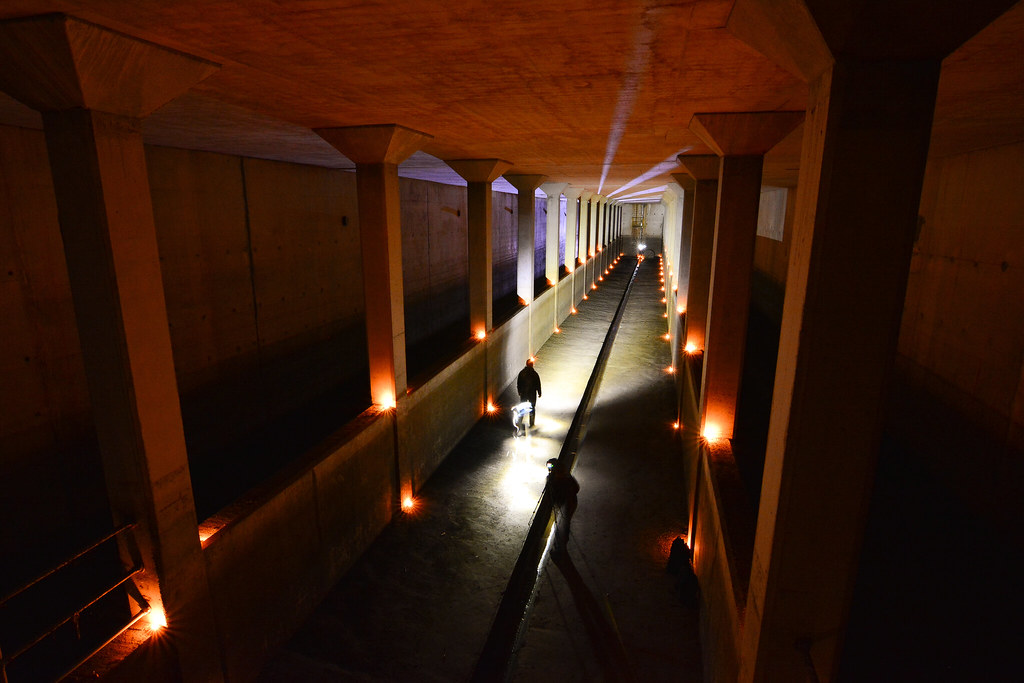 Thanks for reading. Good to have something new coming from underneath this city, even if it's only a small part of it!

Regular User
Nicely done @Seffy. Had a few laughs that night, and came up with the goods in the end

Regular User
Gotta love the ladder down with shit crusted all over it. It's an awesome cathedral of shit for sure, great to finally see it

Regular User
Had a few Mooch's trying to gain access and after we were convinced we knew the access point, turns out it would of been a dead end.

Seeing it with all those tea lights was good. Nice reporting too.
www.strayoffthepath.co.uk

WhoDaresWins said:
Had a few Mooch's trying to gain access and after we were convinced we knew the access point, turns out it would of been a dead end.

Seeing it with all those tea lights was good. Nice reporting too.
Click to expand...

It’s concrete floor under that lid lads. Maybe not

WhoDaresWins said:
Had a few Mooch's trying to gain access and after we were convinced we knew the access point, turns out it would of been a dead end..
Click to expand...

Proved to be a bit of a red herring for sure. I reckon that particular feature might be used to measure the depth of the water whilst the tank is in use, without having to lift any lids. Hence the vent in the floor. Just a thought like.
P