28DL Full Member
After reading an article this morning about how building work was soon to begin at the old site of the American Adventure, I decided to take the long drive there to see the place one last time. A place that holds a lot of great childhood memories, the first place I ever rode a rollercoaster (the missile), a place I haven't been since....93 or 94.

This also happens to be my very first exploration, even though I'm a long time lurker of this forum.

I know Daftlad did a report 2 years ago, which I had seen a few times....I actually purposely took some photos in almost the exact same place as him to see the 2 year change.

This is how the park looked around the time it closed..... 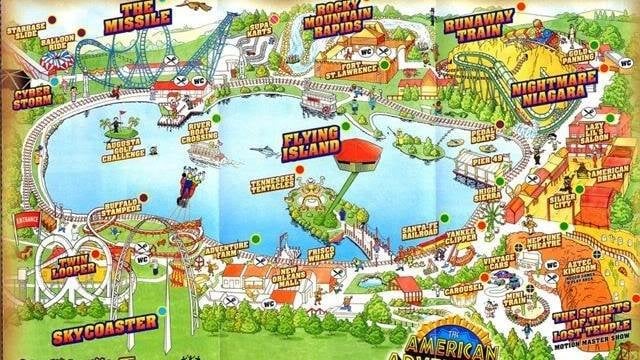 First thing you'll notice is that nature has reclaimed much of the site, the reeds, bushes etc are so high in places it's like a maze, 10-15 feet in general. Sad to know the beautiful area will soon be the location of nothing but rich folks homes....anyway.....

This is the road in, their used to be a sign on the left welcoming you but that is long gone. All the car parks are still there, being slowly reclaimed by nature. The main path to the entrance. The old entrance, photo taken over the metal fence. The coal thingy is the only building still standing. The base of a hut like building but I'm having trouble working out what it was. The Augusta Golf Challenge Tee, where you could win huge prizes if you got a hole in one. The area near where the twin looper once stood People are not happy about the houses which are going to be built on the land next year.... A random track wheel....no idea what it came off, but it was in the twin looper area. Can't really read the words now, but it's something along the line of 'stand behind the white line' as the train track is directly in front of it. The base of silver city....where all the cowboys and indian shows took place. The area of the Yankee Clipper and High Sierra View from the top of the main steps Site of the Aztec City The site of the old log flume, at one time the largest in Eruope I drove past today and figured I'd throw my drone up there, it's pretty much gone, they started preparing to build a while ago now