Situated at the side of the A701 on the scenic route through the Scottish borders sits The Crook Inn. The widely acclaimed "oldest inn in Scotland" was first licensed in 1604. The inn most likely started as a refuge for drovers and a meeting place for local shepherds in Tweedsmuir, which at the was "sparsely populated and lawless". Little history follows from it's licensing date apart from the fact the Inn became a church briefly in 1688 and that the Scottish poet, Robert Burns wrote "Willie Wastle's Wife" there. If you wish to have a read of the poem you can do so here: http://www.robertburns.org/works/368.shtml

In 1891, the first official meeting of the Scottish Mountaineering Club set off from The Crook Inn to ascend 840m to the top of Broad Law.

A few years later and the Talla Railway was built in 1895-1897 to aid the construction of the Talla Reservoir, which was used to serve the water demand of Edinburgh at the time. Due to the railway and the reservoir being close by, the inn was utilised by the workers at the reservoir and previously by the workers who constructed the railway.
In 1936, the Inn had was refurbished in the Art-Deco style by a Glasgow architect called James Taylor. This re-vamp saw an addition of the flat roof balcony seen out the front of the property, curved windows and the tiled bathrooms. These were the best parts to see in my opinion. 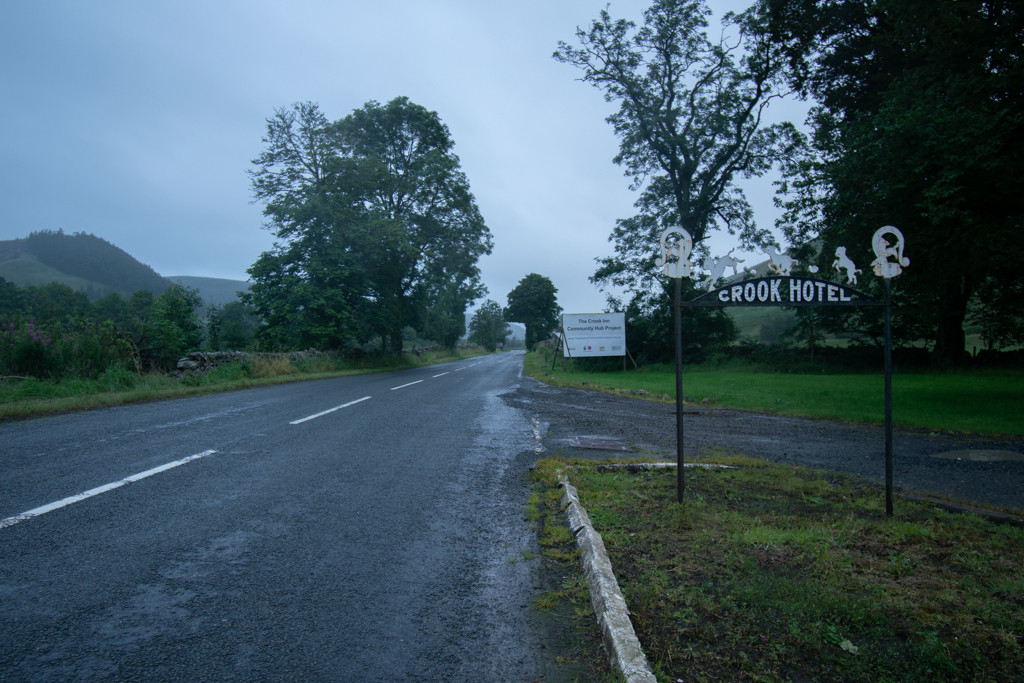 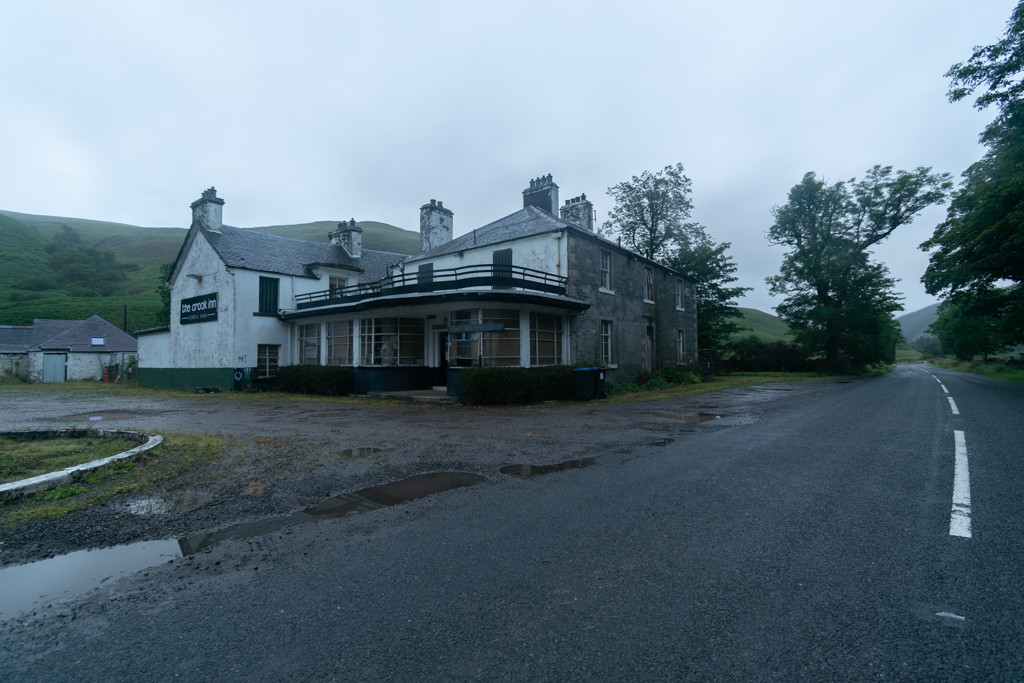 The site was a meeting point for vintage rally cars, and you can see from the following photo that the crook inn sign remains the same today. 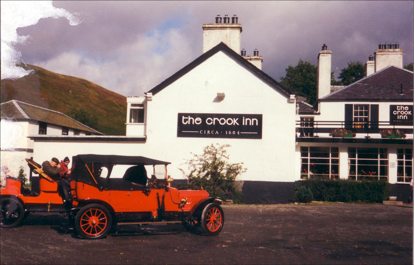 Across the road from the Inn were a set of Art-Deco gardens added when the refurb went ahead. 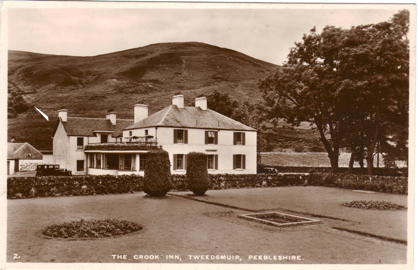 The gate leading you into the gardens still remains branded with the "CH" for Crook Hotel. 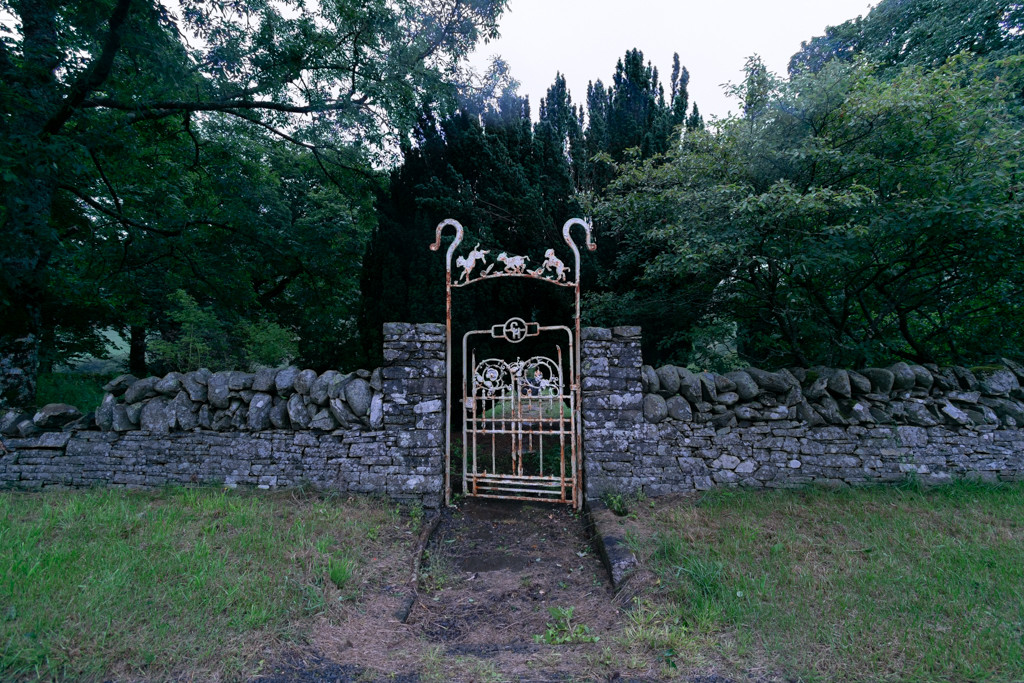 The Crook Inn had 13 bedrooms and a bunkhouse, which may have been used by the Talla labourers. An outbuilding was constructed to house batteries and a generator in the 1930s-40s before electricity was introduced into Tweedsmuir. You can see the old outbuildings in this photograph: 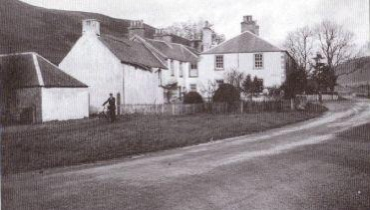 On our lengthy drive up towards the Scottish capital and beyond with @UrbandonedTeam and @DustySensorPhotography , we spotted The Crook Inn. Due to us being on a tight schedule we made a mental note to return if we ended up on the same route home. After a successful trip we dropped @DustySensorPhotography off for his 8 hour train journey home (ouch) and the time came to start the journey back and sure enough we were going past it. After only failing on the final day, we thought we might as well try and accomplish something and pulled over at the inn. After a brief rescue mission with a guy called Bill who got his car stuck camping in the expanses of fields opposite, we began our entrance. With the site being so secluded, we got in easily and began what we thought would be a relaxing explore. However, moments after getting our cameras and tripods set up, two work vans arrived outside the main entrance. The workers hopped out the vans in orange hi-vis jackets and began pointing at the building. A few tense minutes passed not knowing whether a bunch of men were about to unlock the main door, but luckily enough they got back in their vehicles and drove off, leaving us to explore the place fully. I was lucky the shots came out okay as previously on the trip I had got my camera wet causing the screen to have some water damage, which made focusing in dark rooms slightly challenging.


The curved art-deco windows can be seen here outside the main entrance. 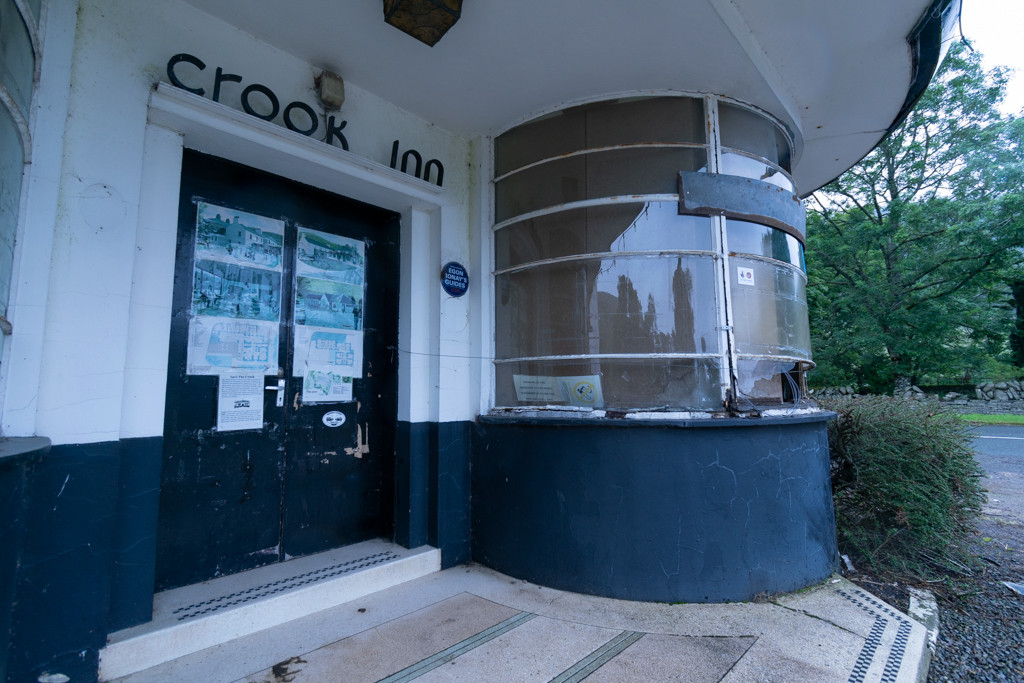 Reception was a small cramped room but still had the old computer and monitor along with an array of different items. 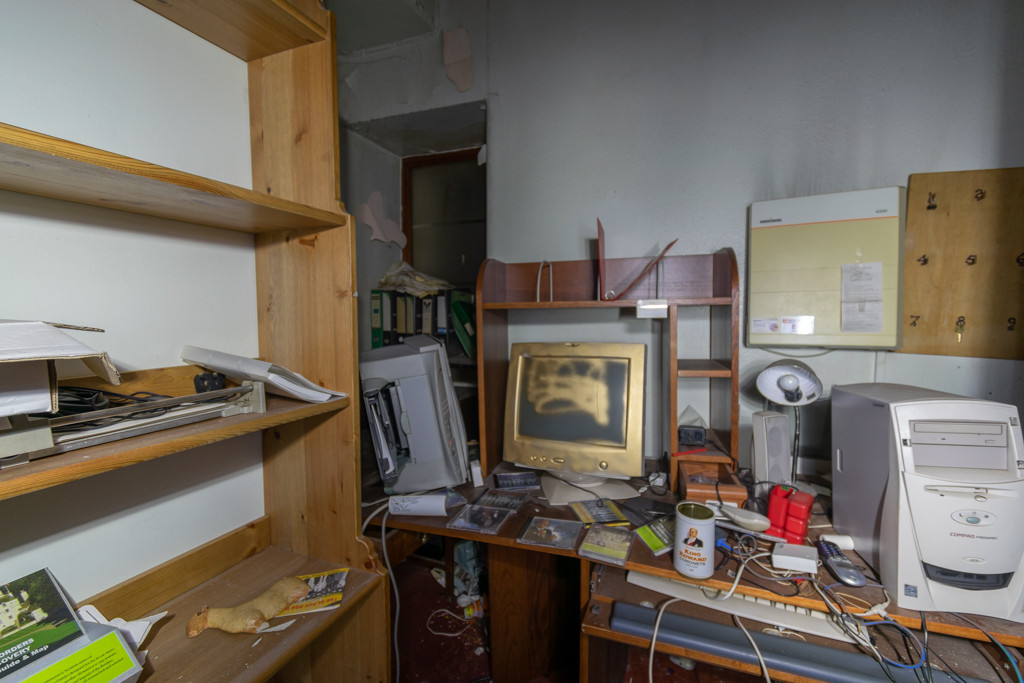 The larger rooms on the lower floors were packed with furniture and other items. 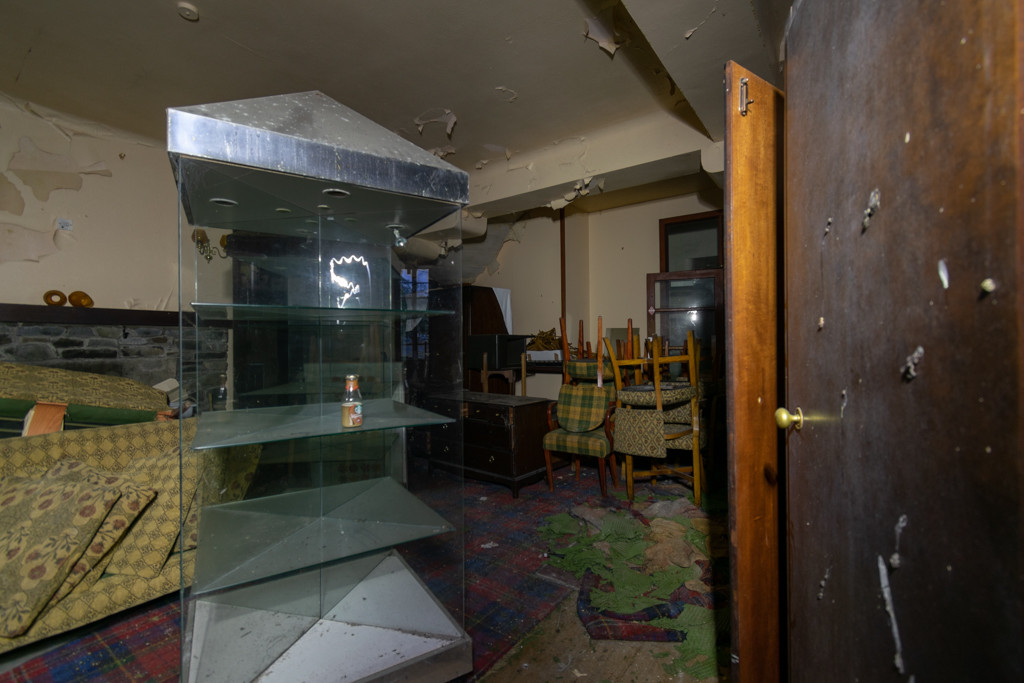 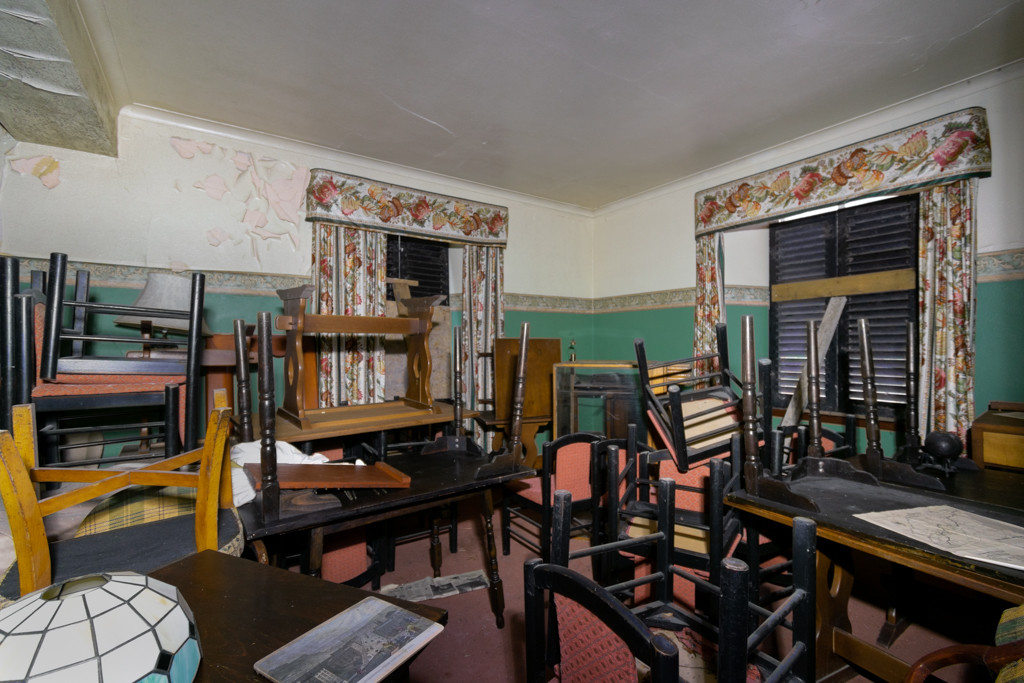 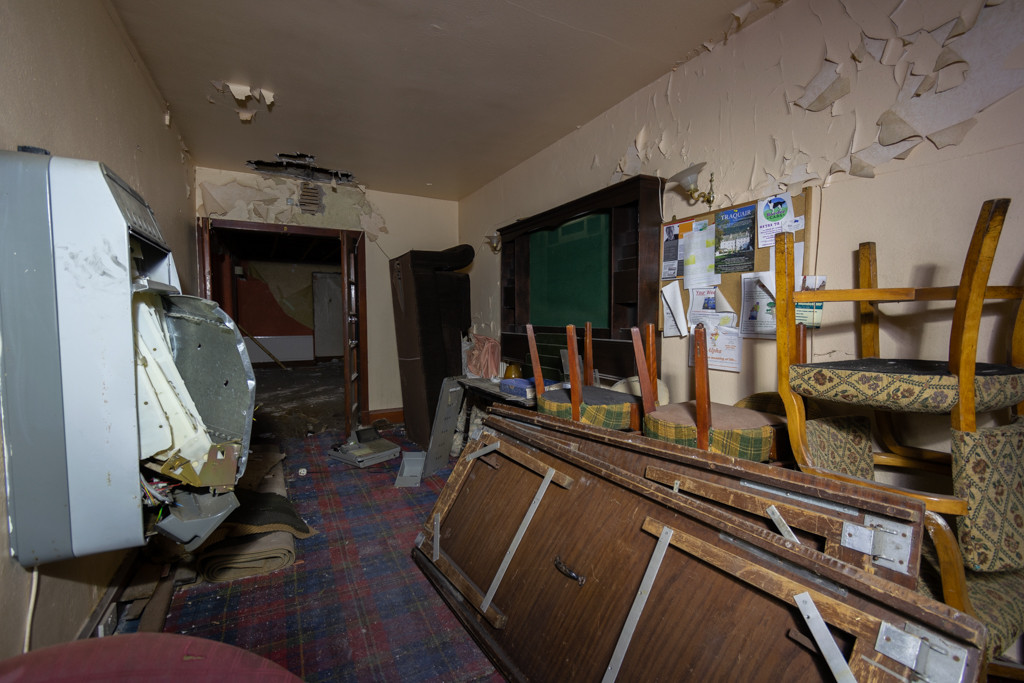 An old bar on the lower level seemed to retain even older features such as the stonework round the fireplace. 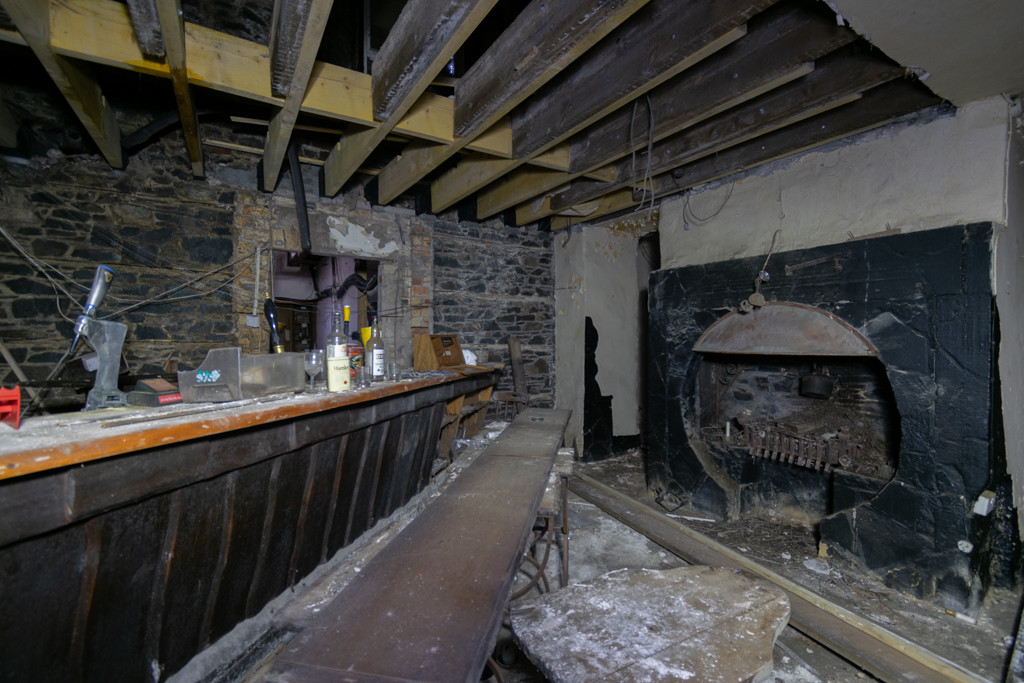 This older photo shows the woodwork on the bar matching the woodwork there today. Sadly there is no date to go with this photo. 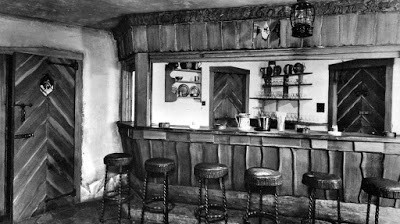 Bottles and glasses were left a little bit too neatly on the bar. 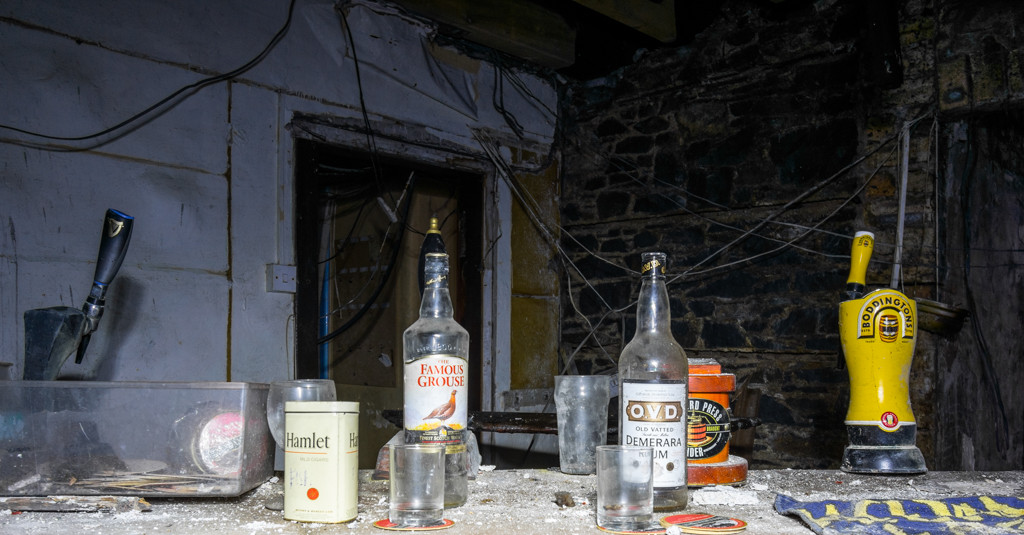 These weren't the only intact bottles and glasses we found. Towards the back of the property sat an almost full storage cupboard with wine and other alcoholic beverages. 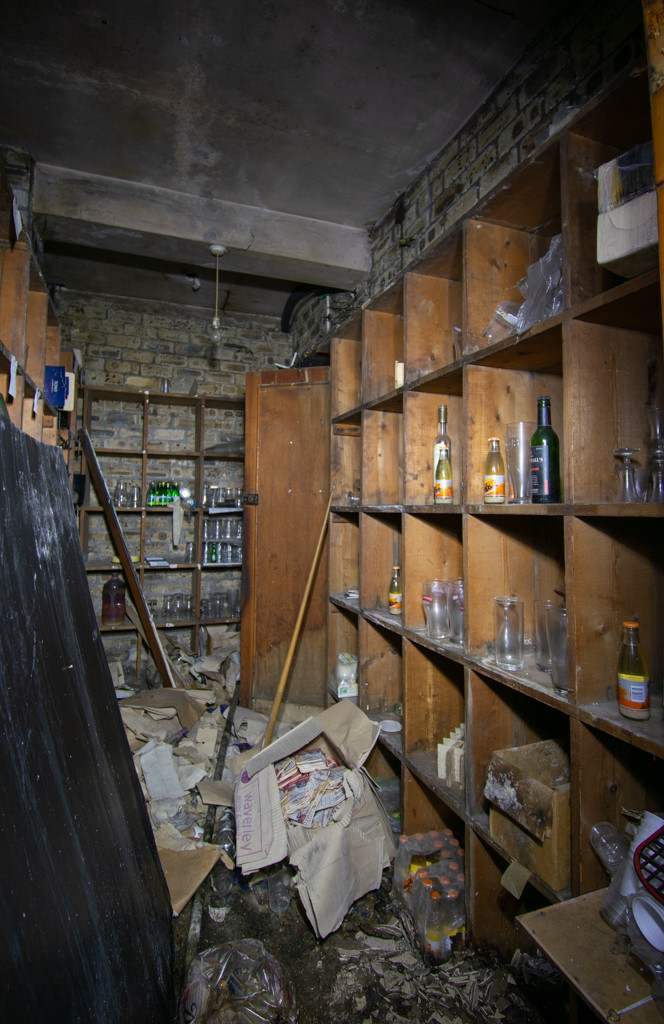 The kitchen had a fair amount of decay due to the skylight in there. 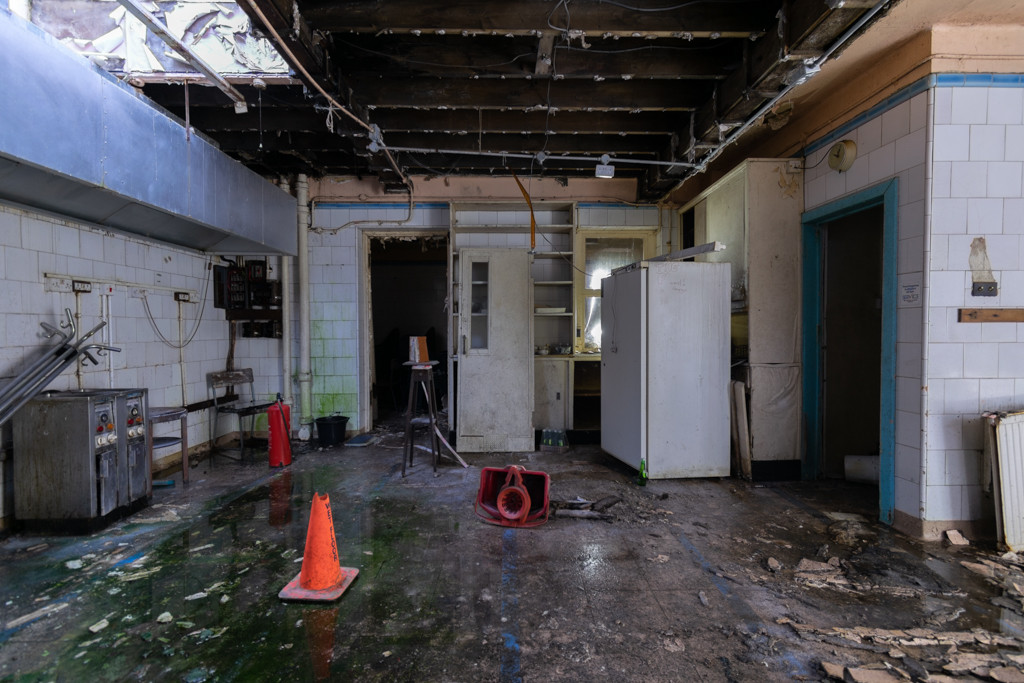 Plates and cups in the kitchen and in smaller storage rooms were left as they were when the inn closed. 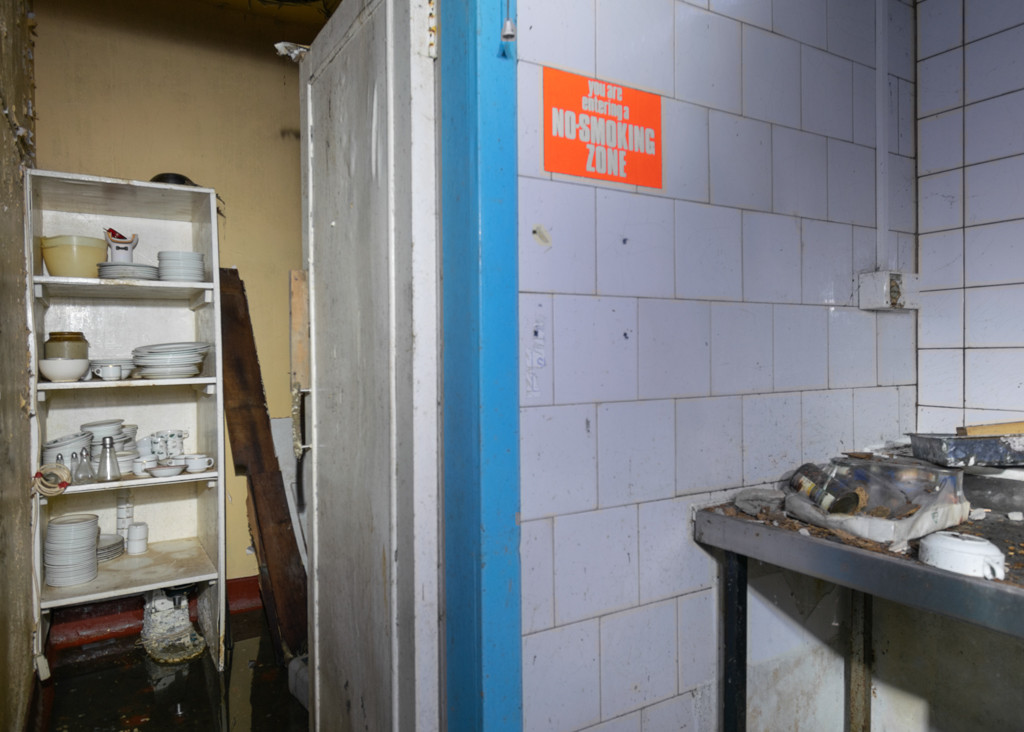 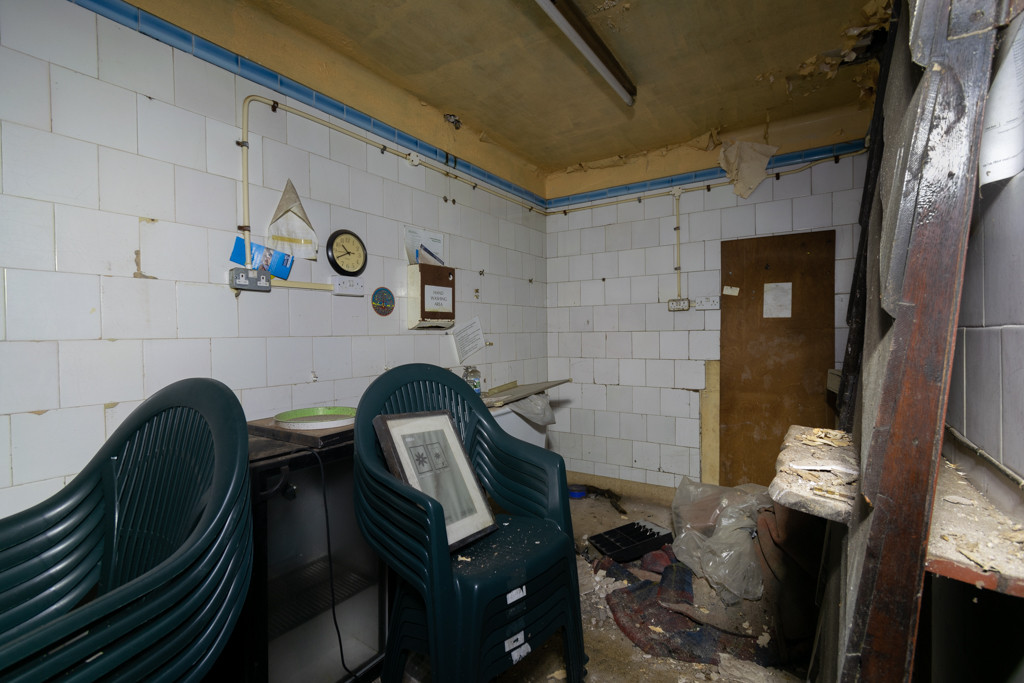 @UrbandonedTeam made a great discovery next door to the kitchen. A room fully decayed with natural light housing an old TV on-top of a sorry looking air hockey table. 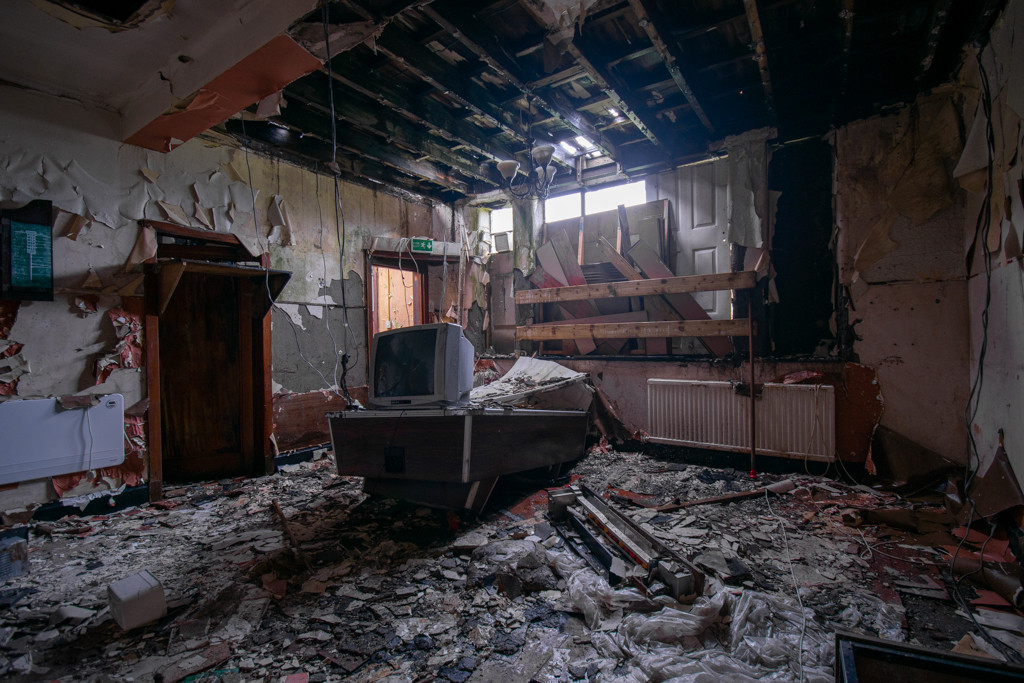 Next to them were a set of old pub games machines. 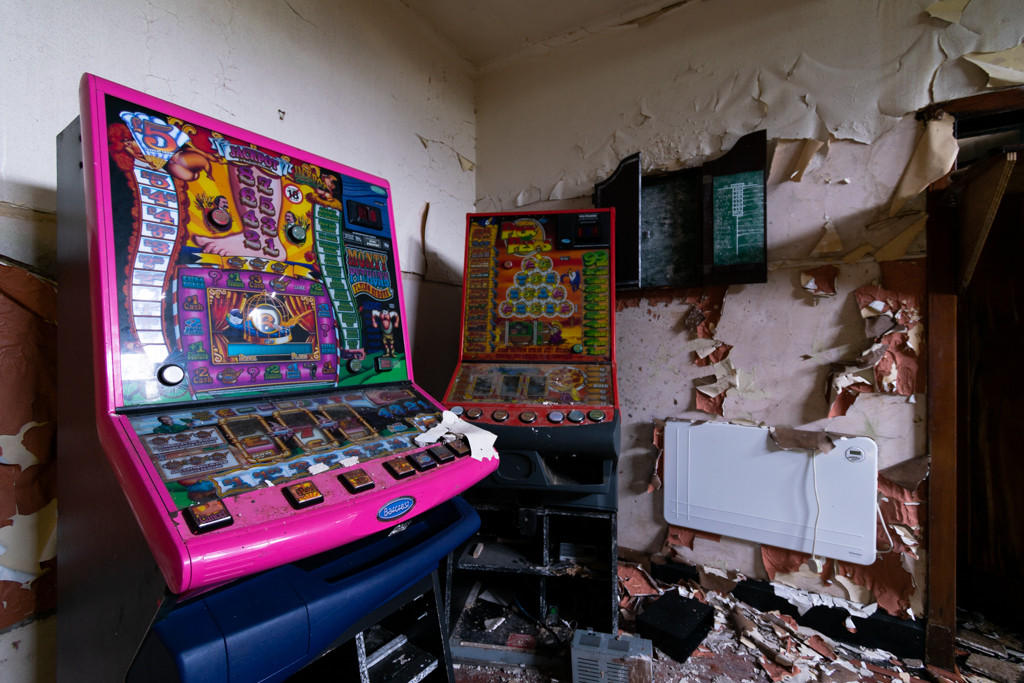 Next we headed upstairs to see what else was on offer. 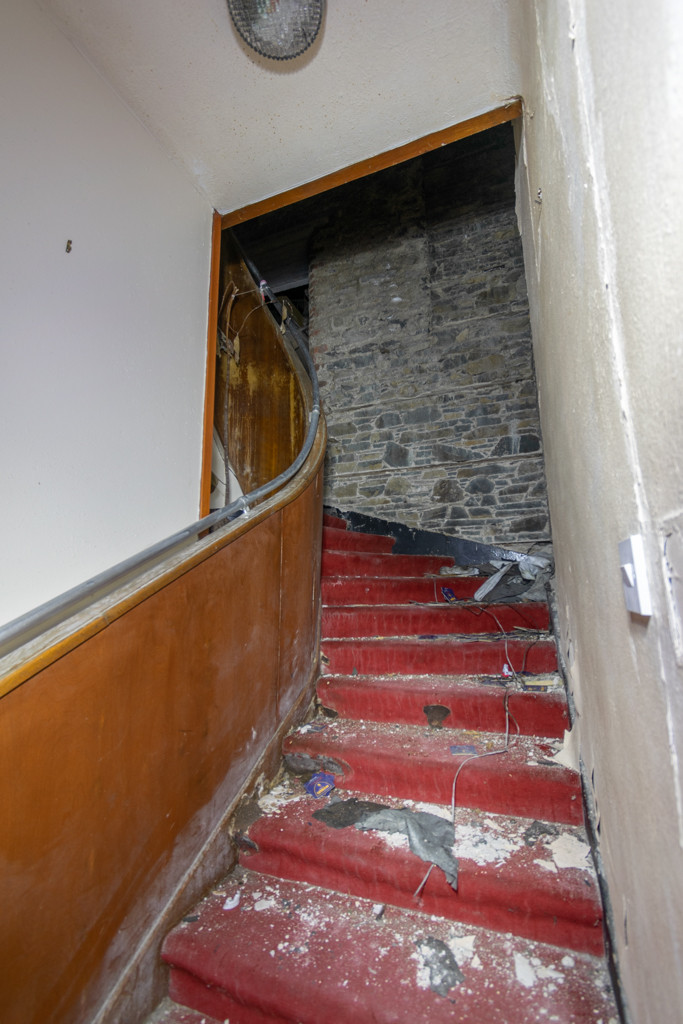 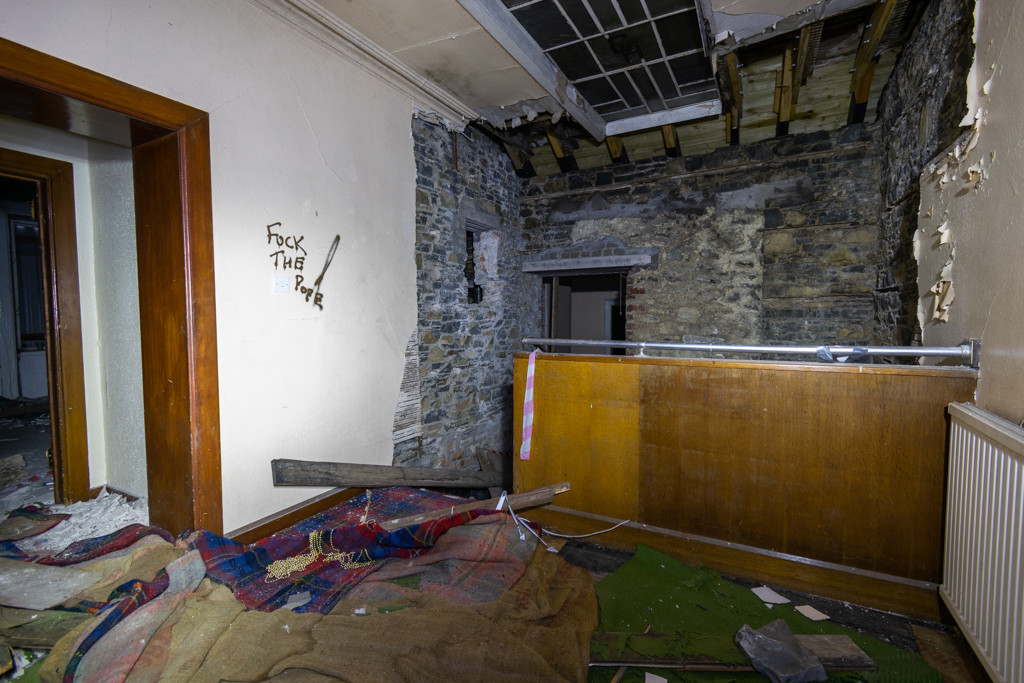 The "CH" logo found on the gate outside could be found in the glass-work above the landing. 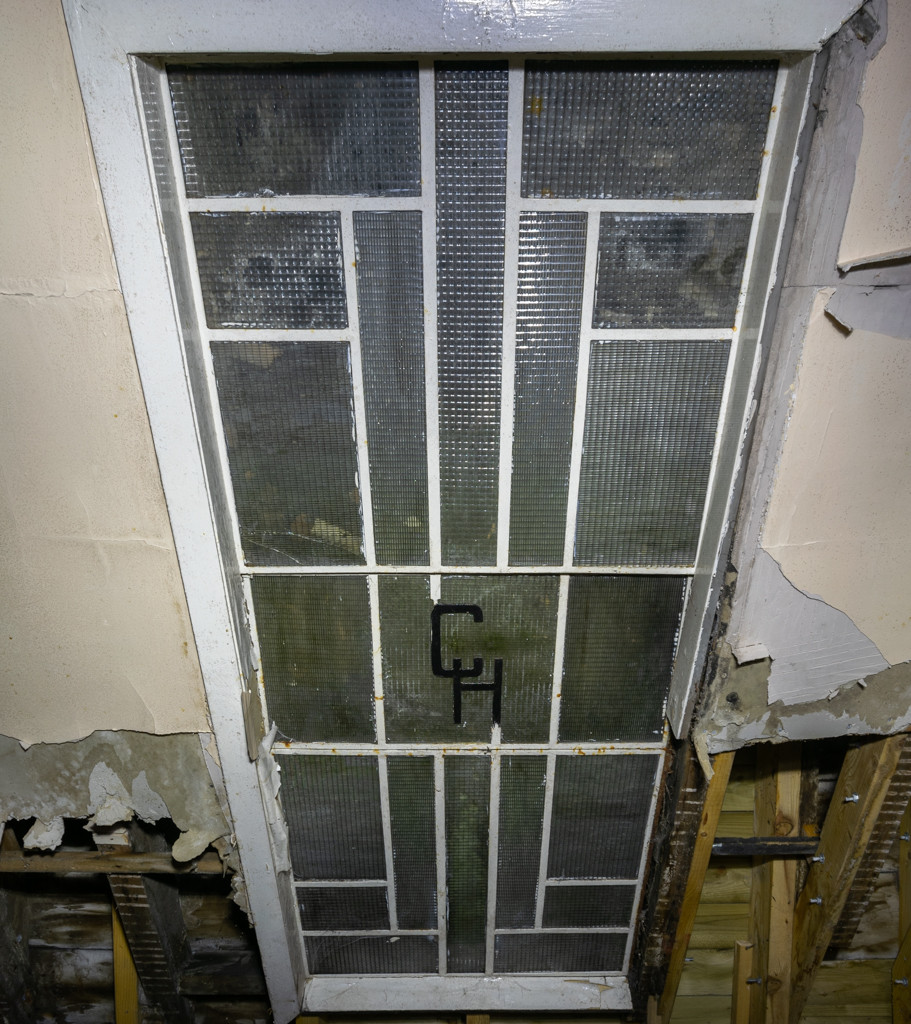 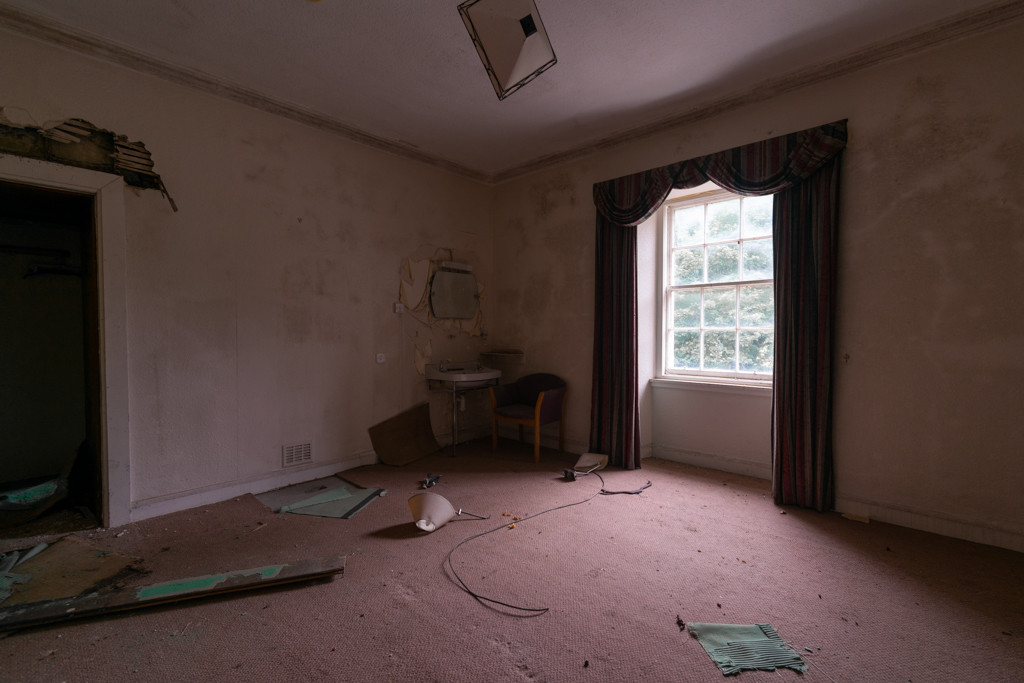 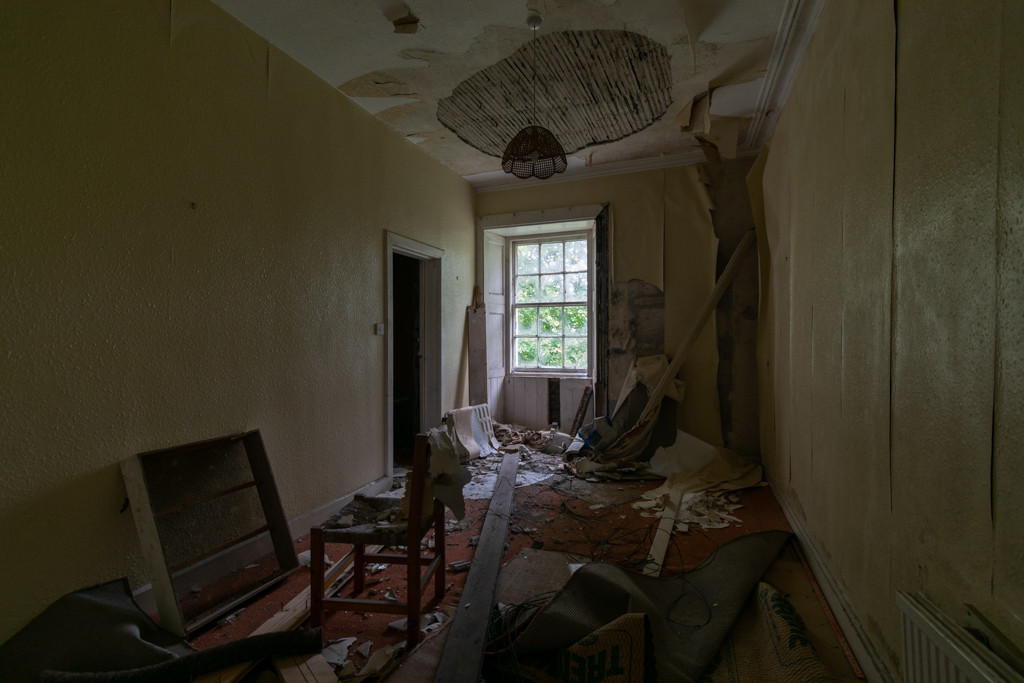 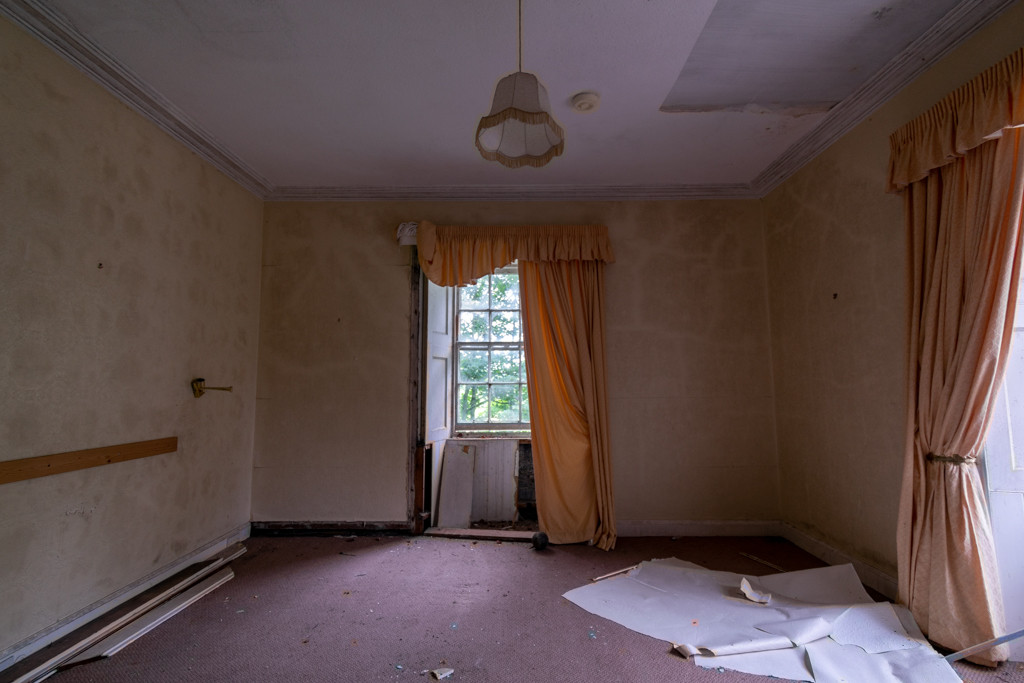 This was the only bed we could find, not the grand 4 poster bed we had been hoping for... 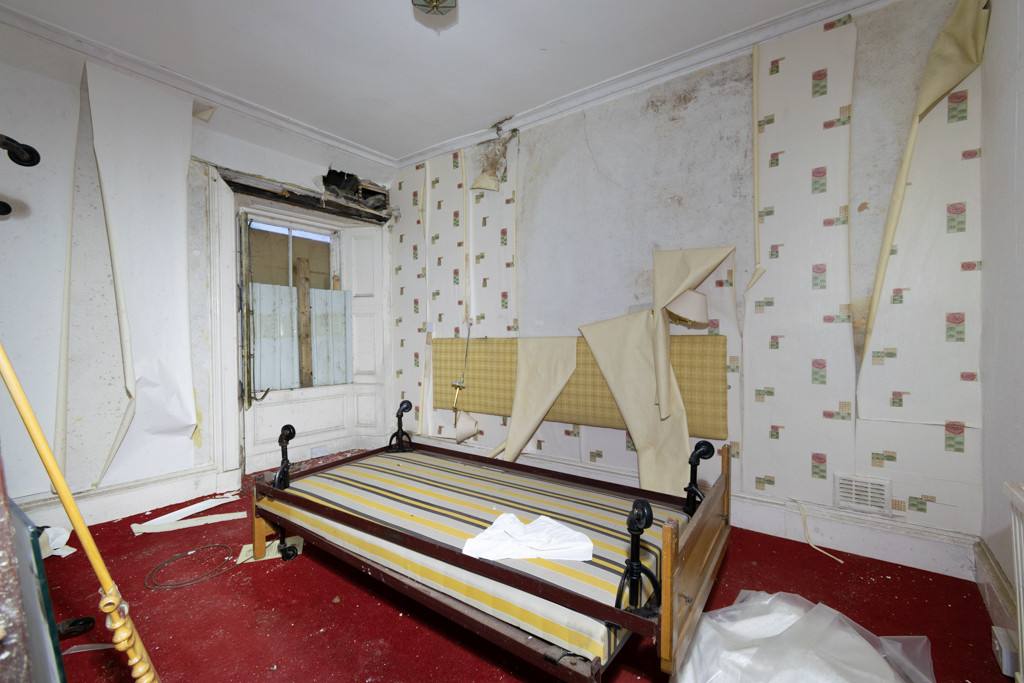 I saved the best till last (in my opinion), three different bathrooms from both levels of the inn. I think I missed one sadly but ay' well. 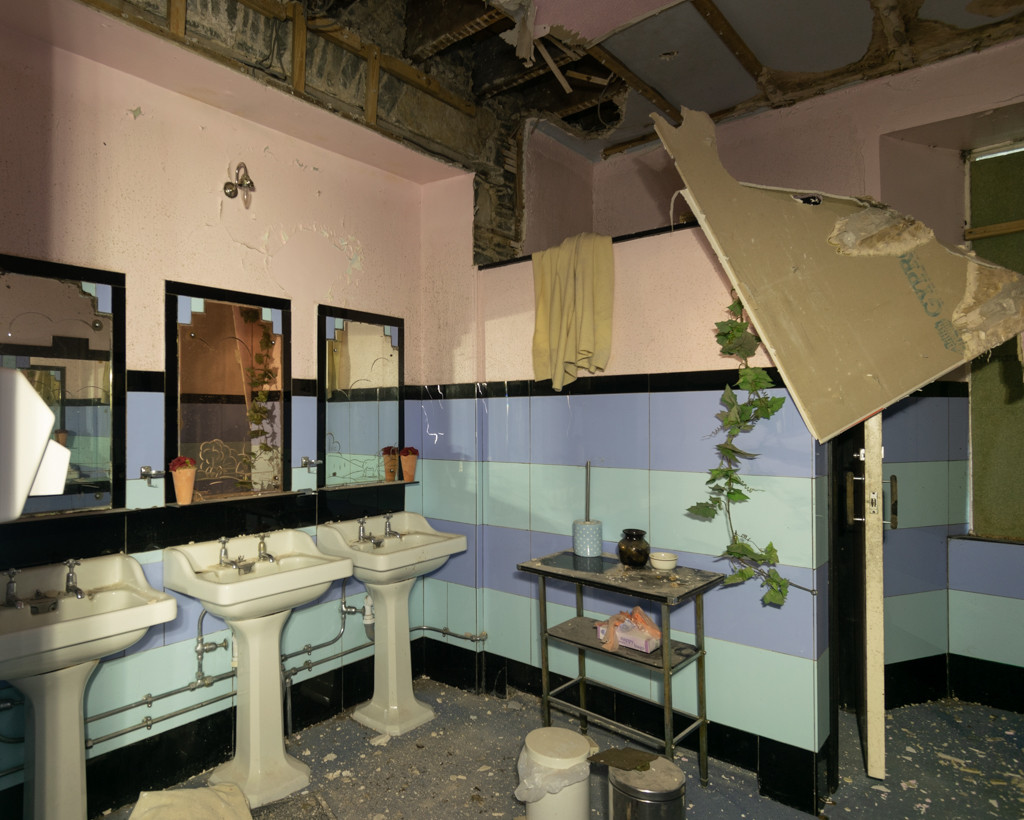 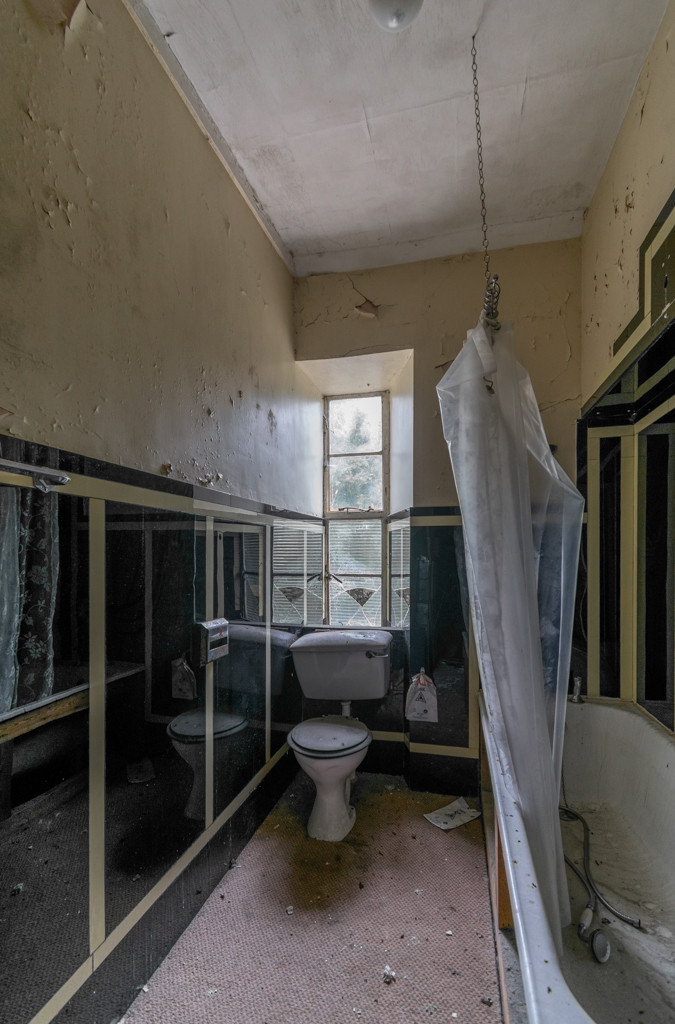 Nowadays the site sits deteriorating more and more. The current owner planned to convert it to housing but due to local controversy, the council rejected the plans.
"In January 2013, after a lengthy campaign by the Tweedsmuir community to secure ownership of the Crook Inn, the Tweedsmuir Community Company raised the asking price of £160,000 and bought the property. The Community Company obtained a Development Grant from Big Lottery in 2014 to redesign and renovate the historic Crook Inn, with designs undertaken by WTArchitecture, Edinburgh. The plans obtained planning permission in 2015. The rest of the land at the site was purchased in 2015 with grants from the Scottish Land Fund, SSE Clyde Border and the Infinis Glenkerie Community Funds. Grants are being sought to create a multi-faceted Crook Inn Community Hub to serve the Upper Tweed community and tourism."

If you wish to see the plans and know more, visit: https://tweedsmuircommunitycompany.org.uk/index.php/meeting-community-needs/our-vision-the-crook-inn-community-hub

Regular User
Nice one mate - although possibly my favourite feature of this place was the stunning views around it, some features inside were unexpected and dated.

UrbandonedTeam said:
Nice one mate - although possibly my favourite feature of this place was the stunning views around it, some features inside were unexpected and dated.
Click to expand...

I see why, without the view it wouldn't have felt the same that's for sure!
Last edited: Aug 7, 2020
Flickr​
W

28DL Full Member
Nice one man! Like the old style inside, shame it's not as complete and laid out as it would have been when it was active, but great photos nonetheless!
Anduentes fortuna iuvat

Regular User
That's about as good as pubs come, nicely done
Stop The Planet, I Want To Get Off!

Regular User
Vitrolite heaven!! That must have been a flashy place in the 1930's!

28DL Full Member
Love the photos, what a place too run a pub