Regular User
And so, the Speedio disused theatres train rumbles into its next station...

Welcome to the Stockton Globe! To a theatre lover this one needs no introduction. Its one of the most well known 'at risk' cinemas in the country and of course its been high on my wanted list since the start. I came very close last year but was foiled at the last hurdle. This time i wasn't leaving until i was inside and thankfully the shear determination paid off!

Inside we were at first very weary, new hoarding had appeared since my last try advertising the 'grand reopening' or something along those lines. Not really knowing the exact situation I had a suspicion we might have been too late. Once inside however we realised any kind of re-opening is along time away! Its far from fit to host anything right now. The auditorium is indeed stunning but something needs to be done about the damp before much can happen. The basement, often the last bastion of epic in some cinemas was unfortunately flooded to neck height and the projection rooms so caked in pigeon shit i only mustered the courage to have a quick peak and verify they are for the most part 'empty'. That just left the fly tower and lofts. These were good, especially the spot light room, a quite frankly scary little den hung just in front the of the stage but i stupidly left the camera behind and didn't get any shots..

Cinema Treasures, as ever, can provide a pretty comprehensive history


cinematreasures said:
The Globe Theatre opened on 16th December 1935, and is the third Globe cinema building on the site.

The first was a pre-war cinema of approx. 500 seats which was demolished in 1925 and replaced by the second Globe Picture House with 1,200 seats which in turn closed on 20th April 1935, and was completely demolished to make way for the existing Globe Theatre building which opened an amazing 8 months later.

This was a variety theatre and had no film programming until 1937 when it was bought by Associated British Cinema(ABC) - however a projection suite was part of the original design. ABC continued to present live shows on regular occasions amidst the film fare.

A very short-lived attempt was then made to restore it as a theatre before bingo took over from 1978 to c.1996.

It has remained unused since then.

The Globe Theatre was designed by Percy L. Browne & Son of Newcastle Upon Tyne for brothers Charles and Alfred Lewis and was constructed by local firm Arthur McLeod Ltd of Thornton on Tees. Fibrous plasterwork was by Messrs Webster Davidson & Co Ltd of Sunderland. The building cost a reported 75,000 pounds.

The imposing facade has four sets of double doors in the wide frontage with 10 large metal framed windows (by Messrs F Braby & Co of Glasgow) on 1st and 2nd floor levels - five on each floor, grouped 1-3-1.

In-between the groupings are two squat towers with ornamental iron grills running up both levels. There is a further window at the top of each tower and between the towers is a 3rd floor housing the projection suite which windowless expanse once contained the simple lettering GLOBE.

The frontage is almost symmetrical - the left side has an extra small bay containing two small windows. There are three circular plaques between the 3 central windows the central one of which depicted comedy and tragedy. The whole is enlivened with fluted plaster typical of the period. A square canopy ran over the street from tower to tower.

Two shop units are incorporated, one on either side - at some point shortly before 1996 these wese bricked in and the lower frontage tiled, the facade was also repainted at this point.

Apart from the removal of the lettering, the replacement of the canopy, the tiling and the addition of some railings on the roof the facade is unaltered and appears to be in good condition.

The doors give access to a small vestibule and four further pairs of doors - some with etched glass - lead into the main foyer and box office. This is actually, as at the Manchester Opera House, located in the circle void but is surprising large.

It is totally as built not having been spoiled by false ceilings. Good plasterwork of square ceiling recesses edged with fluted plaster but replacement of original lights by unattractive 'Mecca' fittings.

At one side is an office. Pleasing amount of natural light gives the area a rather more spacious feel than is actually warranted. Concrete stairs down in each outer corner lead to a small stalls foyer, doors give direct access to the lower circle and stairs up (above the stalls stair) lead to the rear circle foyer which is lit by the three central 2nd floor windows and is now converted into a bar.

The shop space is not incorporated into the theatre.

The auditorium is on two levels and seated, depending on the source 2,574, 2,429, 2,400 or 2,372. A huge stalls floor retains its original saucer rake and now has bingo tables instead of rows of seats. The circle is also vast with 19 rows of tip up chairs.

However the sightlines from both areas are outstandingly good as the circle is somewhat higher than average meaning that the entire proscenium is visible from the stalls back row.

The circle front is almost plain with a geometric cube design along the lower portion and is curved but not returned to the proscenium wall.

The expanse of wall is instead filled by an rectangular recess containing a fountain of light. Above this are two large bas relief panels depicting sight and sound - the right hand side one has been badly damaged by what looks like the insertion of a loudspeaker.

The proscenium is rectangular and has plaster strapwork together with concealed lighting still containing coloured bulbs at the upper levels, these were like the light fountains and the two deep rectangular ceiling recesses connected to a holophane lighting board which gently varied the colours when the house was lit.

The whole of the anti-proscenium is richly decorated with angular plasterwork and has the general feeling of say the Stockport Plaza (Grade II Listed). The ceiling over the front stalls is divided into sections and contains a large rectangular recess with concealed lighting.

A similar recess exists above the circle also with hidden lighting and containing the projection ports for film presentations. The plasterwork is again of an outstanding quality and is again, panel excepted, intact.

Indeed given that the building has been unused since 1996, it is in a very good state. Damp and with obvious signs of water penetration but no falls of or bulging plaster. The original colour scheme (painted by Messrs Fred A Foster (Nottingham) Ltd of Mapperley) had a deep jade carpet with lighter seating and shades of green, fawn and gold on the walls and ceiling.

It currently sports a subdued 'Mecca Bingo' colour scheme - not as garish as some of their halls but similar style of colours and lights.

The stage is large, raked though not steeply and has adequate, but not generous, wing space. The get-in doors have been bricked up but were awkwardly 3 metres above stage level as the stalls are so extensively sunk below ground level.

The only false ceiling in the place is above the stage making examination of the grid impossible. It is likely that the safety curtain and machinery are intact above this as it would make no sense to strip them when so little else has been altered.

An orchestra pit has been covered over and replaced by bingo paraphernalia but otherwise the stage is unaltered with no access to the bingo players as has happened at so many other halls.

Descriptions of the building have often mentioned the peirrot and pierrette theme which looking at contemporary reports seem to have consisted of four large decorative mirrors edged in a deep green glass depicting pierrot, pierrette, columbine and harlequin. These were designed by Stanley M. Scott and manufactured and fitted by Reed Millican & Co of Newcastle upon Tyne. There is now no trace of these - if they were situated in the auditorium, as is likely, they must have proved very distracting for films and could well therefore have been removed at an early stage.

This is an excellent example of its type which has been so very little altered as to be considered intact. The condition is good, a return to live use would not be prohibitive and with a good catchment population with no other large theatre nearer than a hour away (Sunderland Empire) should meet with success. It is unusual to see such a good example of a saucer raked floor.

In March 2010, it was announced that the Globe Theatre would be renovated for live theatre use, work began in early-2011, for a planned 2012 re-opening.
Click to expand... 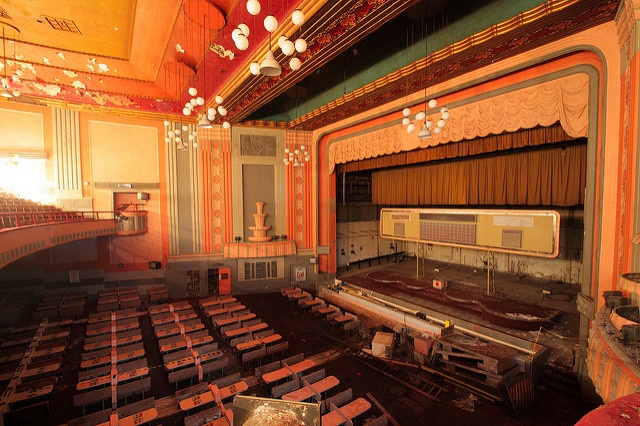 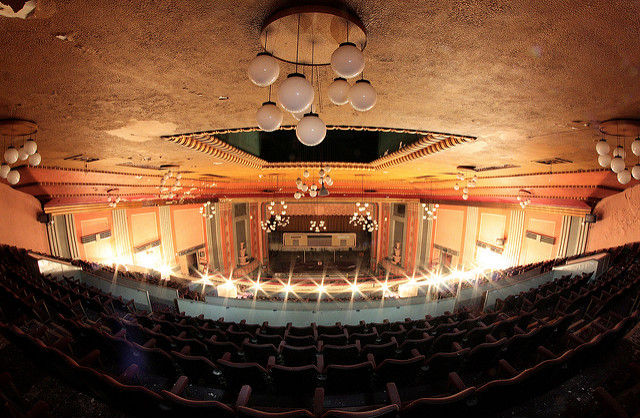 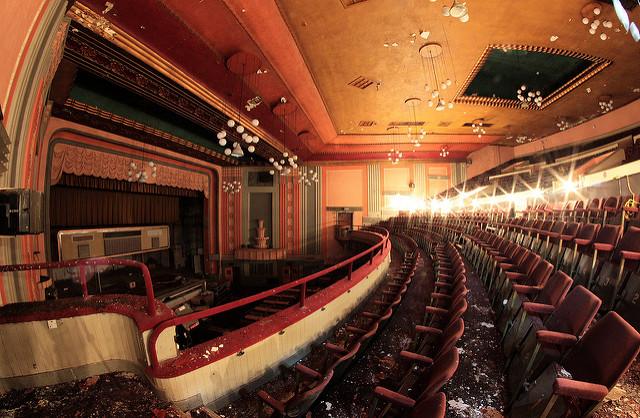 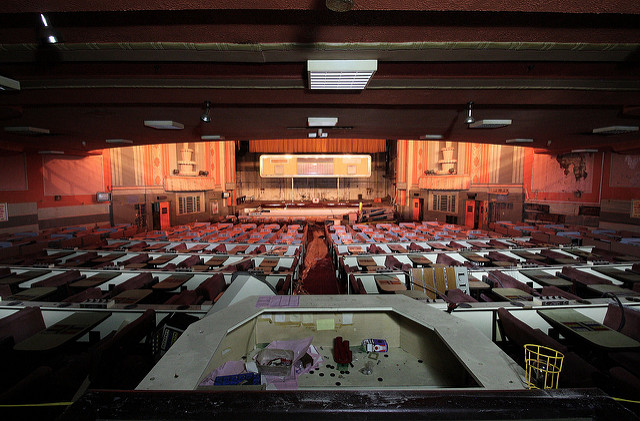 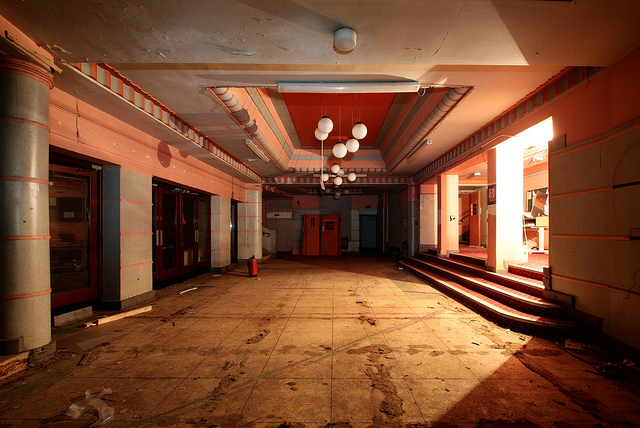 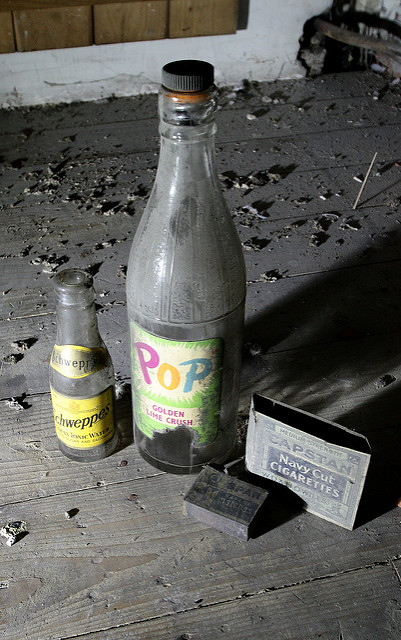 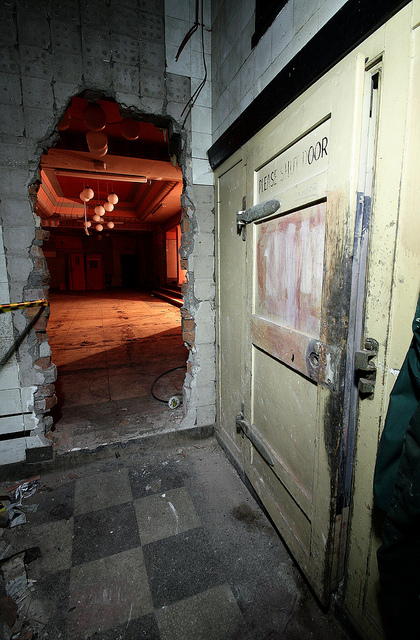 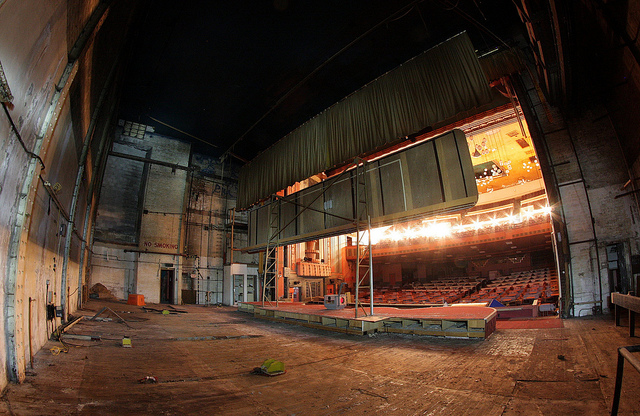 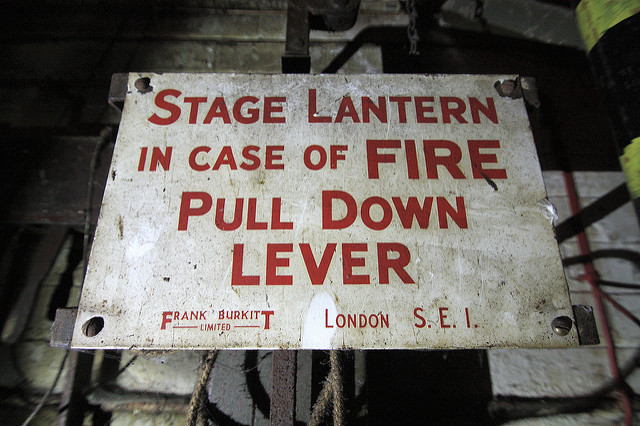 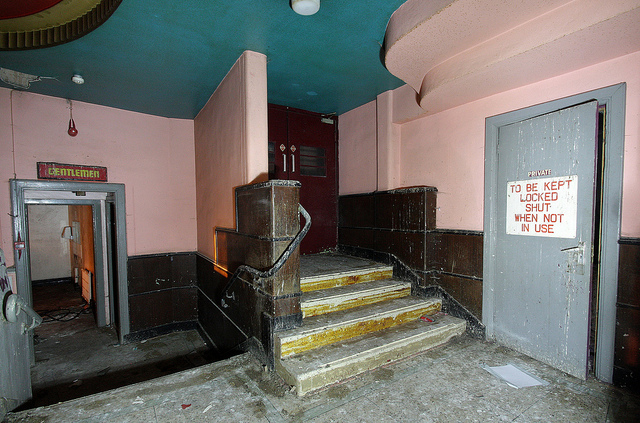 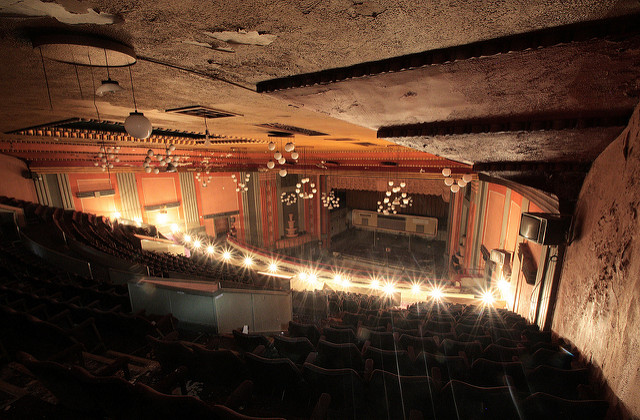