28DL Full Member
You've seen the other (much better) pics on here, so I'll spare you the history lesson.
I've done a ton of research on this place for a book I'm working on, but I can't go giving away all my hard-earned research on the intertubes

Designed in 1941 as a deep shelter to protect the vital dock workers from Nazi bombs. 1.2 miles of tunnels bored under the rocky outcrop of Holt Hill. Designed to house 6000 people in a mixture of bunk beds and seats. Had two canteens and a library - pretty damned snazzy as shelters go.

Took 150 men two years to build - and by the time they'd finished, the blitz was over and the bombing threat had receded. The shelter was lightly used while it was still under construction, with access only available to residents issued with a ticket. After the war it was used to store empty egg crates, an unglamorous fate for such a monumental project. The local council took an active interest up into the 1950s, with work being done to prevent dry rot after residents living near a shaft complained about the smell!

This has been sealed for decades, so there's very little grafitti (most of it centred around Entrance No1, which was accessible until the 80s). There's all sorts of electrical switching gear, toilets, urinals, washbasins etc still in situ and in excellent condition. There's also a fuckton of asbestos panels stored in there - I suspect even the flooring is made of the nasty stuff.

​
Copyright means I can't post the original plans, so I've made my own map which I reckon is the most accurate you'll find anywhere. Feel free to share, just don't edit out the copyright or I'll gouge out your eyes with a rusty spoon. 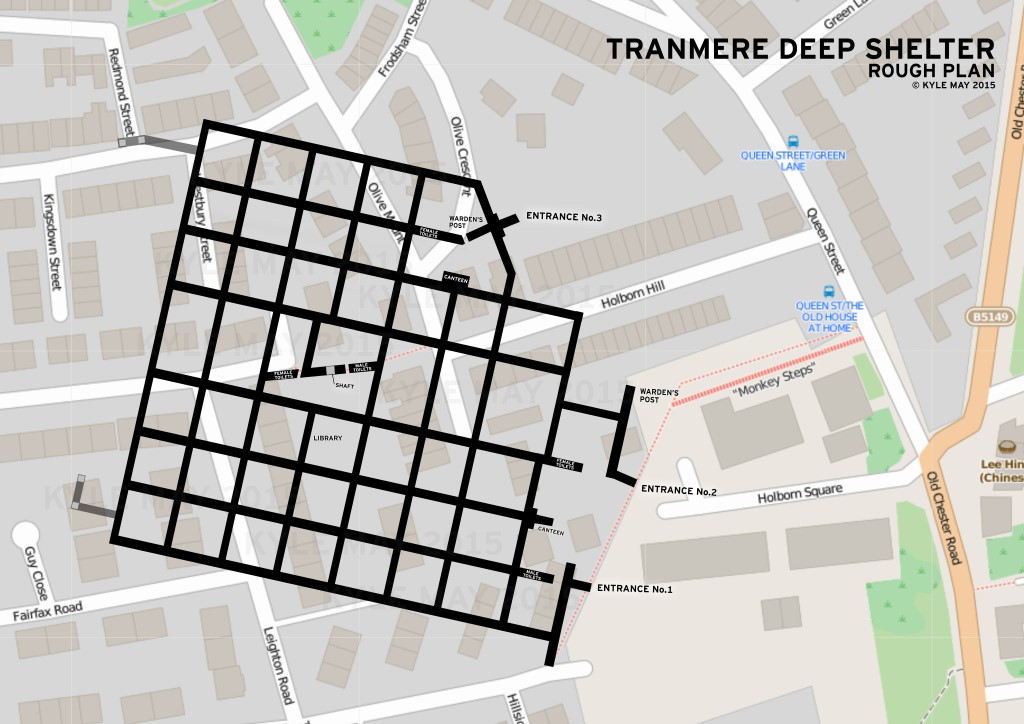 My pics aren't too great - was a rush job and all I had on me was a manual 50mm prime and a the mediocre Pentax kit lens. Went back fully equipped a few days later and the council had sealed up the only point of access, so I missed out on some of the best bits. Still an interesting explore!

Came out of the entrance hallway to find a lovely old enamel breadbin.
Seems unlikely that dates back to the war. I'm no breadbin expert though. A breadbin enthusiast, at best.

I think somebody had moved this to entrance deliberately - either as a beacon to find their way out or so they could come back and steal it.

The first section is unlined so you can see the raw bedrock. Jamie Oliver would describe it as 'rustic'.

A bit further along there's some nice brick wall, and a corrugated metal roof.

The roof was partly aesthetic, partly to protect shelterers from any bits of falling rock, and partly because OMG LOOK AT ALL THE PRETTY COLOURS

Women's toilets! Even in the middle of a bombing raid I bet the ladies still went in together so they could have a natter, or whatever it is women do in there.

Would've loved to go inside, but that would be terribly indecent!

Sounds like a jolly nice place to sit and eat my Foxs Crunch Creams, let's go...

...or perhaps not. Unless you like the taste of asbestos.
This canteen was near Entrance No 1, and the area around has been graff'd and damaged much worse than the rest of the place.

Wasn't really expecting any changes in height. When you're 60ft underground anyway, what's the bloody point?

Photos really don't do justice to the scale of this place. This corridor looked a LOT longer in the dark...

These was a letter painted at every junction in the shelter.
My exclusive historical research revealed that these were for playing Giant Underground Scrabble to take their mind off the bombs.

Lots of fuseboxes and electric switches dotted about the place.
My research suggests that these were for shelterers to charge their iPhones.

An old lamp of some variety. Looks similar to the ones on trains but not quite the same, anyone know much about these?

Here's a view looking roughly west from the south-east corner of the shelter.
It looks as though the walls were originally whitewashed...though the place has enough salt deposits to keep Walkers in business for a decade, so it could've been that.

Finally, we found the gents!

There are something like 120 toilets in the shelter.
The council suggested reusing them in new houses being built after the war, but it looks like that never happened.

Yes, I did take a photo of the inside of the bowl. No, you don't want to see it.

The toilets have vent things in the roof.
My painstaking research has revealed that these were part of a bitchin' shelter-wide sound system. The DJ decks were located in the Warden's Post, and operated entirely by volunteers.

It was probably the most relaxed, calm place I've ever explored - it felt totally safe.
The fresh rockfalls around the place suggested otherwise.

The place is a goldmine if you're into rusty old cans. Which is probably a euphemism for something horrible.

The way the brick and sandstone almost flows together is pretty impressive. The guys who built this knew what they were doing.

These handy signs stop you getting lost in the dark.
Except there are actually three entrances, and two of them are completely sealed. Hope you brought sandwiches.

Well, that was totally worth the asbestos exposure. Shame we didn't find any secret Nazi gold. Pub?​


Cheers for reading!
Last edited by a moderator: Jul 15, 2017
History geek, musician, photographer. Digger and guide at the Williamson Tunnels.
I also create film presets if you're into that type of thing.

Although not as well lit as mine, but don"t hold your breathe waiting for them lol

Joking aside it actually looks very different with less lighting, i like it

Just need the other shafts adding to the map mate

28DL Full Member
To be honest I've got a bit of a thing for lighting shots the way it looks when you're down there, in the pitch black with a torch. Some of those shots had decent, even lighting and I ended up using a bunch of radial and gradient filters etc to fuck em up when I was developing the raw

Weird eh? I could come up with a bunch of art-school wankbollocks about how lighting a shot this way pulls you into the scene and makes you feel a personal connection instead of simply documenting the location. But really, I just think it looks cool

Cheers, I totally forgot to do the shafts! There's a little bit up top that I need to add as well.
History geek, musician, photographer. Digger and guide at the Williamson Tunnels.
I also create film presets if you're into that type of thing.

28DL Full Member
Fascinating mate!
The revery alone will do, if bees are few.

28DL Full Member
UPDATE: We heard through the grapevine that somebody had breached the council's crappy attempt to seal the place up, so we headed back, this time much better equipped.

We were still unpacking the camera gear when we heard scraping from the entrance, so i wandered back down the entrance passage to greet our new guests. Turned out to be a pair of builders sealing up the hole, and they weren't too thrilled to see us appear on the other side. Shouting 'I'm a cop you idiot!' in my best Arnie voice probably didn't help.
We sheepishly scrambled out through the hole and made a tactical withdrawal to Bidston Hill, where we went for a nice wander in the sunshine. The shelter there is buried behind acres of concrete, the final salvo of a long war of attrition between local explorers and the council.

We told the builders we thought we'd heard other voices while we were inside, but they didn't give a crap - they just wanted to get the job done and get home. Since it looks like they sealed it up exactly the same way again, I don't see it lasting all too long.

Here's a brief, crappy cameraphone video which is all I had time for! At the end you can hear my mate saying he heard people coming in...this was actually the builders starting work.


Some bits seemed a little worse since our visit a fortnight earlier, with more graffiti near the entrance especially, and the section of fallen roof near the women's toilets looked worse than I remember. Probably best it's closed now.
Last edited: Mar 10, 2015
History geek, musician, photographer. Digger and guide at the Williamson Tunnels.
I also create film presets if you're into that type of thing.

28DL Full Member
excellent mate
your history is mine​

28DL Full Member
Great report, found it very interesting and love your sense of humour.
The lamp in one of your photographs was the standard road works lamp used during the 50s and 60s, it contained a small tin of parrafin in the base with a wick which when lit lasted for about twelve hours. It had red lens on three sides and as kids we nicked the lamps to light our dens, my dad had a couple in his greenhouse to keep the plants warm in early spring as they gave out quite a bit of heat with the wick turned up and the lens removed.

28DL Full Member
You wanna report those Fuckers mate. Good job you were near the entry point

28DL Full Member
Anyone have any new reports as to wether its still possible to get into here, me and a friend went looking today with our camera gear, but we didn't really know where to look or what to look for, so instead we went up to the observatory.

Anyway the reason you will see no recent posts from here is quite simple........it"s sealed up well & truely (this time for obvious reasons ) until the next time someone with 14LB Sledgehammers, burning gear or a 360 decide otherwise ( we do not condone such things on 28DL )

Or it was last time i called

The Crew of the Nautilus

Bertiebassett said:
Great report, found it very interesting and love your sense of humour.
The lamp in one of your photographs was the standard road works lamp used during the 50s and 60s, it contained a small tin of parrafin in the base with a wick which when lit lasted for about twelve hours. It had red lens on three sides and as kids we nicked the lamps to light our dens, my dad had a couple in his greenhouse to keep the plants warm in early spring as they gave out quite a bit of heat with the wick turned up and the lens removed.
Click to expand...

Yeah it is an old roadwork's lamp, as a kid we had an outside toilet and every winter my Dad used to "borrow" one to hang up inside the bog, the warmth it gave off kept the lead pipes from freezing, and if you took the red lens out it gave off enough light for Dad to read the paper while having a crap.
Ahhh, the mixed aroma of burnt paraffin and faeces........... Stirs the memories !
I used to sit on the bog and play "hand puppets" on the wall