Regular User
History. Taken from CureFor Pain’s report (link below). “Built originally as cold storage next to Canada Dock goods station, in 1928 it became J A Irving & Co warehousing, and in 1965 was taken over by United Mersey Supply Co, a ships' stores supplying most of Liverpool's vessels with everything from sump plugs to malt whisky. They moved premises in the early 1990s and it's been empty since.”

I haven’t checked this but it fits with old OS maps where the building is shown as a cold store, built between 1893 and 1902. A directly attached building was also a cold store, shown as a ruin by 1951 - the remains of this were only finally tidied up about a year ago when the Cemex plant next door was built.

Previous reports. As listed below. The reason there are so many reports on this place is probably because until recently it was (literally) a walk-in, so any old photographer or graffiti child could get in.
In reality the old warehouse is a filthy hole with nothing much to see, although it’s admittedly quite photogenic - something to do with the lack of windows.

Motivation. This was one of my first outings in Liverpool with junior, about 2 years ago, mainly as something to do during school holidays. We clambered around, took a few photos, and went off to look for something better.

The recent revisit was prompted by the possibility that there might be an old hydraulic lift or jigger mechanism still left in the attic since there are four haulage bays above which a jigger might live.

Three bays are shown on the external below, and there’s another one round the back (for a discussion of jiggers see https://www.28dayslater.co.uk/threads/hunting-jiggers-stanley-dock-tobacco-warehouses-revisited-liverpool-aug-dec-2018.115834/). 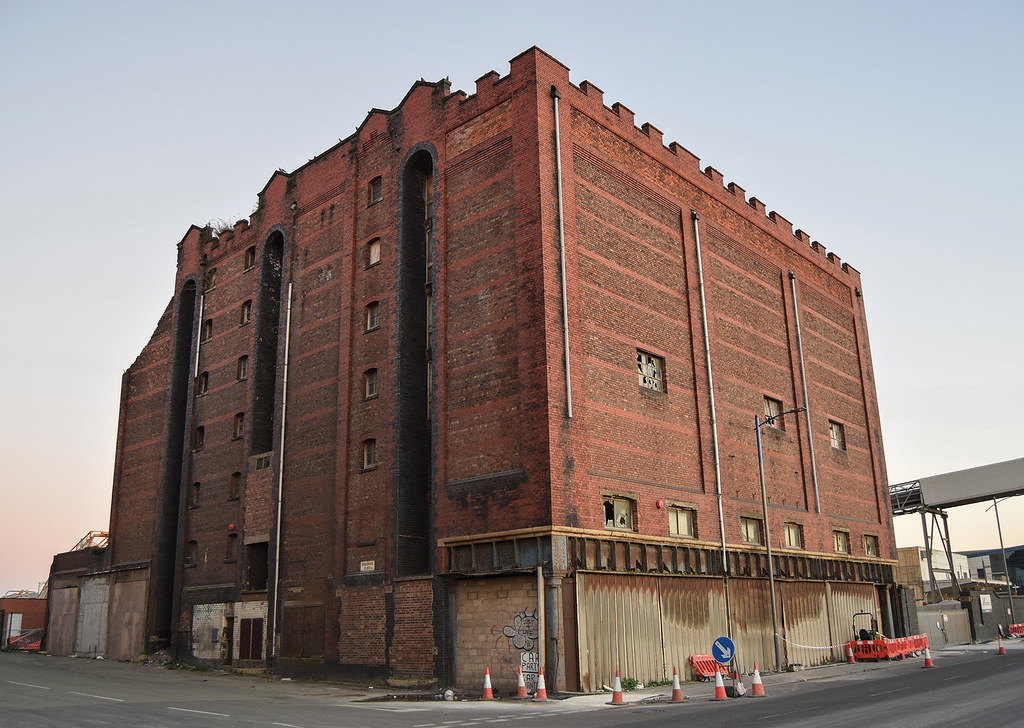 Now I didn’t remember there being anything particularly interesting in the attic, other than a partially collapsed roof, and none of the previous reports show any jiggers. Nevertheless the warehouse was on the hydraulic main, as shown on the map below (ca 1914, the yellow dot is the building), so there did seem to be an outside chance that there was one up there somewhere. 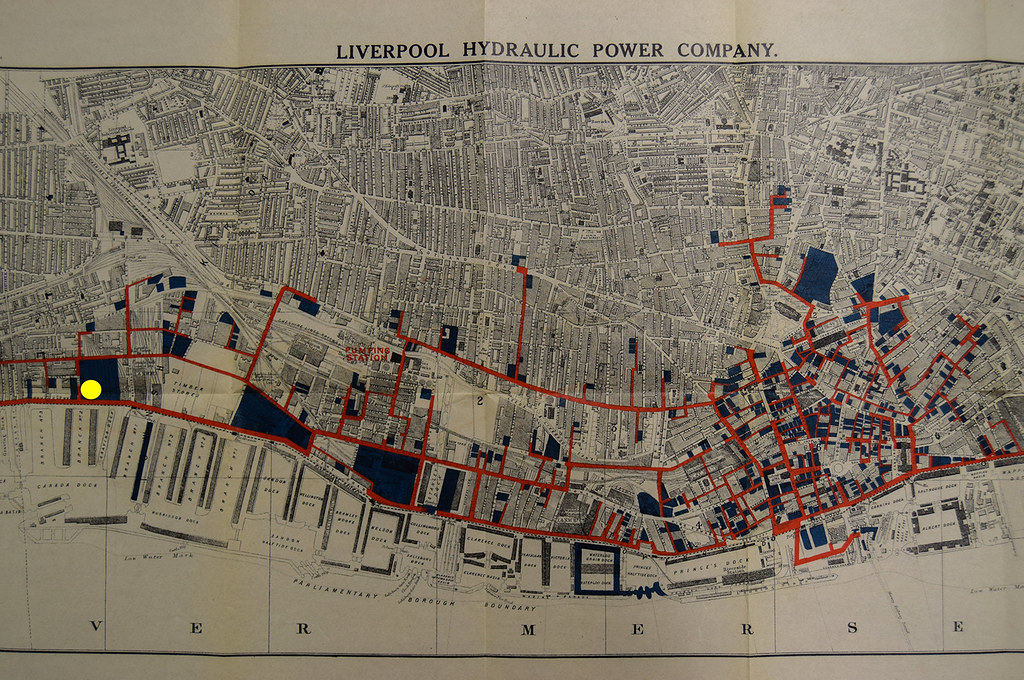 As far as current access goes, the ground level was welded shut about a year ago, even the slide down into the basement, so getting in is now more entertaining. Photos go from the basement up.

A rather young-looking junior in a puddle from our first visit - there is a (flooded) set of stairs going down to a sub-level. 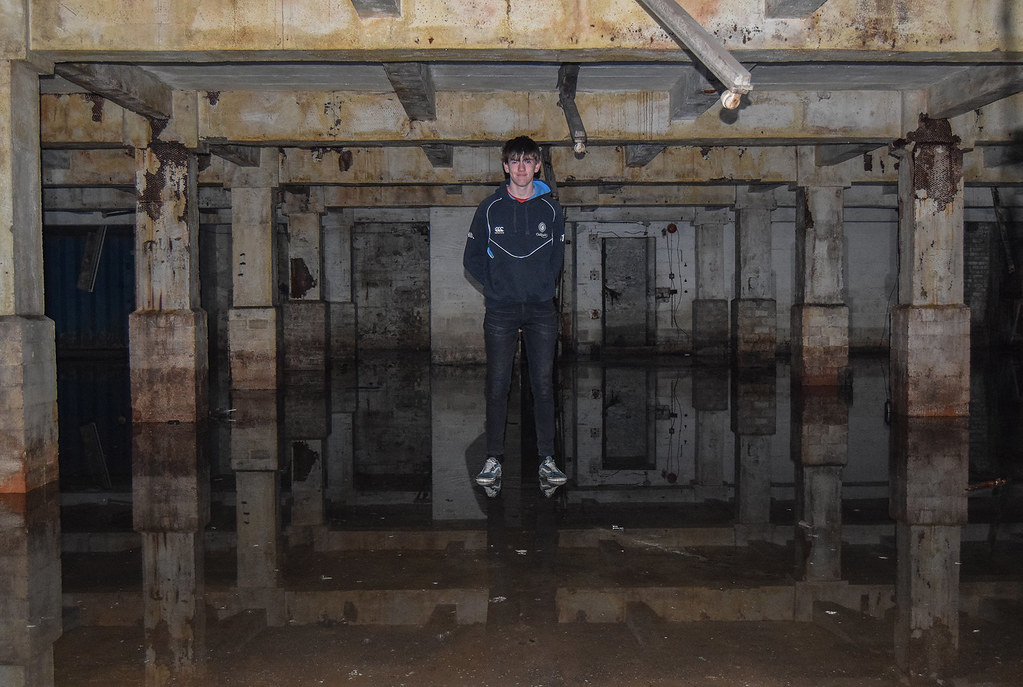 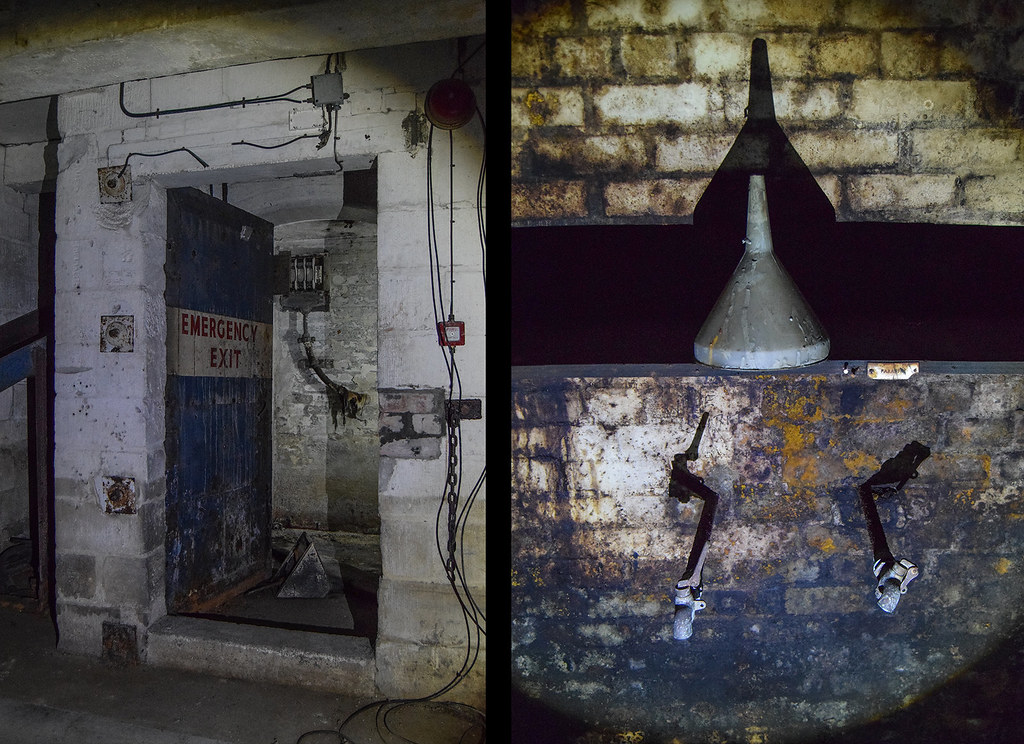 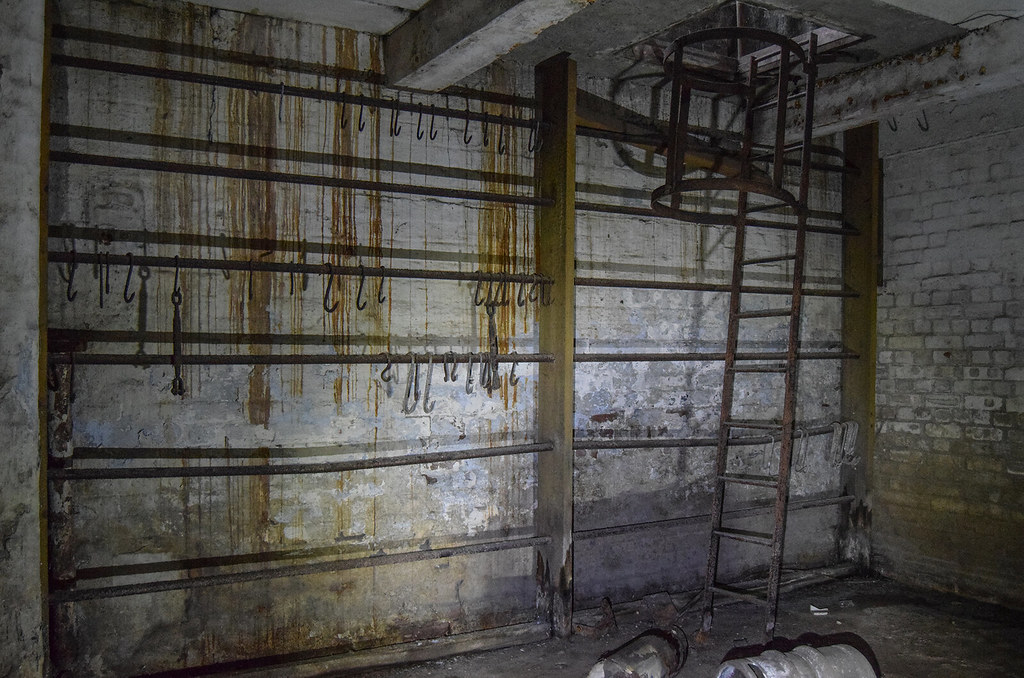 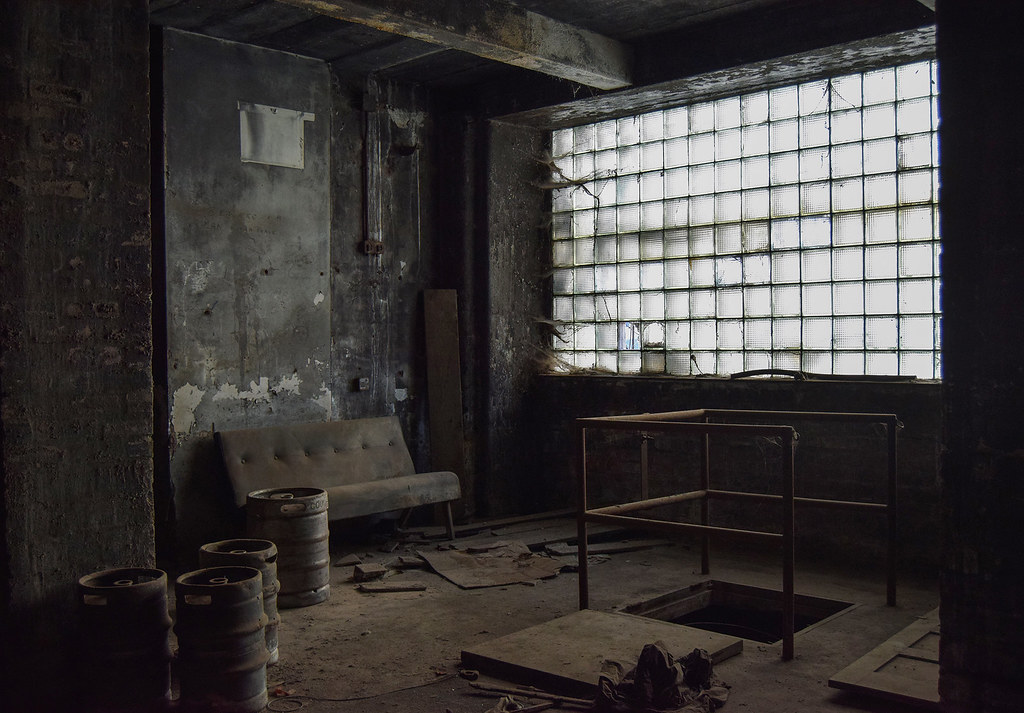 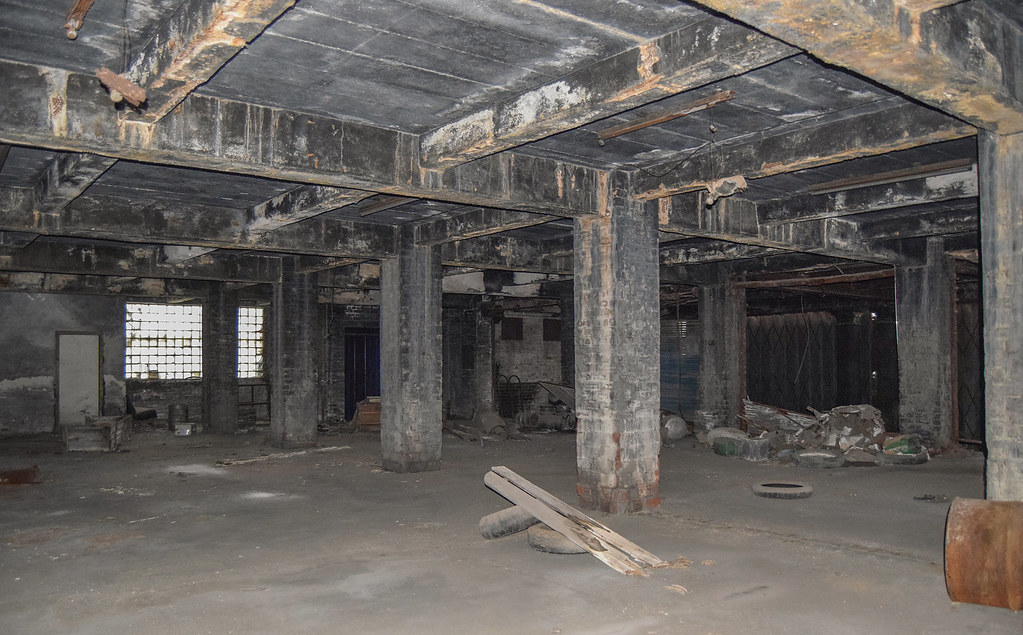 The office on the ground floor has pneumatic tubes for sending orders to the upper floors. 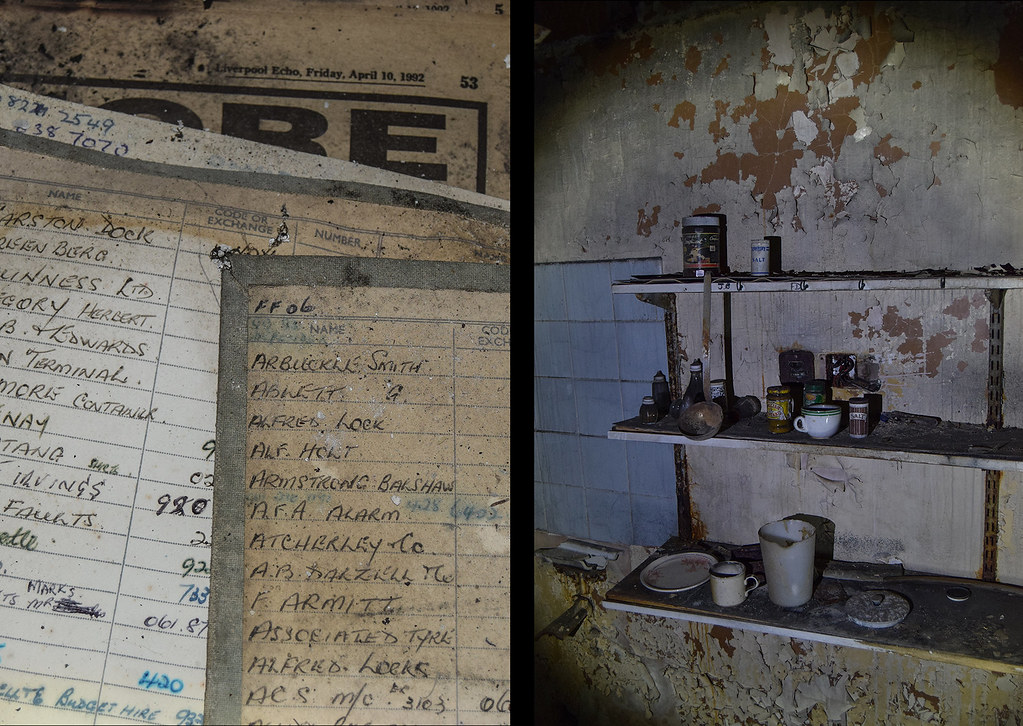 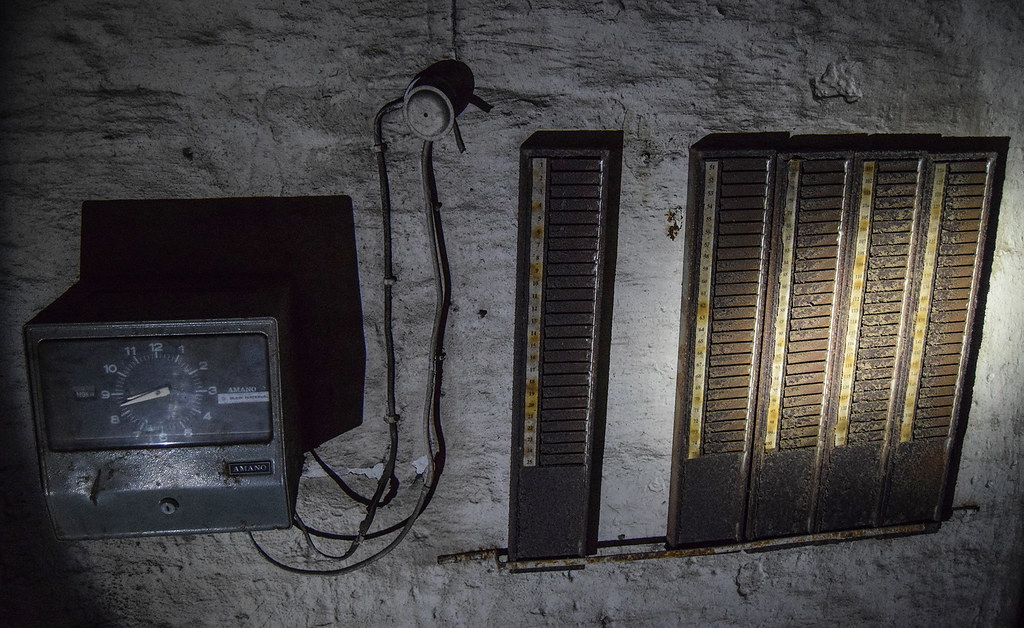 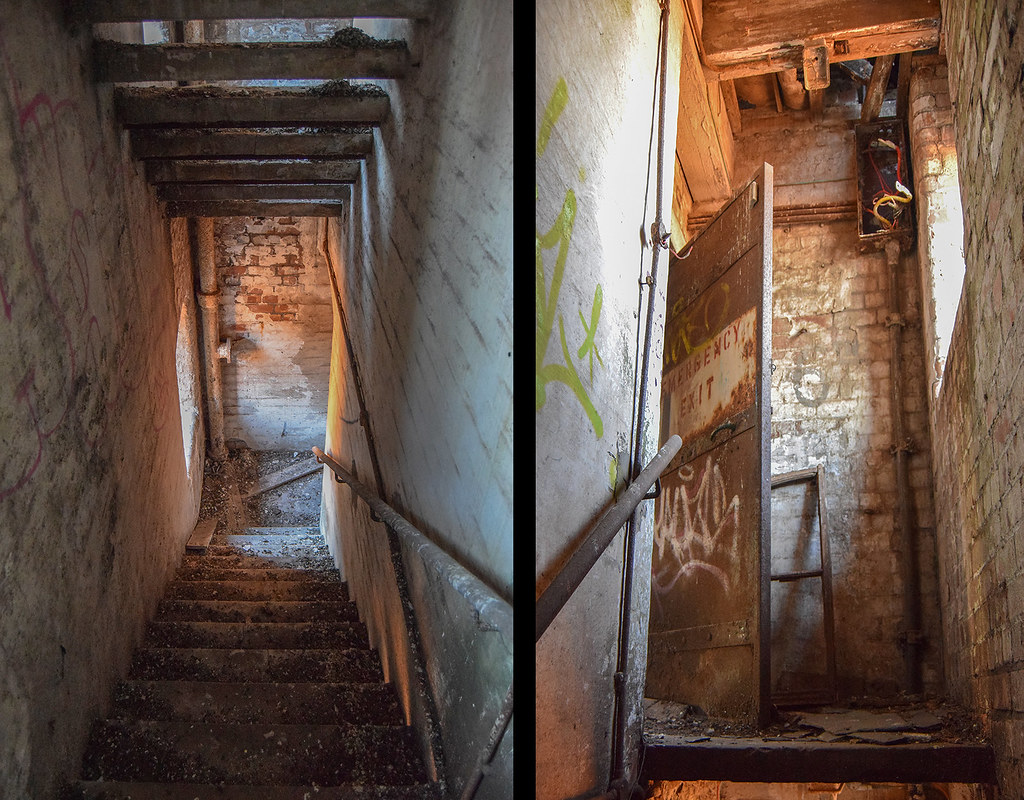 Main offices on the first floor - a lot of alcohol and tobacco companies it seems. 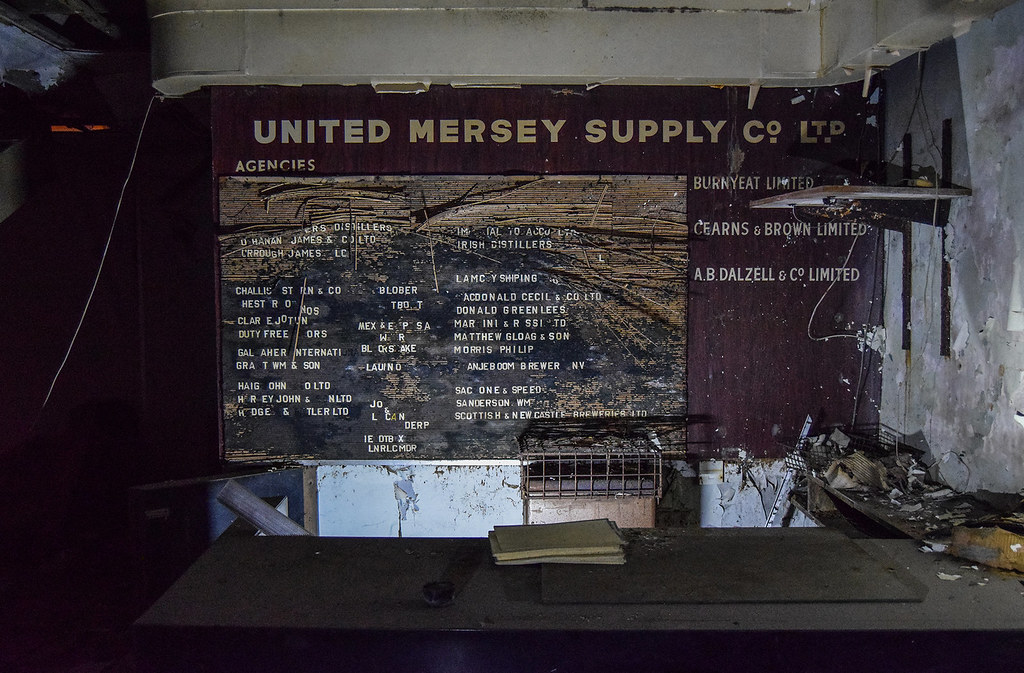 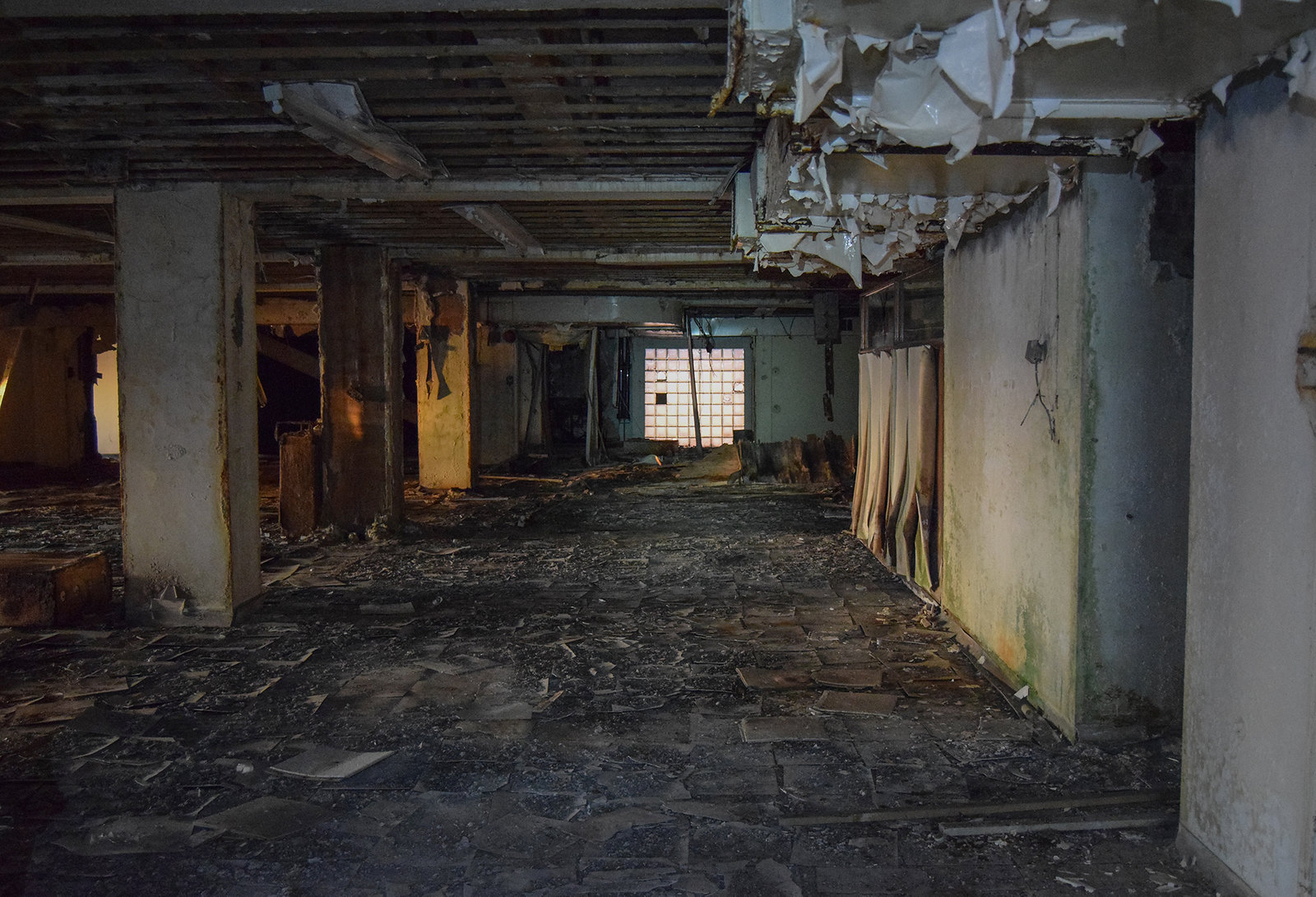 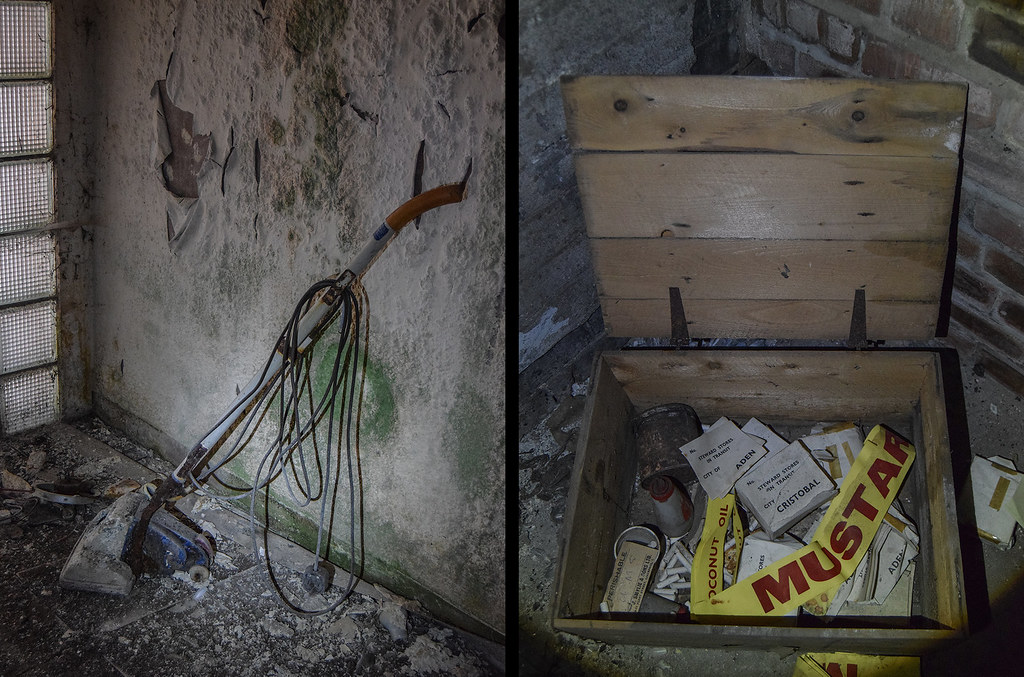 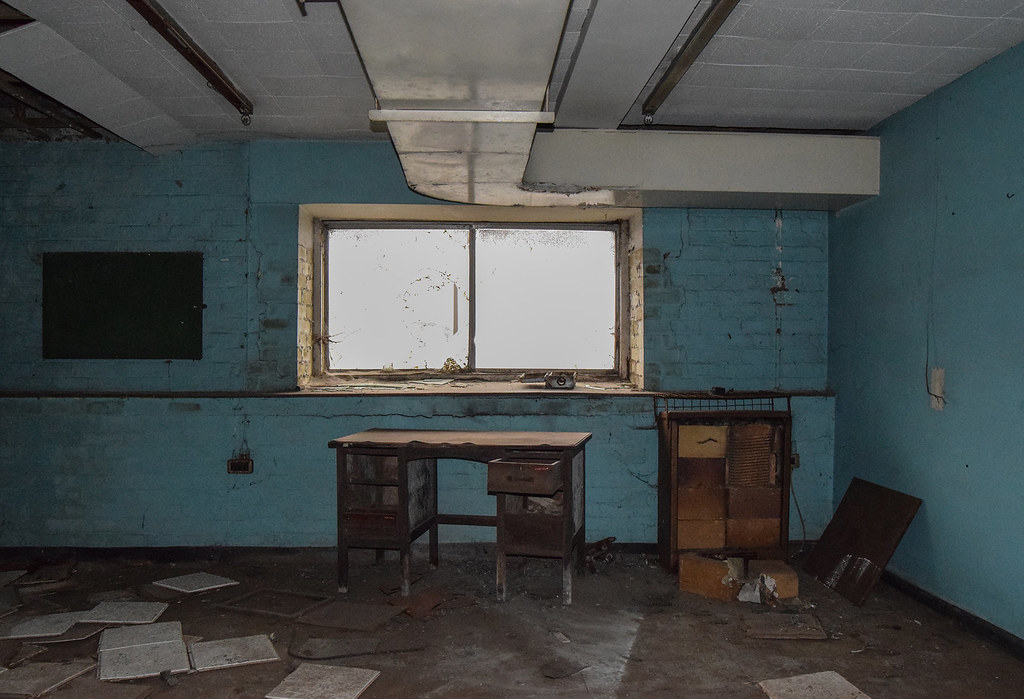 Several of these cages, presumably for the more valuable stuff. 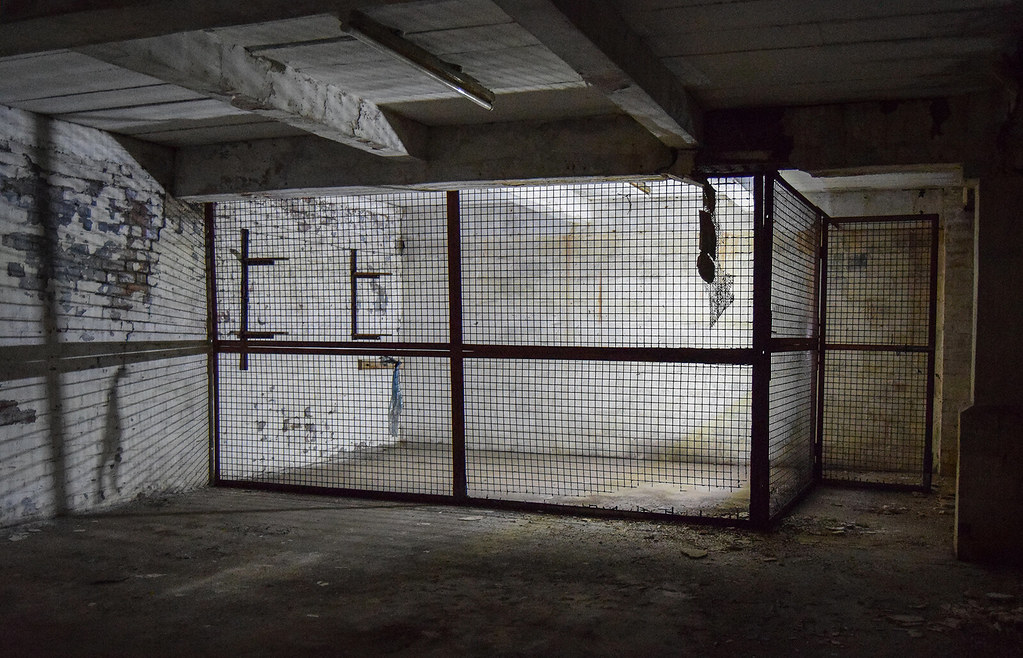 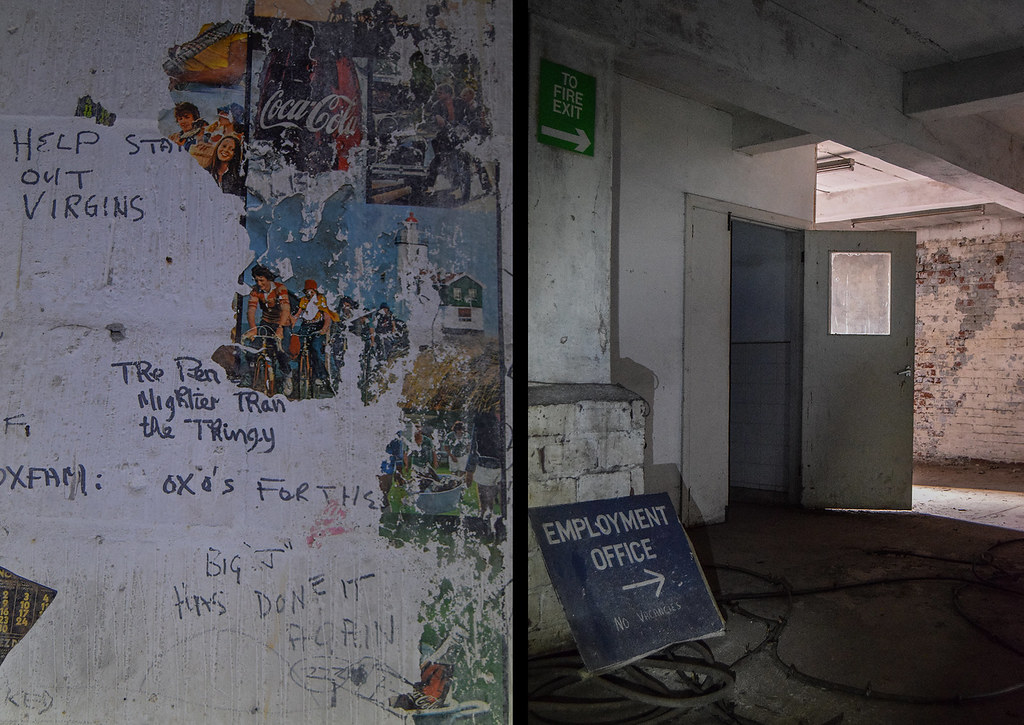 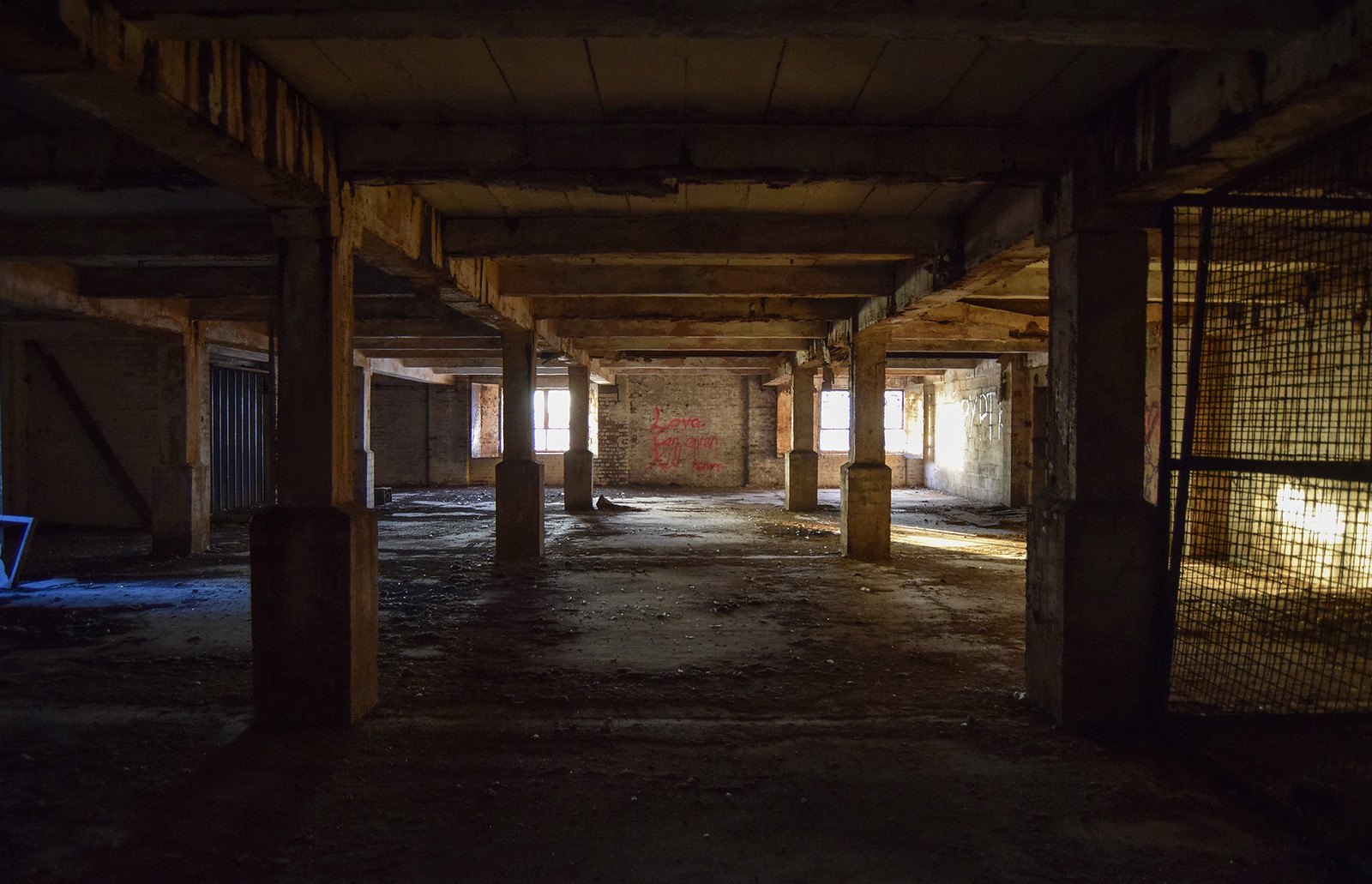 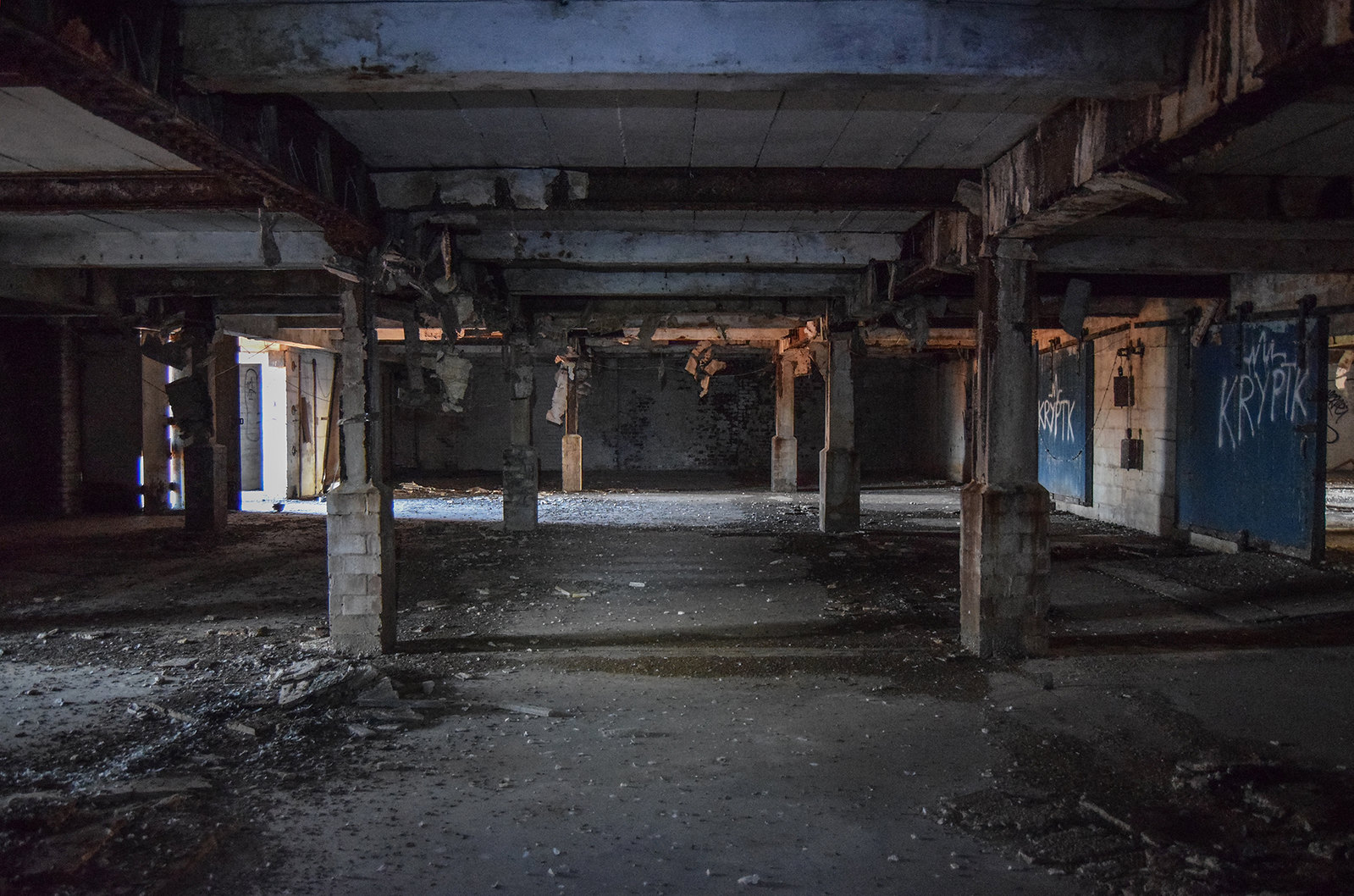 Top floor - another chunk of roof has collapsed since I was here last. 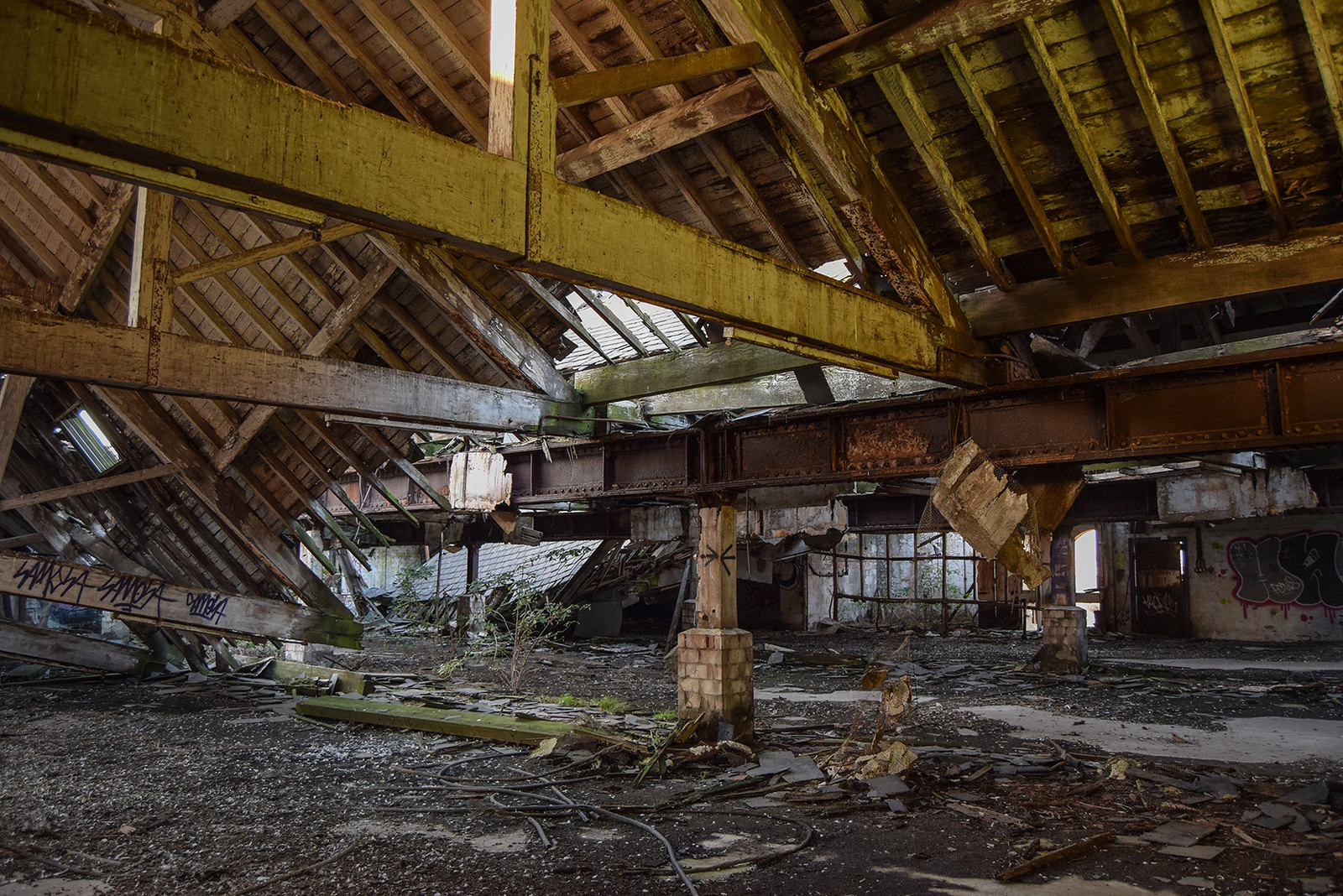 Looking above the haulage bays, nothing at the rear of the building except a wheel (not visible in the view up shown on the right). The electric motor is for a little freight lift nearby. 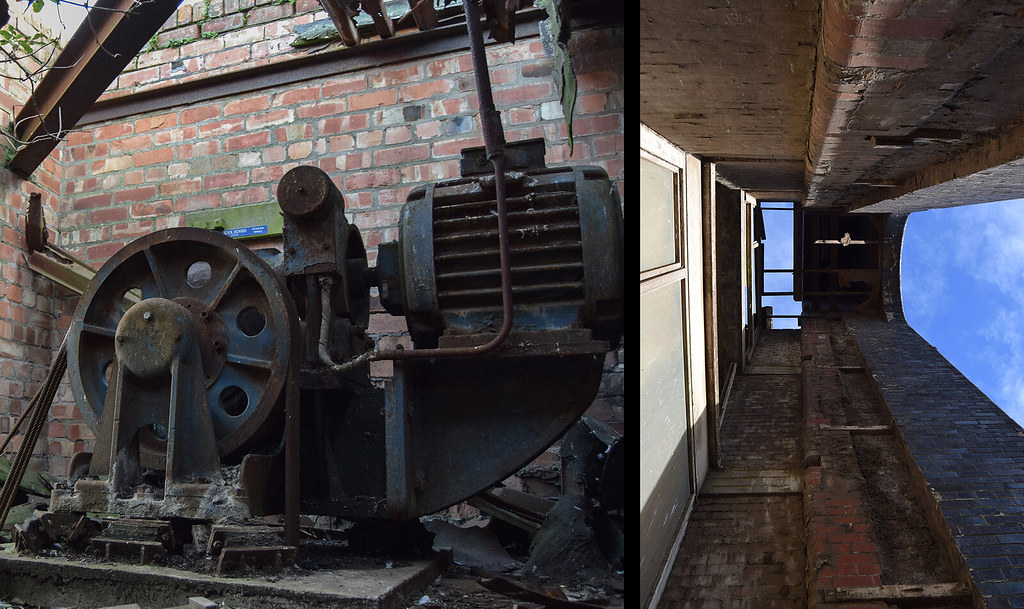 An electric hoist at the top of the left bay (looking from the road), installed in 1966 just after United Mersey Supply moved in. Evidently a successful hoist design since the company that made this is still supplying virtually identical units. 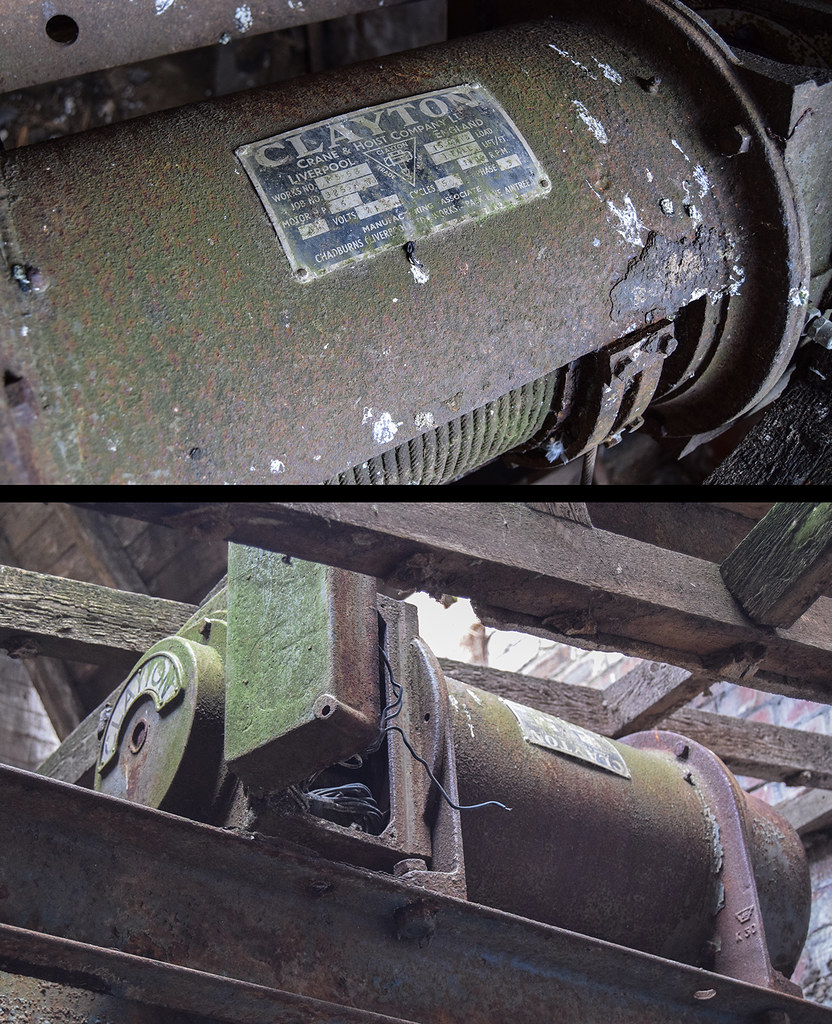 Nothing but a few more wheels above the middle bay. 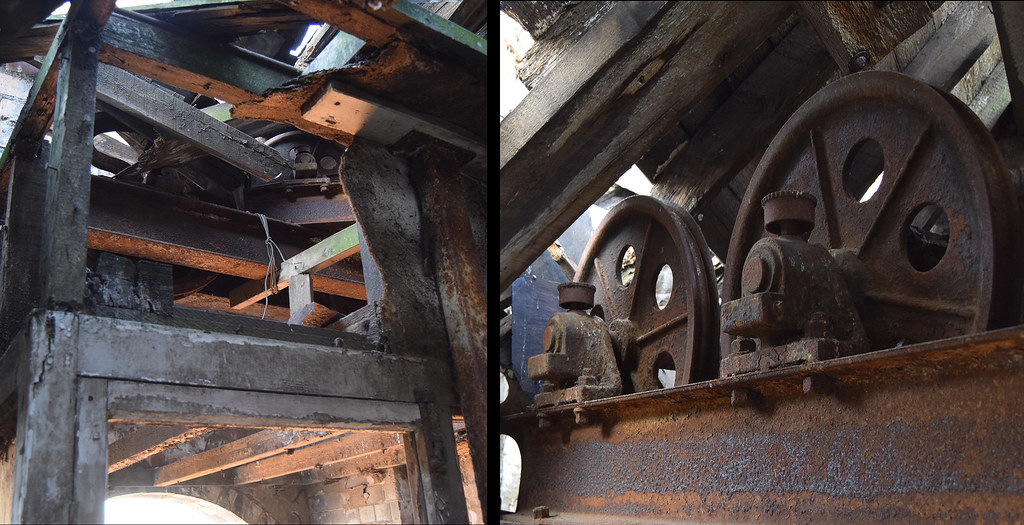 And above the right bay, a jigger. This was in an area that is still in the process of collapsing, so it was difficult to get close enough to look for a maker’s stamp or plate. 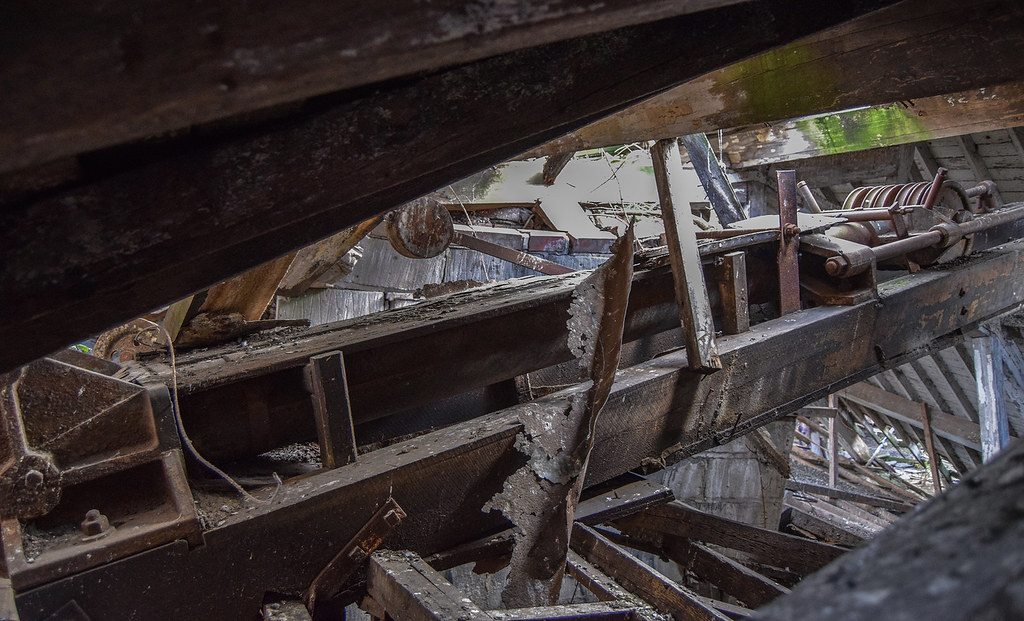 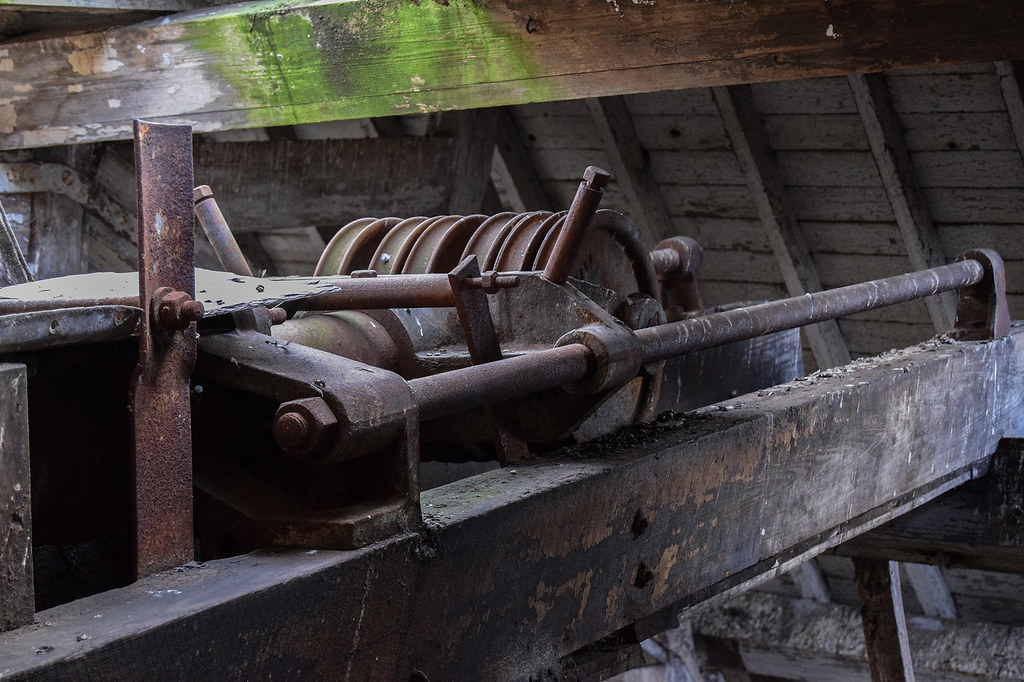 The jigger is supported above a wooden trough, presumably to catch the leaks - I imagine these things hissed and dribbled a bit since seals in those days were leather.
Mounting over troughs seems to be a common setup - below are a couple of jiggers in the attic of the Manc Museum of Science and Industry. 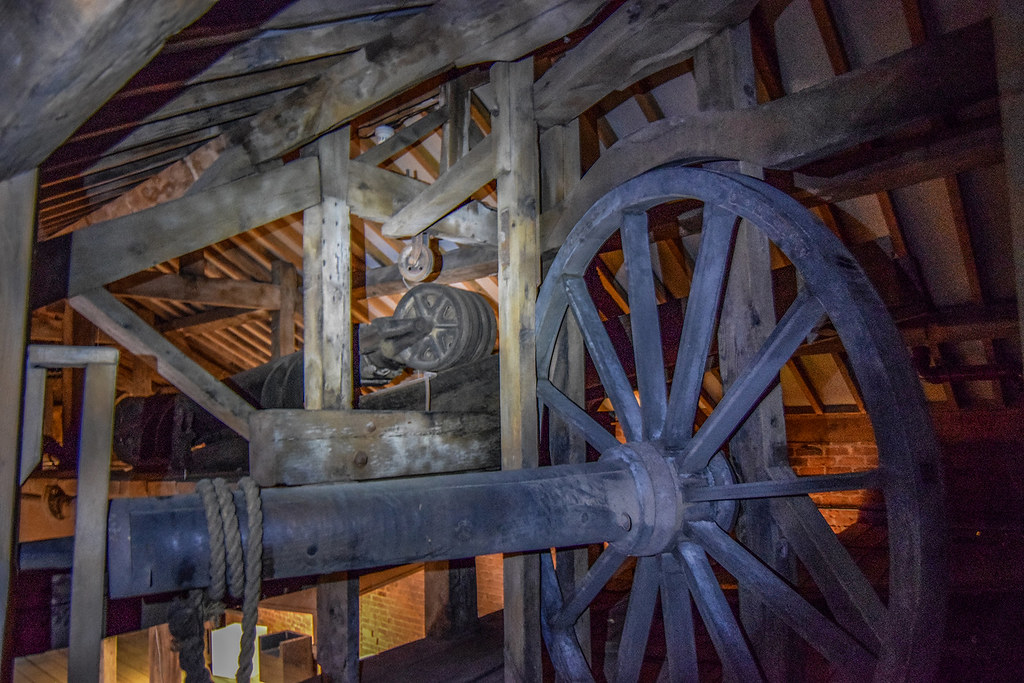 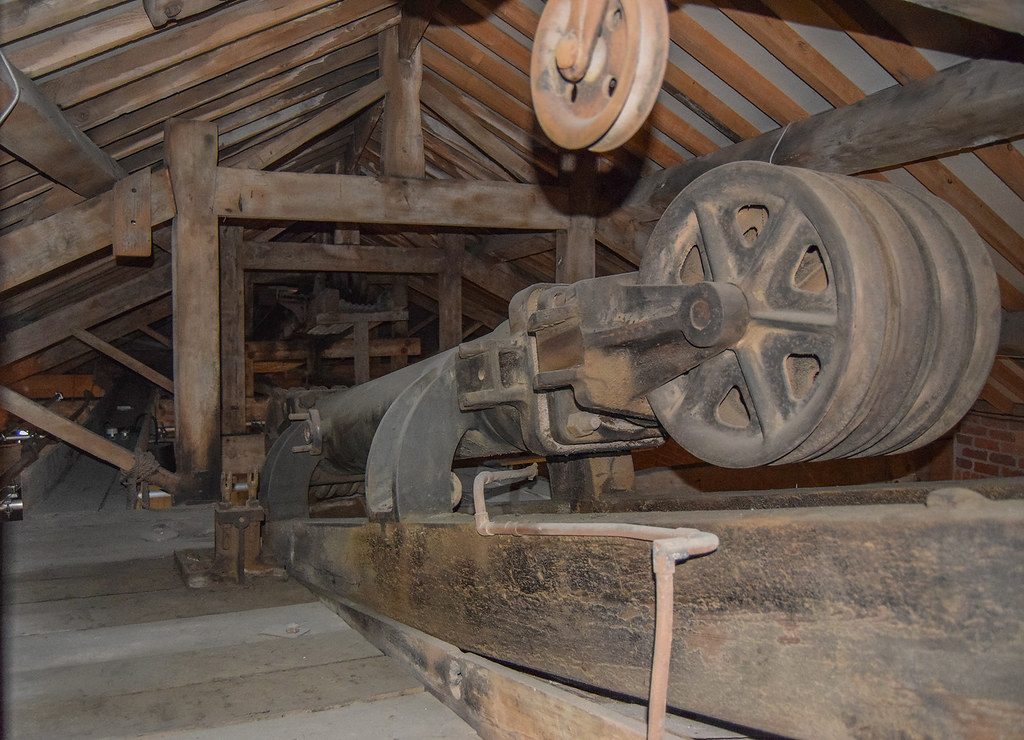 While climbing up to look at these I was being filmed by a passing Japanese tourist - probably wondering if it was some sort of new interactive visitor experience.

Finally up to the battlements to inspect the roof, and a couple of views of Canada Dock over the road. 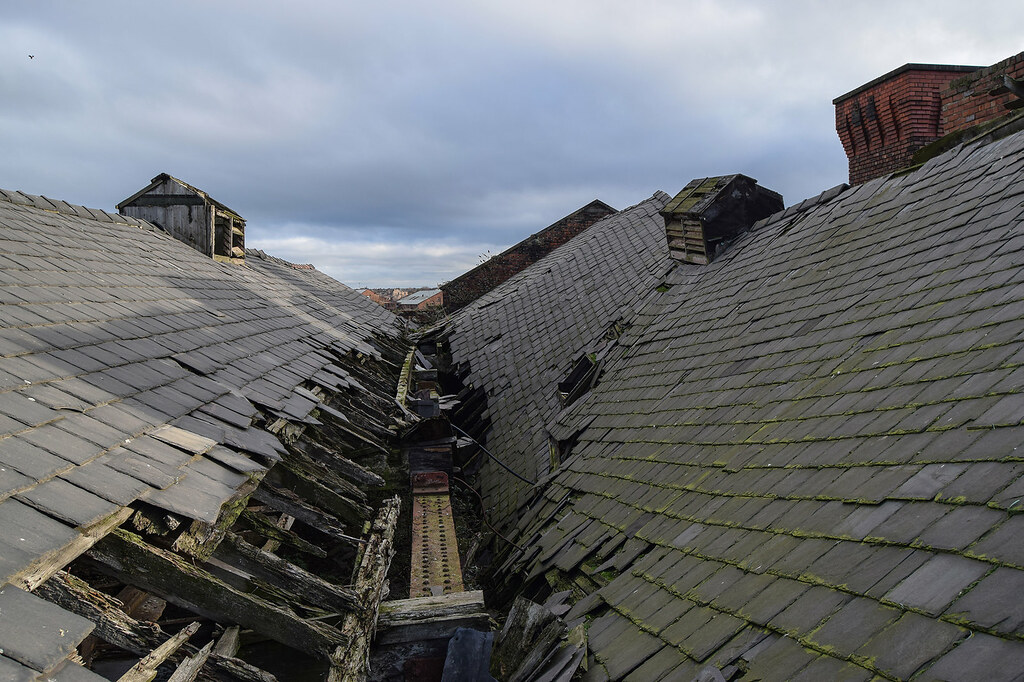 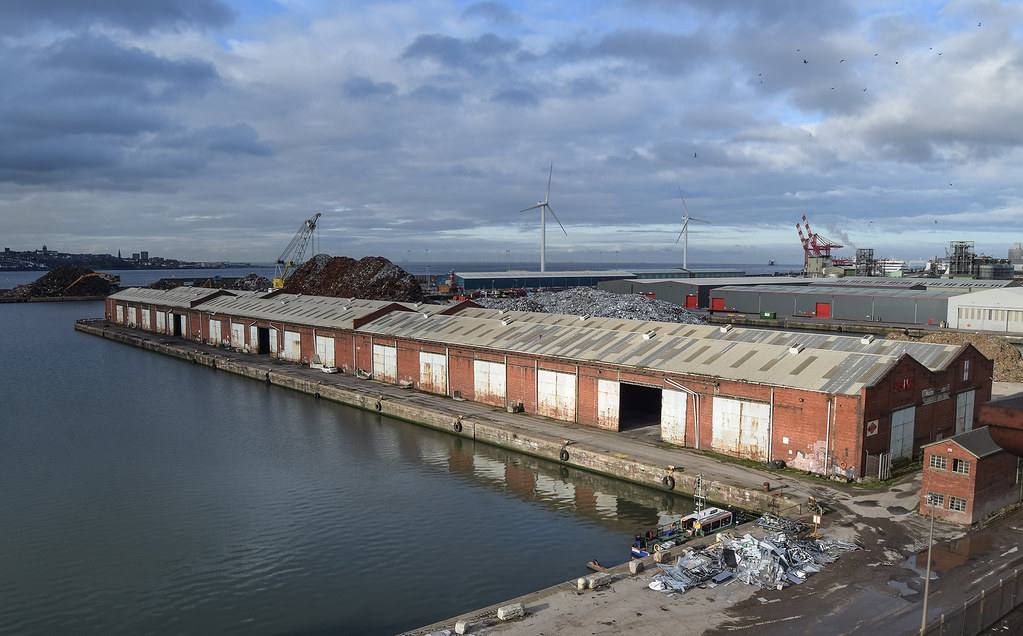 Regular User
I've got to admire your persistence finding these. Nice one.

Regular User
Fantastic report and pics. And big up for getting all the way to the top!

Regular User
Excellent report. Plenty to see in this one. Really into your dock reports Thanks for sharing

Regular User
A very in-depth report I love that you go the extra mile with your details and shots. Yeah when I went it was so easy. I really enjoyed this place.

28DL Full Member
Another great report loving the roof shots too. Has to be the best report from here ive seen.

28DL Full Member
Pretty Excellent picture on this one.

28DL Full Member
Love those pictures...the one with the funnel in is really a stand out one!
When I leave don't save my seat, I'll be back when it's all complete.

28DL Full Member
Smashing report as usual Chemist. Its always nice to see your reports, keep it up chap!

But fuck me this place is still around, tried this place a few years back when the back was being demolished.
Jacob Kelly
-
jacob.k.10.2012@gmail.com

28DL Full Member
I didn't expect to be seeing this again! Got a fond nostalgia for the place, and spent far more time in there than is probably advisable. But there's a bunch of stuff in your shots I've never seen before, that crate is a great find.

They did a really thorough welding job and removed the fire escape when the redeveloped next door, no idea which way you guys got in but well played!


EDIT: For the fellow history nerds, I stumbled upon a rare photo of the building in use in the 1960s: 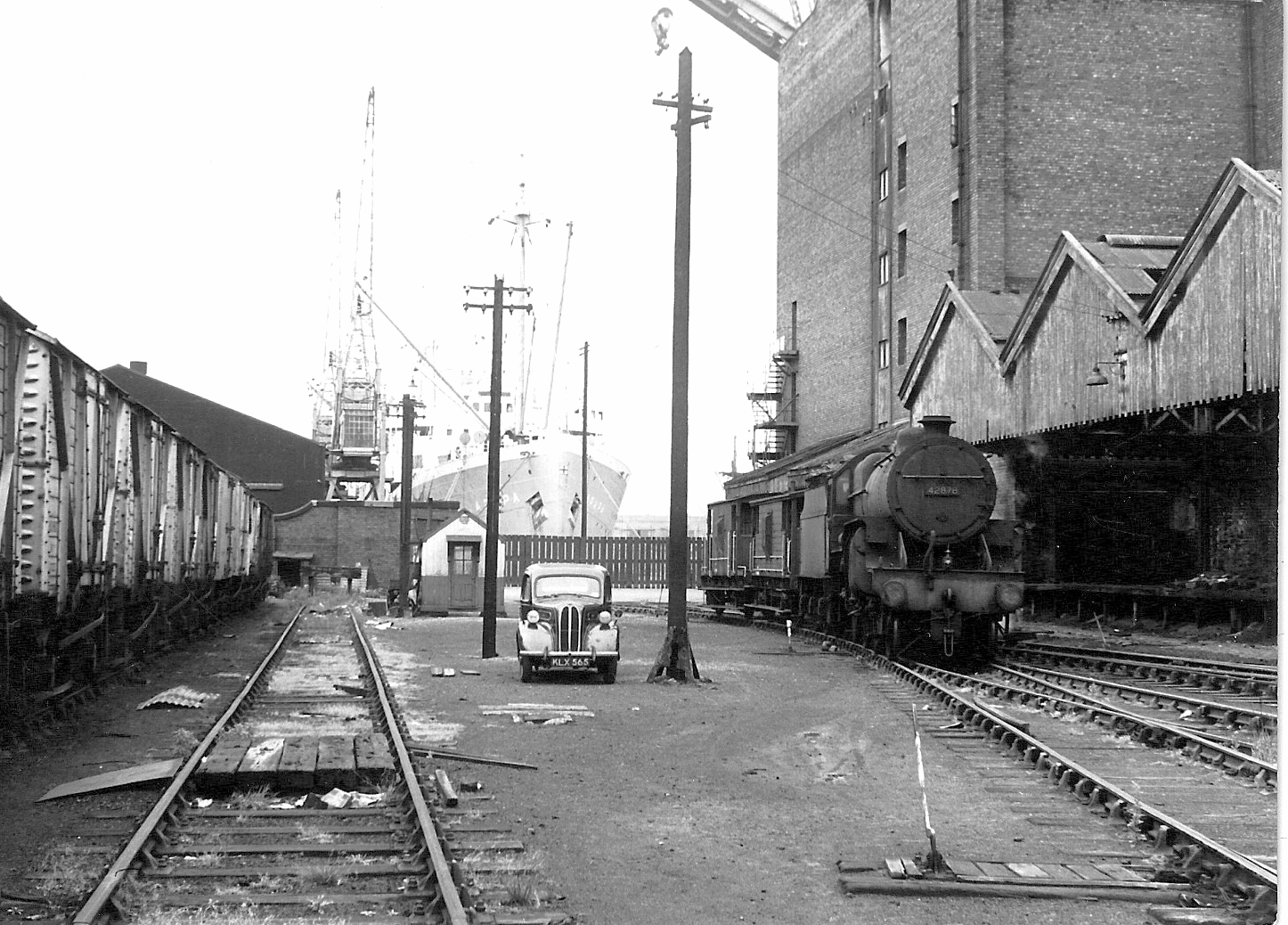 There's also a lovely aerial photo that shows the warehouse in its heydey (with a big 'J Irving & Co' sign on the front): 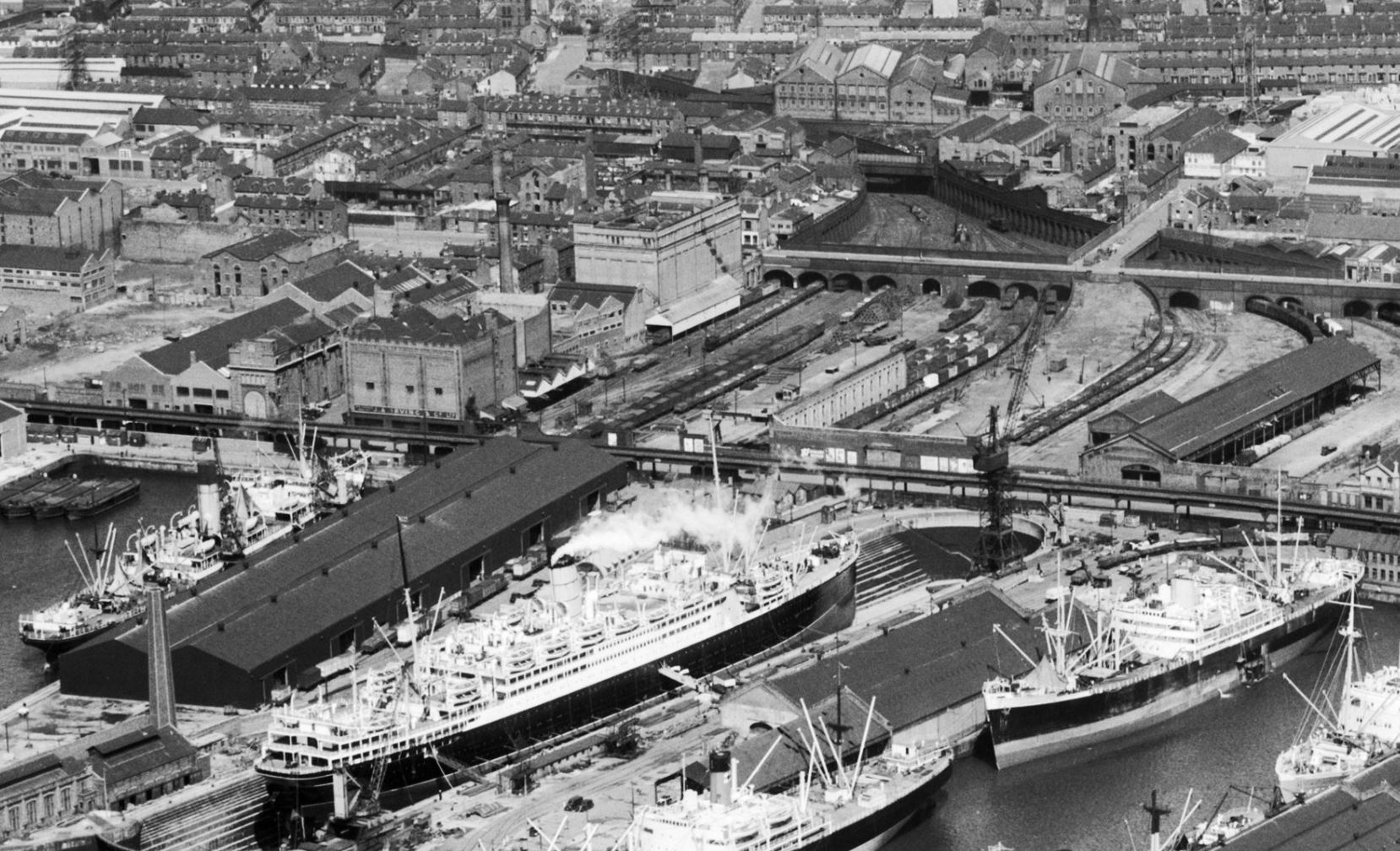 Nothing riveting but it adds a bit of context. And curiously it looks the fire escape only used to go up 3 floors or so, so the rest of the doors must have been added in the 60/70s.
Last edited: Jan 20, 2019
History geek, musician, photographer. Digger and guide at the Williamson Tunnels.
I also create film presets if you're into that type of thing.
You must log in or register to reply here.
Share:
Facebook Twitter Reddit Pinterest Tumblr WhatsApp Email Link