By far the most impressive building in Diggle is the admin block at what was the Dobcross Loom Works; built in 1860. When the loom works closed down the site then became the home of W H Shaw's Pallet works for 37 years until 2006, reputedly one of the largest pallet works in Europe. The site was then partially leased by Patterson & Rothwell, a plastic manufacturer which explains the millions of plastic beads littering the site, it's no wonder the River Tame which runs next to the site is the most plastic polluted river in the world.

The stunning building at the entrance known locally as ‘The Cathedral’ the main building housing the clock tower. The building with the clock tower is a Grade II listed building and any future development of the site will have to incorporate that building into their plans. Nothing is left of the loom works, but the Pallet Works’ site, covers 22 acres.

For the last 10 years the site has been earmarked for the location of the new Saddleworth Secondary School, a local campaign managed to delay the inevitable outcome and as of the 24th of February demolition work has started. The link bridge which was also was trying to be saved was the first victim of the demolition claw, one side of the tunnel was connected to a building which wasn't listed, and from my understanding it was down to the developer whether it remained or not.

I decided to have one last look at W H Shaw's in Diggle, been visiting the site for about 15 years now and photographing the derelict buildings. The demolition team are now at the gates to flatten much of the site, the admin building / clock tower is grade 2 listed so should remain. I had previously reported on this site in 2011 and have been in every few months over the years.

The site has been ransacked over the years by metal thieves, the admin building managed to avoid the majority of the vandalism, well until the last 12 months when slates have been removed from the roof opening it to the elements. The clock bell has also been stollen which is a real shame in the last 6 months, pushed through a cast iron decorative panel and dropping 40ft to the floor below. In 2015 shortly after the site was purchased to be developed, someone essentially did some targeted vandalism to the workings of the clock. This had been looked after by a local man who also managed to find a unique replacement part to replace a worn out bit of the clock workings, it was a metal insert from a wellington boot which matched the damaged part perfectly. His last entry in the maintenance sheet on the 25th of April 2015 sort of sums up the demise of this old mill.

Photos are just in the order of my last stroll through, but added a couple of historical ones from previous visits. This is the Northern half which was occupied until a few years ago by Patterson & Rothwell, plastic beads make the floor like a skating ring.

About the only thing left in here, must be quarantined for a reason.

Now totally stripped by metal thieves, it wasn't that interesting before they came anyway.

Looking back across the vast open space from one of the offices. Last photo from this side of the site.

The Southern side of the site is more interesting, the buildings are slightly older and contains the maintenance office, locker room, link tunnel to the admin block / clock tower as well as the separate canteen building. The ground floor is now a little damp, the recent weather has not helped.

Upstairs is not much better, but quite nice for some photos of the reflections.

This image is from 2011, an innocent photo of some dead pigeons on the now flooded floor. Well that's what I thought! A few months ago my phone rang while out for lunch with my wife, a phone call from India, nearly put it down as it usually seems to be a call centre! Not sure what kept me on after I said I'm not interested and then heard one of my photos was being used for propaganda and causing an international incident. The lady calling had grabbed my interest.

Seems a photo I took 9 years ago of some dead pigeons in W H Shaw's (Dobcross Loom Works) in Diggle was causing a bit of a stir in Kashmir, I found out the lady who phoned was from India and trying to dispel false news. Happy to say my dead pigeons were not from the Jamia Mosque Srinagar, but a derelict mill in Saddleworth. Links below are to the false news article and then exposure of the pigeons just being Saddleworth ones

Just shows how easy false news can be generated! 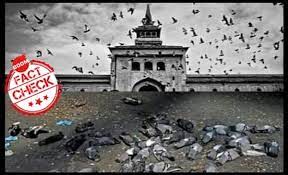 No, Pigeons At Srinagar's Jamia Masjid Have Not Starved To Death | BOOM

BOOM found that the image of the dead pigeons is from the United Kingdom.

Anyway on with my stroll, one of the best view of where I was hoping to see next.

That was after one a quick visit on to the roof of this building to admire the gravity defying chimney (how's it's not fallen down I don't know), a last farewell to the water tower and a quick peak at where I was heading to, access had always been entertaining.

Looking at the admin block you can see all the lead flashing and slates removed opening it up to the elements.

Back in the Southern building and the start of the fantastic link tunnel to the Admin block. There has never been access to this building through the tunnel, door was very secure and alarmed. Only exception being the night of 23/05/2015 when shortly after the developer purchased the site a couple of blokes kicked the door down, ran all the way to the top of the clock tower and bent a critical cog on the clock workings. This meant the local guy who went through the front door every few days to wind the clock up and maintain the mechanism was no longer required. Power was cut off and the locks changed in the weeks to follow. Even though there has been offers to repair the mechanism for free since then, it has been turned down by the now owners.

Little did I know at the time I'd be the last person to make this crossing, a lovely bit of engineering / architecture which was crushed 14 hours later.

Well now the admin block, a lot of people have wanted to see inside of here for years, I'd even tried to hook up with the local man who maintained the clock. People will have been in, but it was always quickly secured, that was until about 18 months ago when Richard Ringlefinch Caufield cracked the access issues (sadly he passed away just before Christmas) but I still smile when I remember getting that text from him.

The ground floor must have been opulent especially for what in the end was just a pallet works. From dry carpets 12 months ago, the floor now resembles a swimming pool. Not shown here but the tiles, the stained glass windows and general fittings and fixtures are stunning.

Onwards and upwards and the spiral cast iron stairs to the upper floor are again stunning, the owner of the pallet works was offered thousands of £'s for Tham but would never sell. Shame they are now smashed up in the main.

This leads you to the access shaft to the clock tower, and it's a special clock.

Once up in the tower, you can see why the local man enjoyed looking after it for many years.

It is a thing of beauty.

Not trashed, well apart from the targeted vandals.

I could and did spend a bit of time up here.

Here's the cog damaged in 2015 after someone broke the door down, they had the run of the whole admin block, but this was the only damage done!

Last photo of the clock mechanism.

Roll on the 24th of February 2020 (the day later) and the first bit of demolition was to the historic link tunnel. Seals it fate, just hope the developer is more sympathetic to the admin building.

I'll finish off with the final entry on the clock maintenance sheet from Maurice on the 24/05/2015, clock broken at 8.15 on Saturday night. Time of the crime recored on all 4 clock faces.

The story about the ingenious repair to the clock workings using a bit of a wellington boot - https://www.examinerlive.co.uk/news/west-yorkshire-news/outlane-engineer-paul-jacksons-million-to-one-4988697

Link to Maurice's reaction in the local news paper to the vandalism, also shows the bell that was stolen recently - https://www.oldham-chronicle.co.uk/news-features/8/news-headlines/92124/vandals-wreck-village-clock

In roughly 5 week the site will be flat apart from the admin block, demolition team are on the site for the duration and work has started already.

End of an old friend for me, always will remind me of another friend who cracked the clock tower. Involved in a international incident in its final years.

Be sad to see this old girl go.

Regular User
Lovely stuff. Super glad I made the effort last month, those glazed tiles in the admin are rate nice.

Regular User
Excellent report, it must be sad times for you to see it go!
Stop The Planet, I Want To Get Off!

Regular User
I do hope they invest in repairing the clock mechanism and dont just put some shit electric movement in it.

Regular User
There was a locked up room at the end which had injection moulding stuff stored in it, is that all gone or all going for scrap?
This was the worst site I've been too for dead pigeons and pigeon crap, sometimes 6 inches deep, very unhealthy lol.

Regular User
Love the clock shots, id spend ages there too. So intricate, the local man should be commended on his care of the clock, I can see over 13 yrs of dedication, brilliant

28DL Full Member
Was here recently and never cracked the admin building access, so many thanks for giving us a view inside. Such a shame about the clock mechanism. Great pictures and info.

AEaXn said:
Was here recently and never cracked the admin building access, so many thanks for giving us a view inside. Such a shame about the clock mechanism. Great pictures and info.
Click to expand...

It was a bit er sketchy when we did it eh lone ranger lol
Stop The Planet, I Want To Get Off!

Bikin Glynn said:
It was a bit er sketchy when we did it eh lone ranger lol
Click to expand...

We had an idea, but it was raining and looked damn slippy on the outside of that bridge.

AEaXn said:
We had an idea, but it was raining and looked damn slippy on the outside of that bridge.
Click to expand...

yeah raining when we did it too & youve guessed it lol
Stop The Planet, I Want To Get Off!

28DL Full Member
Excellent report i visited here 2 or 3 years ago and didnt gain entry wished i had more of a look round now. I know how easy it is to get attached to a site or building and its always sad to see it finally go.

Bikin Glynn said:
yeah raining when we did it too & youve guessed it lol
Click to expand...