Question - - What camera and lens should i get for a beginner | Kit / Clothing / Equipment | 28DaysLater.co.uk
Menu

Question - What camera and lens should i get for a beginner

28DL Full Member
I was wondering would anyone be able to point me in the right direction of a good camera and lens that would be good for someone like my self looking to get more into photography instead of taking images from my phone. As I would like to get better high-quality images.

Regular User
That really is an open ended question & rather depends on budget.
I would say an essential feature for exploring is a "live view" mode so you can see the sort of exposure you are getting on the screen as you take so look for a camera with that.
Its worth holding some money back for a tripod too as anywhere remotely dark & it wont matter how good your camera is if u dont have one.
Lens wise go for the widest poss, I use a 10-20mm which is superb for giving a wide feel to indoor spaces.

Regular User
More or less any camera you can get nowadays would be sufficient, it's more a matter of what you can justify paying really. Any DSLR or MILC commonly available today is going to do the job. You don't necessarily have to be spending a fortune on a camera, I used a relatively inexpensive Nikon D3100 for several years without issue and it was more than up to the job. I use Fuji now but that was more down to just wanting something different as opposed to thinking it was going to make me take better photographs.

If budget is an issue then picking up pretty much any relatively recent second hand Canon or Nikon DSLR will be a good starting point, both systems have a wide range of compatible second hand lenses available that won't set you back too much.

Wide lenses are especially useful for this sort of thing, but it can also be handy to have maybe a 35mm or 50mm for some different shots. Generally longer lenses are pretty much pointless for this application, so unless you have a specific use for one I wouldn't bother.

As mentioned above a fairly decent tripod is pretty essential, I've used some cheap (around £20) nasty ones and invariably they tend to fall apart after a bit of abuse. It's worth spending just a little more, maybe around the £50 mark to get something that feels solid. You can of course go all the way and spend hundreds of pounds but I can't see the point personally.

There are quite a few people on this forum who more or less exclusively shoot using mobile phone cameras, and to be honest nowadays I can barely tell the difference.
http://www.ravenwing93.co.uk

Regular User
Seriously don’t spend lots of Money........years ago I spent £600 on a Nikon d5000......I still have it,it’s been perfectly fine and I’ve not felt the need to upgrade.I still don’t know what some of the functions do

It’s the D5000’s performance that really sets it apart from the entry level toys. In single-shot mode it can take pictures as fast as you can press the shutter button. Zoom Ring: Smooth action and moves easily throughout the focal range.
www.ebay.co.uk 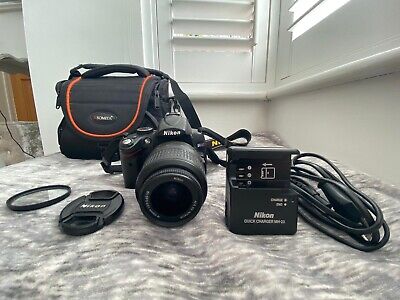 Regular User
It depends entirely on what budget you have to play with.

The big names in cameras - Canon, Nikon etc all produce affordable starter DSLR kits if you're looking at getting your first one, the best thing to do is experiment with a few from different makers and find which one is the most intuitive and easy to use. Live view is a great tool so make sure what you're looking at has that as a feature as it makes shooting a hell of a lot easier, and I think it's pretty much standard on all DSLRs now. If you're on a budget you'll most likely be looking at a crop sensor and not a full frame as they are a lot more expensive and if you're a more casual/hobbyist photographer who just likes to go out and play with a camera at weekends there's no point in owning one. As others have said invest in a good heavy tripod if you're getting a DSLR as the cheap aluminium ones struggle to support the weight and you don't want it to collapse. Manfrotto is the go-to for high quality tripods and once you start using them you will never go to another brand.

I had a Canon 550D for years and it was the most robust, reliable, hard working piece of technology I've ever owned. It never missed a beat and never once let me down despite all the abuse it took, and it was only within the last couple of years I finally upgraded to a new 80D as it needed to be retired. I've used a Sigma 10-20mm f3.5 wide angle for almost a decade now and those lenses are now ridiculously cheap as they are old technology, but still very usable and an exploring mainstay. I believe you can pick up a 550D for about £150 now as well.

From a personal perspective I could never use Nikon, as in the decade I've been using Canon equipment numerous friends who've been using expensive Nikon gear have had it break down, go wrong, or stop working and my Canon stuff has continued perfectly fine. Don't take my personal experiences as gospel though it's all about working out which is best for yourself.
I'm not from Birmingham.​

28DL Full Member
Personally for myself I've got a

Regular User
I would go down the phone route before spending lots on expensive cameras unless you plan on printing large prints or plan on getting into photography seriously, a good torch and any of the newish phones out these days can be just as good if you dont want to edit the images like crazy in post or print wall size prints.

Pointless spending shit loads on a camera when you are afraid to use it underground or something and it stays at home.

Lenston said:
I would go down the phone route before spending lots on expensive cameras unless you plan on printing large prints or plan on getting into photography seriously, a good torch and any of the newish phones out these days can be just as good if you dont want to edit the images like crazy in post or print wall size prints.

Pointless spending shit loads on a camera when you are afraid to use it underground or something and it stays at home.
Click to expand...

agree with that.......you can pick up phone tripods pretty cheap.
My last 2 underground explores I just used my phone and torch “iPhone11” and they came out pretty decent ,I’ve lost the love of carrying round lots of kit
https://www.flickr.com/photos/piratelukey/albums

pirate said:
agree with that.......you can pick up phone tripods pretty cheap.
My last 2 underground explores I just used my phone and torch “iPhone11” and they came out pretty decent ,I’ve lost the love of carrying round lots of kit
Click to expand...

I still prefer to lug one around if im honest but seeing recent images taken with new phones and a decent torch i can see the attraction of carrying minimal kit.

Regular User
Phones are definitely getting better but they're still shit for long exposures and not amazing underground.

Lord Oort said:
Phones are definitely getting better but they're still shit for long exposures and not amazing underground.

I'd disagree on the long exposures - they're becoming really good. I can point my phone camera in complete darkness, for 3-4 seconds and it'll come out with a crisp shot that would have taken 5 minutes to setup and do on my 750
Website: www.whateversleft.co.uk - County Asylums: www.countyasylums.co.uk​

Regular User
As I said they're getting better. But my Pixel 4, while excellent, still struggles like fuck in proper low light. What you using? as I'm yet to see a phone that can produce anything comparable to a proper DSLR long exposure.
-Needs a tripod and a decent torch.