28DL Full Member
For a few trips Wrysgan had been our back up mine on the way back to the car from another mine but turned out to be our back up mine following Croesor on the other side of the hill. Also while Wrysgan is one of the closest mines from the parking spot its still a bloody darn good hike!! Defending back down from the slate plateau to Blaenau my knees were like jelly I was literally struggling to put one foot in front of the other, It really makes you think of those who summit Everest they are only half way and still have the climb down yet there is 0 need to be up there..... Just imagine the Quarrymen who did this journey on a daily basis in all weathers with candle light or if lucky carbide light. 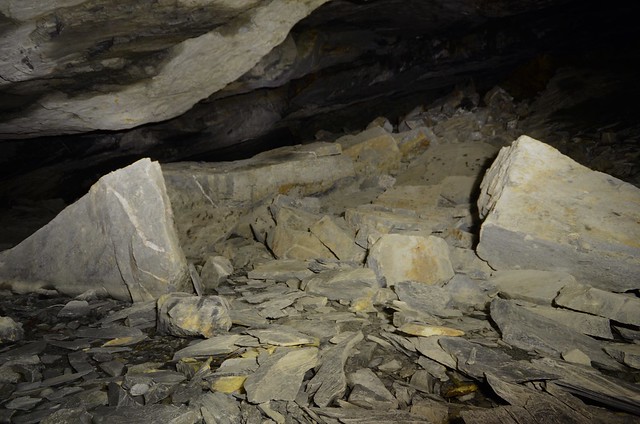 First things first.... to get any scale of the underground workings you have to appreciate to rocks to the left and right in this photo have fallen from the roof, the size of them can be compared to a light commercial van, the size of the chambers can easily accommodate a few large houses and they were mined mainly by hand pushing carts of slate and waste rock out by hand.


Wrysgan Quarry was an underground slate quarry, which was located on a small inaccessible site, some 1,390 feet (420 m) above sea level, to the west of Cwm Orthin. Extraction began in the 1830s, and finished slates were carried down a steep, zigzag path to Cwm Orthin.[2] Like many small quarries in the area, details are often obscure and complex, and there is little evidence of continuous working. Initially, land was leased from the Cwm Orthin and Ormesby-Gore estates, and royalties had to be paid to Cwm Orthin for slates extracted from that part of the quarry. William Roberts of Coed-y-Bleddiau opened it and then sold it, but the new owner lost money, and the venture failed. Methusalem Jones from Llandegai, Caernarvon tried to reopen it, but again lost a lot of money, although he did not become bankrupt. After some years of closure, a new group bought it in 1844, but were bankrupted by the high cost of the incline which they started to build.[3]

Around 1850, a new company, the Wrysgan Slate and Slab Quarries Co Ltd was incorporated, and completed an incline soon afterwards. Boyd suggests that this was the incline that connects to the Ffestiniog Railway, and was built at a cost of £5,000.[3] Richards suggests that it was down into Cwm Orthin, and that it was a balanced incline, with a pack horse track running from the bottom, for which there is clear archaeological evidence. A mill for the processing of the rock was constructed in 1854, and in 1865 a second mill was built at a lower level. It was equipped with 18 saws, 20 dressers and 2 planers. The feature for which the quarry is best known, a spectacular incline which descended 600 feet (180 m) down to the Ffestiniog Railway, and which passed through a tunnel towards the top, was completed in 1872.[4] The shape of the incline was a catenary, the same shape as a rope suspended between the end points would take, as was the main incline at the nearby Rhosydd Quarry,[5] but the foot of the incline was too shallow to allow it to be fully self-acting, and a stationary steam engine was installed to raise the empty wagons up to the quarry.[2]

Power to drive the mills was provided by waterwheels, supplied from a small reservoir, Llyn y Wrysgan, situated to the south of the main quarry buildings. The reservoir was filled by a leat, but the water supply was often inadequate.[6] When the site was auctioned in 1869, its assets were stated to include "two powerful water wheels and a steam engine."[7] At some point, a steam engine was installed to power the lower mill, and another was used to raise slates from levels opened up below the level of the mill. Steam engines proved to be costly to run, and the company tried to negotiate use of the unused Cross Mill at Cwmorthin Quarry. When the negotiations failed, they replaced the mill engine with a 50 hp (37 kW) producer gas engine, and a water balance was used to raise slate from the lower levels to the mill. A car engine was subsequently used to power this incline.[2]

The main incline was also problematical, as the boiler was undersized for the steam engine. The works were electrified in the 1920s, after which a novel solution to the problems of the main incline was introduced. Whenever empty wagons needed to ascend the incline, the main motor from the mill was borrowed and connected to the haulage drum. Later still, a lorry engine was used to power the incline.[2] Because of the intermittent working of the quarry, the incline was lifted in 1913, and was relaid in 1923 by the New Wrysgan Slate Quarry Ltd. A new siding was built at the foot of the incline, and the Board of Trade inspected the works on 7 October 1926. Track was again removed from the incline some time in the 1930s, and it was reinstated as a single track incline in 1940 by its new owner, T O Williams. It worked in this form until the quarry closed for good in 1946, on the death of Williams.[8]

In order to access the underground workings, five adits were constructed. Two were above the level of the main mill, and were connected to it by a balanced incline. A third adit was constructed at mill level. As the quarry developed, a further two adits were excavated to the north of the mill, and as these were below the mill level, an uphaulage incline was necessary to raise the slates for processing. This was constructed beside the original exit incline to Cwm Orthin. In the final days of operation, a rope haulage system was used to move the rock from the underground chambers to the foot of the incline.[9] Wrysgan, like most of the slate quarries in the Blaenau Ffestiniog region, was excavated as a series of chambers, will pillars of rock left between them to support the mountain above them. While the chambers in many quarries were 50 feet (15 m) wide, with pillars of 30 feet (9 m), some of the chambers at Wrysgan were exceptionally wide, at 130 feet (40 m), with only 50 feet (15 m) of rock left to support the overburden.[10] 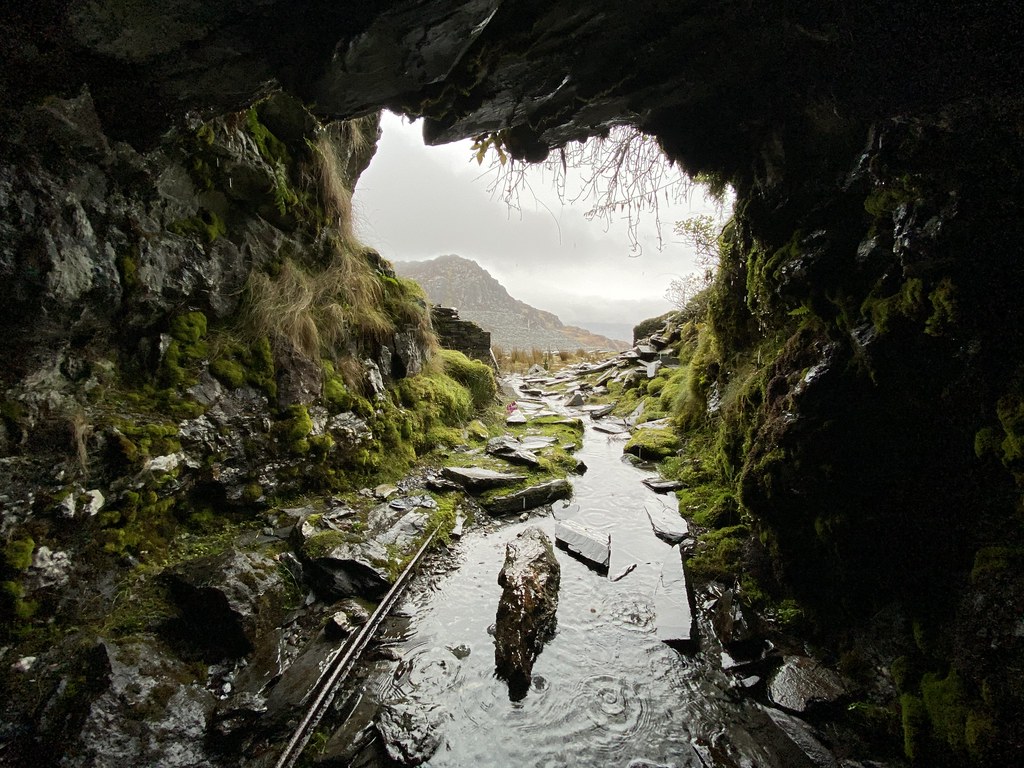 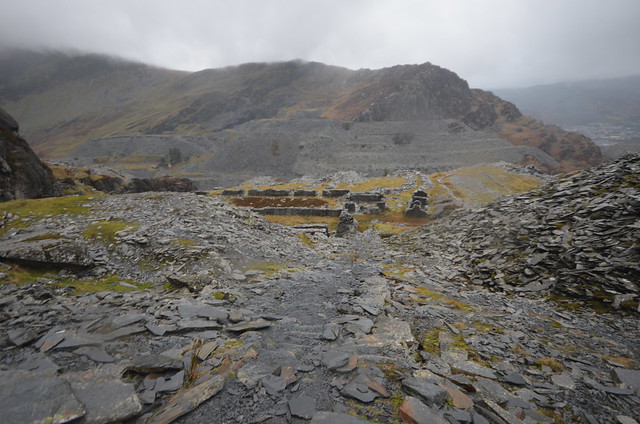 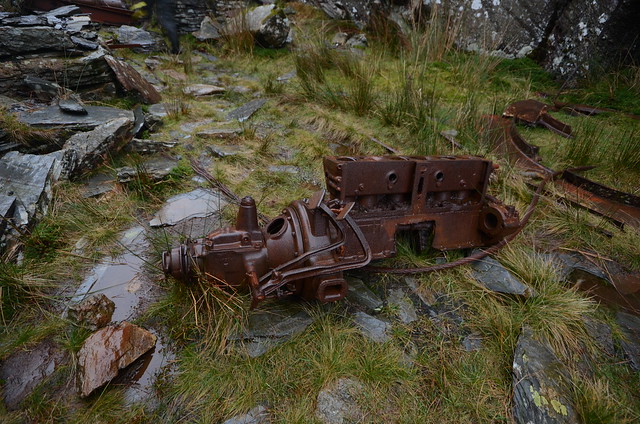 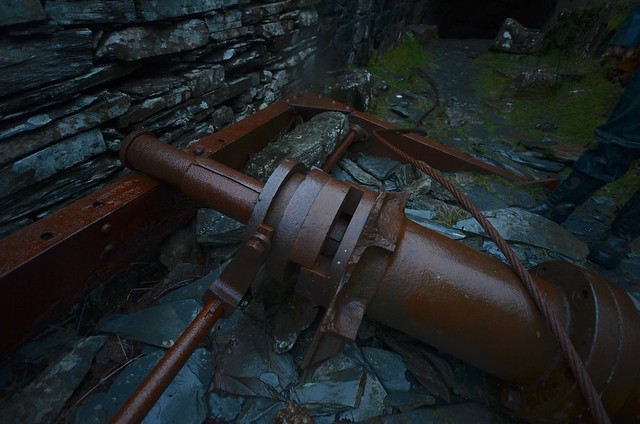 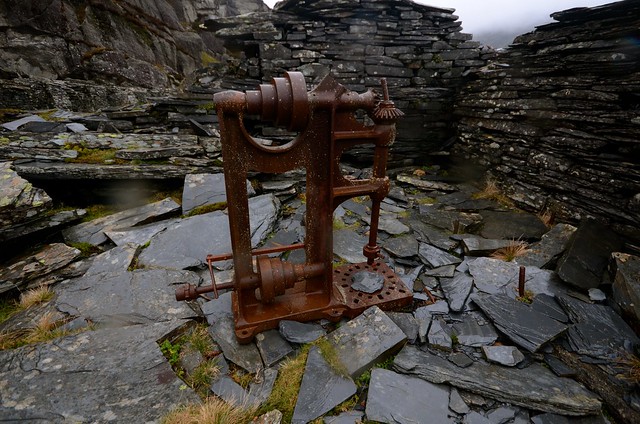 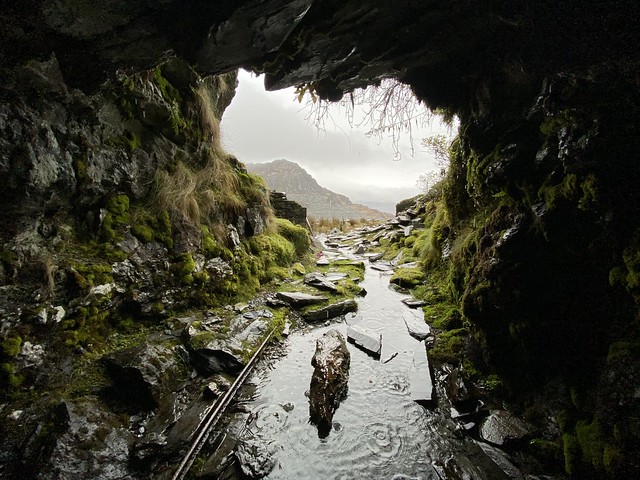 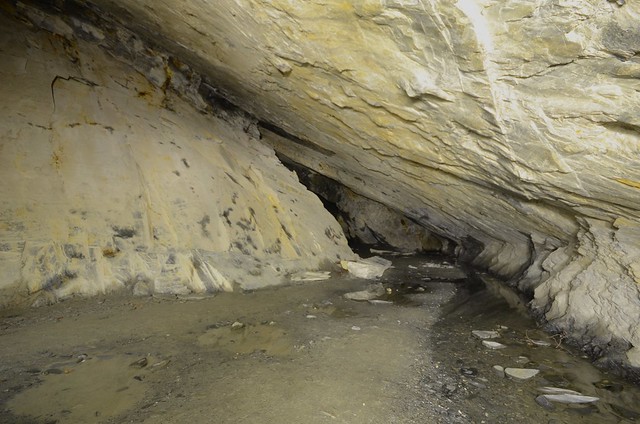 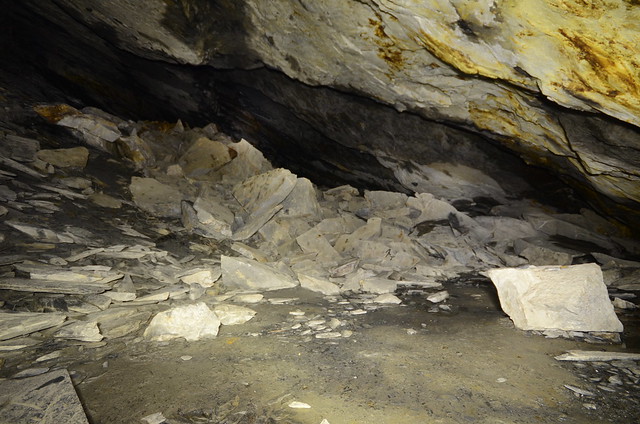 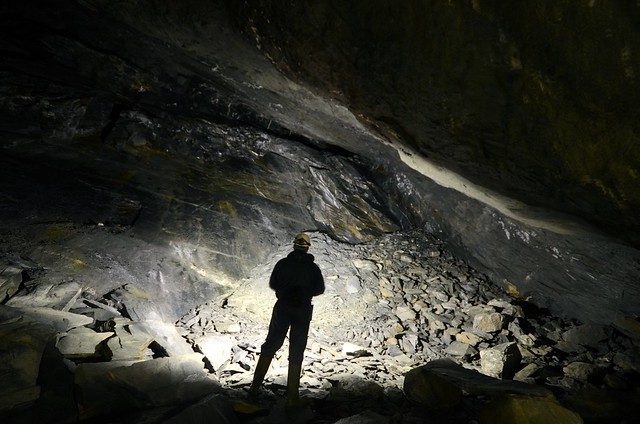 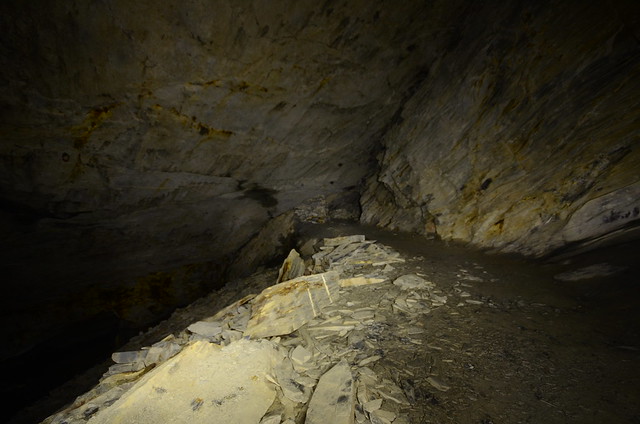 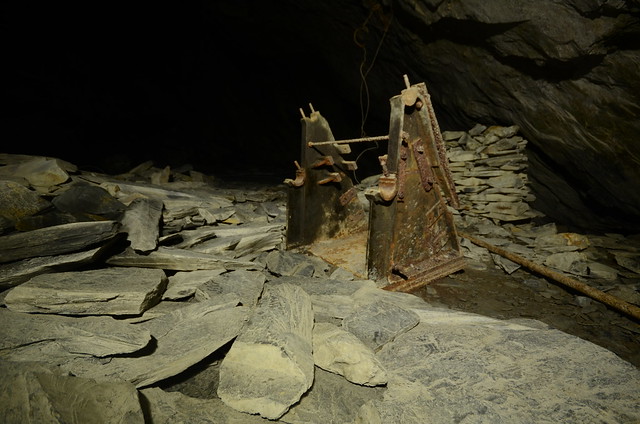 Regular User
Liking pic 5 a lot, shows nice layers, and a bit of old industrial machinery. Some of my favs. Good report this, especially if a back up