Regular User
Continuing my quest to bore everyone to death with my backlog of crap that never made it onto the forum at the time...

The Stanton Shelter was a segment shelter manufactured by the Stanton Ironworks, Ilkeston, Derbyshire. This shop producing spun-concrete lighting columns ceased production at the outbreak of war and turned over to concrete air-raid shelters, of which 100,000 tons were manufactured, principally for the air ministry. Reinforced concrete proved an ideal material for air-raid shelters, being strong and resistant to shock with no deterioration with the passing of time. This type of segment shelter was of simple design and of low cost—any length of shelter could be built up from the pre-cast steel reinforced concrete segments. The segments were 20 inches wide; a pair of them formed an arch 7 feet high and transverse struts were provided to ensure rigidity. These fitted into longitudinal bearers which were grooved to receive the foot of each segment. Each pair of segments was bolted together at the apex of the arch and each segment was also bolted to its neighbour, the joints being sealed with a bituminous compound. The convenient handling of these segments enabled them to be transported onto sites where close access by motor lorry was not possible. Partly buried in the ground, with a suitably screened entrance, this bolted shelter afforded safe protection against blast and splinters. At airfields having the Oakington pillbox, they can be found as underground shelters with access from the pillbox via a tunnel (such as Bicester and Oakington).

I would guess many examples survive today, mainly at RAF airfields. These are some that I have found in the vacinity of my home.

Opened in 1940, RAF Chilbolton was used by both the Royal Air Force and then later by the United States Army Air Forces. During the war it was used primarily as a troop carrier airfield for parachutists. After the war it was used for military jet aircraft training before closing as an RAF station in 1946. It was the first RAF station to operate de Havilland Vampire jets. The airfield was then used until the early 1960s by the Vickers-Supermarine and Folland aircraft companies for flight testing and development flying. Today the remains of the airfield are located on private property. In a small business estate are the remains of thirteen Stanton shelters.

A plaque commemorates the former RAF Station. It shows the picture of a the American-made Waco CG-4 glider 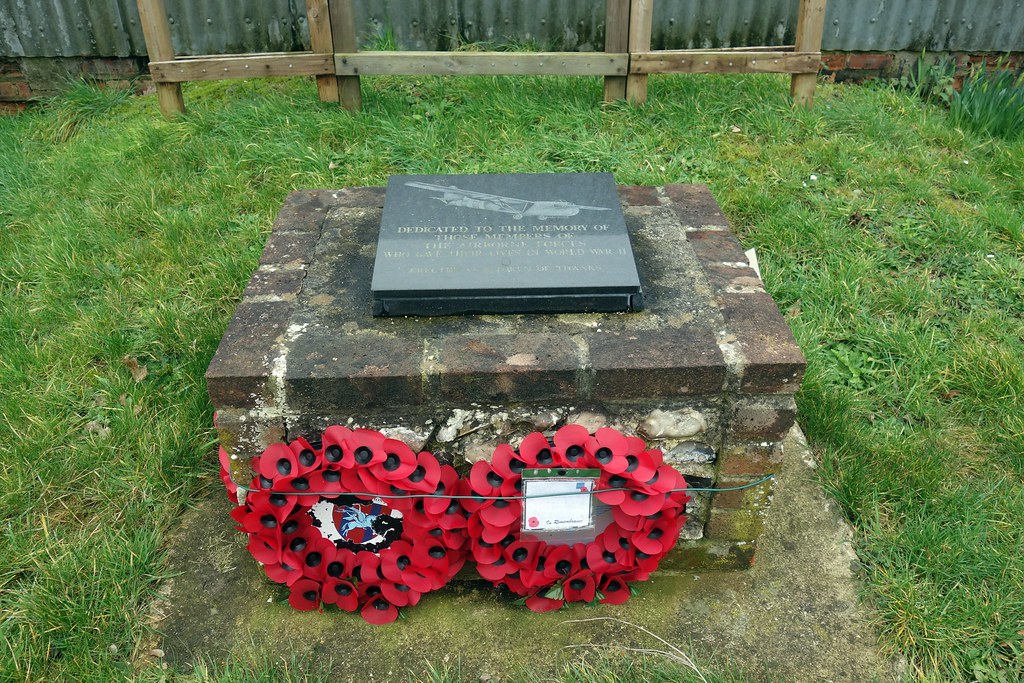 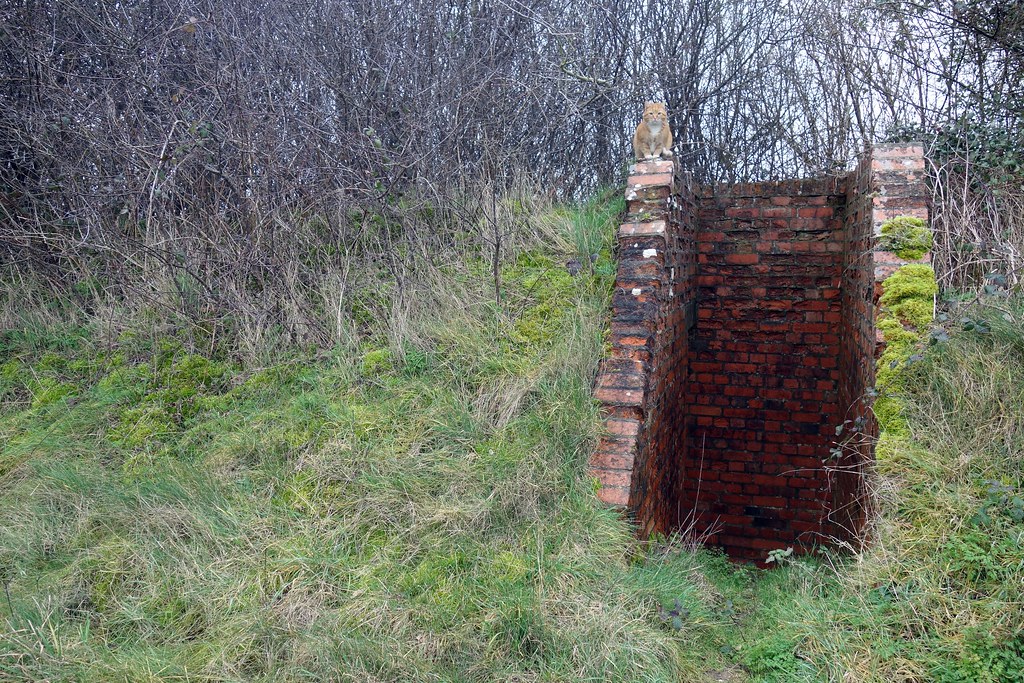 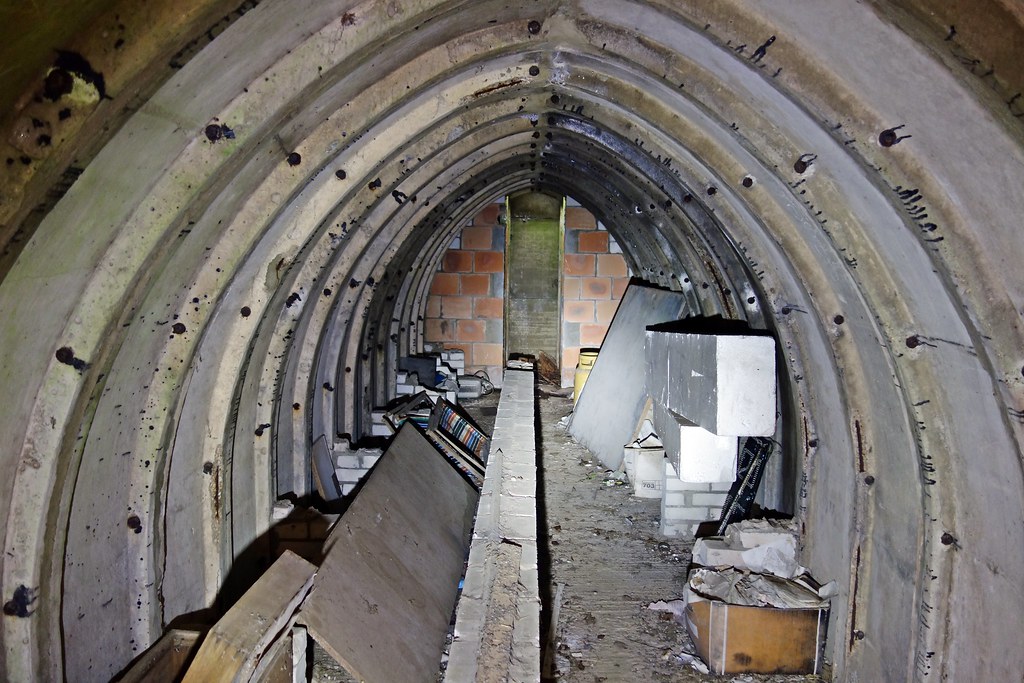 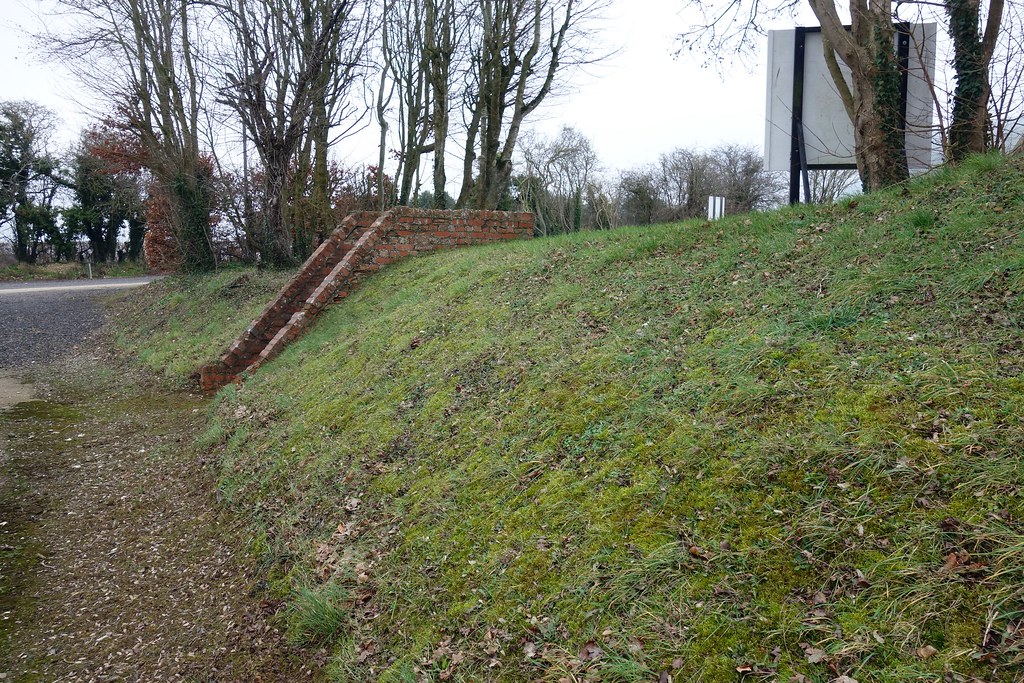 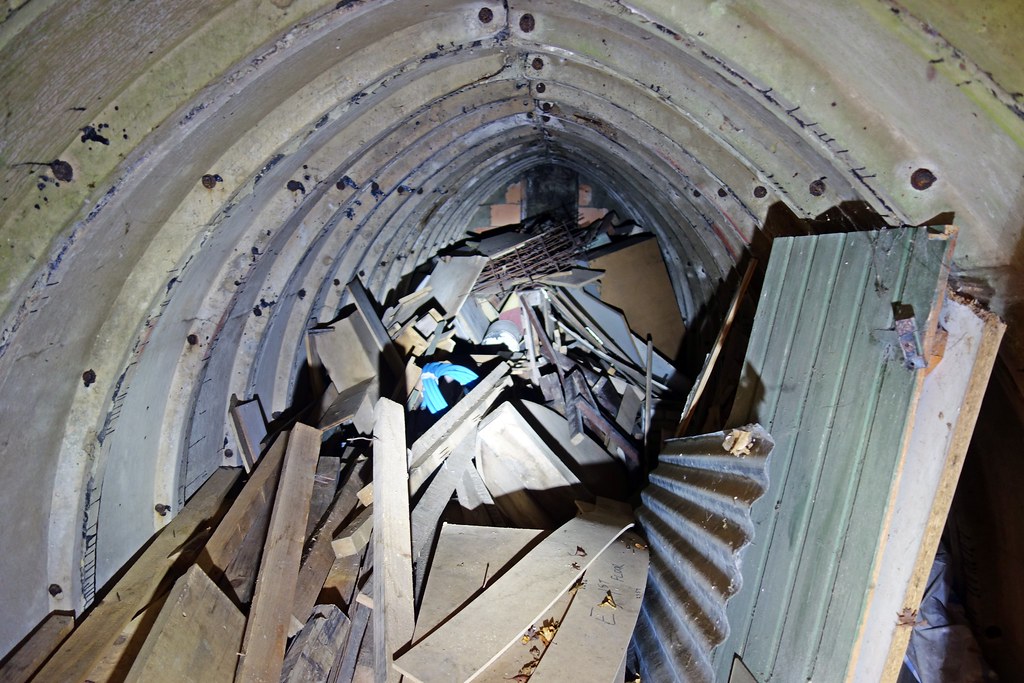 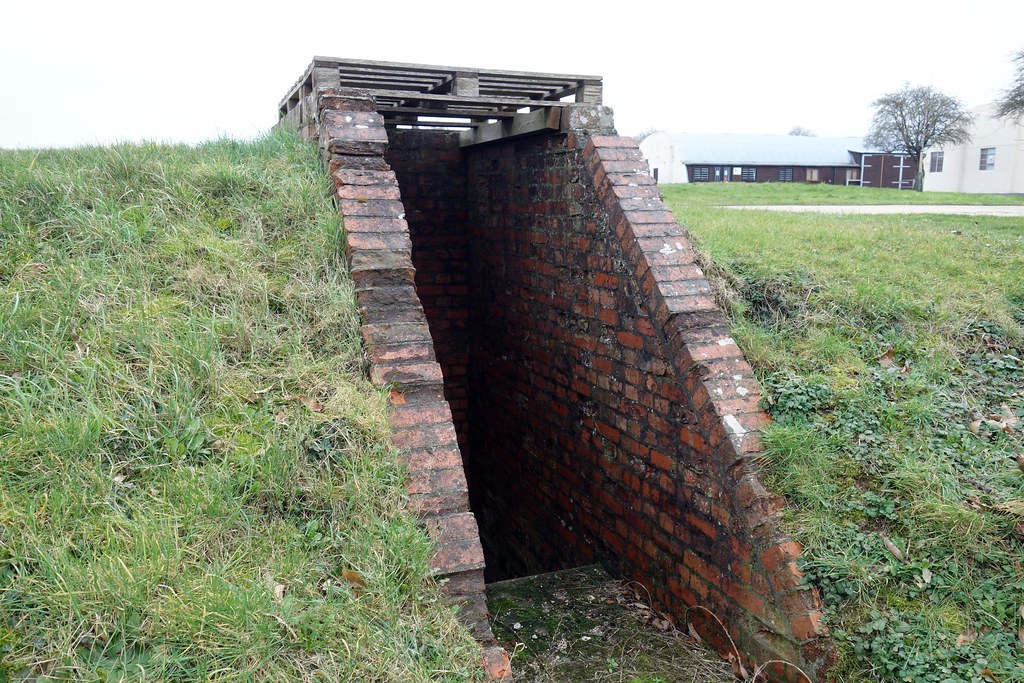 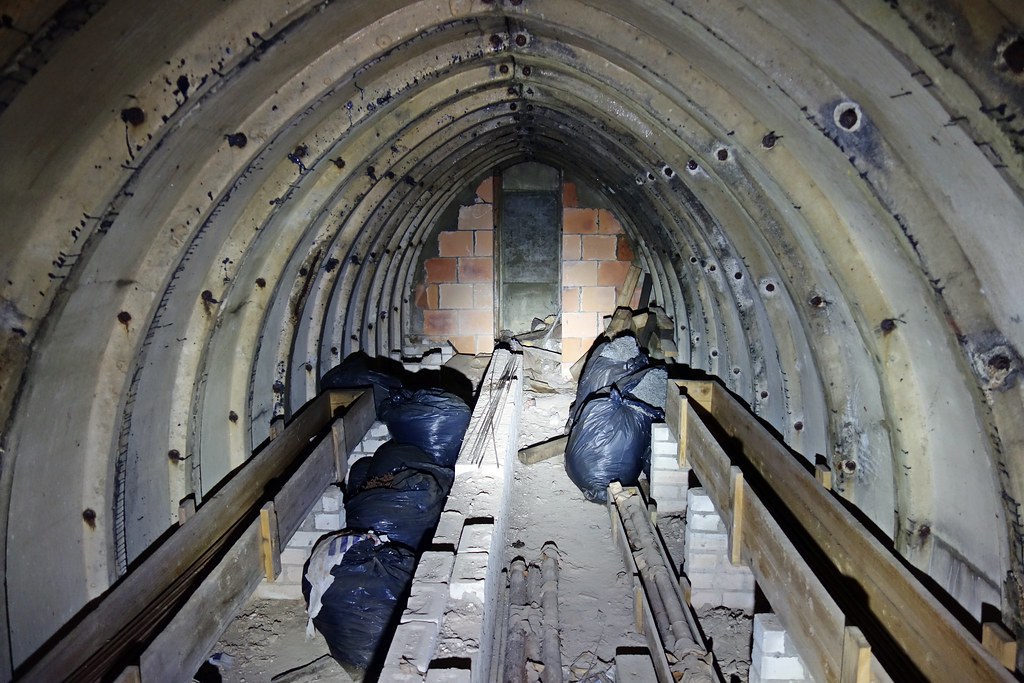 During WW2, Grovely Wood was an 25,000 ton ammunition storage depot, which stretched across from Teffont Down into Grovely Wood. Large munitions were stored in the open whilst fuses, small arms and suchlike were stored in Nissan style buildings. No sign of those Nissan huts today but a single Stanton shelter can be found. The Western Gazette newspaper reported on the December 12th 1947 that two soldiers were killed when a stack of 20lb American fragmentation bombs exploded at a bomb dump at Grovely Wood. One soldier died in Salisbury Infirmary some six hours after the explosion, and the other died instantly. They were part of a working party sent to collect salvage - pieces of paper, small bits of wood etc. There was an order that they should not to touch the explosives unless detailed to work on them, and it could not be ascertained what had caused the explosion.

Difficult to find the shelter. If only there was some sort of marker to show the way 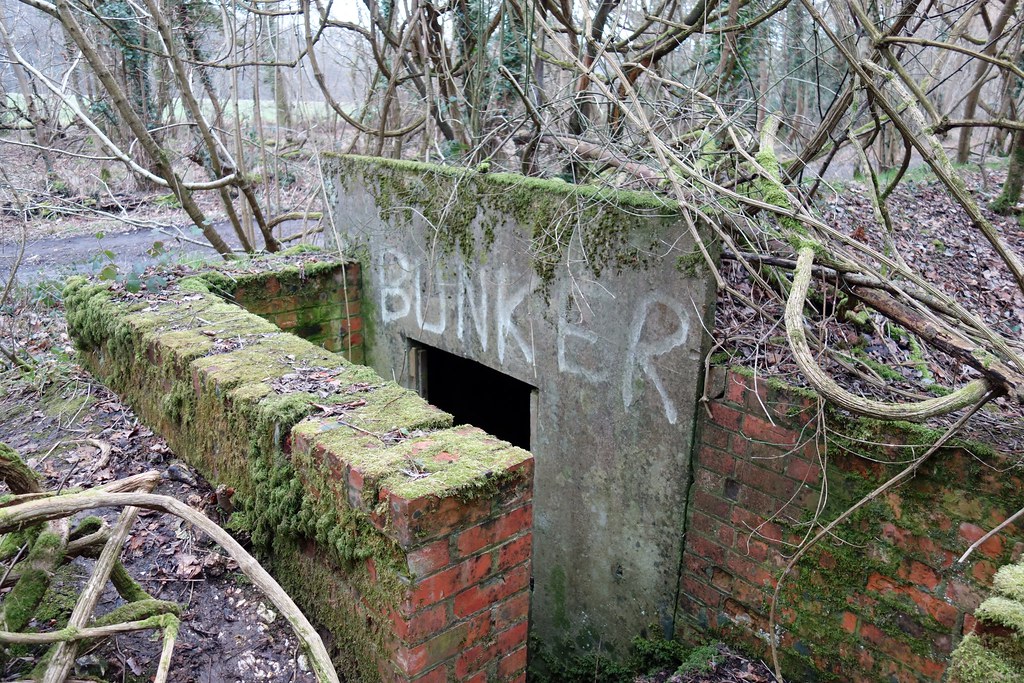 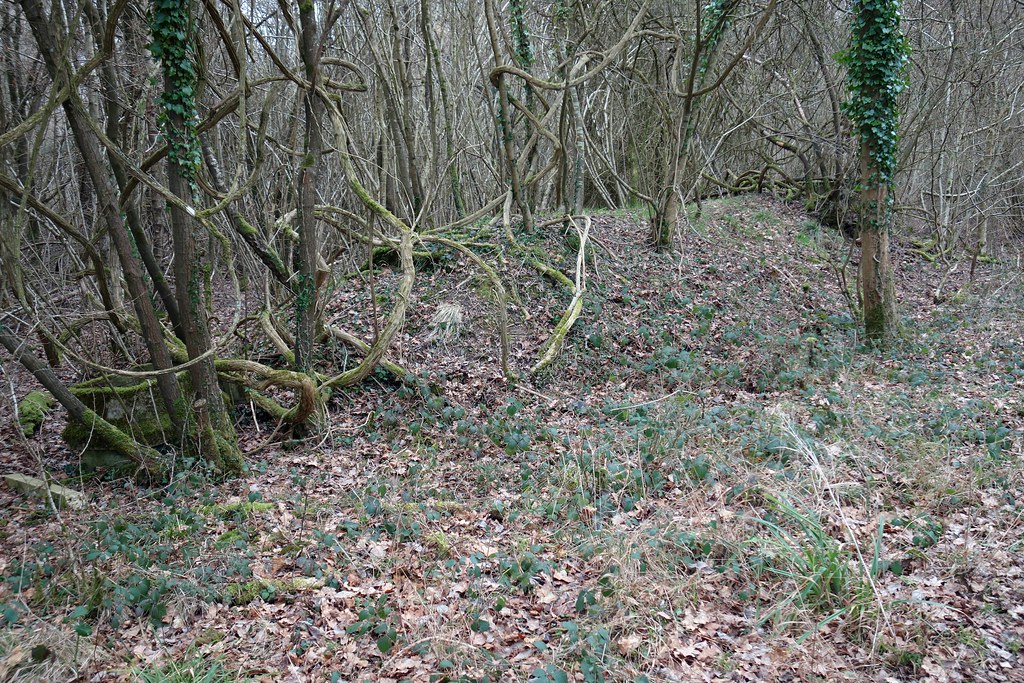 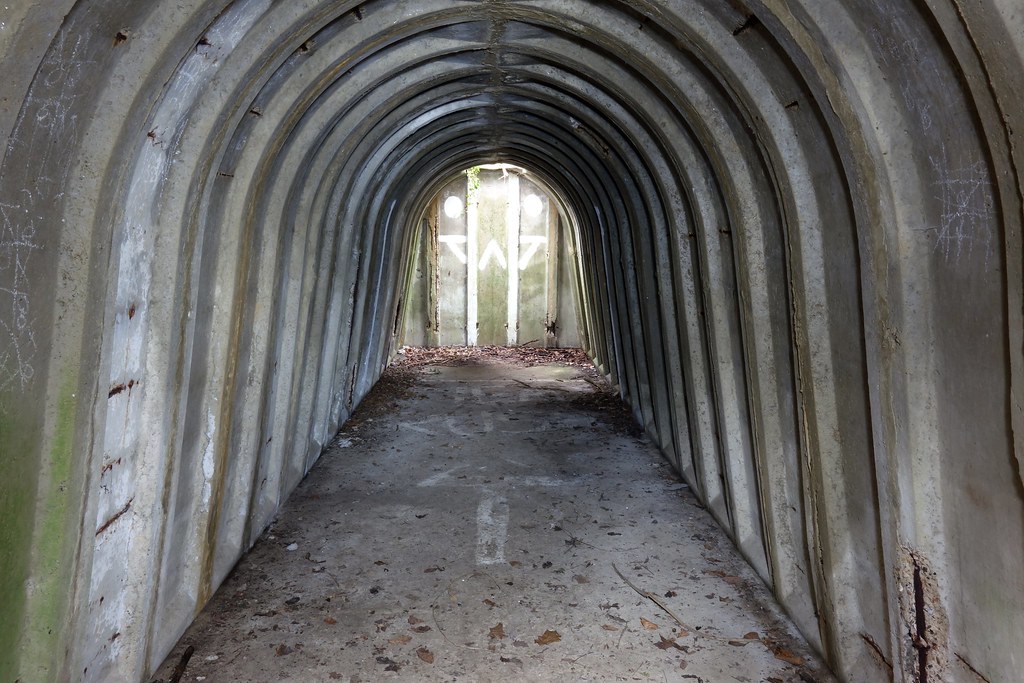 Opened on Saturday 8 August 1942, near to the site of a closed World War One airfield, this airfield was used by both the Royal Air Force and then later United States Army Air Forces. During the war it was used as a bomber and fighter airfield. After the war, it was used for experimental work before it was closed in 1959. Today the remains of the airfield are on heathland managed by the Forestry Commission. Areas of the old airfield are now designated as a flying area for model aircraft. The perimeter track is still obvious and the RAF Base Identification Code, Pundit Code letters BL can still be seen with a bit of searching.

Two Stanton Shelters can be found here, both lying on private land and both with no covering earth 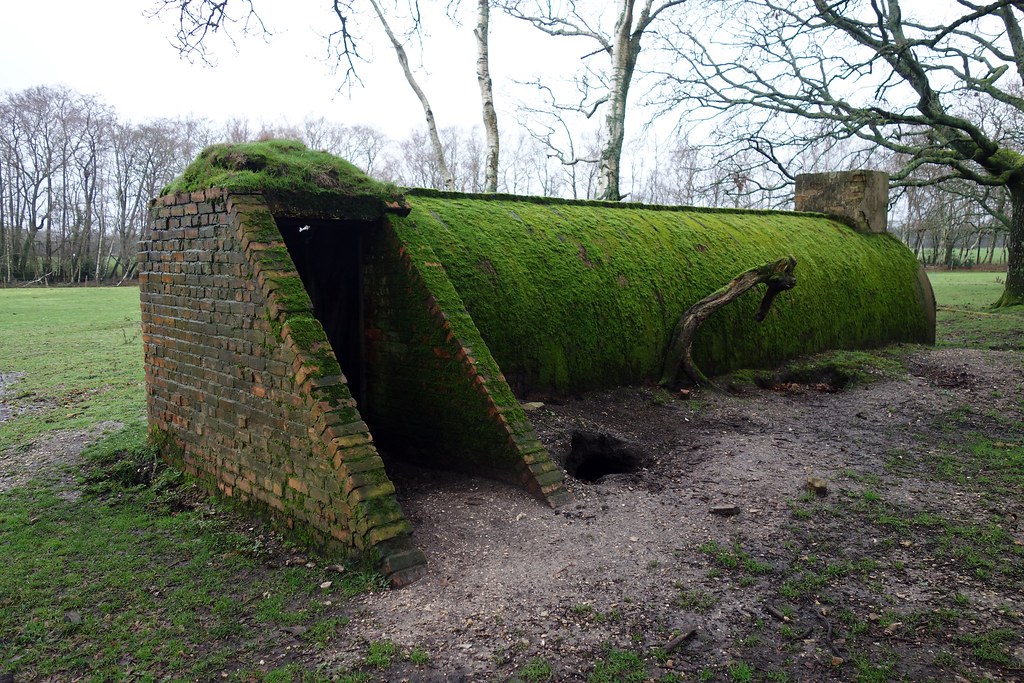 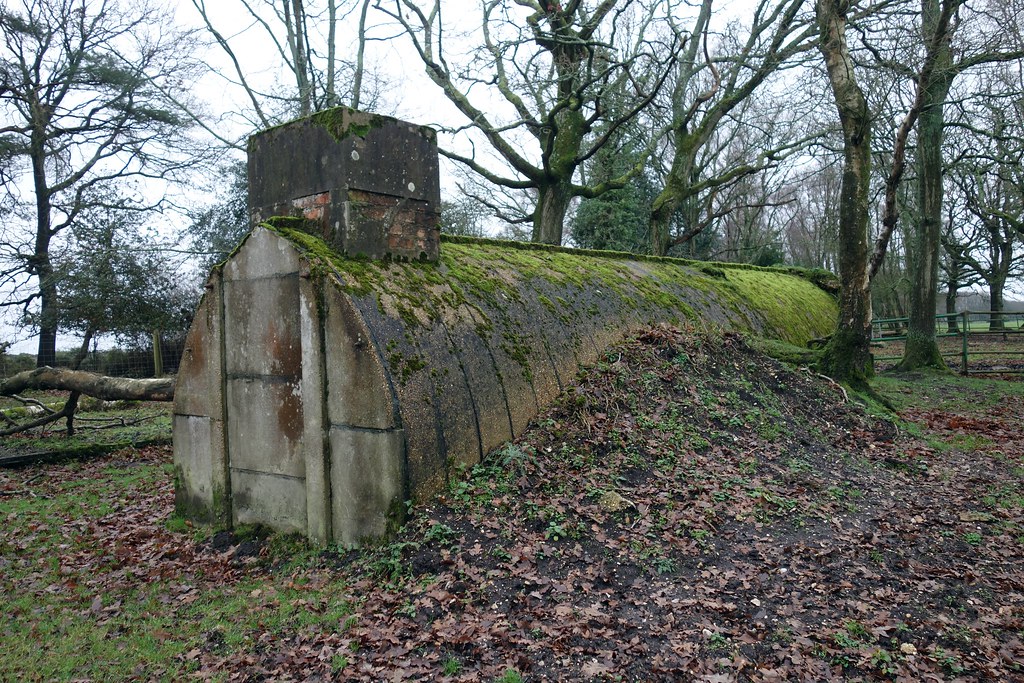 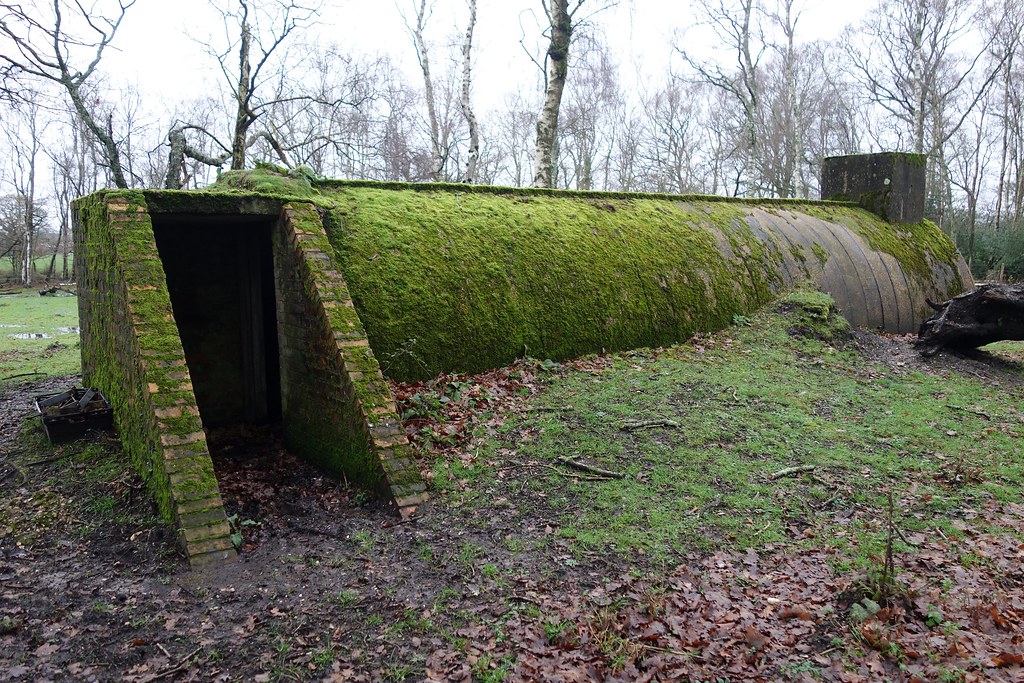 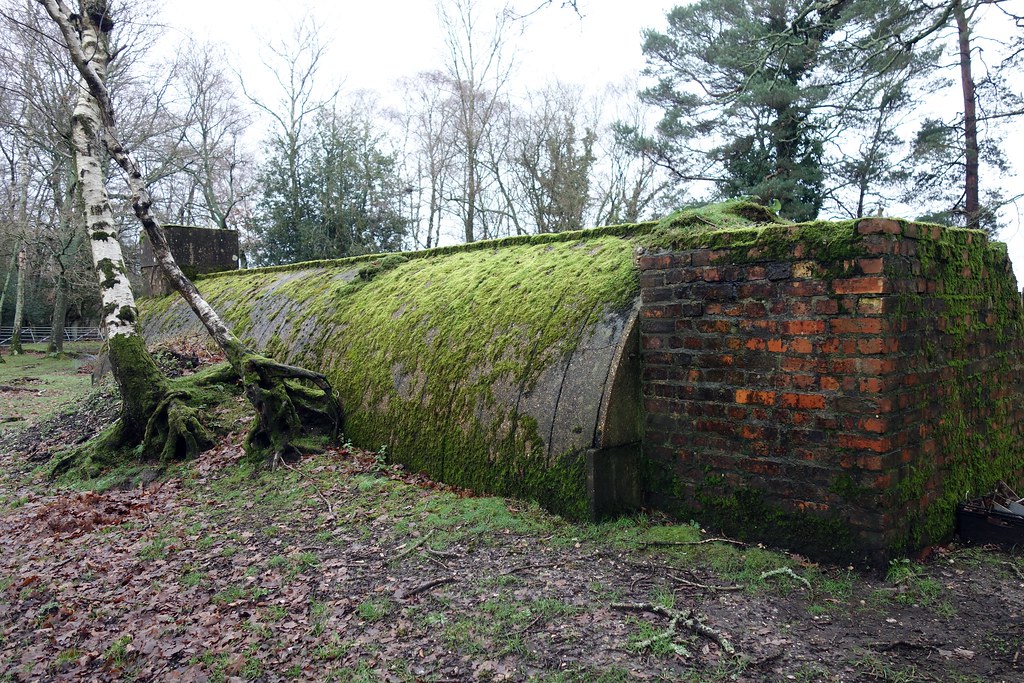 Just one interior shot, seem to remember having no torch that day - a camera-flash job 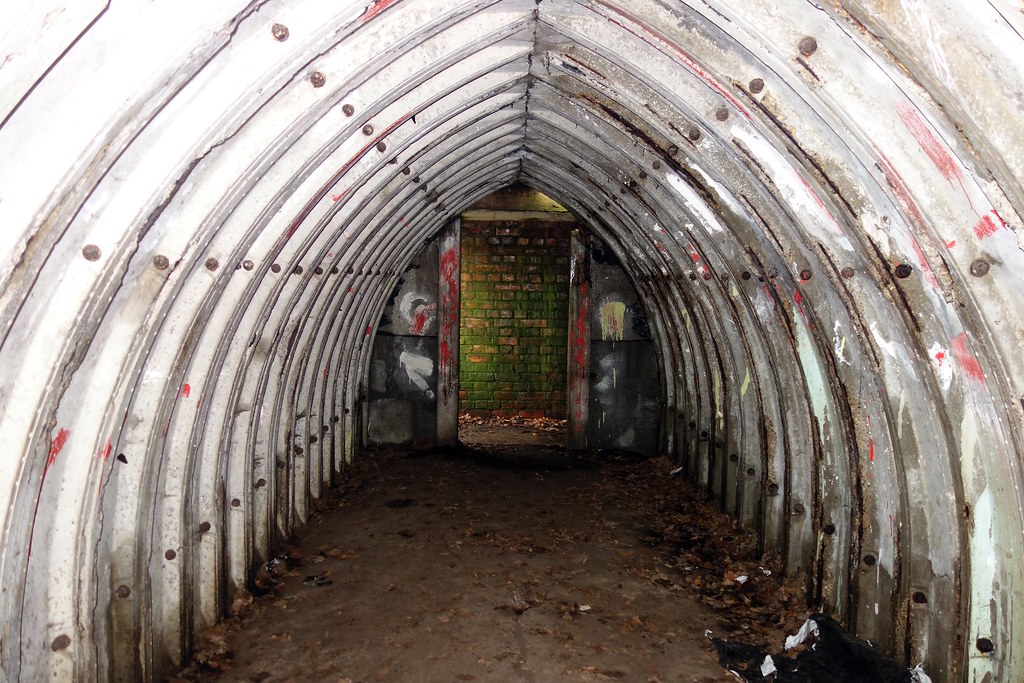 The RAF Base Identification code: 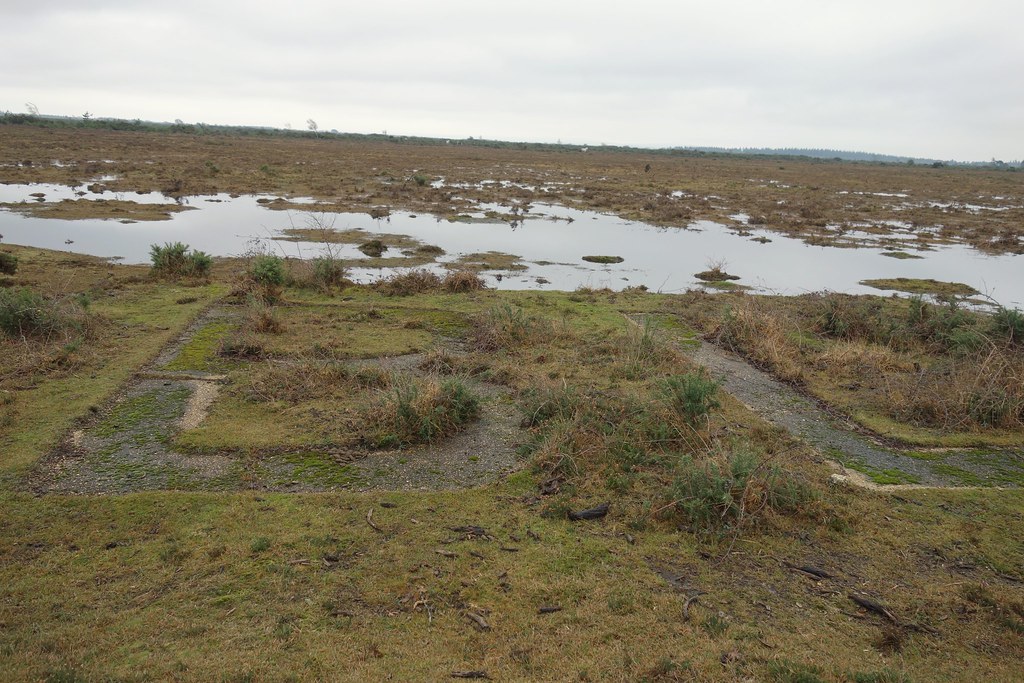 Regular User
Not boring, quite interesting. I do like the shape and the fact they are blended with nature. If I were to post my semi fails of 2020 they would be really boring lol.

Regular User
Not at all. Nothing wrong with a good bit of wholesome stanton shelter action!

During WW2, Grovely Wood was an 25,000 ton ammunition storage depot, which stretched across from Teffont Down into Grovely Wood. Large munitions were stored in the open whilst fuses, small arms and suchlike were stored in Nissan style buildings.
Click to expand...

Field storage depots used Corrugated Iron 21 piece IG Shelters to protect ammunition from the elements rather then from blast.
Some IG Shelters had end screens made of canvas or wood.

I posted some pictures here:

Some AuxUnit Hides used the same sections.
We are all part of History - Only difference is we are still living our bit.