Regular User
The lads and I had a bit of a get together in Bradford this weekend. Myself and Six, Turkey, Speed, Ojay and Squirrel had a good old knees up with the usual skinful and curried meal, but we did find time to have a bit of a poke about in Wool Country. Sadly with the dire need for greasy food in the morning, and ever worsening weather I didn't get quite as much time for derping as I would have liked, but did manage to take in two fetid pits before the slip 'n slide home.

No history on either, if anyone can assist in that dept I'd be most interested.

The first looks more like a church than a mill, but once inside it is clear to see the building's former industrial layout.
Looks like it was last used as an antiques warehouse as there is much interesting tat rotting away in there, however despite the decay there are some typical wool mill features remaining. This place is a death trap, the floors are terrible. Bear in mind you could die here if you intend to visit.

Note the small cut glass panels in the skylig 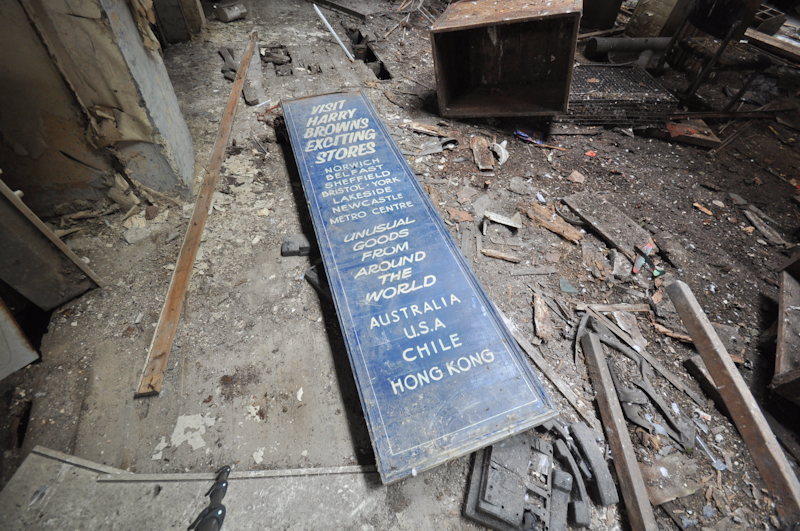 The typical built in cupboards one usually finds in a mill office, probably used to store ledgers in originally. I thought the doors were a nice unusual design. The doors to the office itself matched.

Derp number two... One of a long terrace of former wool mills. This one was last used a s a cash and carry, and is again a fetid pit of despair inside. It too is a rotten death trap, and despite it's size held very little of interest.

The most notable feature of the place was this very unusual lift, complete with wood paneling and little bench seat!

Original stenciling on the staircase

That's all folks, keep mooching and something good will eventually turn up!​

Staff member
Admin
Came out all right them, as you know I couldn't be bothered with anything other than phone pics

It always amazes me when people come on here asking for stuff to do and you can literally go to ANY Town/City and actually find stuff to do if you step away from the keyboard!

I wonder if the Police are still looking for @Speed

28DL Full Member
I love Bradford always something there if your prepared to wander around as you have done. That Harry Brown sign looked interesting at first glance until i saw the list of outlets which included the Metro Centre making it fairly recent. Good work and thanks for posting.

28DL Full Member
They may be fetid, but mills rule in my world, I've never actually been around Bradford before, may need to get my arse over there. Good set of pictures them chap, ya can't beat a good bit of wood paneling in a lift!
Thanks for sharing!

Regular User
Personally I'd be delighted to find places with that much left..the staircase spindles/balusters in derp 2 are rather fine.

Regular User
I agree with most i really like places like this to be honest…so whats the score with speed and the old bill.

dweeb said:
He jumped in derp three and overheard people on the street that plod had been called so he left from the back door lol
Click to expand...

Excellent, i need to back over here i have some mills i need to check out too, might have a looksy at these too.

Regular User
Nothing seems to have changed on murder mile. Crabtree still standing but it's had another fire. H Hey totally demolished

Need more time over that way, more to find for sure.

Regular User
Great stuff, really like places such as these. Always something worth shooting in them if you look hard enough.
I'm not from Birmingham.
I don't know where 'Hunters House' is.​