Calamity Jane said:
Cracking set. Really enjoyed this. That dome is great. But this is my fav, the shadow and angle, just hit the spot for me.
Click to expand...

8mm said:
Sadly the digger is probably not an innocent bystander! Planning for housing development was applied for some time back but it seems to have been withdrawn. I heard somewhere it was listed, but can't find it on the register, so maybe they are planning to do some "safety works" and then it will become a vacant plot.

Regular User
Awesome! Checked this out a couple of times myself not for a few months now and last time it was busy as hell.
Looks like i’ll have to be quick.

28DL Member
it is for sale as a plot

UrbandonedTeam said:
With a completely free weekend for the first time in god knows how long, I was desperate to get out for at least a few hours. After two consecutive plans had to be cancelled due to surprise work shifts, I made use of the spare afternoon I ended up with on Sunday to visit this local spot, which is one I'd tried numerously in the past few years. 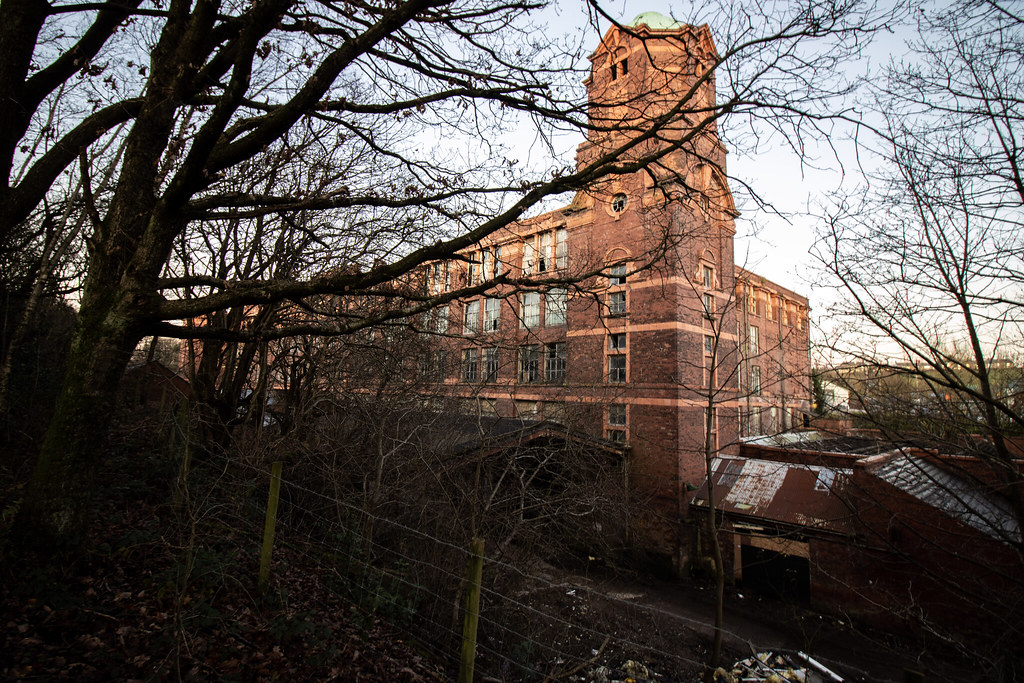 The Edwardian site dates back to 1906 when it was first opened as a cotton mill, but it was later used for the production of spiral wound paper tubes. It employed over a thousand in it's day but more recently it was partly closed and used by some small companies, who seemed to neglect the upper two floors, which are in the worse state of all.

When I visited the property last, about a year ago, it was still being used by said companies. The main business appeared to be a car scrapping scheme, which led there to be a vast amount of rusting cars sat around the mill. I knew from someone that there was a snooker club held inside the site as well, in a small space towards the front of the building. However, during the visit yesterday, I quickly realised that every once had finally packed up shop and left the structure for good, which is no surprise, because it seems like it has been unsafe for a long time. Along the top floor specifically, you can see collapses that have happened, and more worryingly, bits of bricks that look like they are destined to fall at any moment. 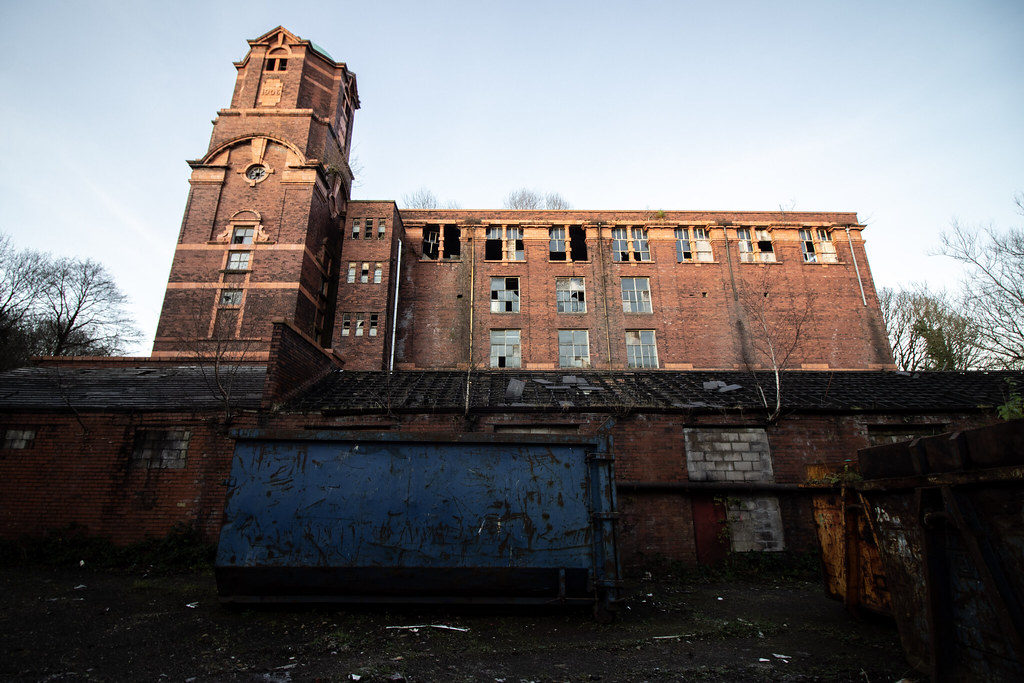 I hadn't done a solo exploration for a while, so although it was a large mill with one petty guard trying to escape the cold, the adrenaline was still there. Firstly, I headed into the engine house, which hasn't changed at all since Dweeb's report ( https://www.28dayslater.co.uk/threads/cowling-mill-engine-house-chorley-march-2015.95114/ ). The ruined hall still has some points of interest, like the gantry crane that was swaying in the Winter winds. Obviously, in the likes of this property, some sections have been vacant for a lot longer than others, and the engine house is a prime example, because trees have had enough time to grow inside the structure. Either way, it was still very impressive to see in person. 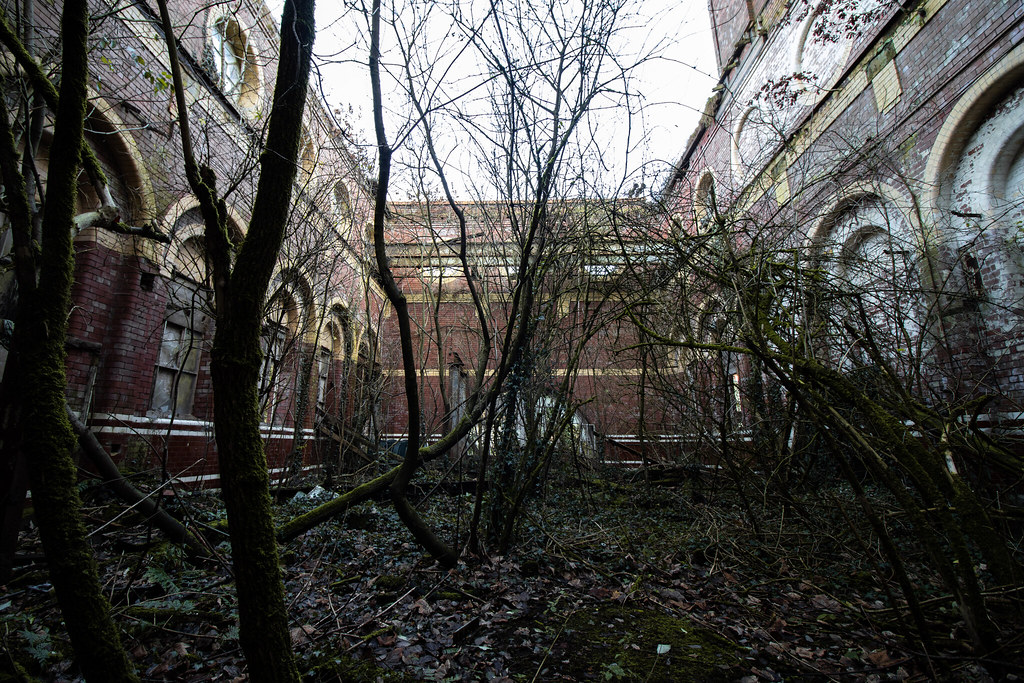 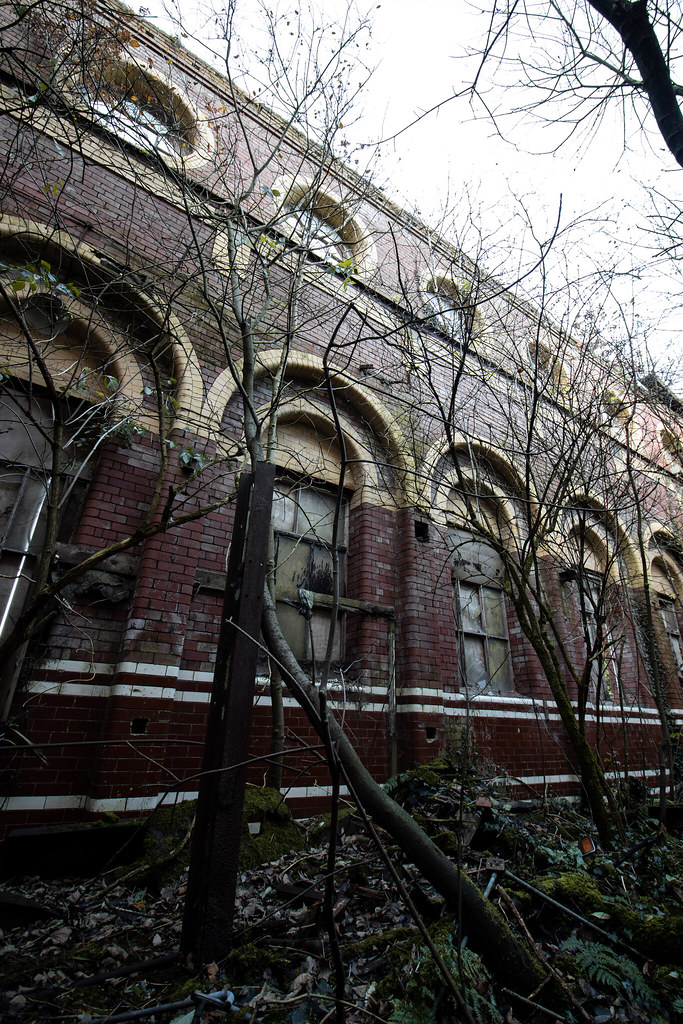 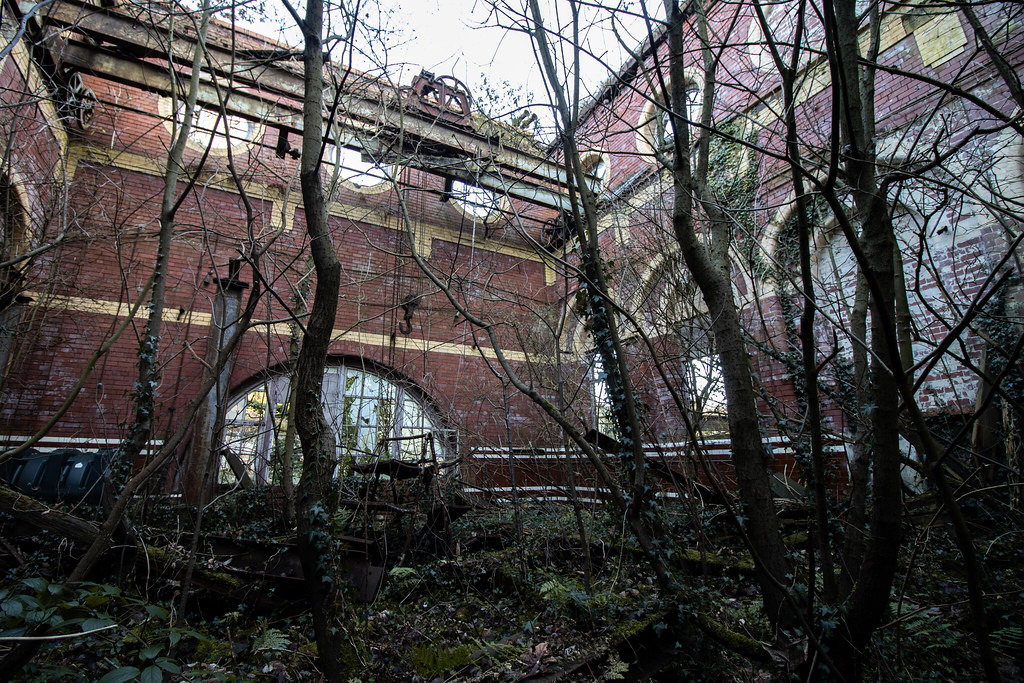 A toppled tree, showing the length of abandonment 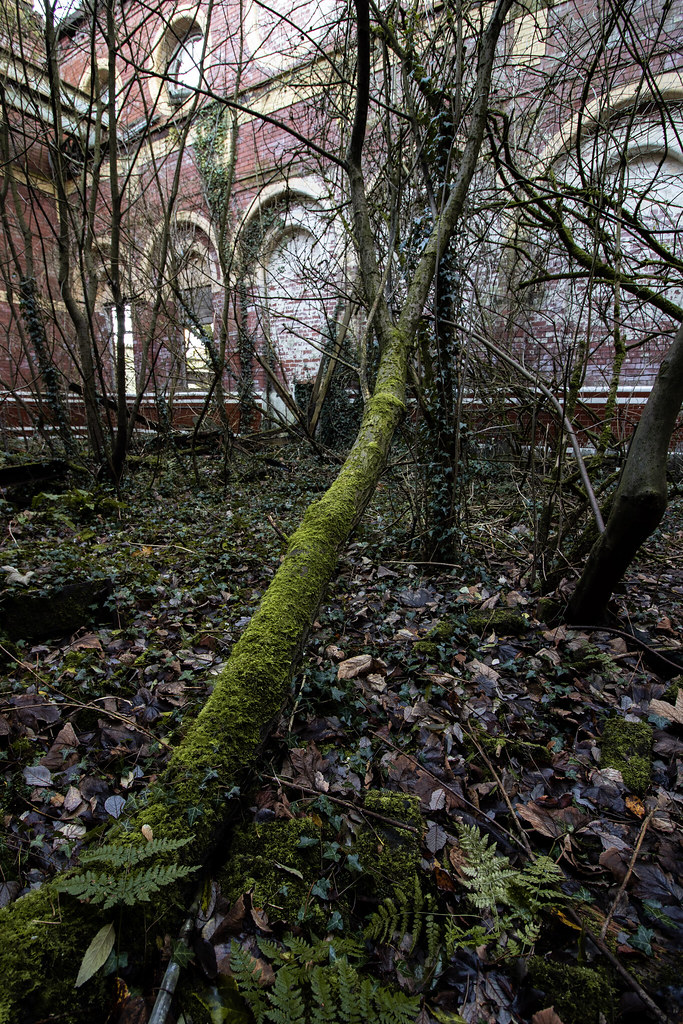 Close up of the crane's hook 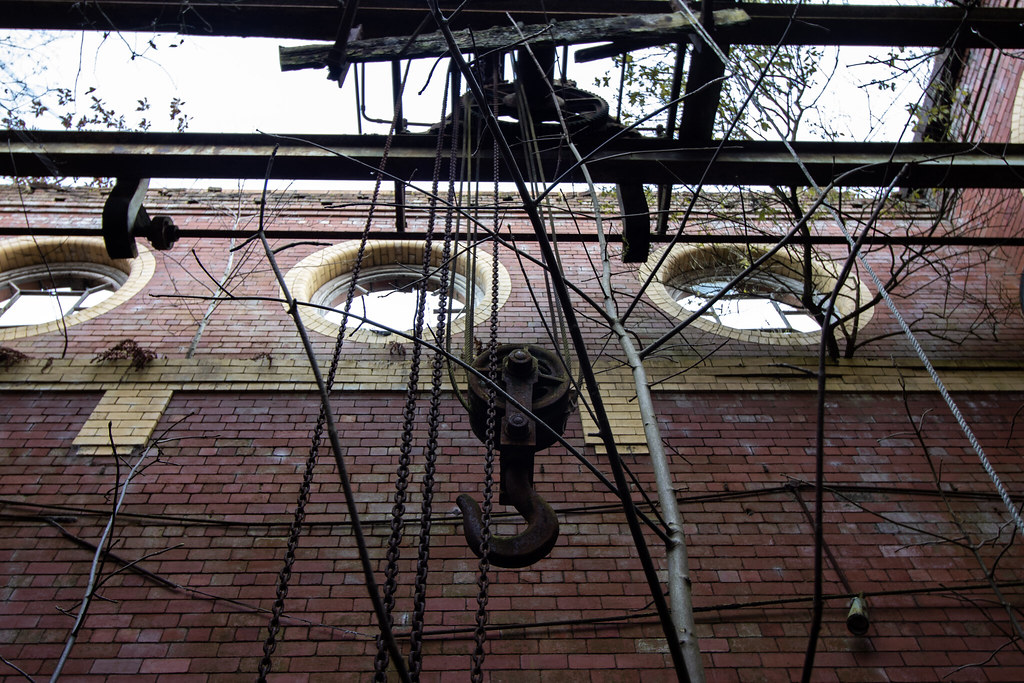 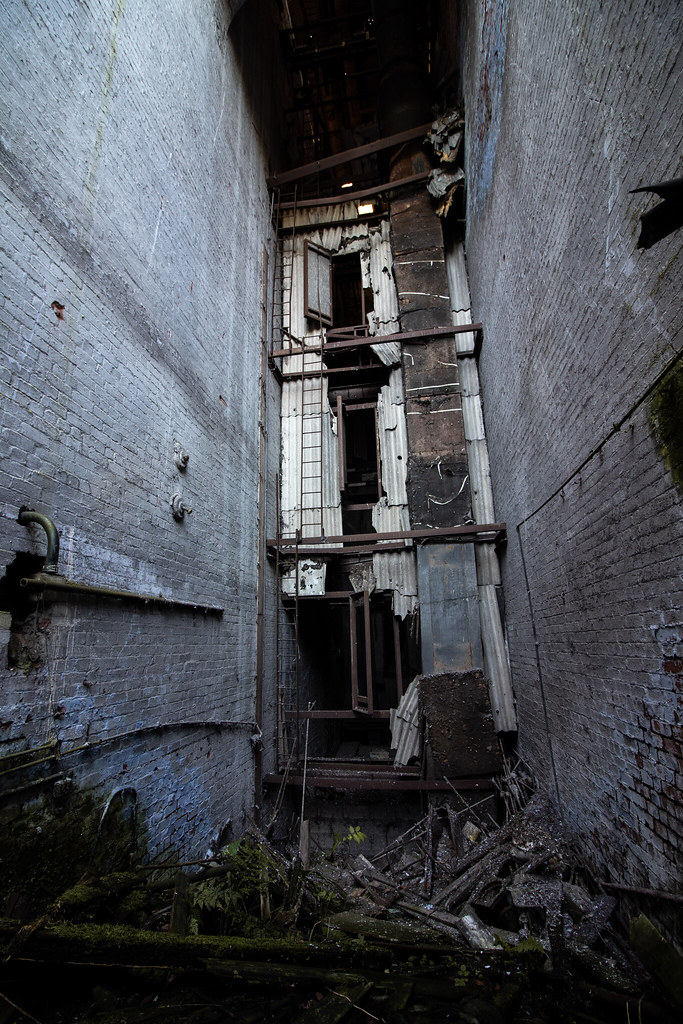 Looking along the stream beside the mill 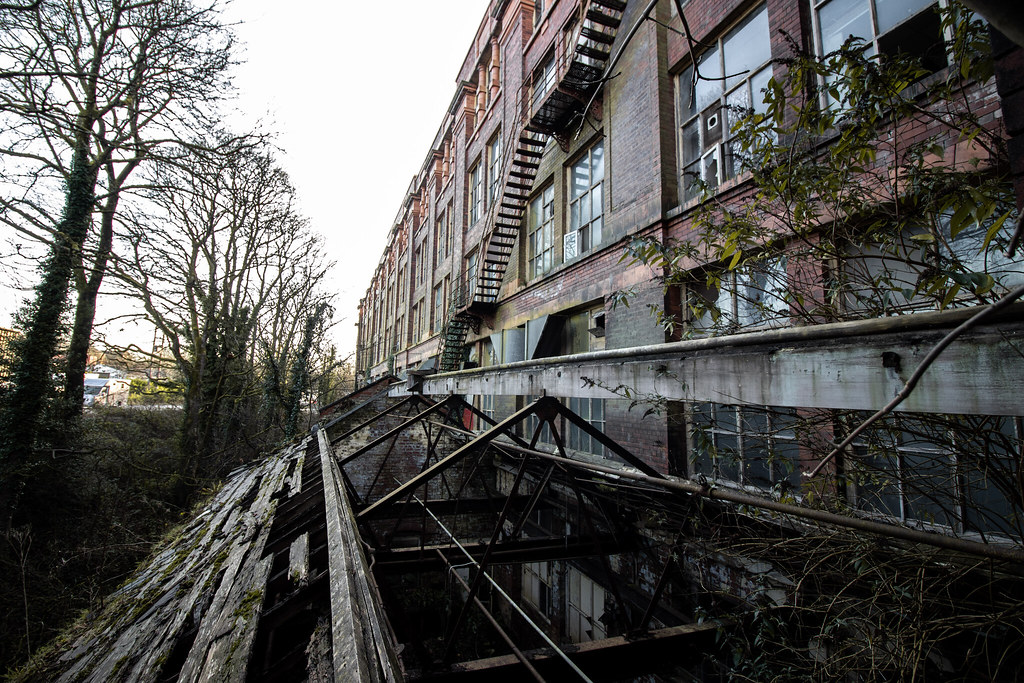 Back outside, around the corner from the engine house I see something that made me very worried. I strongly hope that the digger with 'Demolition' printed on it's rear was here for a smaller outer building, or maybe just the cars that had vanished, but I'm unsure. Luckily, nothing too destructive had occurred on the building yet, but I can't believe such a characteristic example of 20th century architecture would be knocked down. 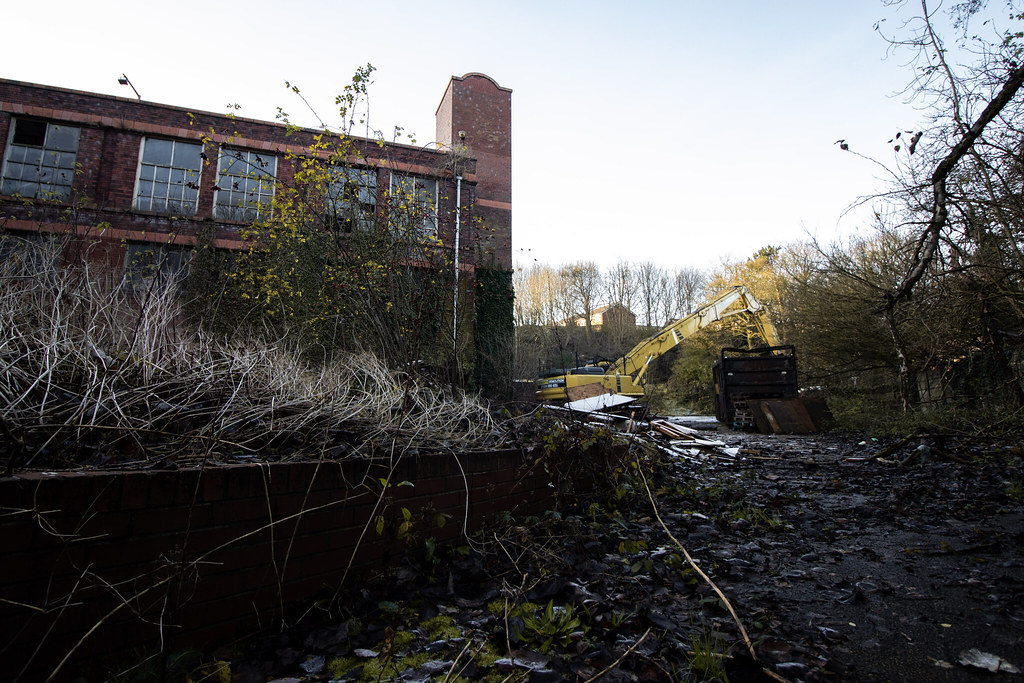 Entering the mill itself took a bit more thinking. Being alone, I wasn't going to risk any excessive climbing but I guess instinct took over, and in a few minutes I was in. On the lowest floor, the building had been partitioned with seemingly fresh cinderblock walls whether for a failed development or an unfinished project I don't know, but it wasn't very photogenic. The old sign for the 'Snooker Club' remained but without much else to follow it. It was only when I reached the second floor that I opened my bag. 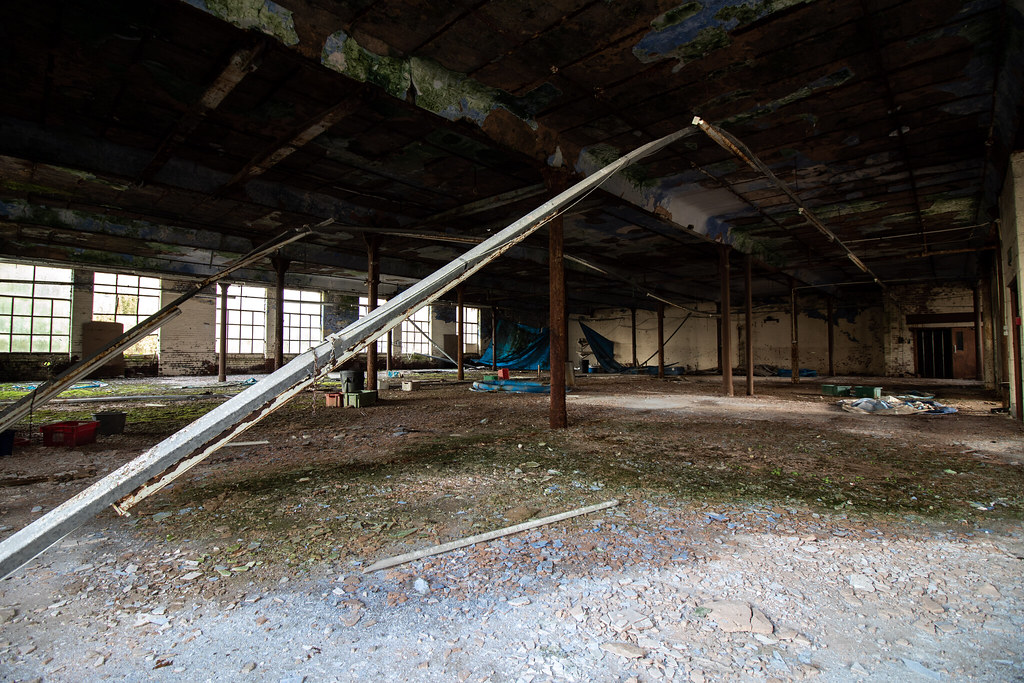 The decay contrasts quite highly in the building, which leads me to believe that some parts of the mill have been abandoned much longer than others. 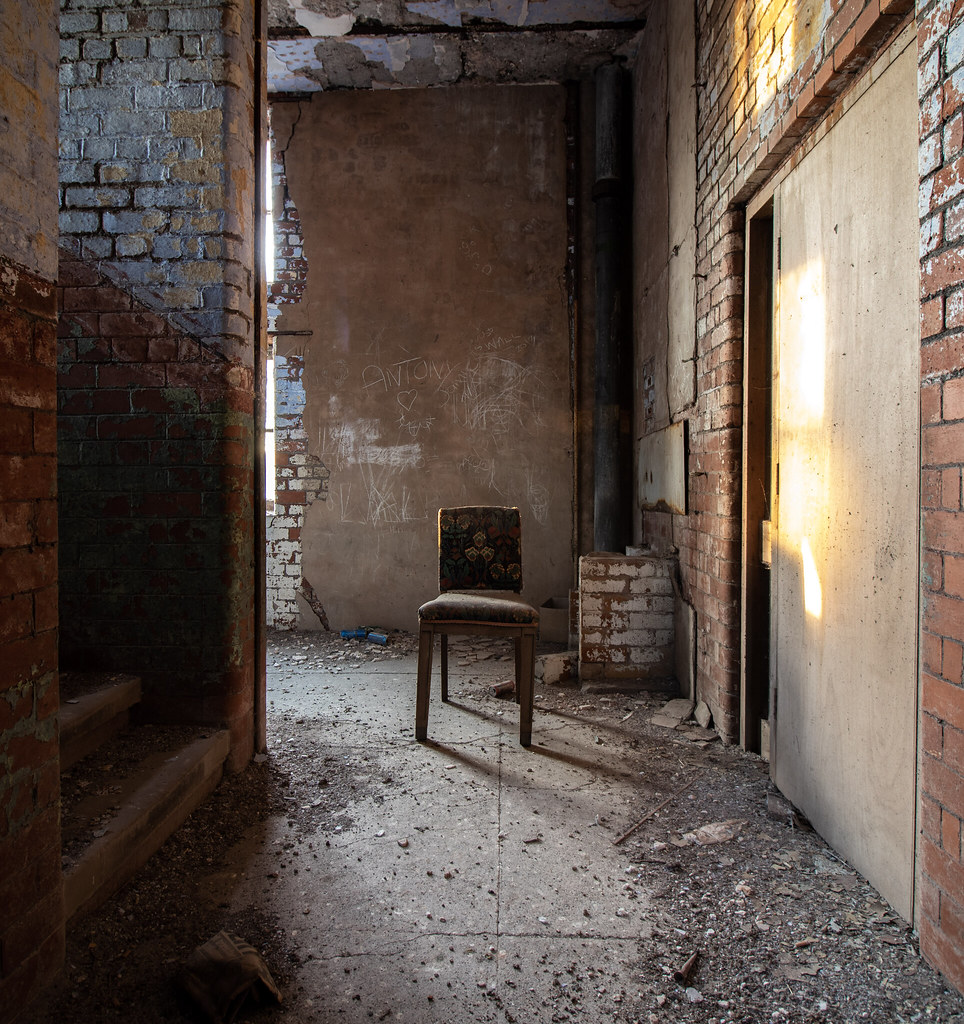 The opposite side of the mill to the shot shown prior. If you look closely you can see the guard in his van, enjoying the warmth. I don't blame him! 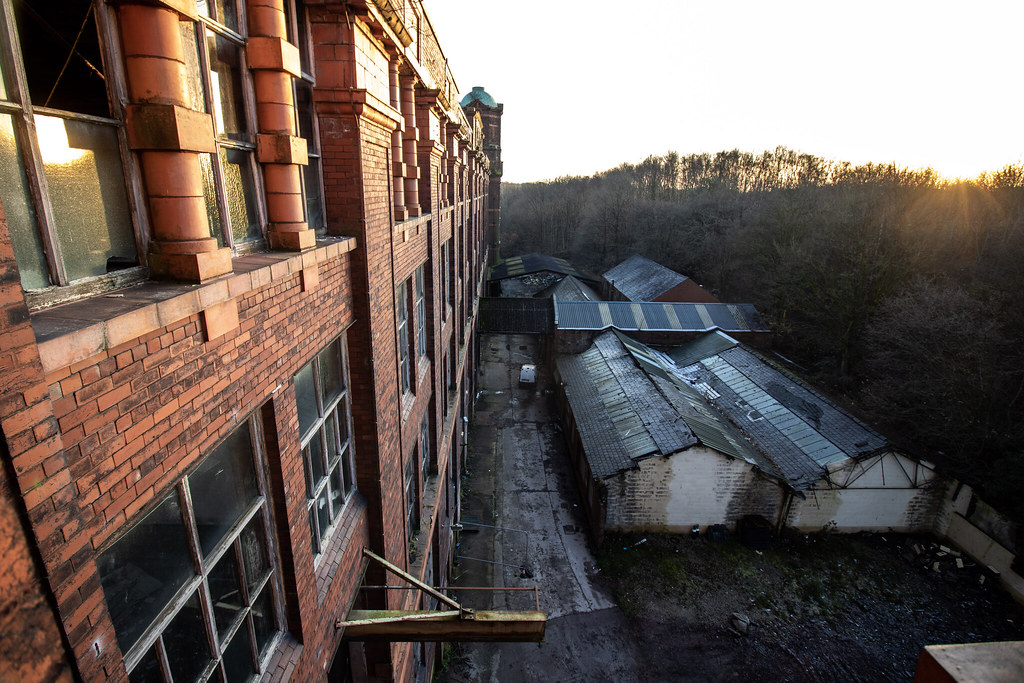 All three floors were fairly identical. The only differences were more modern alterations presumably for offices. On the 3rd and 4th floor, you might notice the array of paddling pools dotted about, which had been blown up to collect the surging rain water. Some had been there for years with miniature pond environments inside them. 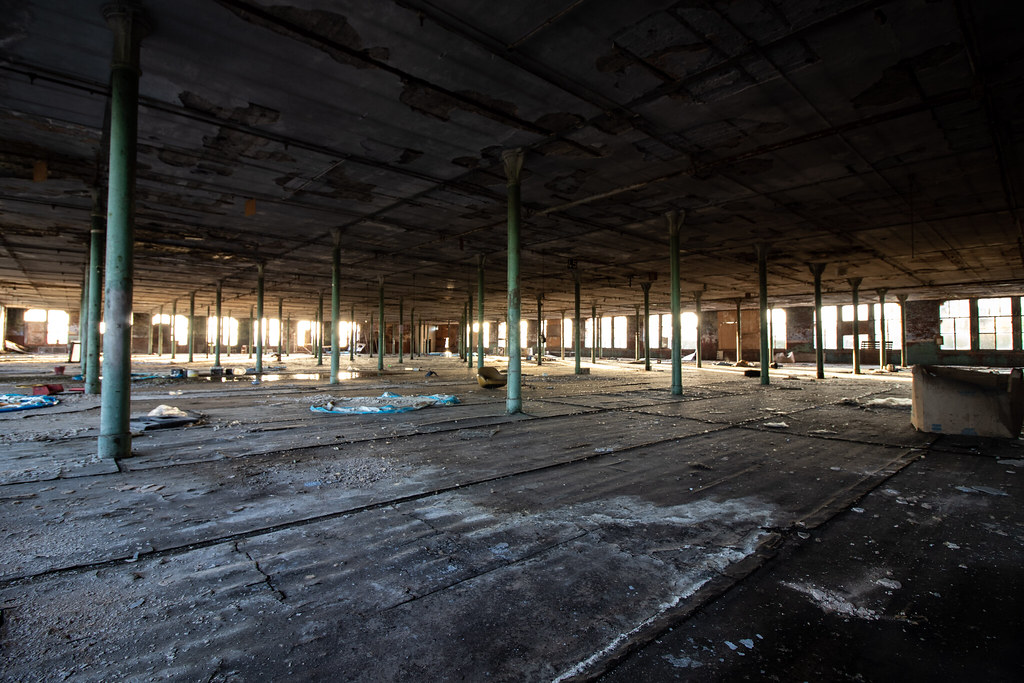 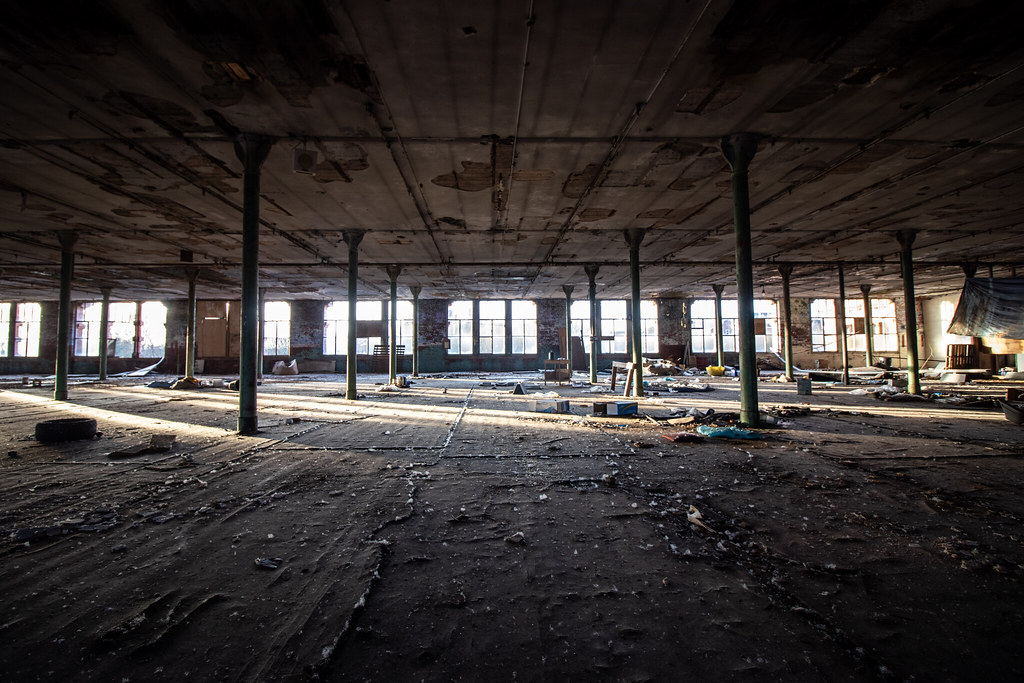 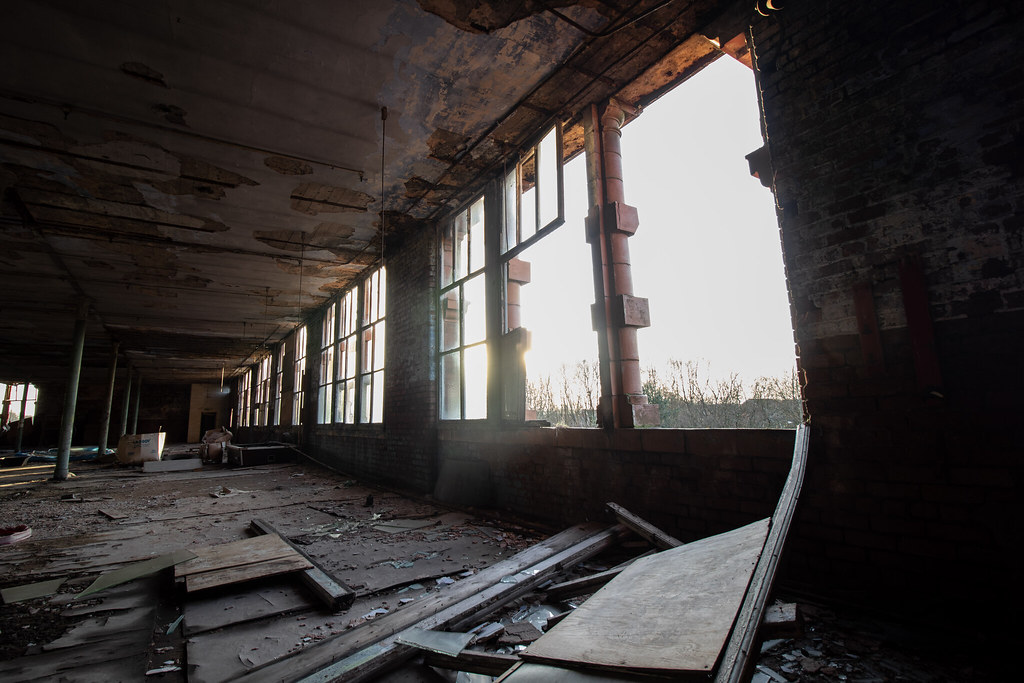 It appeared that a tyre company owned half of the top floor, with quite a good deal of equipment and furniture left behind. 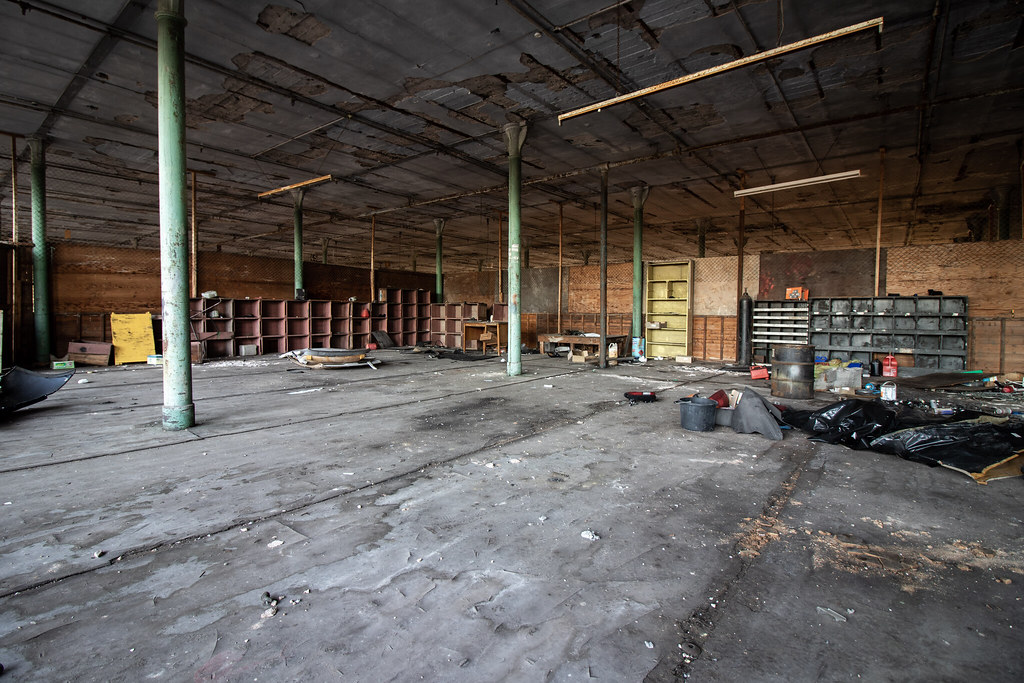 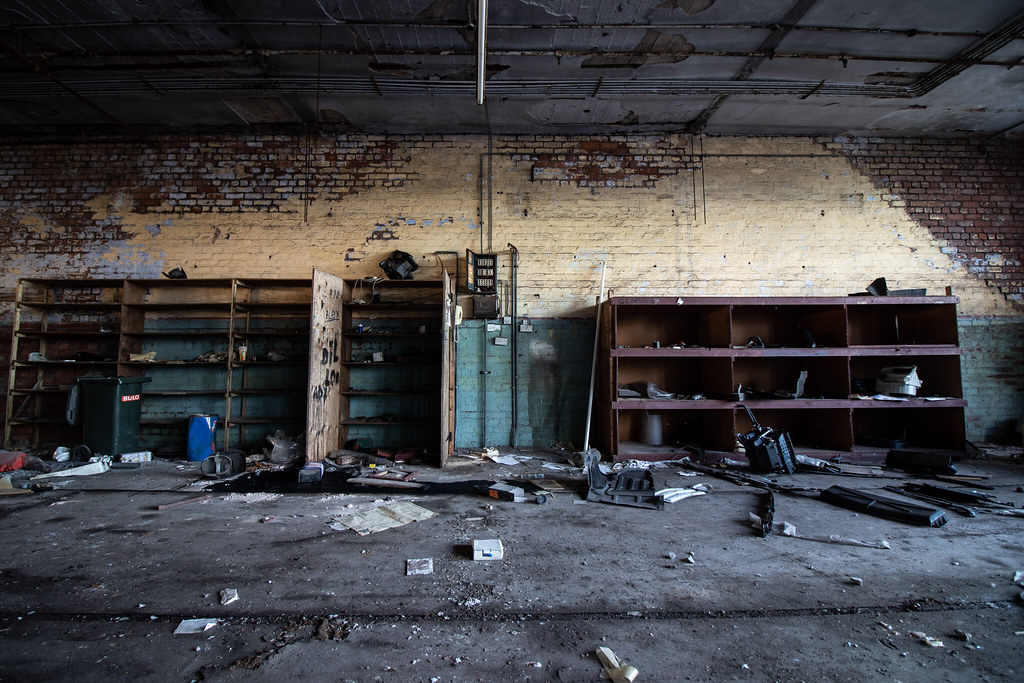 The sun was progressively setting, so I decided to make my way up to the roof, and hoped to see inside one of the two domes. 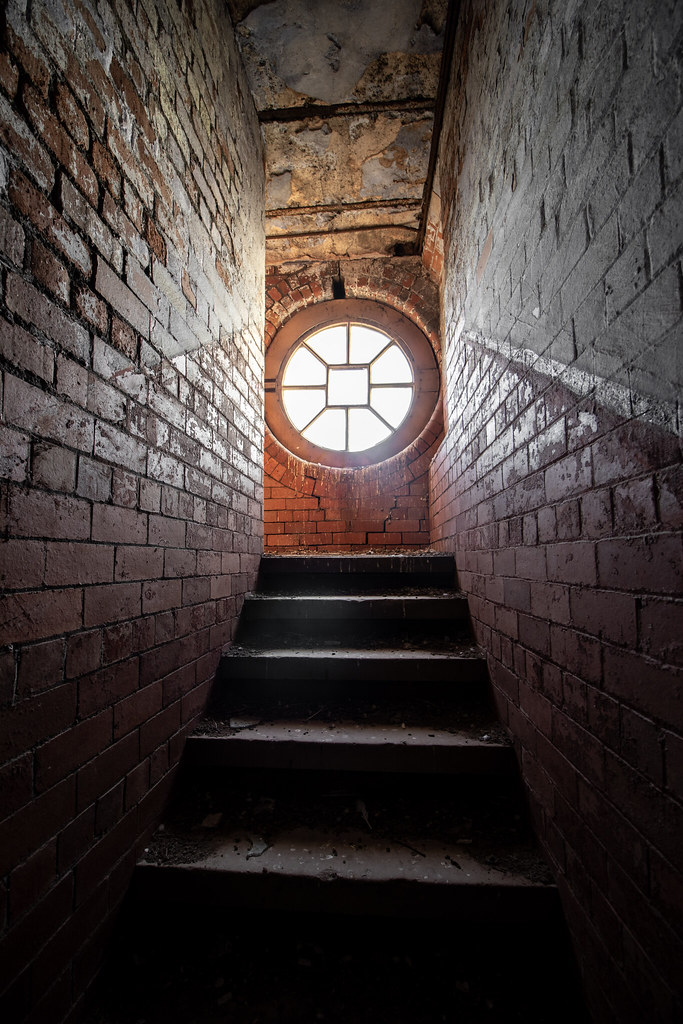 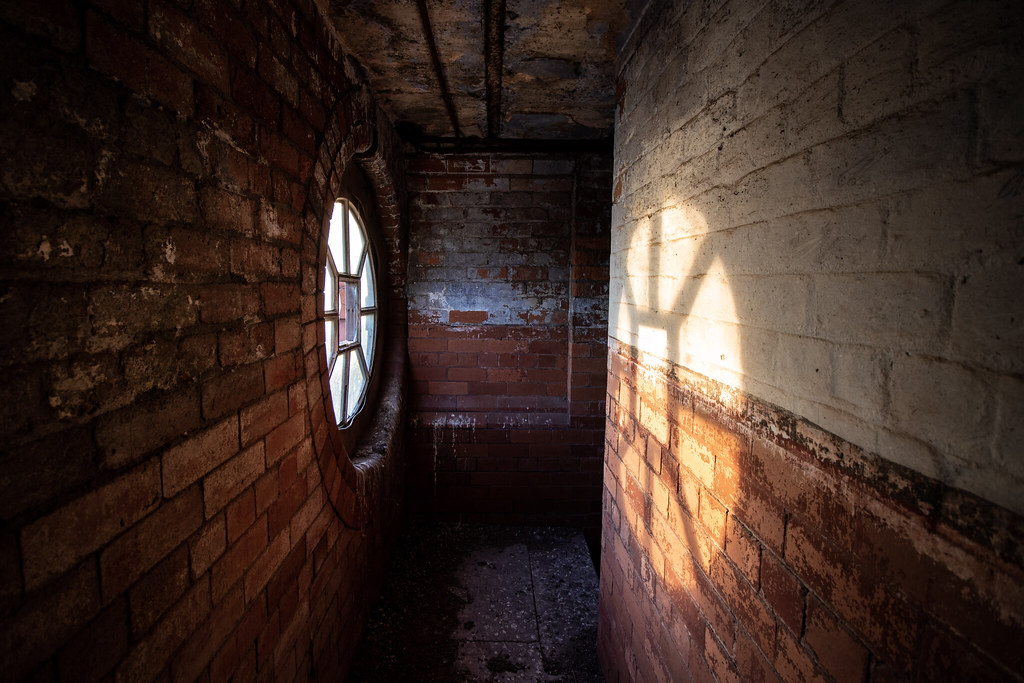 This single ladder would take me to the highest point of the dome. When I reached the top there was nowhere to stand, so I was forced to balance on the ladder to try and capture the details inside. The brickwork was incredible, to create the curvature. 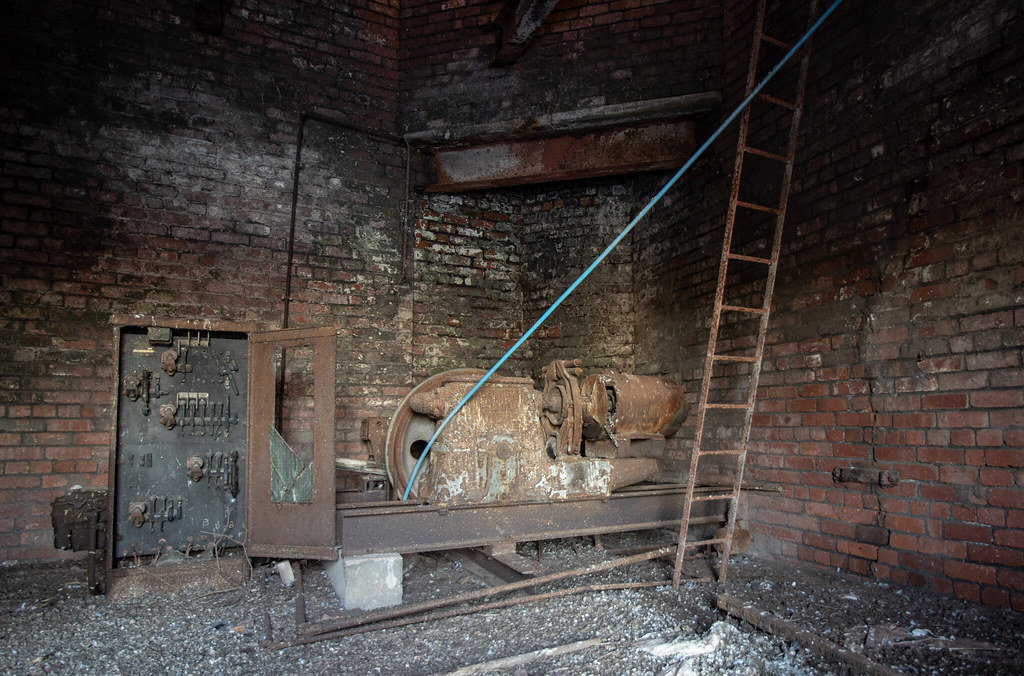 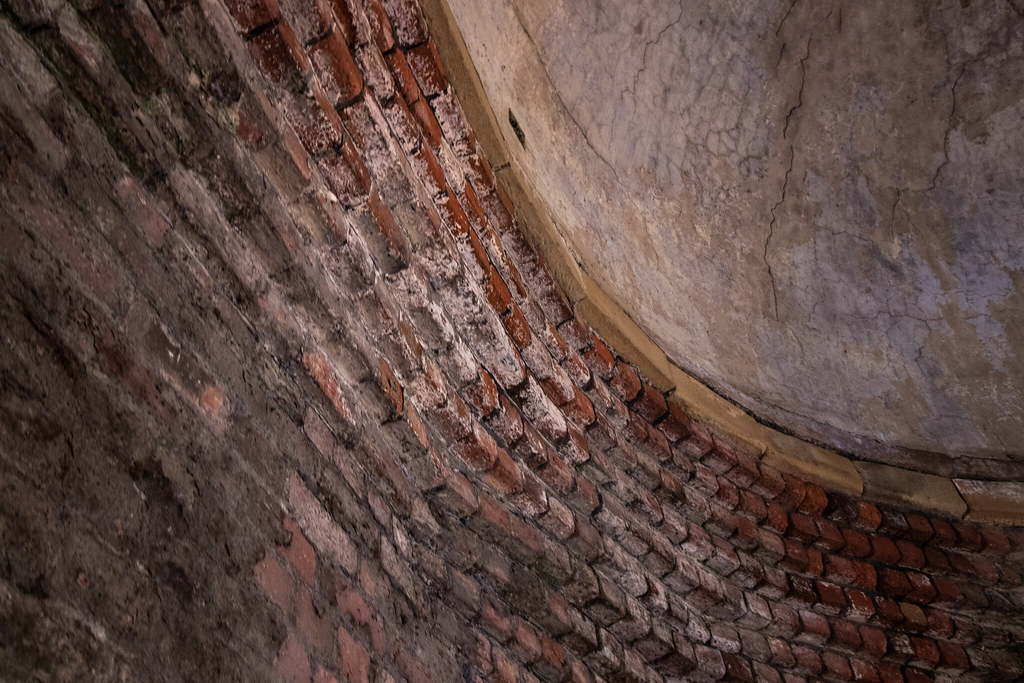 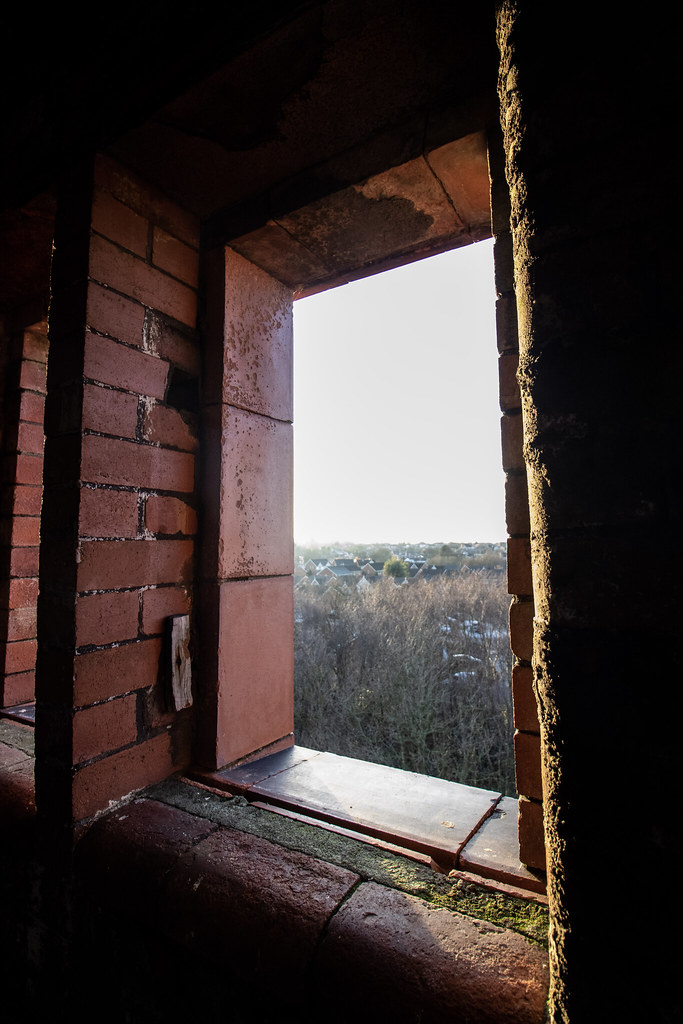 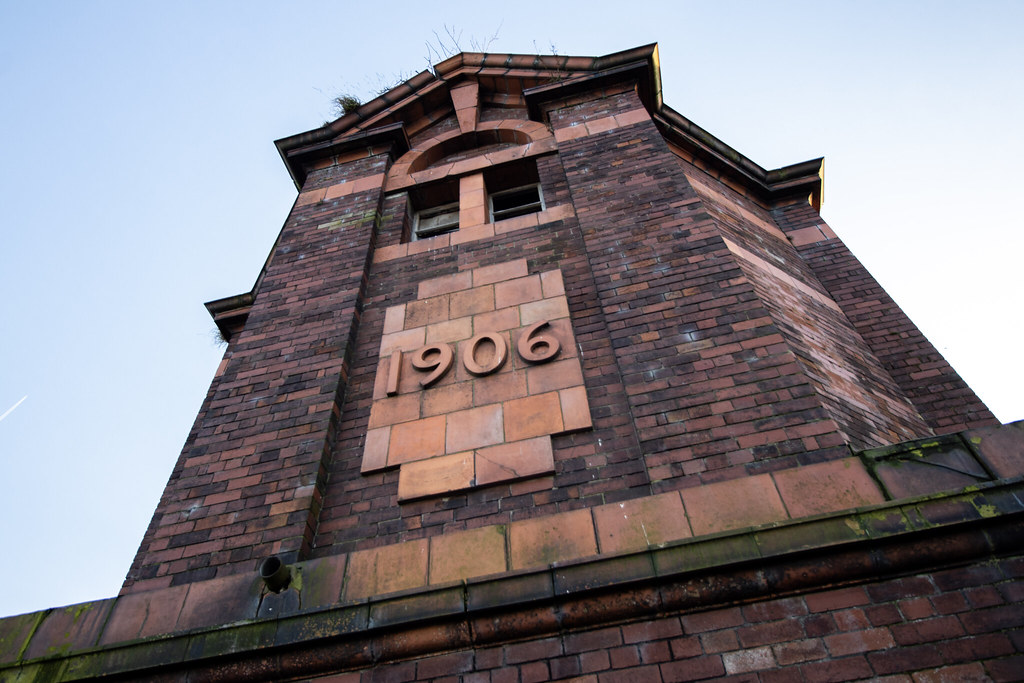 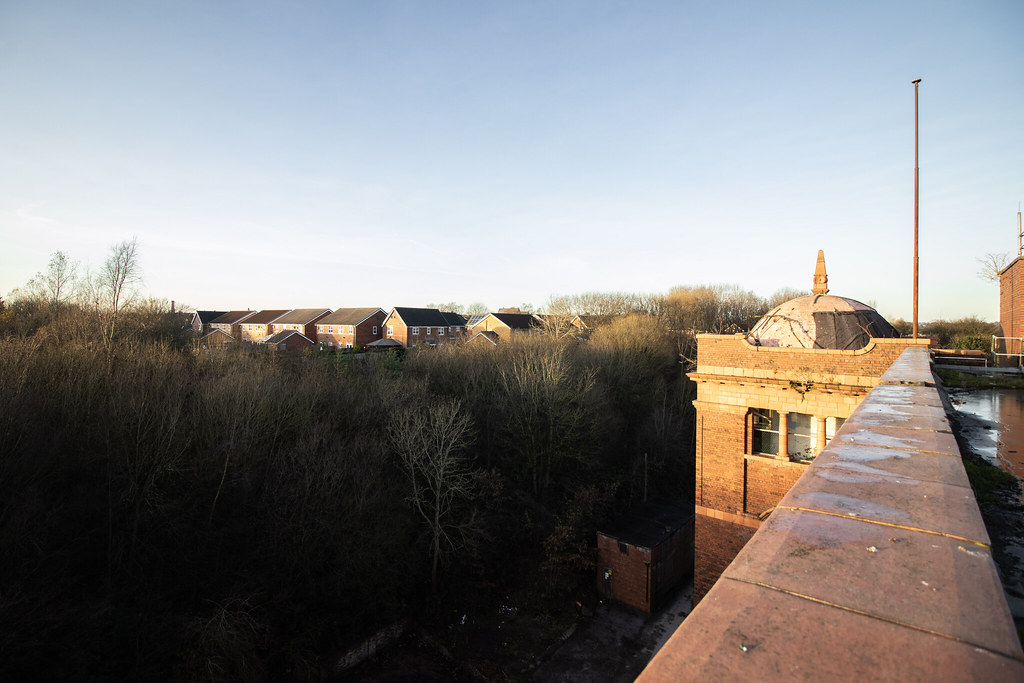 A slippery trek over the roof took me to the opposite dome. 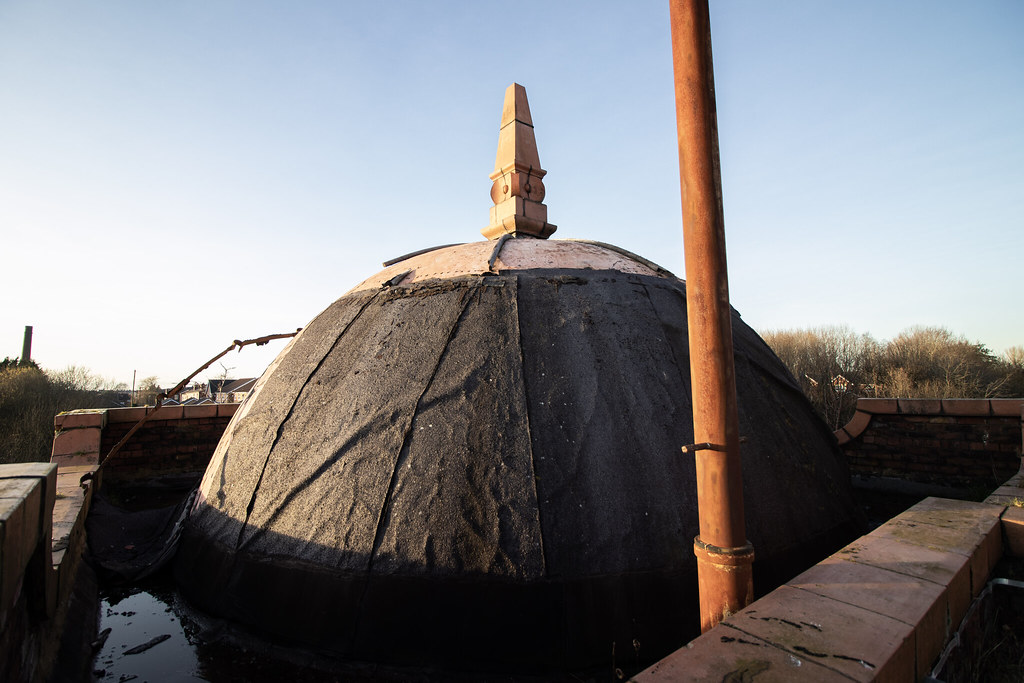 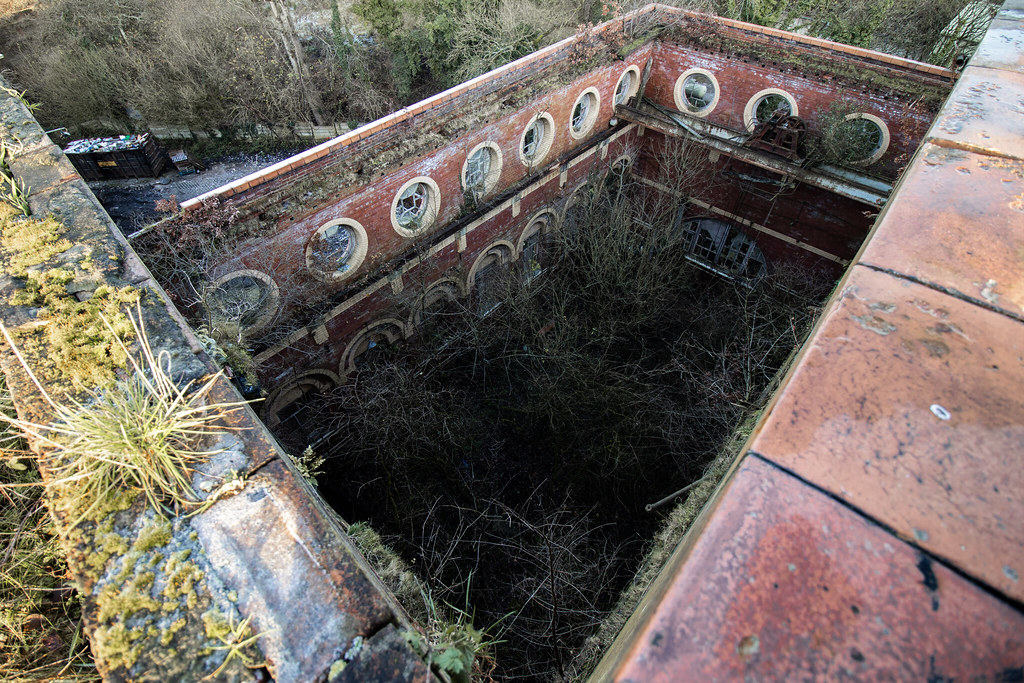 I won't abuse your eyes with the surrounding views of residential Chorley, so to finish, here's the silhouette of the tower that's future hangs in the balance. 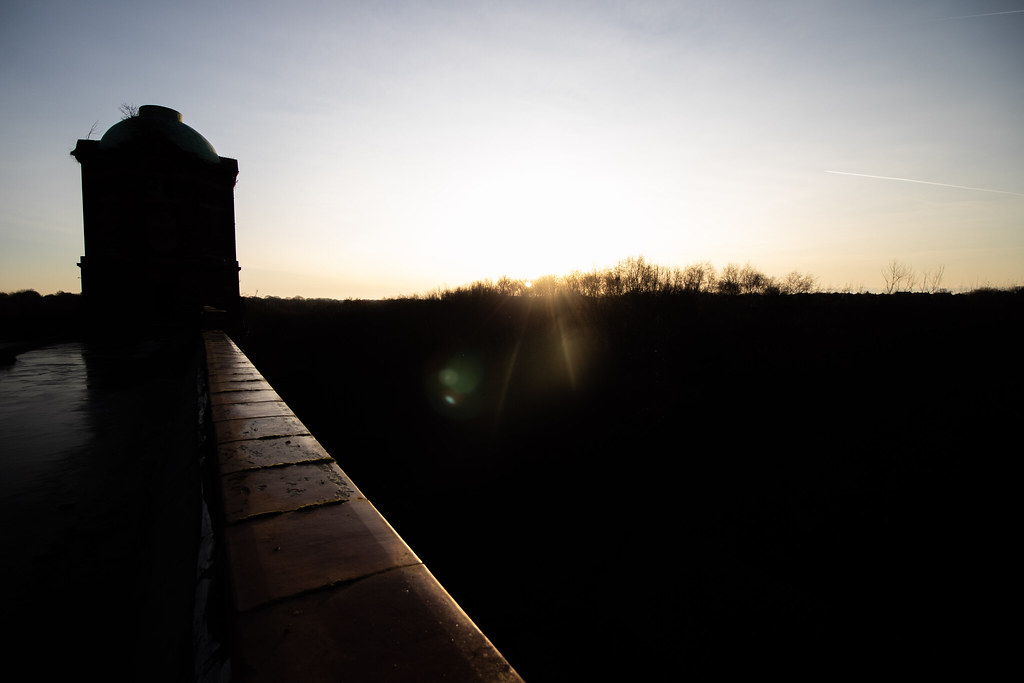 The kids from the surrounding estates come in here a lot and have a setup in the bowling alley but a group who I was with at the time got caught(just left the room before he entered) so they've increased security.

We went here about 3 weeks ago. We got in no trouble, even though security is still on site. We actually abandoned the attempt at exploring it though as the floors felt horrendous and it just felt incredibly dangerous, the point where we accessed it would have meant crossing the dodgy floors to get anywhere. May go back at some point and try again. This is one to be very careful with if anyone decides to go.
You must log in or register to reply here.
Share:
Facebook Twitter Reddit Pinterest Tumblr WhatsApp Email Link