Regular User
In the gloomy, empty world of the Liverpool warehouse, the hoist mechanism is as close to ‘epic’ as it usually gets. With this in mind, and having failed to get in last year, I set out to have another crack at Heap’s Rice Mill since this is a big place and there seemed a chance that more than the single hoist which has been photographed so far may still survive. 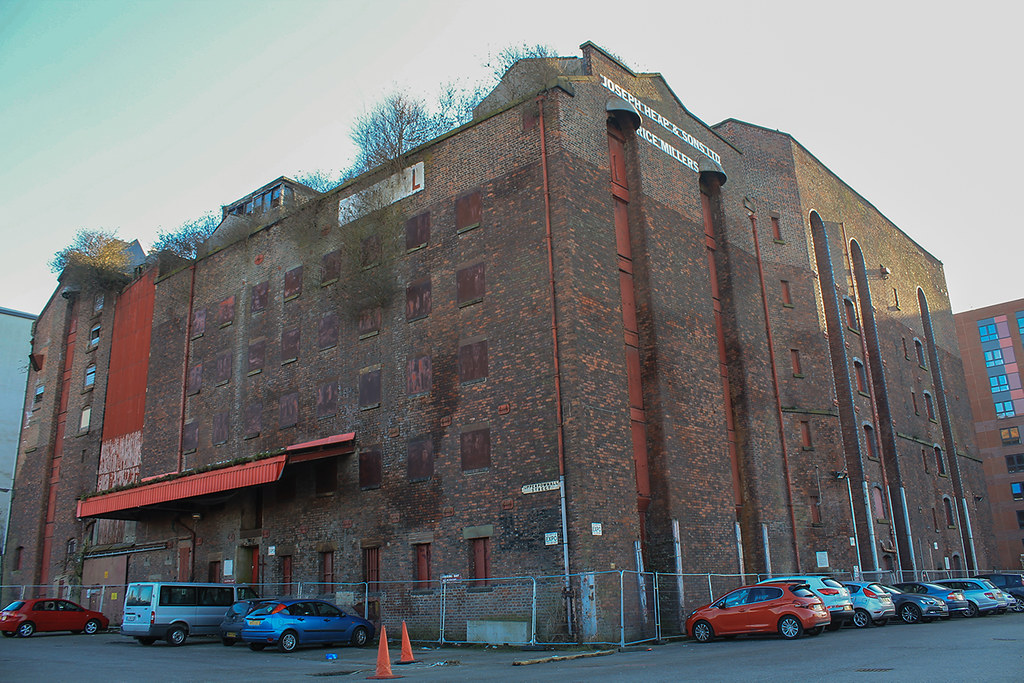 There are five reports on this building, four in 2010-11 and a recent one by the Wildboyz in 2017. In two of the reports (Jimmy, Rookinella) there is a picture of the same hoist.

There is also a 2018 piece in the Liverpool Echo https://www.liverpoolecho.co.uk/news/liverpool-news/inside-derelict-heaps-rice-mill-14144530

These reports contain some of the history of the building - for much more on this and also current development plans see the Historic England links below.

But first it’s worth describing the layout of this combined warehouse-mill. According to the listing https://historicengland.org.uk/listing/the-list/list-entry/1421261 the building is composed of four blocks A - D as shown below, built in that order, with the alley between the A and B blocks roofed over in the 70’s. The Xs mark the spots of potential hoists as judged by the location of loading bays (the vertical channels in the face of the building you can see in the exterior picture - this is where goods were hauled up with hoists). 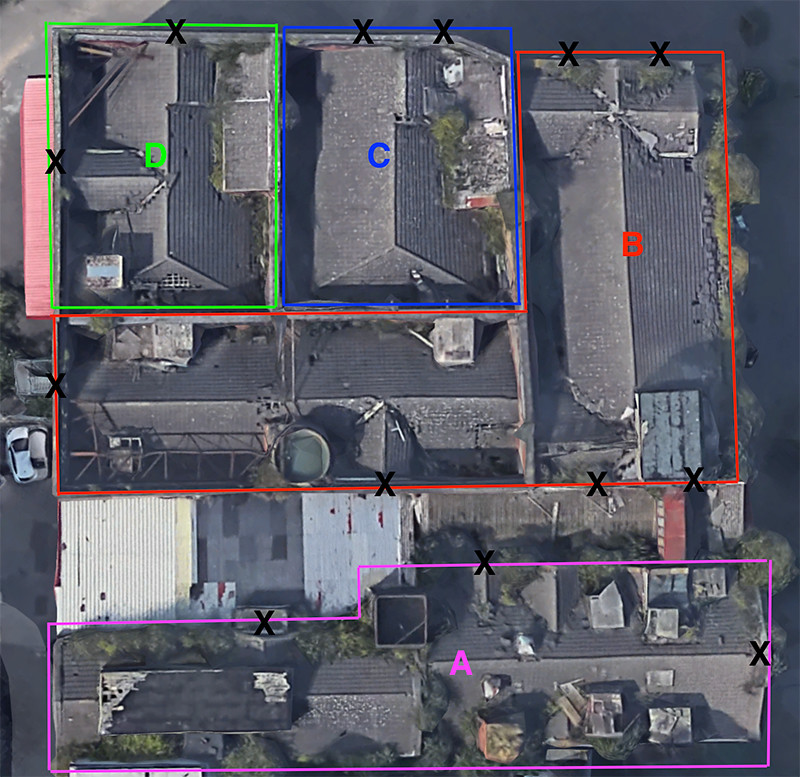 There are five hoppers strung between the buildings in the alley, and two triple decker walkways, high up, connecting the top floors. Views from either end of the alley. 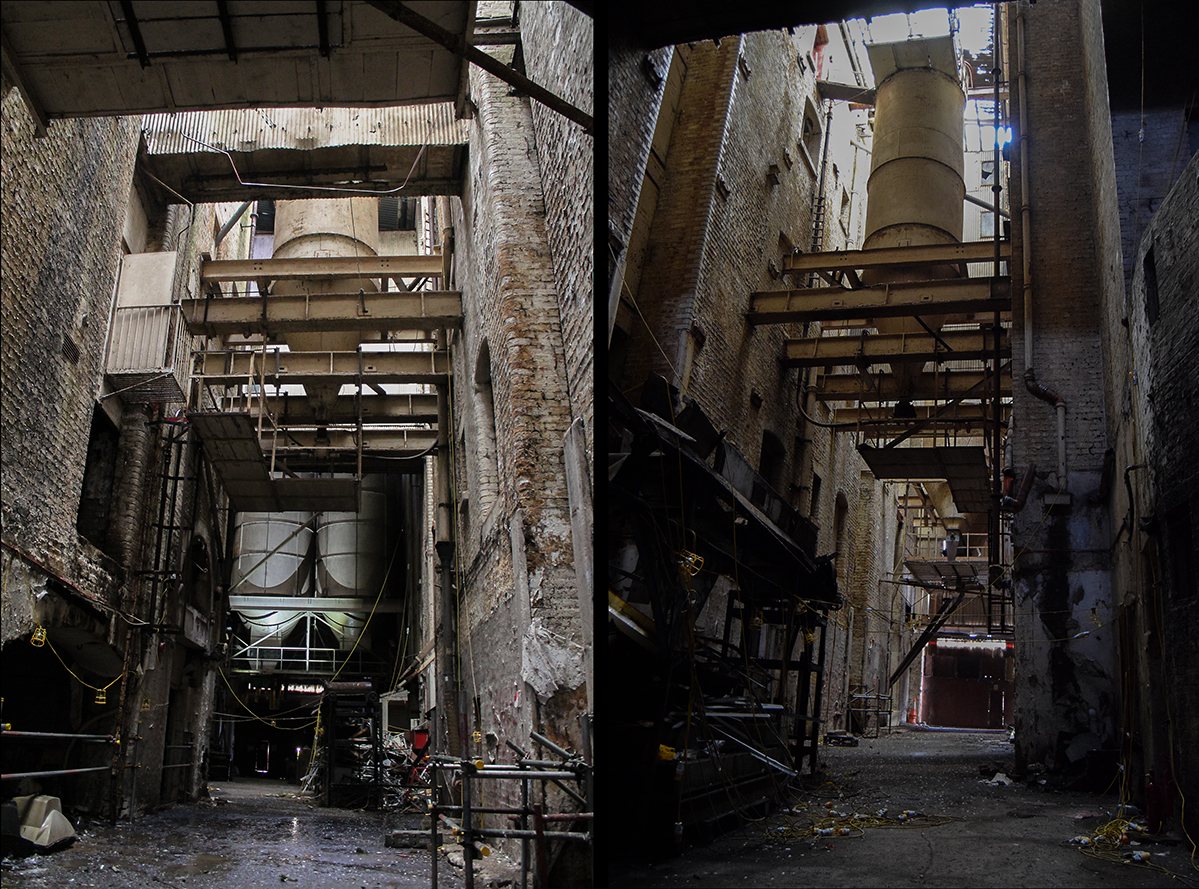 Some of the hoppers. It’s possible to climb onto most of these, but somehow I didn’t feel the need… 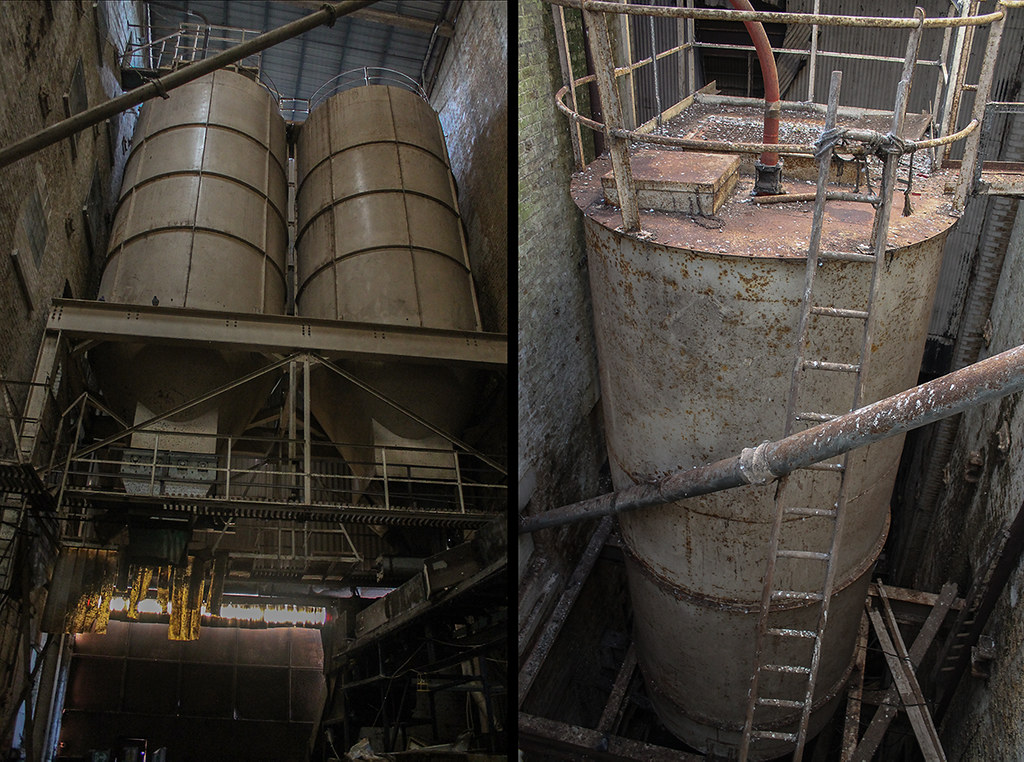 On the left, access onto a pair of hoppers, and on the right a loading bay, was originally outdoors, now indoors, stretching up to some pulleys. 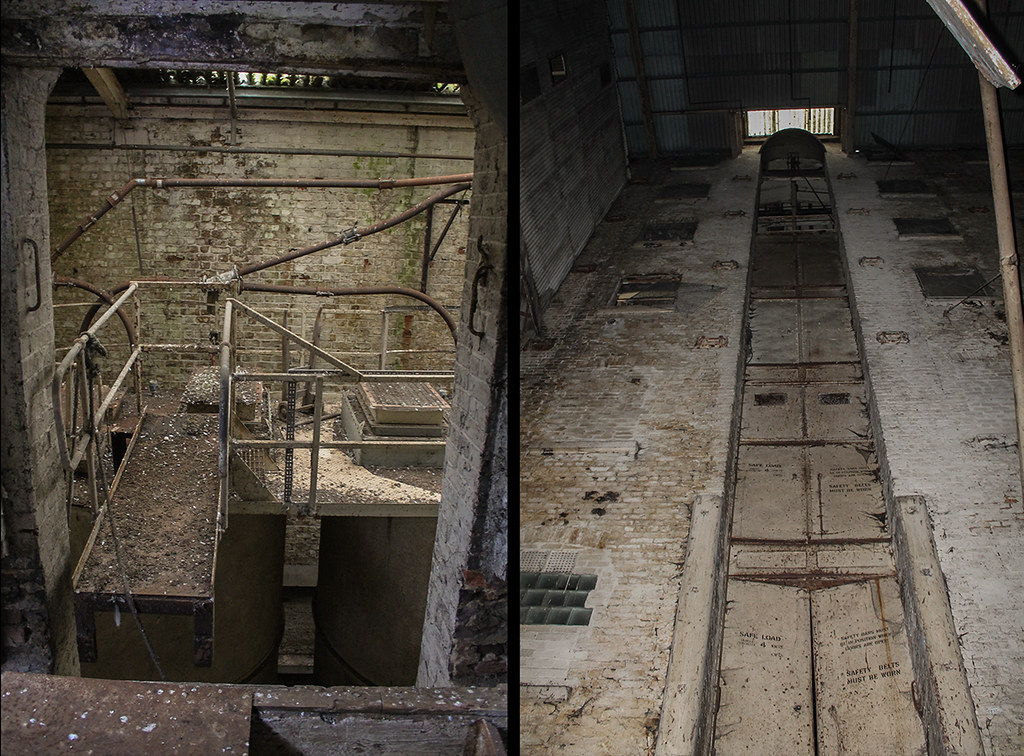 At this point we head straight up to the topmost levels where the hoists live. There is plenty to see en route - have a look at the Wildboyz post to see nice shots of the bulk of the building and the basement. Basically its a huge fetid mess, part-filled with numerous chutes, flumes, conveyors, hoppers, branching pipework heading into floors at funky angles etc. The good news is that the surveyors have been in, laying plank walkways around most of it and cordoning off the more lethal areas of rotten floor with tape. Amusingly enough, the Historic England spot-listing report references Rookinella’s 2011 28dayslater post ‘in respect of the condition of the interior’ - presumably these were the only pictures they could find.

So just two random pics for the main part of the building- a typical room and some objects. 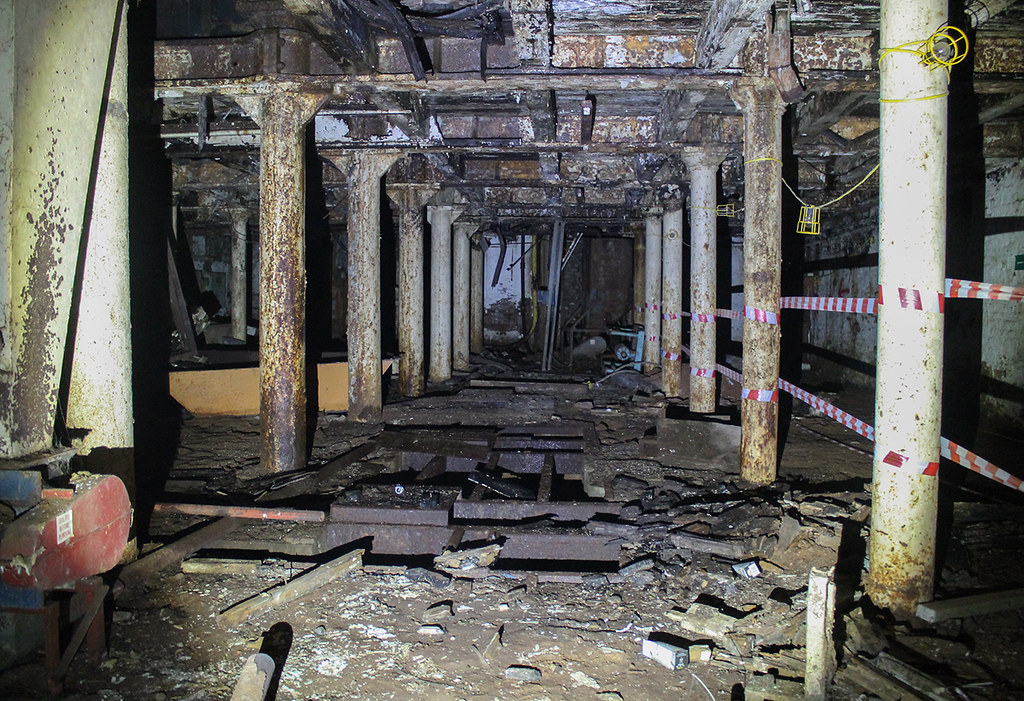 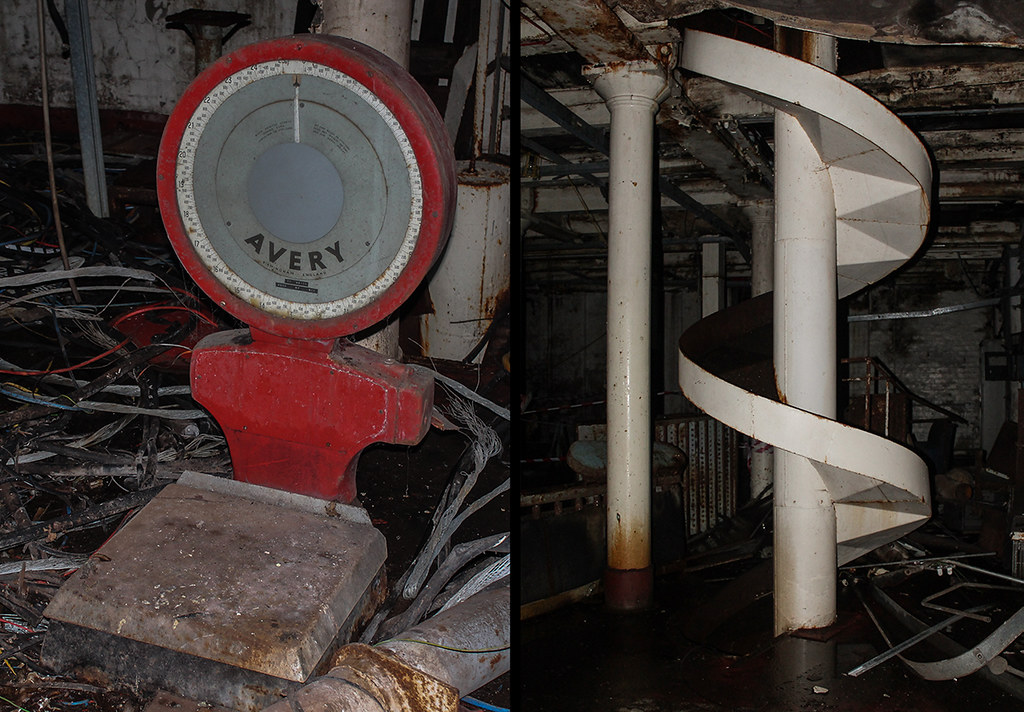 At the top of the A block we find the first hoist - it’s above where the ropes are dangling down - but I didn’t fancy getting up close and personal with this one given the lack of floor. 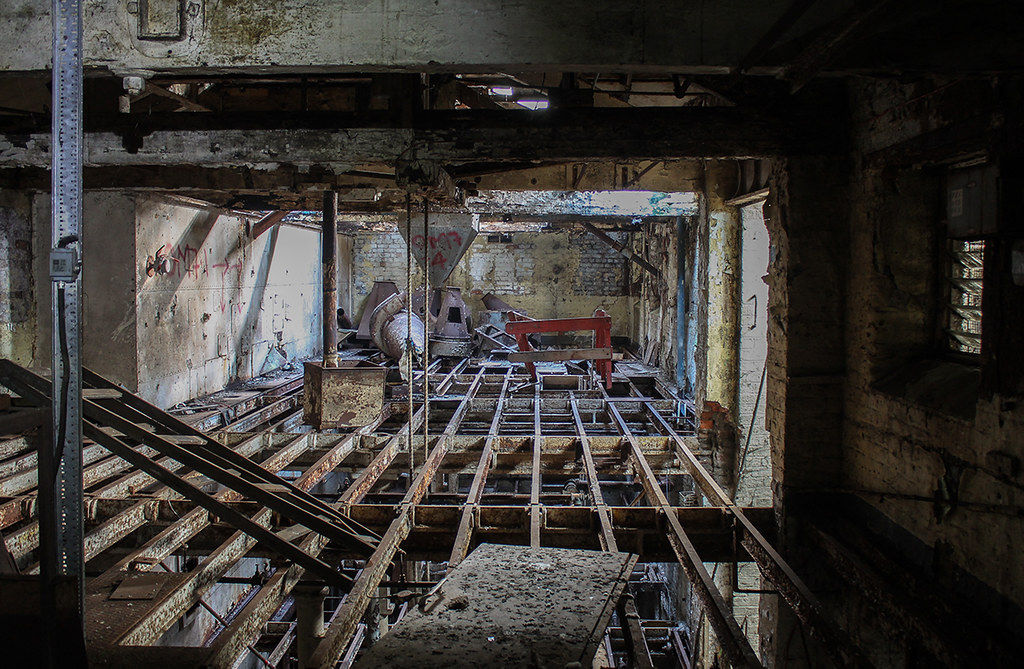 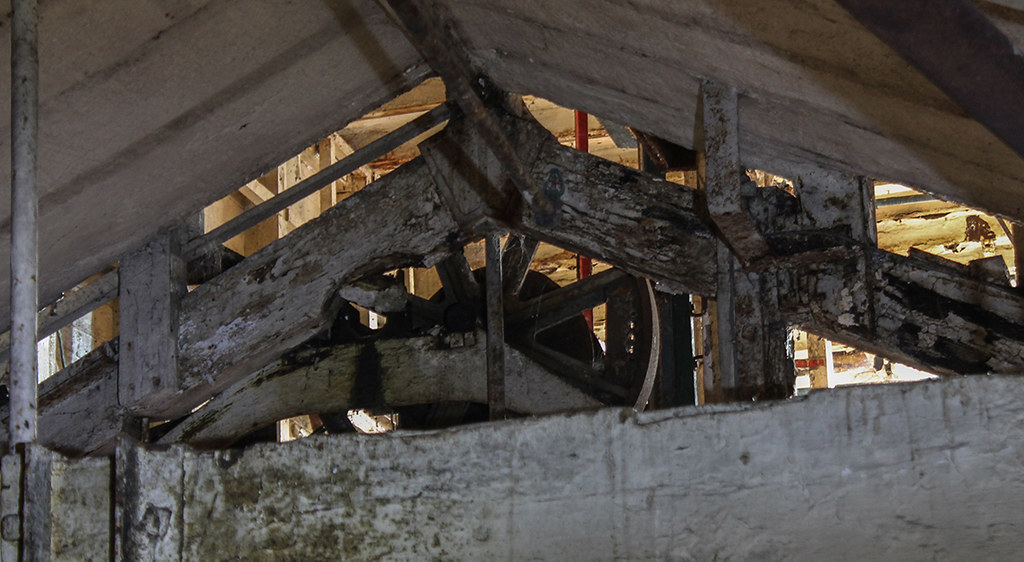 Heading down to the right hand end of A block there’s a second hoist - the axle with the large gear still spins as I found out while clambering up. 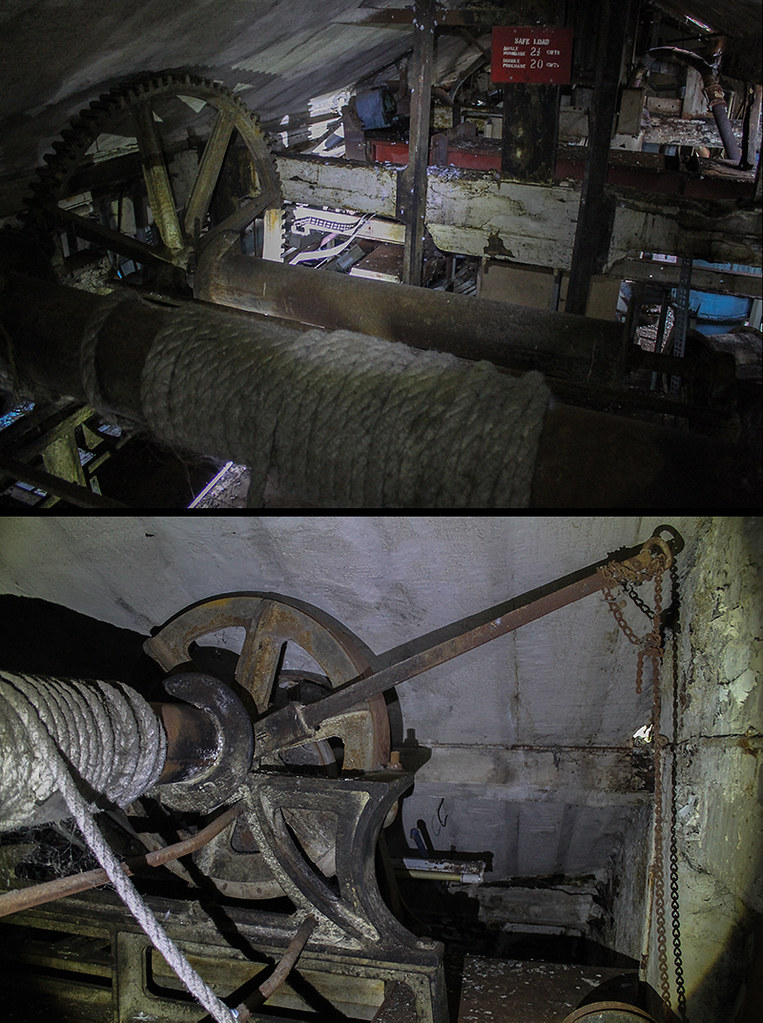 Next to this one were some little flat-bottomed bottles - these are oil reservoirs for the bearings, attached as shown on the right (a picture of a hoist I found in a different warehouse where they were still in place). The internet tells me these are called Leuvain’s needle lubricators. 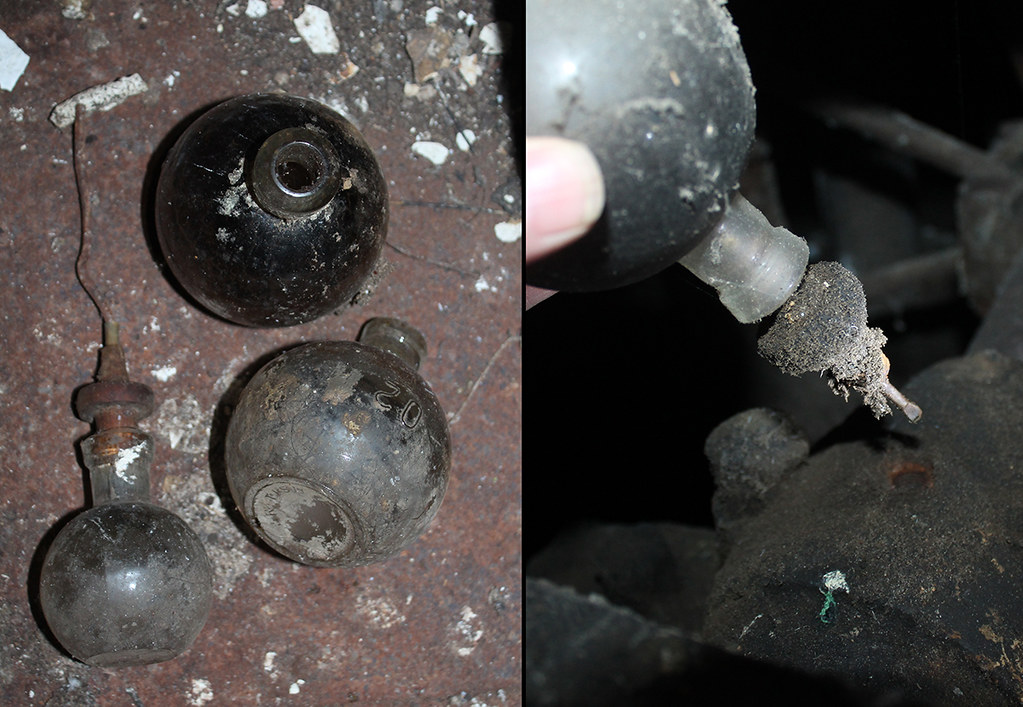 Heading over to the top levels of the L-shaped B block, on the left hand side its mainly ducts on the top floor with nothing in the attic. 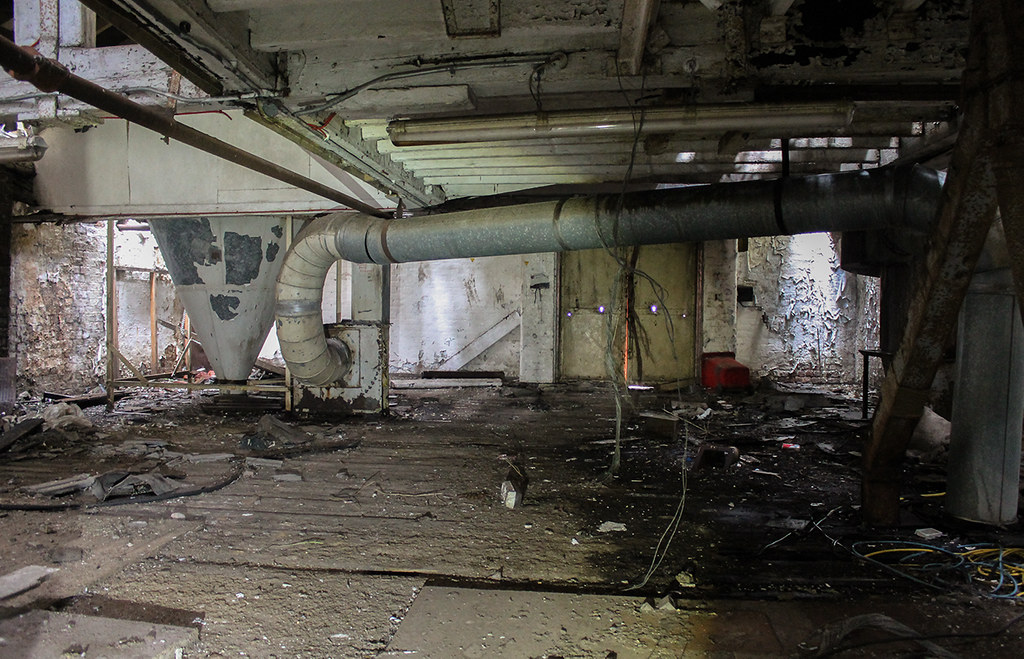 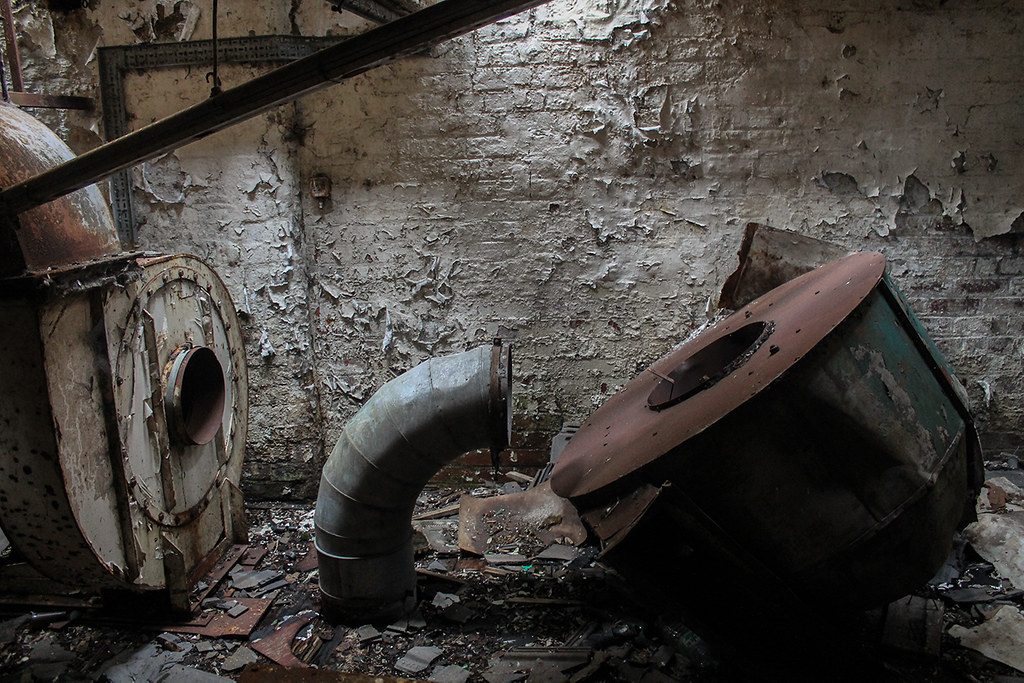 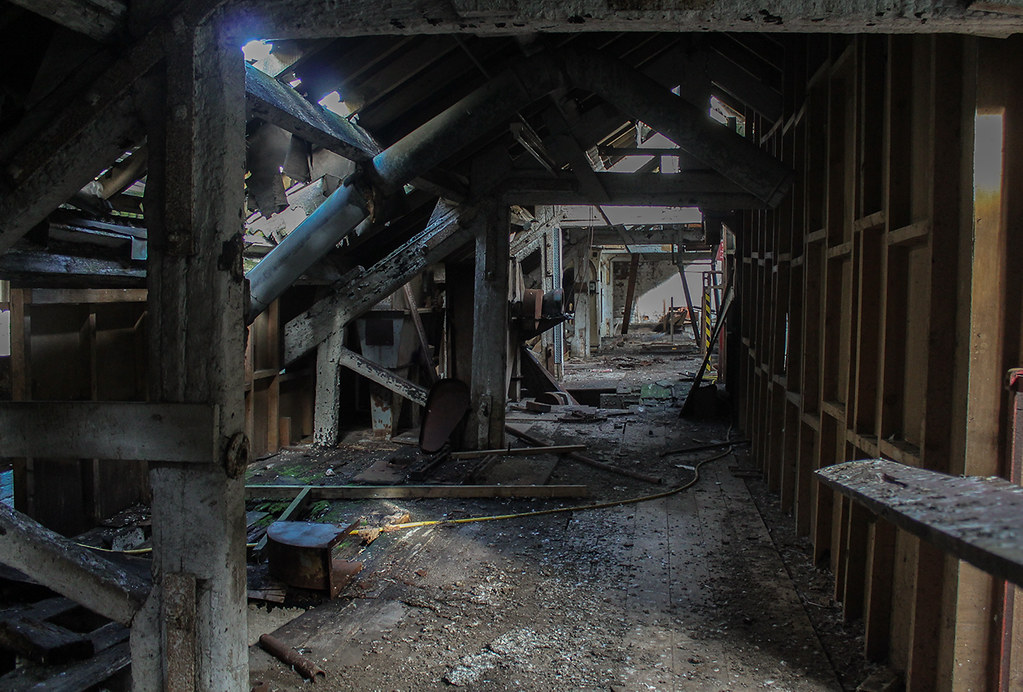 Beneath the top floor of the right hand section are very large hoppers extending down several levels. 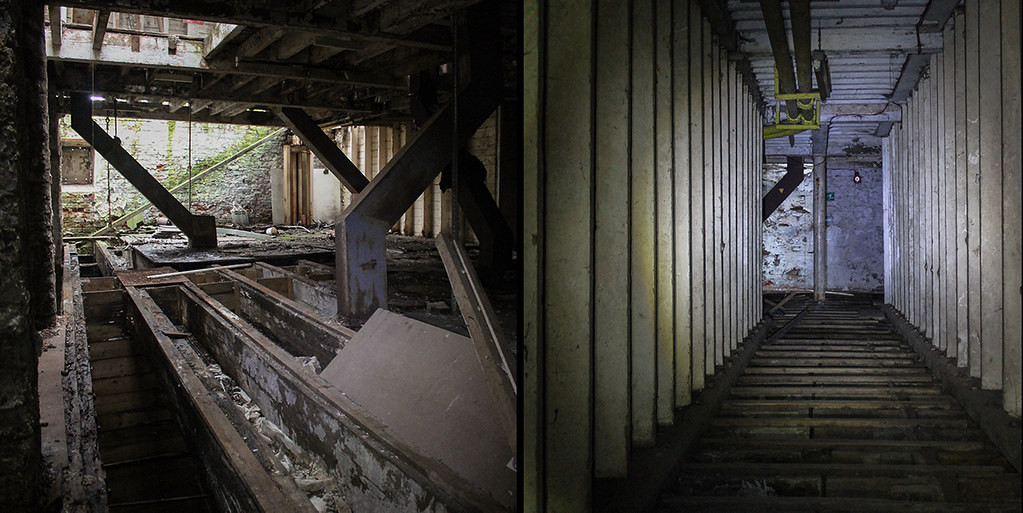 Under and between the hoppers. 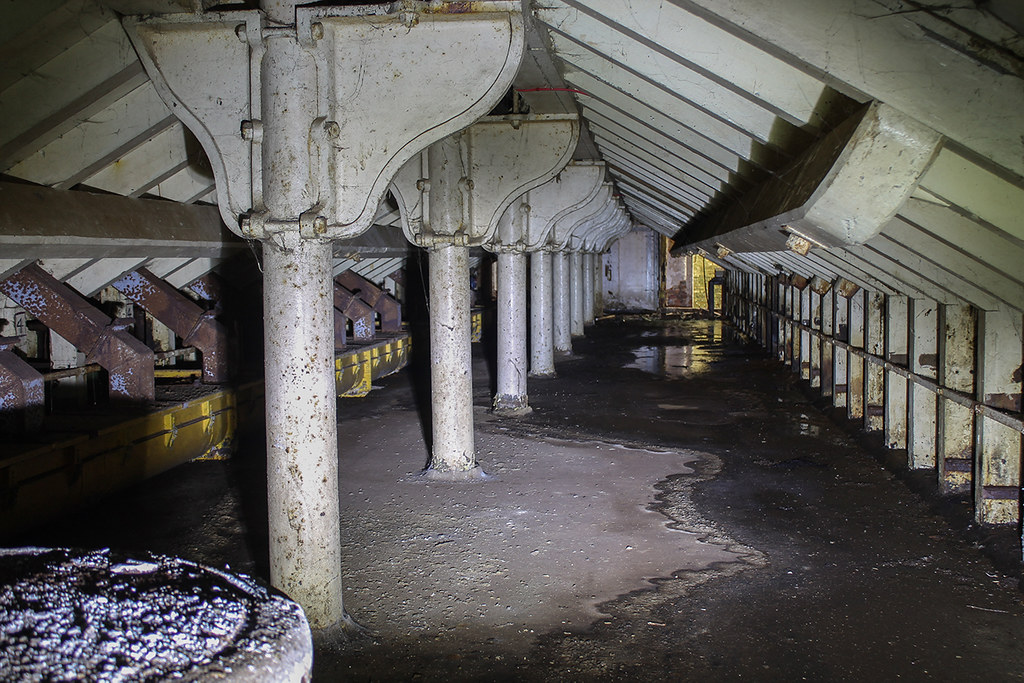 Nothing in the attic of this part either except for a heart-shaped artwork on the wall between where the hoists used to be. 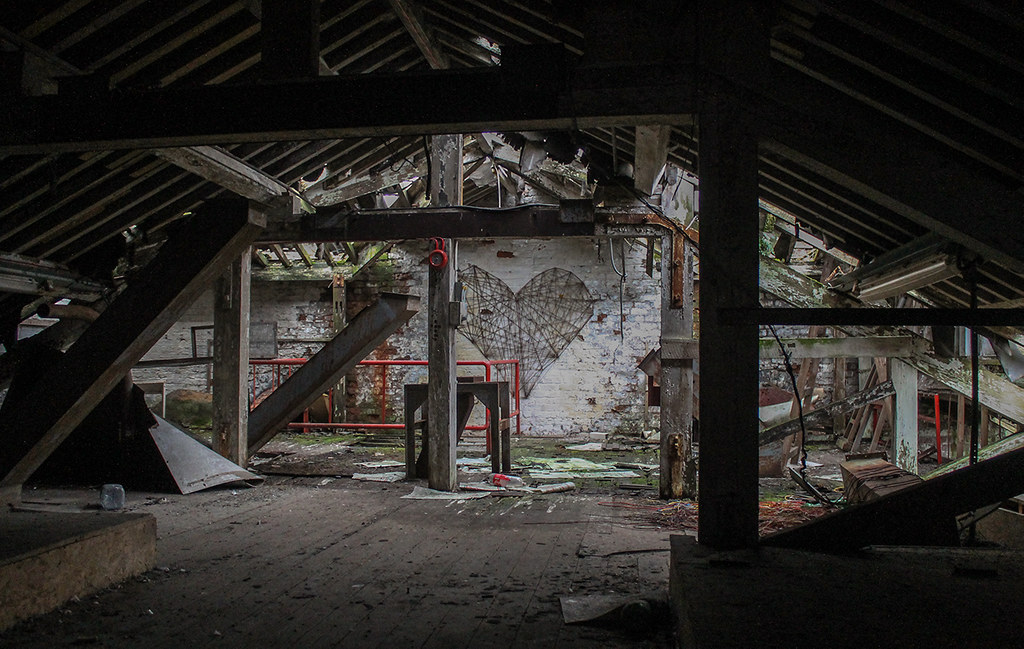 The door to the C block was guarded by two cyclone-type sentries. 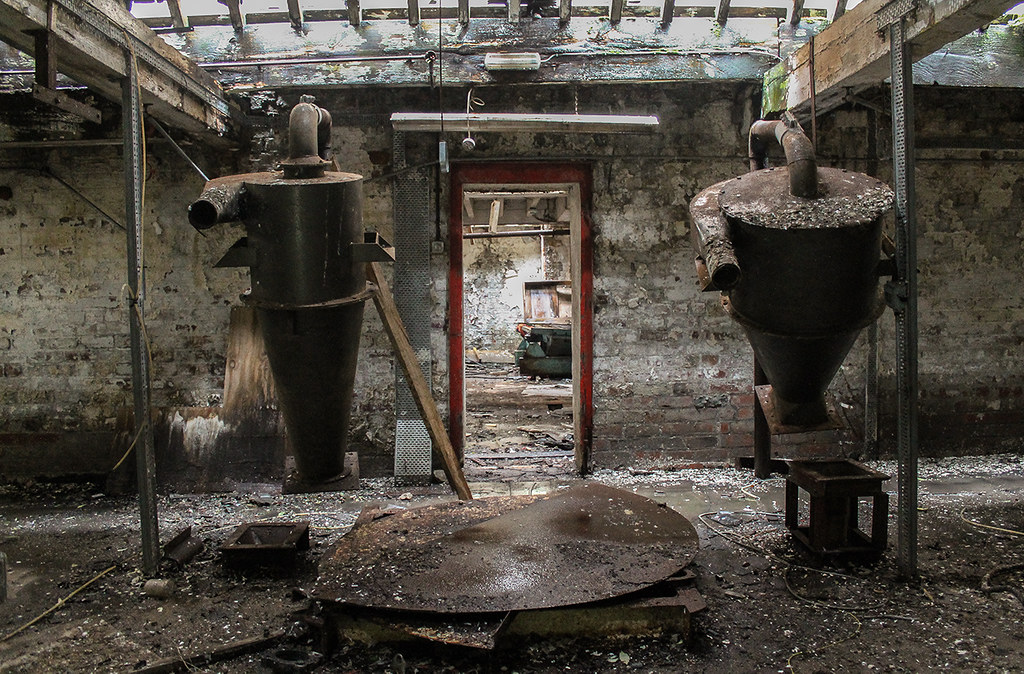 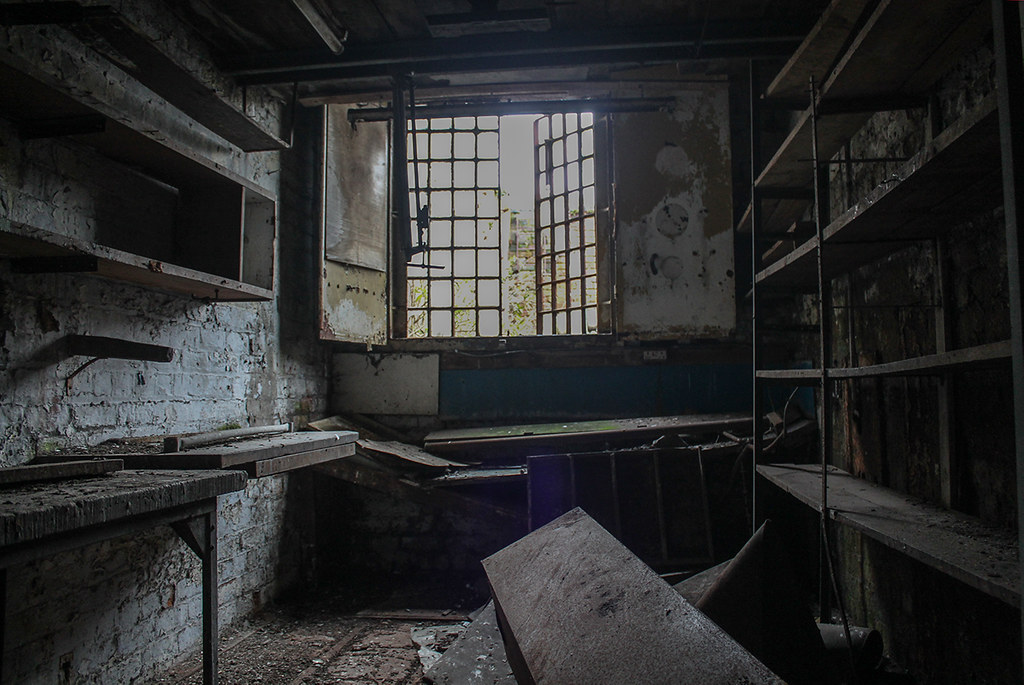 No hoists in here either and the attic (jigger loft) was empty, although some pulleys, brake shoes and rope remain nearby. 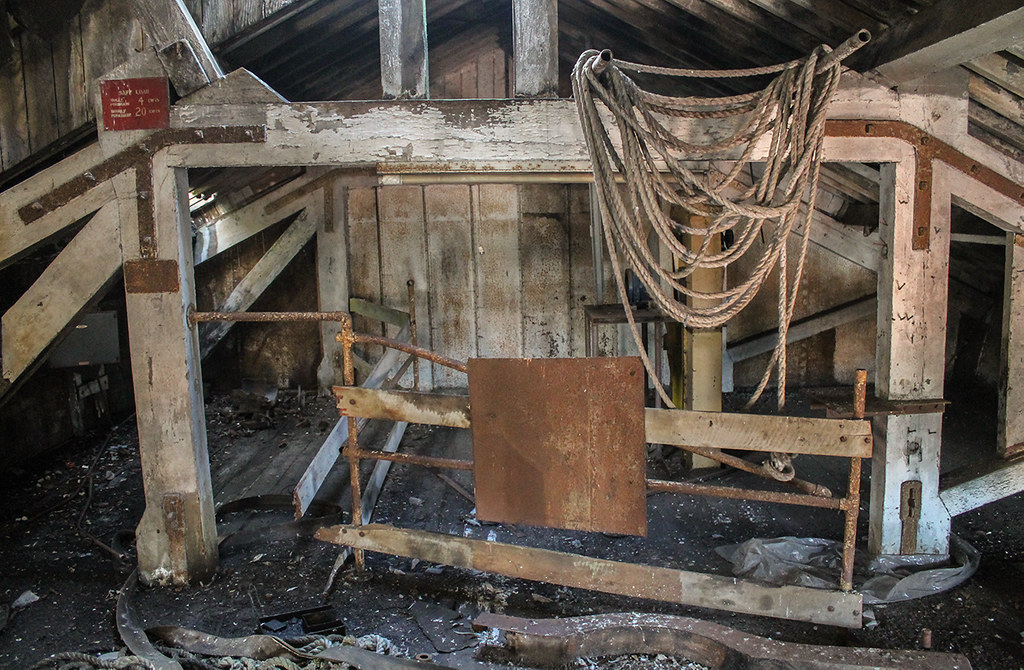 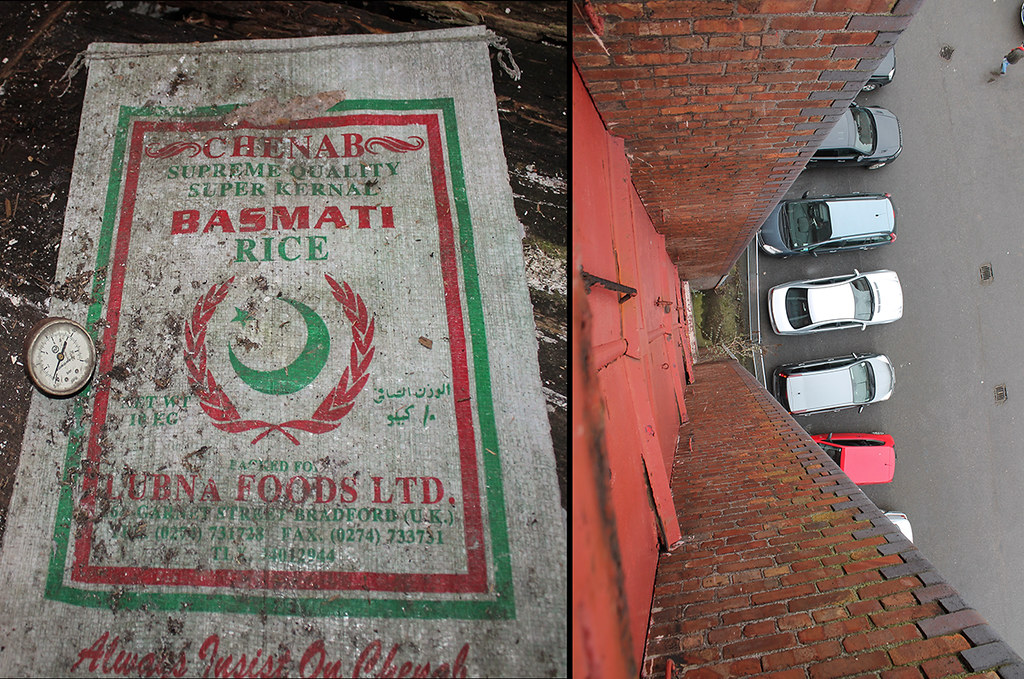 On into the D block we pass one of the remaining safety belts. The drawing on the right shows how these were used; it comes from a useful source of information on Liverpool warehouses 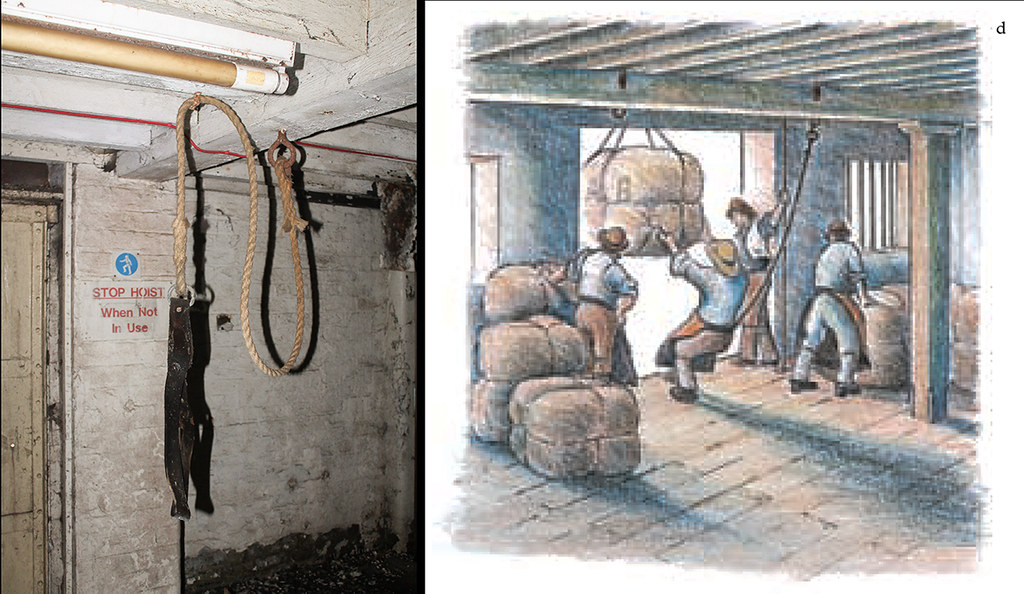 In here is a small thicket of machines and ducts. 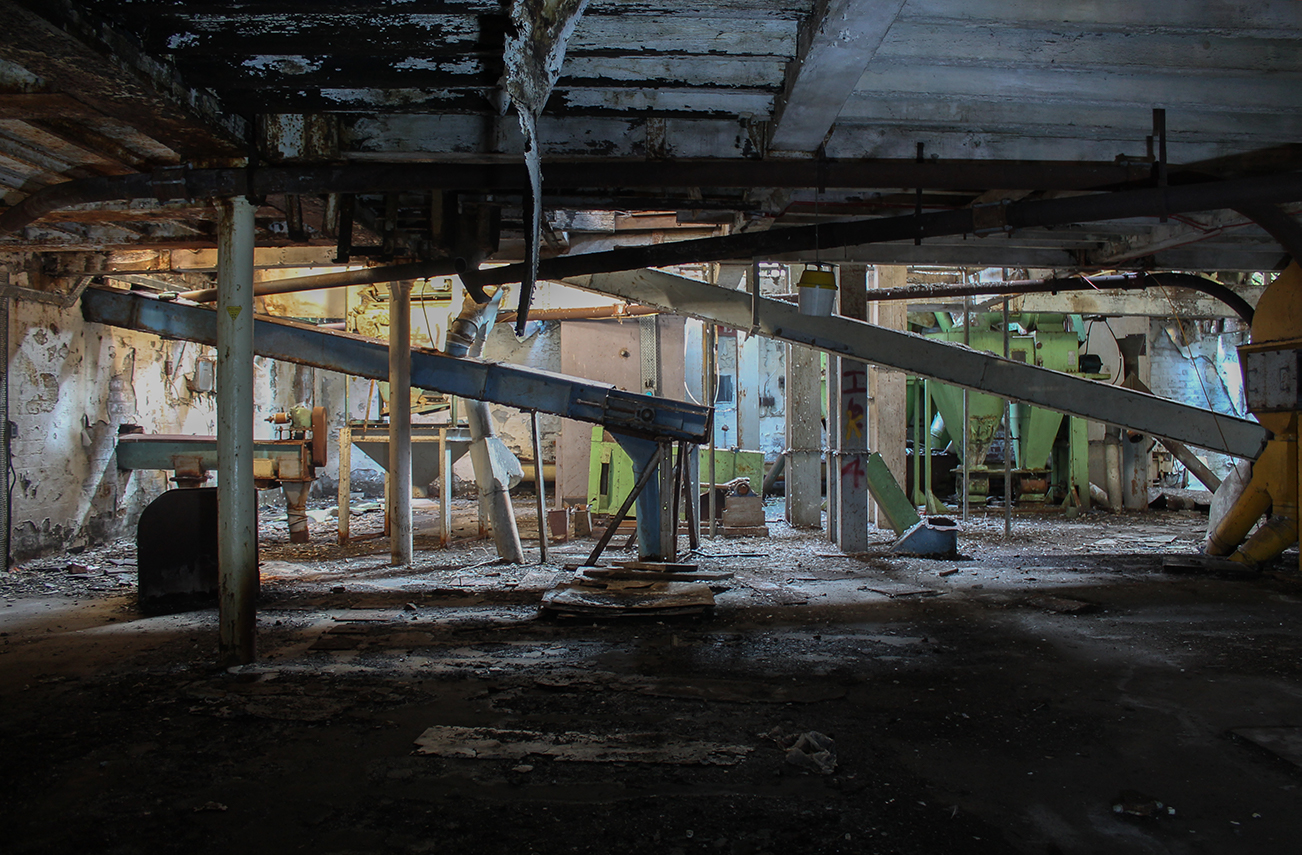 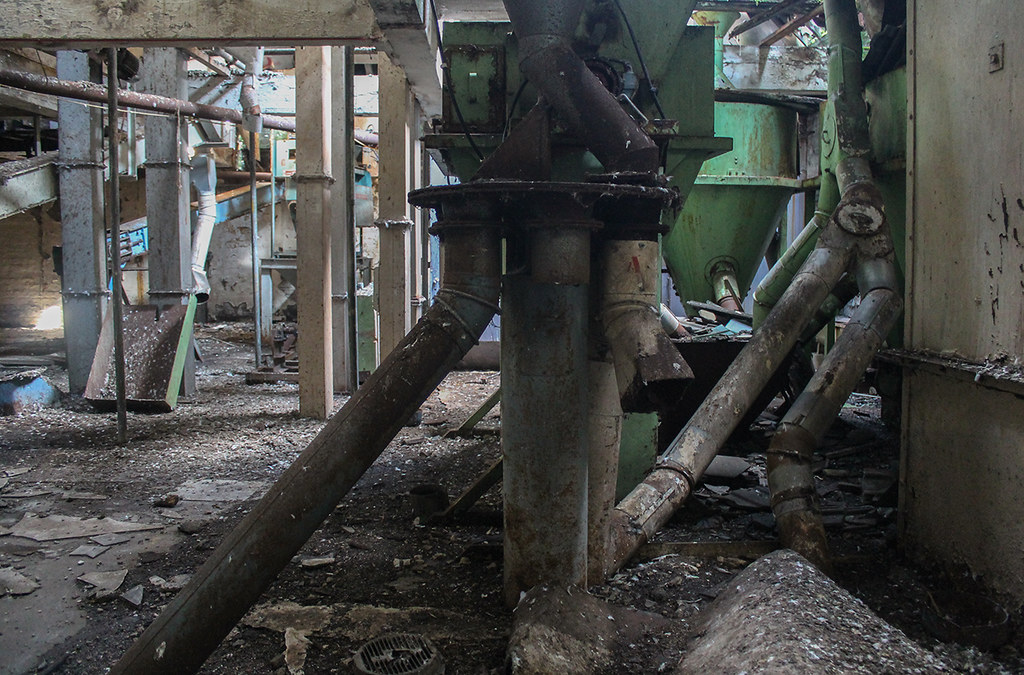 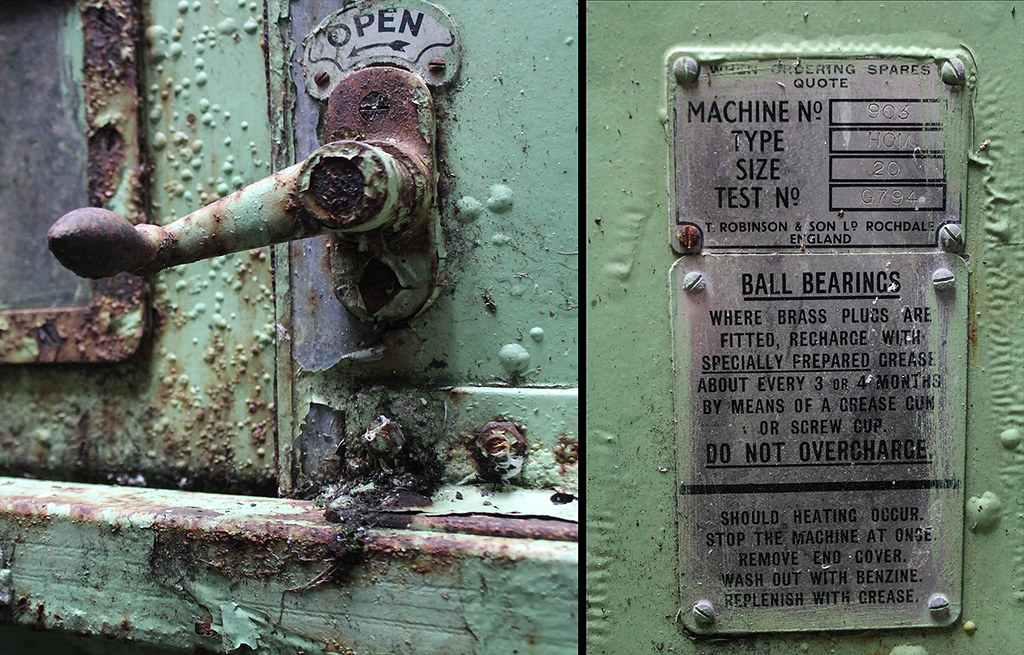 One of the jigger lofts was empty but the other contained another hoist. This is the one pictured in previous reports, although now in rather worse condition. 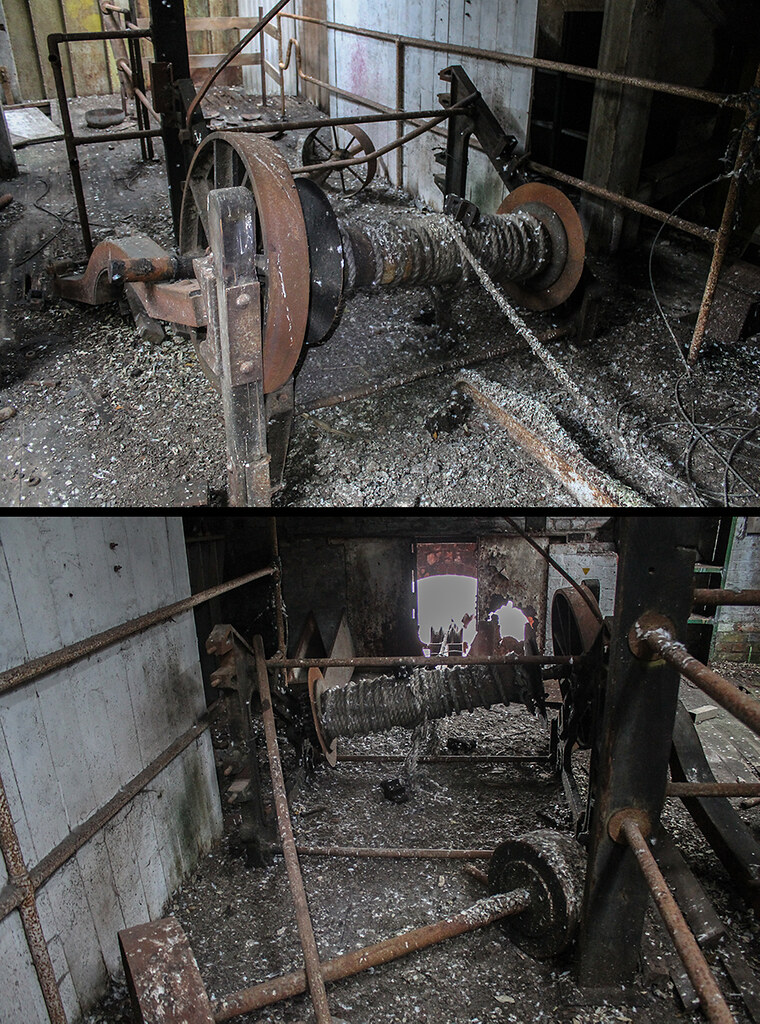 Mr and Mrs pigeon keeping an eye on the intruder - their chicks were behind the wall next to the hoist.

Finally I climbed up past yet more inscrutable ductwork to the little hut with windows you can see on the roof in the first picture, to take in the view. 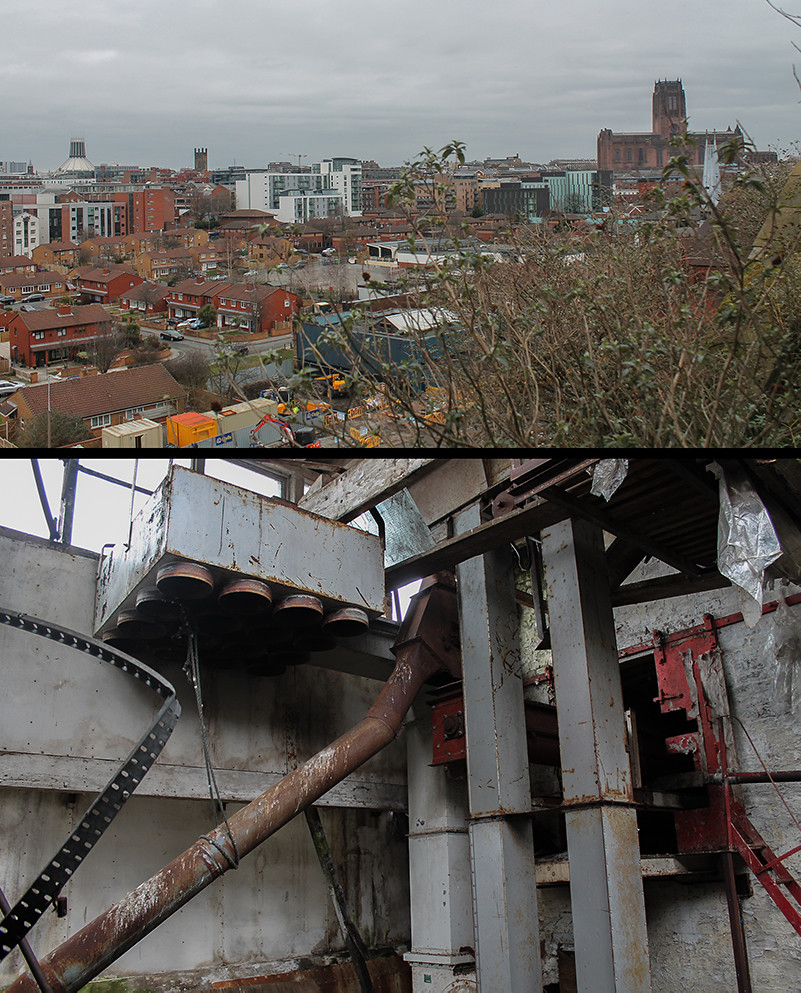 Compared to earlier 2010/11 reports the place has degraded significantly, but it’s still fun to explore, and reasonably safe if you stick to the tourist trail of scaffolding boards (but be careful if you go off piste). There are a lot of things to see I haven’t mentioned including the fireproofing measures and the design of junctions in the ironwork. I also didn’t find it to be as smelly as previous reports might suggest, possibly because the weather was so cold.
Last edited: Jun 13, 2018

The Man In Black

Regular User
Now that’s how to do a report. Really well documented.

28DL Full Member
Brilliant report! The work you have put in there is really great and brilliant pics too.

I really enjoyed that.

28DL Full Member
That's one heck of a good write up! Very impressive work there chemist, really enjoyed it.
It does look like a death trap in places tho!!

Regular User
Brilliant report, I do like the look of this fetid pit myself.
I'm not from Birmingham.
I don't know where 'Hunters House' is.​

Was it still alive with rats in there?

dweeb said:
Was it still alive with rats in there?
Click to expand...

Didn't see any at all, and I had more visits there than I care to admit (its only a 15 min cycle ride away from work).

Regular User
Well it's been 6 - 7 years since I went in thete so perhaps they polished off all the rice and moved on!

Staff member
Admin
This place was grim back in the day, been in cleaner sewers with less rats than that basement!
Ojay@28dayslater.co.uk‏​