Regular User
An impromptu trip to mid-Wales because my son has been expressing an interest to joining the RAF and I have no problems with that as I am becoming more and more disillusioned as a parent with the costs and value of sending the kids to university. Anyways so with minimal planning we drove to CAD West/East which is the viewpoint on a mountain on the Machynlleth to Dolgellau road where, if at the right time, you can watch the jets fly past very close at 500mph and below you. (I think a 28DL photography meet was arranged here once - was that you @The Kwan).

Took the opportunity whilst in the area to seek out some hilltop WW2 plane wrecks:

1. BRISTOL BLENHEIM Mk.IV L4873
Bristol Blenheim Mk.IV L4873 of No.90 Squadron RAF flew into Foel Wen in the Berwyn Mountains on the 23rd March 1940. Having departed RAF Upwood in Cambridgeshire, as one of three Blenheims on a cross-country training flight, the aircraft broke formation after entering cloud and subsequently flew into the hillside. A considerable amount of airframe wreckage, including several large sections of the wing main spur, is still scattered on the site with much of the paintwork in good condition. 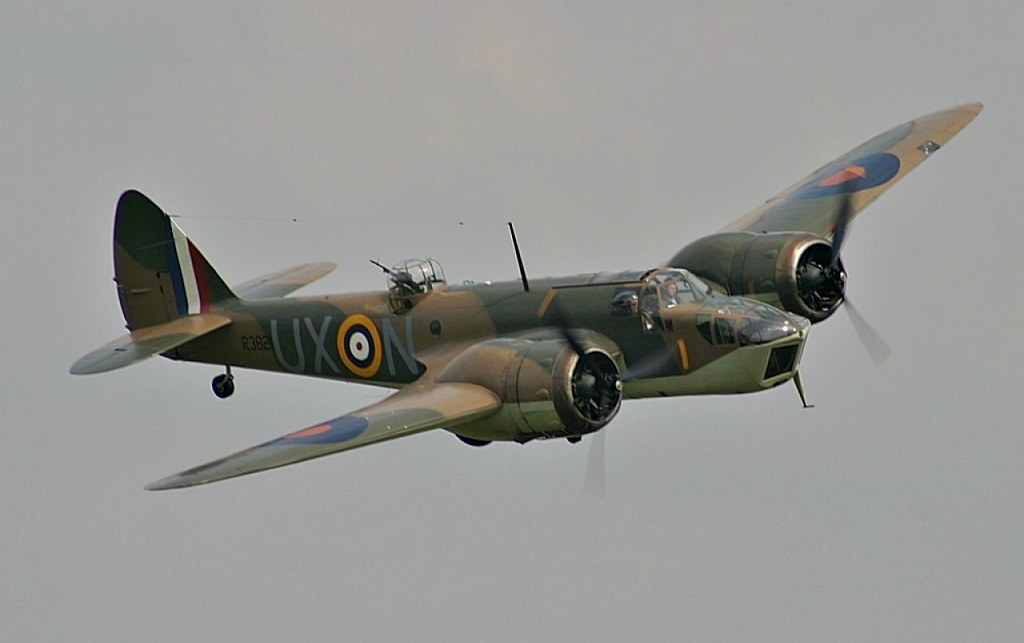 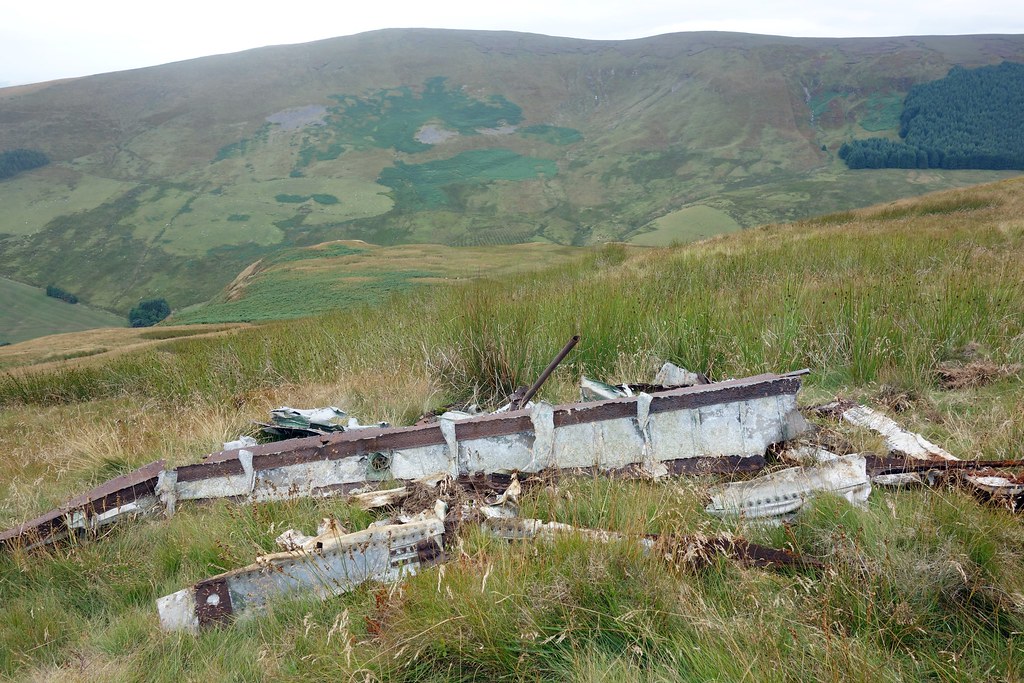 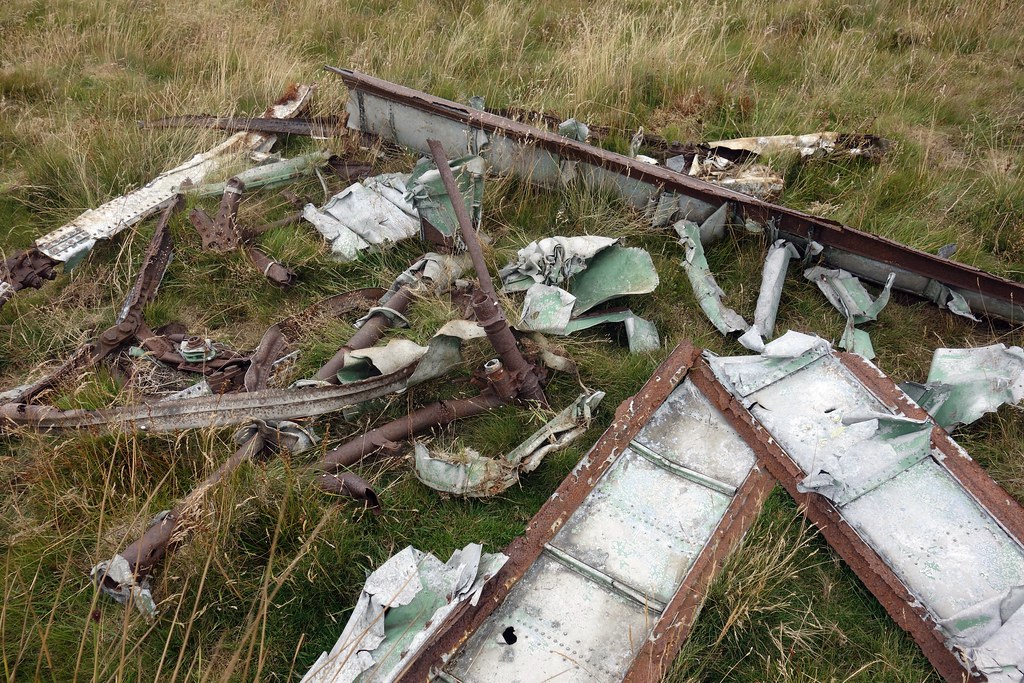 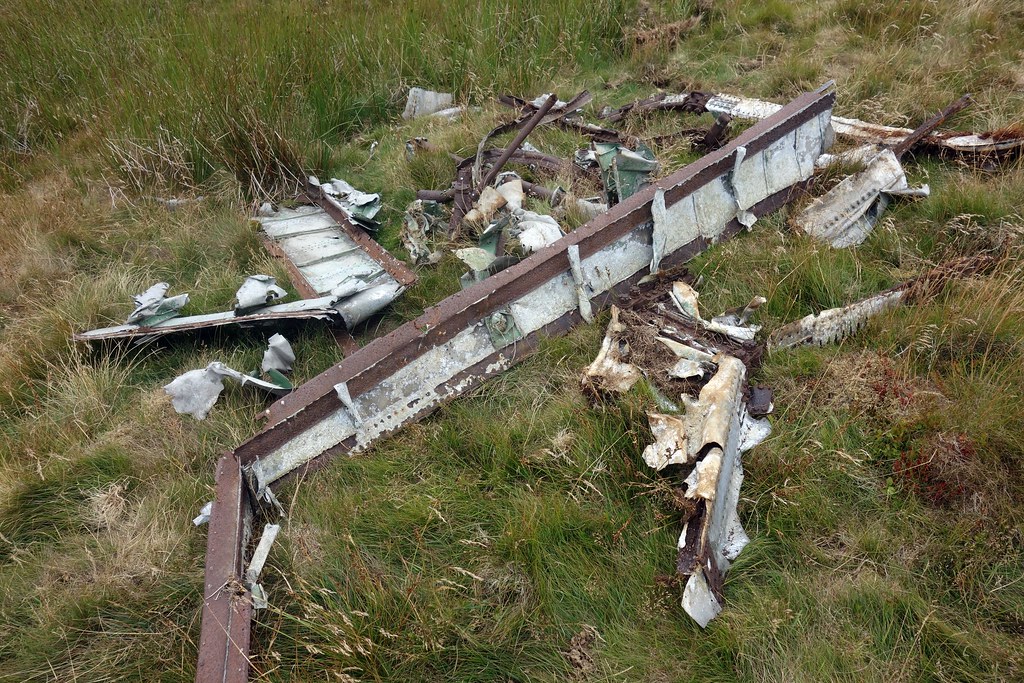 The paintwork is in good condition 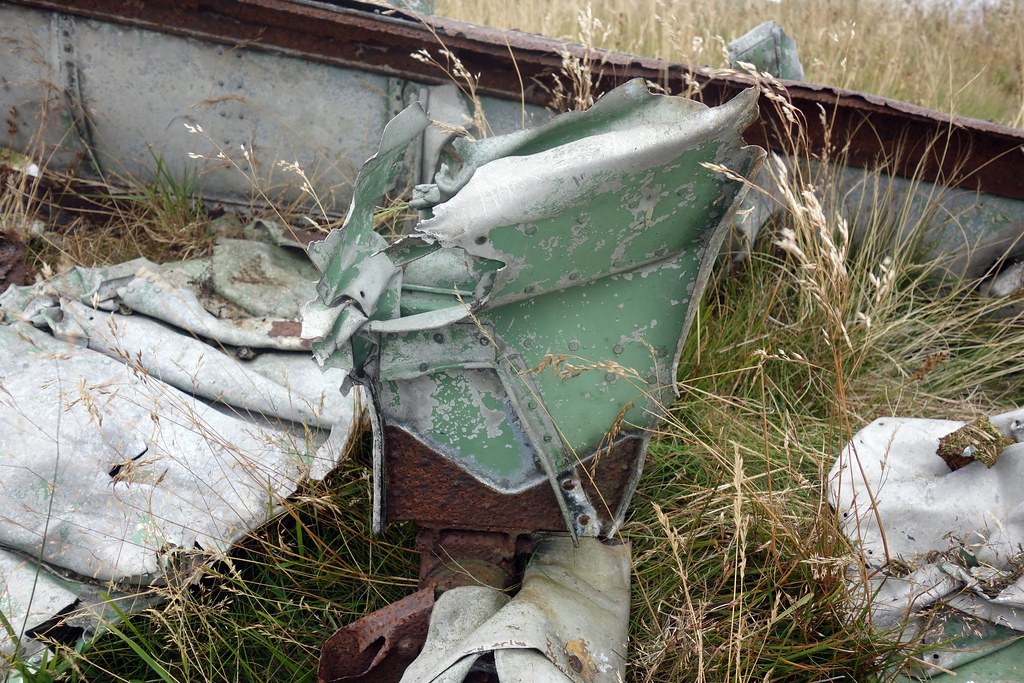 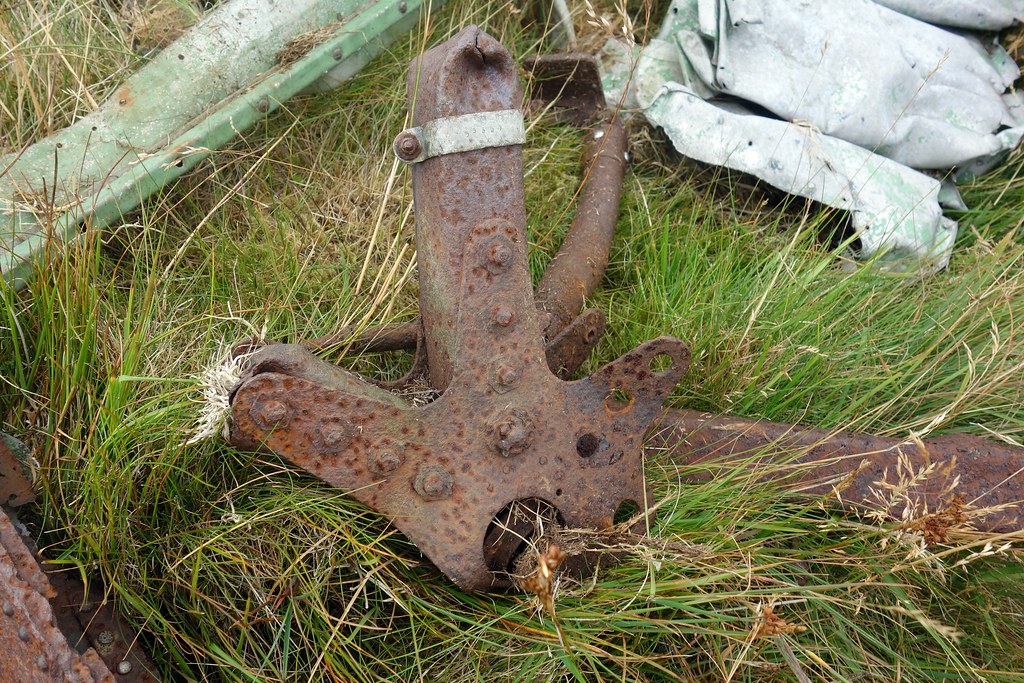 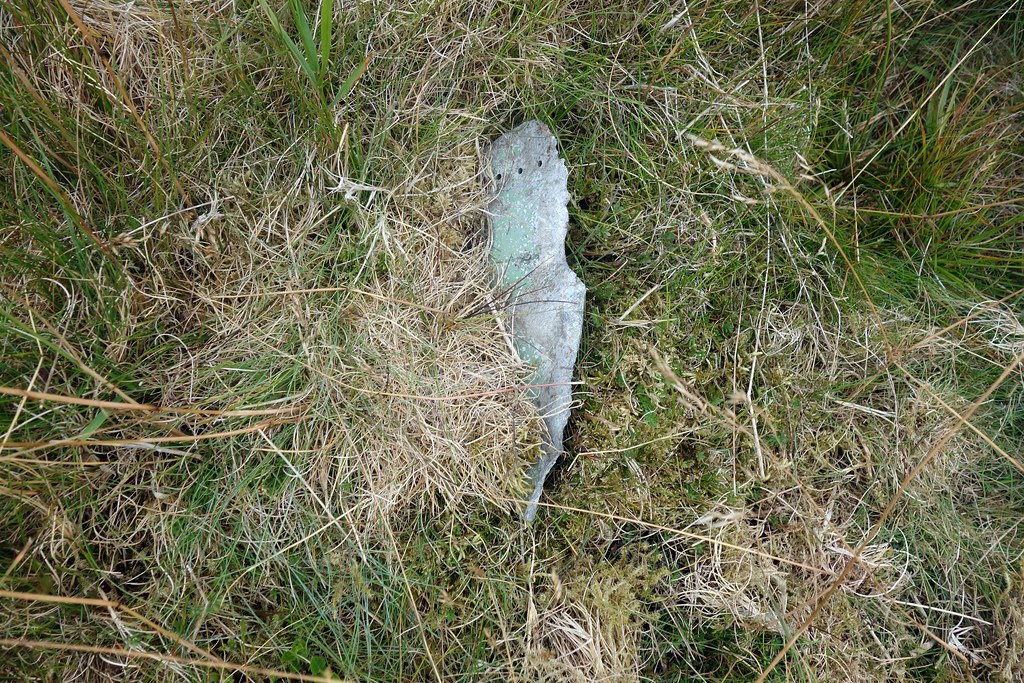 Away from the main topmost pile, wreckage was scattered down the hillside for about a hundred metres 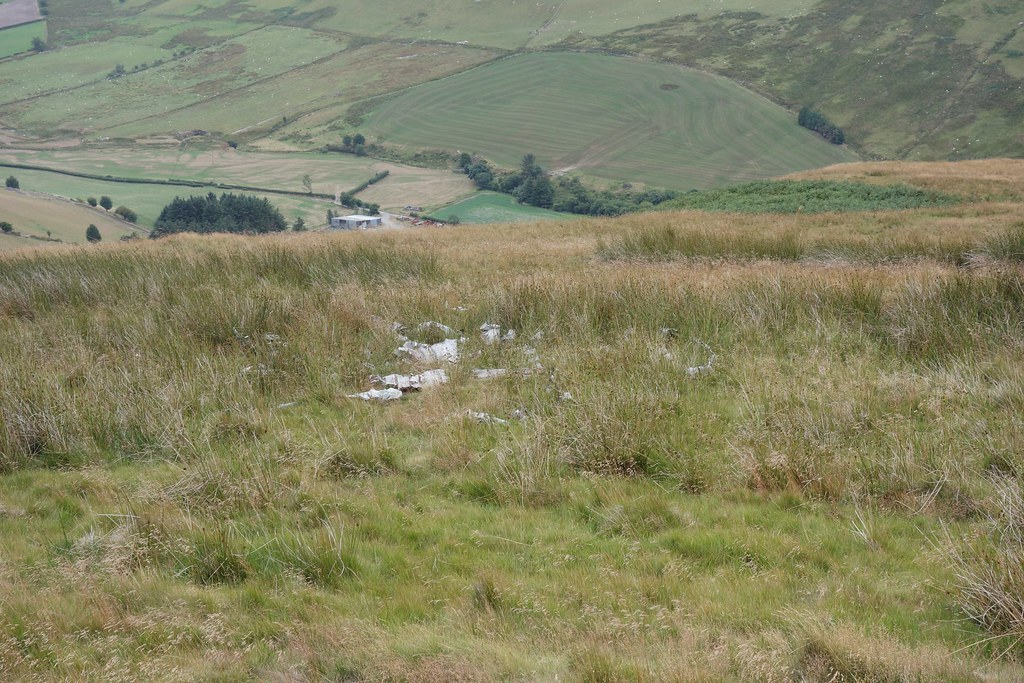 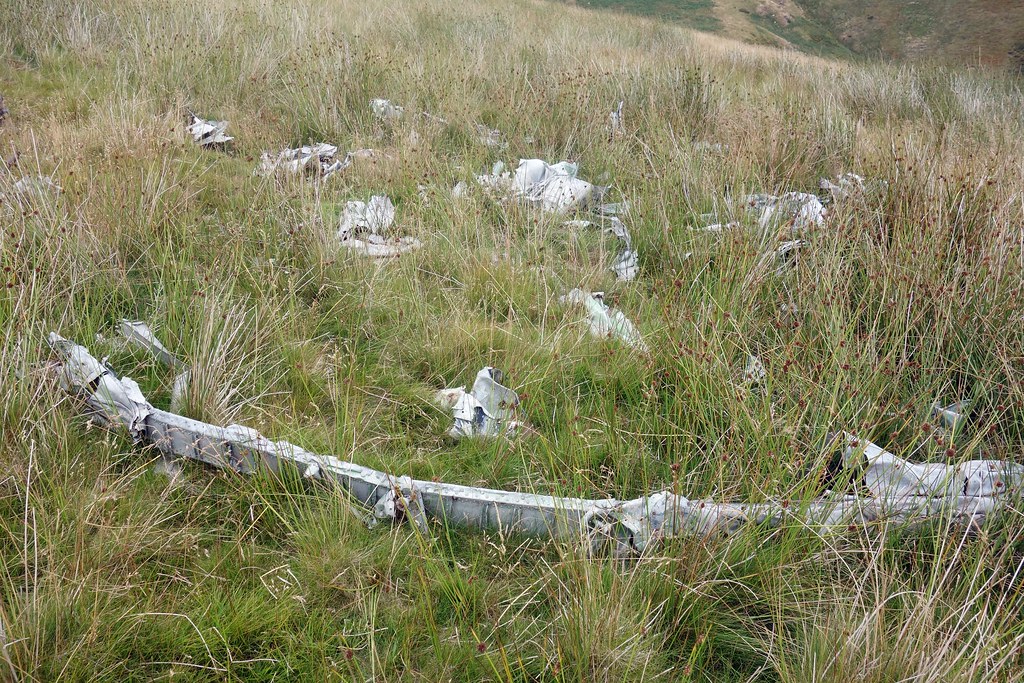 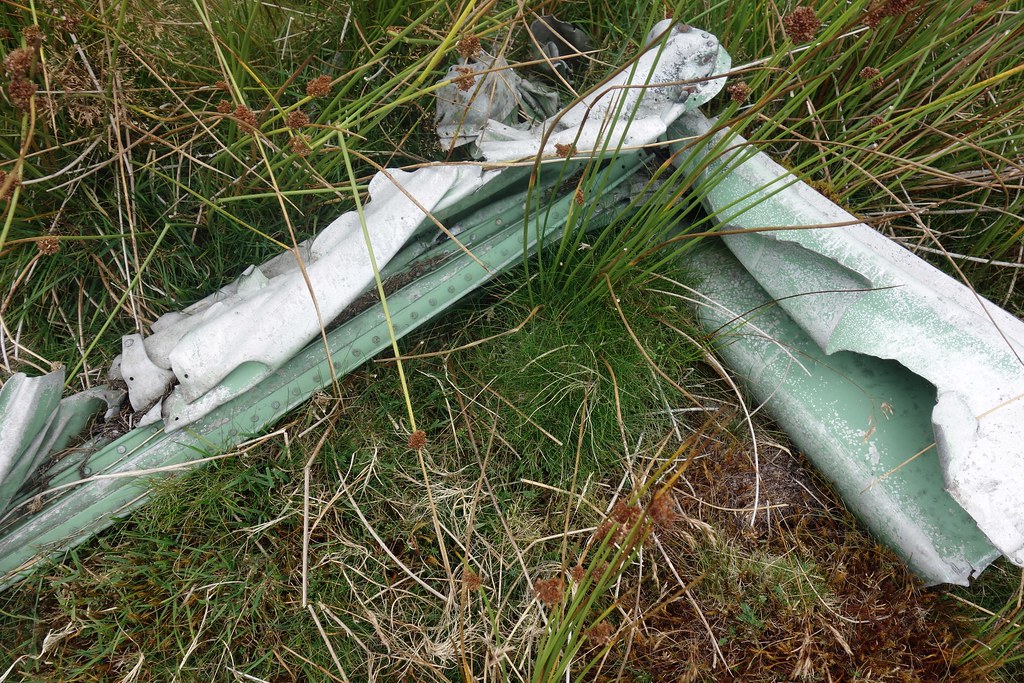 2. REPUBLIC P47-D THUNDERBOLT 42-75101
Republic P-47D Thunderbolt 42-75101 of the 495th FTG USAAF, crashed on Mynydd Copog near Dolgellau on the 4th May 1944. The pilot was performing authorised aerobatics and local flying from Atcham near Shrewsbury, he had flown west across mid Wales and during a series of rolls drifted over higher ground. He lost control of the aircraft which entered a spin, he managed to recover from the spin but had insufficient height to regain level flight before the aircraft struck the top of the hill and broke up. It nows lies alongside the edge of a forestry plantation. Seen here are the remains of the Pratt & Whitney R-2800 Twin Wasp engine. 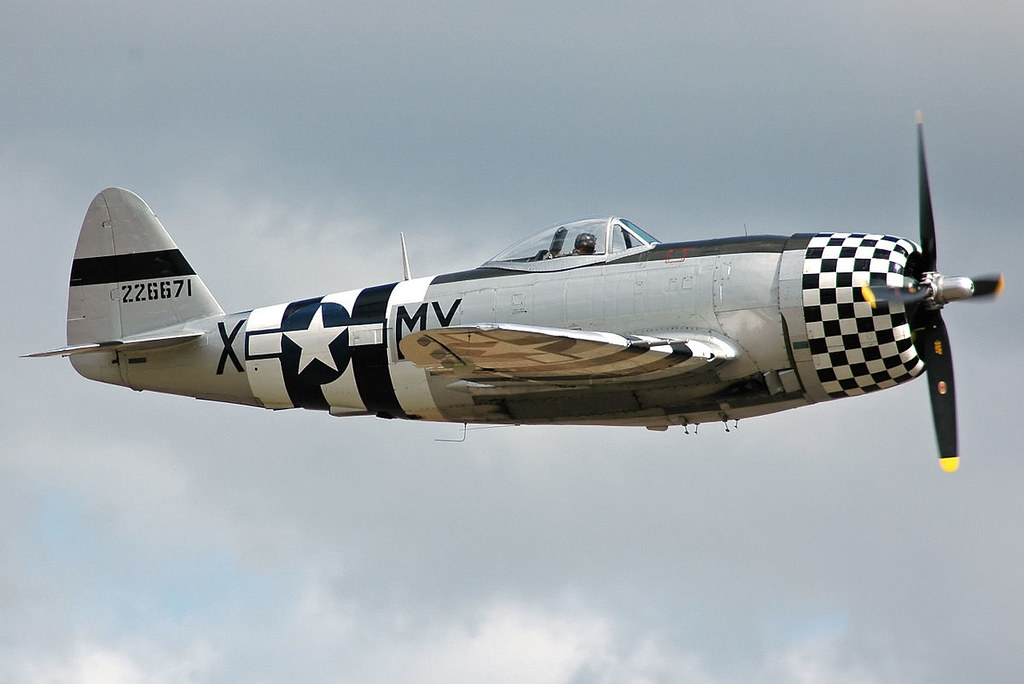 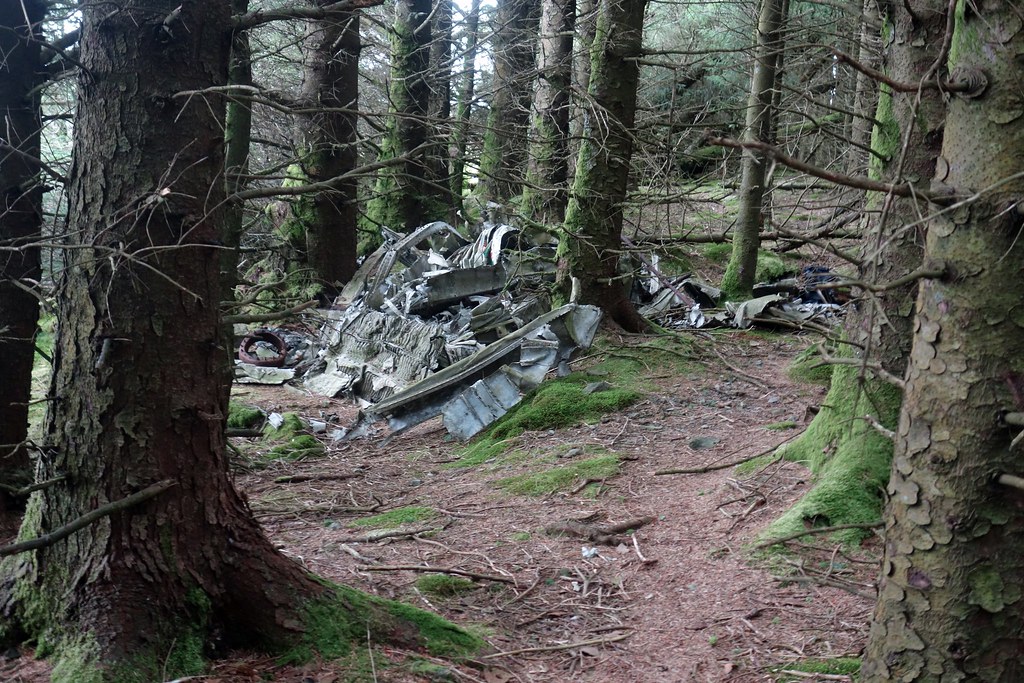 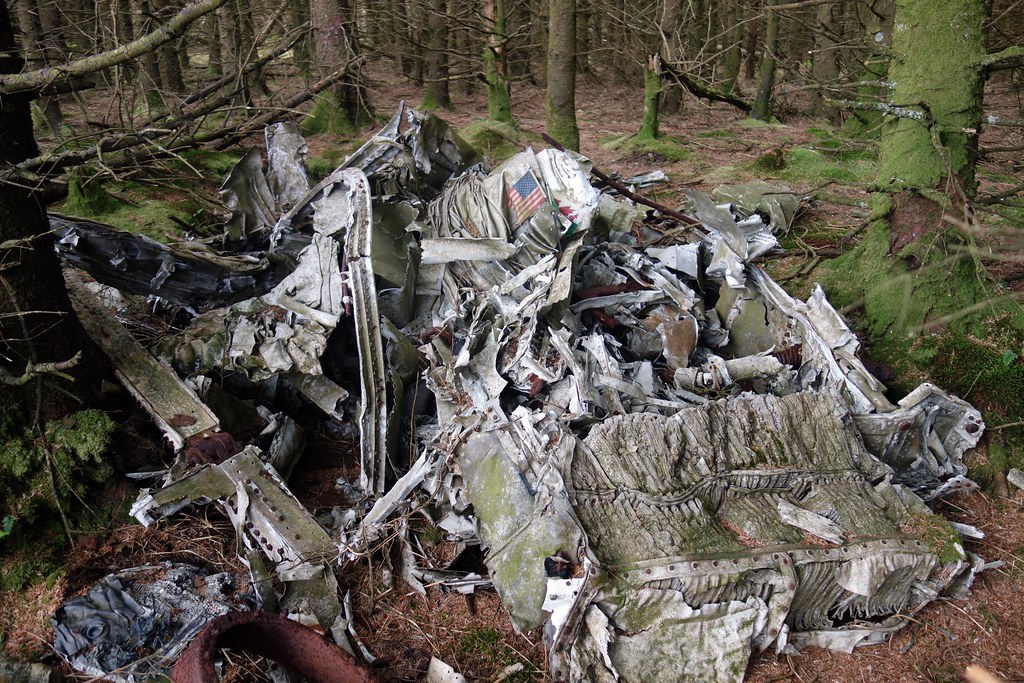 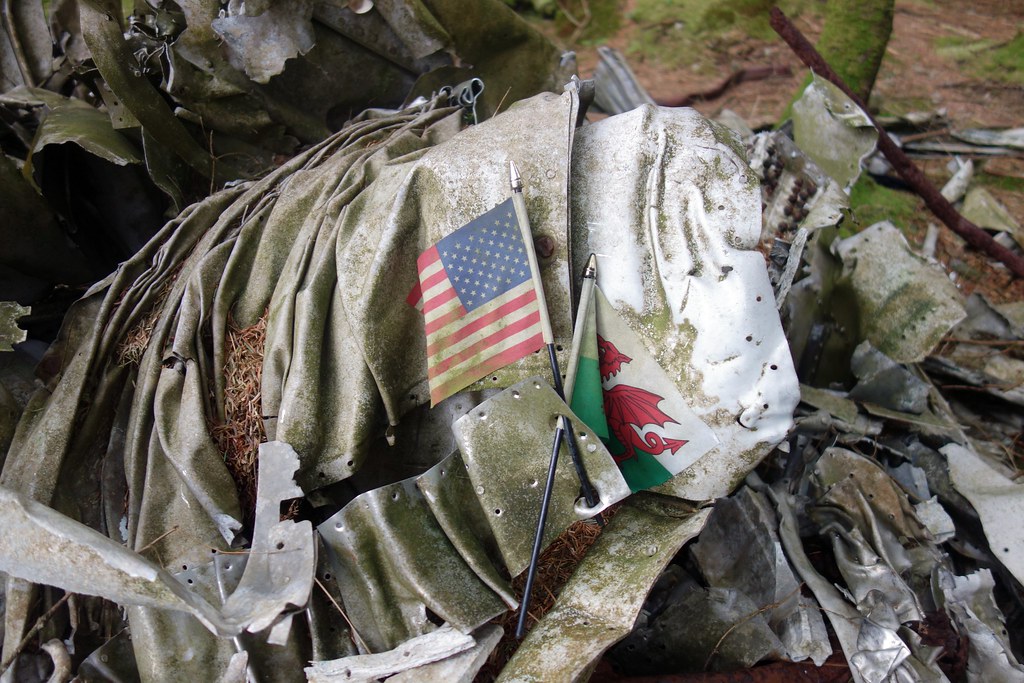 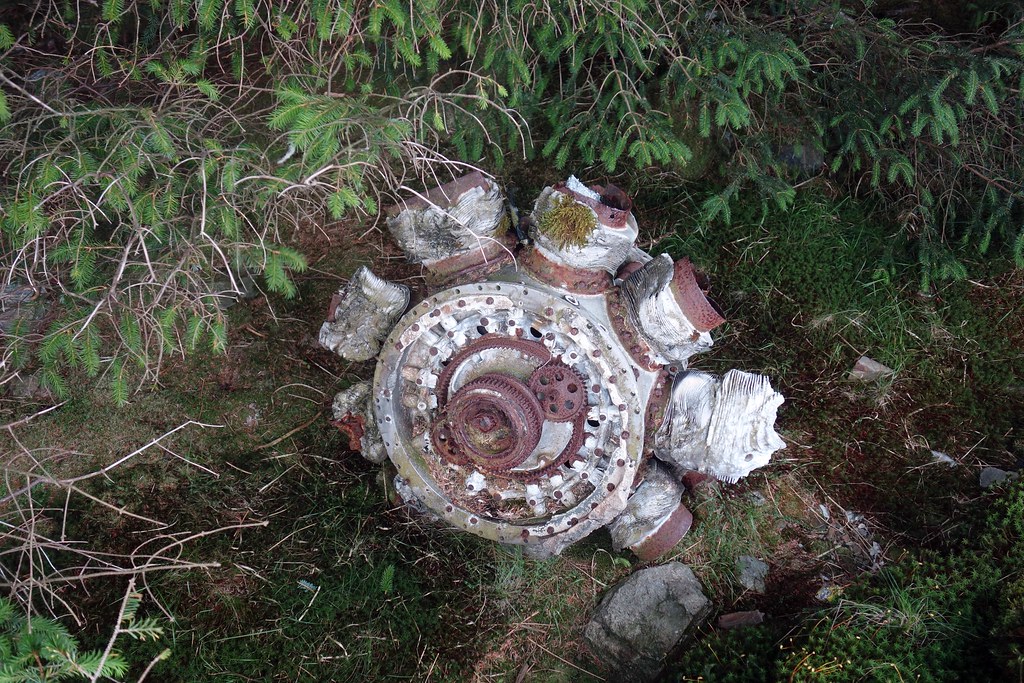 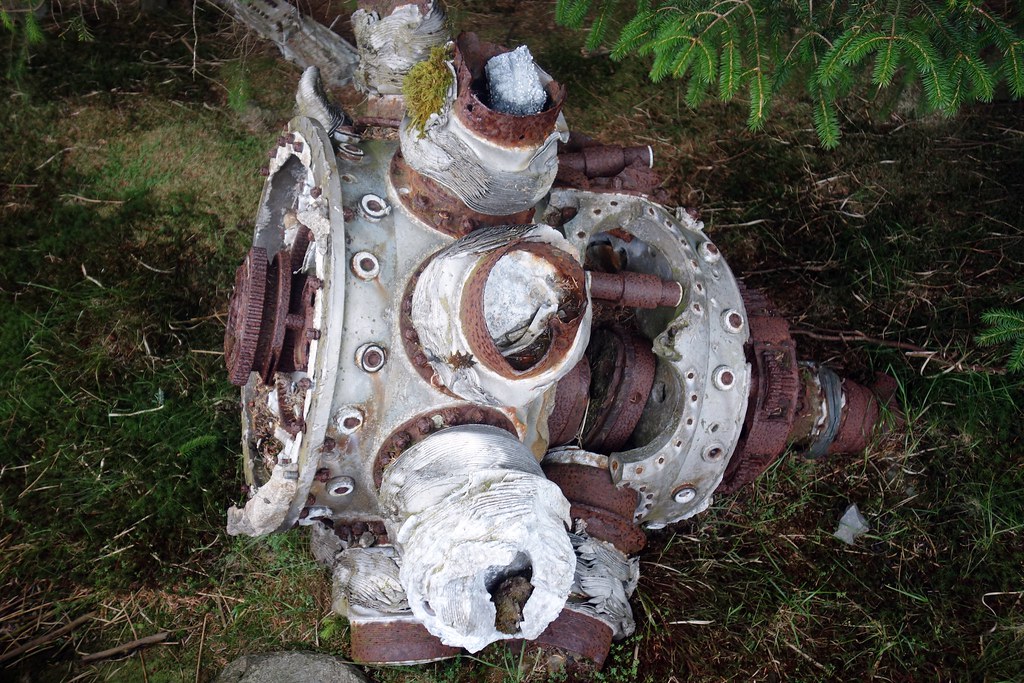 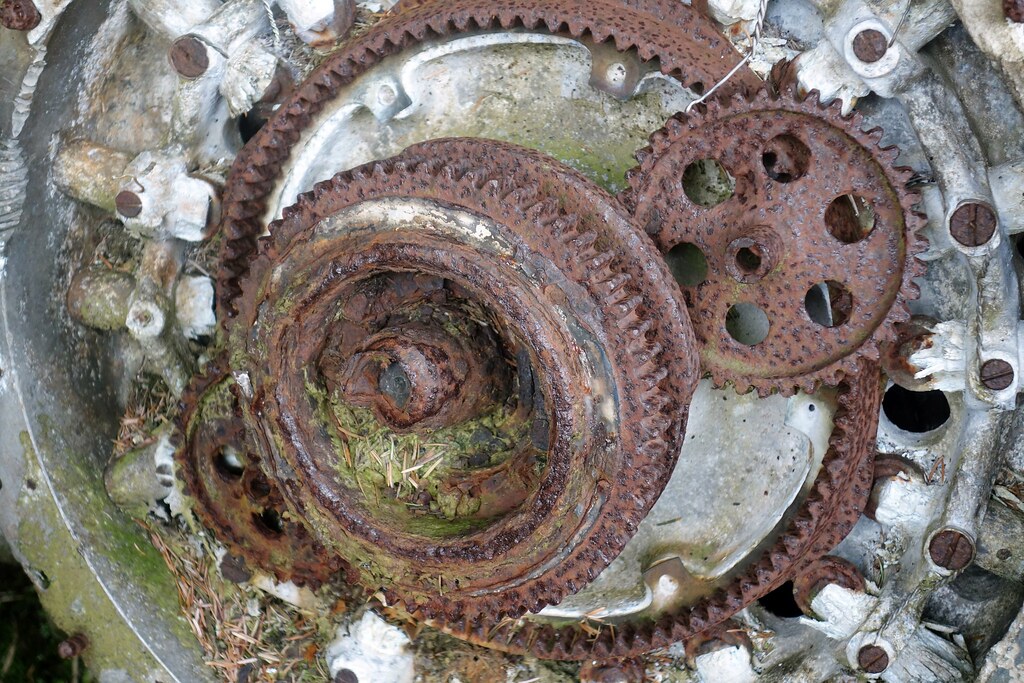 Training the next generation... 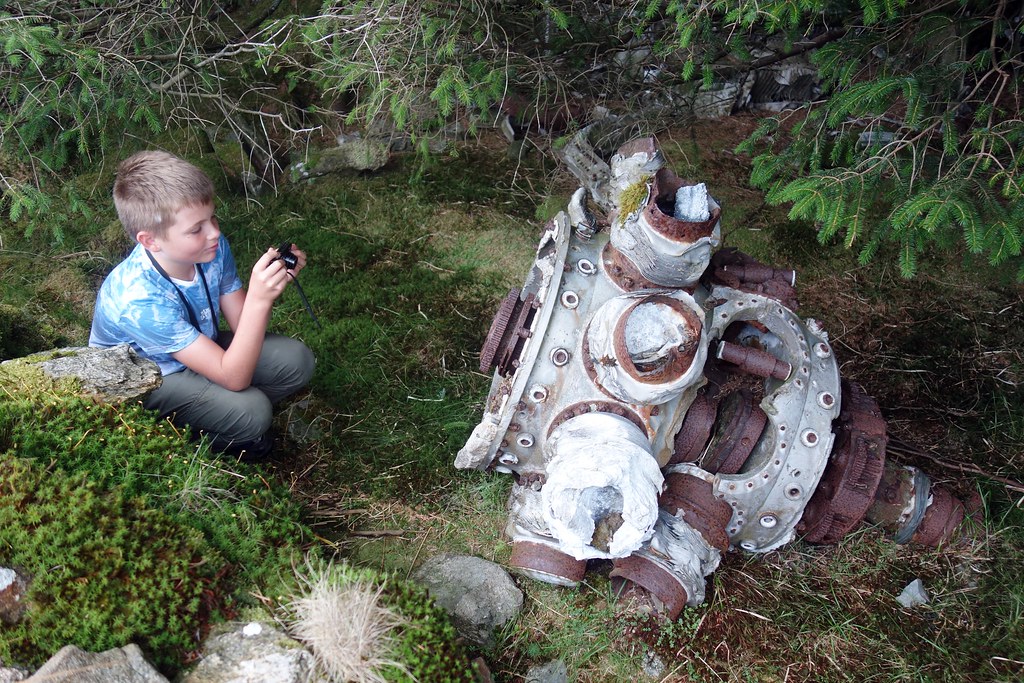 The oxygen cylinder that would had once been behind the pilot in the cockpit and with the labels on it still legible is said to lie deeper within the plantation. We spent an hour looking for it with no joy. I can assume that somebody has swiped it. We did find small bits of wreckage up to 150m into the forest. 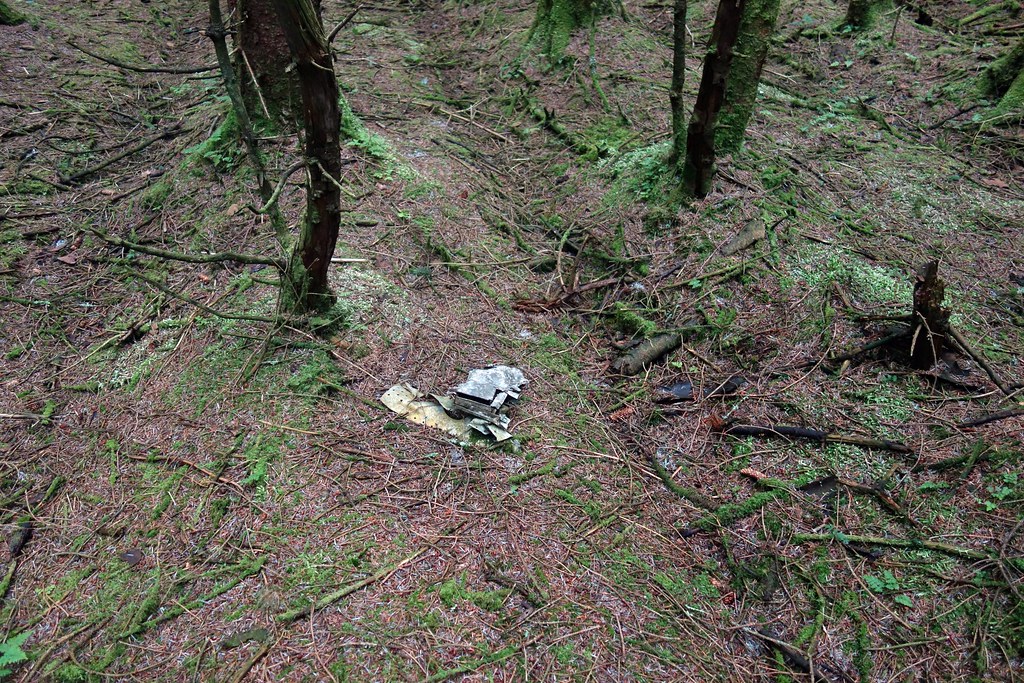 3. GRUMMAN AVENGER Mk.1 FN821
Of the No.848 Naval Air Squadron and crashed on Trum y Fawnog on the 3rd February 1944. As of a few years ago was said to have been lying deep in a forestry plantation that was planted in the 1980s. Had caused issues among the aviation enthusiasts community as somebody had been doing unauthorized and illegal digging here without the appropriate license from the MOD. Well on my visit, the site has been cleared of the matured trees, and the ground landscaped and replanted. No trace of the wreck could be found. Could be that the forestry people had destroyed the whole plane.

Finally what we saw at CAD West/East: passes by of USAF F-15 Eagles and F-16 Falcons and RAF passes of the Eurofighter Typhoon FGR4 and Tornado GR4. Not bad only had to sit for 4 hours to see all that. Apparently it's possible to sit on that hillside all day and not see anything (the RAF does not publicly advertise in advance precise and detailed flying information). 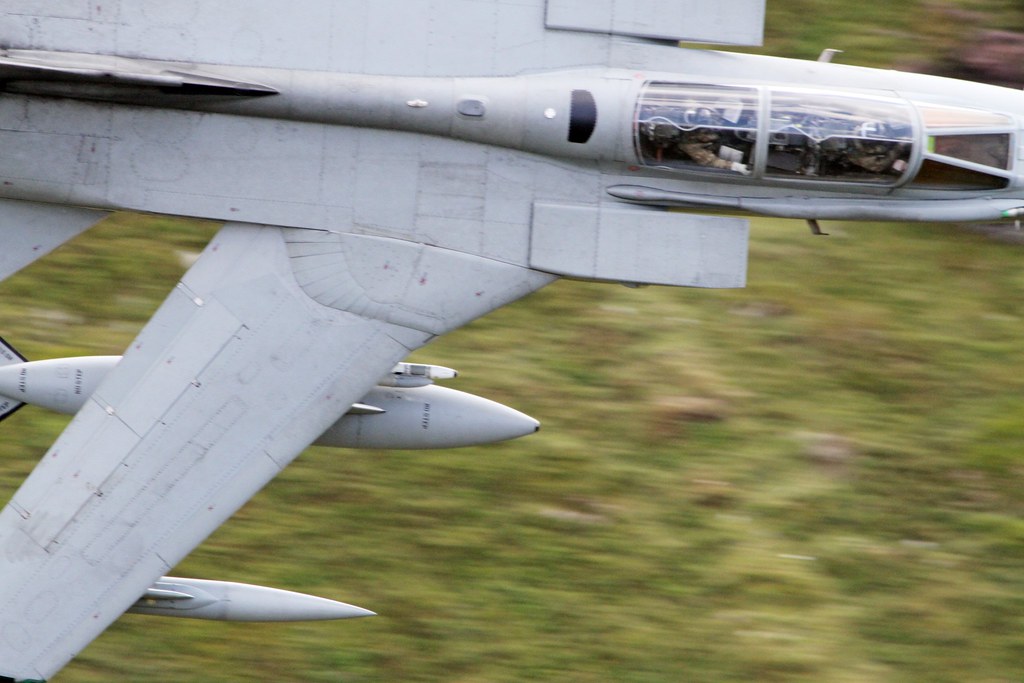 And the Eurofighter Typhoon FGR4 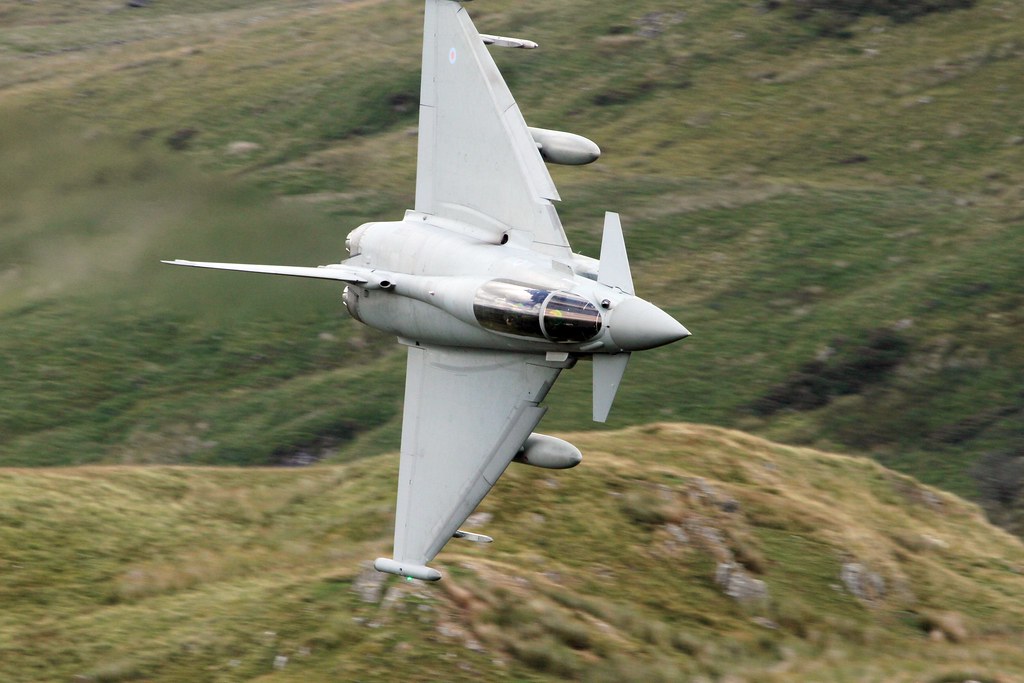 Regular User
Really interesting (fascinating actually) report Berty, I think I am going to check out those other crash sites!
Your Lad could do a lot worse than a career in the RAF I reckon.
Myself and Lenston Did try to organise a little meet / camp over at cadwest but it ended up being just me and Lenston :), however we have been a few times since and on one occasion sat there all day and saw nothing, but how lucky were you and your Lad to see all of those different fast jets....envious here

Regular User
That wreck of the Thunderbolt lying there is fascinating with the tree growth around it - and one I'd quite like to see for myself.
I'm not from Birmingham.
I don't know where 'Hunters House' is.​

Regular User
Nice work once again mate, great bit of history there. And you clearly have ninja like reflexes getting those last two shots!

Regular User
@The Kwan I am aware of more than a 100 plane wrecks in Wales with extant wreckage, of which I have visited 27 this year - but that really is it from me for this year at least. There will be some much closer to where you live than the ones I have done. A mountain pass called World's End near to Wrexham sounds close to you and has several wrecks. Seek for a book called "Aircraft Wrecks - a walkers guide" to gain the grid references, but note that the listed grid references in that book are often out by a few hundred metres.

The website Peak District Air Accident Research documents over 500 plane wrecks in the UK (but does not list grid references) and it seems that the webmaster on that site has visited them all over the last 20 years! As some of my sites do not feature on that website, I have sent him an email allowing him to put my reports/photos onto his website in order to consolidate everything together into one place.
Mr Bertie Bollockbrains
An idiot

Regular User
Cheers for the info Bertie, I know worlds end but not about the wrecks, I will check out the book :)
United cavers exploration team

The Kwan said:
Cheers for the info Bertie, I know worlds end but not about the wrecks, I will check out the book :)
Click to expand...

28DL Full Member
What a fascinating bit of history, thanks.
M

28DL Full Member
Thank you for the excellent report. So sad for the crew of the two aircraft even if it was many years ago. Great photos of the Tornado and the Typhoon.
You must log in or register to reply here.
Share:
Facebook Twitter Reddit Pinterest Tumblr WhatsApp Email Link