The healing powers of the mineral springs of Tskaltubo were reportedly discovered as far back as the 13th century by local shepherds. In 1870 The first bathhouses were opened, and in 1925 under Soviet rule the first sanatoriums (or sanatoria if you prefer) and in-patient facilities were constructed. By 1931 Tskaltubo had been designated as a balneotherapy centre and spa resort, becoming one of Joseph Stalin’s favourite holiday destinations. 19 hotels and sanatoriums were built in a ring around a central park where the thermal springs and 9 bathhouses were located.

During the Second World War the resort’s hotels were used as hospitals, but Tskaltubo’s popularity as a therapeutic and leisure destination peaked during the post-war era. The Russian constitution included a ‘right to rest’, which often meant mandatory orders to recuperate at a spa resort somewhere within the USSR, such as Tskaltubo. At its peak the number of visitors exceeded 1,500 a day and 100,000 a year, with up to 4 trains arriving daily from Moscow and elsewhere in the Union.

In 1991 Tskaltubo’s spa industry was decimated by the wholesale collapse in visitor numbers which followed Georgia’s declaration of independence in April 1991, and the dissolution of the remainder of the Soviet Union in December of that year. Almost all hotels and sanatoriums were forced into closure, and inevitably fell into decay.

The 1992-1993 war in the nearby Russian-backed breakaway state of Abkhazia resulted in over 200,000 predominantly ethnic Georgians fleeing that region to Georgia, where they were offered shelter as ‘Internally Displaced Persons’ or IDPs. It is estimated that around 8,000-9,000 of the refugees were offered “temporary” accommodation in the deserted hotels and sanatoriums of Tskaltubo. But over a quarter of a century later, many of those families still live within the buildings’ crumbling sprawl, often without running water, a scarce and sporadic electricity supply, and cooking facilities mostly limited to a solitary portable gas burner.

Whilst the future of Tskaltubo and its residents is still uncertain, there have finally been some seemingly positive developments in the past few years. Ambitious plans have been drawn up, seeking investment and renovation. Several sanatoriums, including Iveria, have recently been purchased and some redevelopment has started. Just how successful these new enterprises are, and how they ultimately affect the local population, remains to be seen.

Given the troubled history I have outlined above, I would like to make clear that our group were at pains to make sure that during our visit to Tskaltubo we were quiet and respectful to all local residents, including the IDPs still living in some of the buildings. We kept only to the parts which were completely abandoned, but exchanged many waves and smiles with those locals we did encounter along our way. One highlight of the day was showing some curious residents the screen with the live feed from my drone as it soared high above the derelict sanatorium that some of them called home – this resulted in much laughter, smiles and hand shakes all round. This was typical of my experience throughout my time in Georgia – a people who might at first sight appear somewhat stern or taciturn, but who were quick to burst into broad smiles when given a friendly “hello”, and incredibly warm and generous in their hospitality. In fact too much so when it came to homemade moonshine wine...

We were lucky to get to pay a brief visit to this former sanatorium, as it has recently been purchased by a developer and had a guard stationed outside. The main draw was the beautiful central staircase, featuring a large hole on either level – presumably once protected by bannisters which have long since been removed and used for firewood. 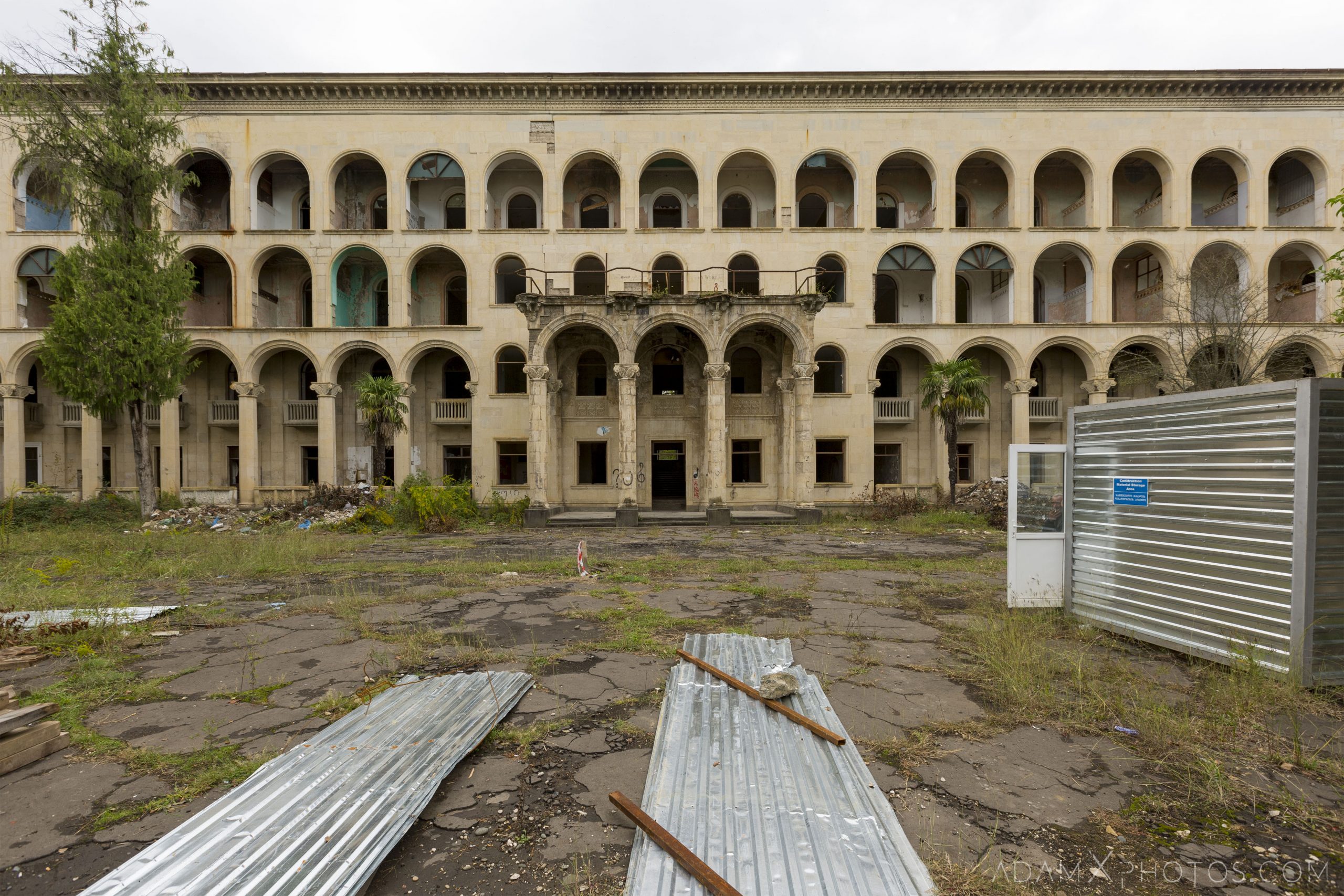 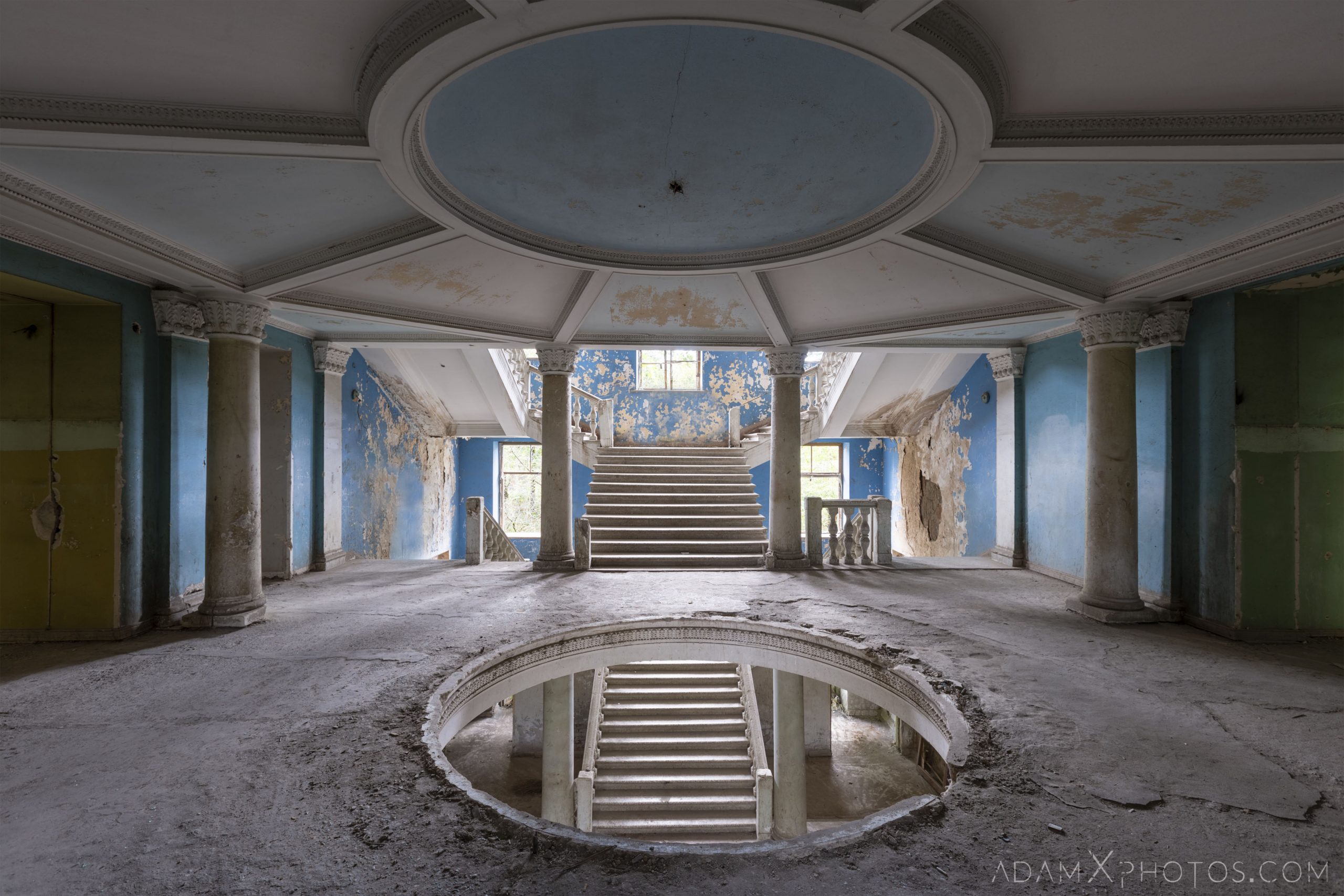 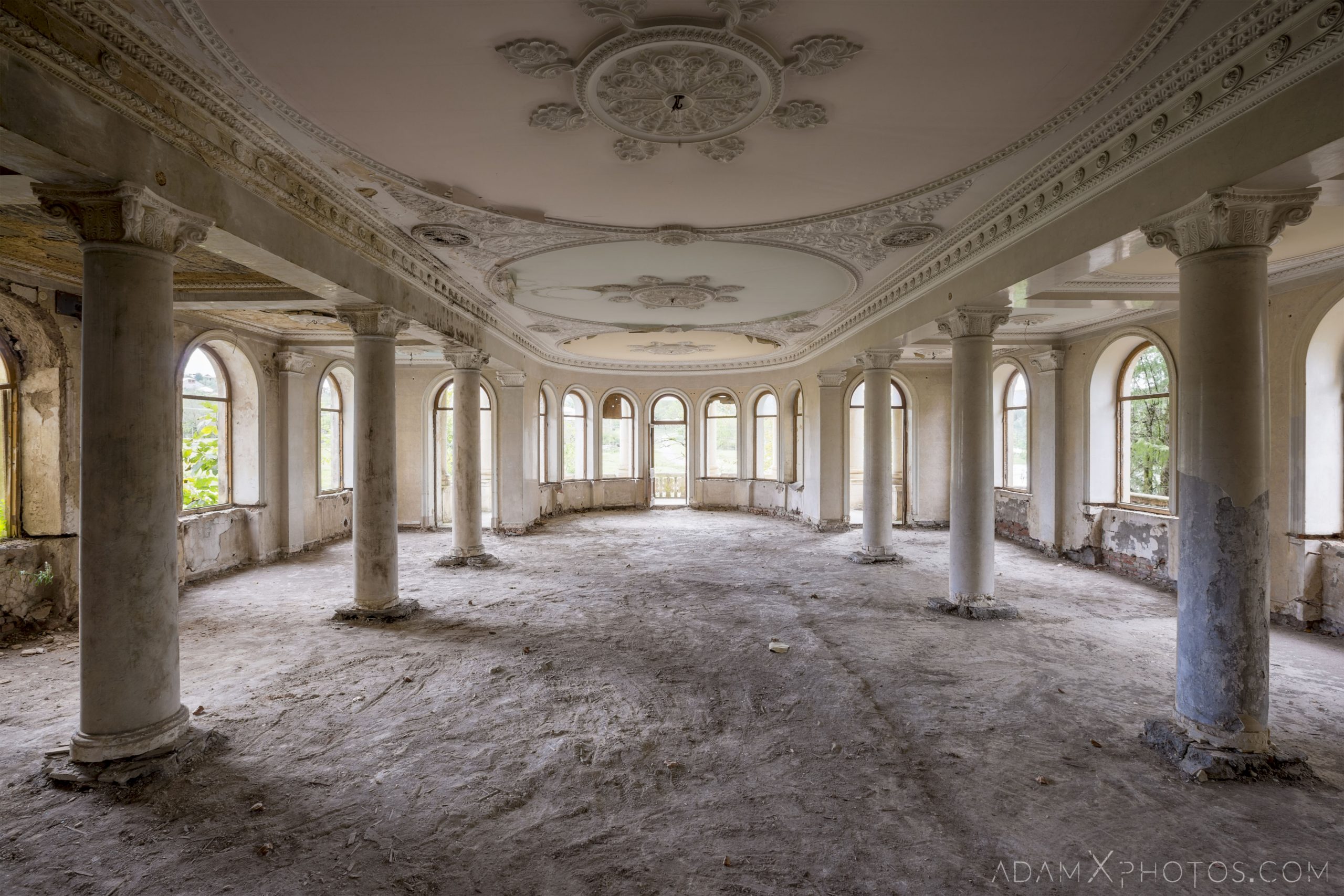 Our second sanatorium was this vast beauty, which still has a few IDPs living in one part. I began by taking a few drone shots – looking back, something which I’d done with more of the buildings we visited, but we crammed so many locations in to just one day I really didn’t have time. 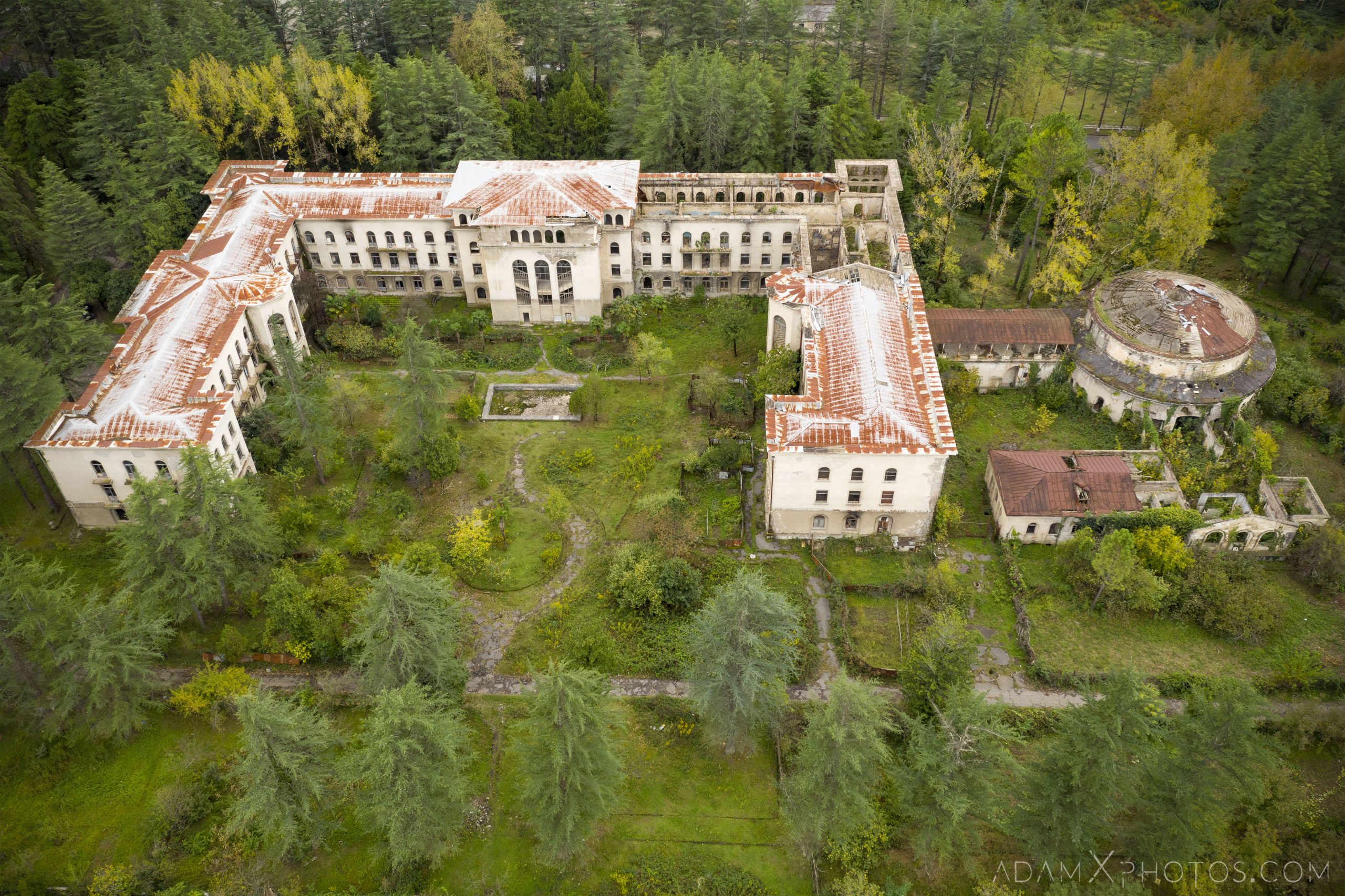 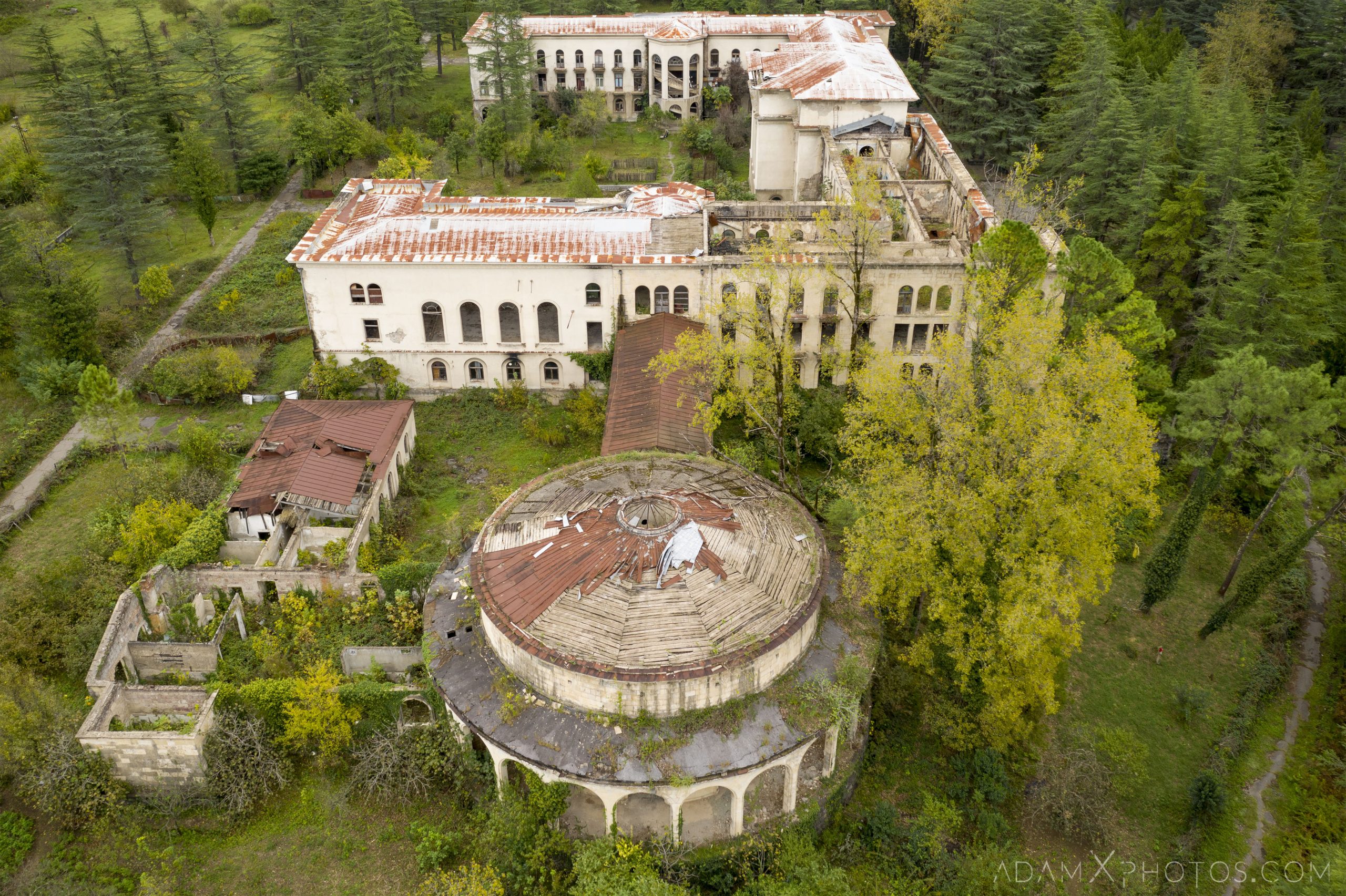 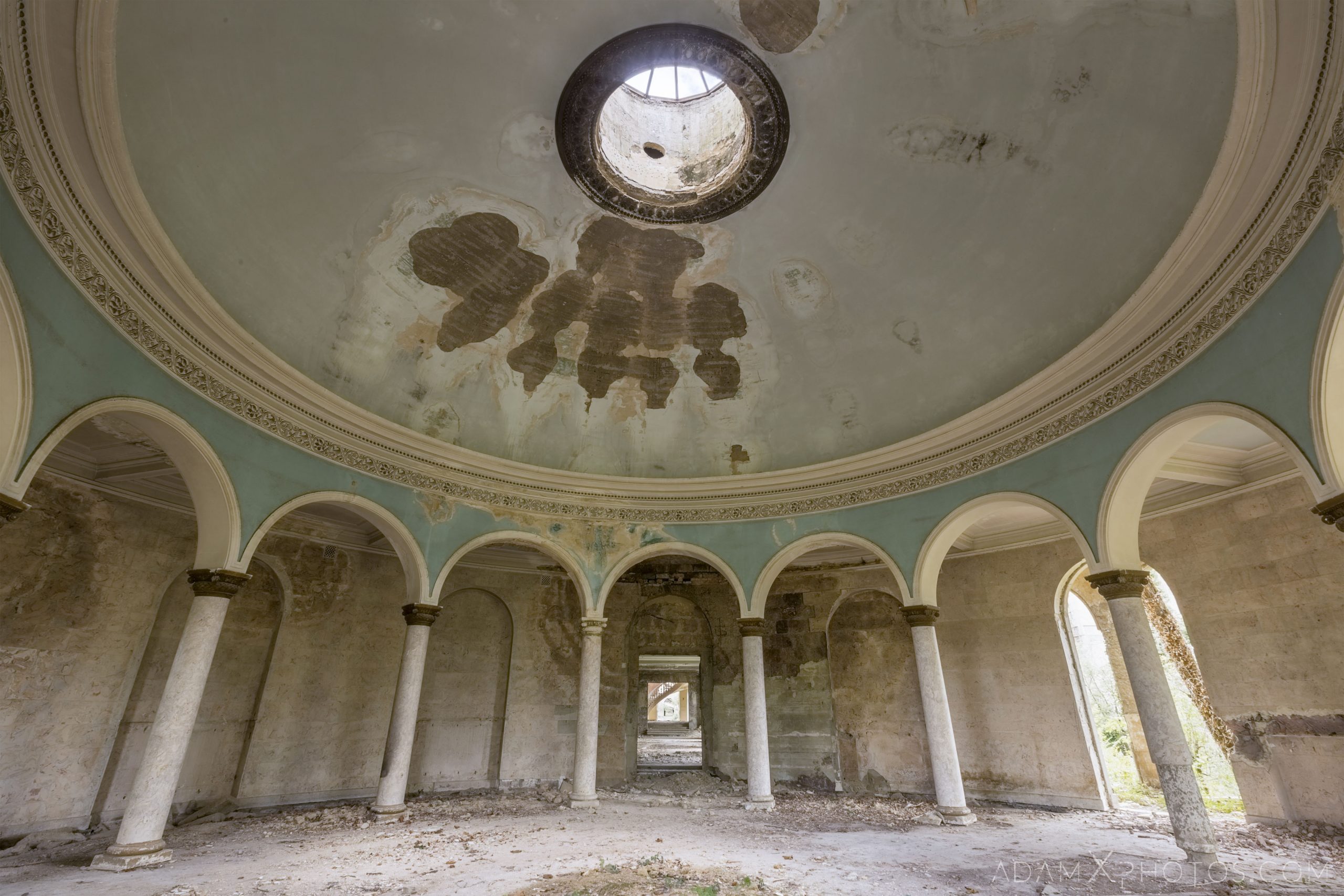 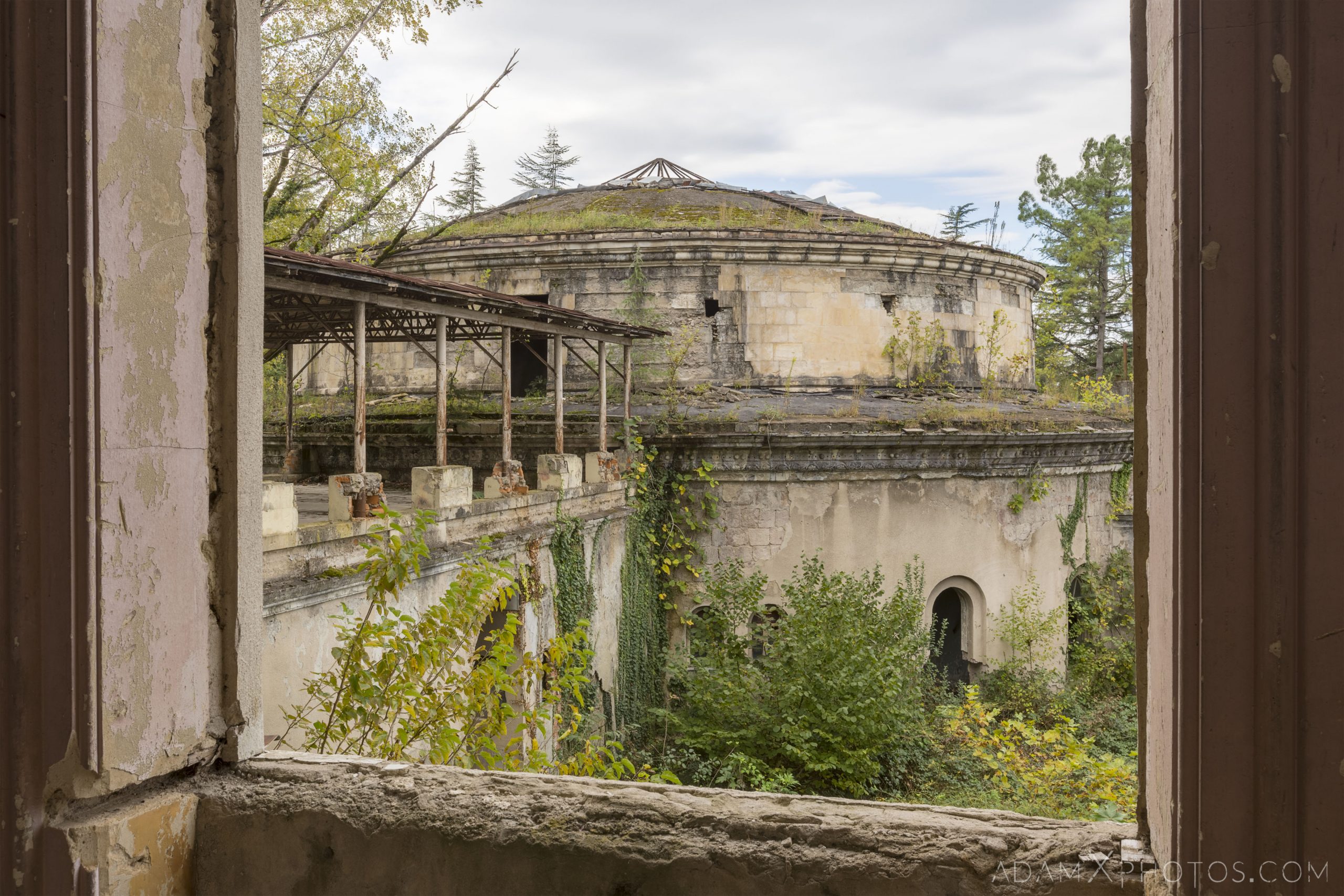 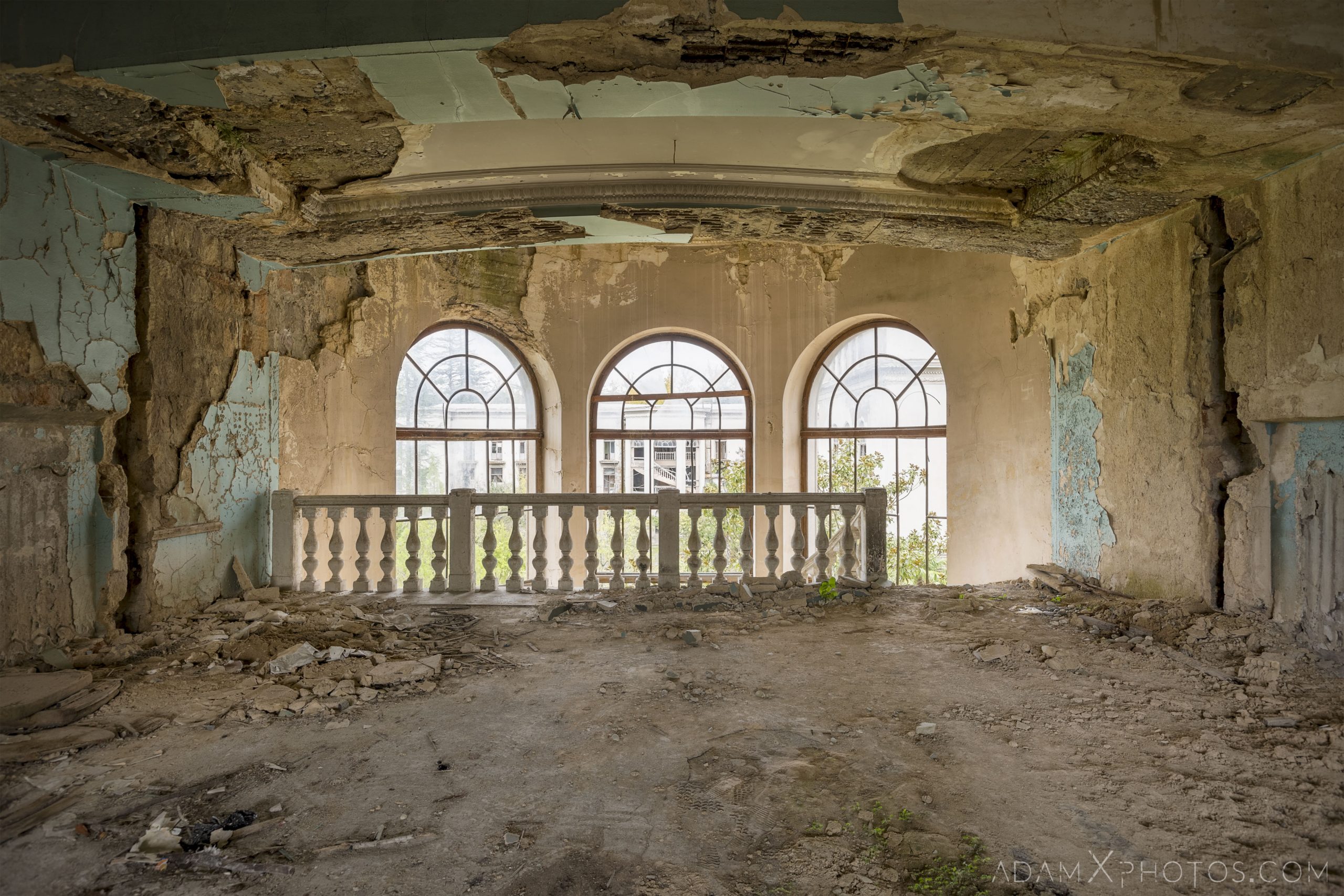 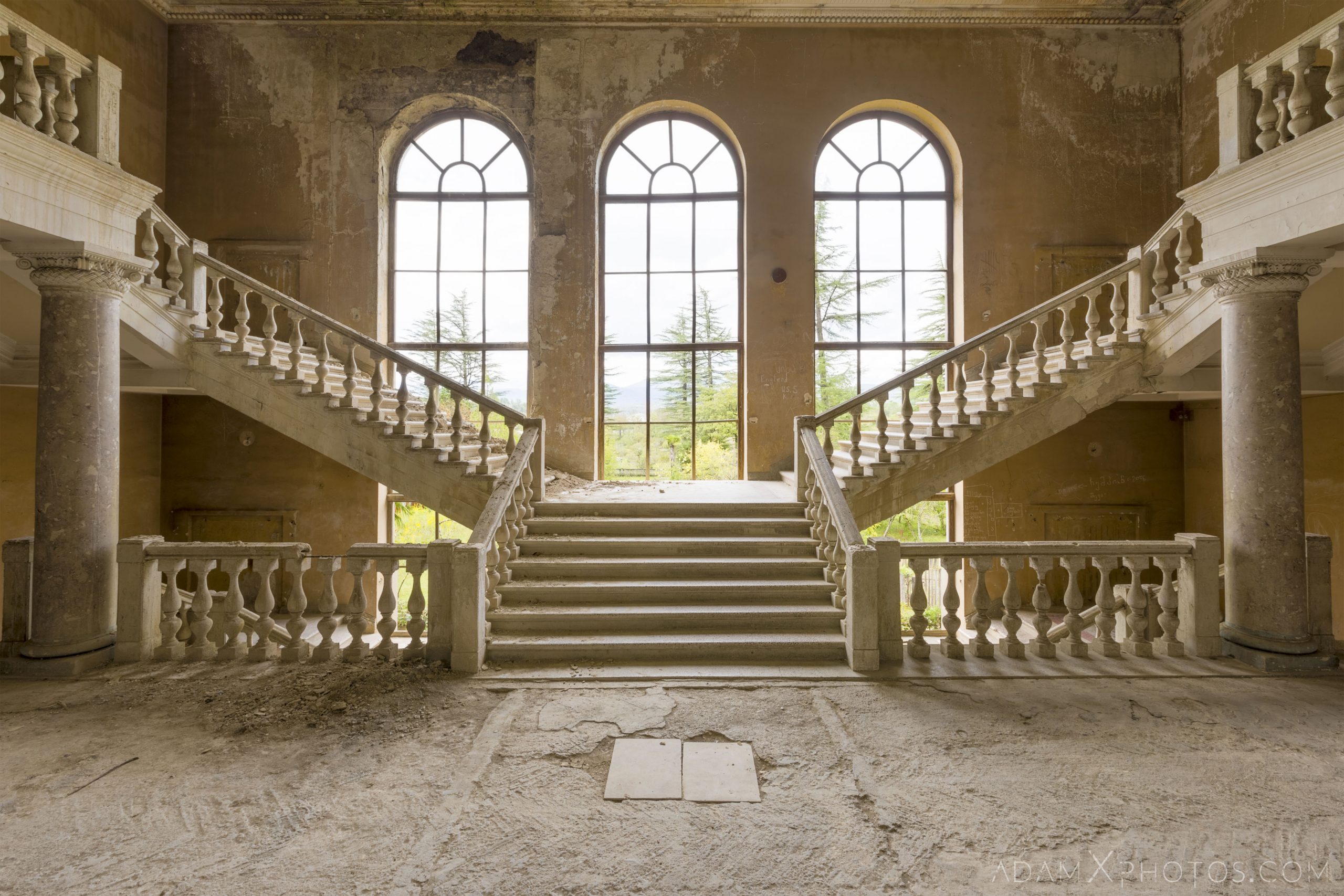 Built between 1954 and 1962, and formerly known as Sanatorium Tsekavshiri, Hotel Medea was a hotel and sanatorium with a capacity of 326 beds. 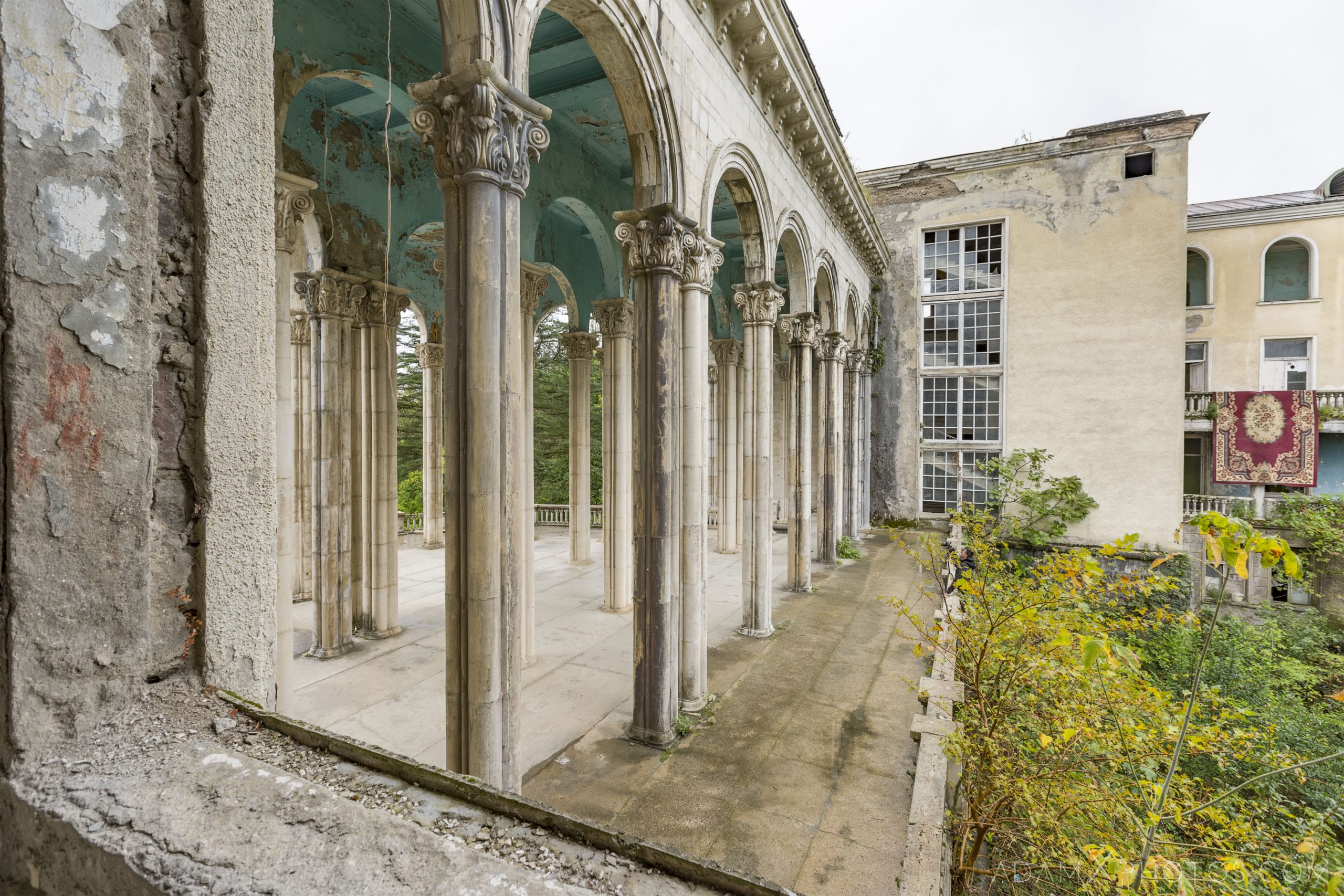 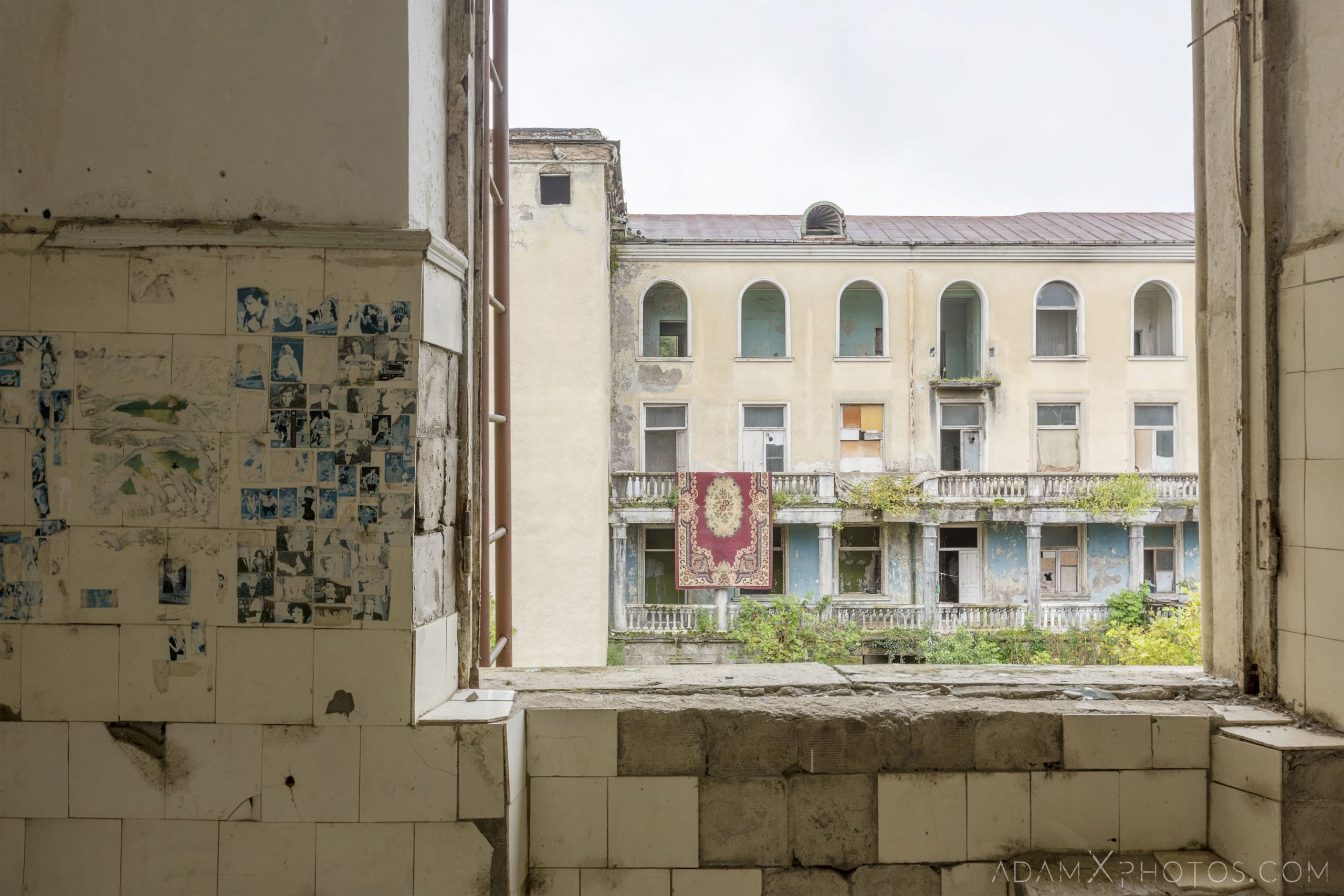 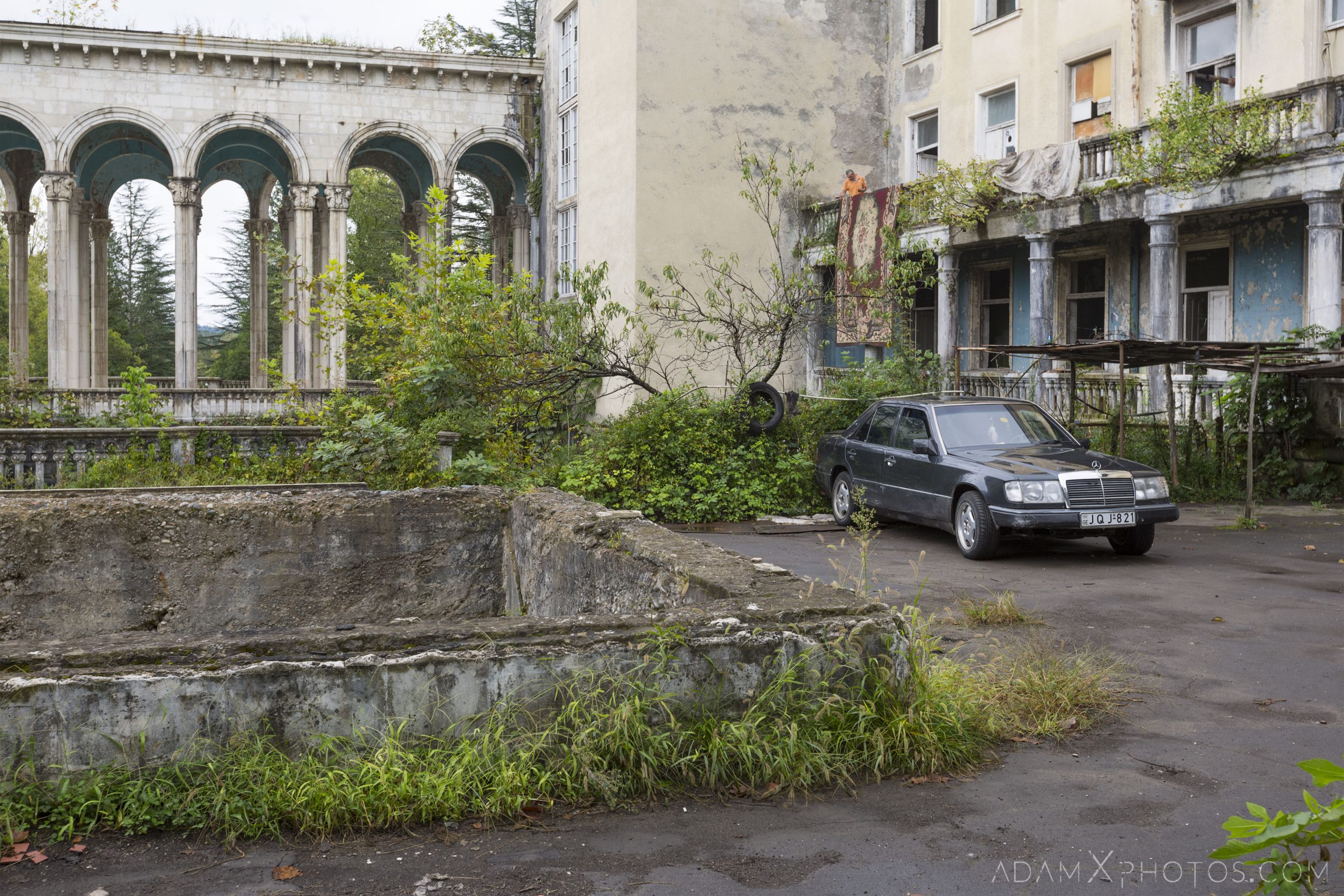 The Stalin-era Hotel Metallurgy was, as the name suggests, built as a resort for Soviet Union metal factory workers. 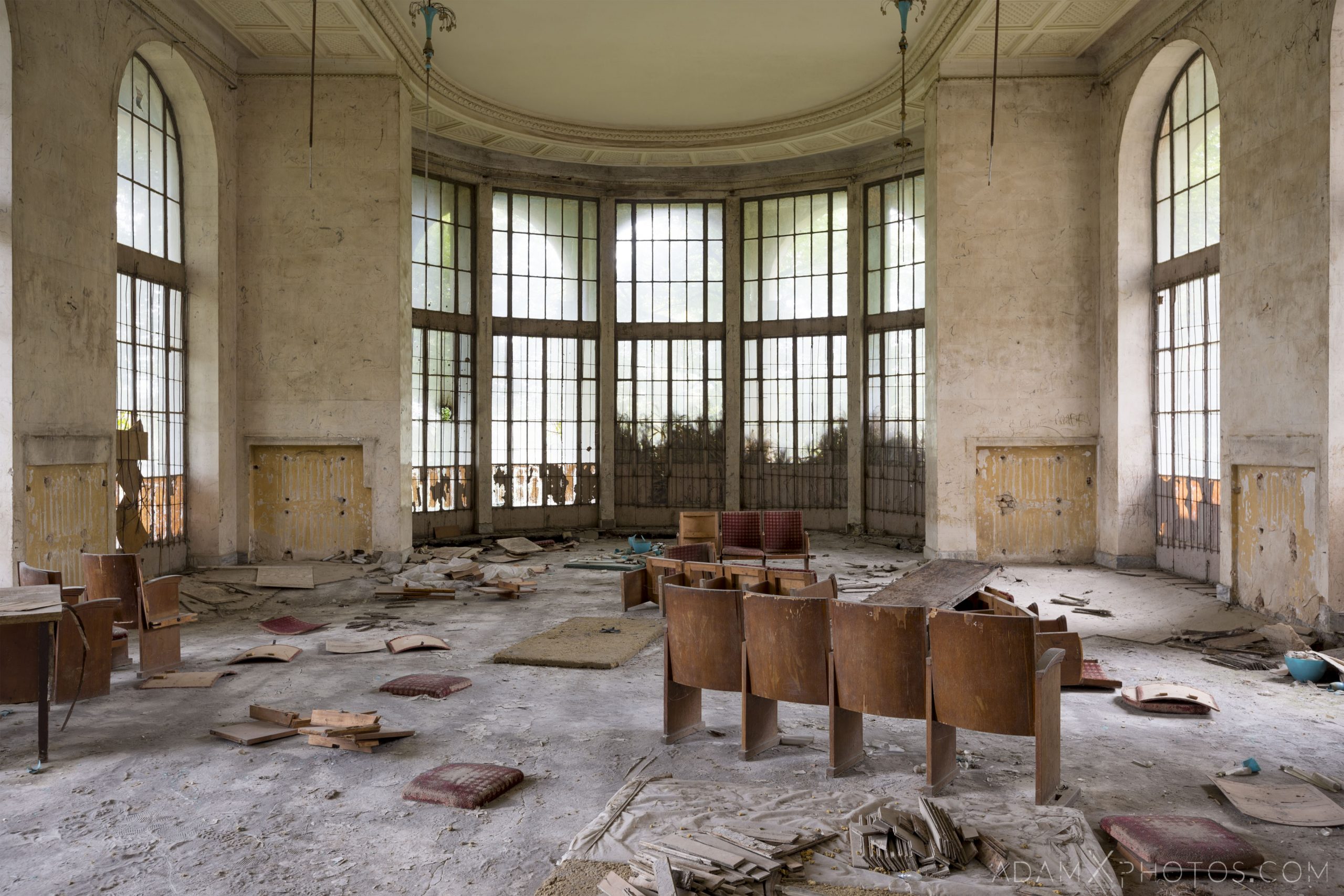 Hotel Tbilisi was one of Soviet-era Tskaltubo’s most popular places to stay, with a capacity of 732 beds in its heyday. Built in the in the early 1950s, further reconstruction and expansion works took place in the 1960s and 1980s. As with many other former hotels, it too still houses IDPs displaced by the 1992 war in Abkhazia. 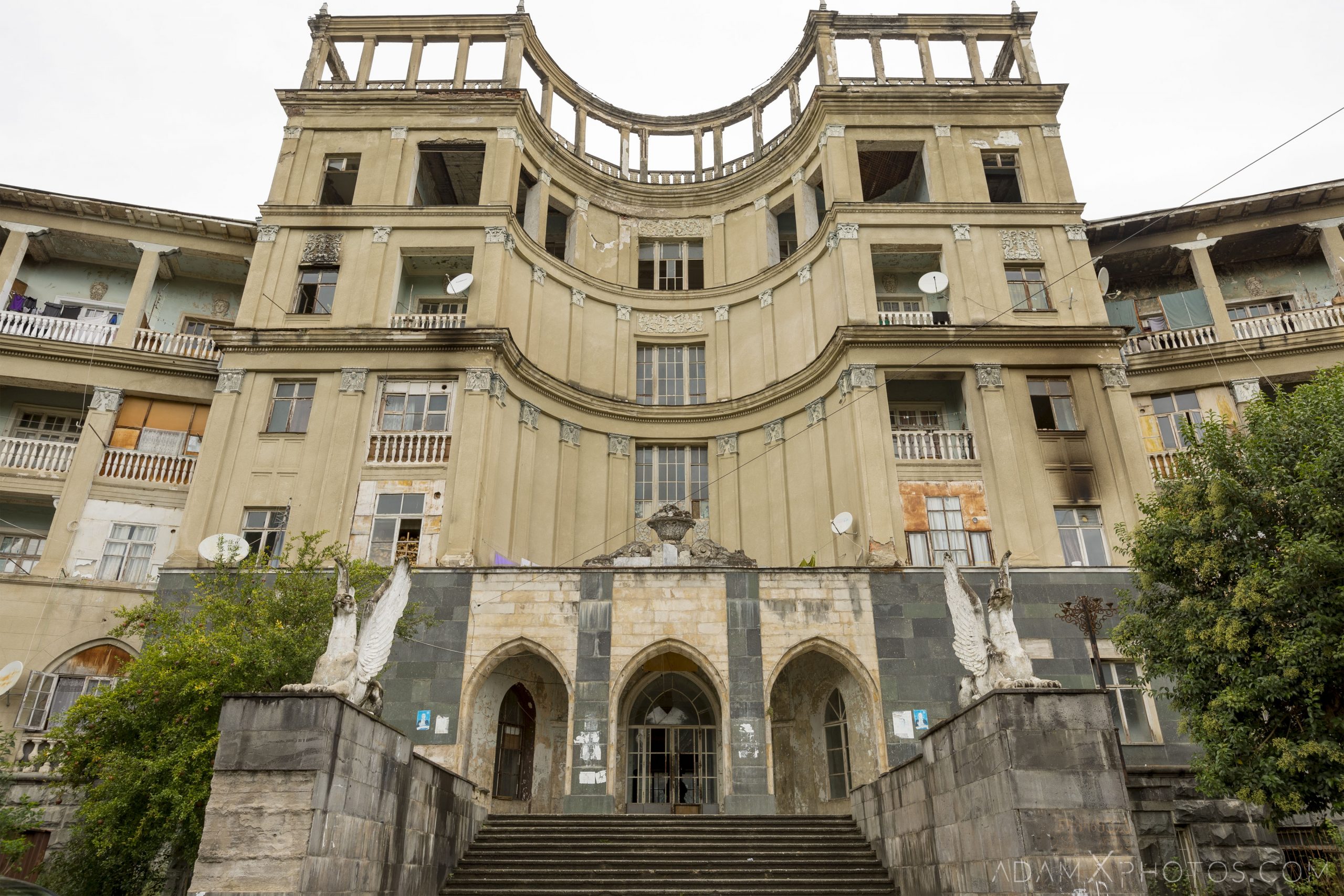 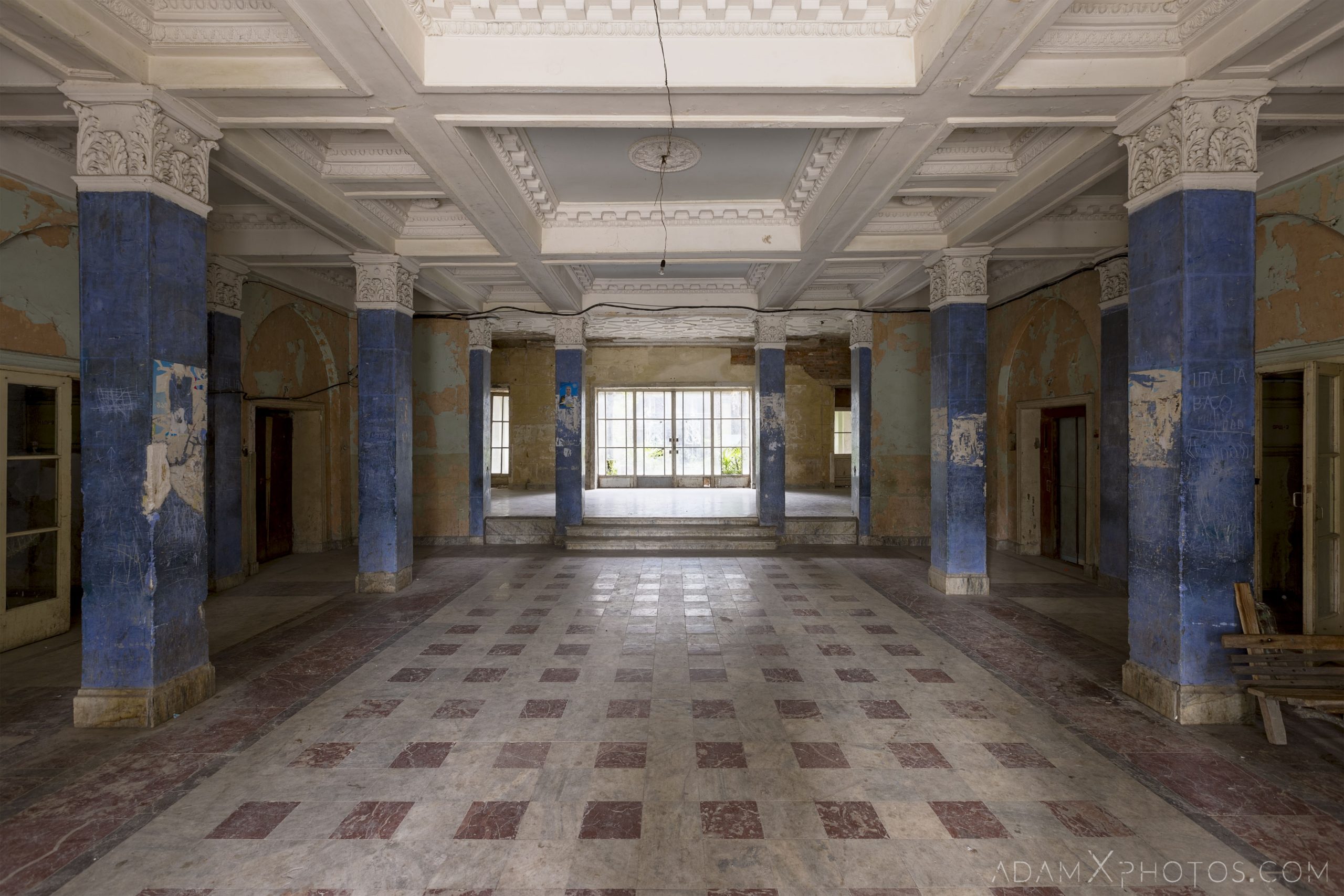 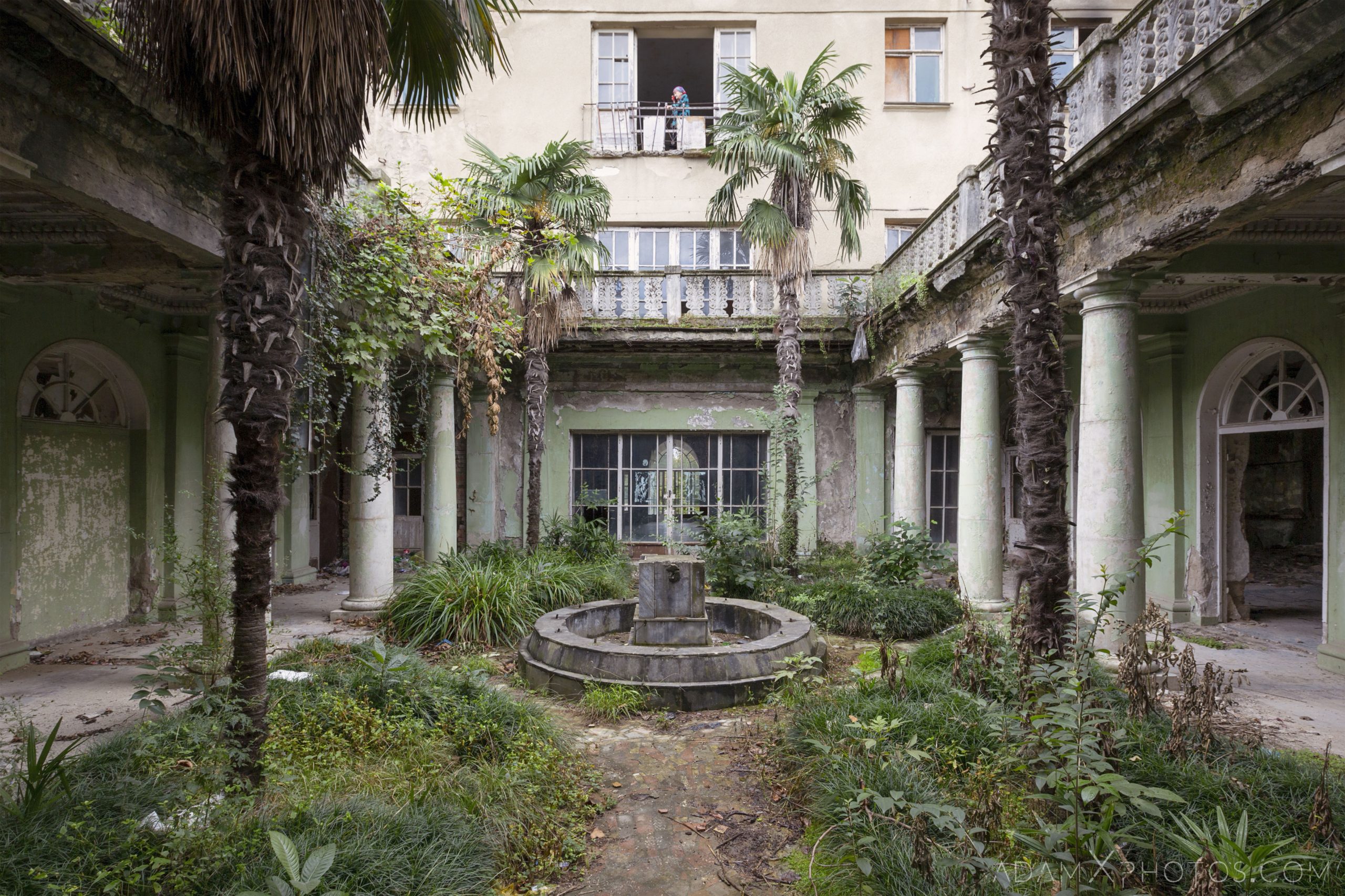 Our final hotel for the day was the impressive Hotel Sakartvelo.

This hotel had a much more brutalist / 1980s Soviet feel to it, and had many more IDP families living there than the other locations we explored. As a result, we kept ourselves only to the stripped and abandoned section, and didn’t stay very long.

The remains of a now ruined pool, with Soviet-era mosaic still intact… In its heyday, Tskaltubo had nine bathhouses located around the central park area. These formed an important part of the ‘balneotherapy’ function of the town – being the treatment of disease and medical conditions by bathing in mineral-enriched water. Thanks for looking - many more shots and reports on my website

Staff member
Moderator
Yummy. Amazing place and some of the most welcoming people I've ever met. Just waiting for that travel corridor to open back up and I'm getting on the first plane!
You must log in or register to reply here.
Share:
Facebook Twitter Reddit Pinterest Tumblr WhatsApp Email Link