Really enjoyed this pre-lockdown mooch with @UrbandonedTeam. Having spent the last few days go through all my photos and footage, it was nice to take myself back to the explore one evening in March. Accessing the site was no issue including all buildings on the land.

The site itself was formerly a dye works under the name of Walmersely Dye Works before Tetrosyl came along and took over the land in the 60s. Tetrosyl is the UKs biggest oil blending company and Europe's largest supplier of car care products. Despite Tetrosyl's expansive global upfront position in the market, higher ups in the company showed significant interest in keeping the headquarters in and around where the business first began so when the time came for re-location around 2014, the 80 employees only moved as far as Rochdale. Luckily, planning permission had been previously granted for the plot of land where the factory stands meaning the money from selling the property would help fund the new HQ. The idea behind moving was that the current buildings were not fit for purpose so they decided build a new and improved main office. By the time we had got there, work had already begun towards the rear of the site and I was made aware from UT that even more had gone when he returned mid-year to film his drone footage. However, the most interesting parts still remained. 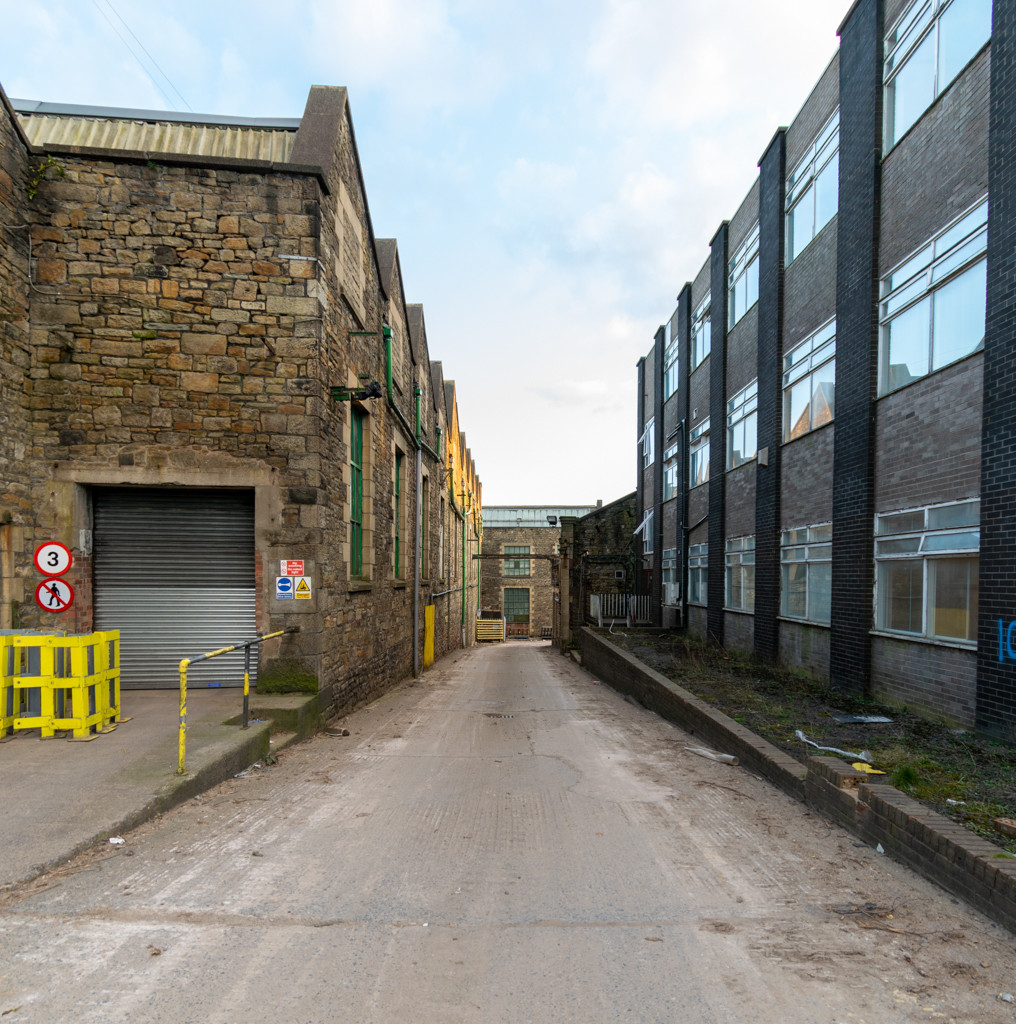 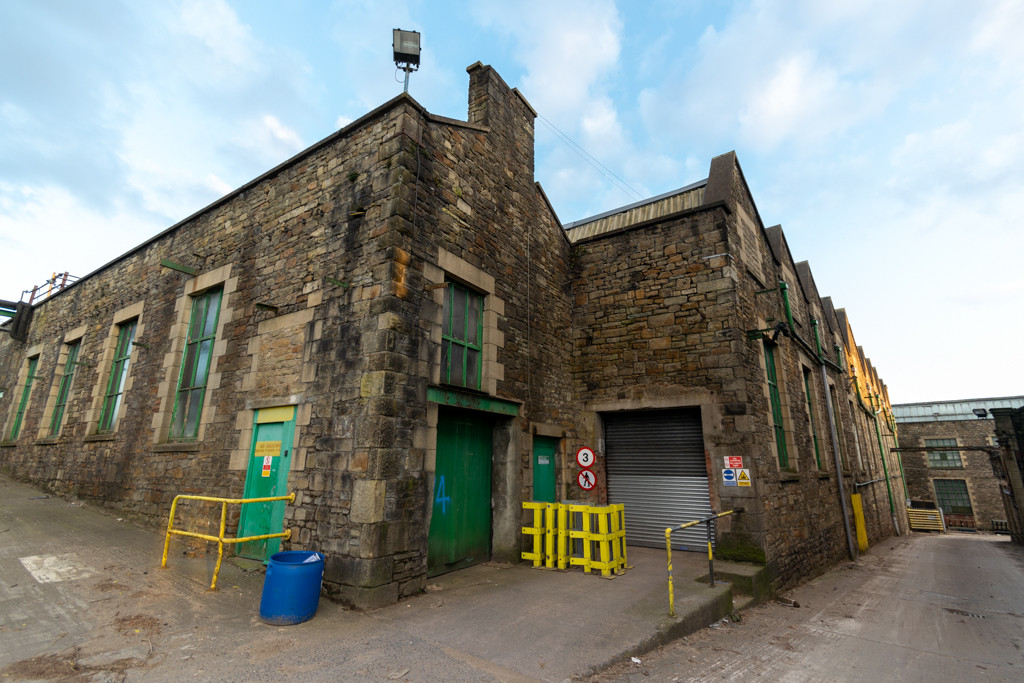 To begin our explore we found ourselves inside the main manufacturing building. Large spaces that were left mostly empty were still photogenic due to the sunlight pouring in complimenting the already yellow structural supports. 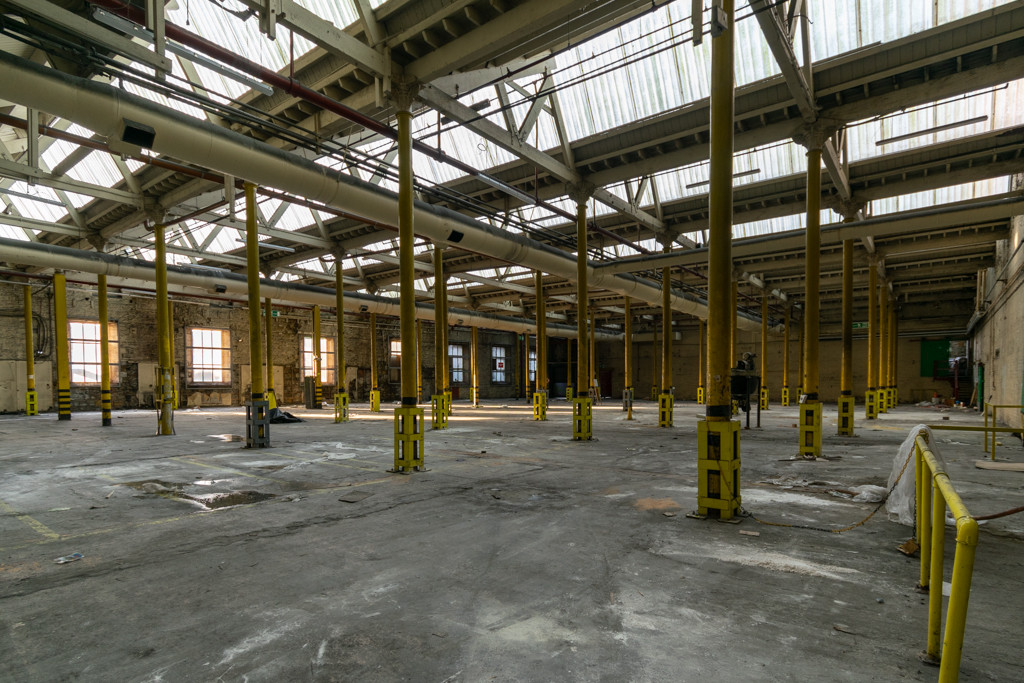 Nearby another empty room this time experiencing a little more decay. 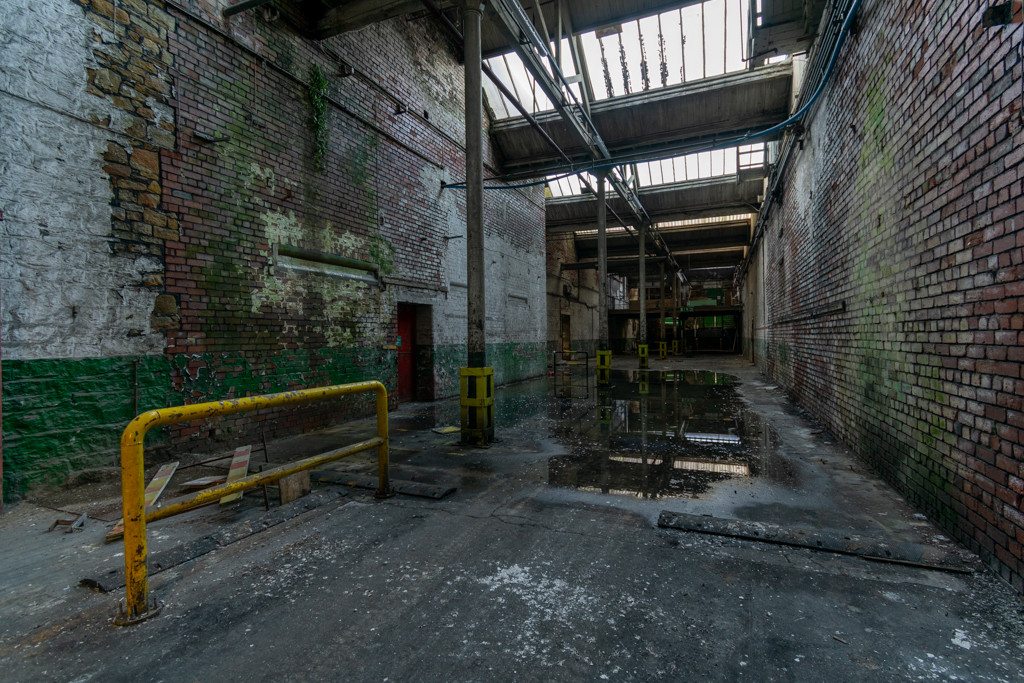 This then lead us into the most interesting room in the manufacturing building. In here we understand car shampoo was being produced thanks to Speed previously pointing it out on UT's report. 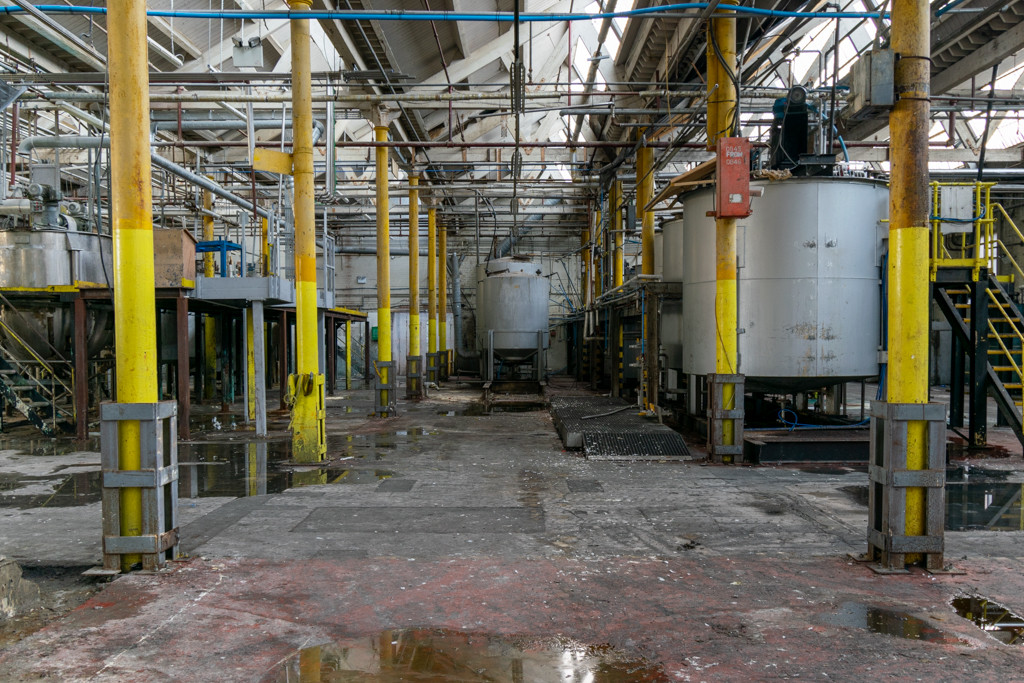 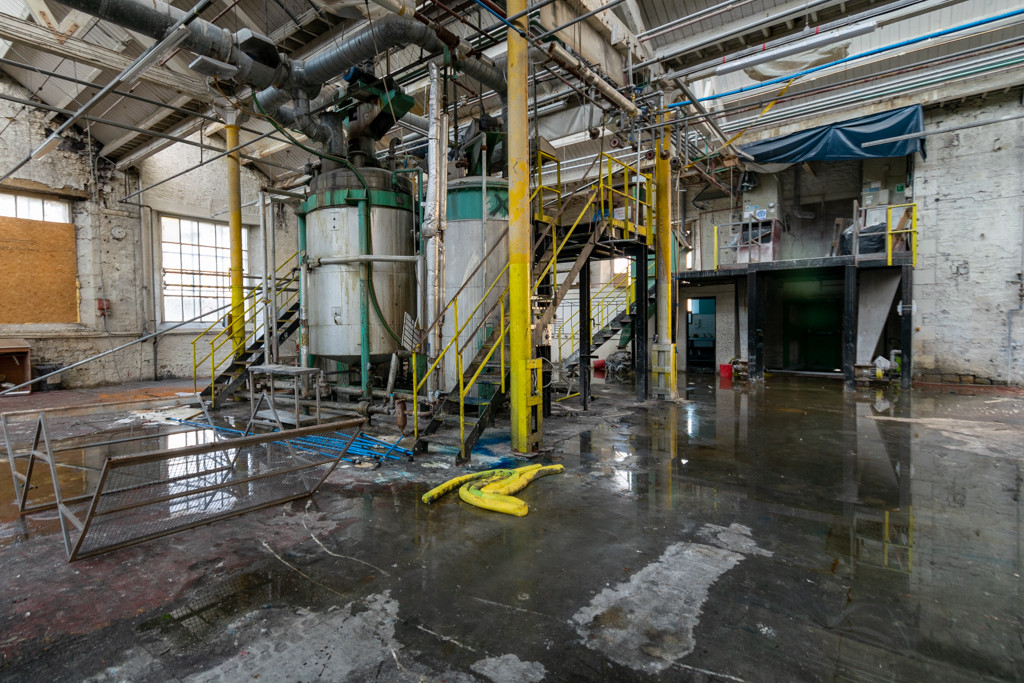 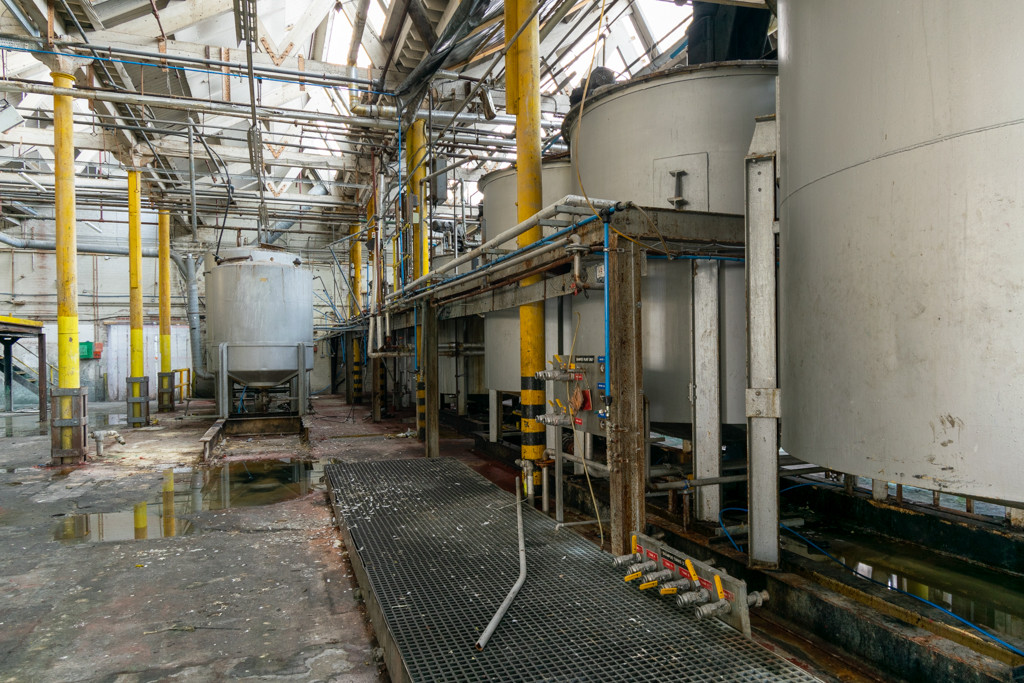 On top of the walkways that provided access to each mixer. 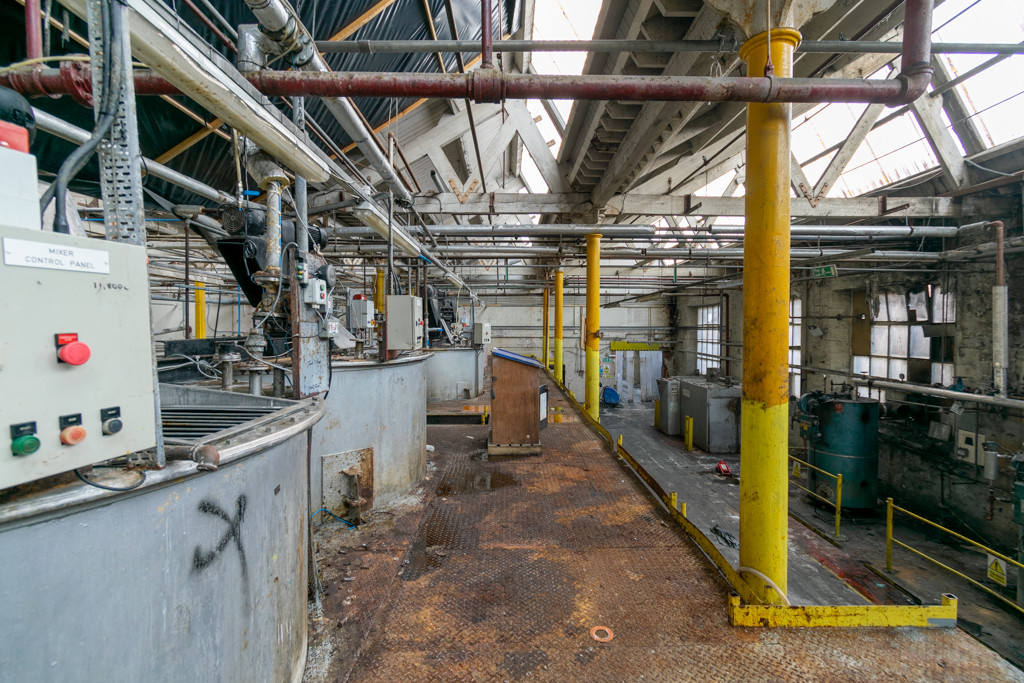 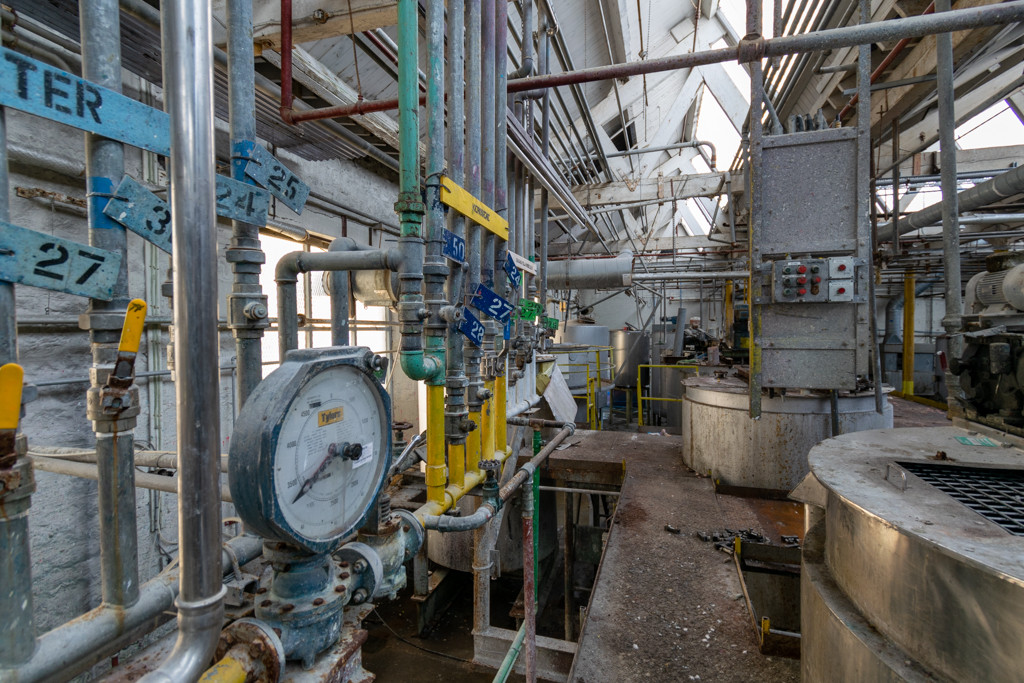 This platform towards the rear of the hall had the nicest control panel out of them all. 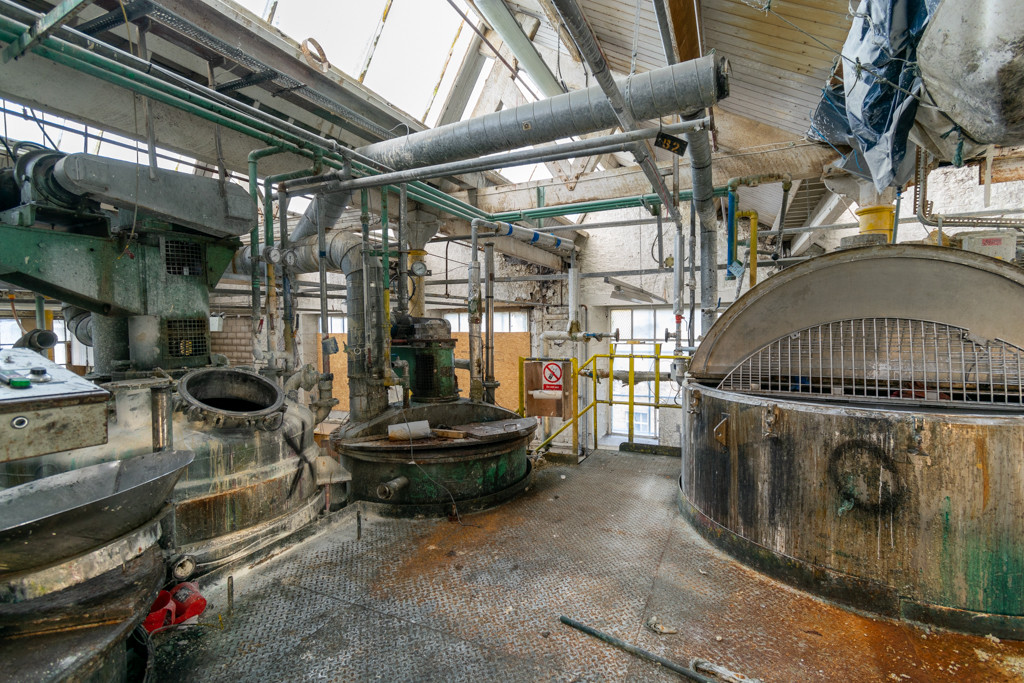 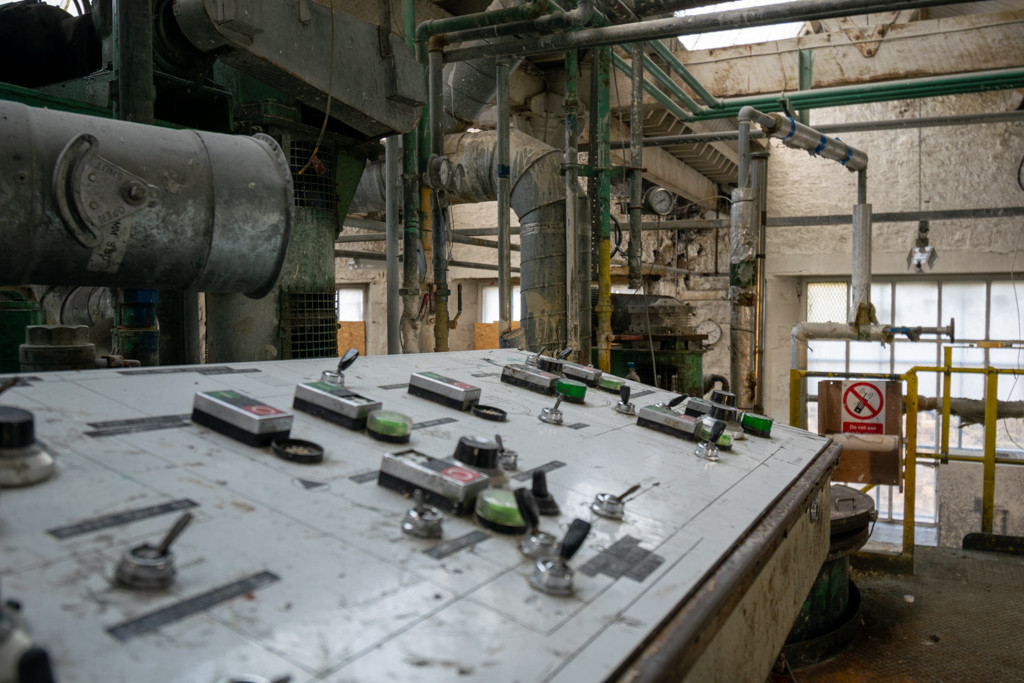 During our visit workers were busy at the front of the property and it was easy to tell by the amount of noise they were making. Even so, we made our way towards the part of the building closest to them and remained quiet while we took our pics.

This room was covered in a dusty material which infact was Tetrion Easy Filler powder that was produced here. The filler is used to fill gaps and holes in standard household materials such as plaster and brickwork. The machines under the walkways connected to machines below where workers would package the product. 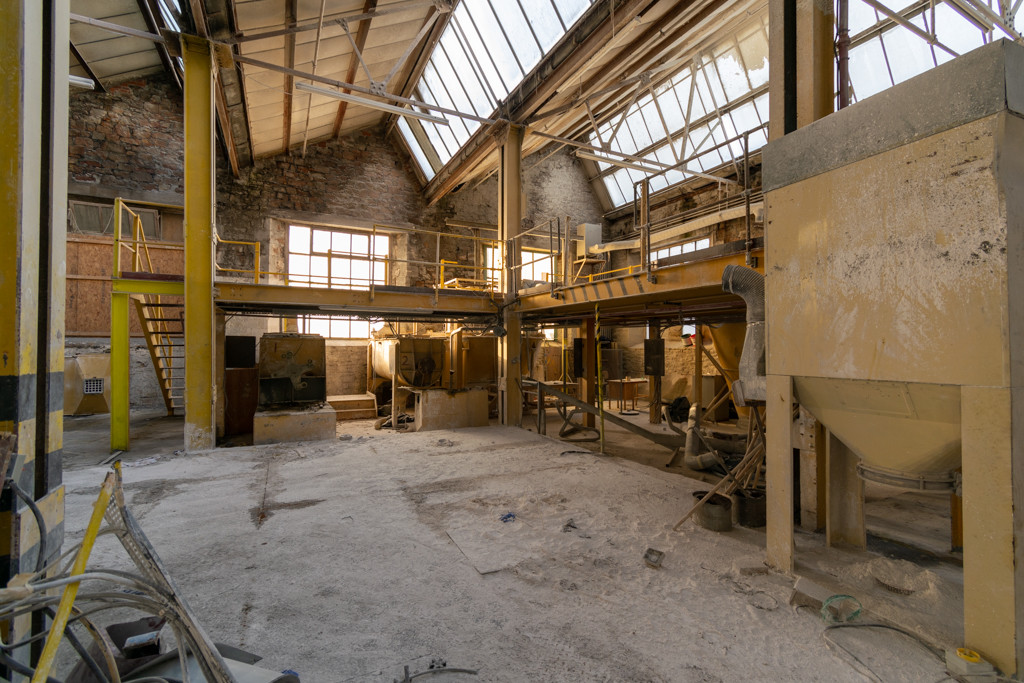 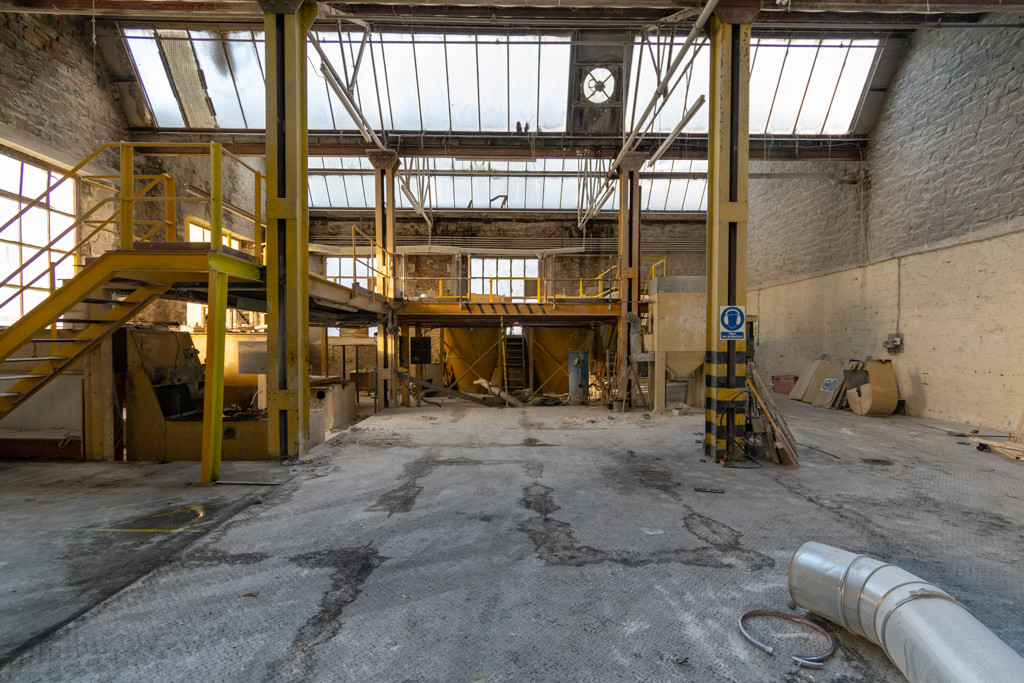 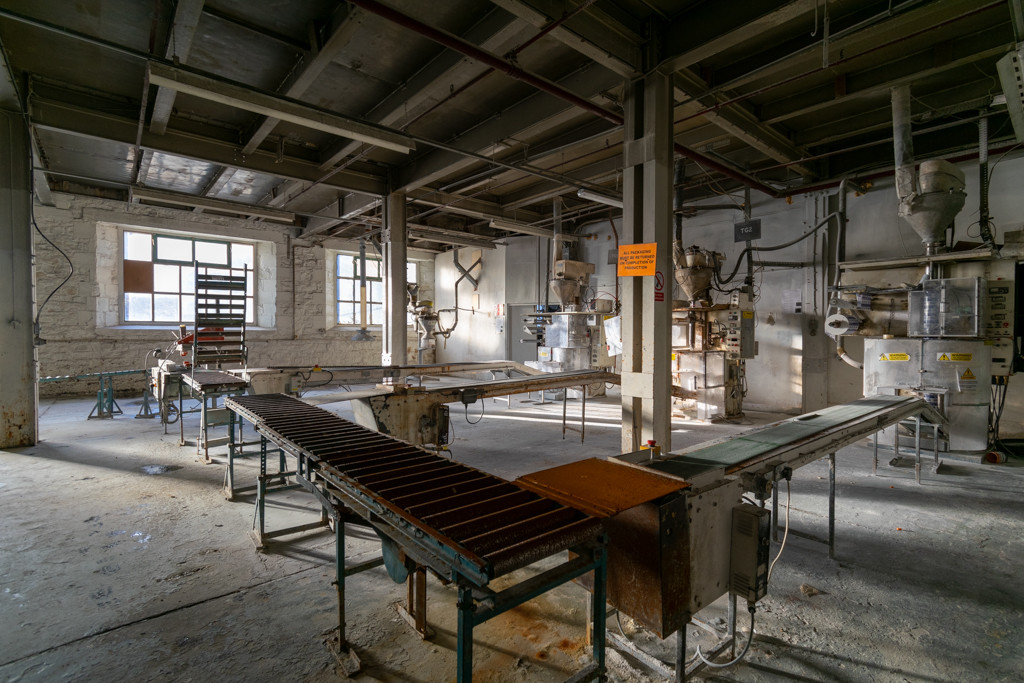 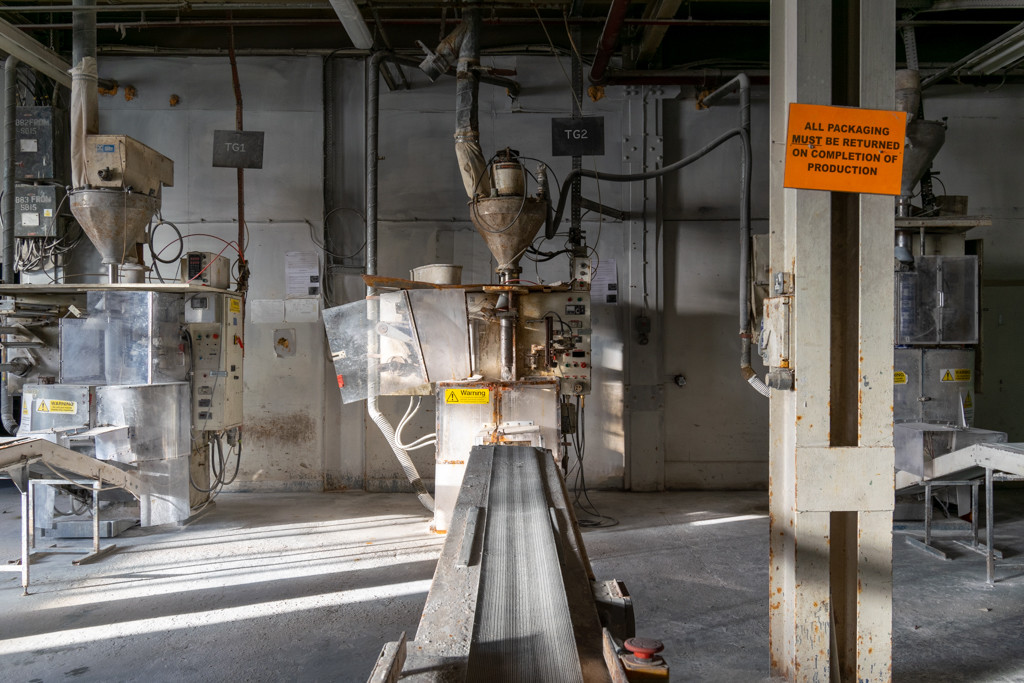 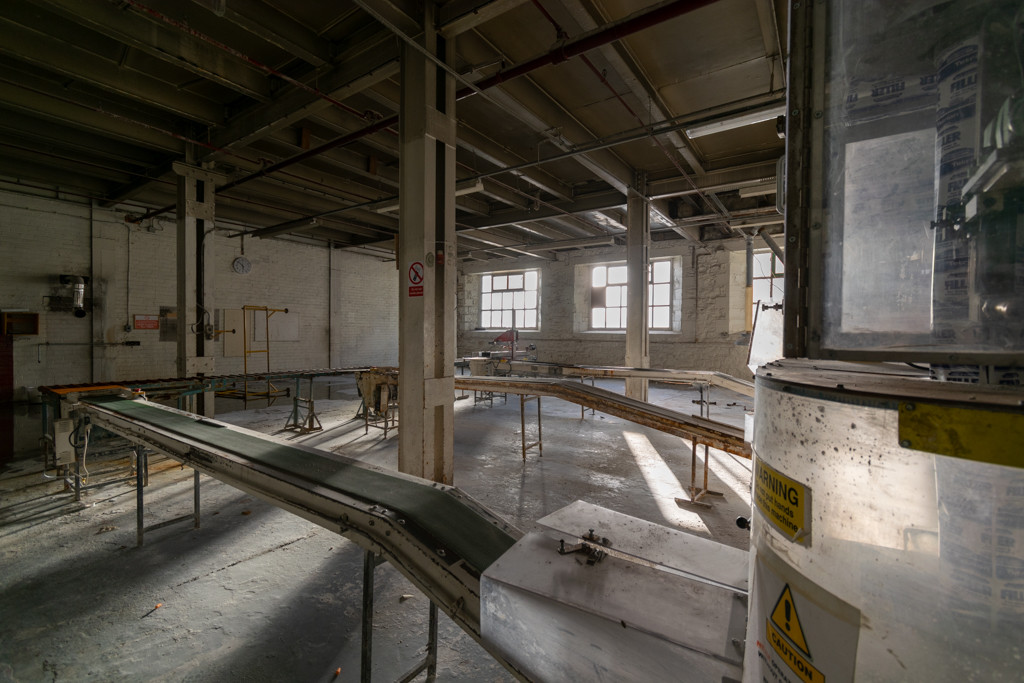 Journeying deeper into the property lead us to the areas used for storage. Just off of the larger room was also the canteen and some laboratories. The labs were nothing like the one we would later find. 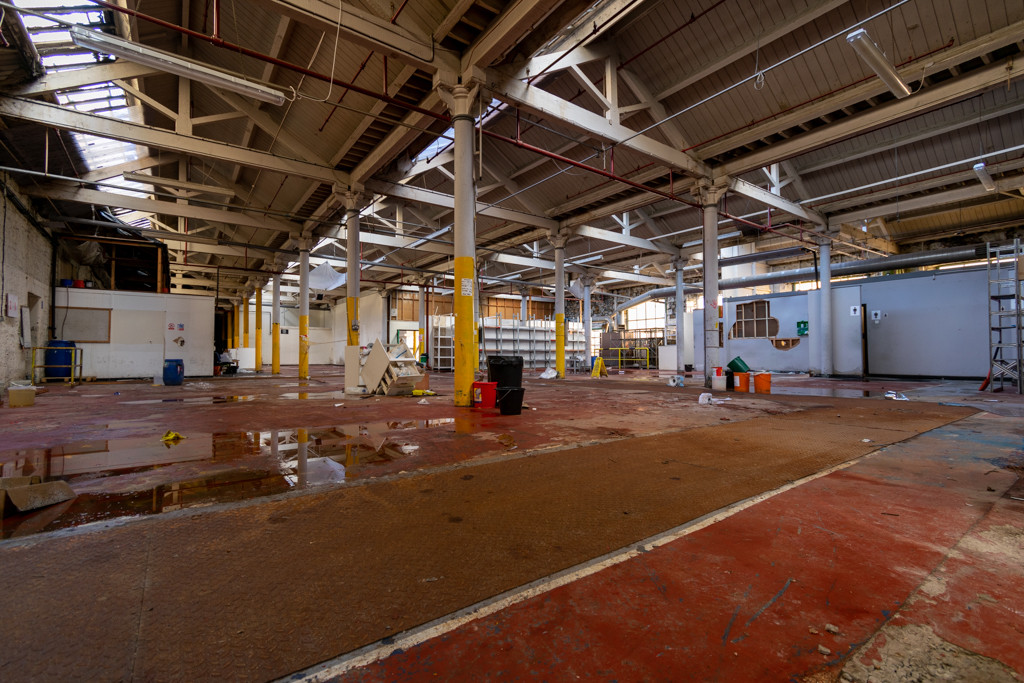 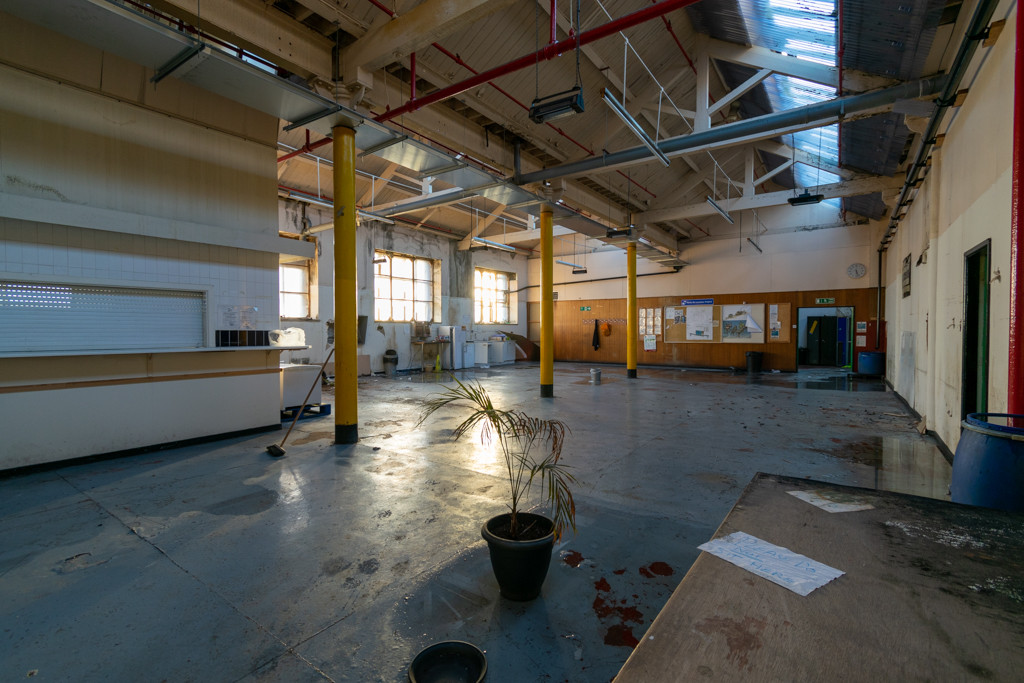 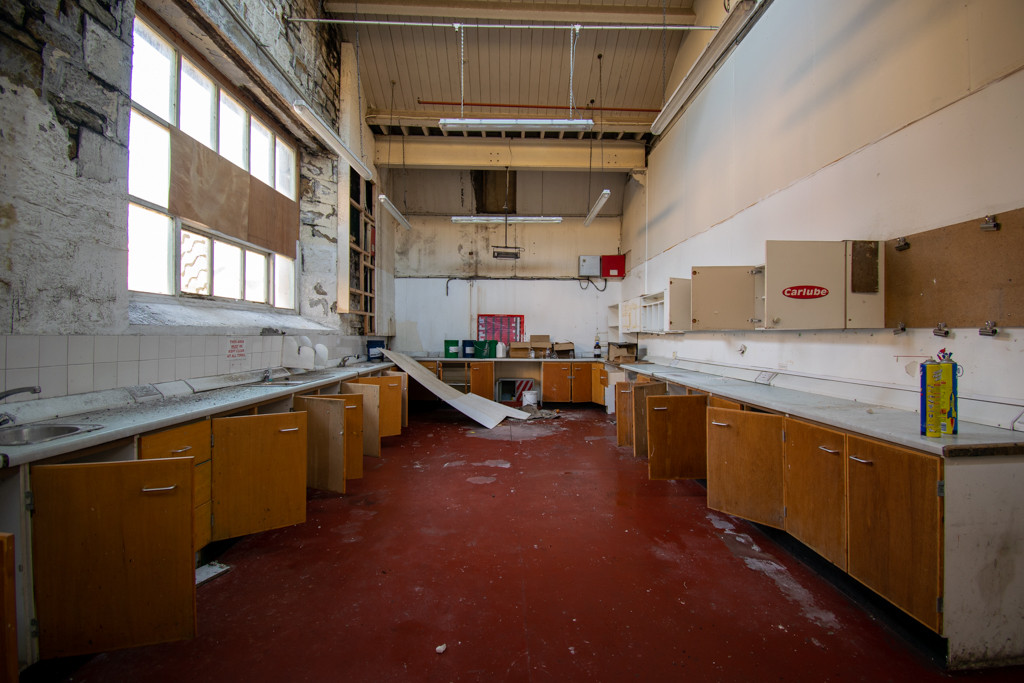 We exited the manufacturing centre and made our way to find the other laboratory. While doing so we entered a newer and bare set of offices. Inside asbestos removal was well underway leaving the top floor accessible. Sadly, it was stripped and anything of interest in there was long gone. 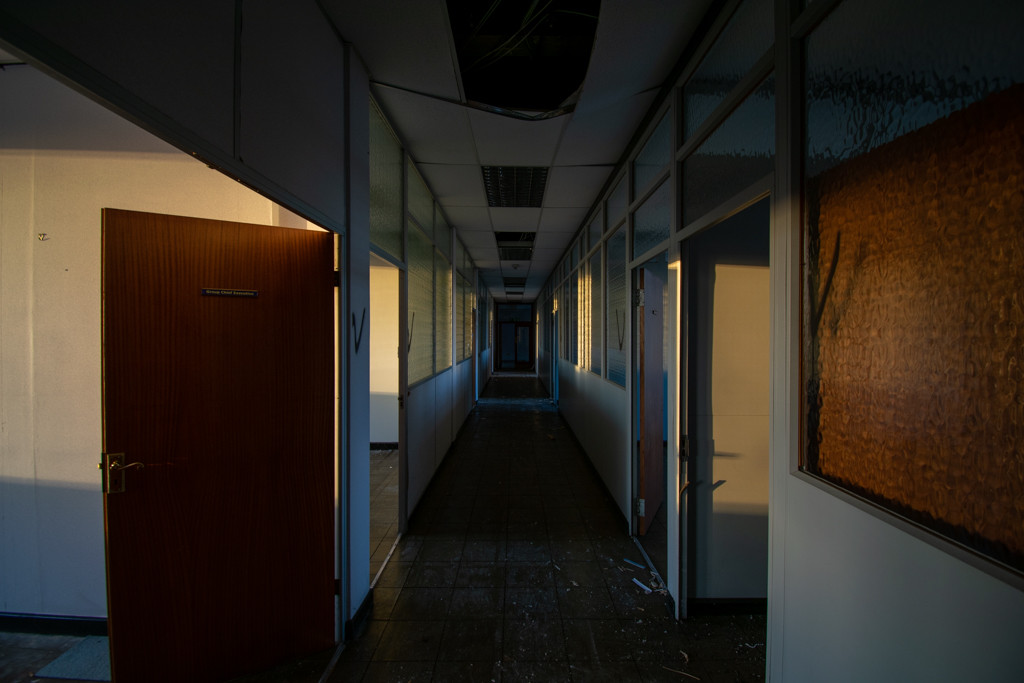 After a further search we found the cabin containing the lab hidden away. Inside was truly untouched, especially compared to the state of previous rooms we had entered. 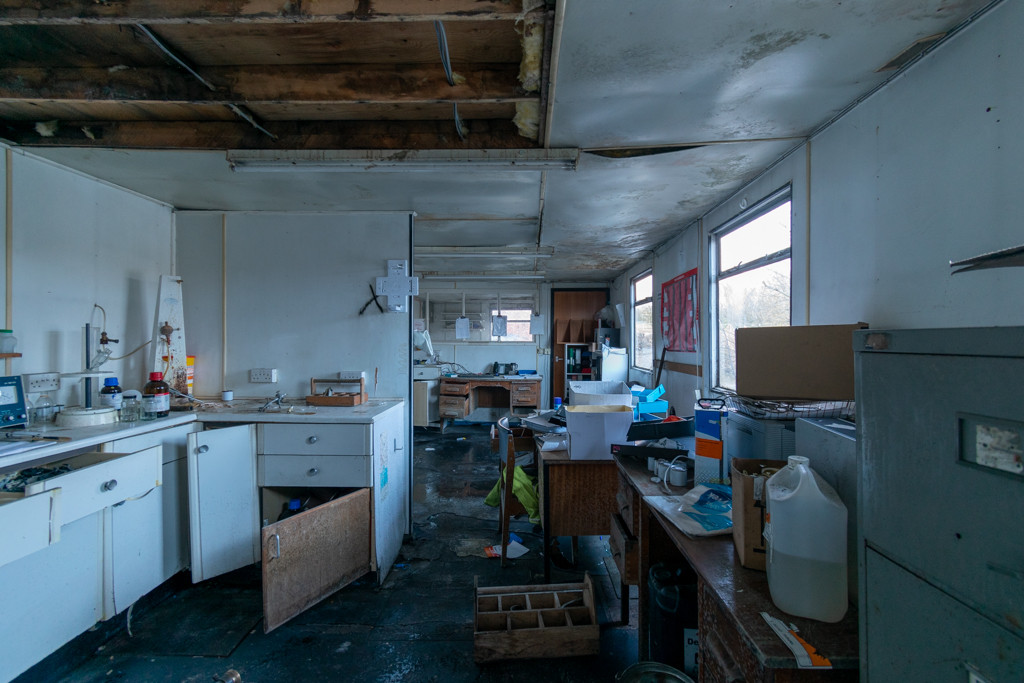 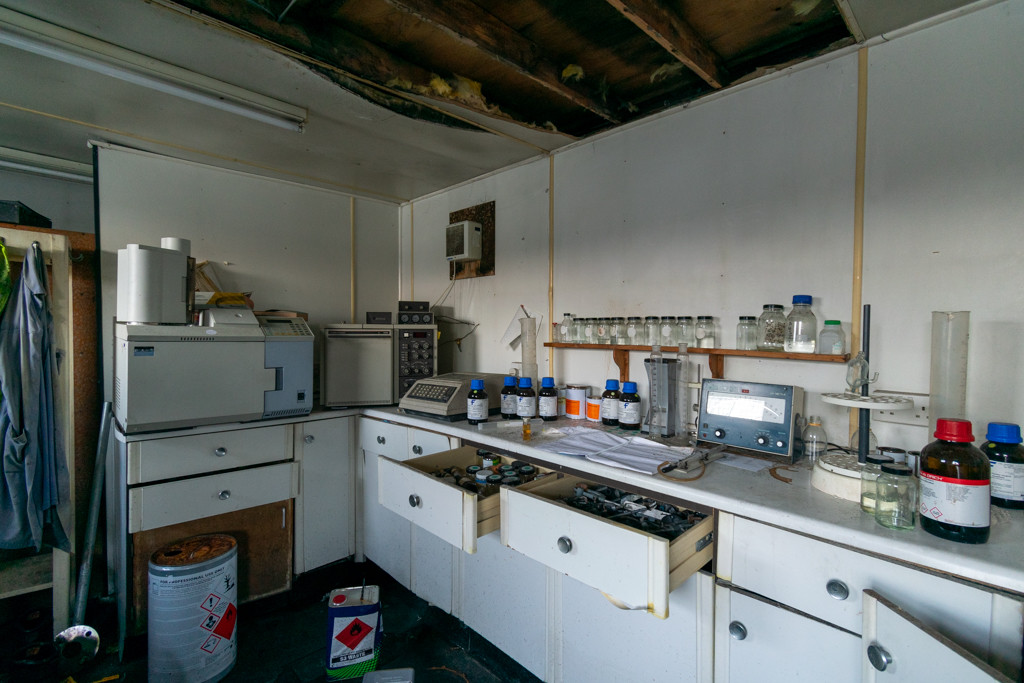 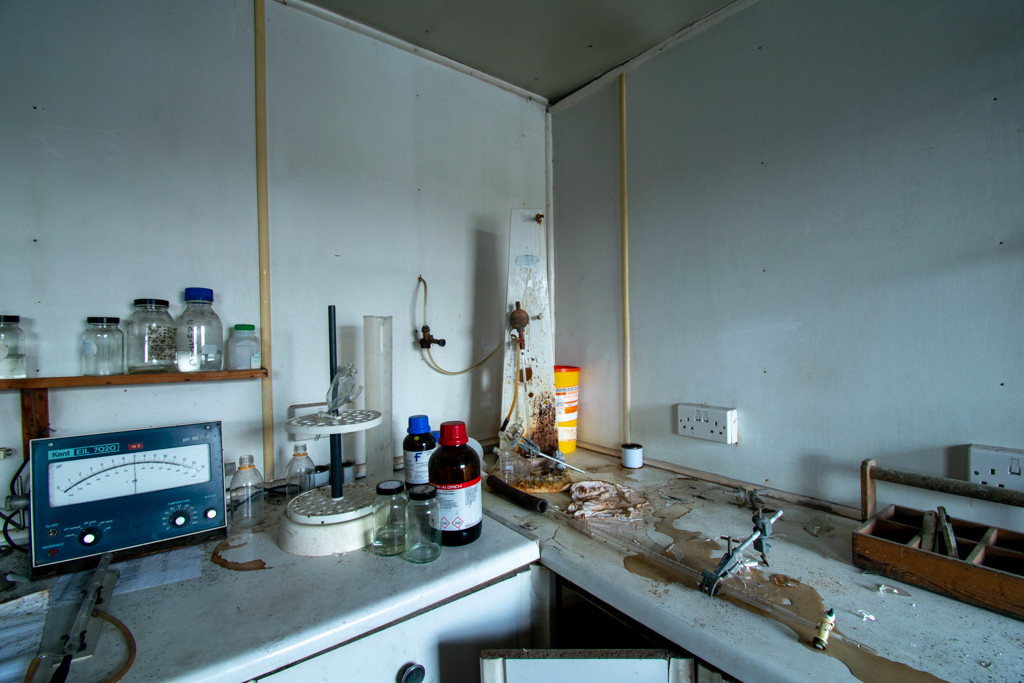 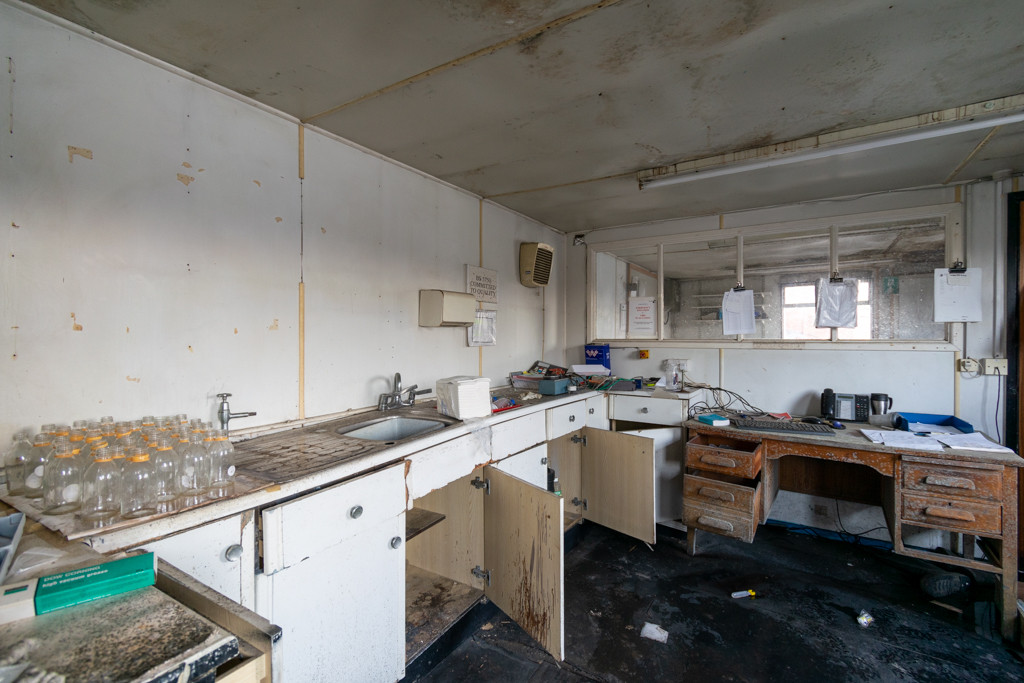 The sun set leaving us with little light, so we left. If anyone has popped back since from July to now it would be nice to know the state it is in currently. 268 homes will replace all the buildings on the land.

Again, we have produced a video that will cover a few parts not included in the report. Feel free to watch below:

28DL Full Member
Great memories of this former customer of mine - lost count of the number of times I visited those labs to give technical support on cellulose ethers and formulation. Here's an advert from the 1980s

Regular User
Nice job on that mate done very well !
I am just developing the mine by improving access