Regular User
Driving down Edge lane one evening I saw the west block of the Littlewoods building was on fire. Fire crews turned up at about 7.15 pm. 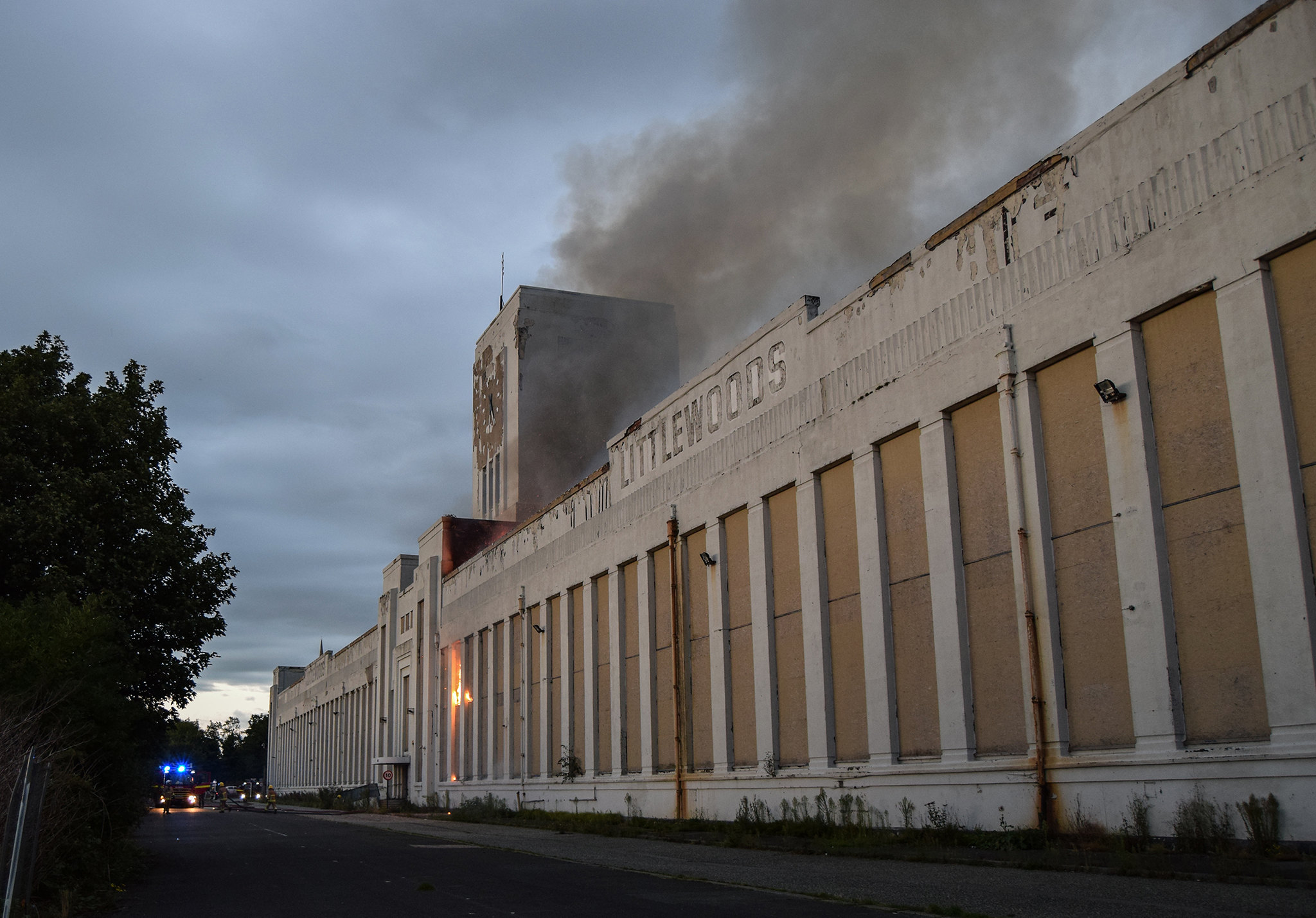 This fire was not too surprising - the building has been more or less open for months now, with kids trashing the place even more and graffiti starting to appear.

Anyway I went in to see what was going on. The fire seems to have started somewhere on the first floor near the central tower - I couldn’t see any fire on the ground floor at that stage, but the smoke was getting quite thick so I headed over to the roadside tower on the east block to watch the show. 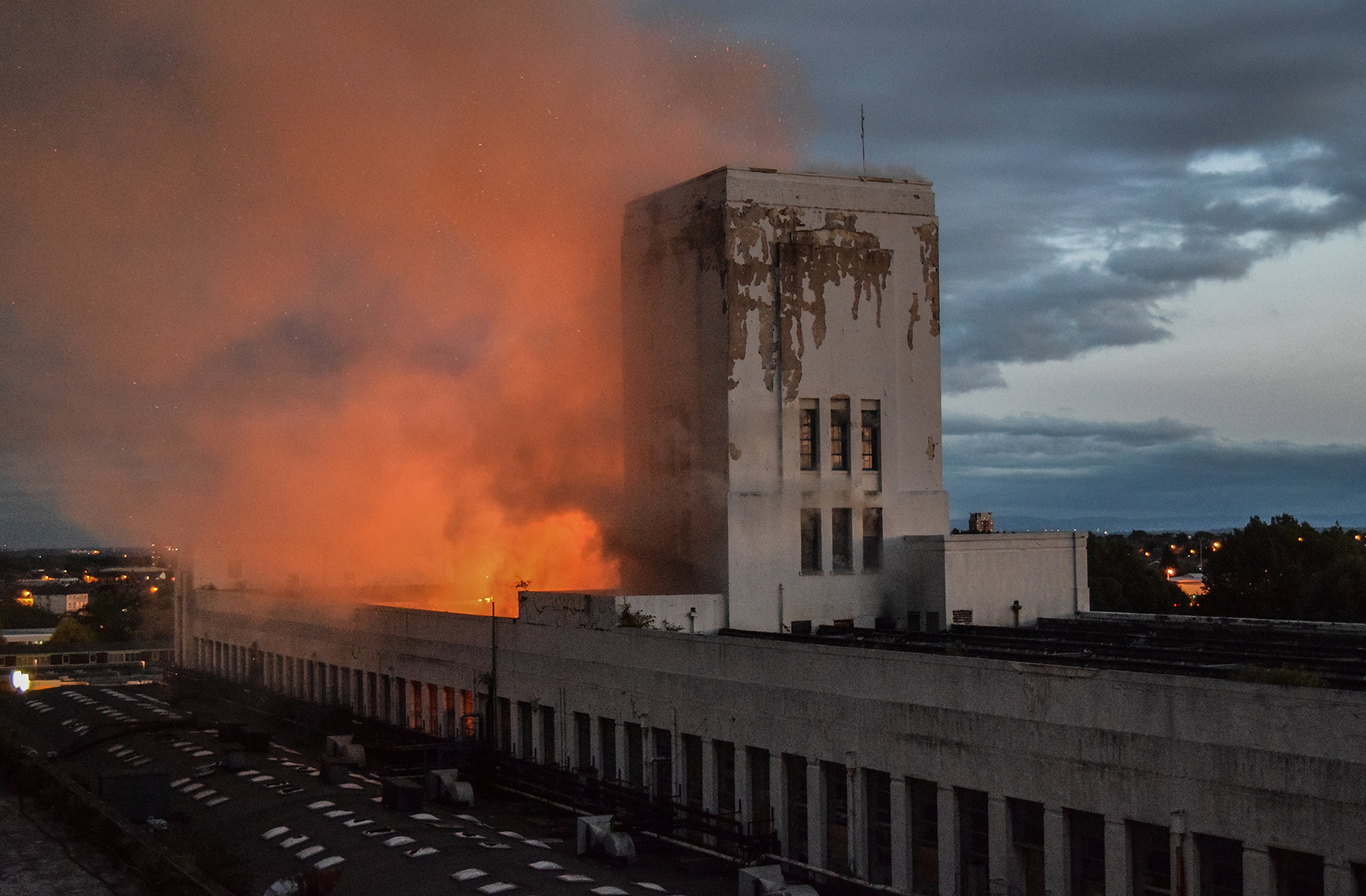 Initially it seemed the fire would be extinguished fairly rapidly, but it kept growing around the central tower area then along the roof towards the towers at either end. This didn’t look good as most of the flammable stuff is in the towers (wood staircases, partitioning, joists and floorboards). I eventually left when the police turned up to cordon off the place, and joined the surrounding crowd of what seemed like half of Liverpool taking ‘photees on dare mobies’.

The fire was eventually brought under control the next day, helped by rain.

I went in again the day after in the early morning drizzle to assess the damage. This visit was somewhat fraught because half a dozen firefighters were also wandering around. Luckily nobody noticed the damp sooty footprints heading to various hiding places and I ended up overhearing several conversations at close range, including one later in the day between people who may have been from Capital and Centric (the owners) complaining that the place was confusing because all the rooms looked the same. Luckily they weren’t sufficiently lost to push the half open door I was lurking behind.

On with the pictures. The end tower farthest from the road escaped unharmed, affording a view of the main damage, the partially collapsed roof between it and the central tower. 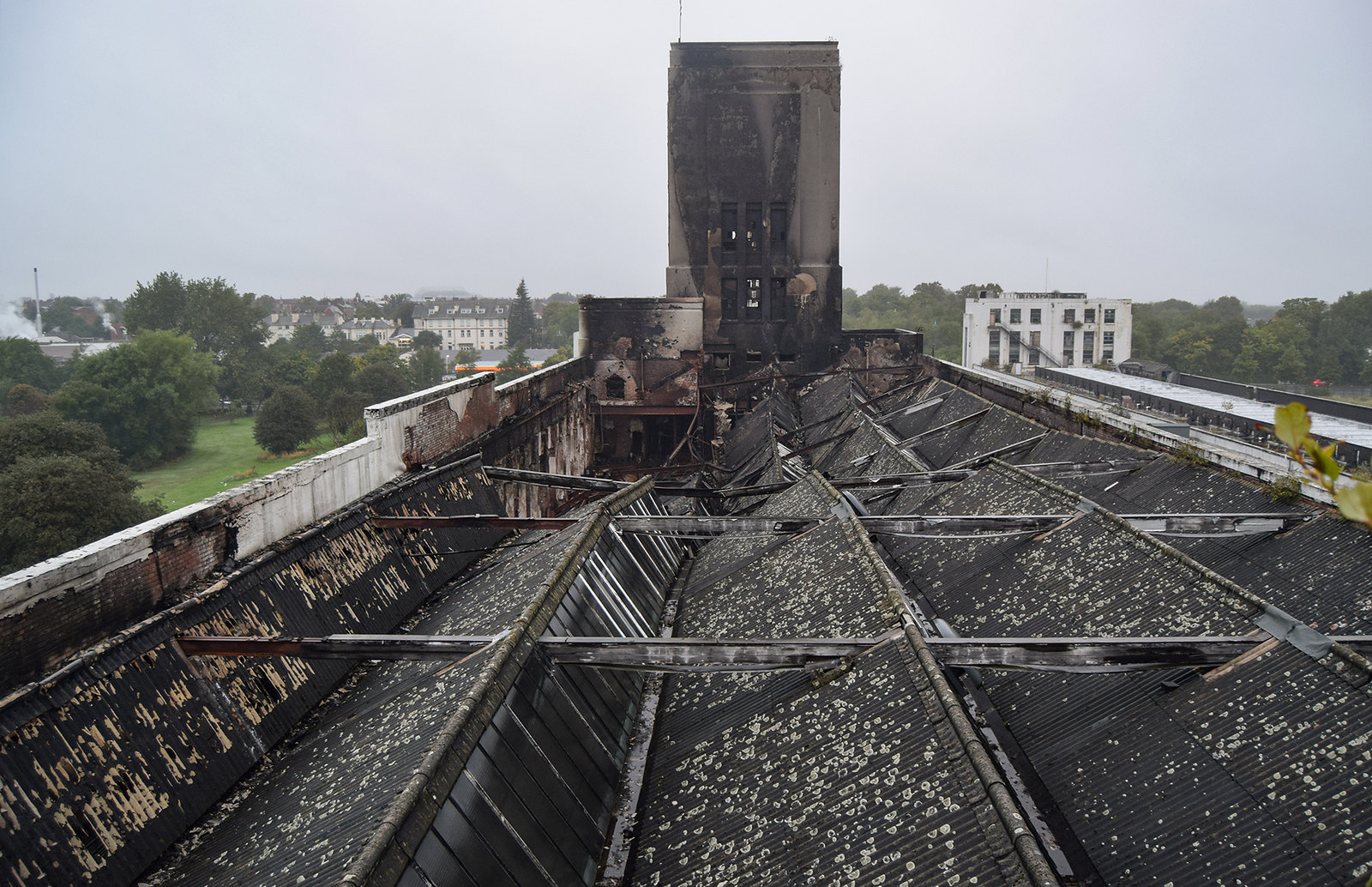 Fire seems to have spread along the edges of the roof, probably helped by the timber in the edge spaces. 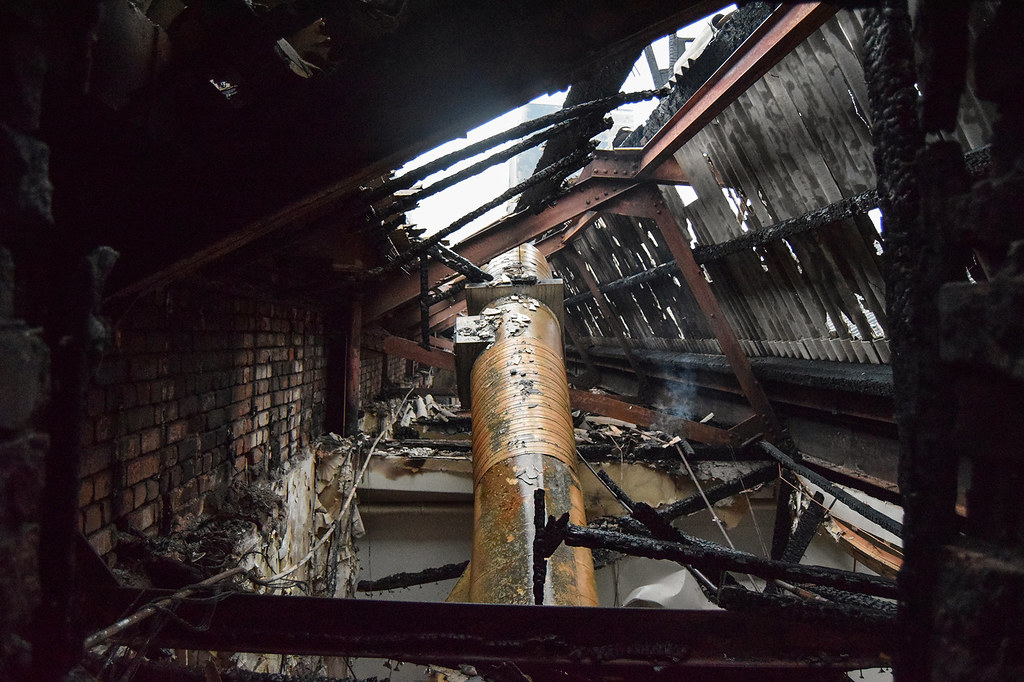 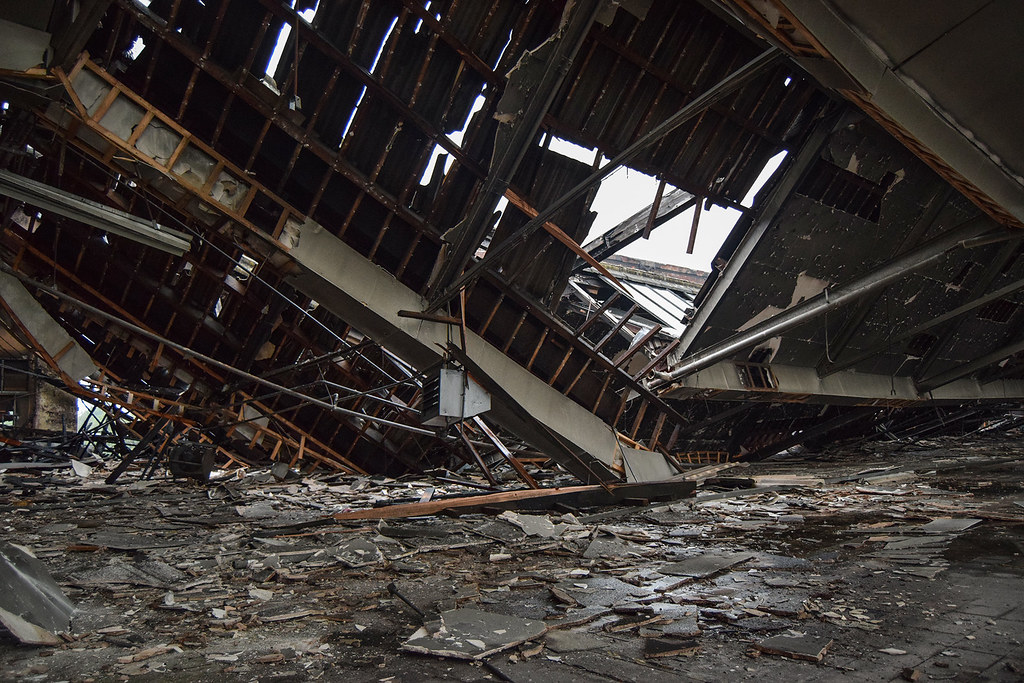 An after and before comparison of the first floor of this section. 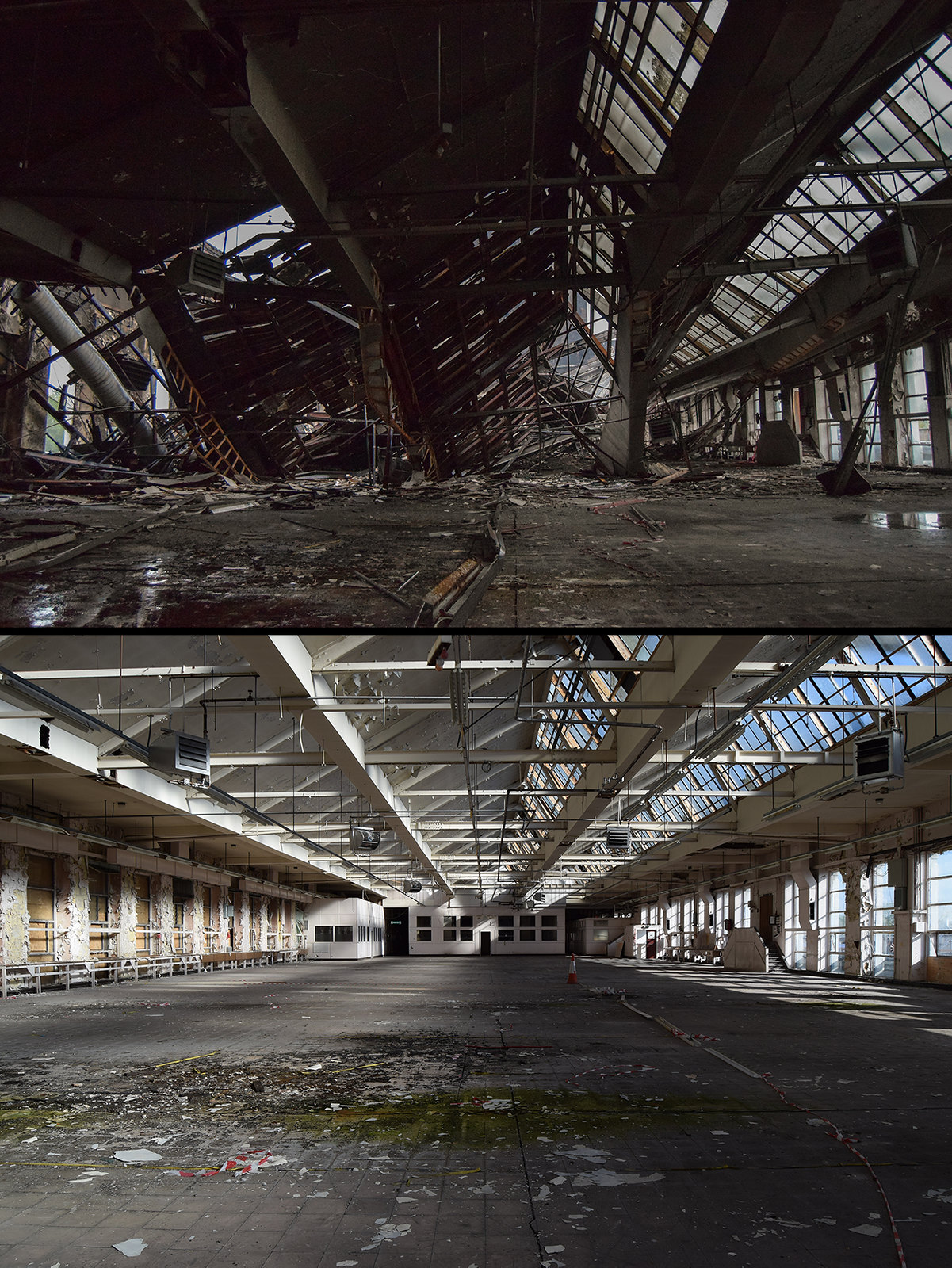 A similar comparison of the ground floor below showing where the fallen roof has punched holes in the ceiling. 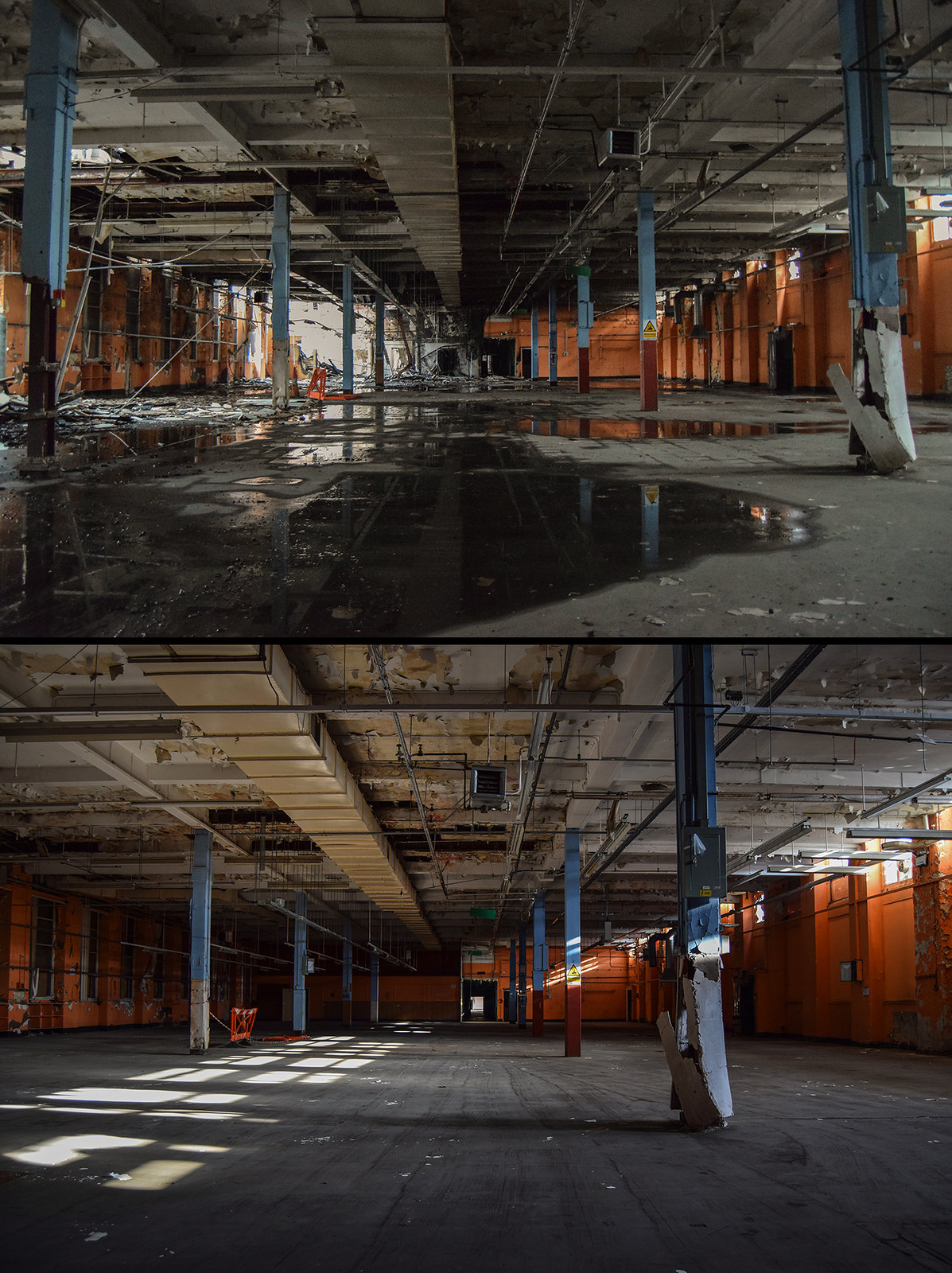 Comparison of the the entrance foyer, which is almost under the clocktower. 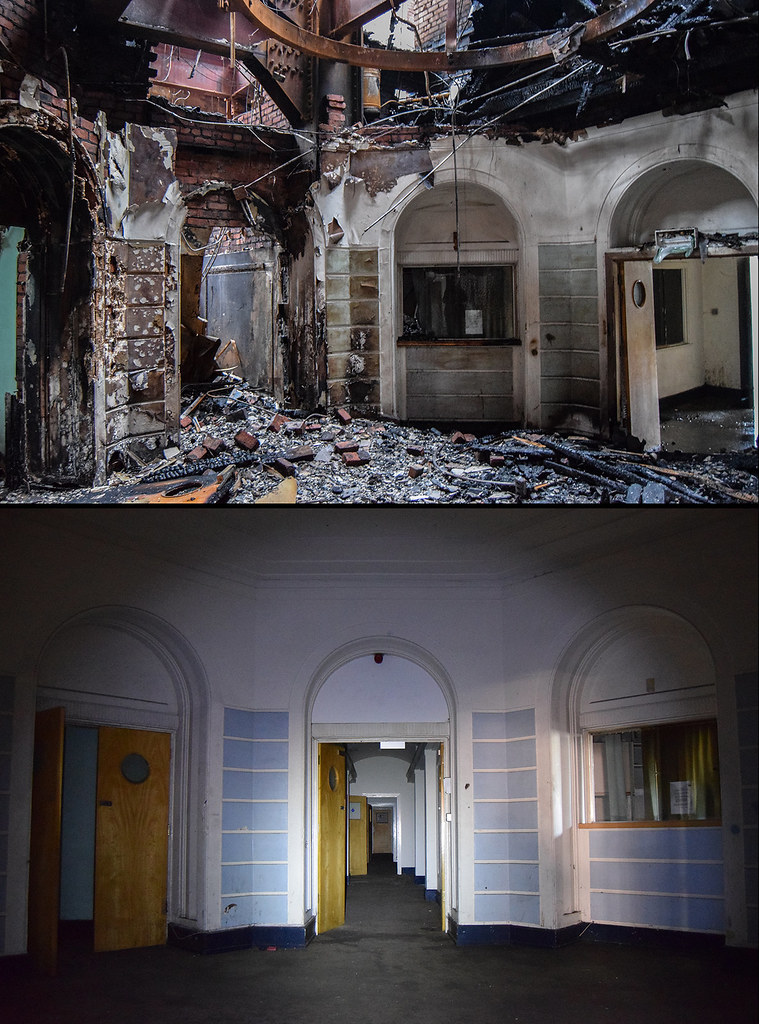 One floor up the supports of the clocktower seem mostly OK - even the ladders are still there. It seems likely that the contents of the concrete and brick top rooms are just singed - the lift mechanism hadn’t fallen down at any rate. 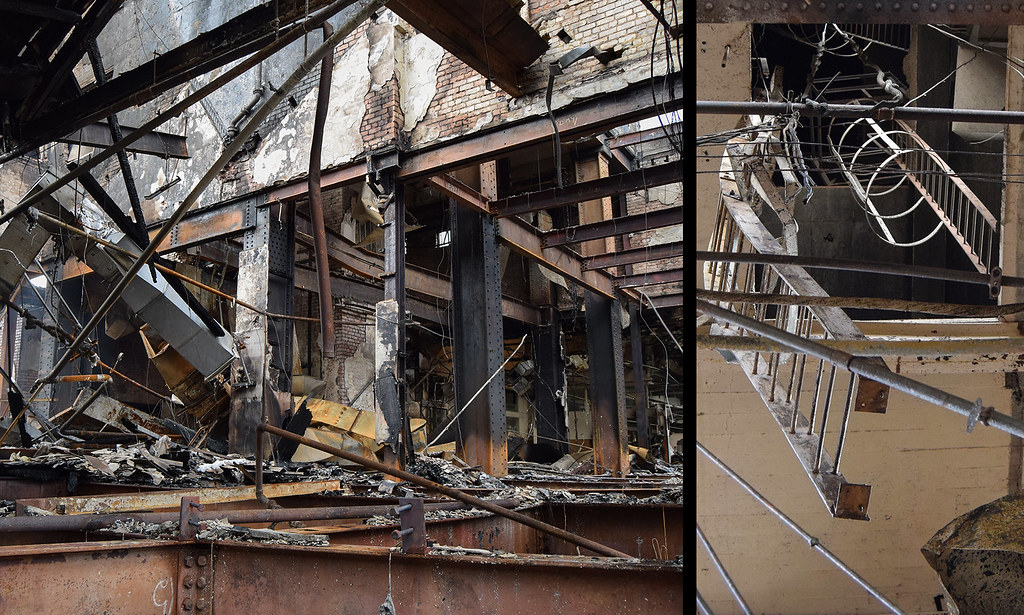 Moving over to the roadside tower, the roof here is in much better shape although fire has run along one edge. 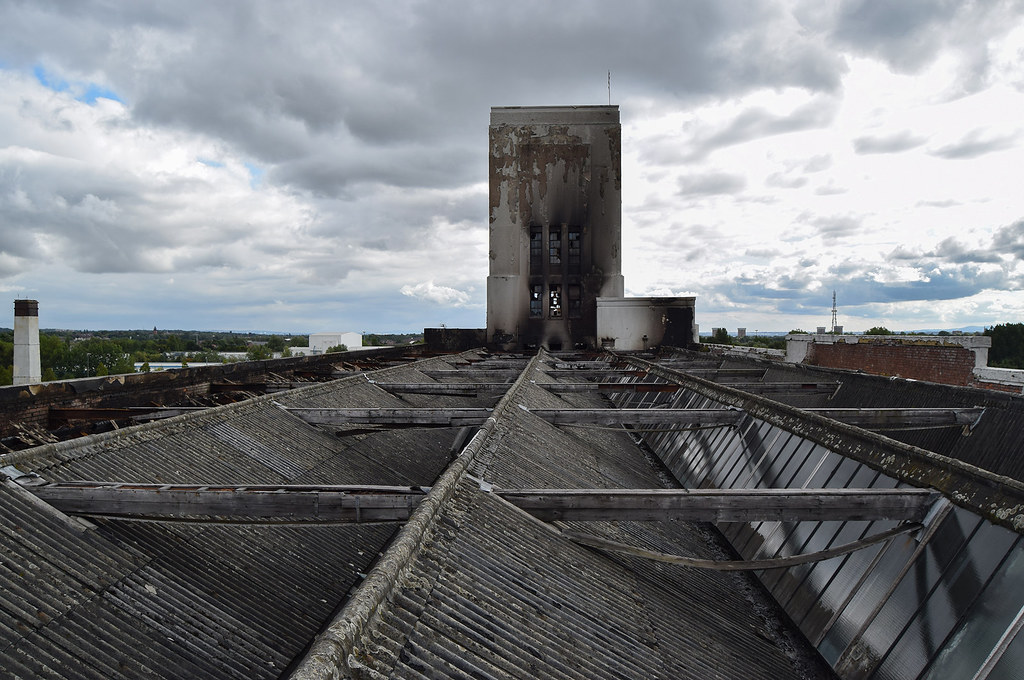 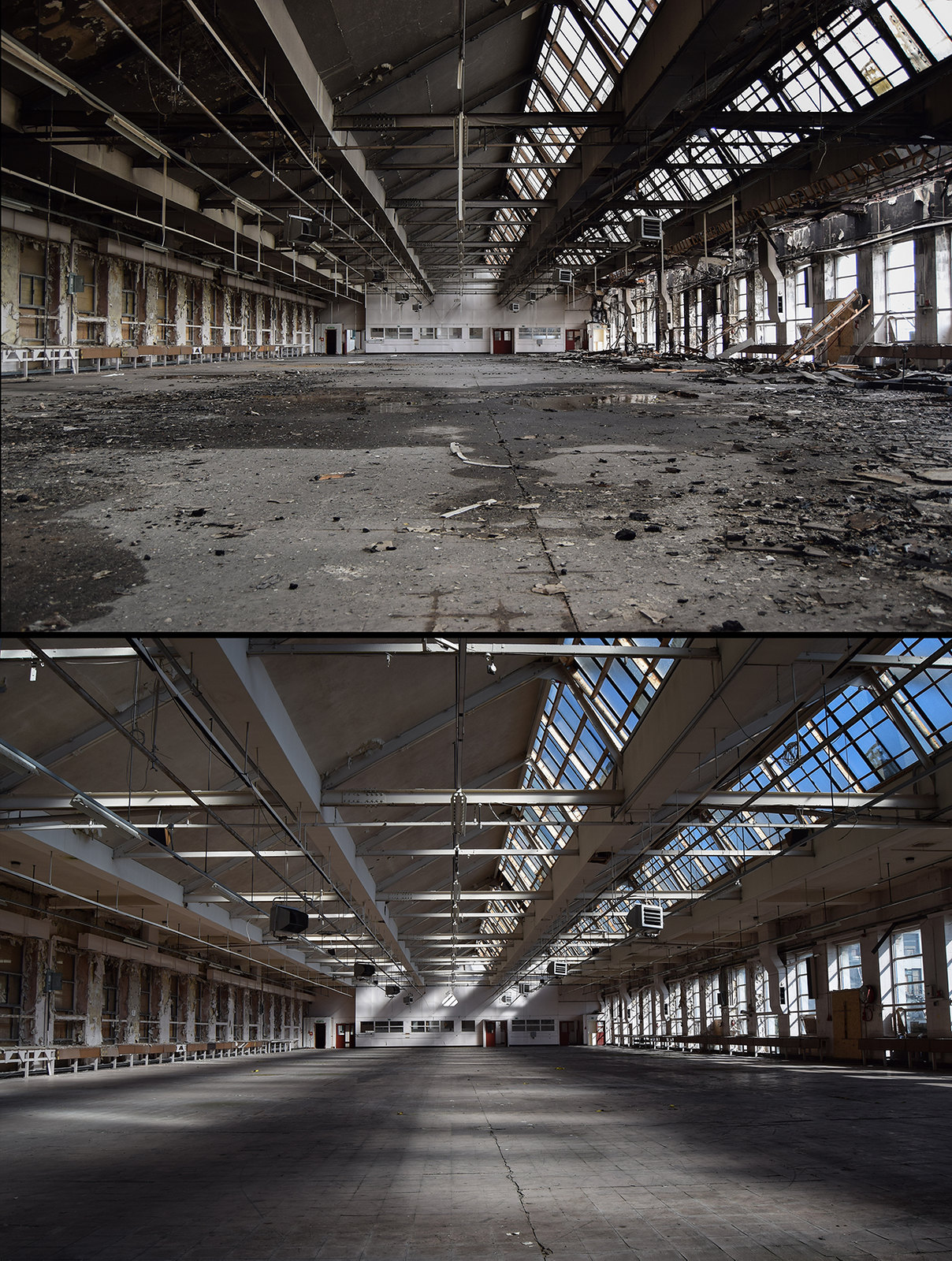 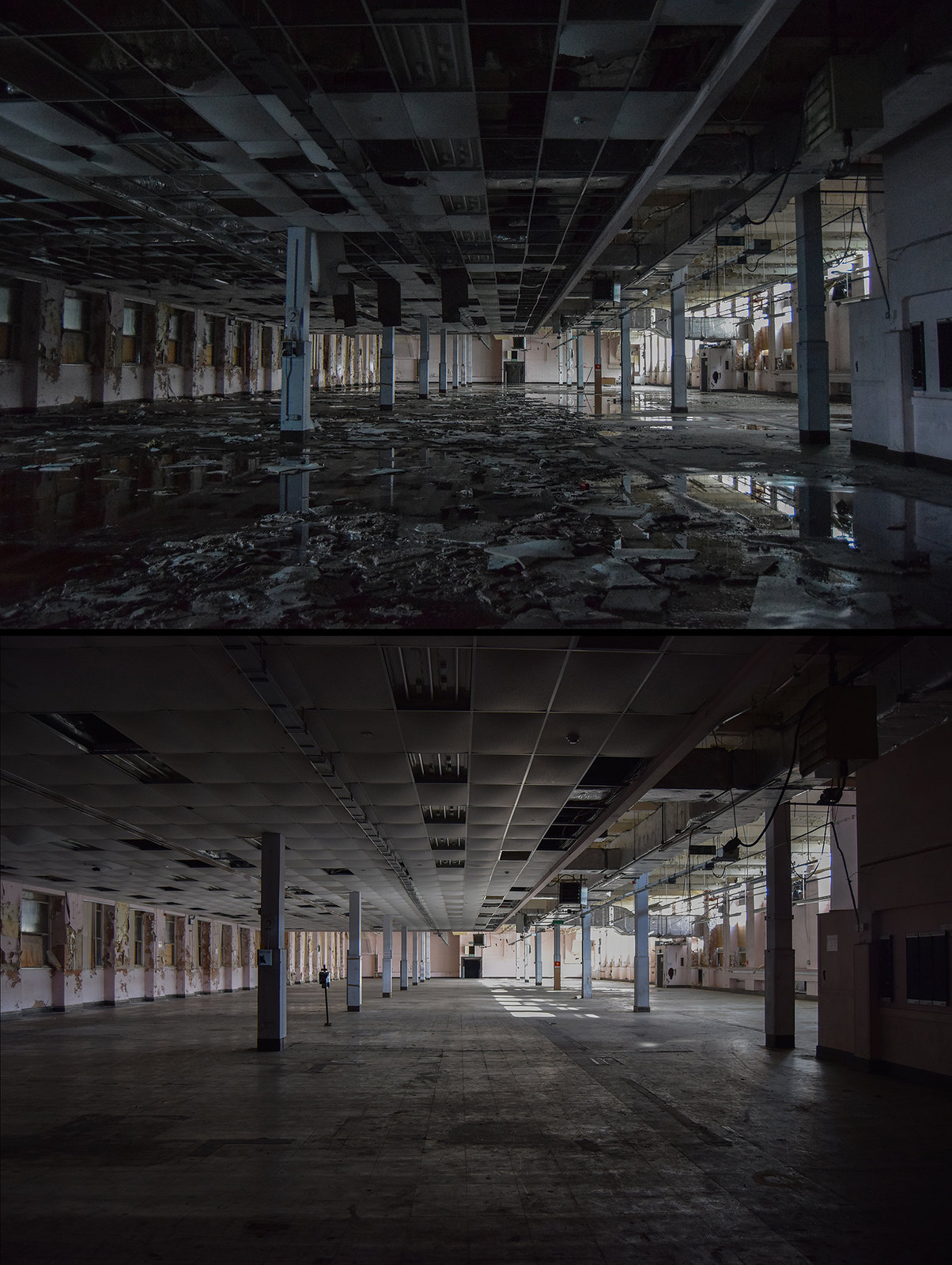 The roadside tower itself didn’t fare too well, but only the top two levels and a bit down the left hand edge were damaged. 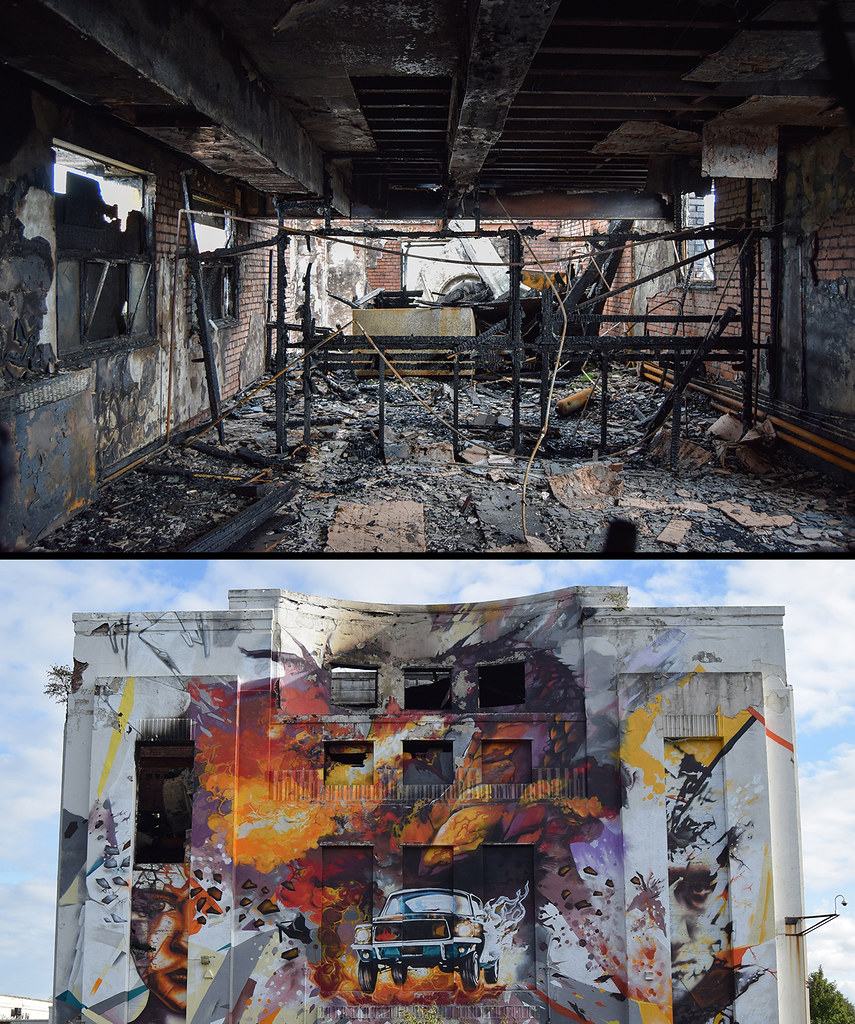 Overall, despite the lurid press coverage, its not too bad - the east block and the central section with its nice curved roof were not affected at all. The interiors are likely be stripped anyway, including the very undistinguished wooden staircases, and a picture of the proposed conversion shows new roofs planned for both east and west blocks.[/url]
Last edited: Oct 1, 2018

28DL Full Member
That was quick off the mark! Nice and interesting set of comparison shots you've got there.

Regular User
Fantastic report mate I’m amazed you got in and got these shots so easy I thought it would be crawling in fire crews etc. Still worth a visit in my eyes

Staff member
Moderator
Nicely covered, and the comparison shots are good, just a shame it's under these circumstances. Well done getting in there and getting that done.
My Website -> Behind Closed Doors

Glad to see it's not all doom and gloom as reported in the press.
| Flickr | UrbanDegeneration.com | Google+ |
​

Regular User
Much respect for bringing us this UC.

28DL Full Member
I thought there would have been a lot more damage done hopefully it will get saved now.
ㄥ丹∨工れ◯