Regular User
The Royal Naval Cordite Factory (RNCF) was built between Poole and Wareham during the First World War to make Cordite, which is classed as a propellant, not an explosive. In 1914 Winston Churchill, then First Lord of the Admiralty, decided that the Royal Navy needed its own plant to produce high quality material.

A number of locations were investigated before the 500 acre site at Holton Heath was chosen with its good road, rail and sea links.

The RNCF was effectively self-sufficient and had its own internal rail system with about five miles of standard gauge track and 14 miles of narrow gauge, together with its own rolling stock. During the First World War, cordite was dispatched to a jetty in Poole Harbour by rail where it was loaded onto sailing barges for transport to Priddy's Hard in Gosport. 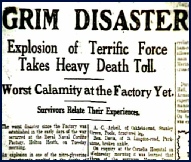 strict secrecy with security measures governing the lives of those who worked at the RNCF with even the families of those working there not knowing what jobs their relatives did nor the dangers involved.

The chemistry of explosives is complicated and there were many dangers in the processes. Overall safety record was good but in June 1931 there was an horrific accident with the loss of ten lives.

During World War Two there were various defensive measures taken by RNCF including establishing decoy sites nearby to thwart enemy actions. Cordite production ceased at Holton Heath in 1945. The factory was placed on a care and maintenance basis and production switched to the Royal Naval Propellant Factory Caerwent in South Wales which had been built during the Second World War and was closely modelled on Holton Heath. Some parts of the site continued as the Admiralty Materials Laboratory until 1977 when it became part of the Admiralty Marine Technology Establishment (AMTE). It later became the Admiralty Research Establishment, and latterly part of the Defence Research Agency, remaining operational until 1997. I called in here on my way back from Devon , there wasnt much left to photograph as the buildings were empty except for a bit of signage and a few photos , however it was still a nice wander.

Regular User
Nice back cat coming out. Another interesting read, thanks Jane.

Regular User
Liked that. Those archive pics are ace...

Calamity Jane said:
Nice back cat coming out. Another interesting read, thanks Jane.

HughieD said:
Liked that. Those archive pics are ace...
Click to expand...