What do you say? It's a funny old place. Back in 2006 it was trashed. When I want in 2008 it was trashed further, now 12 years later it is somehow still standing, yet trashed. It has seen open season for explorers, haunted live, fires, crazy security guards and their dogs, fights between the council and developers with royals getting involved, and somehow it still sits derelict. Whilst it may not be the forums favourite, as it hasn't ever really contained much of interest, it is an inherently beautiful Victorian Gothic structure and do sincerely hope that the Denbigh Council do manage to restore it so some sort of glory. The front facade is a thing of beauty. 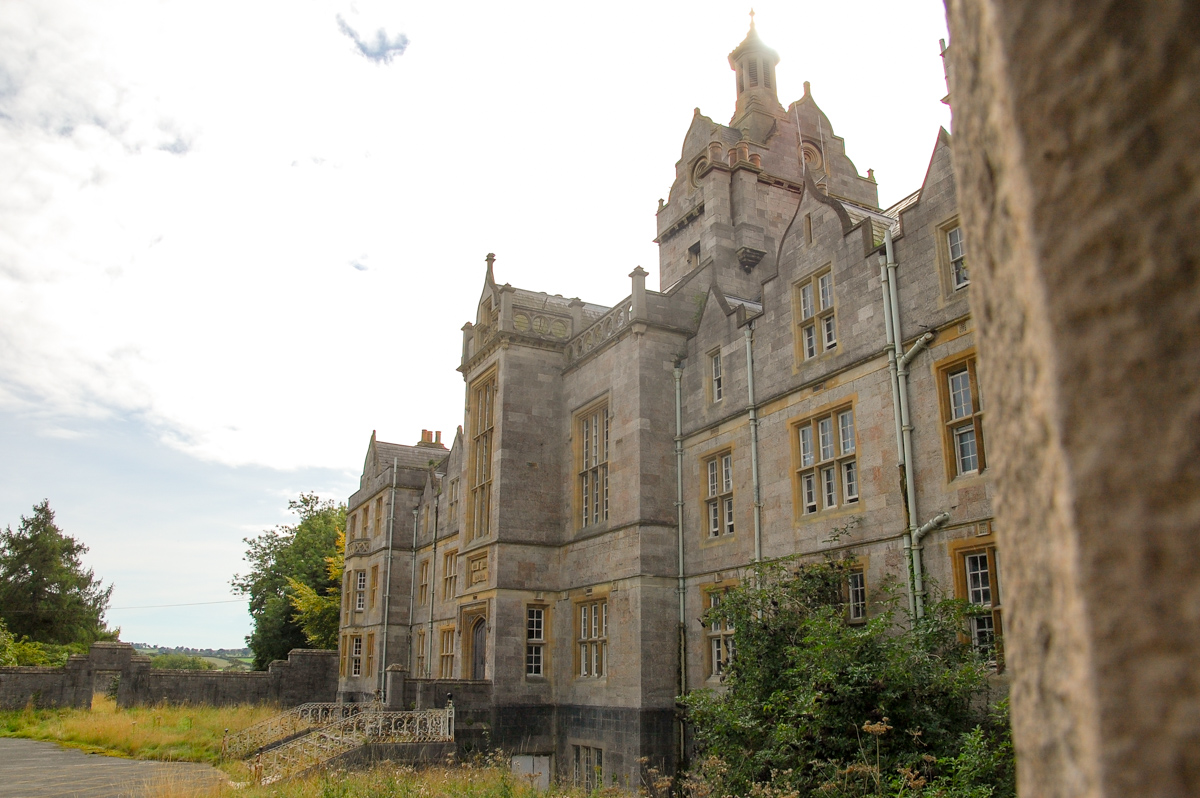 ​
I visited back in 2008 with @kingrat and others (Lutex and Wraith I think) after we had spent a messy Friday evening in KingRat's local boozer down near MK drinking Strongbow slushies. The 5am start, long drive and massive hangover clouded my day considerably. I'll be entirely honest, I only vaguely remember the explore. We spent a long time trying to find a way up the tower, where I first discovered the arse clenching feeling of a rotten floor giving way. We bumped into many explorers on the day, too many to name here, messed about in the hall and discovered the joys of finding toilet roll in a derp. All I really remember of the buildings is that there largely stripped of anything after a failed development attempt and generally beaten down. Photographically, it wasn't very photogenic as I was too hungover to take a decent photo!

Still the hall was still there and the admin had floors so it wasn't all bad! 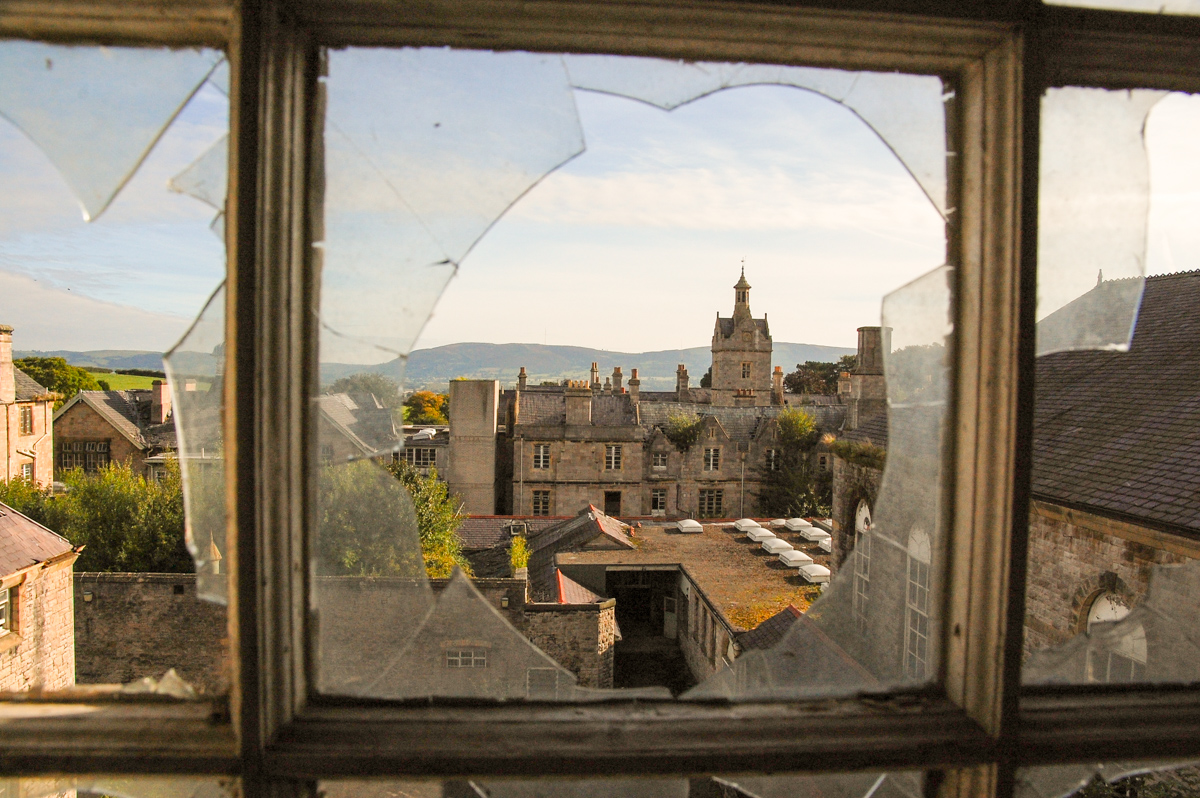 A view from the tower (taken by @kingrat after I handed him my camera, and then promptly found the weakest floorboards) 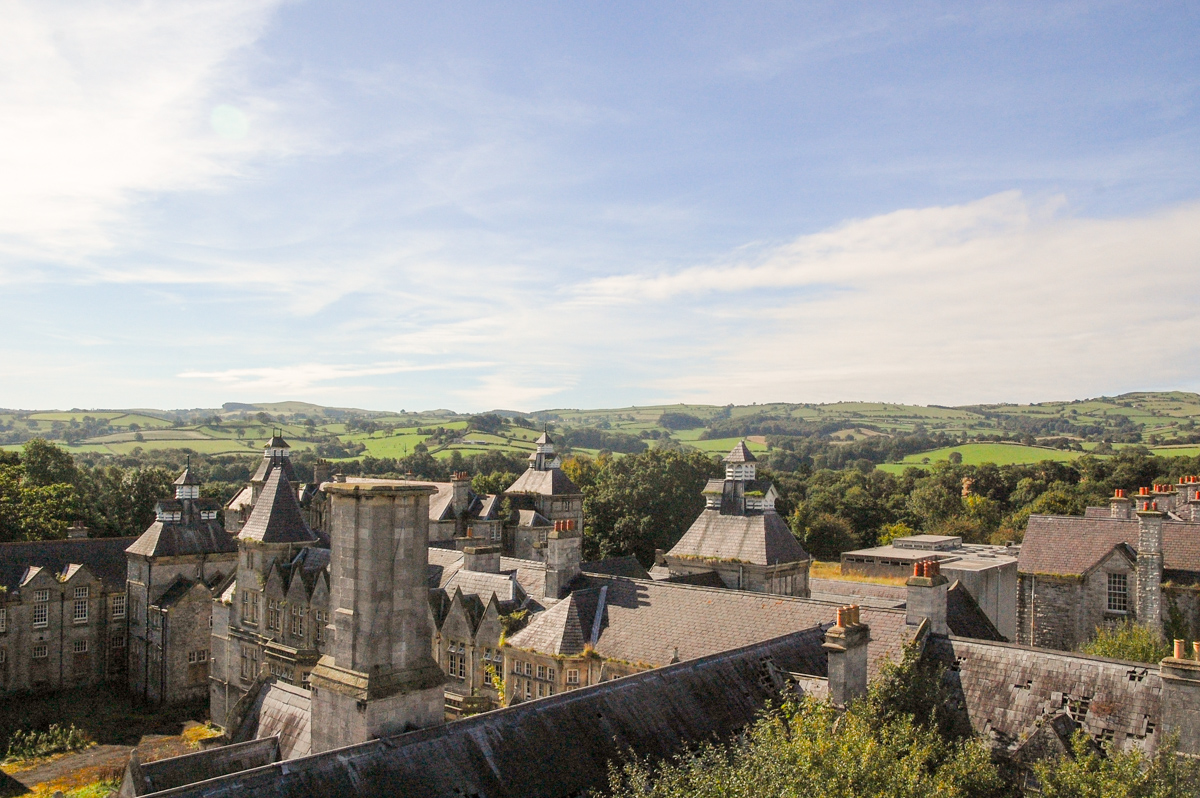 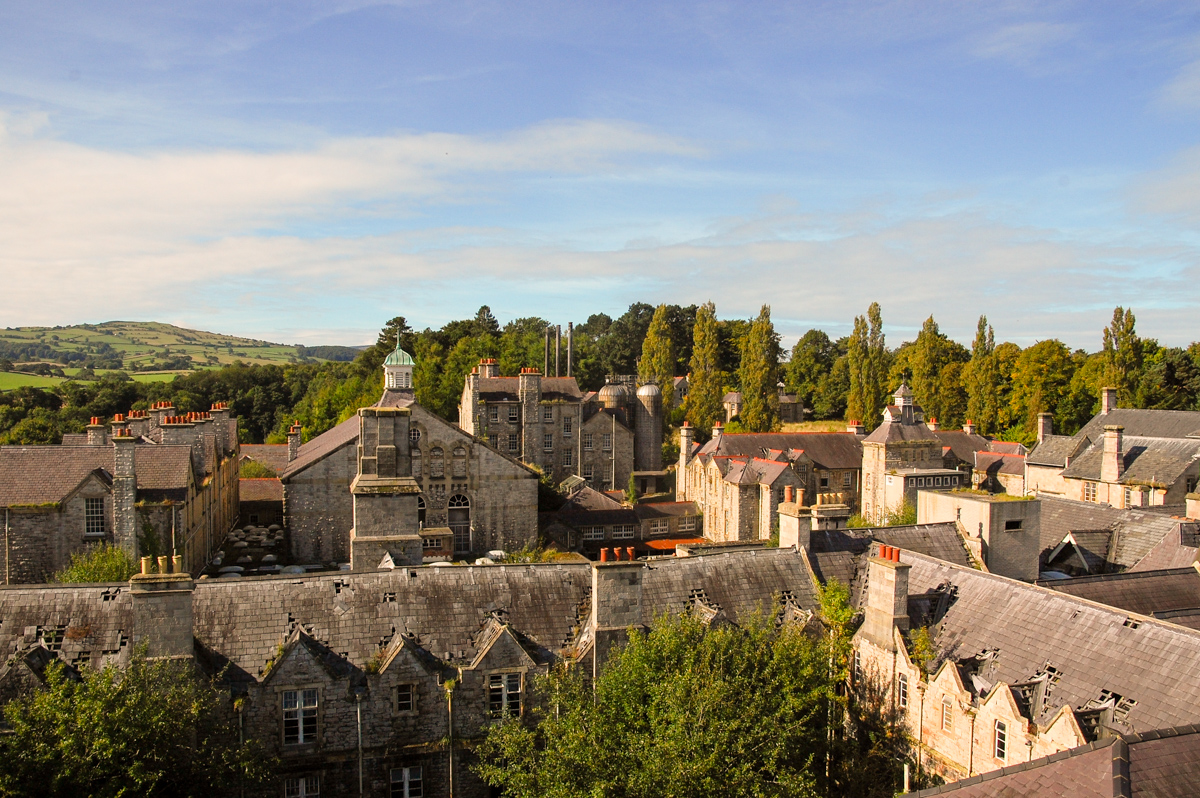 The main hall, a few weeks before it burnt to the ground 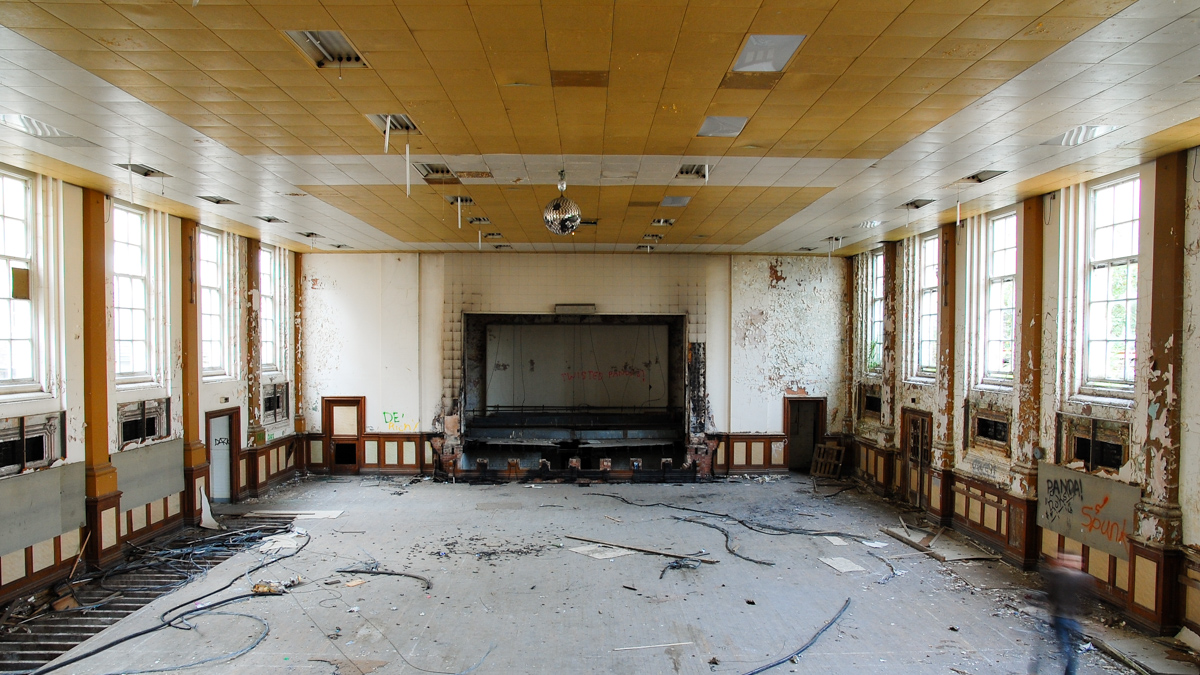 An old archive shot of the hall with the most incredible ceiling: 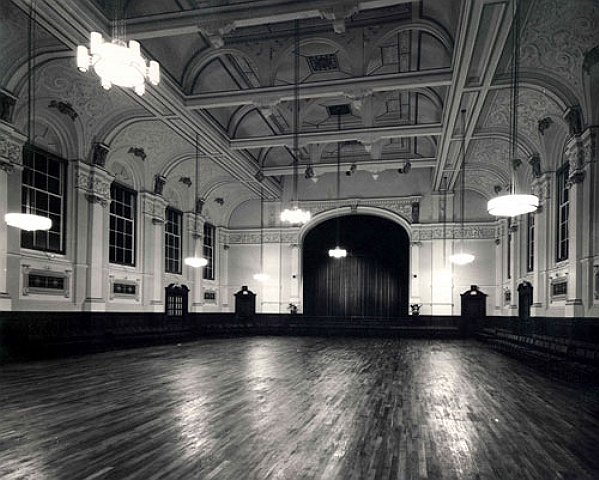 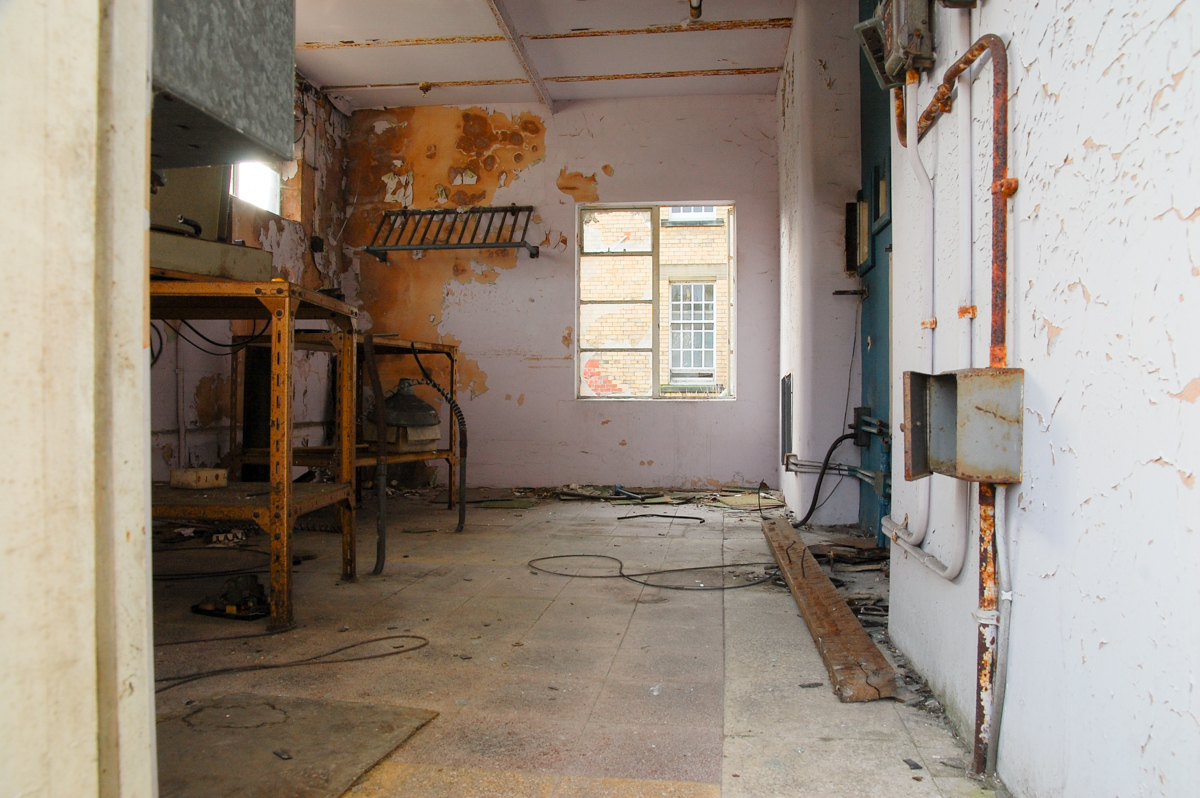 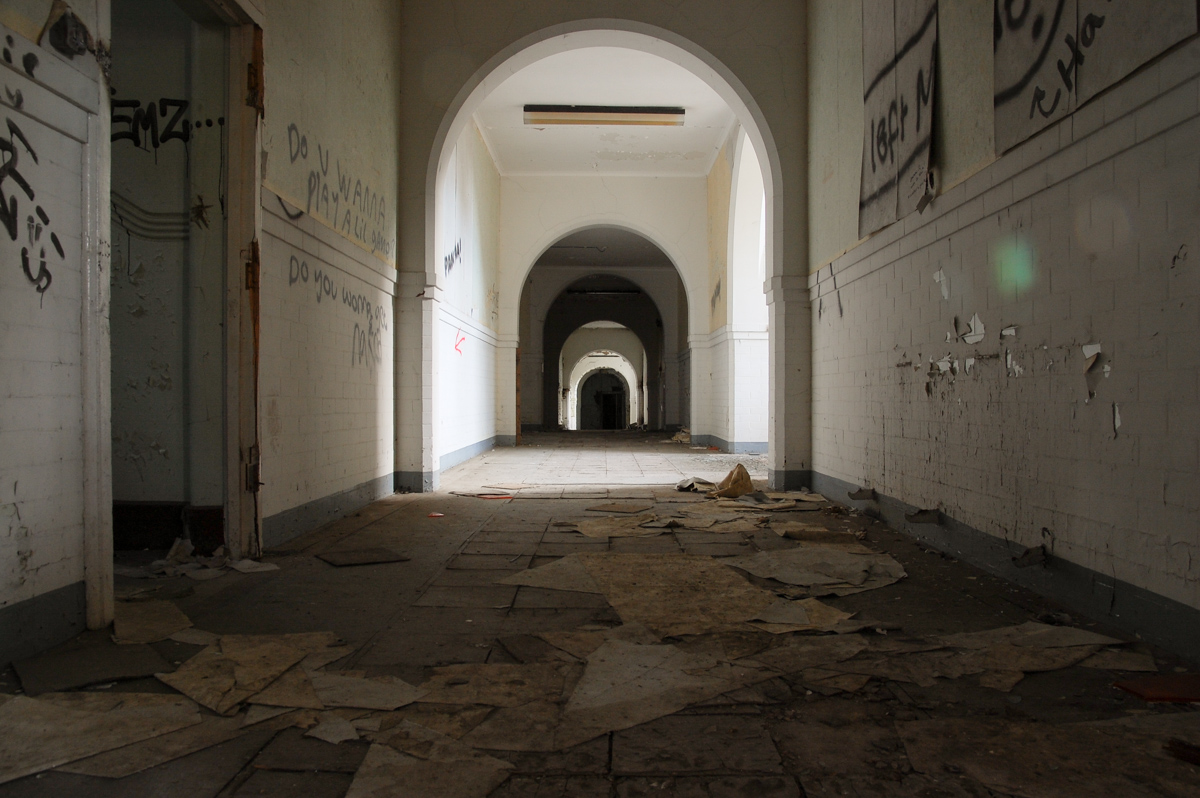 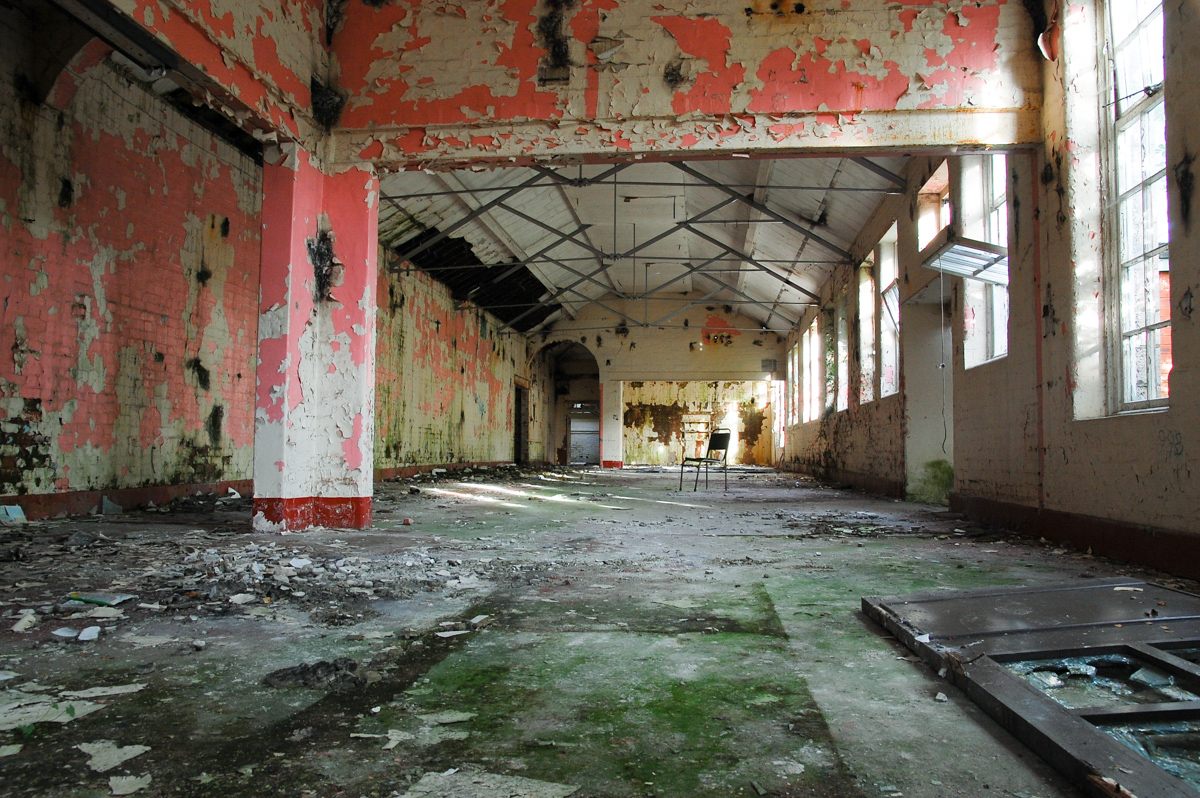 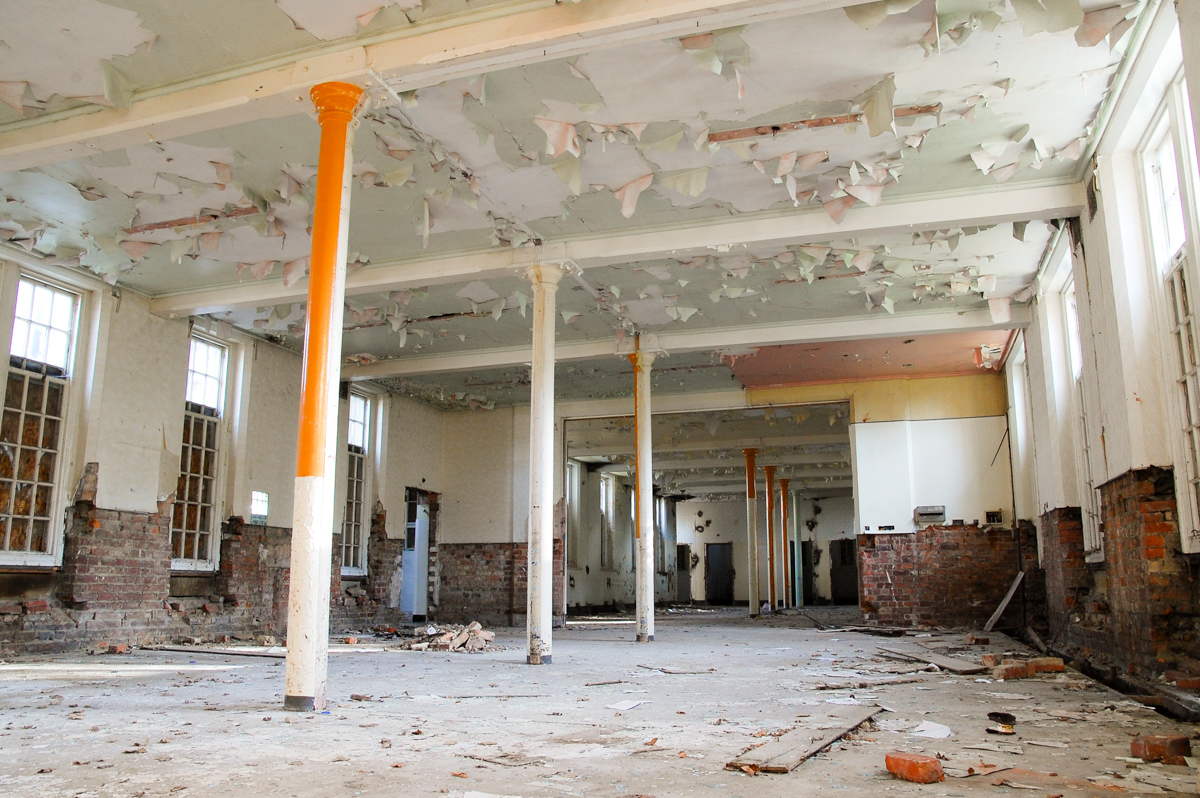 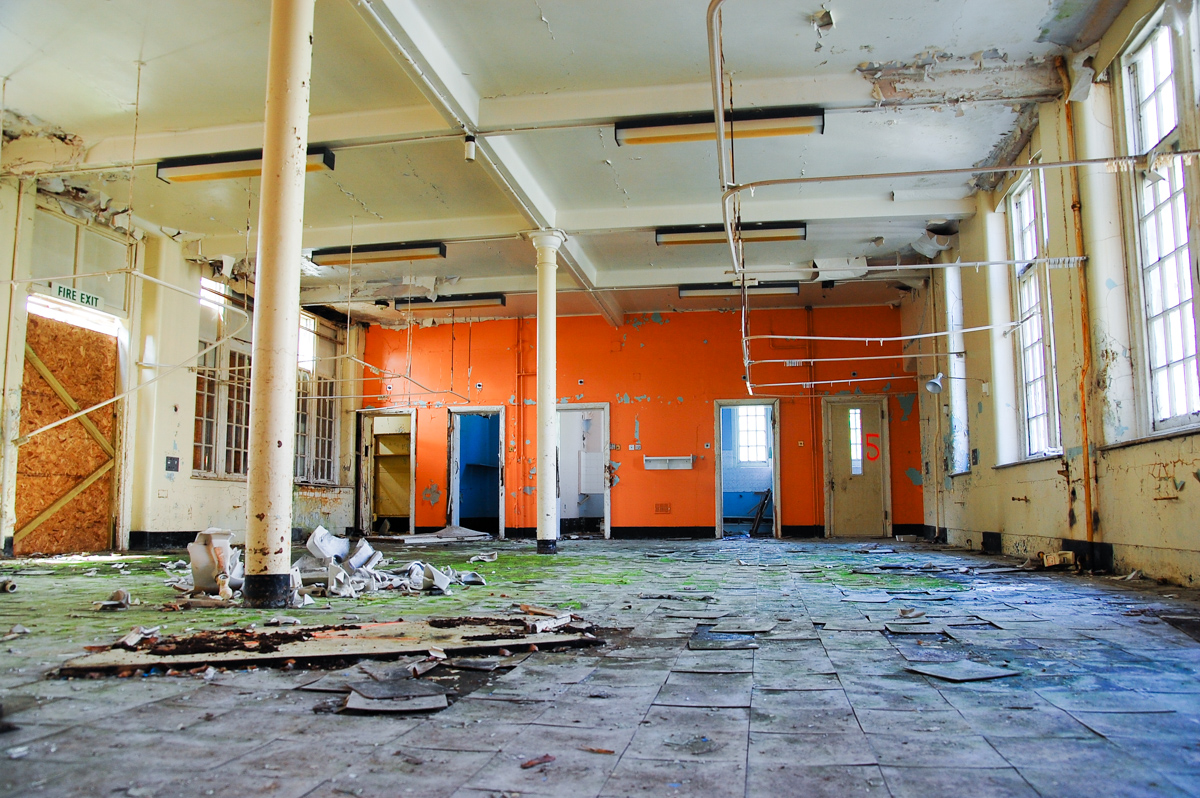 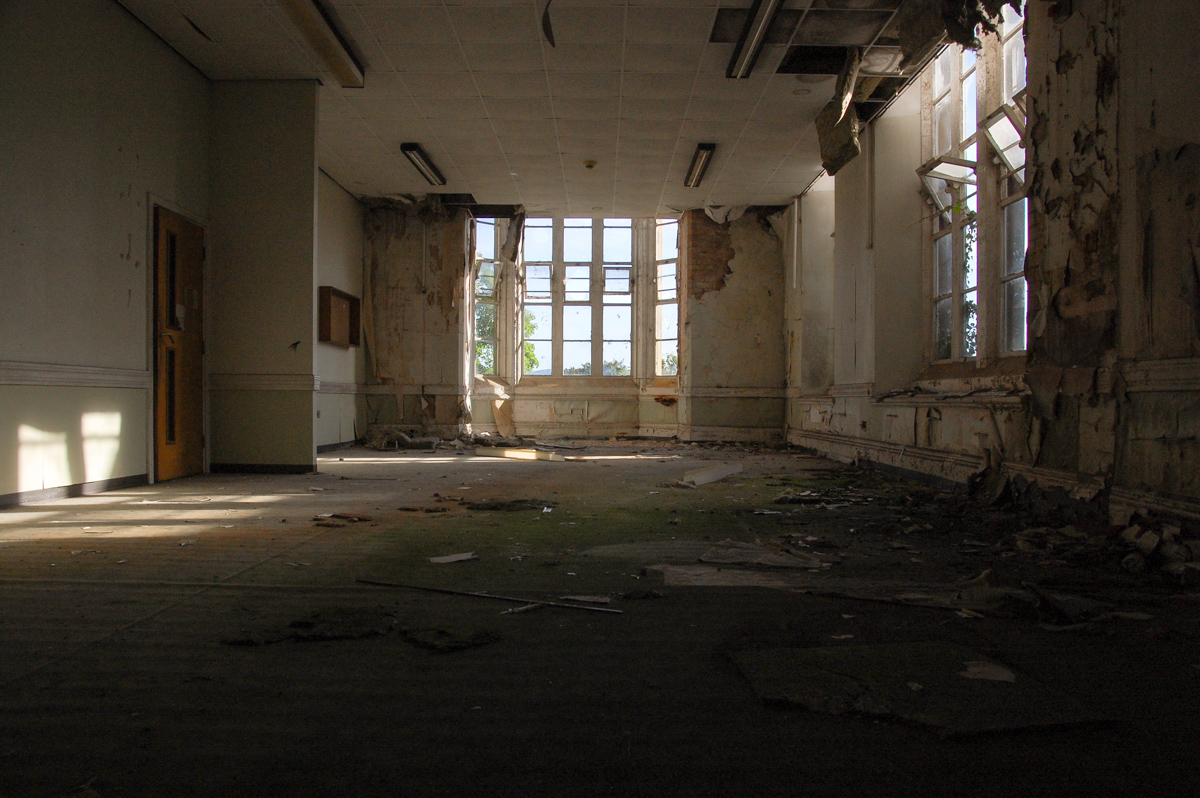 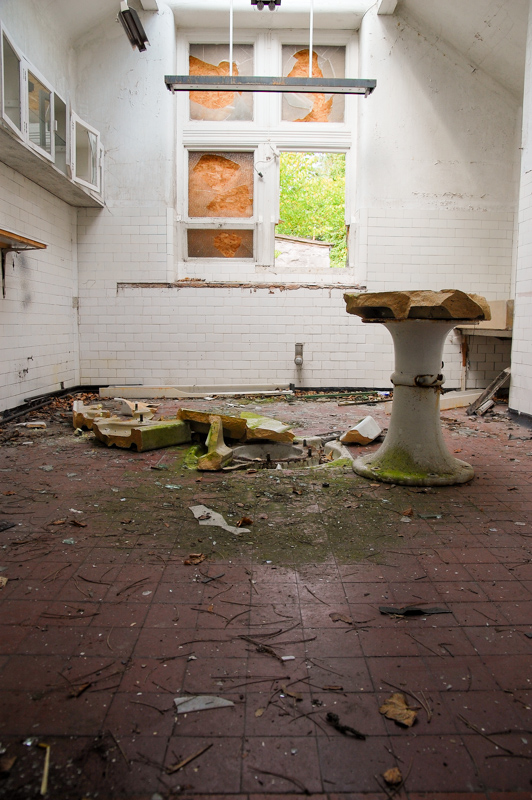 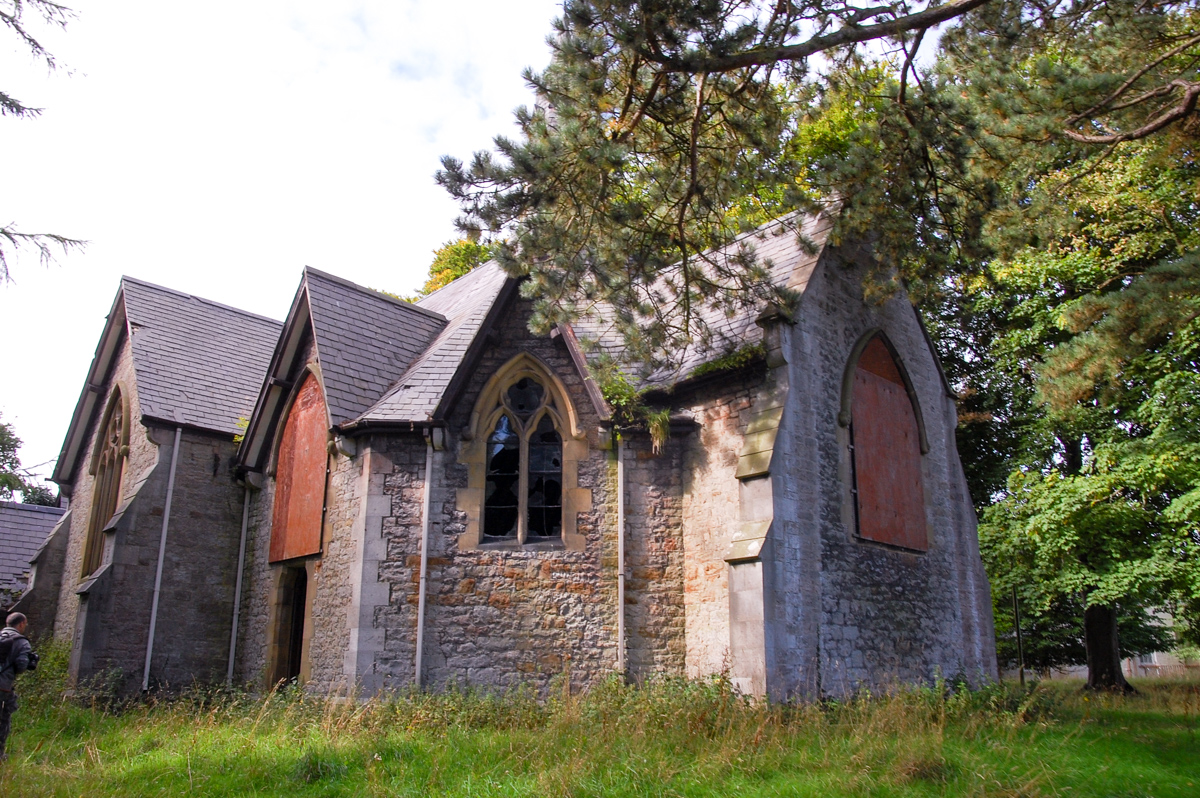 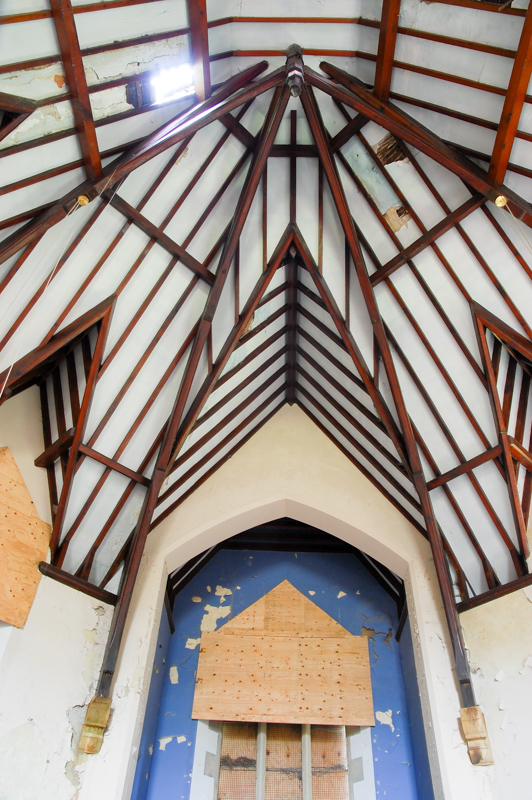 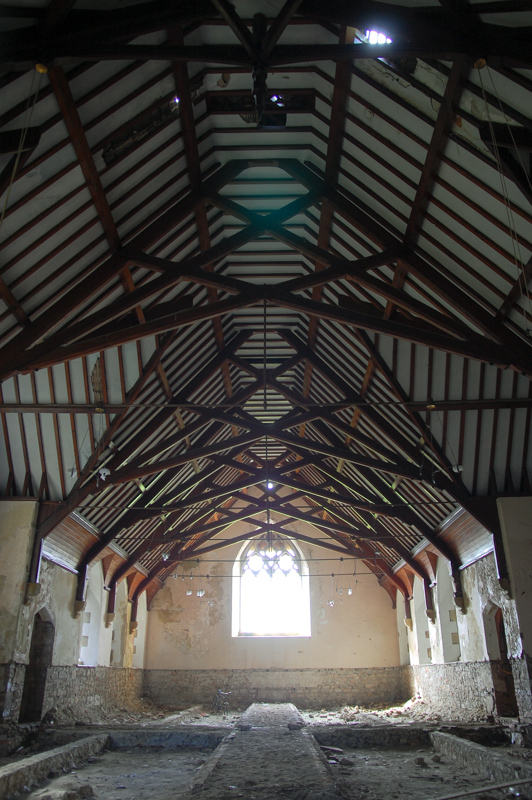 Regular User
Always wanted to conjure up a plan to remove that false ceiling in the hall, and then it was all gone
Website: www.whateversleft.co.uk - County Asylums: www.countyasylums.co.uk​

28DL Full Member
Me too. I want to say someone got up above there and took photos of what it looked like!

Regular User
Was thinking about Denbigh today as it's nine years ago to the day I went here with a large group of miscreants off here including bigjobs, Xan and others and we had a somewhat infamous encounter with Beardy!

It's such a shame they put that false ceiling up in the hall but given it's location and how cold it must have got in winters, I'm not surprised.

We got up the tower too that day, and I happened to take a shot from basically the same angle as you did - as you will know there was somewhat limited angles of photos you could get up there! Notice how much worse the sagging had got in that roof at the front of the photo too. 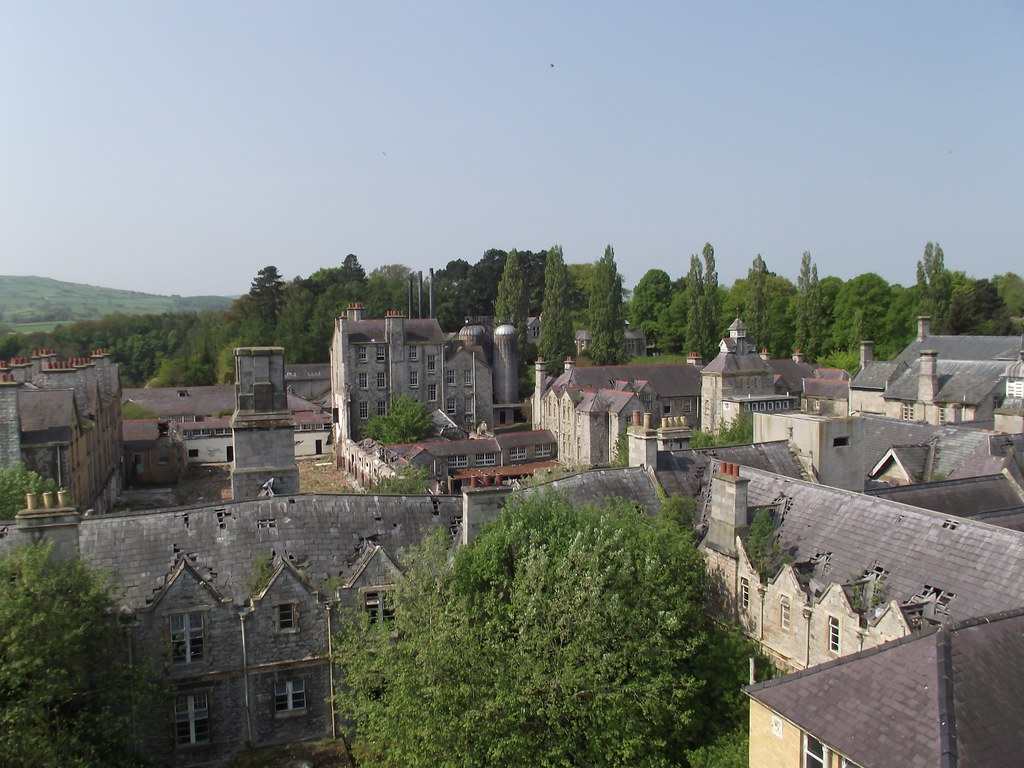 I'm not from Birmingham.
I don't know where 'Hunters House' is.​

Regular User
Did this hospital close down one day and then the next morning it looked like this? I'm struggling to imagine any other course of events.
Razorwire.rip

28DL Full Member
Haha, I expect so. I like to think it closed, the management gave to roofing lead to the staff as a payout, and it was a derp the next day.

TheTimeChamber said:
Me too. I want to say someone got up above there and took photos of what it looked like!
Click to expand...

I'm sure I've seen some pics of it where someone got above the tiles. Might have been SS
Website: www.whateversleft.co.uk - County Asylums: www.countyasylums.co.uk​

Olkka said:
Did this hospital close down one day and then the next morning it looked like this? I'm struggling to imagine any other course of events.
Click to expand...

I'd love to be able to go back in time and see it just after it closed and before the failed renovation attempt left it how it is.
I'm not from Birmingham.
I don't know where 'Hunters House' is.​

tumbles said:
I'm sure I've seen some pics of it where someone got above the tiles. Might have been SS
Click to expand...

Regular User
I must be the lamest explorer on here cos I still havent been!
It still looks a cool place so must go one day

Staff member
Moderator
Ah, so there was a time when it wasn't such a horrible mess to explore!
My Website -> Behind Closed Doors

Regular User
The Denbigh we see here is a beautiful Victorian Gothic building with features galore. Stunning ceilings, curved arches in hallways. Dips and pitches. Outstanding design. Stunning place. So sad that today Denbigh is Denbigh, the free for all. The starter pack for some! We no longer see the beauty it does still have if you look hard enough.


AndyK said:
Ah, so there was a time when it wasn't such a horrible mess to explore!
Click to expand...

Regular User
Nice to see it in fairly decent condition, I've only ever seen it first hand as an absolute wreck of a place!

Cheers for digging out OT's report too, that ceiling was something else.
http://www.ravenwing93.co.uk

Regular User
You're right even then it was trashed. Still, don't get to see many photos surfacing of it in that condition - that hall ceiling though! Even just seeing photos of the hall - aren't all that many who got to see it.


tumbles said:
Always wanted to conjure up a plan to remove that false ceiling in the hall, and then it was all gone
Click to expand...