28DL Full Member
I don’t know what they used to do here, but when you take a wrong turn off of Interstate 75 on your way to the USAF National Museum and find yourself looking at something like this, what are you gonna do? What ARGHHH you gonna do?

Maybe this was good enough reason to leave it well alone. But again, what are you gonna do? 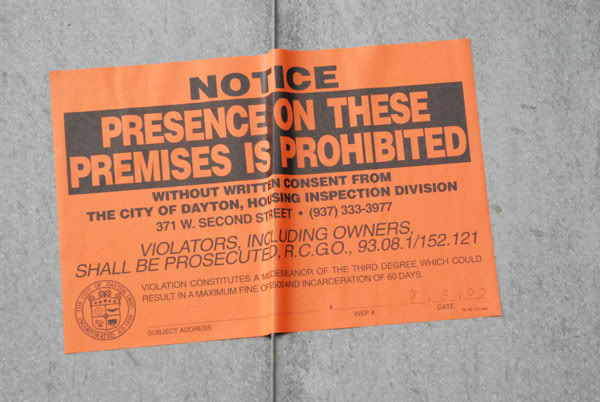 There were a great many reasons why I shouldn’t be doing this and 60 days incarceration sounded like just one of them. Inside though, the place is so wrecked that I had no clues as to what this place used to make. So, most of this is just some shots that I collected on the search for some internal steps up to the roof. There was no way I was gonna indulge in my initial plan of going up the fire escapes having just read the prohibition notices.

These looked like changing room benches but I’m not so sure. A strange pile of stuff to find – it just didn’t fit in with the rest of it all, almost like someone had collected it all up ready for something next. 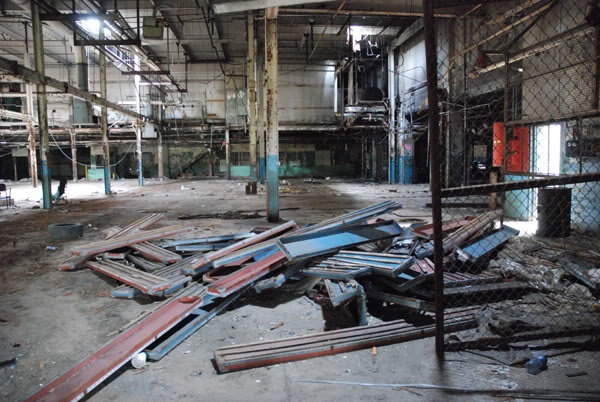 Plenty of open space and it was clear that the floors were divided into separate departments. In my good natured and completely naive way, I began thinking that this must have been a transformer factory judging by all the laminations lying around the place. But then of course, the realisation dawned that this is pikie activity just like anywhere else. They’d made a good job of it though. They'd left plenty tracks from their fork lift trucks around and no bonfires or car burn outs anywhere. 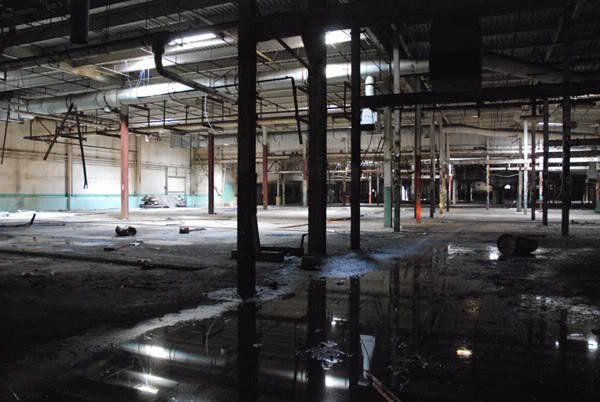 All the rest rooms are one flight up and there wasn’t a single Ladies around except in the office blocks later on. Most of these. like this one, were far too dark and rickety to be going up into and just seemed to lead to areas were there was clearly no structure or room at the other end. 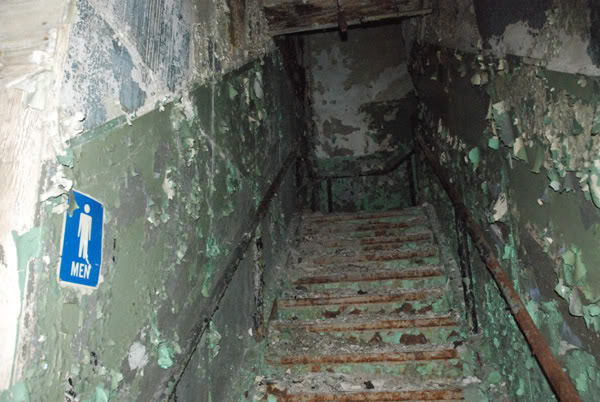 Some odd graffiti around. Obviously some sort of colonial Spike Milligan at work and what would I do if I was to come face to face with anyone capable of this sort of thing? Maybe I’d have to do my Cockney elbow dancing routine and that’d freak them out more than they could have imagined. Yeah, that’d do it, or was I loosing my own mind at why I was doing this at all in the first place. 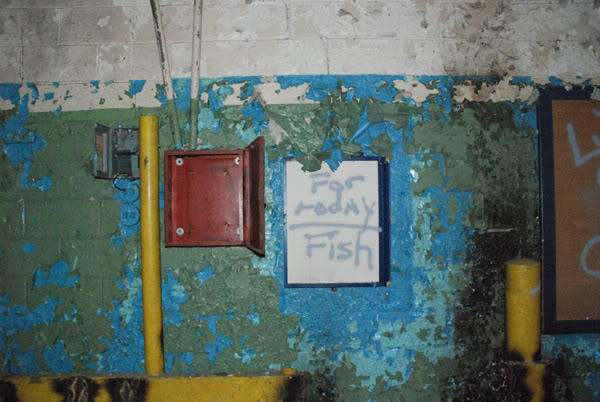 Chair, thankfully without short lengths of rope tied to it and ladders lying about. 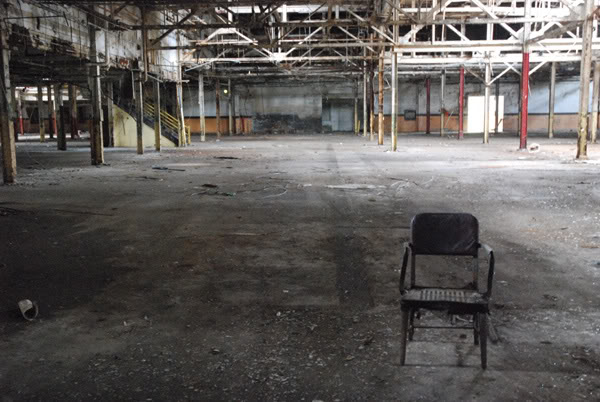 Now, I have never understood the US logic in their single phase being 110v and it makes even less sense that having their workers submitted to the perils of 460 three phase, if that’s what this is. I need to look into it more. 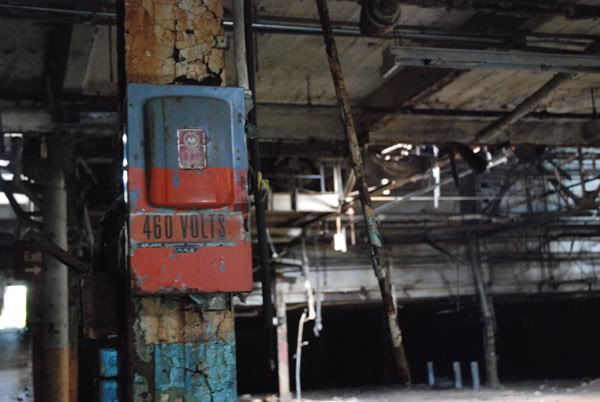 I think that this was an upstairs restrooms at some time. It was completely empty but the colours of the undamaged but degrading paintwork was looking good. I know I could have done better but all these shots are at very high ISO and a chest tripod and I didn’t want to go flashing off at all given the threat of real jail time. 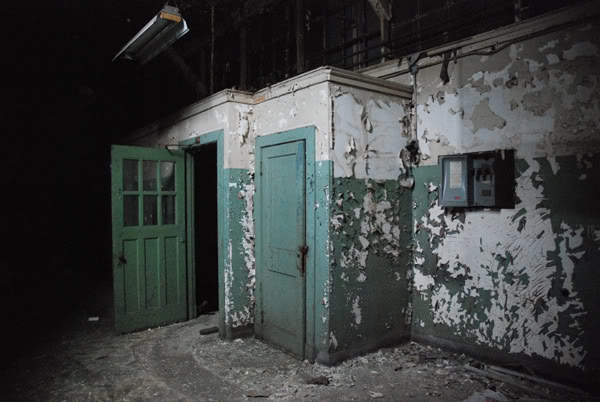 An evacuation plan found later shows this was a chemical store but I’m not sure if the bars are for safety or security. Not a very good shot at all, but the only one with the hat in. 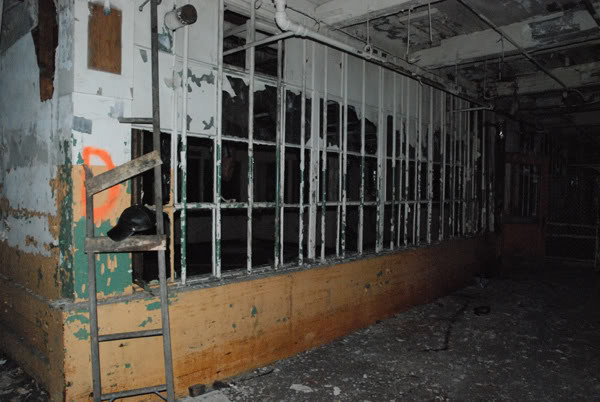 This could have been better as well. The colours and light were really a lot better than this, especially the white paint coming off the glass. 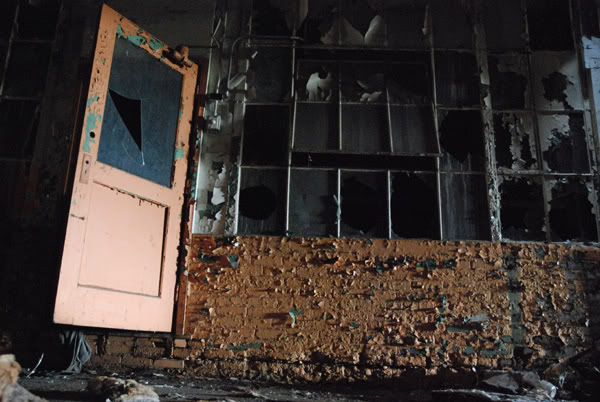 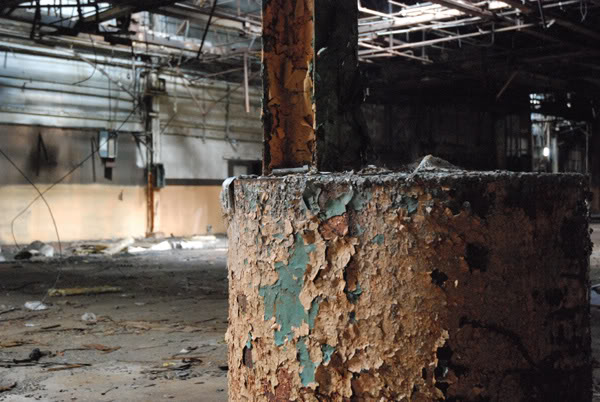 OK. I’d been faffing around enough with this place and hadn't found any way up. I'd wandered all over of the other side of the site a long way from the 7 storey blocks, so it was time to decide whether was going up or not.

False alarm with these steps. Just one flight up and a dead end again. 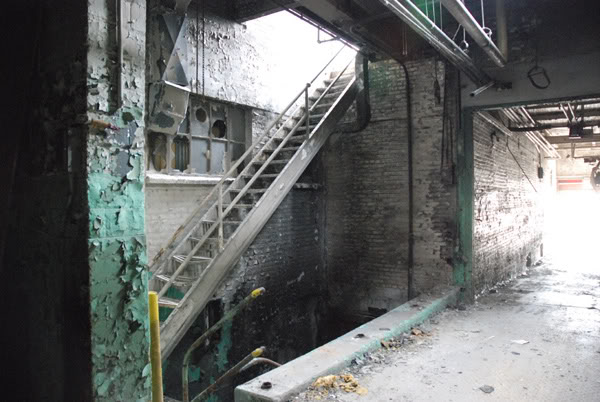 Found the oddest looking gadget on the roof here though. Bird cage springs to mind but I couldn’t fathom at all what it really might have been. 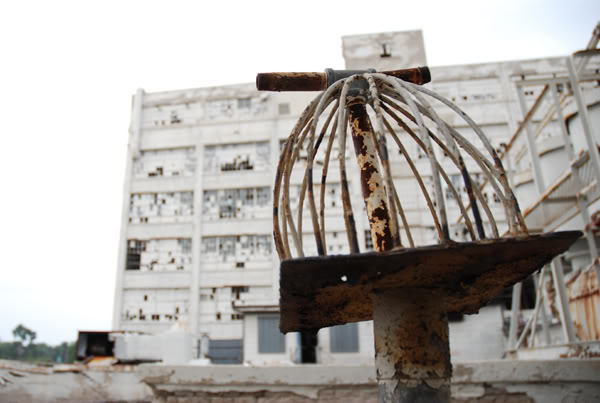 Another randomly sited chair. Why do people put them in the places we find them? There can’t be any good or nice reason can there? 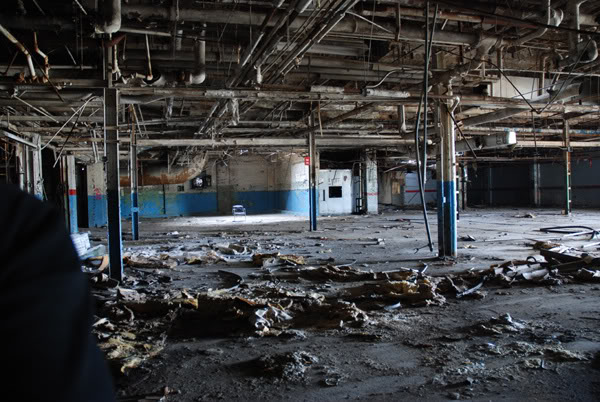 I’d had just about enough of it by now. It was so dark in places, I’d come across one dead (what looked like) dog and man hole covers were covered up with hardboard and the like. I was leaving, but then I found the lift and stairwell. What are you gonna do eh? 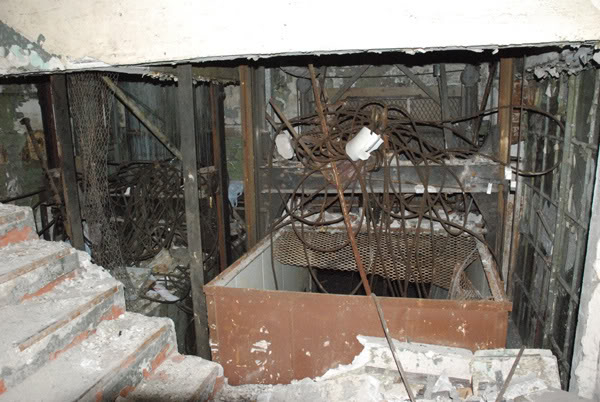 Looking back down at the ‘bird cage’ area. 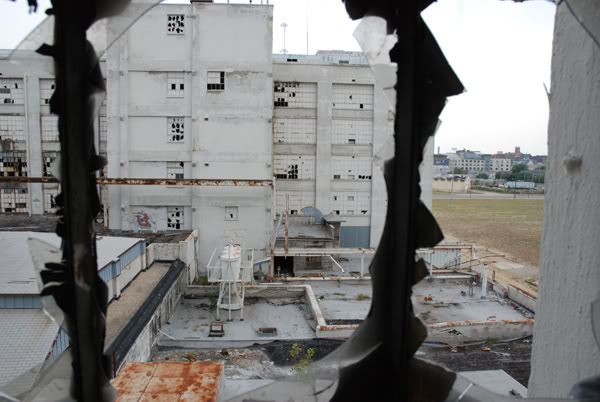 A few machines scattered around some of the floors. 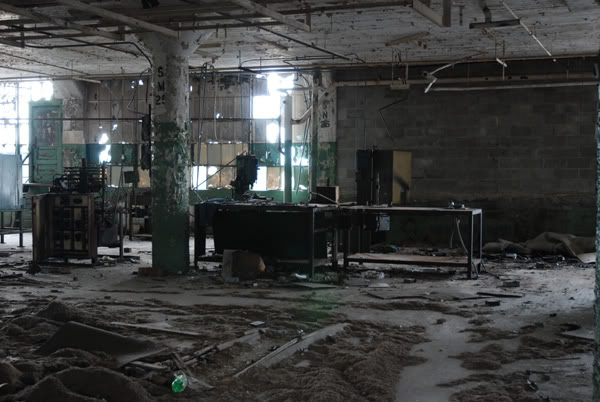 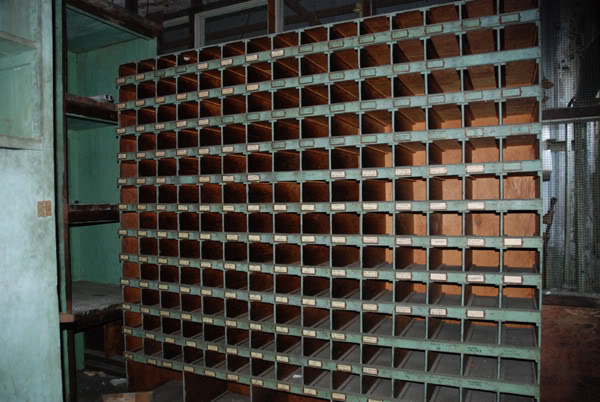 Well, I’d thought I’d cracked it and found the company name with this evacuation plan. How it’s survived heaven only knows, but Harrison turns out to be the district of Dayton that it’s in. Otherwise there is no clue as to what this place was. There are notes on there like welding, plating, front head, and rear head – all departments but still no clue to what they made. 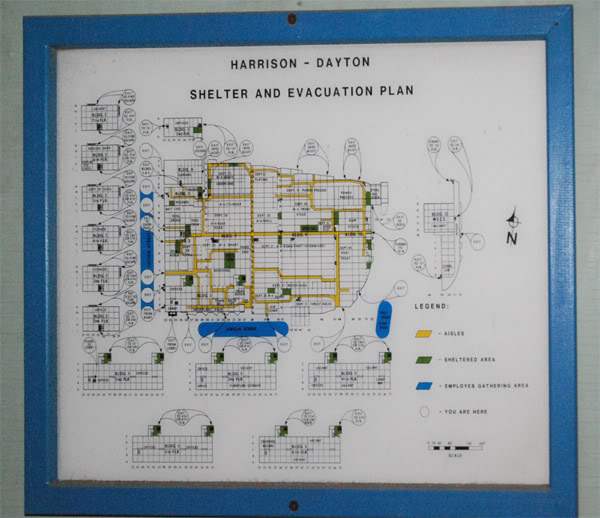 Up in the lift gear room the true professional work ethic of the US pikie becomes clear. Rather than slingin’ the whole caboodle down the shaft, they’ve actually taken the booty out bolt by rusty bolt. Top marks gentlemen. 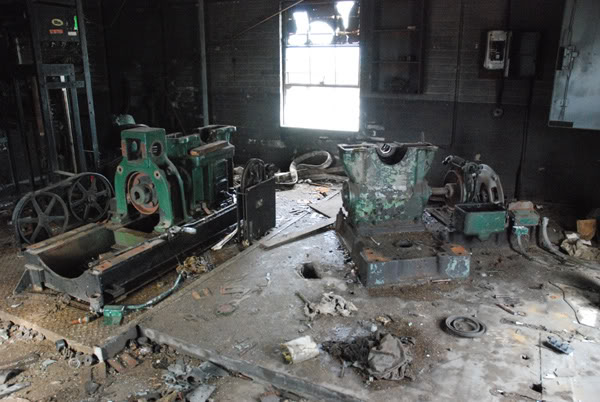 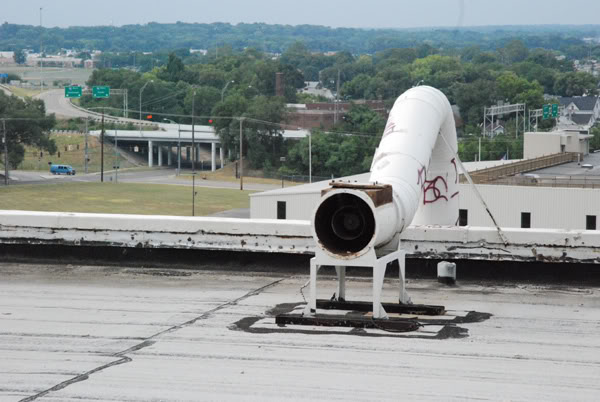 Oh, and did I find the air force museum? Well there’s a ‘Starfighter on a Stick’ - what more proof d’yer need? 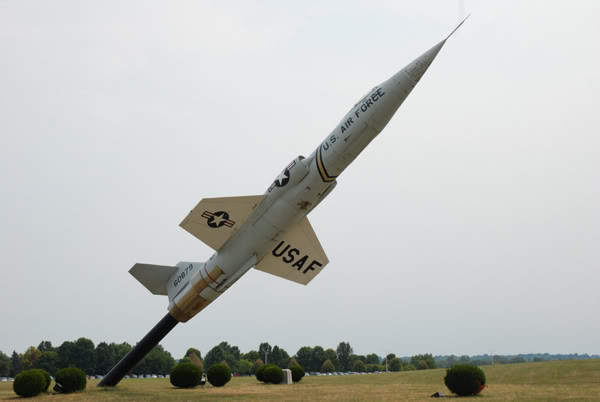 And the hat was well and truly back in the picture.