28DL Full Member
Disco Kitten and myself... and oh so very nearly Si o Doom and Nurse Payne who got to the wall and maybe a little further but (I think) had to turn home. Si will no doubt fill us in shortly.

SO!! Well well. Nice to get a walk in the country side for a change, rather than a lungful of pigeon shit! DK found a nice little parking spot, and off we went. As we head for the wall... well, it's funny how you see something and think "aye aye... someone been this way before?". A conveniently placed piece of wood, next to a perfect foot hold... over we go easy as.

15 minutes of skanking around in the undergrowth trying to stay off the lakeside path, but ultimately we are forced down. We come across the shaft for the outfall and manage to convince our respective auto focuses to play ball. There's a ladder down the shaft, but the hatch in the grating is locked with a motorcycle belt lock. Not that I would have been going down it anyway.

Then off we head round the lake. More dodging about as DK spots tail lights from a car. As we round the west part of the lake, I spot what I think is the way in. Up we climb, and find a door. "Wahey" we think. We have thought wrong but don't know it yet. A house and parked car is just about in sight so we decide to sit it out until dark. Maybe Si and NP will catch up with us.

We pass the time nattering about buildings, motorbikes, and other random stuff - inbetween watching the local wildlife creep around us. Were they pheasants? I haven't a clue. Then, sod it, let's go in. Down the winding ramp...

...oh. Oops. It's the boathouse. Doh! Still good though. Get some shots in there.

Then, well, it must be round in front of the house surely? DK puts a call in (Riddlers?) and yup, that's where we have to head.

Then we find it. The metal grated door is all there, as is the inner door. Just no padlocks.

And well, many of you know what's next.

Looking back at the pictures all I can say is... ber-fucking-limey. It's like something out of some kind of fantasy video game. Secret doors? Tunnels? Statues in the lake?

All we needed was a few more people and a dog, and it would be Enid Blyton material.

Big thanks to some of the usual suspects... OT on the nod about the door and for keeping us pointed in the right direction after the boathouse.

Piccies to follow in a moment. Nothing overly original - I never normally do "other people's" shots, but Witley seemed to demand I blatantly plagiarise. Cheers everyone. 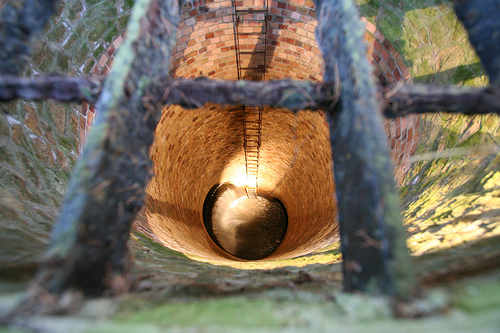 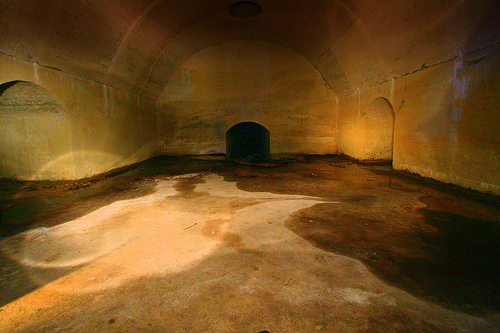 It was an amazing sky - fantastic moonlight, and lots of stars. So different than the gunky orange night sky I get living in London. 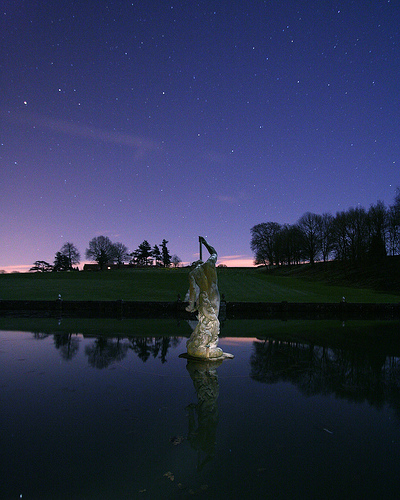 Well, we had to do this really didn't we?

Hats off to whoever did it first (sorry, I forget right now)

Auto Focus nightmare though. DK's D50 struggled as did my 350D. You can see this one is fairly off even though I though the AF had locked. And the viewfinder in the 350D is terrible for manual focus... as are my eyes. 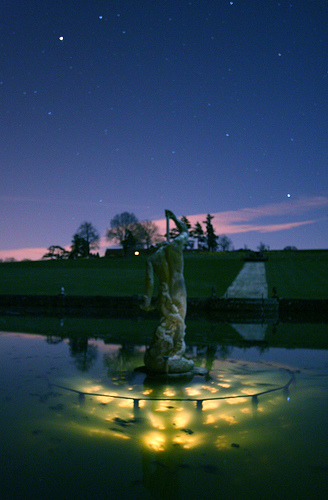 Moonlight through the dome. 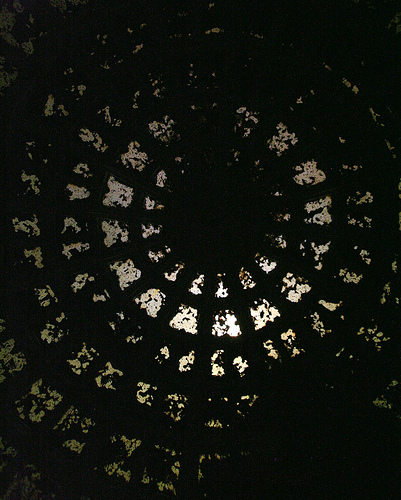 From the shore. Some random guesswork on manual focus finally gets something that looks ok and then it's time to head off. 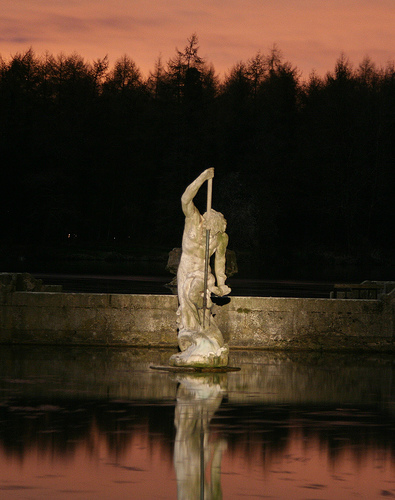 A door in the woods. 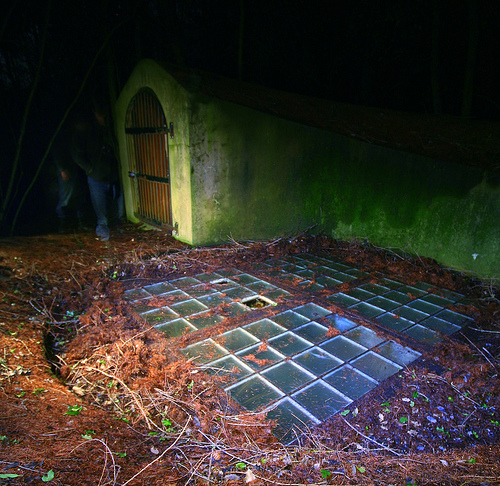 That'll be El. And... oh blimey another El. Two on one trip. How does that work? 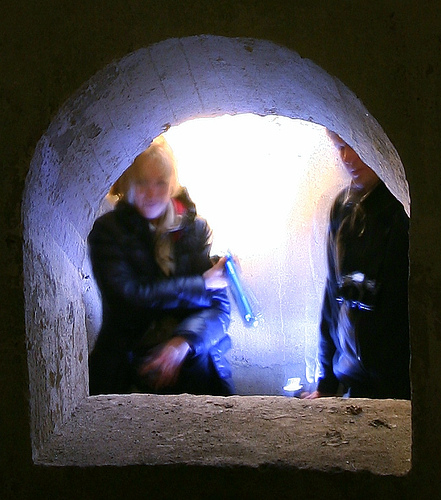 Is there light at the end of... oh yes, of course there is. If you let everyone else go first. 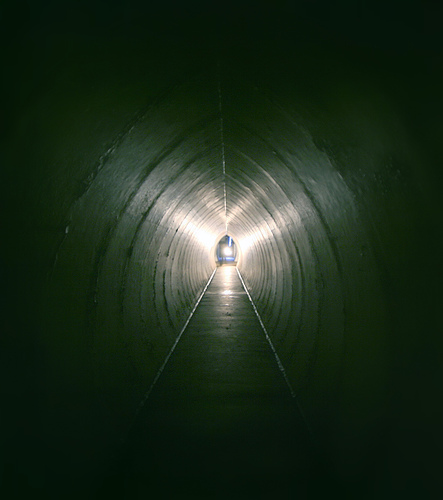 Is this Lutyens little creation? In modern day terms it's a bit like getting Sir Richard Rogers to design your shed. Whitacker Wright wasn't shy of spending his dubiously acquired loot. 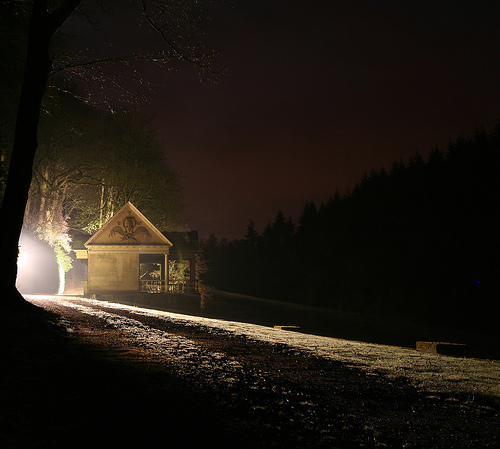 Not a big finale this one, but here's the inside of one of the (two?) rooms of the Lutyens thing. It's very simple, nothing very grandiose.

But the really great thing? It's mint. Untouched. A small patch of damp on the wall, slightly musty smell, but it's otherwise in "Live" condition.

As we poked around this thing, we triggered a halogen and also heard some weird humming noise kick in. No idea what it was but we decided to fuck off and on to the main event (which is in the earlier photos). 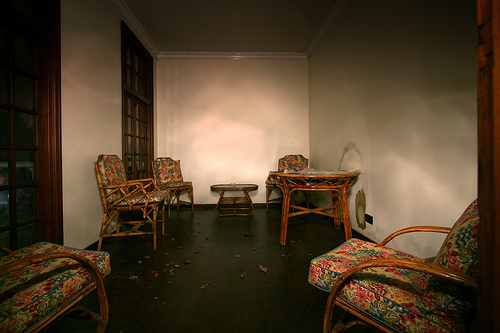