There are four transporter bridges in the UK, although the remains of the one in Runcorn are minimal so most wouldn't count that. The bridge as a whole was demolished years ago, but the former approaches, power house and former office building are still standing. The power house has been given grade II* listed status by English Heritage.

There’s also the Royal Victoria Dock Bridge, which is situated in the docklands area of east London. In fact, it’s practically next to the oh so familiar haunt that is Millennium Mills! It’s also situated next to ExCeL London, which is currently being used as a temporary Nightingale Hospital for coronavirus patients if needed. This bridge isn’t technically a transporter bridge, but it was built in a way that it could very easily be turned into one. A second construction stage was envisaged, which included a glass passenger cabin which would travel on a rail on the underside of the bridge thus making it a transporter bridge.

So with those technicalities aside, there are three full bridges remaining. One in Warrington, one in Middlesborough and one in Newport. They are of slight varying design, and all in different states.

I'll start with Warrington, also known as Bank Quay Transporter Bridge. This is in by far the worst condition of any of the bridges; it’s been properly neglected ever since closure in approximately 1964.

It was built in 1915 to connect the two parts of the large chemical and soap works of Joseph Crosfield and Sons. It is one of three transporter bridges constructed over the Mersey; another was built just to the north of this one along with the Widnes-Runcorn bridge mentioned above.

It’s listed on the National Heritage list as being grade II* listed, as well as the Heritage at Risk register due to it’s appalling condition. It’s currently owned by Warrington City Council.

A local group called 'Friends of Warrington Transporter Bridge' (FoWTB) was formed in April 2015 to act as the independent voice of the bridge. The group is liaising with other interest groups to safeguard the future of the bridge and its industrial heritage status. FoWTB have been featured on the local BBC News programme North West Tonight and have set up a website for the bridge along with Facebook and Twitter pages. In 2016, the bridge was nominated for the Institution of Civil Engineers North West Heritage Award.

We’d had a busy day, with a good half of it spent on the road. Warrington was only a quick stop off, but we all wanted to see it and tick it off the list. Parking nearby in a place so dodgy that I’m surprised a window wasn’t put through, we crept around the outskirts of the industrial estate it sits in the heart of. Over a bastard fence at the bottom then up. Easy stuff but it felt more bait than it was as its in such an open area with so many floodlights. You know the score!

We didn’t go all the way to the other side as the bridge felt like it would actually collapse in some parts. It was too cold for a swim so stuck to the more solid areas and the frame on the side we climbed up on! 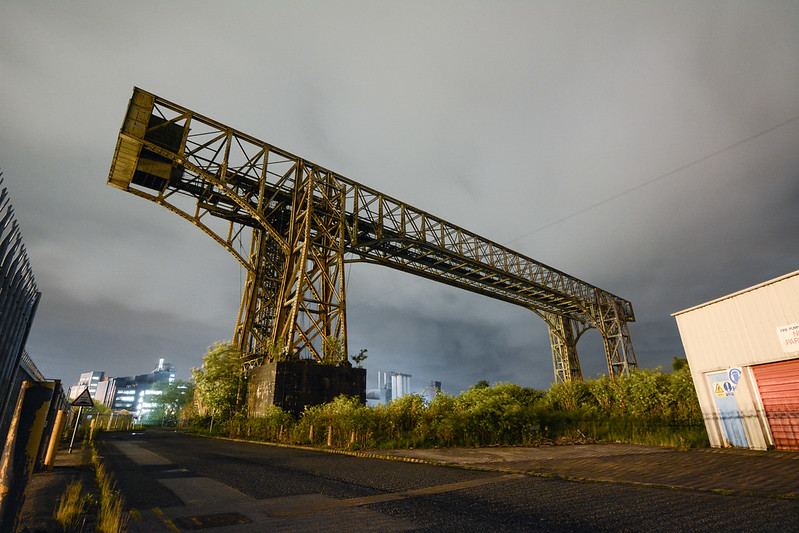 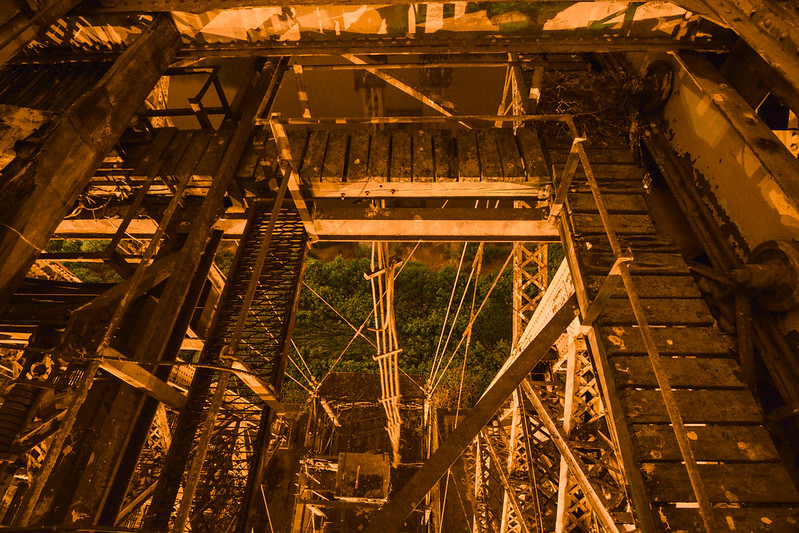 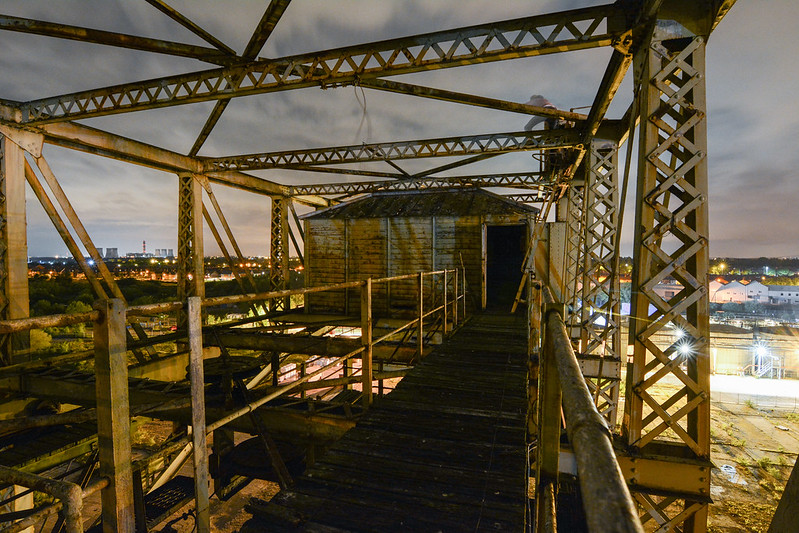 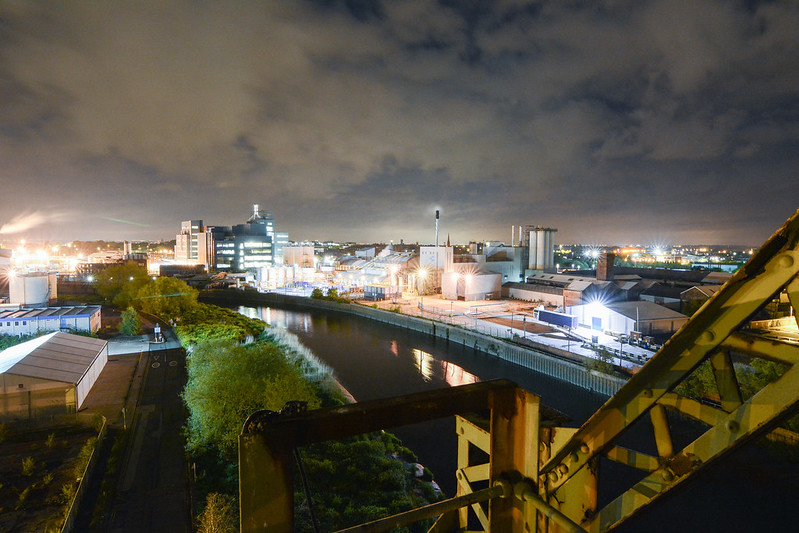 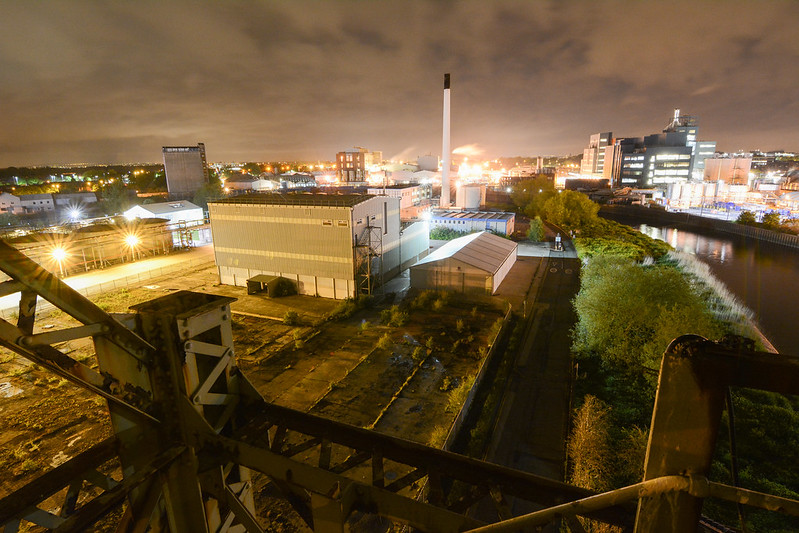 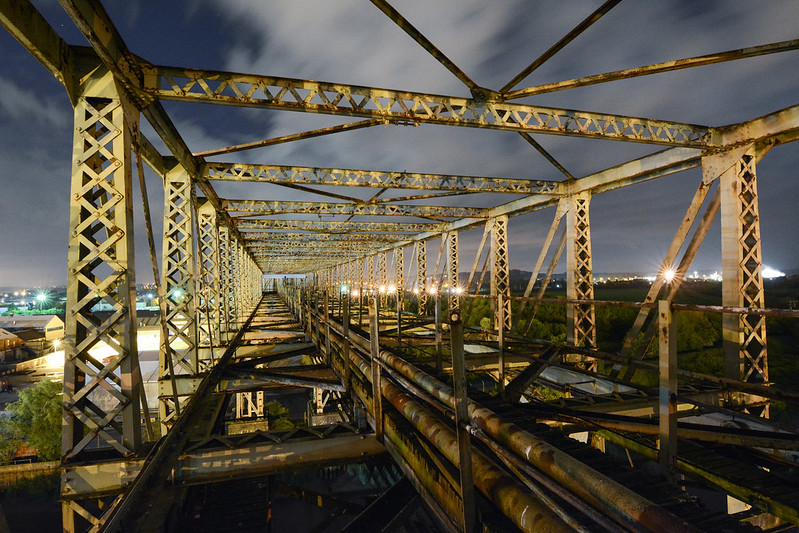 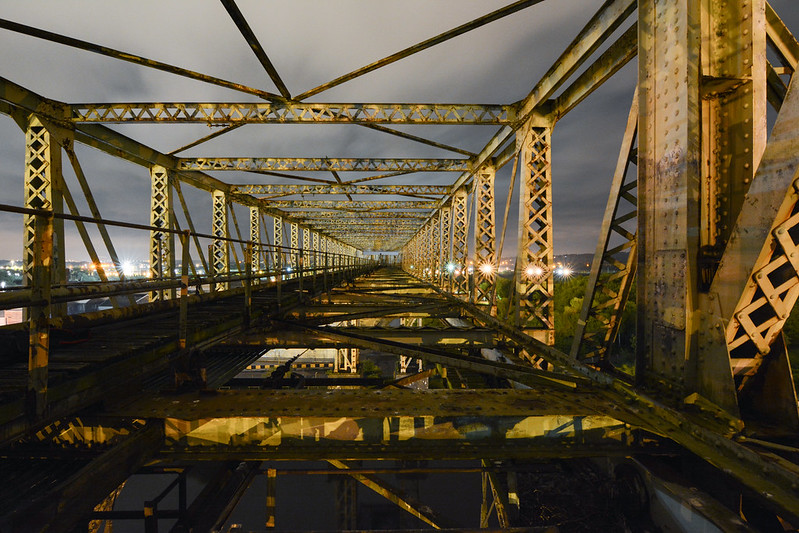 Next we have Middlesborough, otherwise known as the Tees Transporter Bridge.

It was built between 1909 and 1911 to replace the Hugh Bell and Erimus steam ferry services. It opened on 17th October 1911. The full span of the bridge is 851ft (259m), including the cantilevers, making it the longest remaining transporter bridge in the world!

The whole bridge was repainted in August 2013, closing it for 40 days.

This isn’t actually the only bridge of interest in Middlesborough - there’s also the Tees Newport Bridge - a lift bridge upstream of Middlesborough. It’s confusing as people sometimes get it mixed up with Newport Transporter bridge. Will upload pics of it one day I’m sure.

Story time: Our visit to this bridge didn’t go entirely to plan. Well it did.. until the final few minutes. We’d parked in the car park opposite, a short walk across to the steps up to the top. Six of us were present - five in my car and Callum on his bike. After being on the bridge for a good hour, we packed up and began to head down. As we started climbing down, an ear piercing alarm started from the direction of our convoy. Some of the local chavs were trying to steal Cal’s Triumph, and from what we could tell they were seconds away from putting the back window of the car in too. We all began yelling from the staircase to them, which of course they did not see coming. Cal pushed us out the way and bolted down six steps at a time and sprinted towards them in a rage. They then got spooked and jumped into a car that came flying out of nowhere. My car was untouched, but the wiring on the bike was a mess - they’d probably been trying to stop the alarm. Within minutes of us making the call, the 5-0 had turned up and we gave our statements about what happened. Whilst this was going on, two people wearing balaclavas came tearing down the road on some kind of golf cart type thing, slowed down next to us and the police, then sped off. The officers turned to each other and said ‘shit lads, they’re ballied up!’. They umped in the car and tore after them. That’s actually where the tag line on my account comes from in case anyone actually cares. We never heard anything from it, so assumed they were never caught, but as @Gabe put well: FUCK MIDDLESBOROUGH. Oh, and the bike still has bodged wiring even to this day

We headed back to our hotel in Hartlepool (eek) and quickly got back on the road the following morning after a quick brekkie in the local spoons. 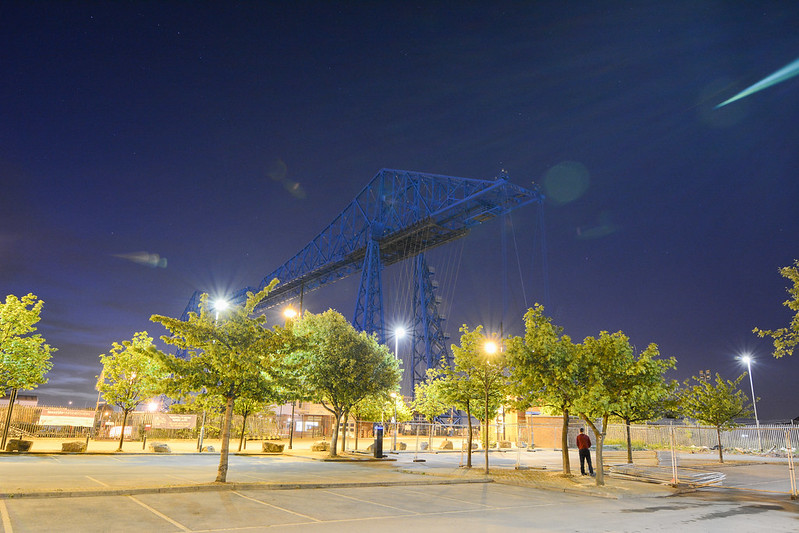 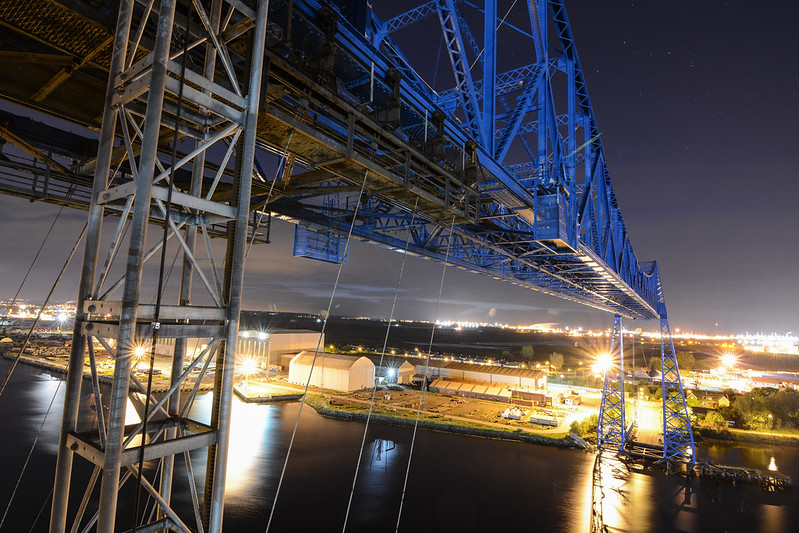 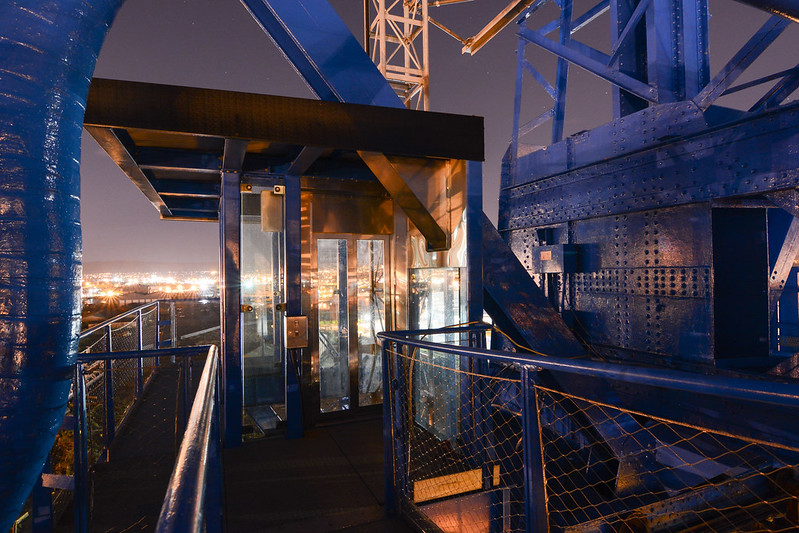 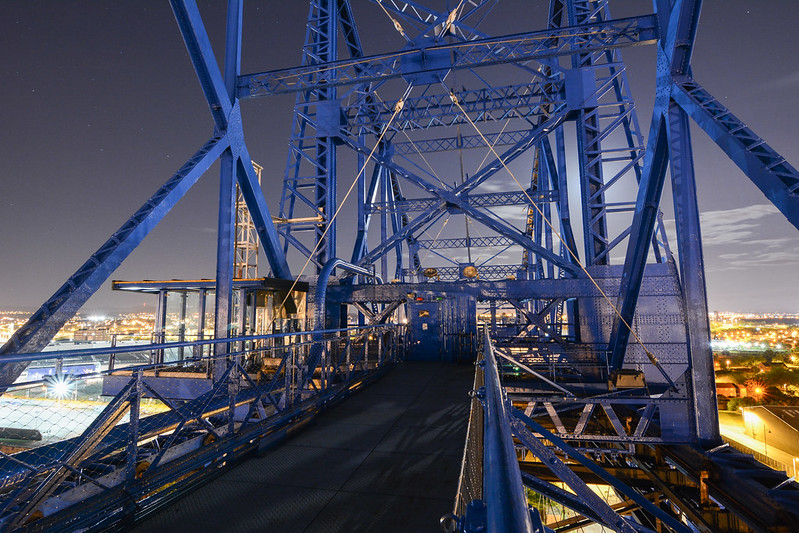 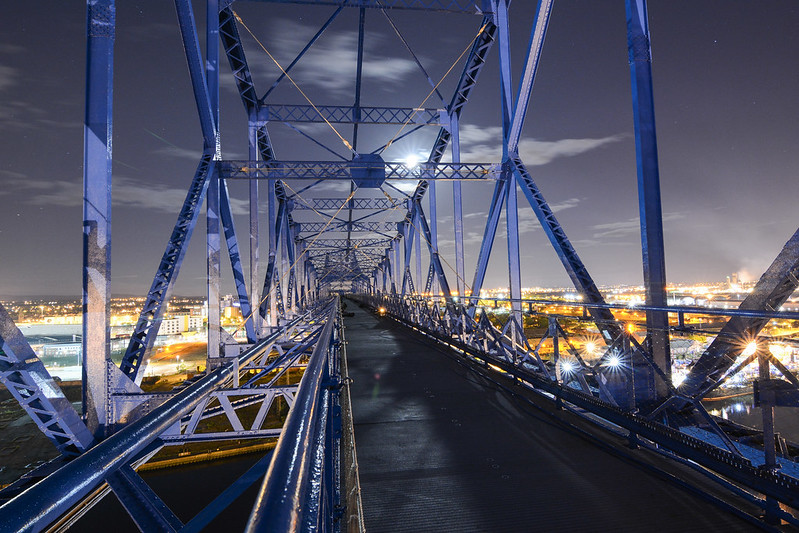 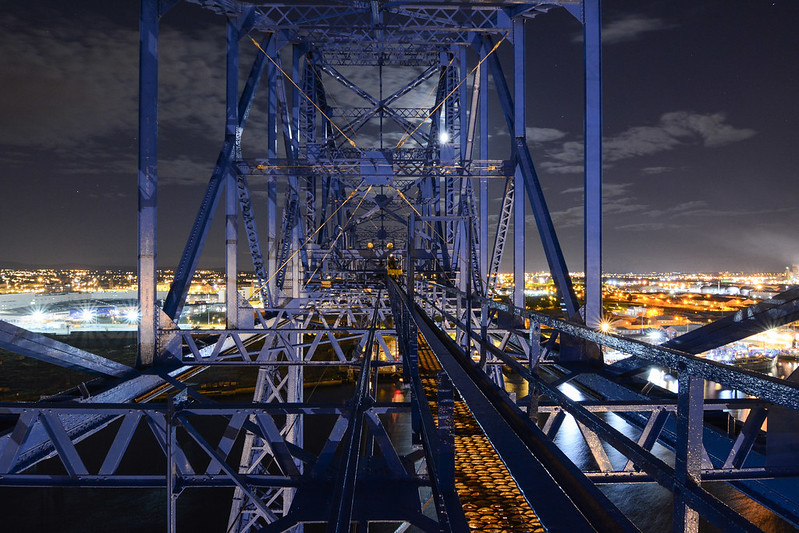 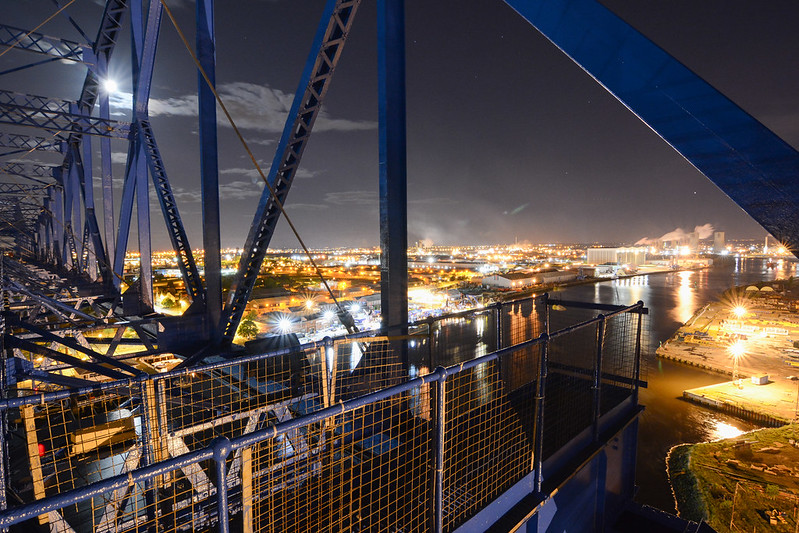 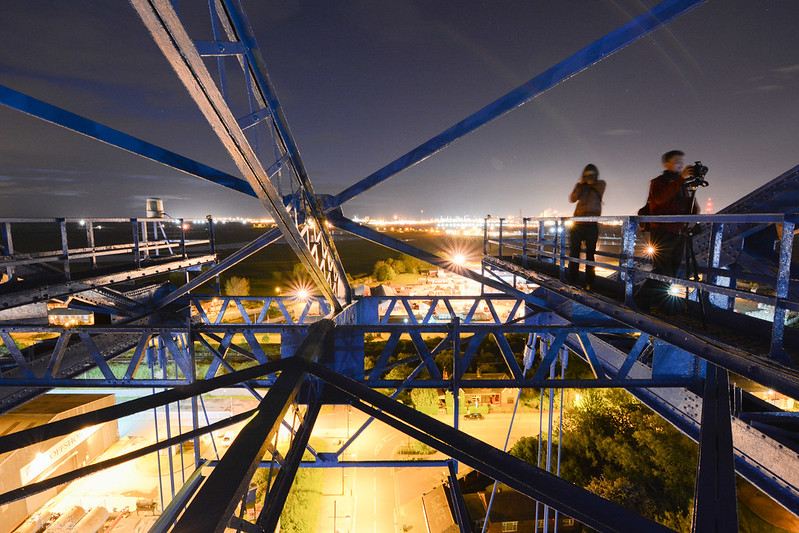 Last but by no means least we come to

This is my personal favourite of the three detailed here. There’s just something about it - it’s a work of art. It’s also the hardest to get onto - especially now with new cameras and additional anti climb paint! Still, it’s worth it.

This bridge is only known by one name as listed above, but in Welsh it’s called Pont Gludo Casnewydd. The Newport Transporter bridge is also in operation, one of two operational bridges in the UK along with Middlesborough/Tees. It was built in 1906 and opened on 12th September that same year.

The bridge has an overall span of 644.88ft (196.56m), with the total length being 774.28ft (236m). This means that it is shorter than the Tees Transporter, however it is taller. The height of the towers is 241.5ft (73.6m) making it the largest of the three in the UK, as well as the largest of the eight bridges in the world of the same design. The structure is grade I listed and is the lowest crossing on the River Usk.

It’s the oldest transporter bridge in the UK, so it’s even more impressive that it’s still operational - that’s partly why I love it so much. Between 1985 and 1995 it underwent a full refurbishment to the tune of £3m. It remained fully operational until December 2008, when it closed again to have a further refurbishment costing £1.225m, reopening in July 1010.

Newport City Council own and maintain the bridge, which includes a visitor centre on the west bank which is open at weekends.

Naturally, being Wales, it’s been either raining or wet whenever we’ve been to visit this bridge. Despite having been up it a number of times I don’t actually have any great photos from it - maybe I didn’t bother as it’s only down the road from me - who knows. Either way; big up NTB <3 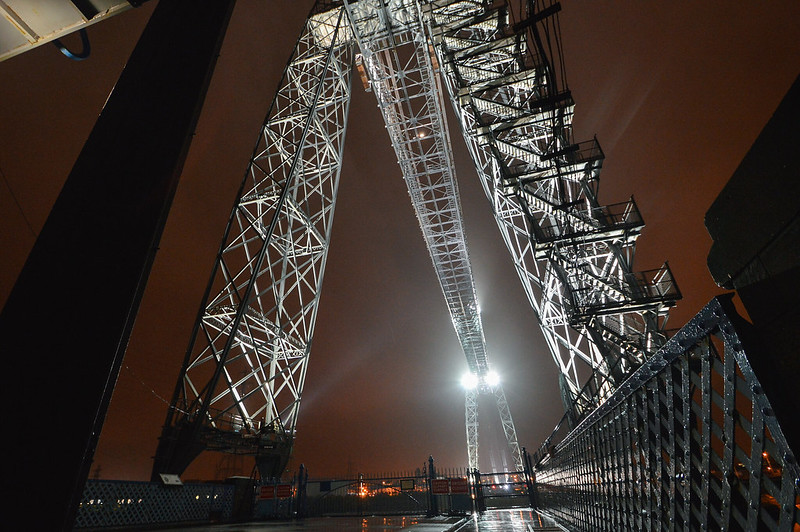 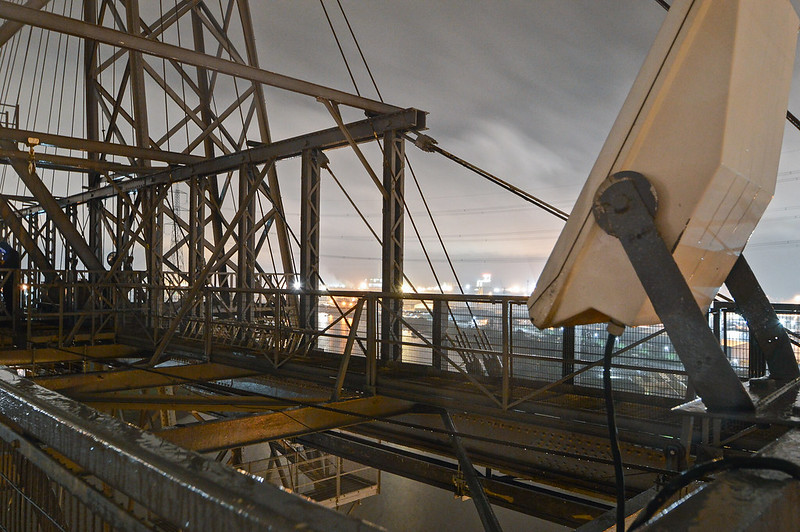 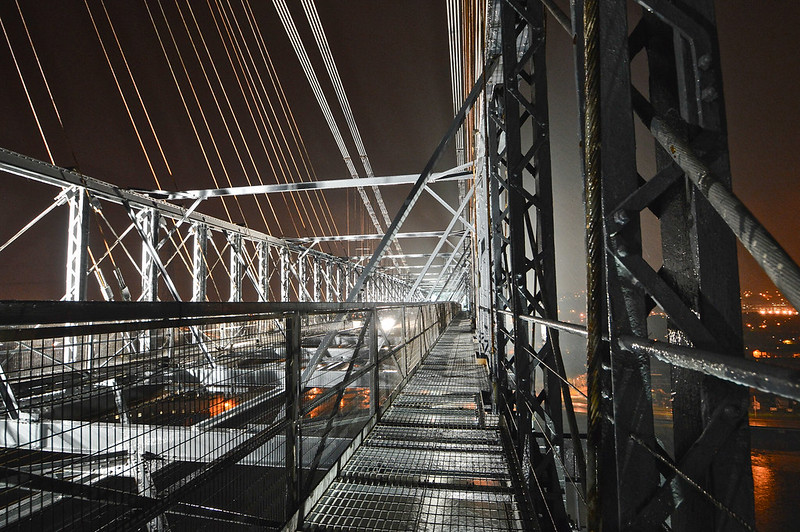 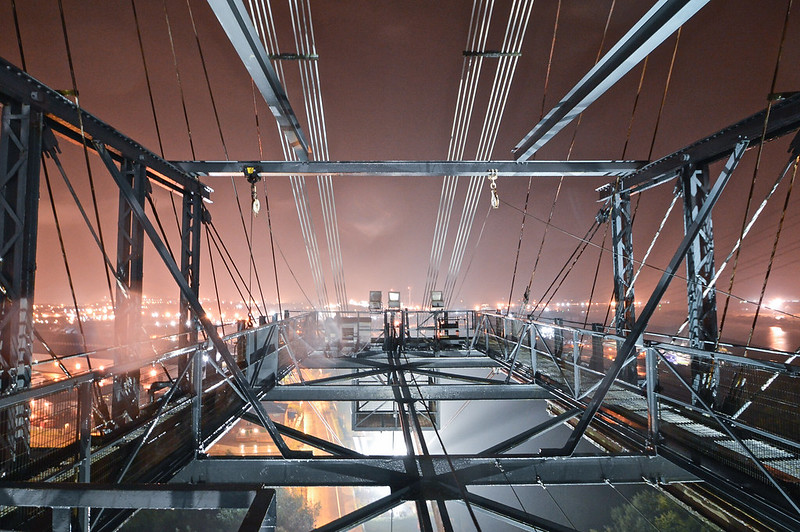 Then the lights went off 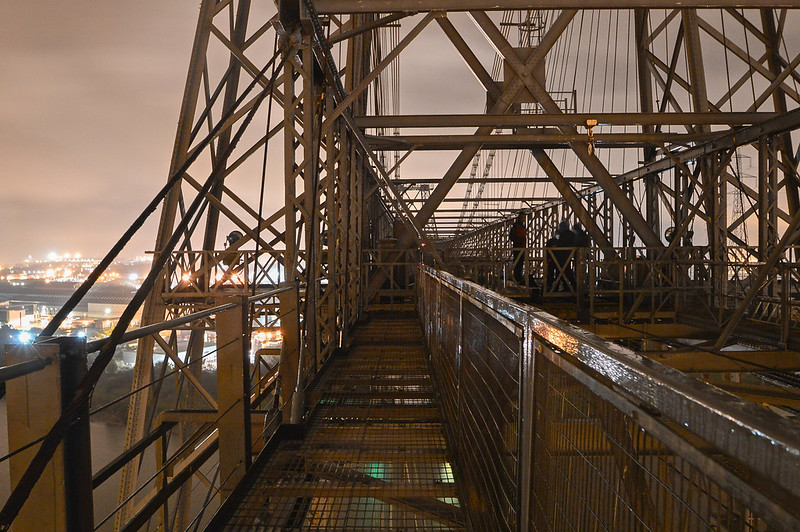 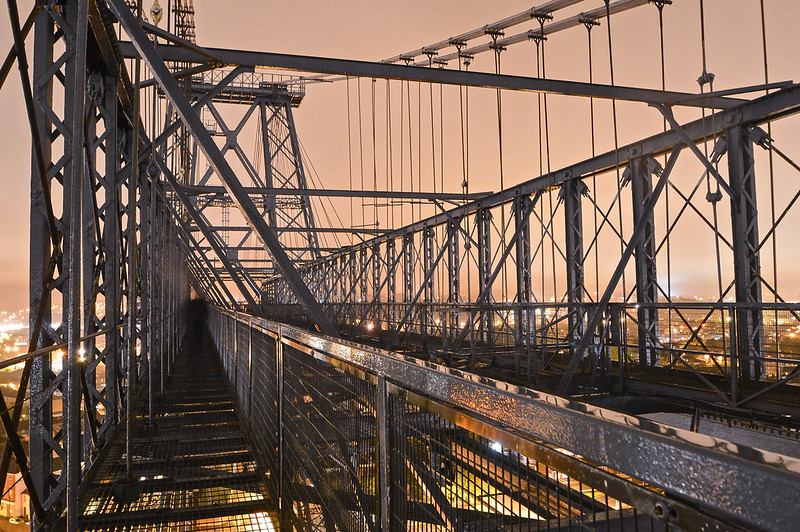 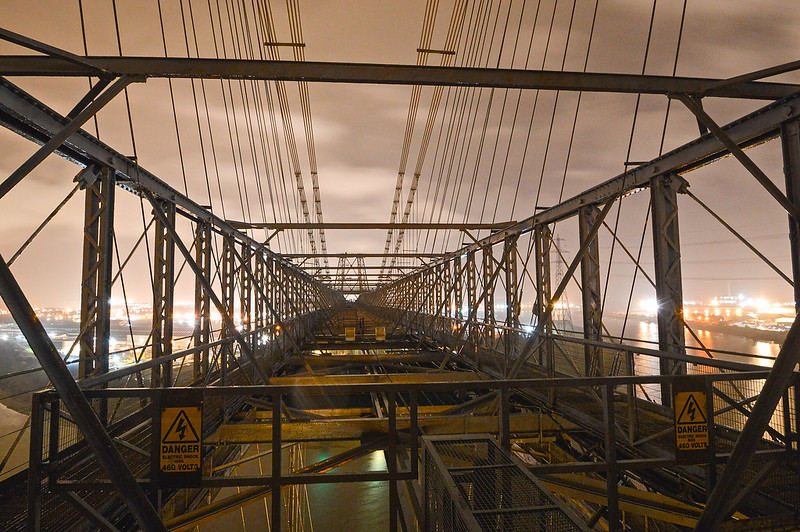 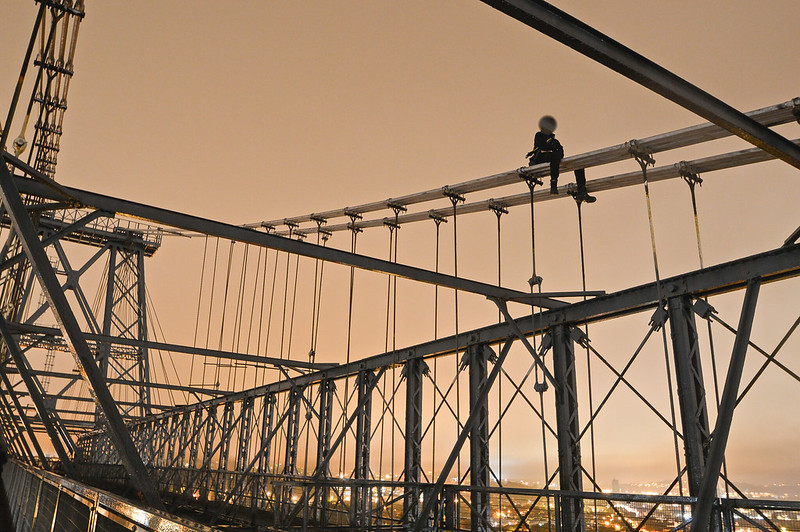 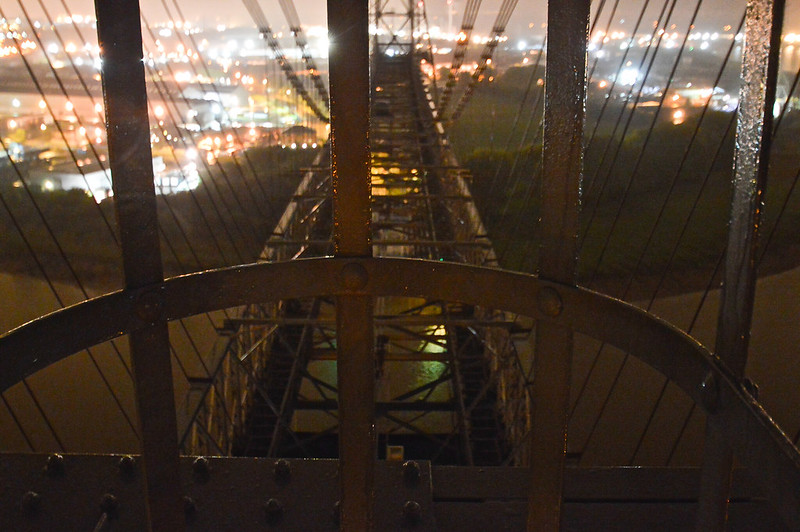 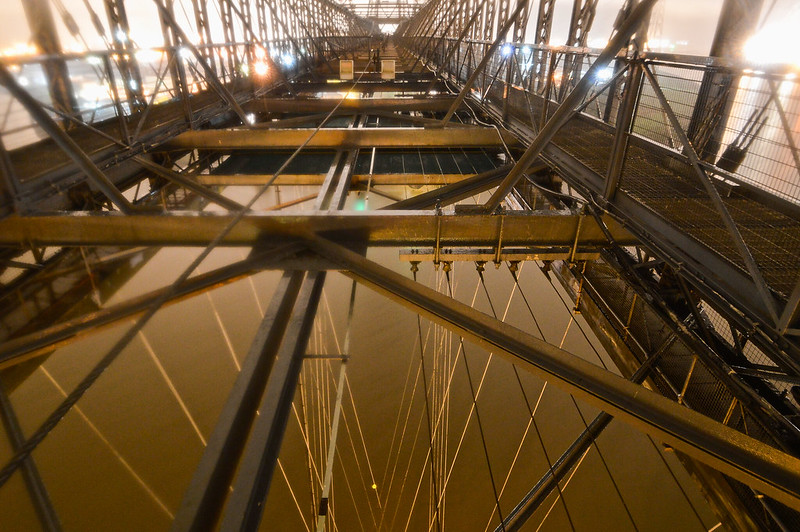 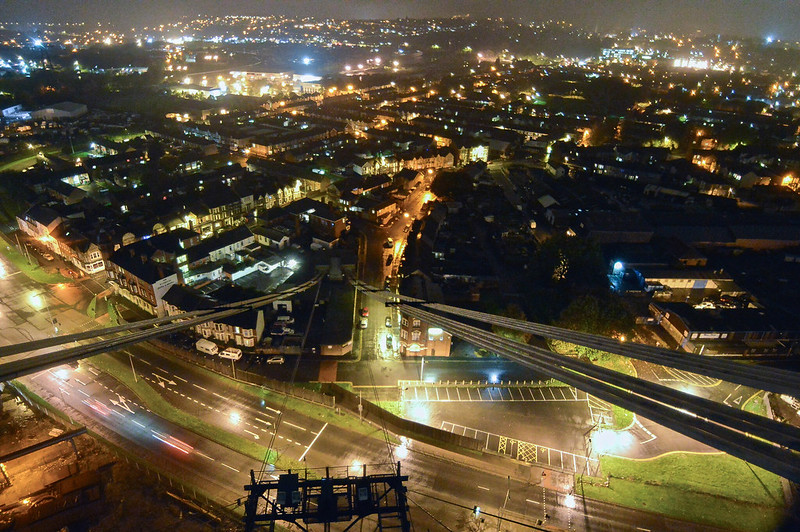 And on another occasion - @WhoDaresWins doin his thang 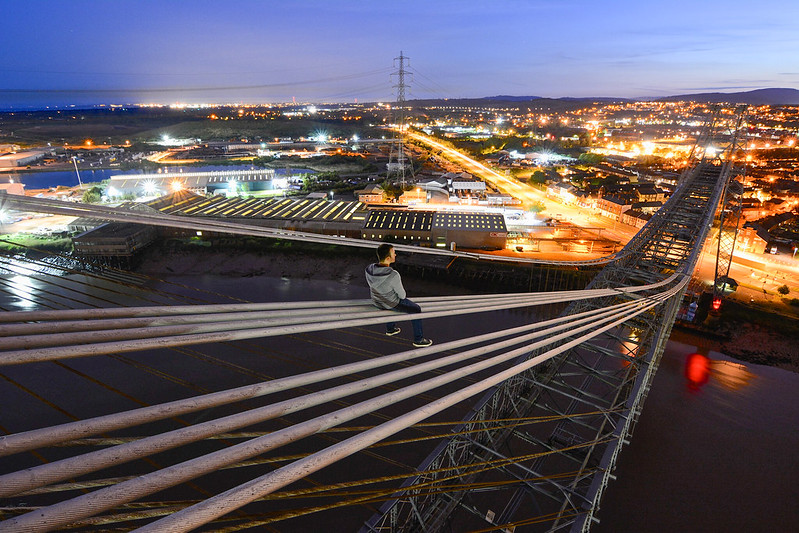 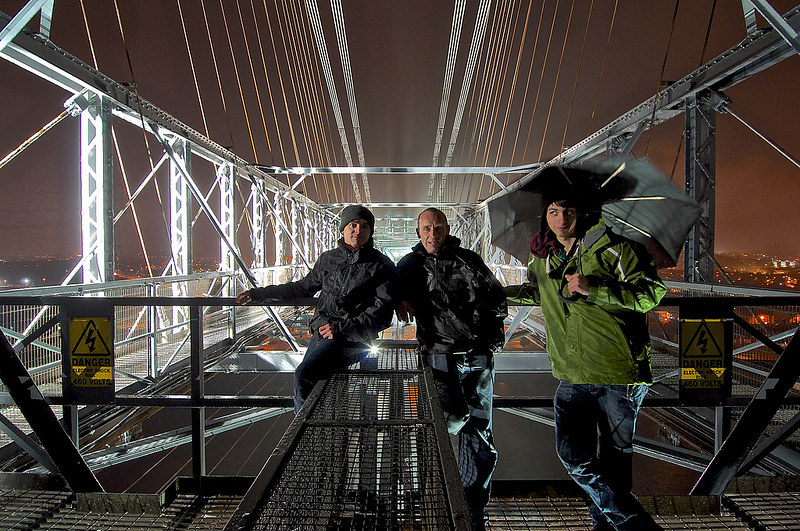 Regular User
But what about the forth one
Website: www.whateversleft.co.uk - County Asylums: www.countyasylums.co.uk​

tumbles said:
But what about the forth one
Click to expand...

Staff member
Moderator
Cracking job, good to see these all covered in one report
My Website -> Behind Closed Doors

I never realised the one near the excel was designed to be one too. Would make getting over the river easier lol
Hi

Regular User
Excellent report. Loved the read. Glad the bike wasn't taken. Who`d of thought bridges could be so fascinating. The two live bridges are so old too! thats impressive. Like the processing of your shots, very nice.

Regular User
Good reporting. Great that we did the still standing. Still got a lot of love for them!
www.strayoffthepath.co.uk

Regular User
Im sure the tees one never had a lift before?
flickr
W

Regular User
That ladder though

Speed said:
Im sure the tees one never had a lift before?
Click to expand...


wellingtonian said:
That ladder though

Every time I think of this bridge that comes to mind - the anti climb on it and all
Blurred Boundaries - 'busting Bristol wide open' - Louise 2012
SERVE CHILLED, LIKE SOMERSET​